Destination: Barcelona’s Renaissance Fira Hotel
Jean Nouvel cultivates a tropical paradise in the heart of a 27-storey skyscraper in the Catalan capital. Plus, Llibreria del Born, an of-the-moment bookstore with an eye on history. 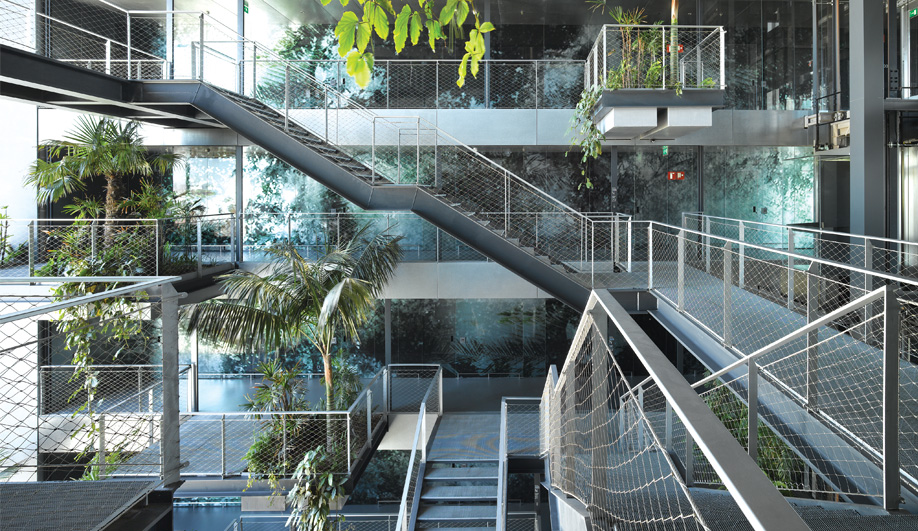 In the central atrium, stairs and bridges connect to the guest rooms in the hotel’s two towers, while canti­levered balconies support lush plant life.rn 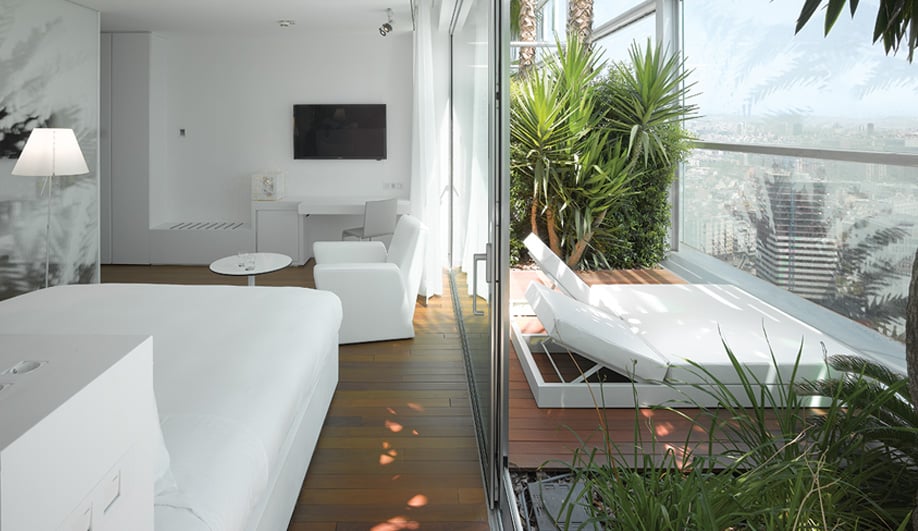 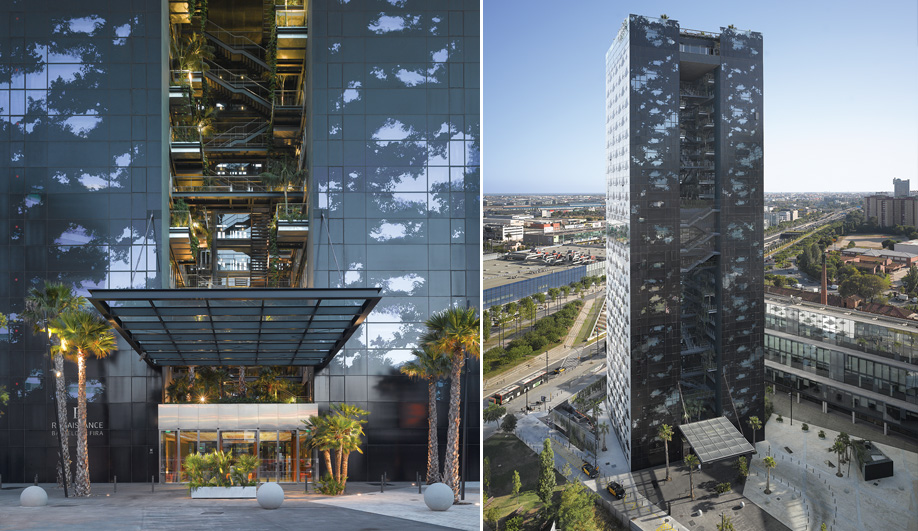 The northern glass facades are screen printed to evoke a jungle. 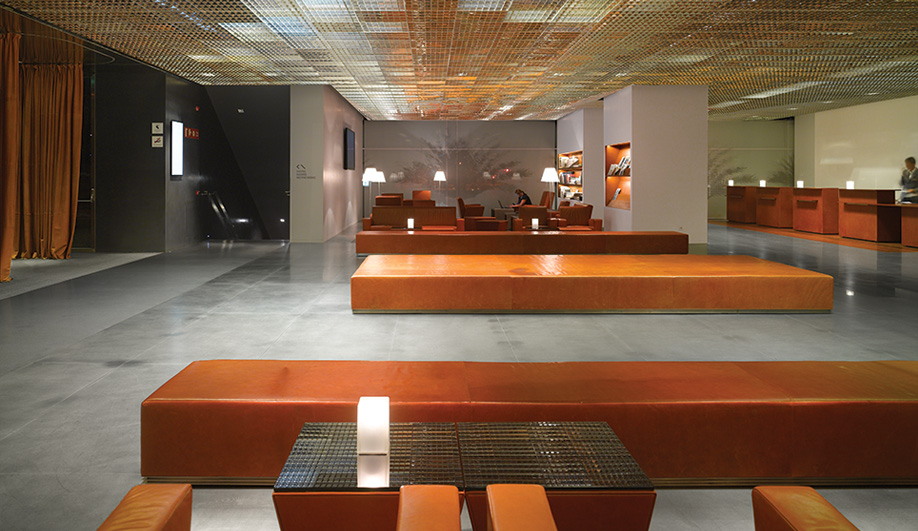 The lobby is typical of Nouvel, with metallic finishes on the ceiling and blocky furnishings in a contrasting orange. 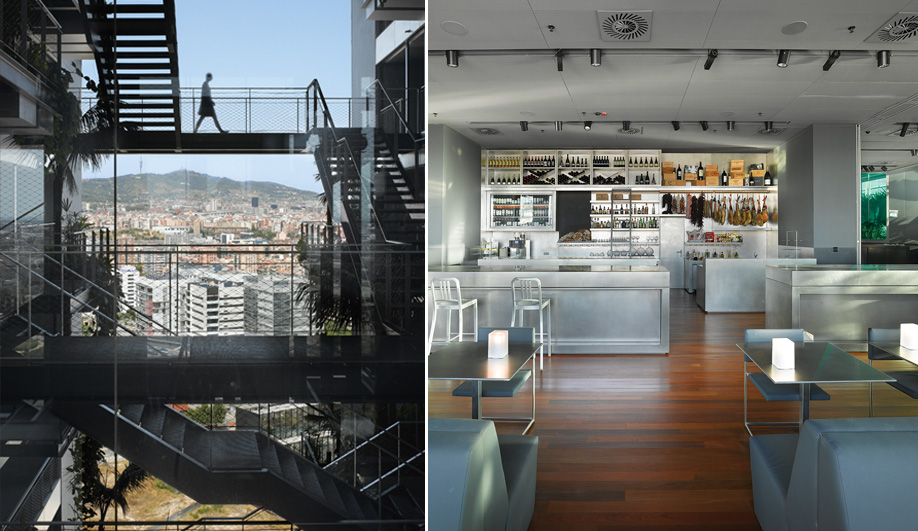 Left: Panoramic views of the city and its mountainous backdrop spread out before guests as they make their way to the hotel rooms. Right: Further metallic treatments in the understated restaurant. 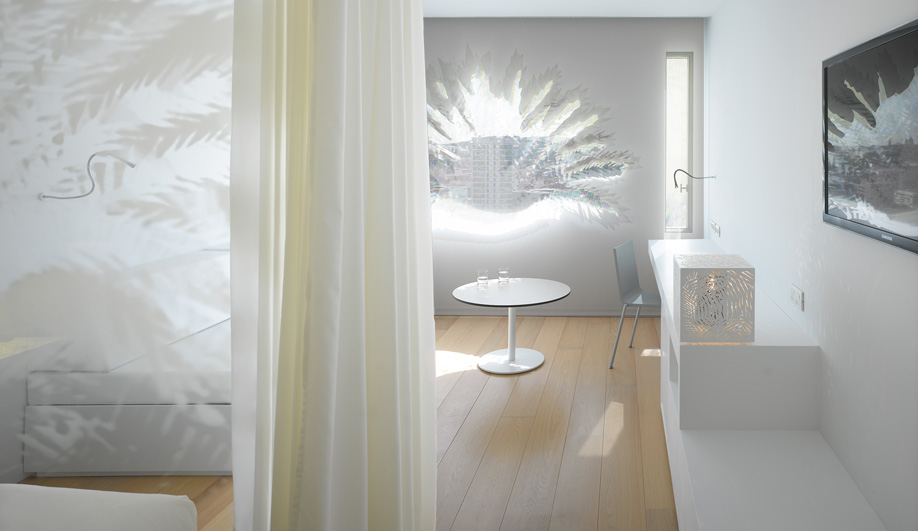 Palm-shaped cut-outs in the concrete and glass facade enhance the ethereal feel of the all-white guest rooms.

The elevator soars up the Renaissance Barcelona Fira Hotel, and my knees buckle beneath me as hundreds of palm trees and plants zoom past the glass cabin. What might be the fastest lift in the city torpedoes up a 27‑­storey atrium nestled between two parallel towers. Criss-crossing the vertiginous central volume in all directions, stairs, bridges, and canti­levered terraces filled with cascading greenery evoke both the Hanging Gardens of Babylon and Piranesi’s Carceri.

As if the real thing were not enough, the architects – Jean Nouvel, working with Ribas & Ribas Arquitectos as well as landscape architect Manuel Colominas – have cultivated the lush vegetation into a recurring motif that can be seen from afar. Rising on the major thoroughfare of Gran Via, near the Fira trade fair grounds between the airport and the city centre, the 110‑metre-tall business hotel (part of the Marriott brand) is wrapped in leafy patterns. On the two towers’ north facades, black silkscreened glass creates a jungle effect; and the skyscrapers’ flanks are composed of cast concrete panels, carved with palm fronds and clad in white glass that plays up the theme.

Housing 357 rooms, the two slabs connect at three levels: the lobby, the 14th-floor restaurant, and the rooftop viewing deck, with its 21-metre-long swimming pool. I exit the elevator at one of the upper floors and head to my room – which is all white, with fronds etched onto the glass bathroom partitions, and those bursts of palm at the windows – along a walkway overlooking the awesome atrium that descends below. Protruding well beyond the already cantilevered balcony walkways, steel planters on each storey support nearly 300 mid-size palm trees of 10 varieties, together with 30 other plant species from all over the world.

“The biggest challenge was finding the most appropriate species, ones that could thrive in relatively subdued daylight and occasional windy, cool weather conditions,” says landscape architect Manuel Colominas, principal of the Barcelona firm Factors de Paisatge. The resilient kentia palm is abundant in the atrium, where sunlight doesn’t penetrate much, and the Mexican fan palm appears in the private gardens of the luxury suites on the 26th floor.

While the atrium forms part of an architectural promenade aimed at “immersing hotel guests within a world of vegetation,” says Colominas, in certain other areas, such as the mid-level restaurant and the luxury suites, guests can get much closer to the plants. A double-skin corridor along the facade encases the gardens, so guests can sunbathe amid the palm trunks.

The architects’ intention in planting a vertical garden through the centre of the building was to capture daily and seasonal shifts in light and climate. In doing so, they have managed to eschew the dull anonymity of the typical double-loaded corridors in most hotels, as well as the contrived interior artificiality of atrium hotels, such as those by John Portman.

This project also differs from many others that incorporate plant life – including the low-slung Pérez Art Museum Miami by Herzog & de Meuron and the Bosco Verticale in Milan by Stefano Boeri – by making an open courtyard integral to the plan. In this way, the architects “interiorize” the outdoor garden, in the ancient tradition of Mediterranean courtyard houses, effectively reinventing the high-rise hotel building type. The central void’s perimeter displays a structural bravado heightened by the sensation of vertigo it provokes. Furthermore, it draws attention inward toward the foliage, while casting it outward through a tall vertical opening that frames the Tibidabo mountain, which dominates the city below.

Where to shop in Barcelona: Llibreria del Born bookstore 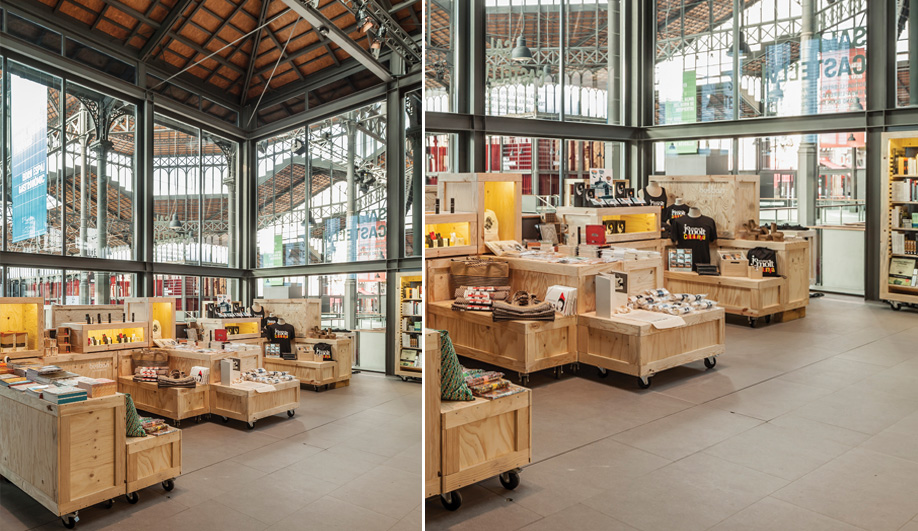 The latest Bestiari bookstore in Barcelona might come across as shabby-chic, but it has a noble purpose: it upholds Catalan national identity and history – both in the books it sells out of wooden crate displays, and in its very location. Designed by Barcelona architect Jorge Pérez Vale, the shop occupies a glass and steel pavilion along one edge of Barcelona’s first cast iron structure, a market hall built in the 1800s above the ruins of a Catalan neighbourhood destroyed by the Spanish monarchy. The hall was recently transformed into a cultural centre dedicated to raising awareness about the tricentennial of this military attack, the 1714 Siege of Barcelona at the end of the War of the Spanish Succession.

Also known as Llibreria del Born (named for the vanquished city below), this location boasts a collection of titles that includes La Ciutat del Born, by Albert Garcia Espuche, and Albert Sánchez Piñol’s Victus Barcelona 1714. The books are displayed inside and
on top of mobile wooden crates supplied by a packaging company; some titles are stacked loosely and informally, a reference to the mercantile shipping and trade that once thrived in this seaside neighbourhood. LED fixtures concealed inside the crates subtly illuminate the books, as well as the store’s logo, the branding and lighting by the studio Roseta y Oihana working in harmony.