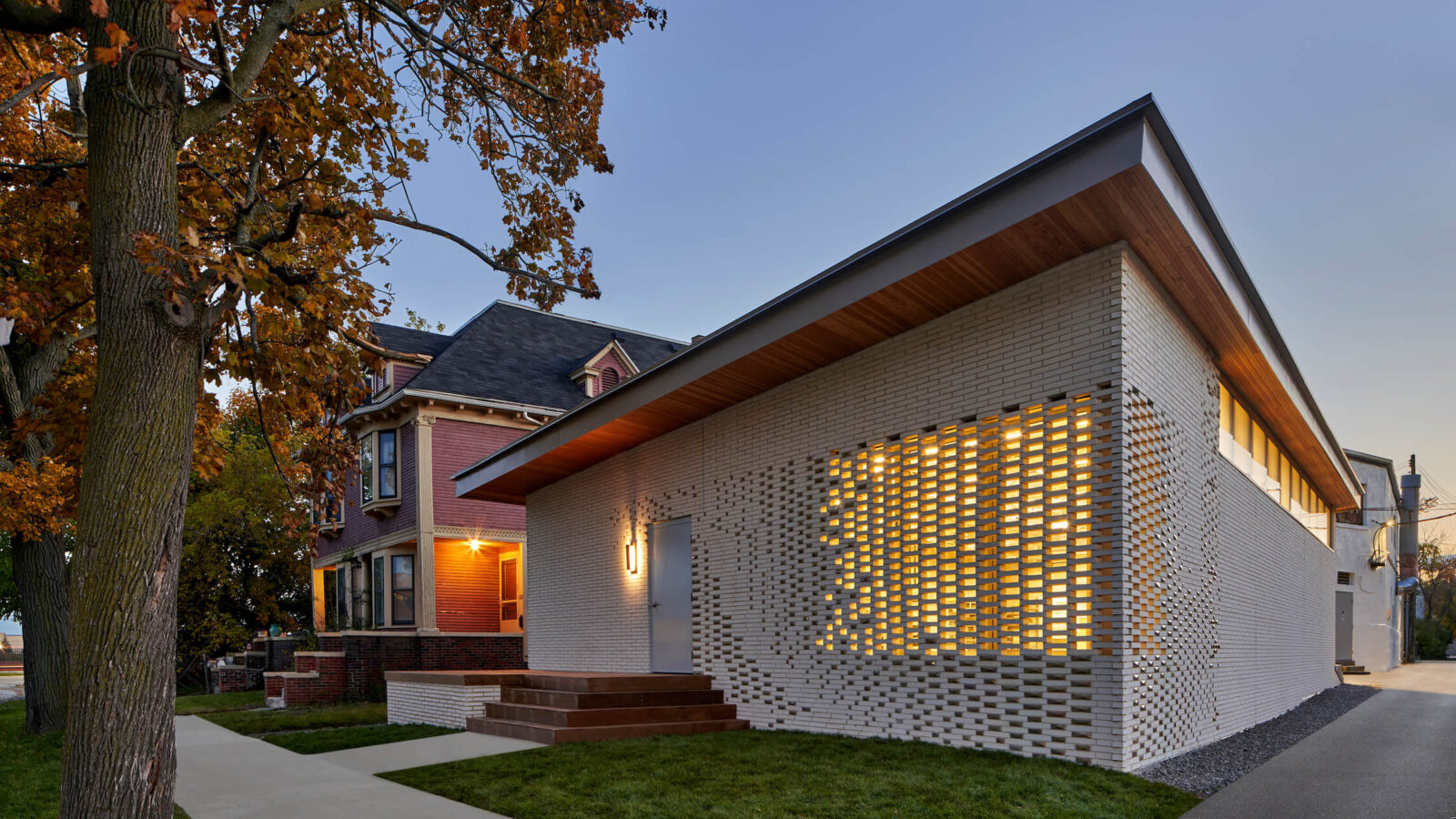 After over a century in a Tudor Revival-stye mansion, Pewabic Pottery gracefully expands into an adjacent parking lot.

Pewabic Pottery is a Detroit institution. Since its 1903 founding in the city – the first and (so far) only UNESCO-designated City of Design in the U.S. – by artist Mary Chase Perry Stratton and her business partner Horace James Caulkins, the pottery and ceramics studio has been producing architectural tiles, vessels, lamps and other decorative items for both public and private uses. Particularly renowned for its oil slick-like iridescent glazes, Pewabic was a major Detroit contributor to both the arts and crafts movement and American Craftsman style.

Shortly after starting out in a small carriage house, the studio moved into a 1907-built Tudor Revival-style mansion, where it still resides today. The building, by architect – and Mary’s husband – William Buck Stratton, was designated a National Historic Landmark in 1991. But after nearly 110 years in the space, the non-profit organization was feeling a little cramped and looking to expand. A fundraising campaign was initiated roughly two year ago and design plans were quickly in the works, helmed by inFORM Studio based just outside of Detroit proper in Northville, Michigan.

The new structure adds 232 square metres of space to Pewabic’s existing 929 square metres. Rather than try to match the Tudor Revival’s half-timbering and pitched roof, inFORM (working with Sachse Construction and Pewabic’s team) went with something decidedly more contemporary: a brick-clad squat rectangle with flat sloped roof. “It would have been inauthentic to try to match the original architecture and not true to the era this extension was designed in,” Shannon Schmehl, project leader at inFORM, says of the decision.

Situated on a former parking lot, the new building houses a spacious tile-pressing studio with an internal connection to the retail, demonstration and education rooms, offices, art galleries and fabrication area found in the original building. Inside, the space is quite raw – cinder block walls, exposed ductwork, concrete floors – but functional and light-filled thanks to rows of clerestories running along either side. The considered placement of the windows lets in daylight while maintaining the privacy of the artists working in the room; a translucent film on the glazing furthers the sense of seclusion and diffuses a softened glow. 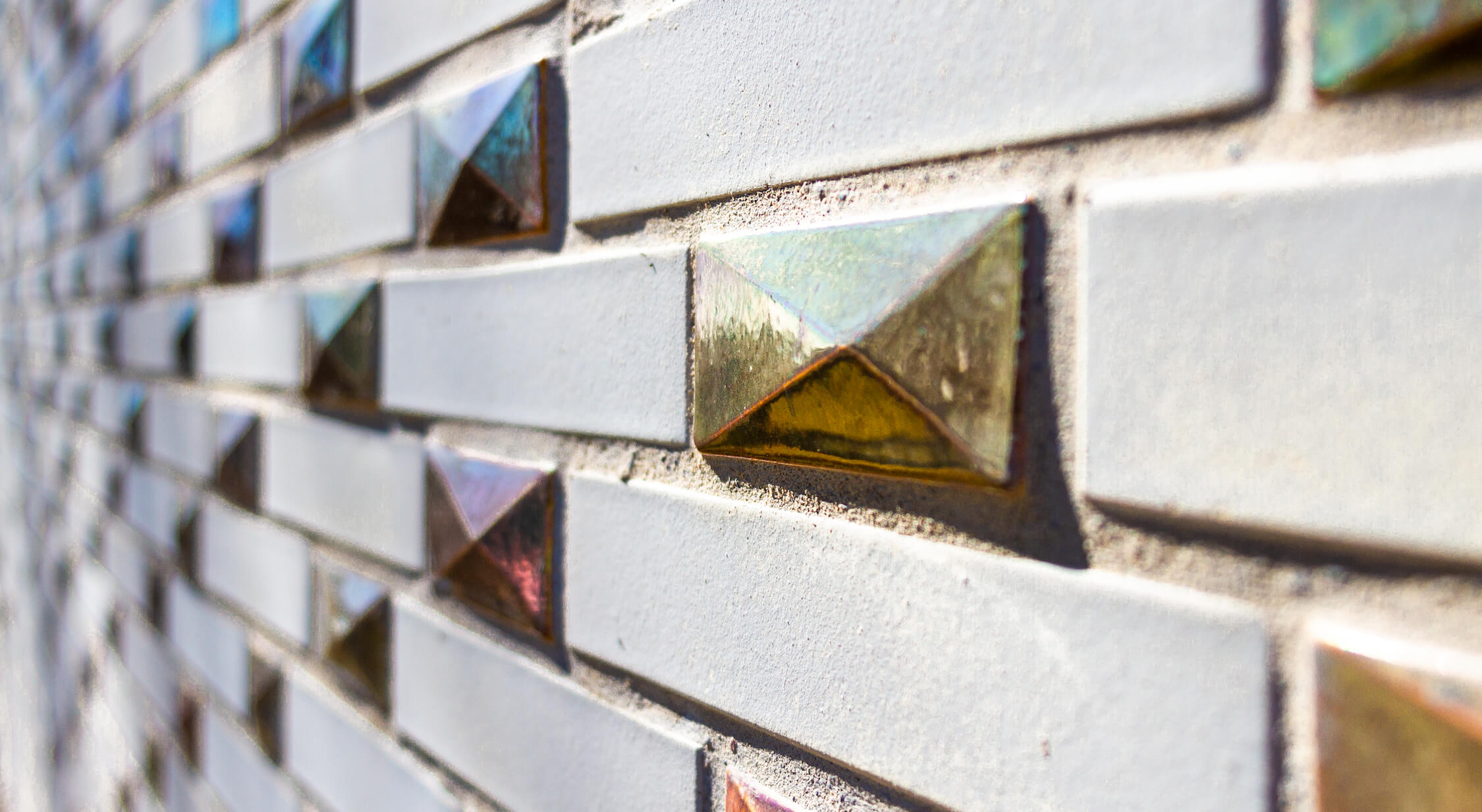 Along with sunlight, a major objective of Pewabic was access to natural ventilation. To that end, three large doors at one corner can be opened to allow fresh air to move through. It’s also here that a glimpse of the exterior can be seen – an intentional move to help establish a connection to the community through transparency: The doors are fronted by an external brick screen, a portion of the facade comprised of bricks and voids. “It was important to Pewabic to have a presence in and connection to the neighbourhood,” says Schmehl. “The glass-backed voids create a physical connection; people can see in and people can see out.”

Viewed from the outside, this connection to the community comes into full focus through a digitally designed section of the mostly unassuming flat white brick facade: Defining the street-facing east wall and wrapping slightly around the north is a feature that combines technology with handcraft. Comprising a mix of the traditional brick and custom 3D tiles interspersed with the seemingly random glass-backed voids, the patterned façade reveals obscured views inside the working studio. Using an algorithm, inFORM and the Pewabic artists devised a motif that is dedicated to the architectural tiles made inside. “We chose the white bricks to create a blank canvas, so to speak, that would show off the artistry of the Pewabic tiles,” says Schmehl.

The artistry is most prominently showcased in the faceted tiles the ceramics artists conceived specifically for the building, adding a layer of intricacy and movement to the architecture. The 955 differently sized tiles were glazed in a traditional Pewabic gold finish, but the angular construction gives each one a new expression and depth. Combing technology and tradition, the studio addition is a physical reflection of Pewabic’s long-standing connection to the city it calls home.

After over a century in a Tudor Revival-stye mansion, Pewabic Pottery gracefully expands into an adjacent parking lot.