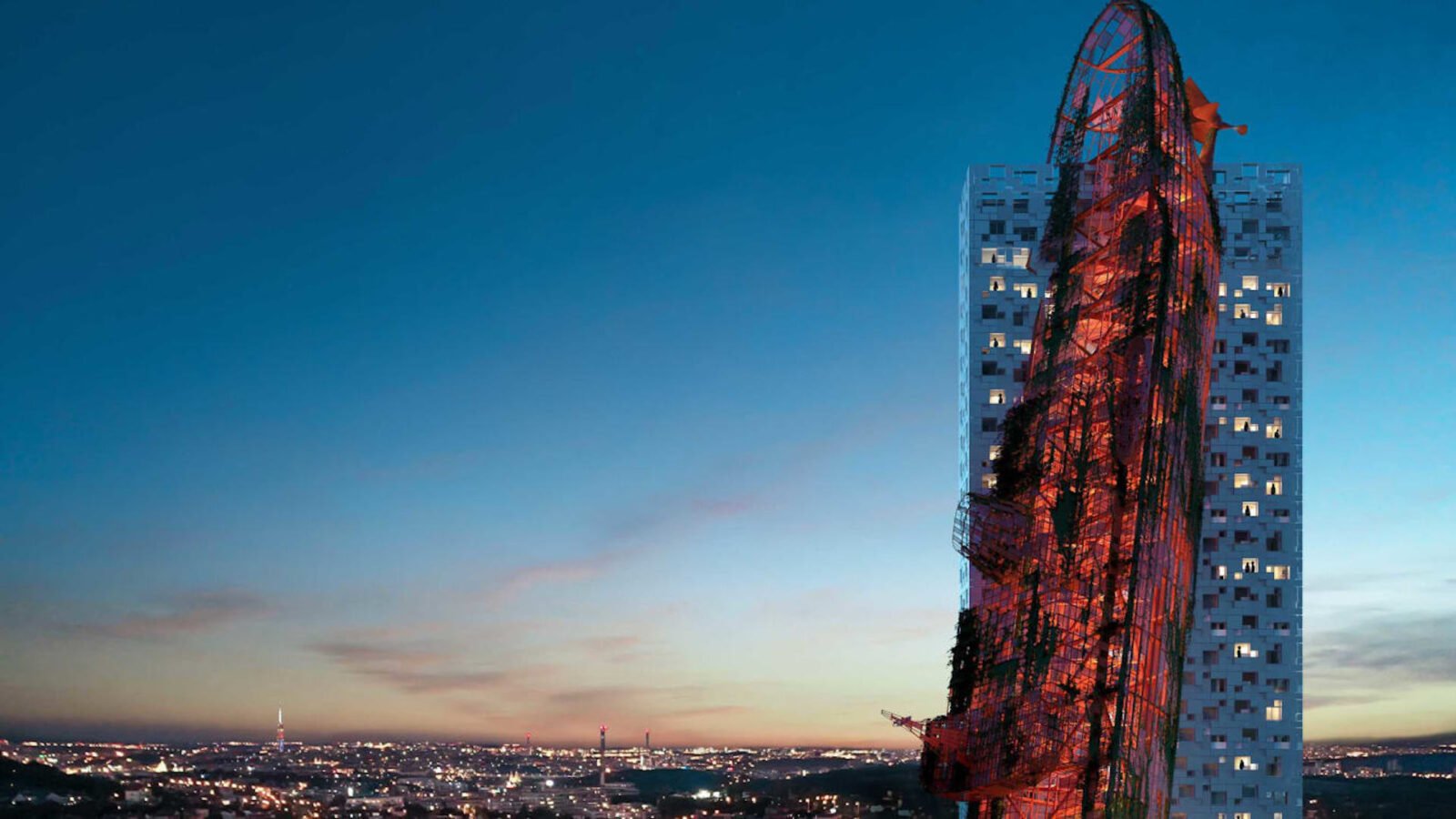 Over the last 30 years, the controversial artist has transformed the face of the Czech capital – and generated international headlines.

It will be the Czech Republic’s tallest building. It will also feature a 135-metre sculpture of a wrecked ship leaning against its side. What gives? The audacious design is the work of sculptor David Černý, who is also proposing, for a site closer to central Prague, an elevated bridge between two buildings that will simulate a 19th century train wreck. The Czech artist explains his ethos thus: “I just enjoy pissing people off.” Fortunately, he has a talent for it.

From a Brussels installation crudely depicting European national stereotypes to a theatrically elongated middle finger floating down Prague’s Vltava River, his installations have reliably spurred controversy, all while shaping public space – and public consciousness – across Czechia and around the world. But the cheap provocations belie a more thought-provoking oeuvre: At its best, Černý’s work probes the troubled foundations of national identities and political orders.

From the outset, Černý was a renegade. In the wake of Czechoslovakia’s 1989 Velvet Revolution and the gradual collapse of the Soviet Union, the young artist assaulted the old order with a guerrilla stunt. On an April night in 1991, Černý defaced the Monument to Soviet Tank Crews, painting the prominently displayed World War II tank a bright shade of pink while erecting a sculpture of an upturned finger – more than hinting at a crude gesture – atop the armoured vehicle. Černý was swiftly arrested for “hooliganism,” with the Soviet government immediately moving to re-paint the tank army green.

While the initial Pink Tank installation was short-lived, its aftermath proved a watershed moment for the Czechoslovakian independence movement. Dissident artists and politicians united to re-paint the tank pink, while the reformist local parliament subsequently revoked its Soviet-era status as a protected monument. Suddenly, Černý’s student protest was the fulcrum of a national insurgency.

By the turn of the millennium, Černý’s public installations proliferated across the Czech capital. Following the collapse of the Soviet Union, the artist manifested the vanguard of a post-communist zeitgeist. Brash, irreverent and unmissable, Černý’s works epitomized a spirit of posthumous rebellion against the stern grey monoliths of a bygone empire.

The Žižkov Television Tower is a case in point. Looming over the Czech capital with high-tech indifference, the tower was built in the last days of Soviet rule from 1985 to 1992. Unsurprisingly, it immediately became the most hated building in Prague (imagine a Tour Montparnasse built by Soviet occupiers). But in 2000, Černý transformed the structure, attaching 10 figurines of fibreglass babies to its steel tubes. Cute yet grotesque, the Miminka installation unravels the tower’s faceless monumentality with a gaggle of faceless infants. In lieu a cheerful cosmetic intervention, Černý’s sculptures reflect a poignant sense of disoriented liberation. (Twenty years later, it is also tempting to interpret the featureless figures as nascent embodiments of an era that promised “the end of history.”)

In addressing the Soviet empire and its aftermath, Černý’s early works lend themselves to obvious – even heroic – interpretation. But while Pink Tank stood at the locus of revolution, the provocation is one that happened almost 30 years ago. In the decades since, newfound social liberalism and accelerating global capitalism have shifted the politics of provocation.

Piss is displayed in front of the Franz Kafka Museum in Prague.

What to make of a statue of a hanging Sigmund Freud? Or the pair of figures urinating onto a map of Czechia? Or the giant purple middle finger gently drifting along the Vltava River? 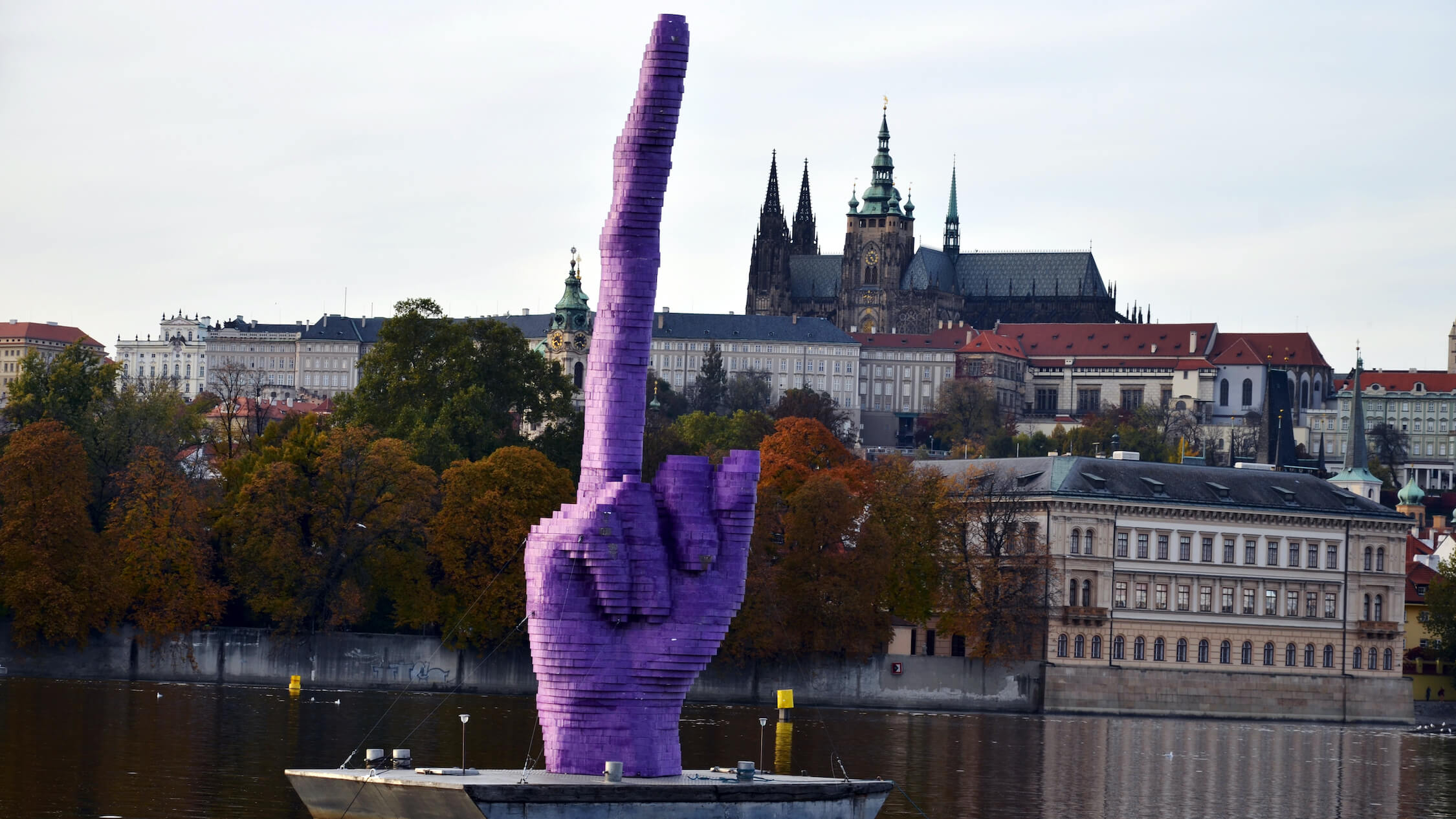 On its face, much of Černý’s recent oeuvre evokes a sort of South Park vulgarity – or, in the artist’s own words, a simple desire to piss people off. And in 2009, the world got more pissed off than ever. That year, Czechia held the rotating presidency of the Council of the European Union, with the country invited to mark the occasion by installing a public art piece in Brussels. Černý was the man for the job.

The result was an international scandal. Dubbed Entropa, the massive installation resembles the parts of a model kit, with the 27 parts each depicting a map of an EU member state. Italy is represented by a soccer pitch, its players standing idly and cupping their genitals. France is draped in a banner that simply reads “GRÈVE!” (“STRIKE!”), while the map of Germany is a string of autobahns vaguely resembling a Swastika. Romania? A Dracula-themed amusement park. Bulgaria? A series of interconnected squat toilets. (The Czech map, meanwhile, used an LED screen to display embarrassing quotes from then-President Václav Klaus.)

The controversial map of Bulgaria…

… was covered by a black curtain following an outcry from the ambassador.

The international reaction was succinctly summarized by a New York Times headline: “Art Hoax Unites Europe in Displeasure.” In particular, the depiction of Bulgaria was protested by the Balkan country’s ambassador to the EU, with the sculpture subsequently covered by a black curtain. To make matters worse – or, depending on your politics, better – Černý’s promise to create the piece in collaboration with other European artists was revealed to be a hoax: the Czech made up a series of fictional names whom he listed as Entropa‘s co-creators.

As the spectacle of Černý’s hoax dominated the discourse, the nuance of the art itself was largely lost. In depicting the EU as a disparate kit of parts, Entropa hits out against superficial notions of European unity, while the crude stereotypes are themselves a riposte to the vapid celebrations of nationalism that often permeate into public art. Černý’s provocations rely on blatant exaggeration, which invites us to question whether we ought to believe grandiose national mythologies of any sort in the first place.

Černý is no more sparing of his Czech homeland. In Prague’s Lucerna Palace, Černý’s Statue of St. Wenceslas Riding a Dead Horse literally turns national mythos on its head. Here, the legendary Czech king is shown suspended in the air, riding an overturned horse, reducing him to a farce. But is Černý’s depiction fundamentally more absurd than all the statues depicting the king as a saint?

While Entropa remains Černý’s most high-profile controversy, it is far from the only. In 2005, for example, Černý unveiled Shark, a parody of Damien Hirst’s The Physical Impossibility of Death in the Mind of Someone Living. In lieu of Hirst’s preserved tiger shark, however, Černý’s formaldehyde tank houses a life-size Saddam Hussein floating dead in his underwear. Whatever it meant, it angered many. (The work was banned from being exhibited in both Poland and Belgium).

More recently, the artist has turned his attention to Prague’s urban development. In 2019, Černý made headlines again, this time via a partnership with developer Trigema and architects Black n’ Arch. Dubbed Shipwreck Tower, the planned high-rise is set to depict a massive rusting ship colliding with a 135-metre tower. It’s a brazenly inelegant design. As reported by Dezeen, however, the project is intended “to serve as a stark reminder of climate change.” It’s difficult to accept the statement at face value, given both the project’s bombastic – and carbon-intensive – scale and Czechia’s landlocked geography. Nonetheless, in depicting an apocalyptic scenario, Shipwreck Tower upends the conventions of developer-commissioned public art, conjuring mischievous horror in lieu of banal beautification.

A rendering of the Shipwreck Tower, proposed in suburban Prague.

Last month, Černý and Black n’ Arch unveiled another audacious scheme, this one inspired by the 1895 Montparnasse derailment in Paris. Entitled Trainwreck, the proposed elevated walkway in Prague will take on the appearance of a train crashing between two buildings. Just as Shipwreck Tower playfully interprets an impending global catastrophe as a high-rise accoutrement, Trainwreck memorializes a historic disaster with levity. These are outlandish – almost garish – concepts, yet they slyly push the medium of public art to offer a fuller reflection of the world. If souvenirs of national heroes and grand battles permeate the public realm, why not disasters? In this way, Černý’s view of art (and history) resists hagiography, revelling instead in a sense of discomforting spectacle – even if it all turns out to be a hoax.

A rendering of the Trainwreck passageway.

Today, Černý is as much a part of the establishment as any contemporary Czech artist. Nearly three decades after the fall of the Soviet Union, the one-time “hooligan’s” works are a ubiquitous presence throughout Prague. But as the country’s political and social landscape transformed, so did the art, evolving from principled civil disobedience to more inscrutable critiques of life under late capitalism. Along the way, Černý has created art that is challenging, thought-provoking and assertive.

And he’s ruffled more than a few feathers. Anger is the main sentiment in the comments section of Dezeen’s take on Shipwreck Tower: “A silly gimmick, and an ugly one at that.” “This is a joke, isn’t it?” “Shipwreck or dumpster fire? There’s silly, there’s stupid and then there is this.” Reading through it all, it’s hard not to imagine David Černý cracking a smile.

Over the last 30 years, the controversial artist has transformed the face of the Czech capital – and generated international headlines.