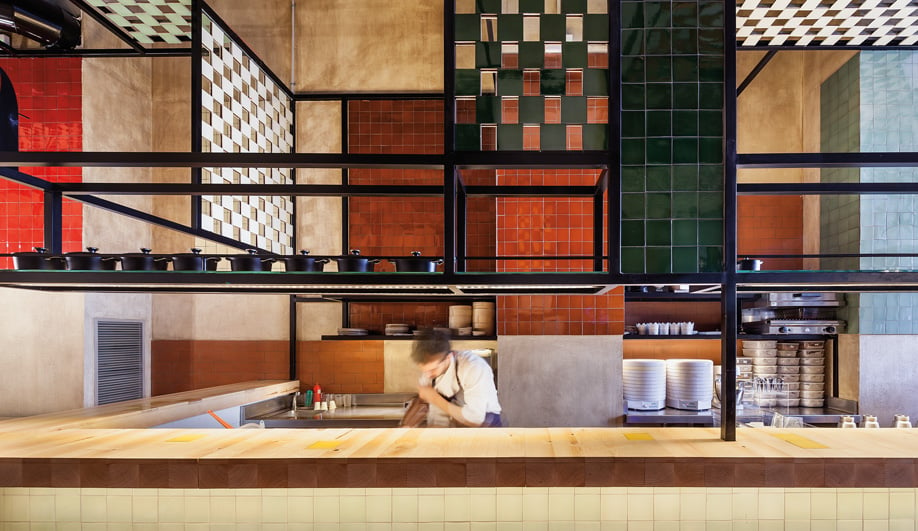 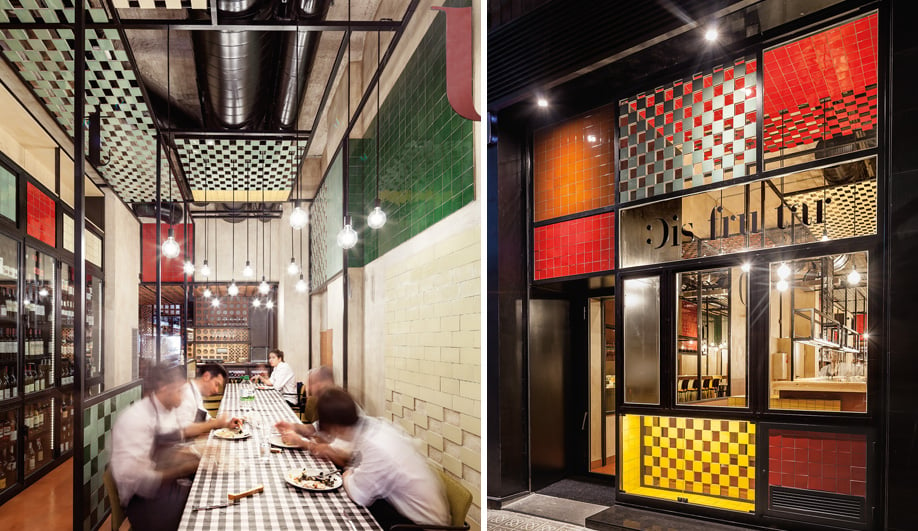 Left: The kitchen dining area, with its gingham-covered communal table, is used by staff and large groups. Right: Disfrutar’s gastro-bar faces onto a busy street just steps away from the renovated Ninot Market. 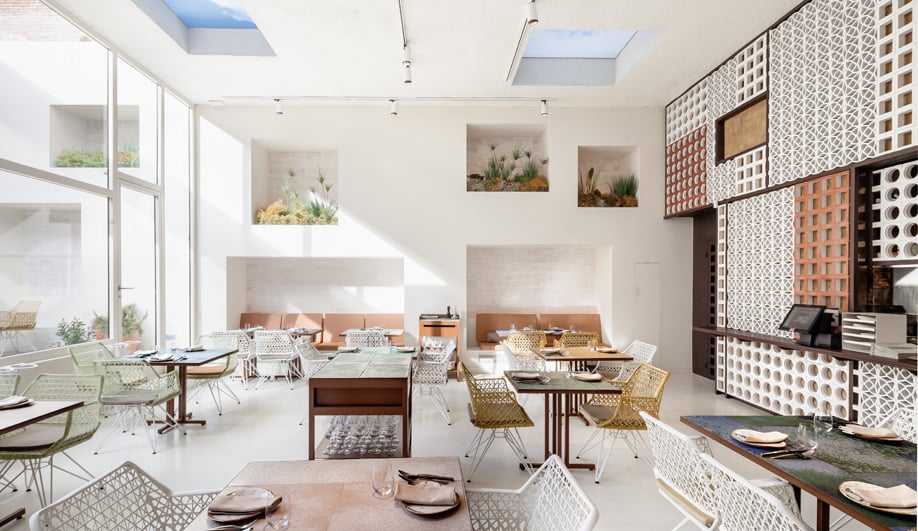 The bustling kitchen gives way to a bright, airy dining room that leads to a spacious patio. Chairs by Barcelona manufacturer Lobster’s Day. 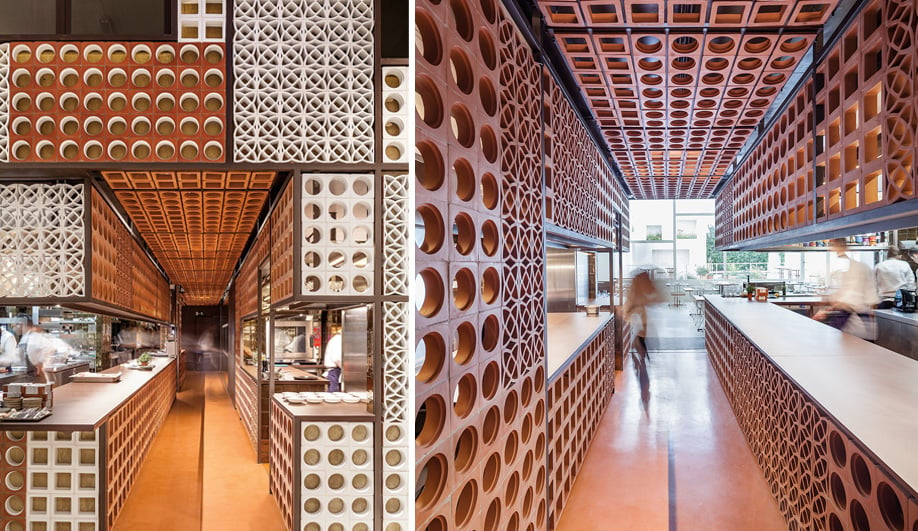 Left: To reach the main dining area, guests traverse a narrow, tile and steel-clad corridor between the open kitchen and the prep station. Right: El Equipo Creativo used red and white lattice tiles, sourced from Cerámica Ferrés, to cover the walls and ceiling. 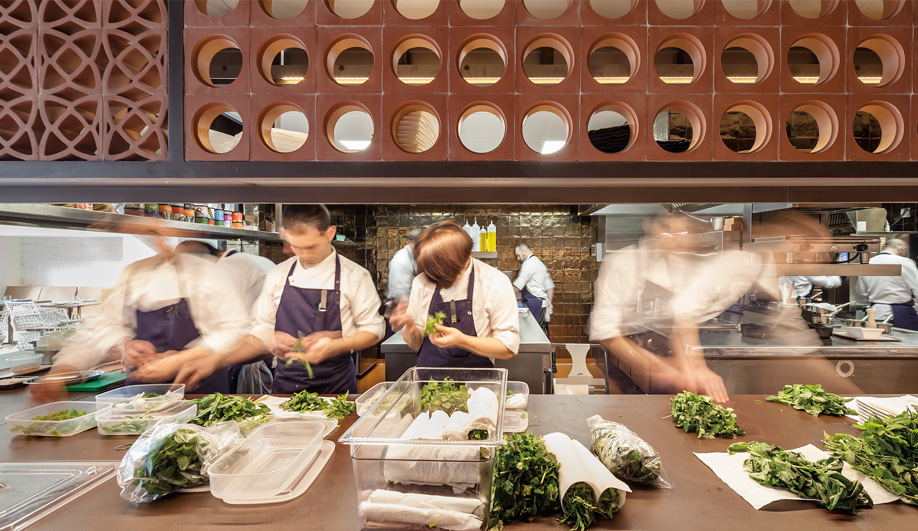 For the new molecular gastronomy restaurant run by ex-El Bulli chefs, El Equipo Creativo gives the interior a humble – yet eclectic – look with walls made of ceramic tiles and exposed grids.

Disfrutar means “to enjoy” in Spanish. It’s an appropriate name for a restaurant that encapsulates several aspects of the original modernist city plan for the area. The Eixample district of Barcelona was originally mapped out in the 1850s by urban planner Ildefonso Cerdá, but in its built form it never turned out quite as he envisioned.

Had his scheme been followed, Disfrutar would today be located inside a building half as tall and not nearly as deep. Significantly, it would also back on to a public courtyard garden and be enclosed on only one or two sides – an urban fabric that Cerdá understood as an ideal way to provide Barcelonians with the health benefits of “sun, space and green.”

It’s never too late to attempt to right a wrong, however. Local firm El Equipo Creativo seems to have taken Cerdá’s vision to heart when it designed Disfrutar. The architecture studio, run by Oliver Franz Schmidt, Natali Canas del Pozo and Lucas Echeveste Lacy, has carved an outdoor patio from the middle of a city block to create an adjoining dining room defined by natural light and spacious exterior views.

“We differentiated two spaces or environments in the plan,” the firm has stated about the project, which has already scooped up numerous international design awards. “There is a more urban and active space towards the city and the street, where the bar and winery are located, and a more natural and relaxed space towards the interior patio and terrace, where the main dining room is situated.”

The colourfully tiled front bar and the winery belong to busy Villarroel Street, directly across from the Ninot Market, which was recently renovated by architect Josep Lluís Mateo; Cerdá had designated the market as the heart of the neighbourhood. The patio and the main dining room, by contrast, are sanctuaries of calm. The two opposite realms are phys­ic­ally separated by a large, busy open kitchen that must be traversed via a dramatic corridor lined on all sides in perforated ceramic partitions. Here, the varied grids of solids and voids vaguely recall the figure-ground patterns of different cities.

The multicoloured tile and terracotta screens veil the served from the serving spaces, while still permitting light and glimpses to penetrate, just as, at the urban scale, Cerdá’s plan sought to separate public greenery from streets via semi-open perimeter blocks.

The interior gradually becomes imperceptibly wider toward the back, making the main dining room – which seats up to 50 at various-sized tables – suddenly appear vast and spacious upon arrival through the kitchen corridor. Five-metre-high white side walls, incorporating window-sized niches for plants, flow seamlessly out to the patio, creating visual continuity between the interior and the exterior.

This sense of surprise echoes the dishes served, which at first glance appear to be typical Mediterranean tapas, but upon first bite reveal something completely different and unexpected in terms of aroma, taste and texture. Each dish is a unique work of molecular gastronomical art à la chef Ferran Adrià, with whom Disfrutar’s chefs have collaborated.

While El Equipo Creativo may not have been consciously tapping the urban plan of a century ago, the design delivers sensual pleasures at a highly refined scale. Just as Cerdá envisioned, it concentrates the sun, space and green for metropolitan Barcelona within a layered, screened and surprising interior.