Top 10 Exhibits at the Venice Biennale
On June 7, the 15th edition of the international architecture exhibition opened with 66 countries participating in the event. Here are 10 standout exhibits on view in Venice until November 23, 2014. 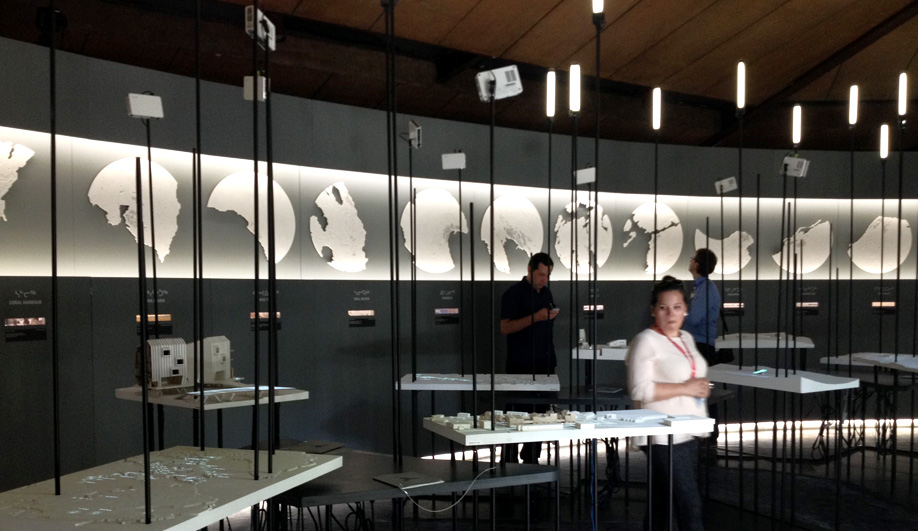 This year the curatorial role of the Venice architecture biennale has gone to Dutch architect Rem Koolhaas, one of the most provocative architects and thinkers of our times. Koolhaas’s books are as famous as his buildings, and for many architecture students such seminal volumes as S,M,L,XL – first published in 1995 and co-authored with Bruce Mau – are essential reading.

It’s not surprising, then, that Koolhaas has taken this history-making opportunity to create an exhibition steeped in research and a large amount of looking to the past to inform what will shape architecture in the future.

In fact, very few name-brand architects have representation at the biennale. The overarching theme is Fundamentals, a one-word exhibition title that embraces two components: how modernization has impacted cities from 1914 until now, and how we can re-examine the basic elements of building, including walls, floors, ceilings and stairs. In Rem’s world, the components that make up the built environment are what matter now. The tagline of the event says it all: this is a show about “architecture, not architects.”

Here are 10 standout exhibits from one of the most enriching explorations of architecture in a long while. At least two full days are needed to get a handle on the biennale, and it is well worth the time. 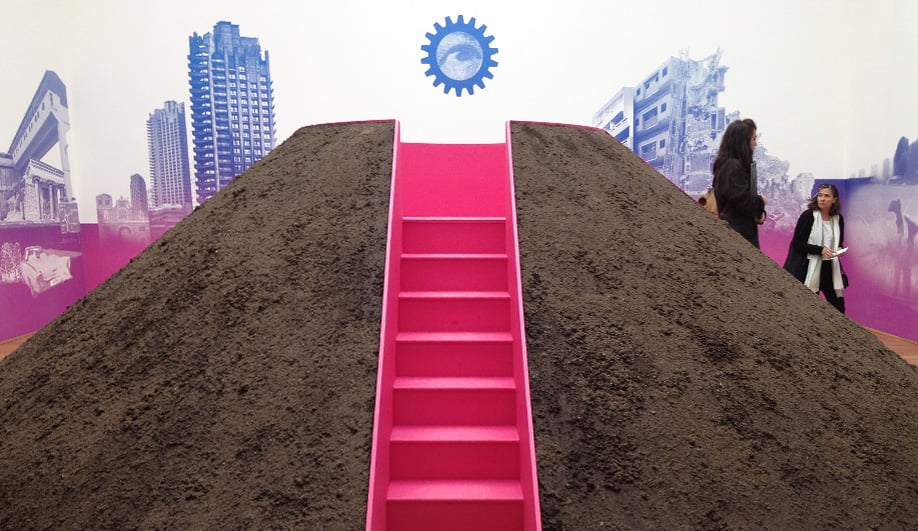 1 British Pavilion
FAT Architecture and Crimson Architectural Historians have provided one of the most impressive entrances at the exhibit. The hot-pink, dirt-covered mound sets up the British exhibition’s underpinning theme of unpacking the nation’s longstanding romanticism with ruins as a symbol of tearing down the past to make way for a new kind of idealism. The exhibition presents displays that link the country’s popular culture, including its anti-establishment music, its artists and poets, and films like Stanley Kubrick’s A Clockwork Orange, to the successes and failures of urban architecture and design. 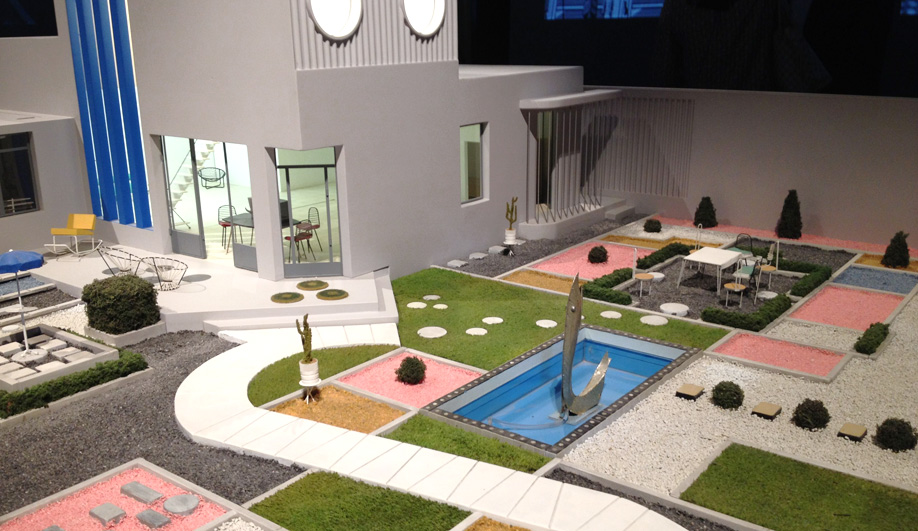 2 French Pavilion
The French Pavilion included a model of Ville Arpel, which was featured in Jacques Tati’s famous Mon Oncle, a 1958 film that playfully dramatizes the pitfalls of minimalist design while also revealing a darker side of modernism’s social alienation. Curator Jean-Louis Cohen paired Tati’s comical critique with a montage of clips from Jean-Luc Godard films, and a documentary on Drancy, a massive housing complex outside Paris that was built in the 1930s with bunker-ish features. Its notoriety as a failed attempt at mass housing became all too real when the Nazis took it over in 1940, converting it into a concentration camp.

3 Canadian Pavilion
Arctic Adaptations, by Lateral Office of Toronto, won a Special Mention Golden Lion award for Canada. The exhibit maps the geography of Nunavut, the country’s youngest and largest territory, inaugurated in 1999. To represent its vastness and its sparse population, the exhibit recreates the region’s 25 communities and every single structure within them, arranged on a series of white Corten disks. Each Nunavut building is carved out of soapstone. 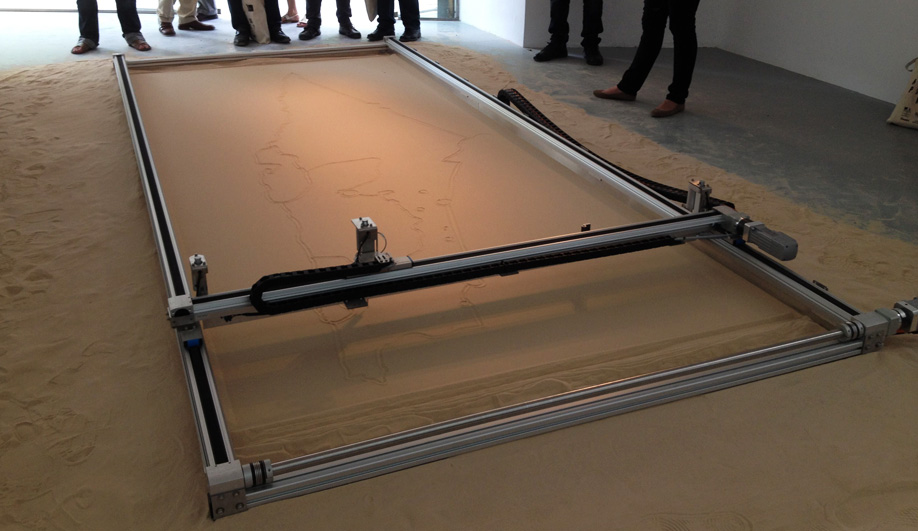 4 Israeli Pavilion
Urburb is a term coined to describe Israel’s particular kind of urban development history, which is neither urban nor suburban, but a combination of early 20th century garden cities, mid-century social housing and generic high-rises that have gone up over the past two decades. At the pavilion, three 3-D printers continuously map out in sand and then erase the changing shape of the country’s building evolution over the past 100 years. 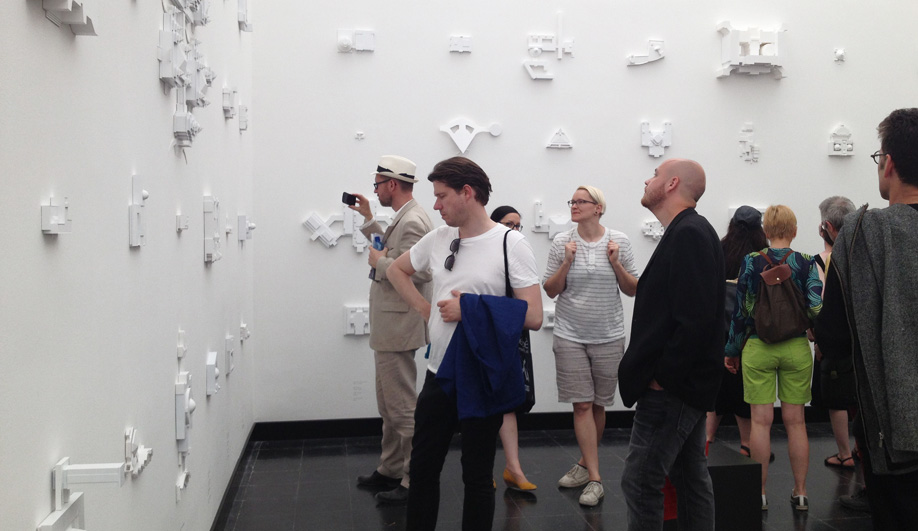 5 Austrian Pavilion
Austria devoted its all-white pavilion to the most powerful houses in the world: parliament buildings. Replicated at a 1:500 scale, 196 national headquarters are laid out in a grid from floor to ceiling, with the labels of which building belongs to which nation written in tiny type at the base of the wall. Curators Christian Kühn and Harald Trapp are keen to have visitors draw their own observations on what the display might reveal before letting the details inform their view. It’s interesting to see which nations prefer their parliamentary centres to be anti-monuments, while others consider big architecture and ornamentation synonymous with power. 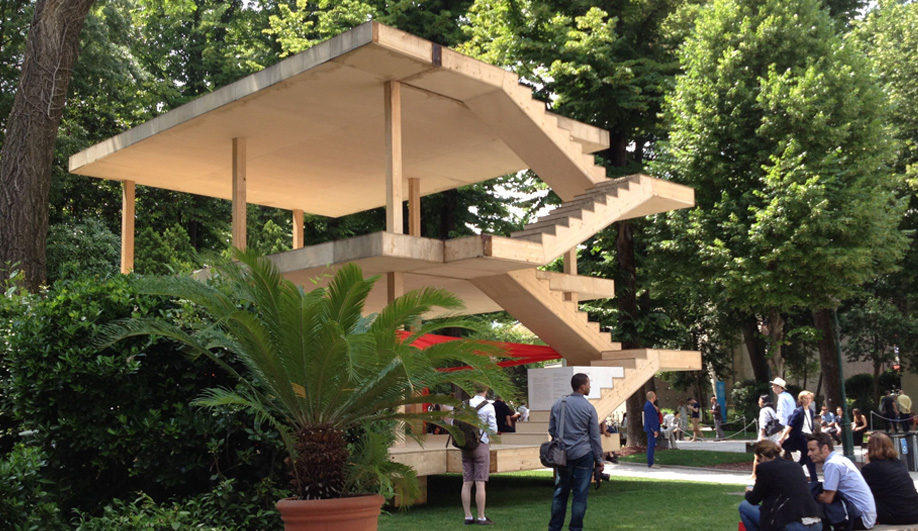 6 Elements of Architecture
This 1:1 model replicates Le Corbusier’s Maison Dom-ino, a housing prototype originally designed in 1914 as a solution to Europe’s housing shortage, but which was never realized. The model is located outside the entrance to Rem Koolhaas’s Elements of Architecture exhibit, and serves as the starting point to the theme of the biennale: exploring the impact modernism has had on architecture over the past century, from 1914 to now. 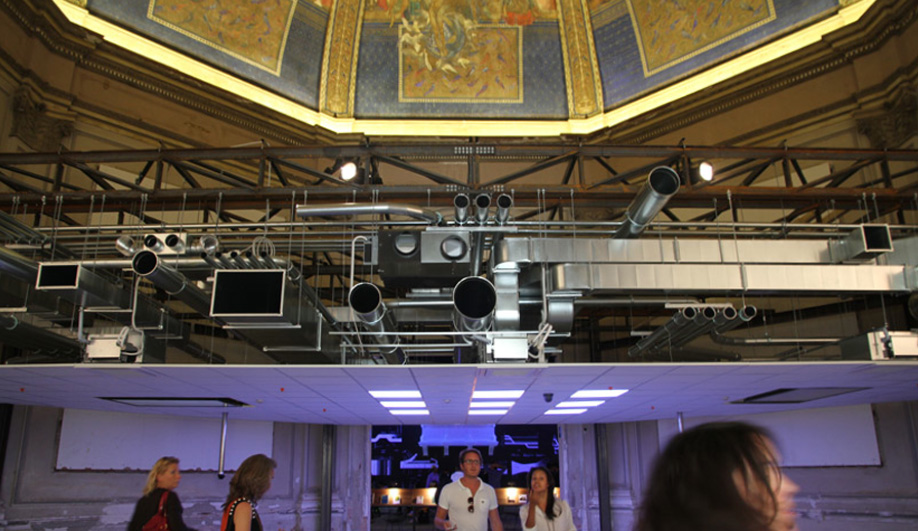 7 Elements of Architecture: Ceilings
Koolhaas’s Elements of Architecture exhibit unpacks 15 elements of a building, such as walls, ceiling, windows and floors, and presents them in connecting rooms, similar to chapters in a book. The exhibition begins dramatically with an installation that layers two ceiling types from different eras – one is a projection of a recently restored dome originally painted by Galileo Chini in 1909, and below that a drop ceiling typically found in modern-day office environments with its inner ductwork and sprinkler systems exposed. 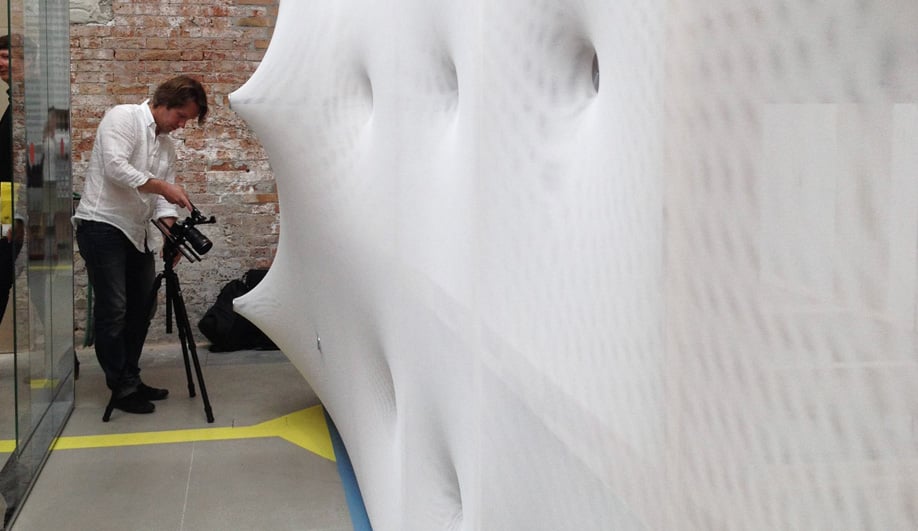 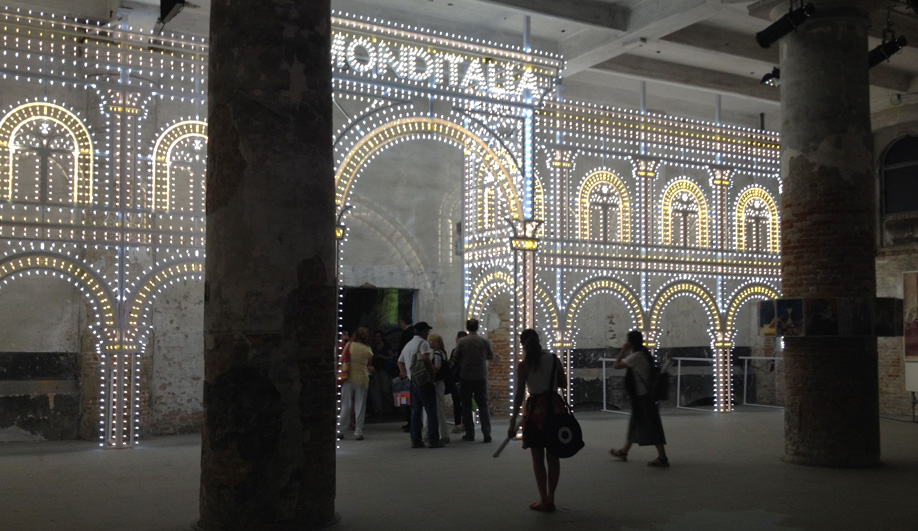 9 Monditalia exhibit at the Arsenale
The other Koolhaas-curated exhibition at the Arsenale takes visitors through Italy’s rich cultural history, with displays that explore not only architecture but also dance, film, theatre and music. The show opens with an illuminated façade made by Swarovski that dramatically contrasts the Arsenale’s red brick and column construction. 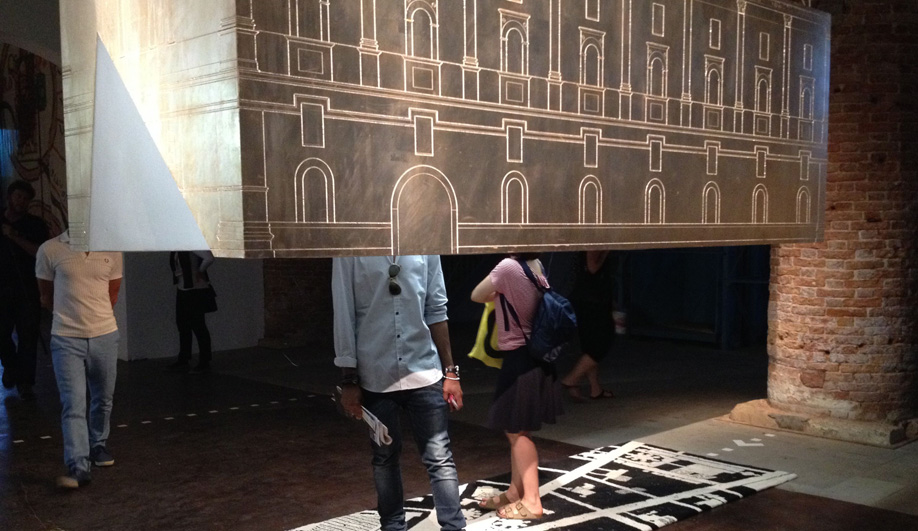 10 Monditalia display at the Arsenale
One of the challenges of an archive-based exhibition is combating the fatigue that hits after reading an endless supply of didactic panels. While Monditalia does lose some of its momentum by sheer volume and a heavy reliance on text, there are numerous installations that elegantly visualize the issues. Here, visitors peer inside the shell of a building modelled after the oldest hospital in Rome, abandoned now and inaccessible, due to a battle between public and private ownership that has been going on since the 1990s. The installation questions the broader topic of who should be the custodians of public heritage.