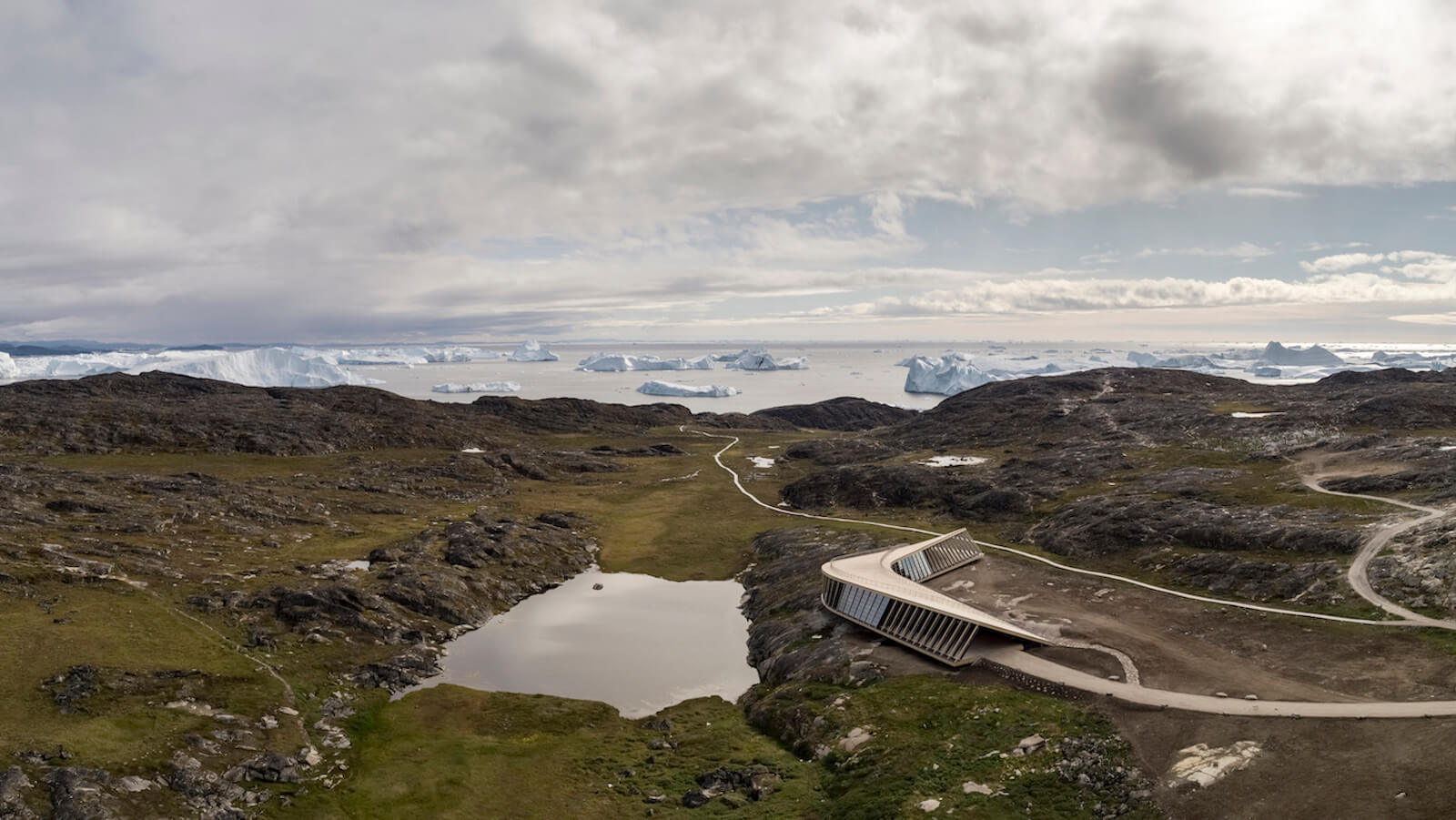 Sermeq Kujalleq is a natural wonder. The world’s fastest glacier, moving at a speed of 40 metres a day and loudly hurling magnificent and variously sized icebergs into the Kangia Icefjord, it has also held up a mirror to climate change for over 250 years from just as many kilometres north of the Arctic Circle. And now, Danish architect Dorte Mandrup has created a visitors centre that allows tourists to see what glaciologists have long been marvelling at, year-round.

Providing shelter from frigid winds during winters when the entire landscape is encrusted in gleaming white ice, the Ilulissat Icefjord Centre appears as light as a bird. Mandrup describes its V-shaped form as “a snowy owl’s flight through the landscape.” Delicate-seeming wood slats wrap the structure from its open-yet-covered end points all across its glazed central spaces; and its gentle slope gives it the sense of floating. While allowing it to dynamically frame views, the building’s elegant shape is also an environmental necessity: it prevents snow build-up. The structure is made with only steel and wood (and minimal concrete) so as not to not disrupt the bedrock on which it sits. This is the oldest terrain of its kind in the world, after all. 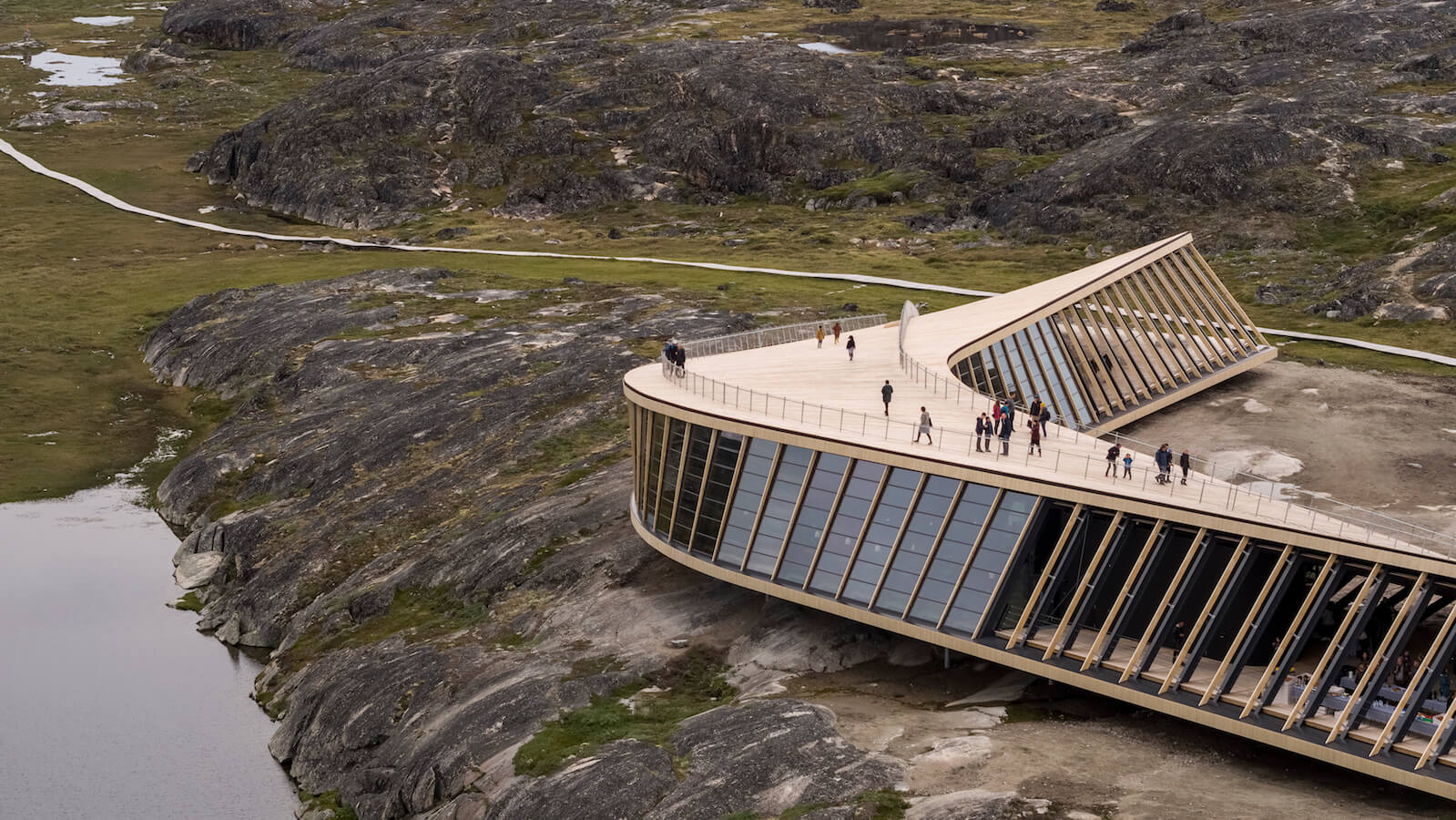 “The Icefjord Centre offers a refuge in the dramatic landscape and aims to become a natural gathering point from which you can experience the infinite, non-human scale of the Arctic wilderness, the transition between darkness and light, the midnight sun, and the Northern lights dancing across the sky,” Mandrup explains. 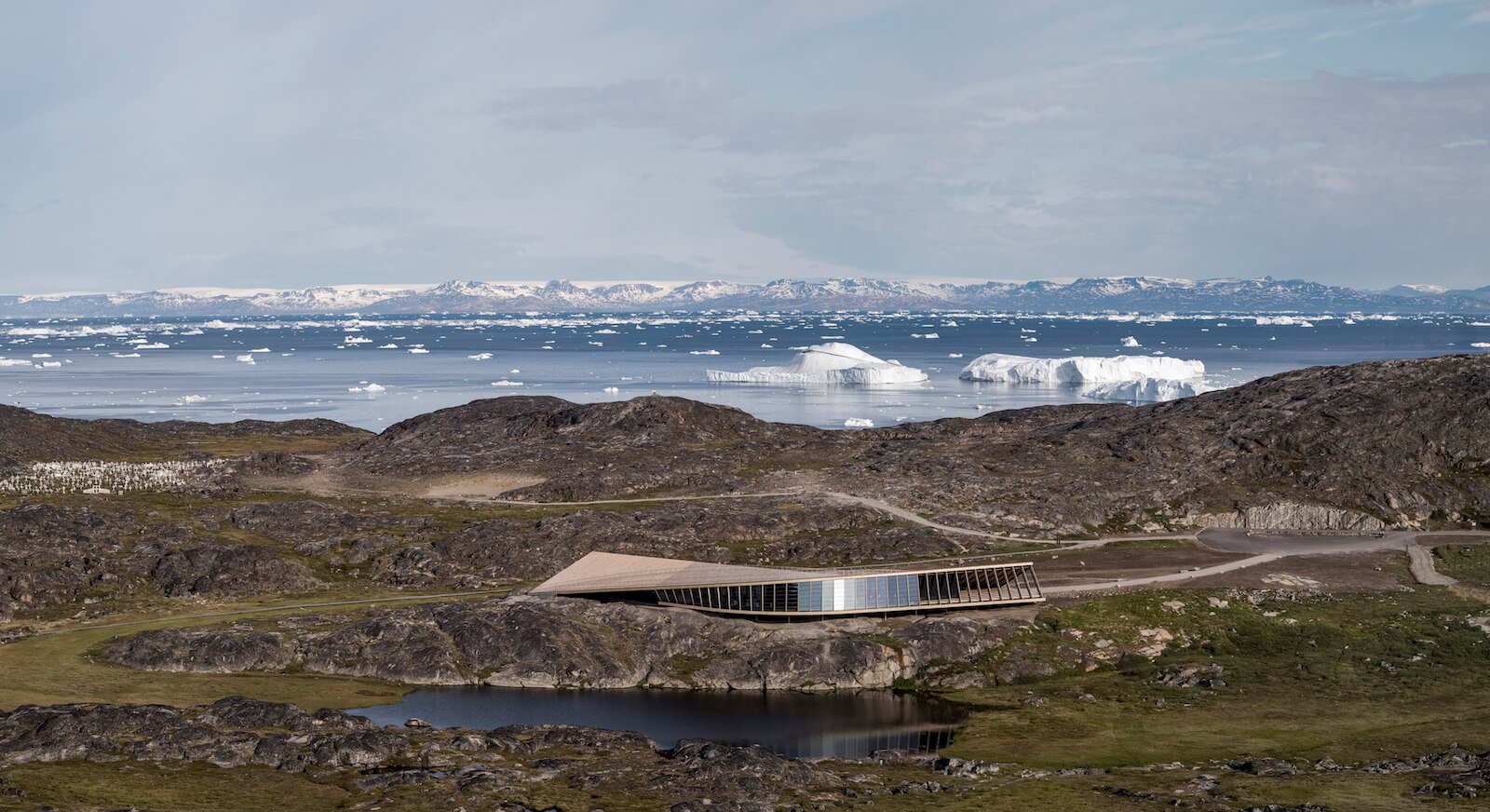 Its roof is designed as a natural extension of the land and as a gateway to the town of Ilulissat and the wilderness beyond that is fully accessible to the public. “When the first glimmer of light hits the horizon in January after six weeks of darkness, the community gathers in this area to celebrate the sun coming up for 40 minutes before leaving again,” reads the official press release. “The hope is that the roof will become the place for this important gathering.” 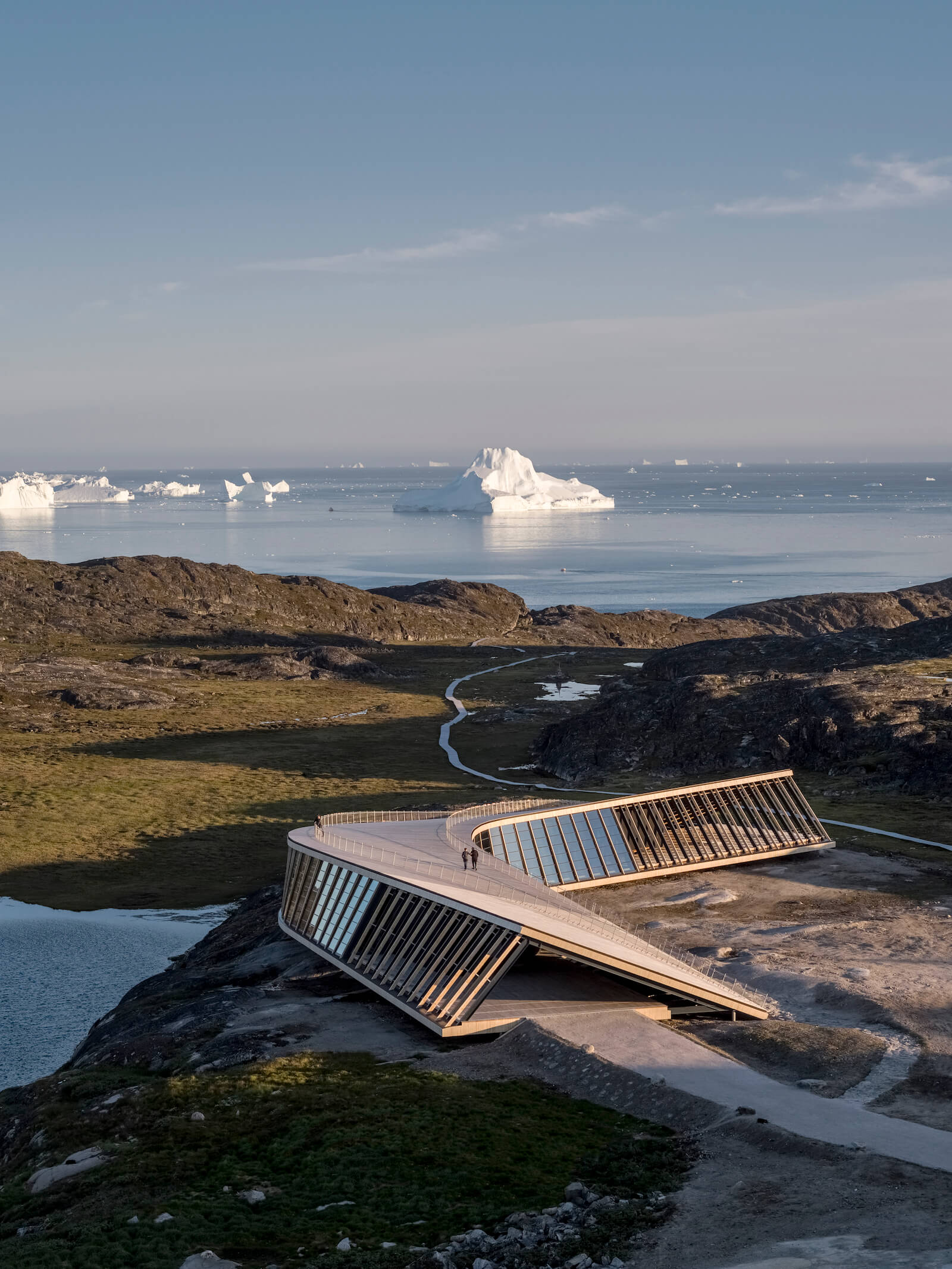 Inside, the centre provides more than just a view out to its surroundings. It also houses exhibitions, a cinema, a café and a shop as well as research and educational facilities. Visitors will learn about what they’re observing in real time, from how the glacier came to be and how it constantly shifts and breaks apart – and what that tells us about climate change – to who has lived on this land for centuries: the different Inuit cultures that have adapted to and survived in the harsh Arctic landscape. 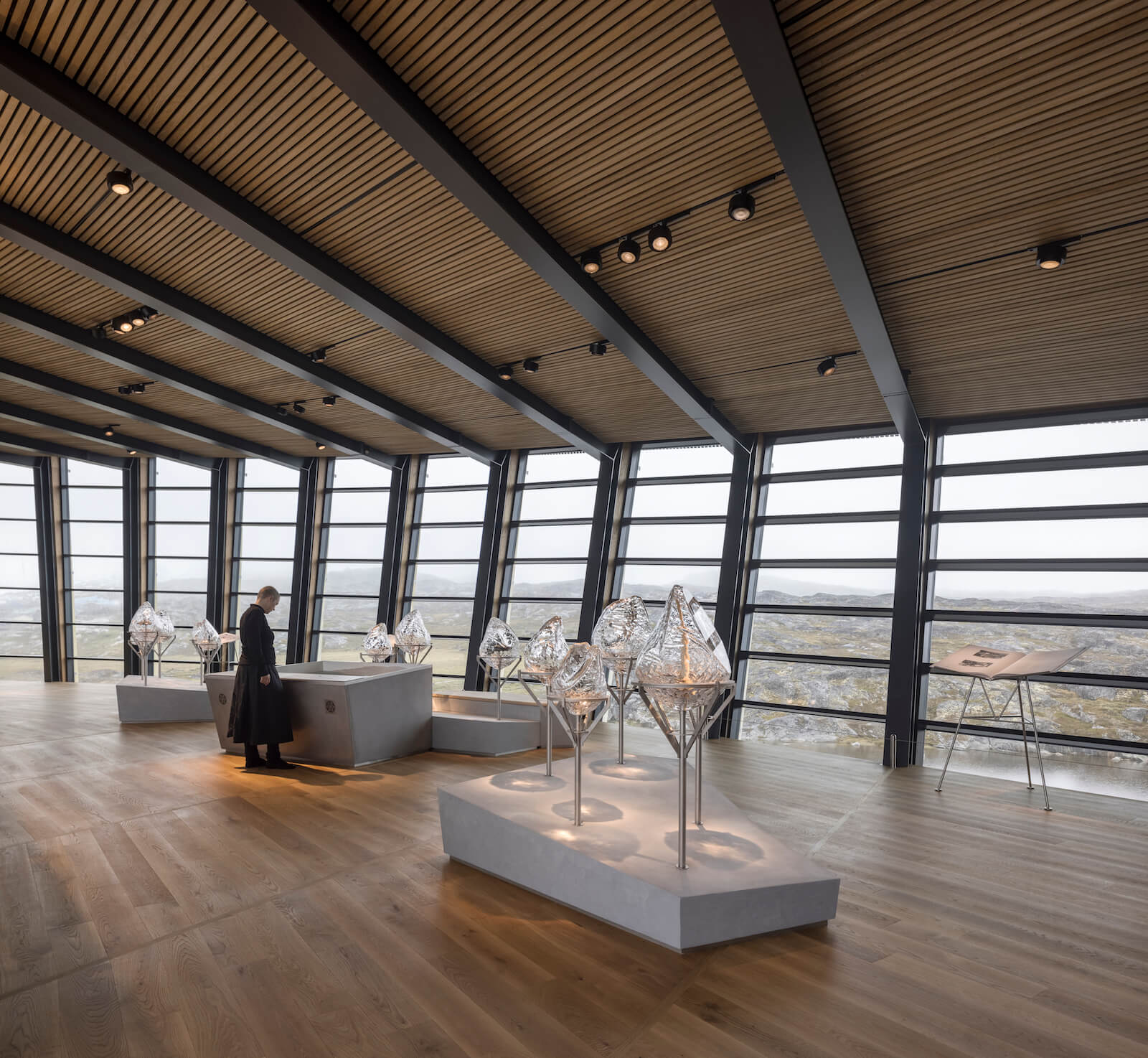 Designed by JAC Studios, the exhibition consists of “ice prisms” that contain archeological objects and films; these crystalline objects in mouth-blown glass are based on 3D-scanned ice blocks collected in the Kangia Icefjord. Central to the exhibition are authentic ice core drillings taken from the ice sheet that tell the story of Greenland, where the oldest ice is an astounding 250,000 years old, through its ever-changing climate and culture.