A Modern Office in a Parisian Palace
For Ekimetrics, an expanding tech firm that occupies a palace near the Arc de Triomphe, architect Estelle Vincent has built a village in lieu of boardrooms and private offices. 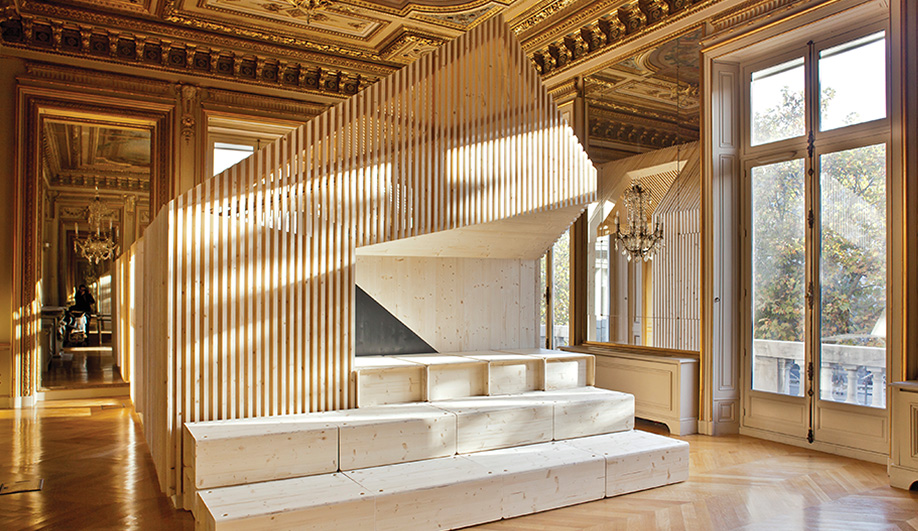 One of four self-contained structures that animate Ekimetrics’ office. “We thought it would be fun to have this rough, cheap material amid the gilding,” says the architect. Located at the entrance, Eki.Cabane features stepped seating and an enclosed office nfor the company’s CEOs. 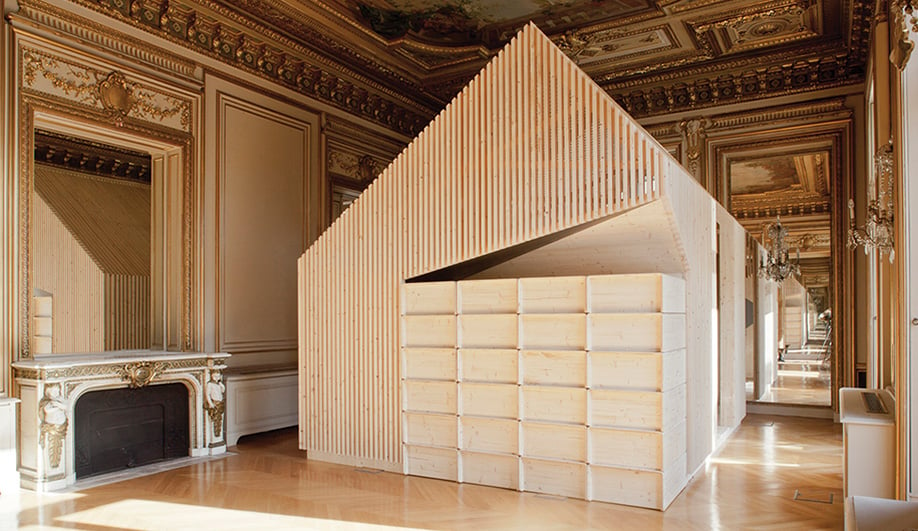 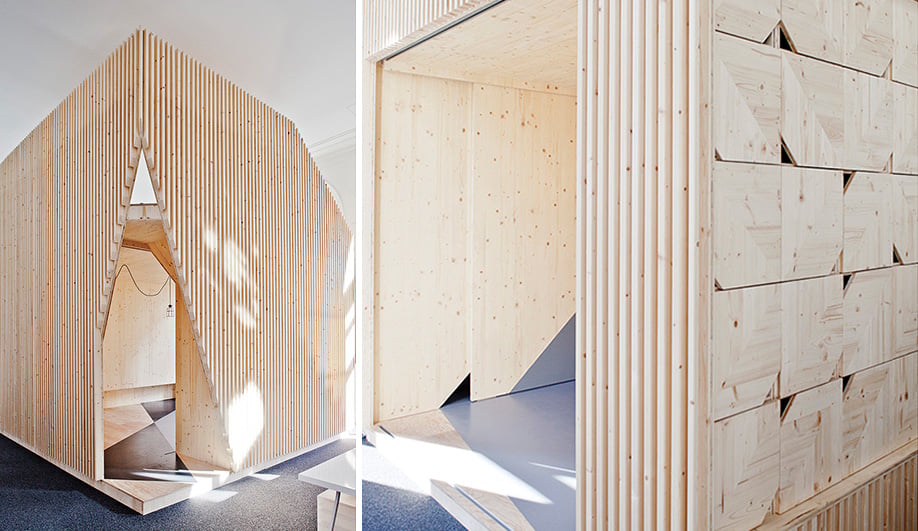 With its blond wood beams and off-kilter corners, Eki.Cube refreshes a less palatial room. The cubbyholes lining one nwall have cut-out notches nto open them with. 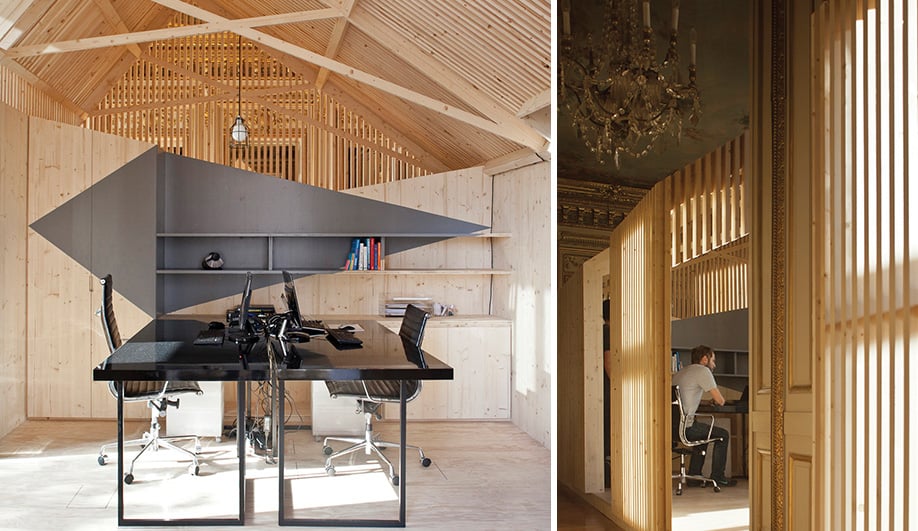 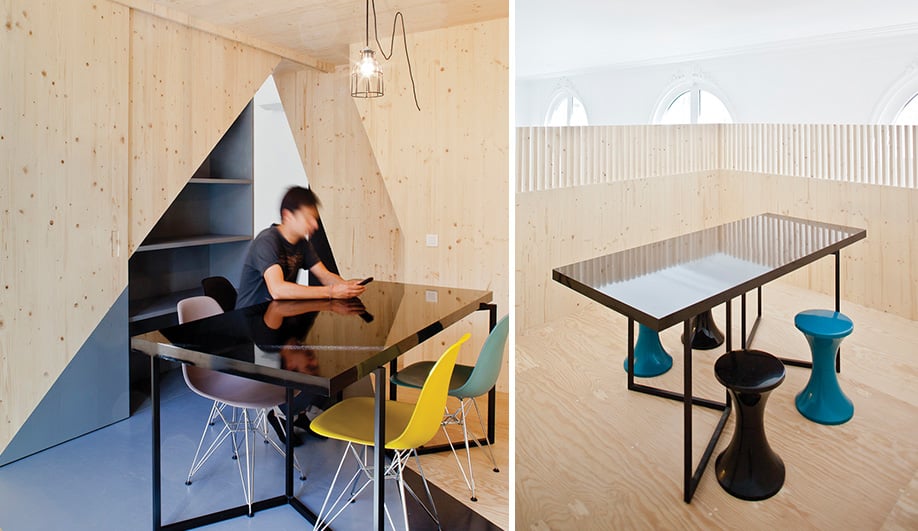 Narrow stairs running alongside the cube’s compact meeting room lead to a small perch for hanging out. 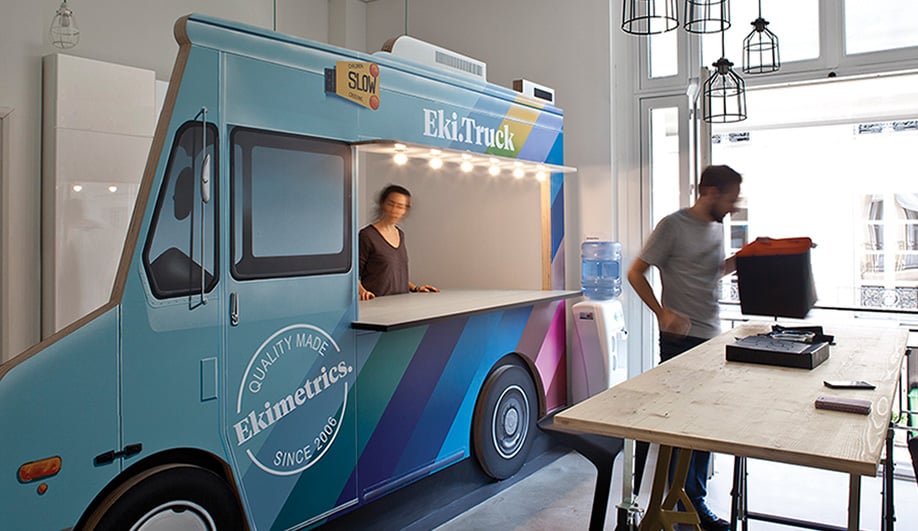 In the Eki.Truck kitchen, Vincent playfully added the profile of a food truck as the serving counter. 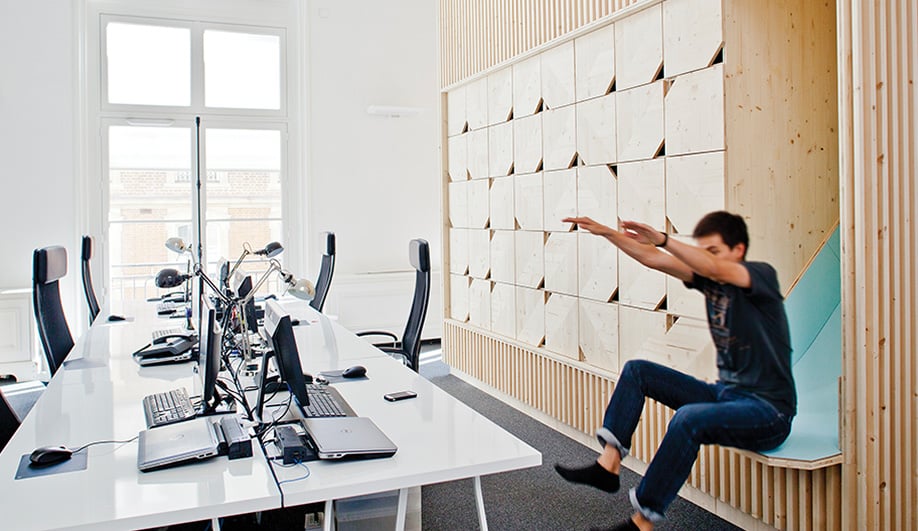 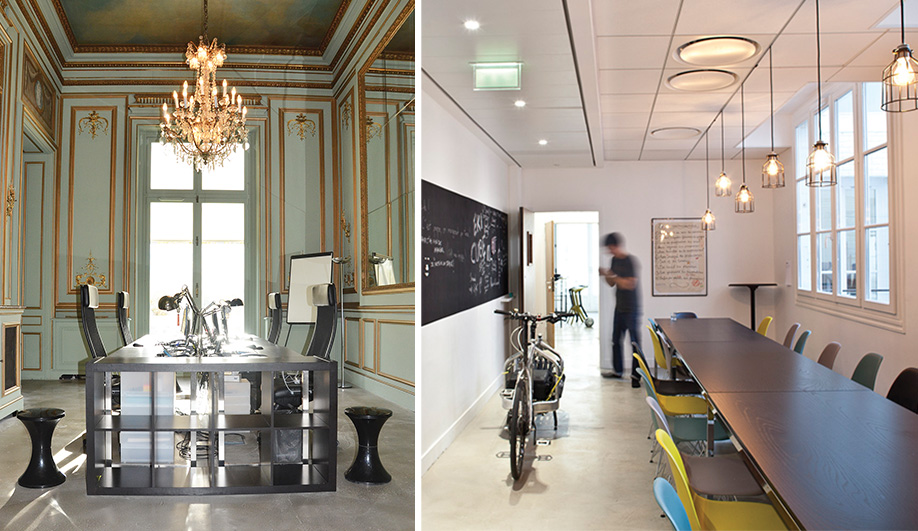 Left: In other areas of the 1,000-square-metre office, nothing was added beyond desks, chairs and computers, which allows the original five-metre-high frescoed ceilings to stand out. Right: Ekimetrics specializes nin big data analytic solutions, and its Paris office is nexpect­ed to grow from 70 nto 100 employees in the coming months. nThe firm also has offices nin London and New York. 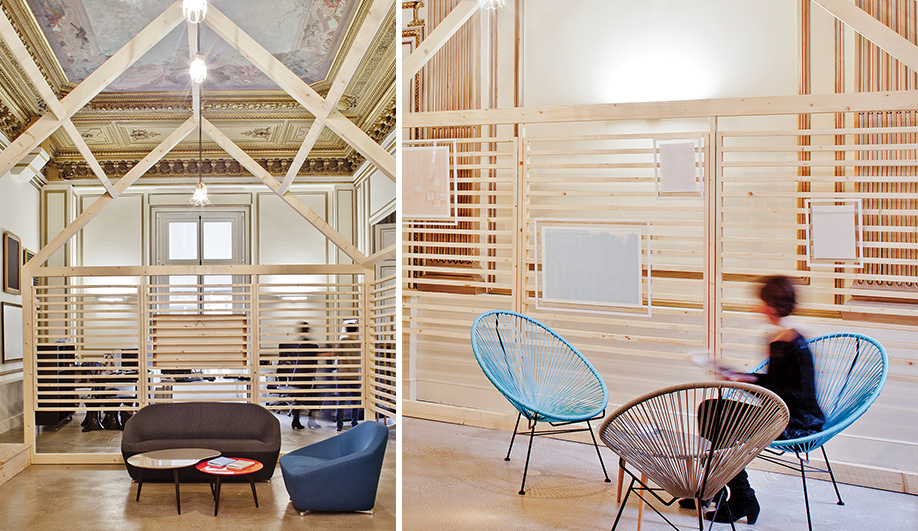 Soft seating and casual Acapulco chairs are set inside a 70-square-metre open framework called Eki.Gallery. The loosely defined space functions as both salon and art gallery.

For Ekimetrics, an expanding tech firm that occupies a palace near the Arc de Triomphe, architect Estelle Vincent has built a village in lieu of boardrooms and private offices.

For a relatively young Paris data consulting company in search of a new headquarters, an arrangement of gilded salons facing onto the Champs Élysées might give the same impression as a gawky teenager dressing in his father’s double-breasted suit – ambitious, but not necessarily a good fit.

Of course, few people would be unimpressed by the grandeur of five-metre-high frescoed ceilings and a location equidistant from the Arc de Triomphe and the Élysée Palace. Better still, those principal salons adjoin two sizable, traditional office wings that will accommodate a constantly expanding team.

To hear Ekimetrics CEO Jean-Baptiste Bouzige tell it, the former office (originally a decadent private residence) satisfied the need for 1,000 square metres of largely open space for a company with the desire to stand out from other tech start-ups. To improve the functionality of the floor plan and push the aesthetic forward by at least a century, Bouzige turned to independent architect and friend Estelle Vincent, who quickly learned that the project came with a major caveat: all of the historical details – the mouldings, the woodwork, the cherubic allegories – were classé and could not be altered.

As far as constraints go, this one worked in their favour; they imposed little change on the entry, other than installing composite board running nearly the length of the space, and adding a pair of Cinna chairs in peacock blue. Step into the 90-square-metre conference room, however, and the scope of Vincent’s concept comes into focus. Situated in the back half of the salon, the Eki.Cabane features stepped seating on one side and an enclosed office for Bouzige and company founder François Poitrine on the other. The use of unfinished pine was deliberate, Vincent says: “We thought it would be fun to have this rough, cheap material amid the gilding.” Meanwhile, her modular table design takes cues from Chinese tangram puzzles, with pieces that can be configured and grouped in dozens of ways.

The architect, who has gradually grown her practice over the past two years, continued the notion of sub-volumes with the Eki.Gallery and the double-height Eki.Cube. The former utilizes a comparatively open framework for a 70-square-metre salon – essentially the primary passageway to the back offices – separating a cluster of desks from an art space (supporting the visual arts has become a key initiative for the company, especially works that explore digital or scientific themes).

The latter structure can be found in one of the general office wings, where blond wood beams introduce warmth to an otherwise lacklustre zone. Narrow stairs running alongside the cube’s compact meeting room lead to a small perch for hanging out. And because no tech company seems complete without a nod to childhood, a slide can deliver employees back down to ground level.

Vincent reserved the most playful element for the kitchen; located in a back corner, the counter space is fronted with the profile of a food truck. Even if Eki.Truck is more trompe l’oeil than taco service, it reinforces Ekimetrics’ zeitgeisty spirit. This past spring, the company invited graphic artist Vincent Broquaire to spend a week enlivening the walls with his minimalist doodles.

Having kept the project on budget (50,000 euro is no small accomplishment), the architect reveals that she is proudest that the realization of her slatted structures proved so seamless; the beams are pegged from the inside with no visible nails. From certain viewpoints, bias angles throw her original schema into sharp relief. “It’s a small detail, but it makes a difference visually,” she says.

The details do make a difference, though, whether in the panels of acoustic padding encased in gilded frames, or the wall of cubbyholes, whose notched openings echo her Eki.Cube. As Ekimetrics continues to expand (from 70 employees to 100 by summer) and attracts such high-profile clients as LVMH and Renault-Nissan Alliance, Bouzige says the company benefits greatly from an office that makes a strong first impression. “We are different from what exists in the marketplace, and as we grow, the challenge is to preserve that,” he explains. “The cultural point of view is very important, and our office is part of our culture.” ­