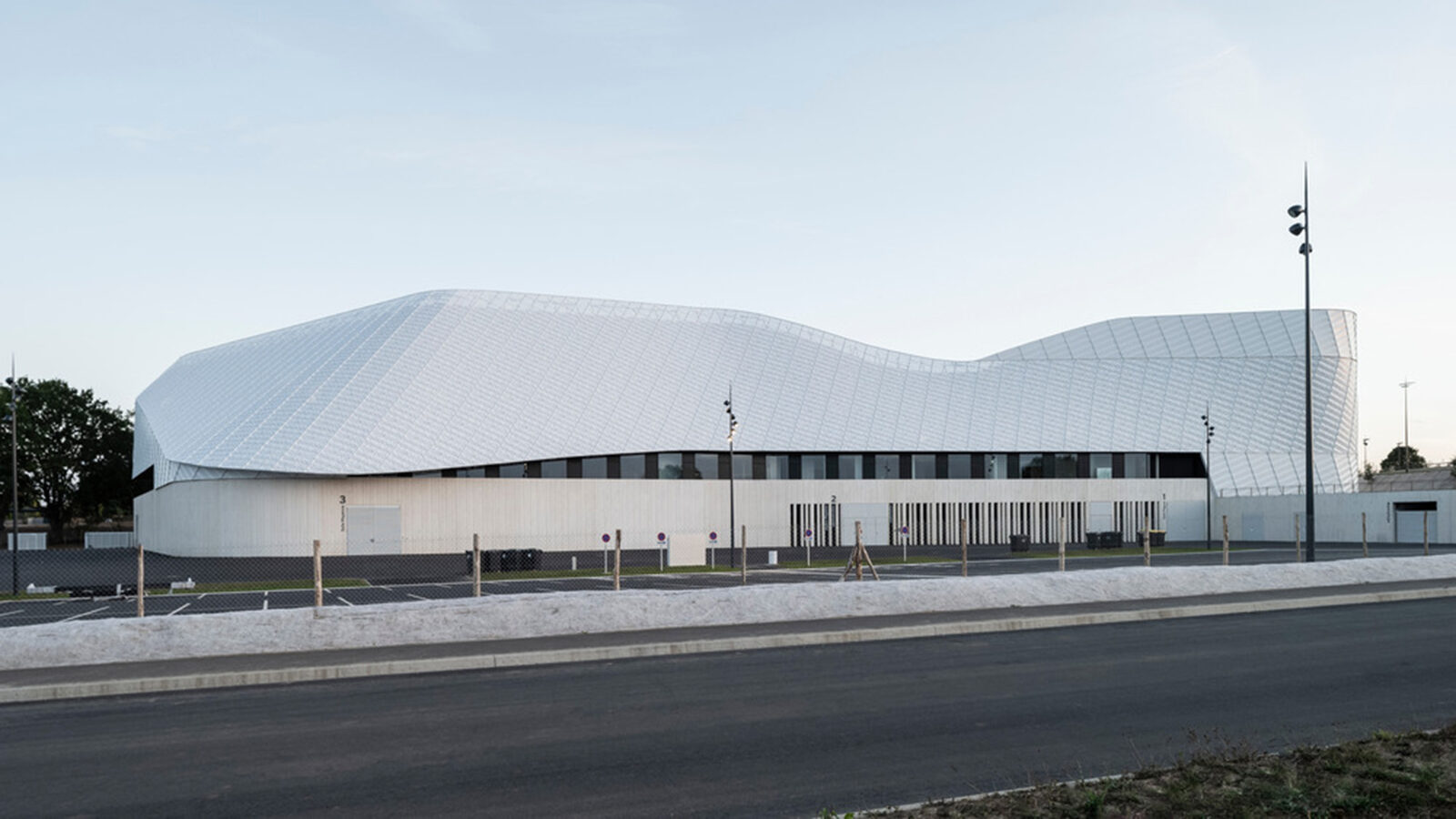 Since the Middle Ages, the town of Laval has served as a vital military stronghold in western France, from the Hundred Years War to World War Two. But the growing city, which is now home to nearly 150,000 people, is due for a new claim to fame. Enter Espace Mayenne, a 15,100-square-metre complex designed by Hérault Arnod Architectures that revives a former military site on the outskirts of the city as a vibrant sports and entertainment centre. The Paris firm’s sensitive design embraces the rolling hills of the French countryside to weave the building — and surrounding landscaped area — seamlessly into its bucolic context. 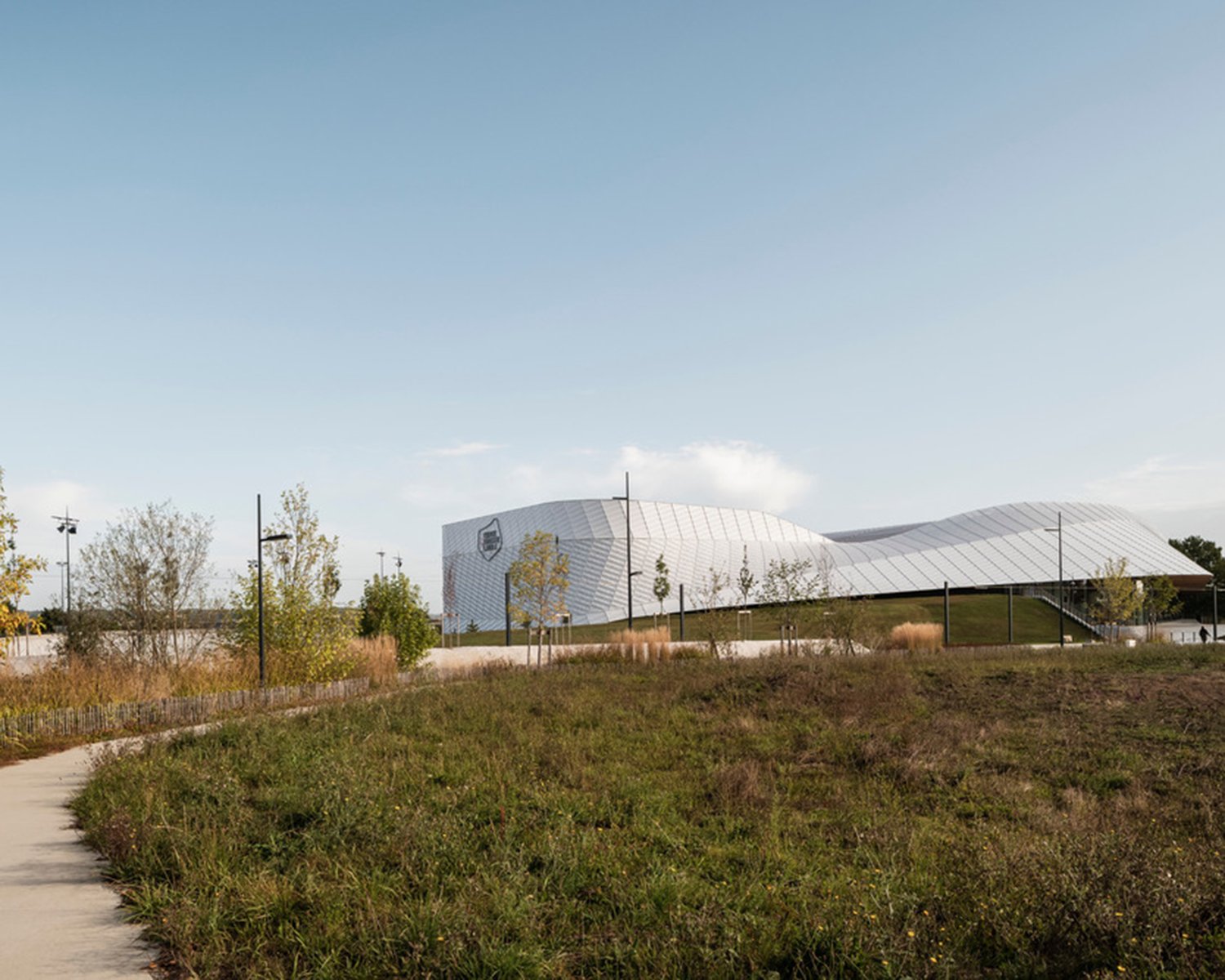 The design development process began with an urban and landscape study in accordance with guidelines set by the rapidly growing region, and the surrounding neighbourhood. To honour the history of the site, natural marshes, woodlands and wet meadows, as well as an old bocage grid — a verdant pastiche of sculptural trees and sunken lanes — have been expertly preserved with ecology and economy of means in mind. The architects have also devised a master plan that retains parcels of land for future development. 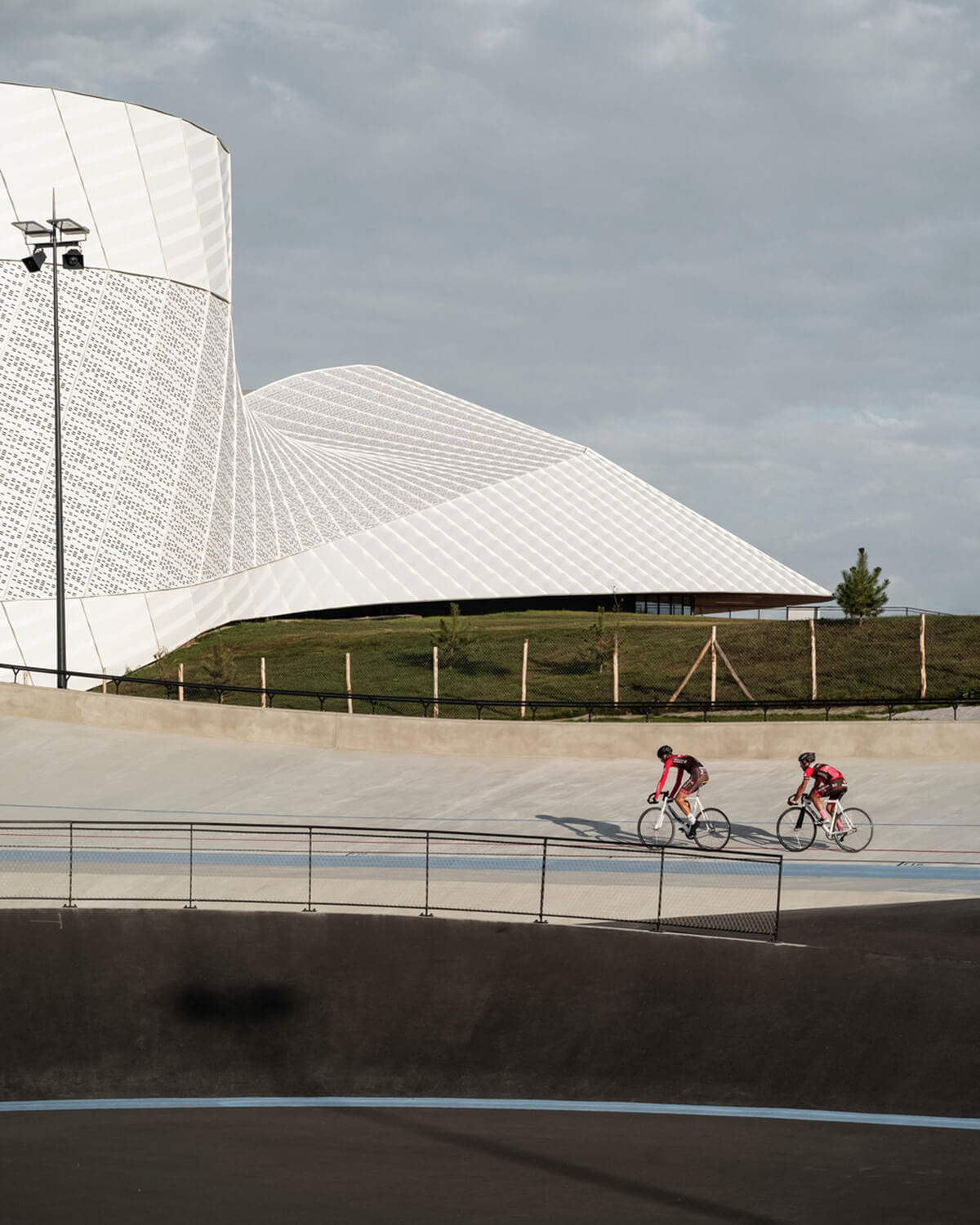 A 250-metre-long velodrome, or cycling ring, hosts national competitions, with a training track located at its centre. Elsewhere, a bike path traverses the site from west to east, crossing the parking lot and wetlands before widening to form a piazza at the building’s entrance. As you approach, the building’s organic shape shifts depending on your point of view. 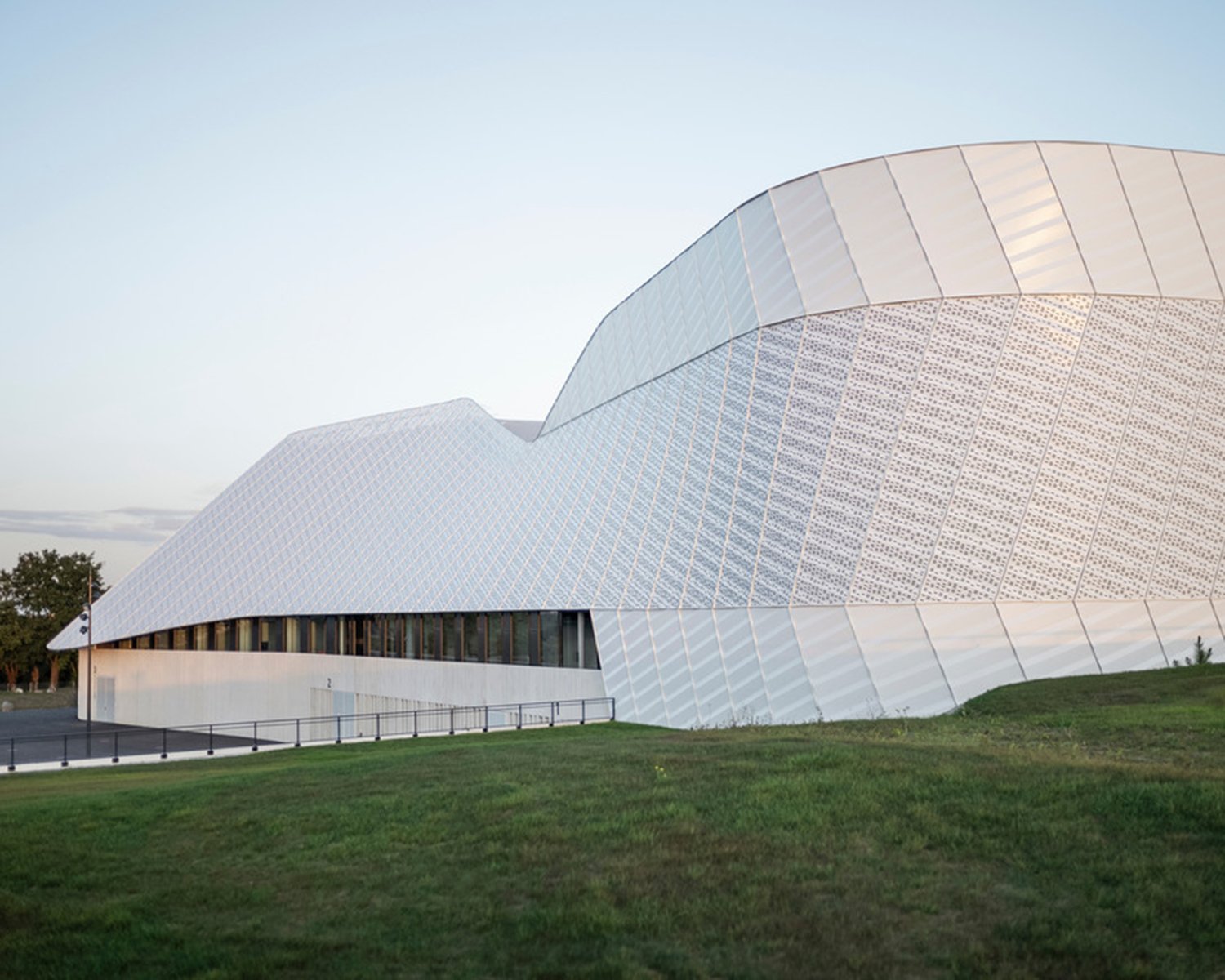 Appearing as a monolith from a distance, the complexity of Espace Mayenne’s facade reveals itself up close. The flexible plane wraps around the structure like a skin, elevating at certain points to uncover glazing behind it. The facade consists of three horizontally stacked ribbons made of identical geometric textured-aluminum modules. Overlapping and rotating around the building, the panels imbue the complex with a sense of unity and fluid movement. 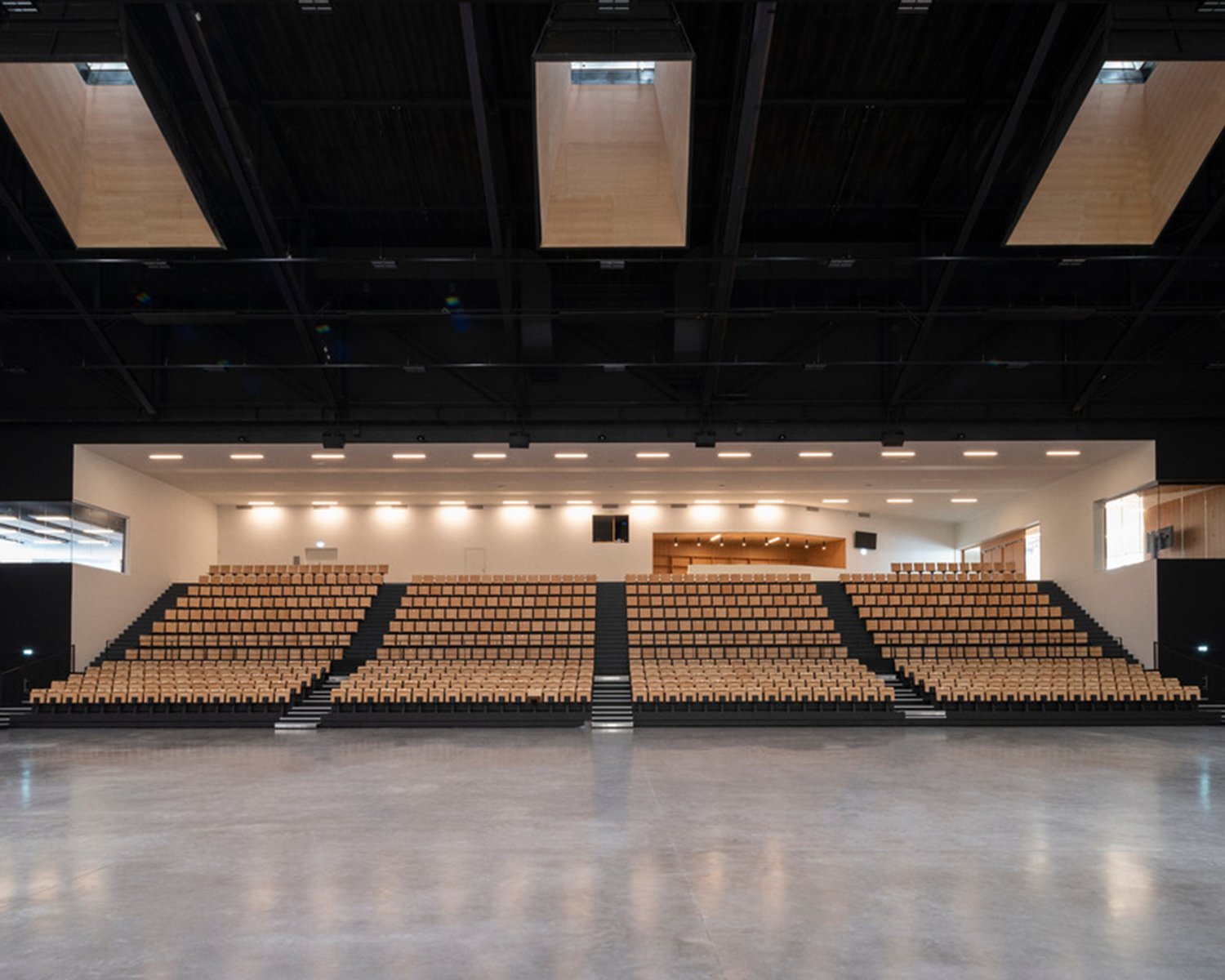 To avoid unnecessary intervention on the site, the building comprises the multifunctional facility’s three separate venues — a sports and entertainment venue, gymnasium (complete with a 16-metre geometric climbing wall used for international competitions) and conference hall — under one roof, connected by an interstitial lobby. This flexible conch-shaped vestibule offers a fluid circulation space that can adapt depending on which venues are occupied at the time. 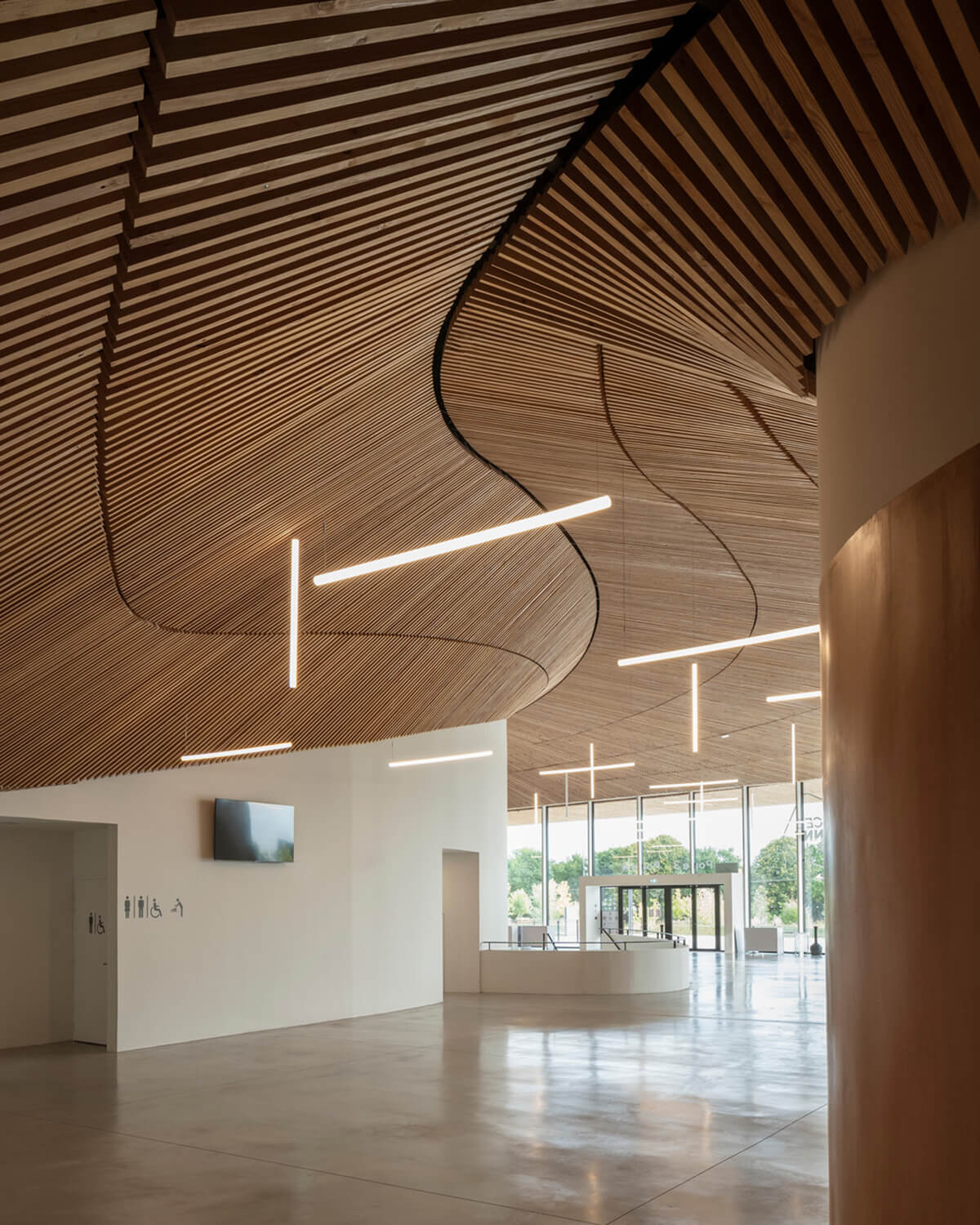 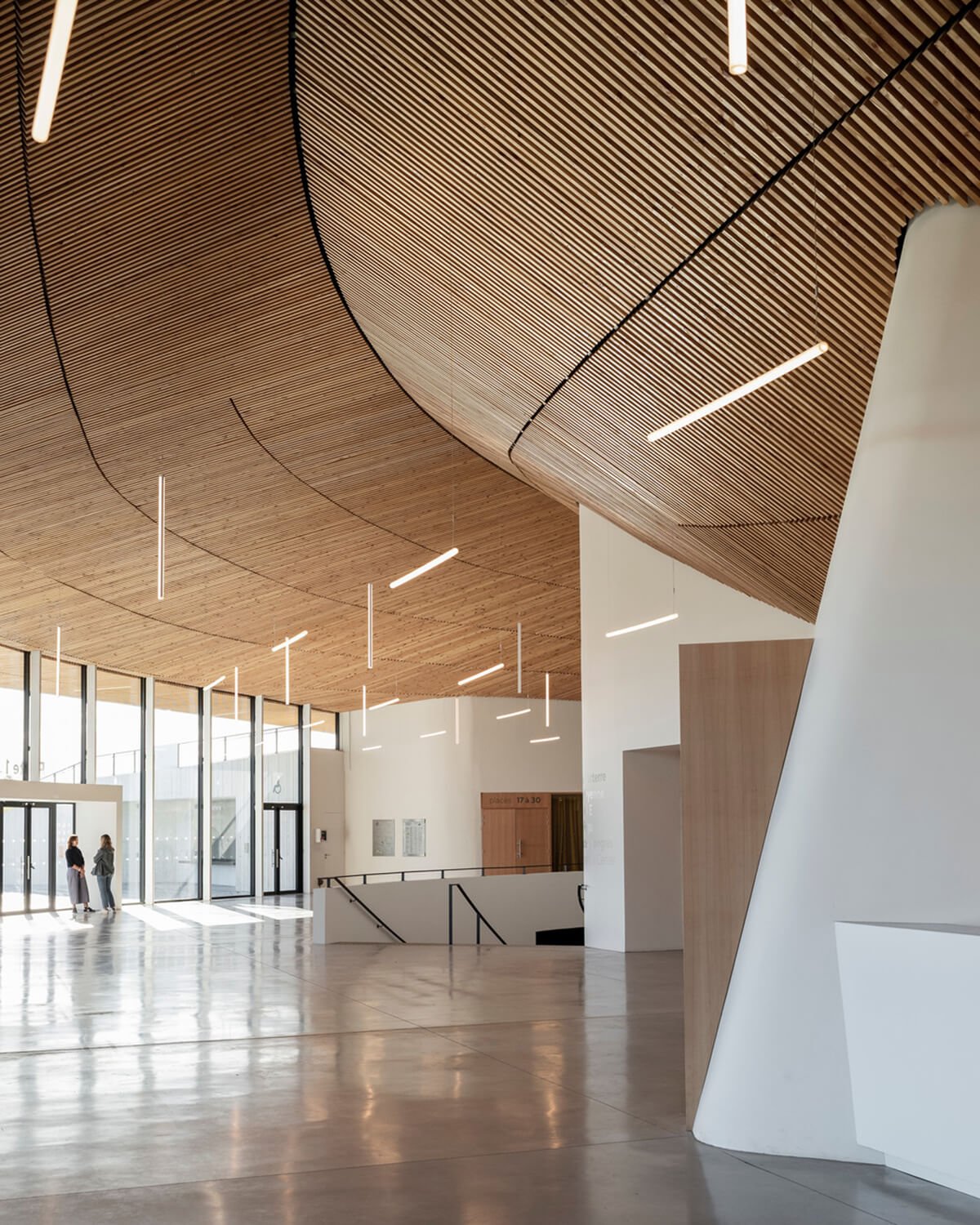 Above, a ceiling of wooden boards is both an acoustic element and a defining visual feature. Meanwhile, a lower — albeit still light-filled — floor houses offices and cloakrooms for artists and athletes, ensuring that the public remains separate from the athletes, technicians, artists and staff that use the facility. 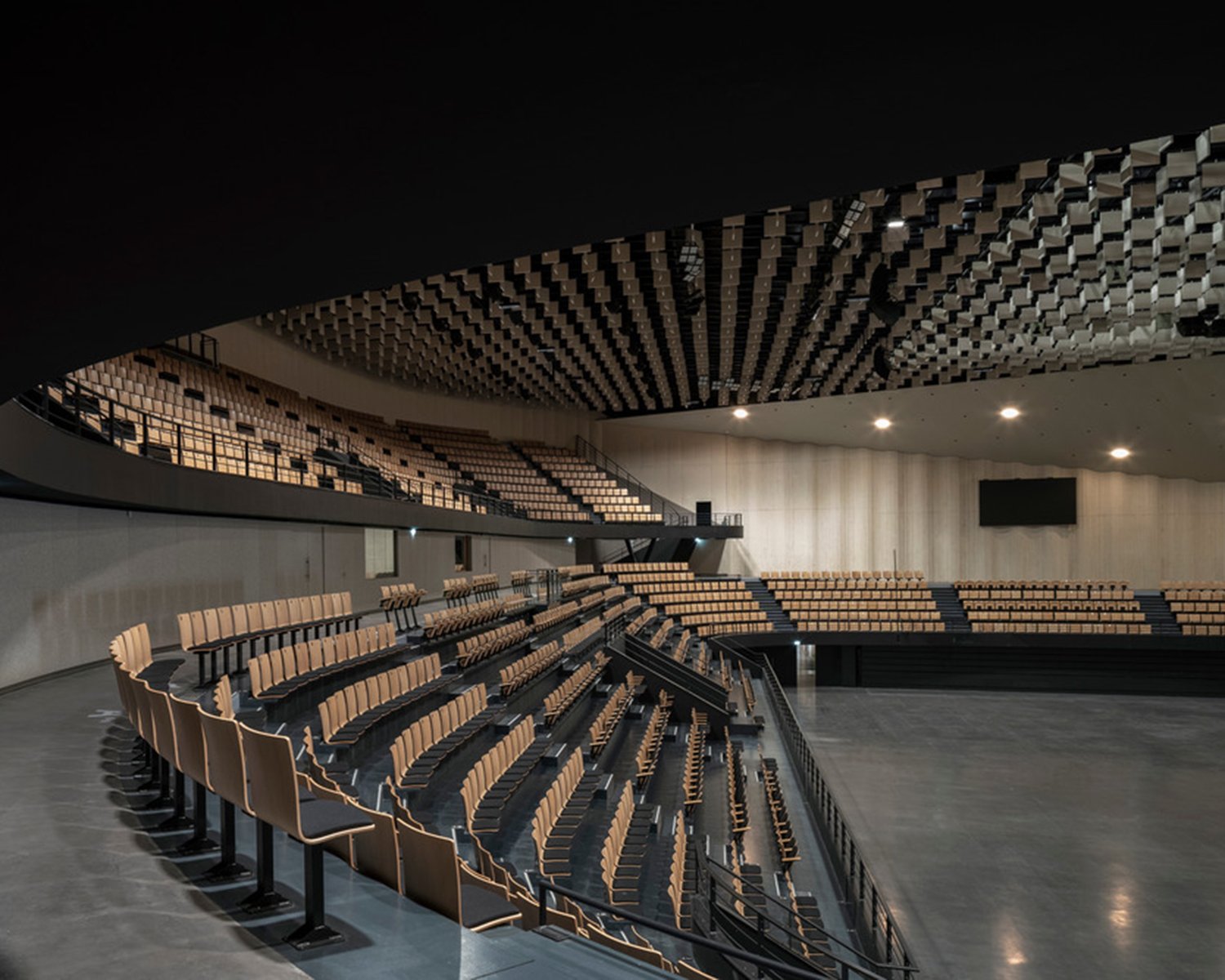 As its name suggests, the grand hall is the main event. With a capacity of 4,500 people, the versatile space can be quickly and easily converted to accommodate shows, concerts and sports games. The asymmetrical room, with a balcony on one side, allows a stage to be installed on the long north side, reducing the distance between performers and the public. Diagonal curtains can be drawn to transform the arena into a trapezoid that flares out from the stage. In the sports configuration, the hall converts to an arena layout with bleachers surrounding the field. 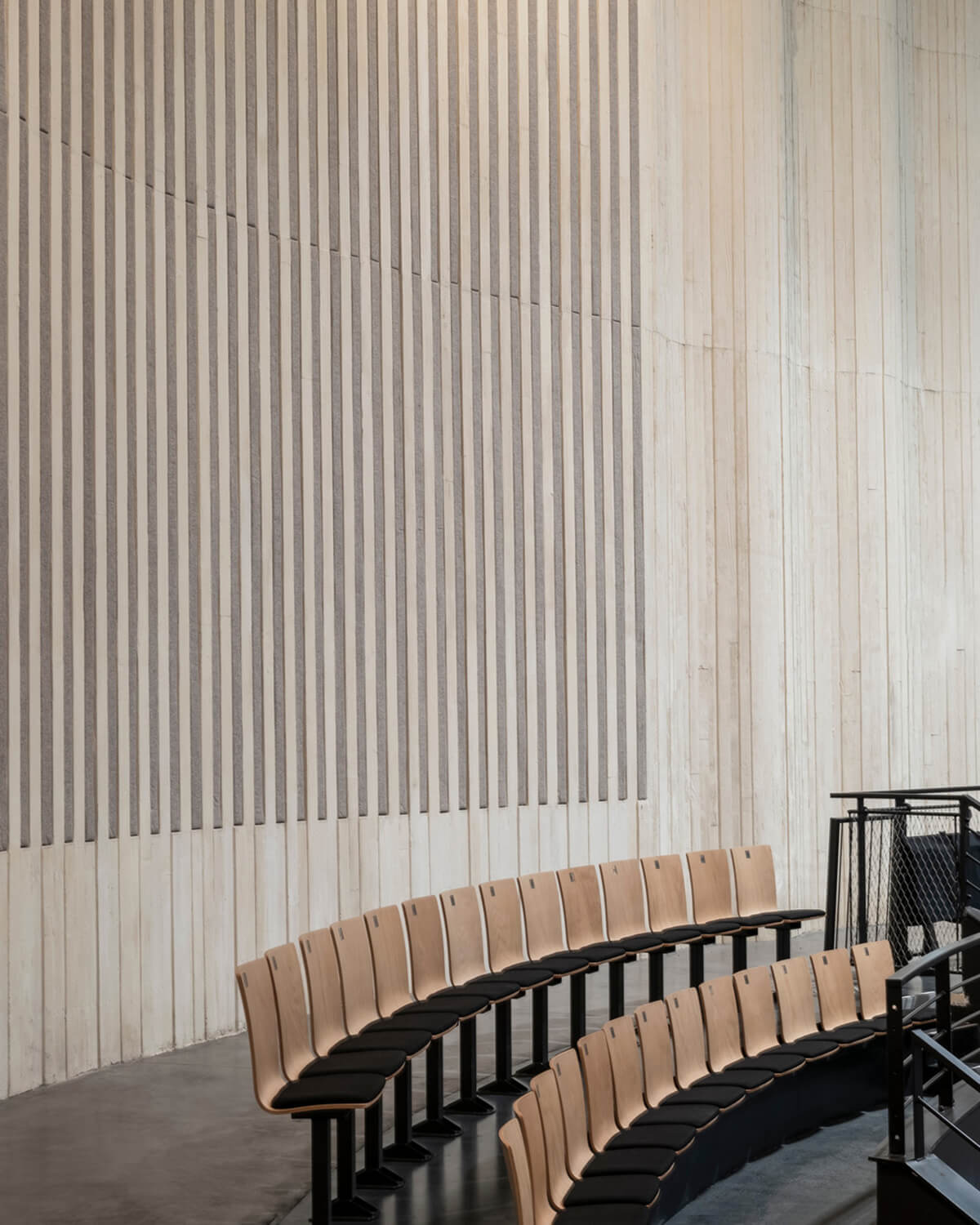 To optimize the acoustics, walls alternate between raw white concrete and wool felt to create spaces of both absorption and reflection. Corrugated raw concrete distributes the sound, while strips of concrete and wood felt are intermingled to create a mixed acoustic experience. Felt stretched with an acoustic mat makes for an absorbing zone behind the bleachers and above; more felt panels are suspending on the ceiling in a geometric pattern, concealing the technical grid behind them. 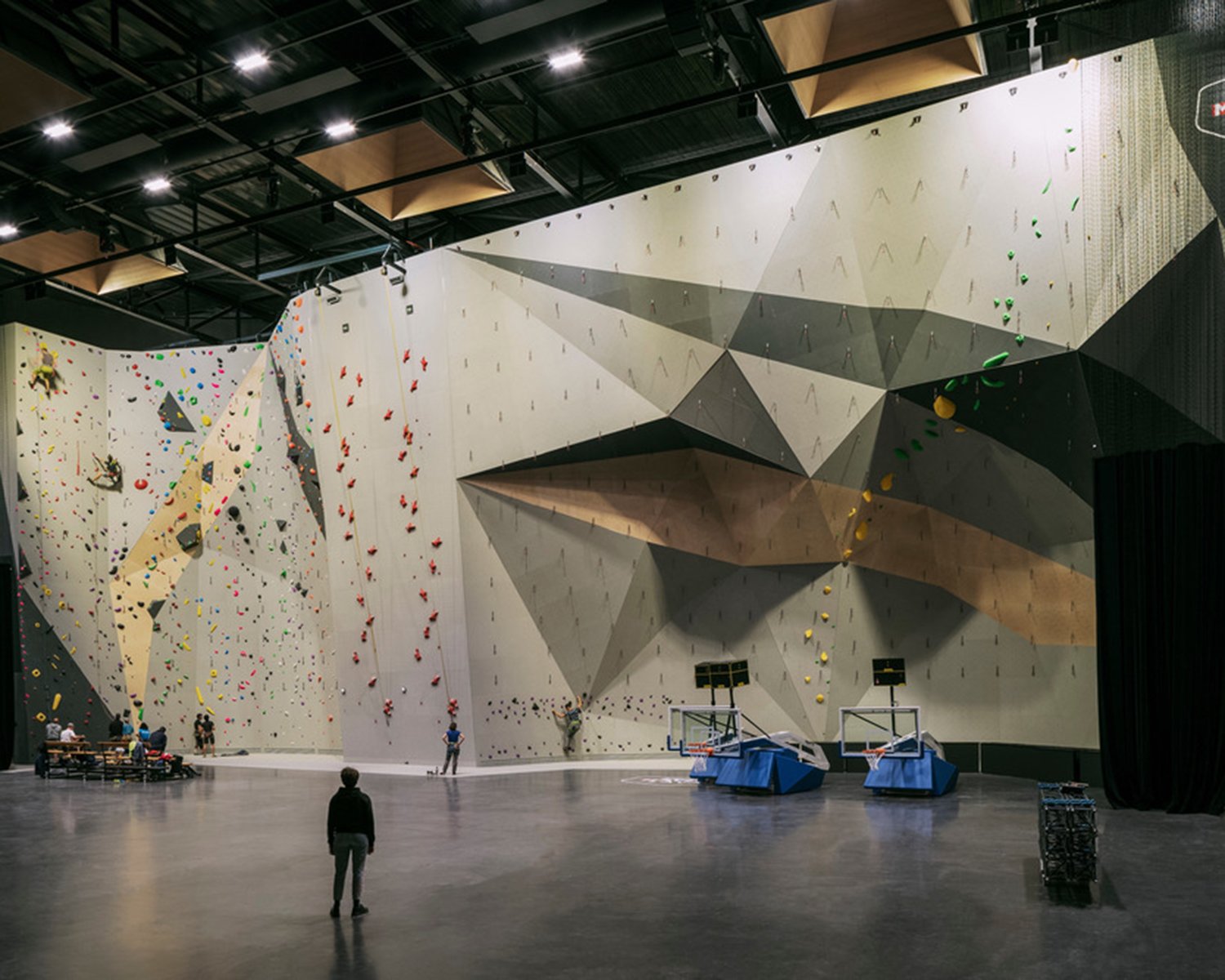 Drawing on their ample experience designing public venues, Hérault Arnod Architectures has crafted a space that is elegant in its efficiency. And while a town of Laval’s size may seem an unusual place for a space of this grandeur, Espace Mayenne may well be the first contemporary building that puts Laval on the map.