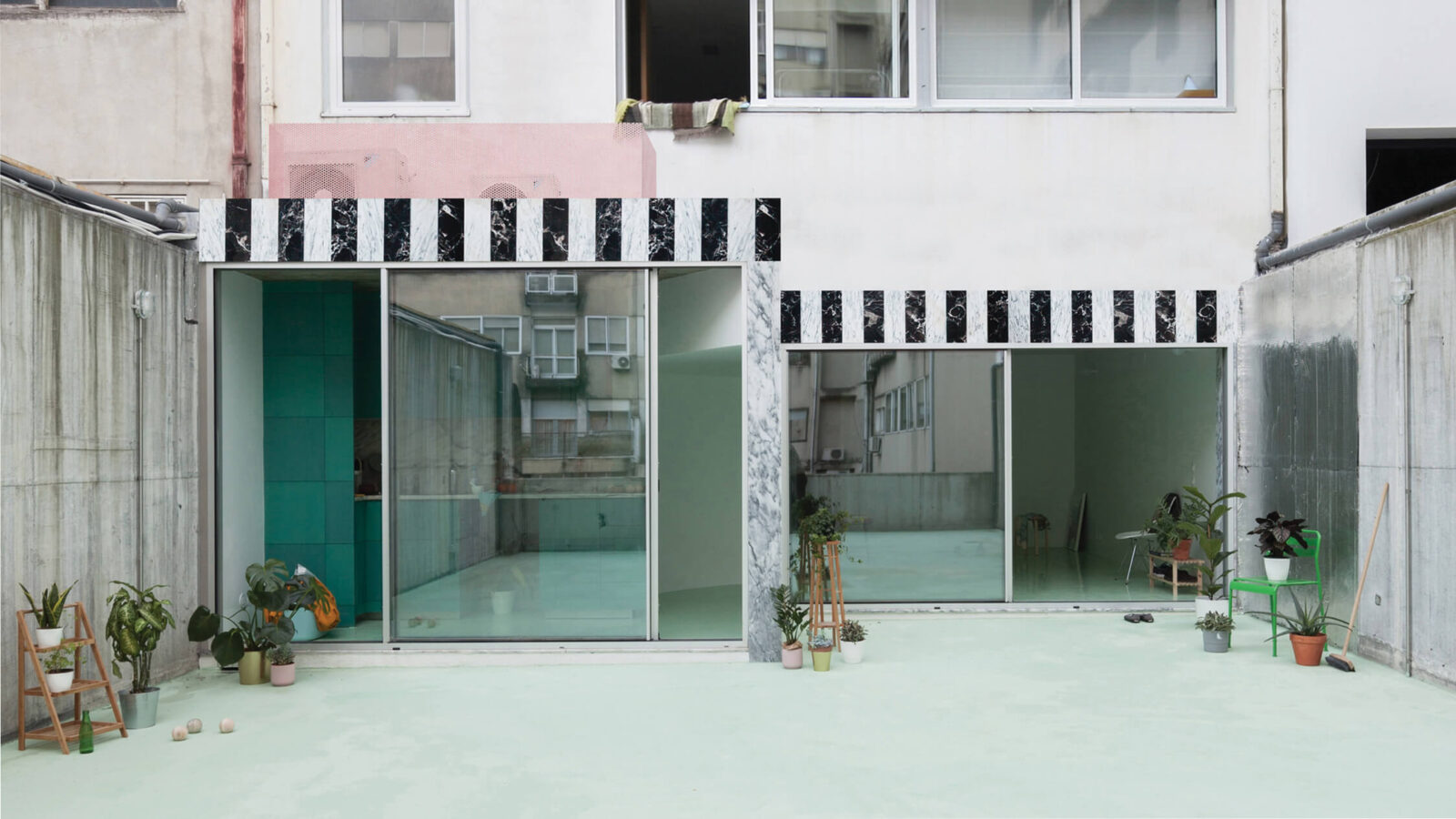 In Porto, a Collage-Like Renovation Animates a Modernist Apartment

Though Porto is home to its share of globally renowned projects by the likes of OMA, Álvaro Siza and many more, the Portuguese city has also welcomed a series of more subtle – but equally striking – interventions throughout its architectural fabric.

Take, for instance, Fala Atelier‘s most recent renovation of a 190-square-metre apartment on the ground floor of a modernist housing complex. The project sees the local studio translate the pictorial qualities of their post-digital collages into a charming new interior.

Remedying the challenging geometries of the existing plan, a gestural curving wall was introduced to not only define the two bedrooms and accompanying washroom, but to create acoustic as well as visual separation between the nearby living room. Full-height, blonde-wood doors accent the crisp white walls to “suggest different degrees of privacy,” says the studio, led by Filipe Magalhães, Ana Luisa Soares and Ahmed Belkhodja. 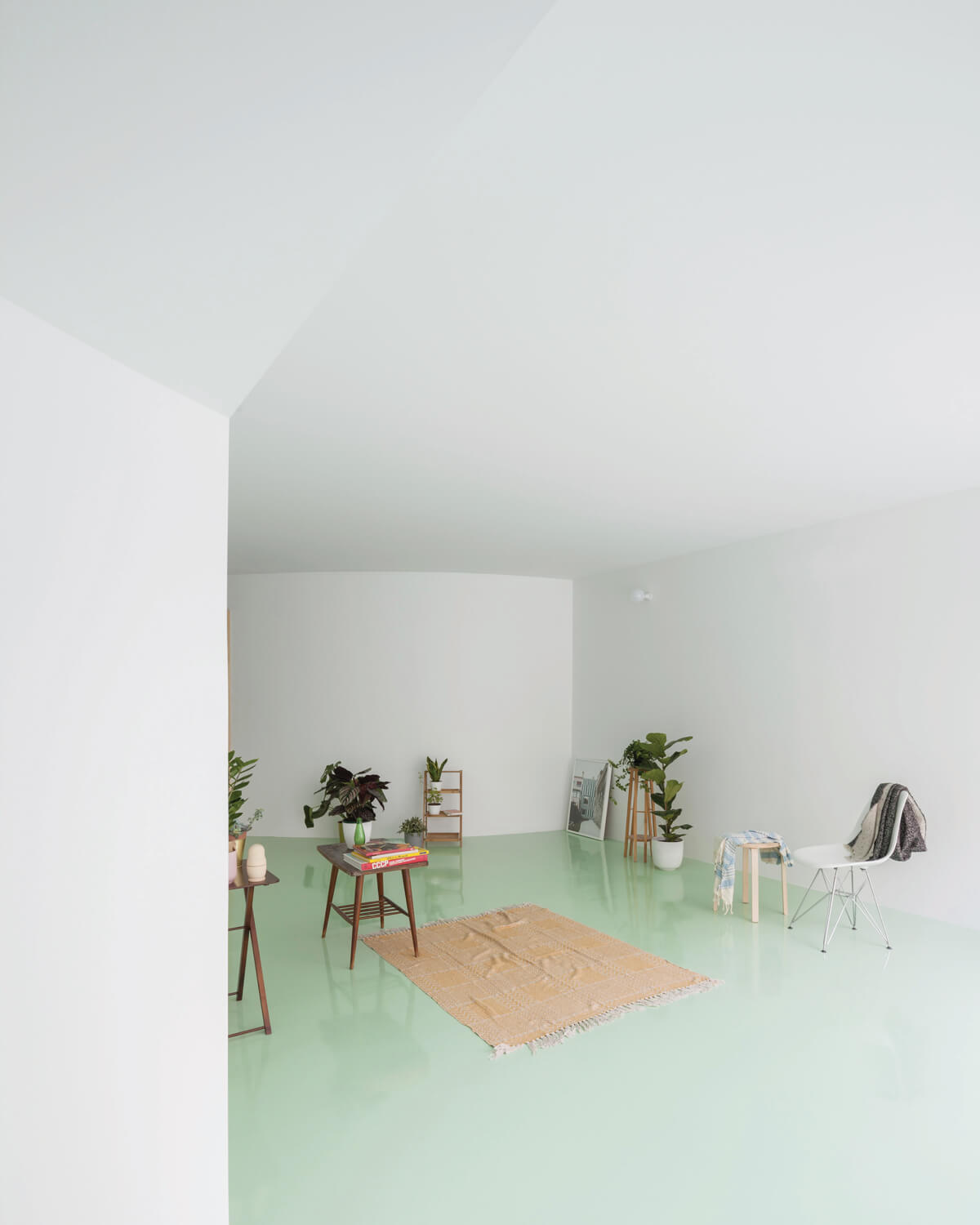 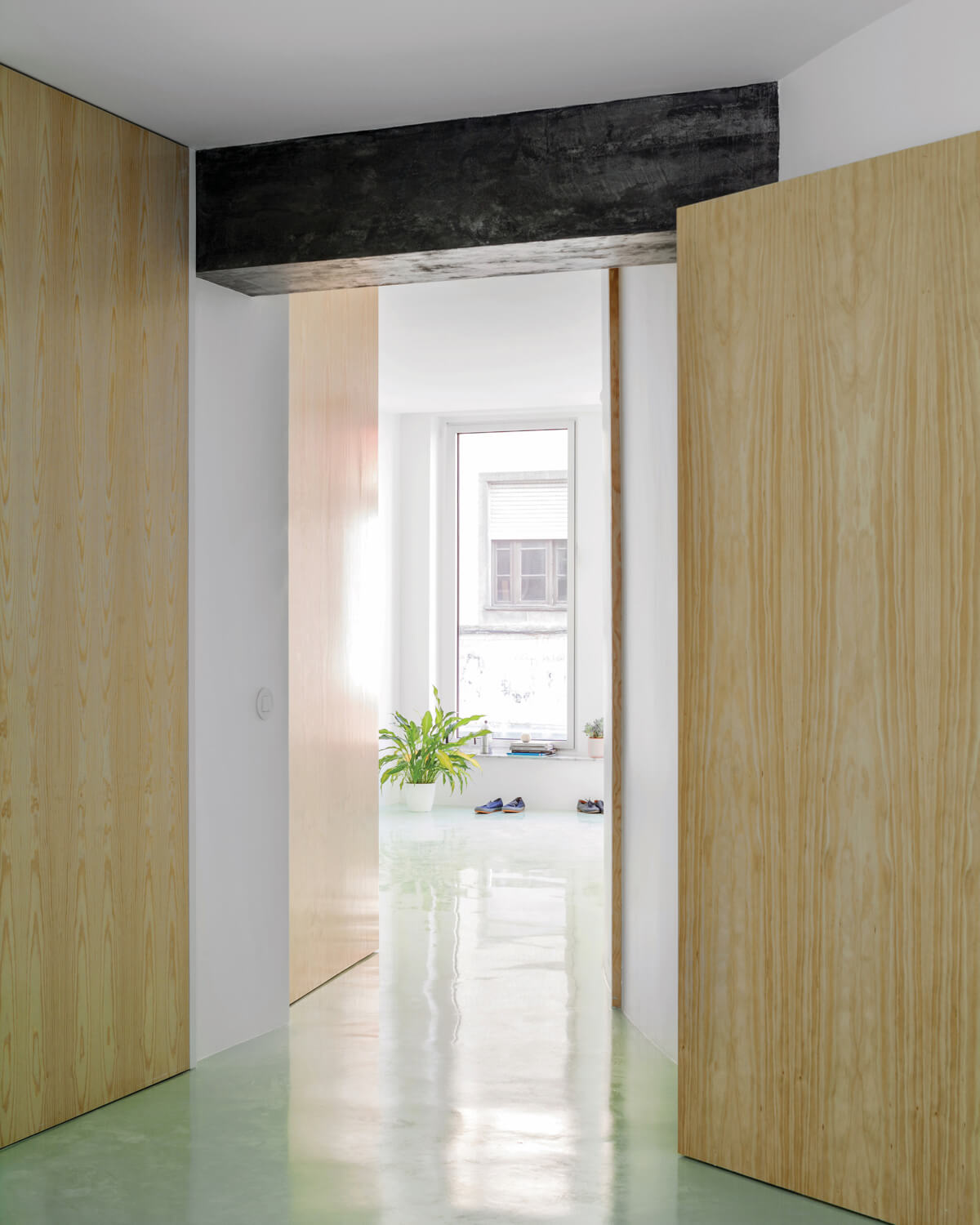 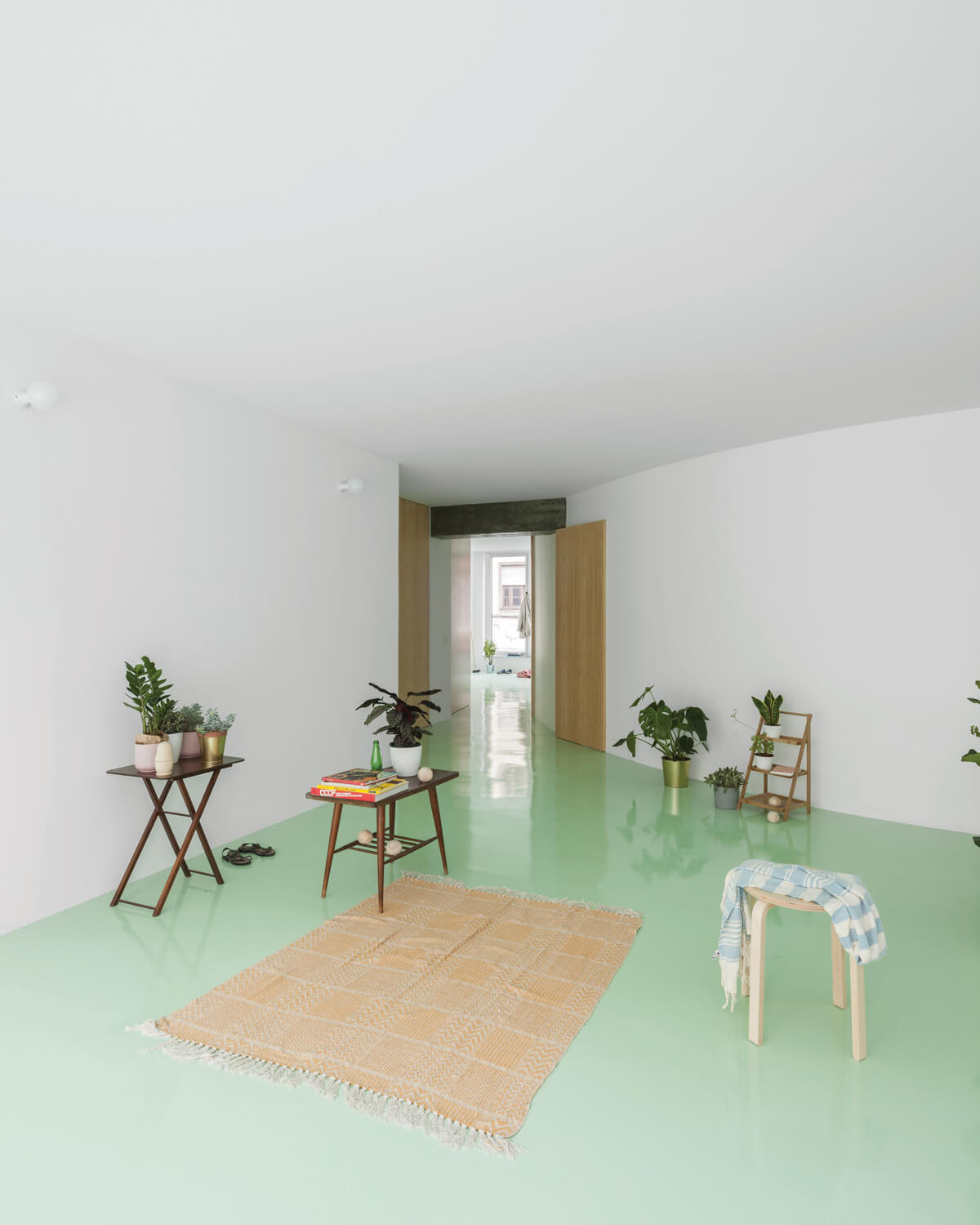 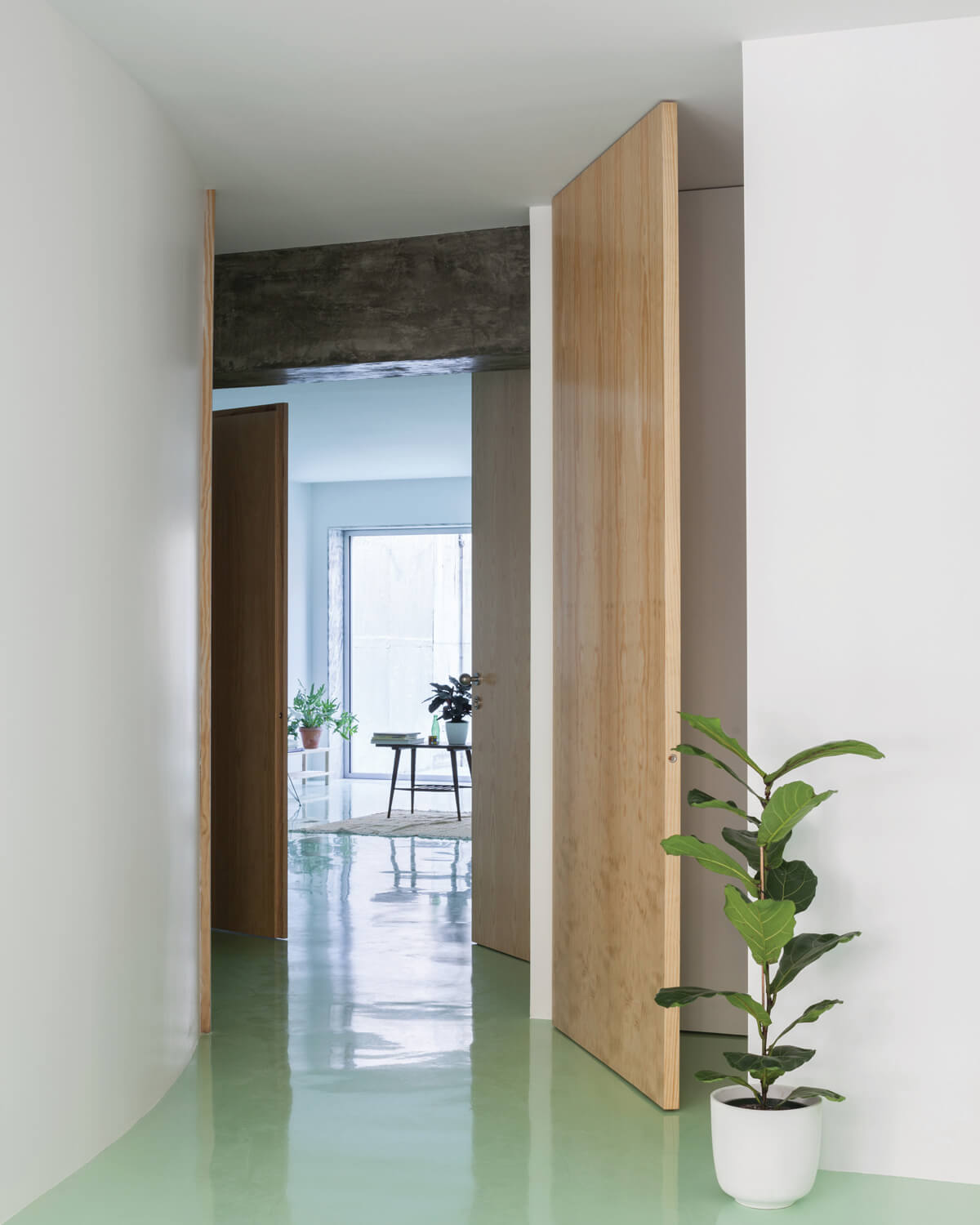 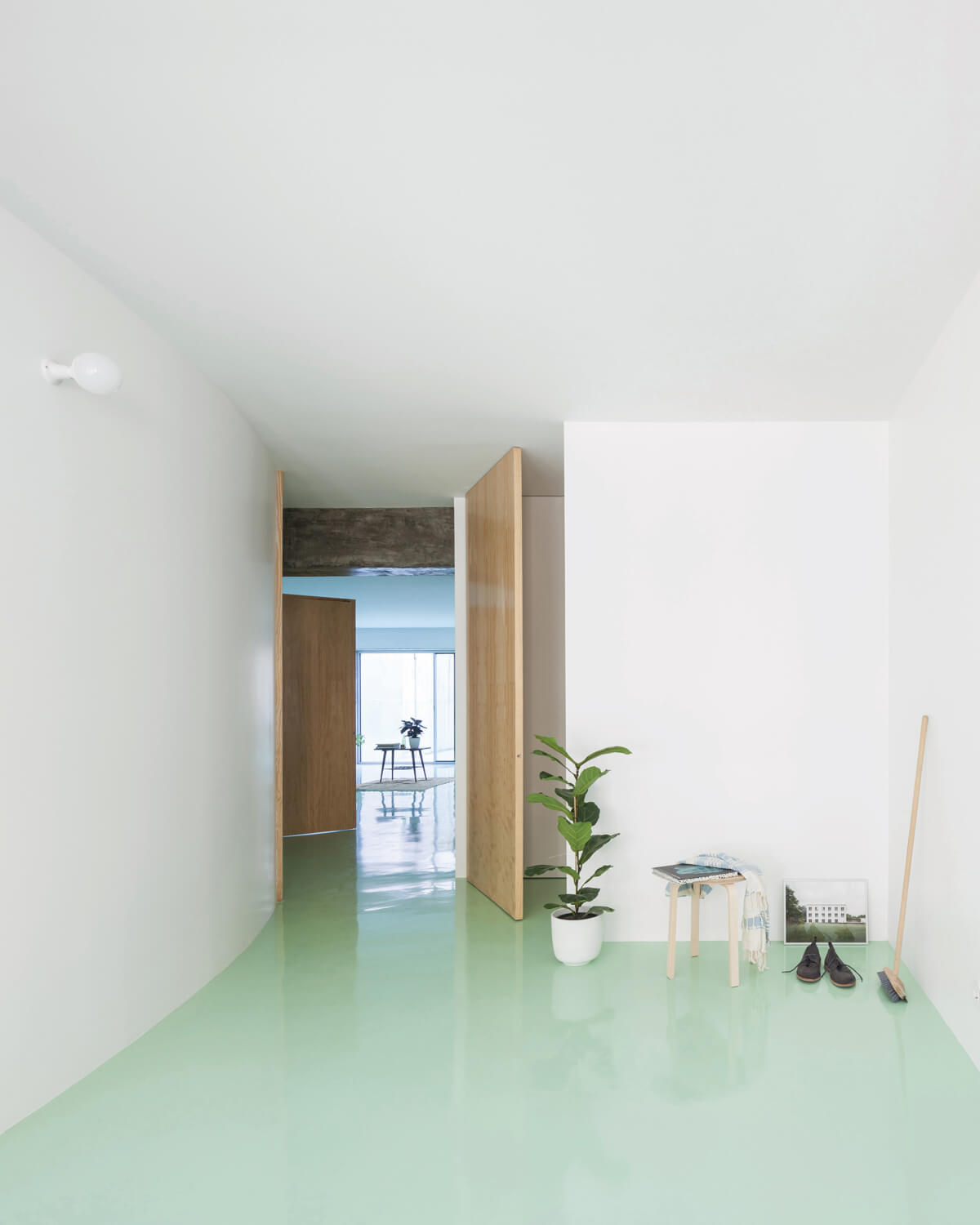 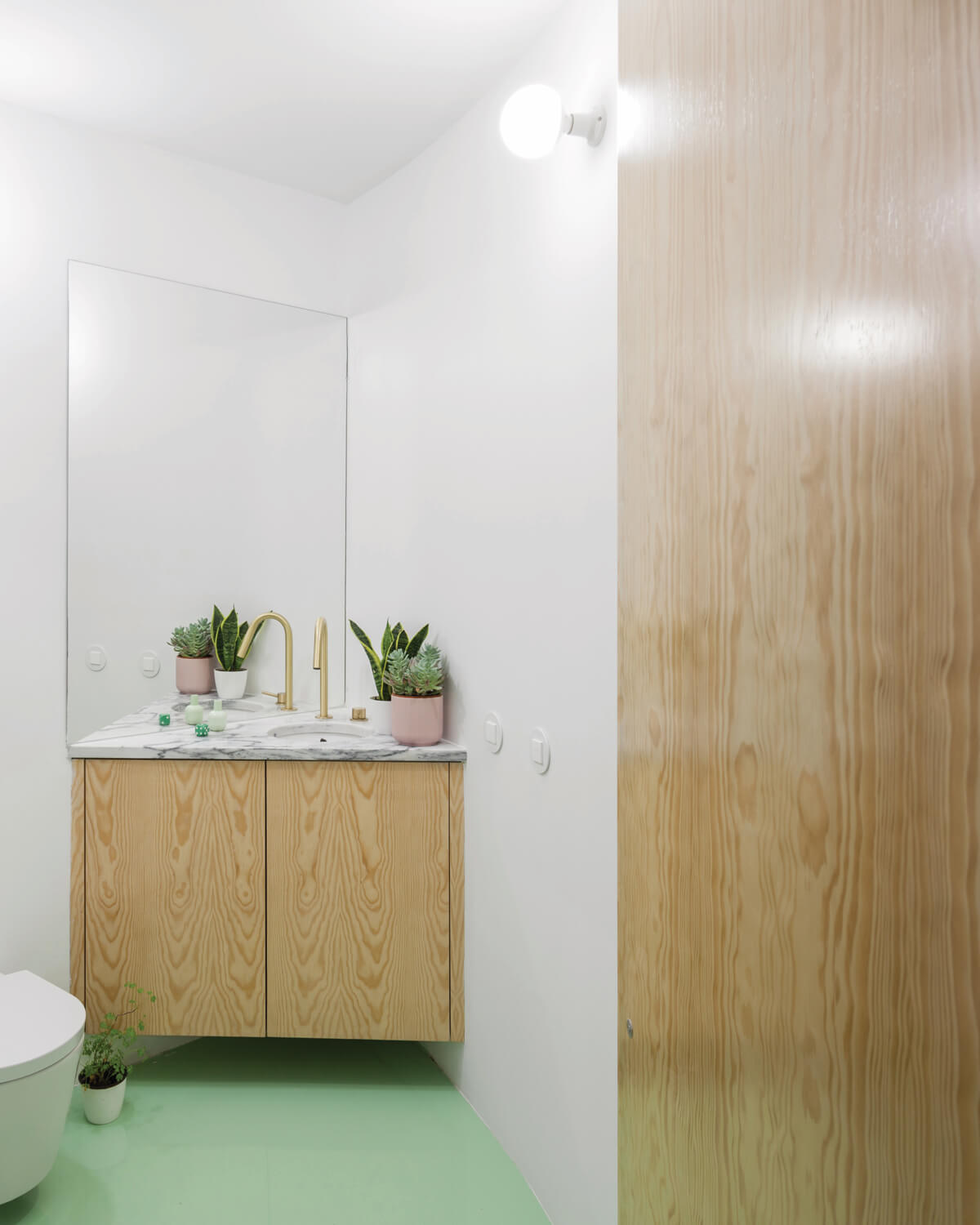 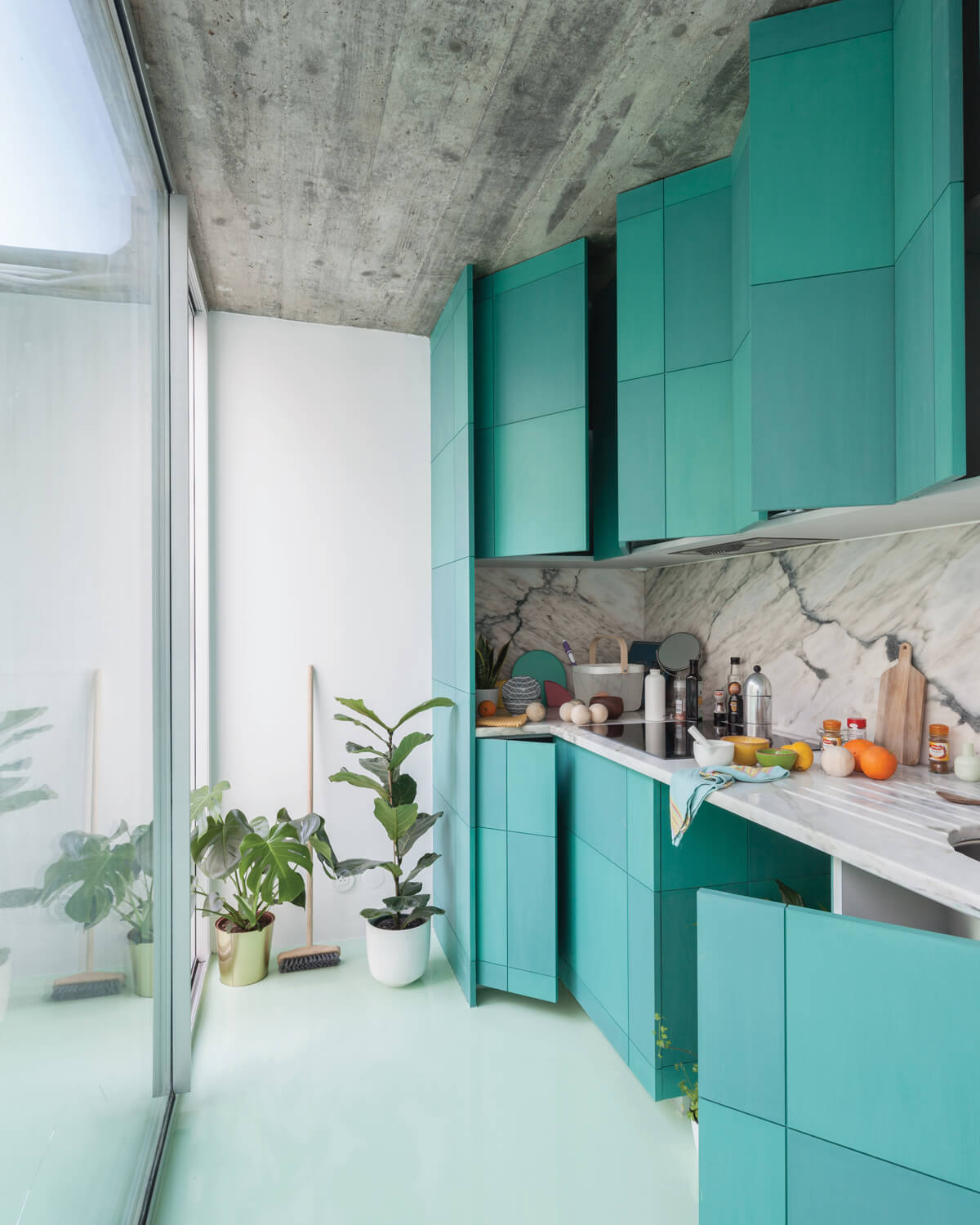 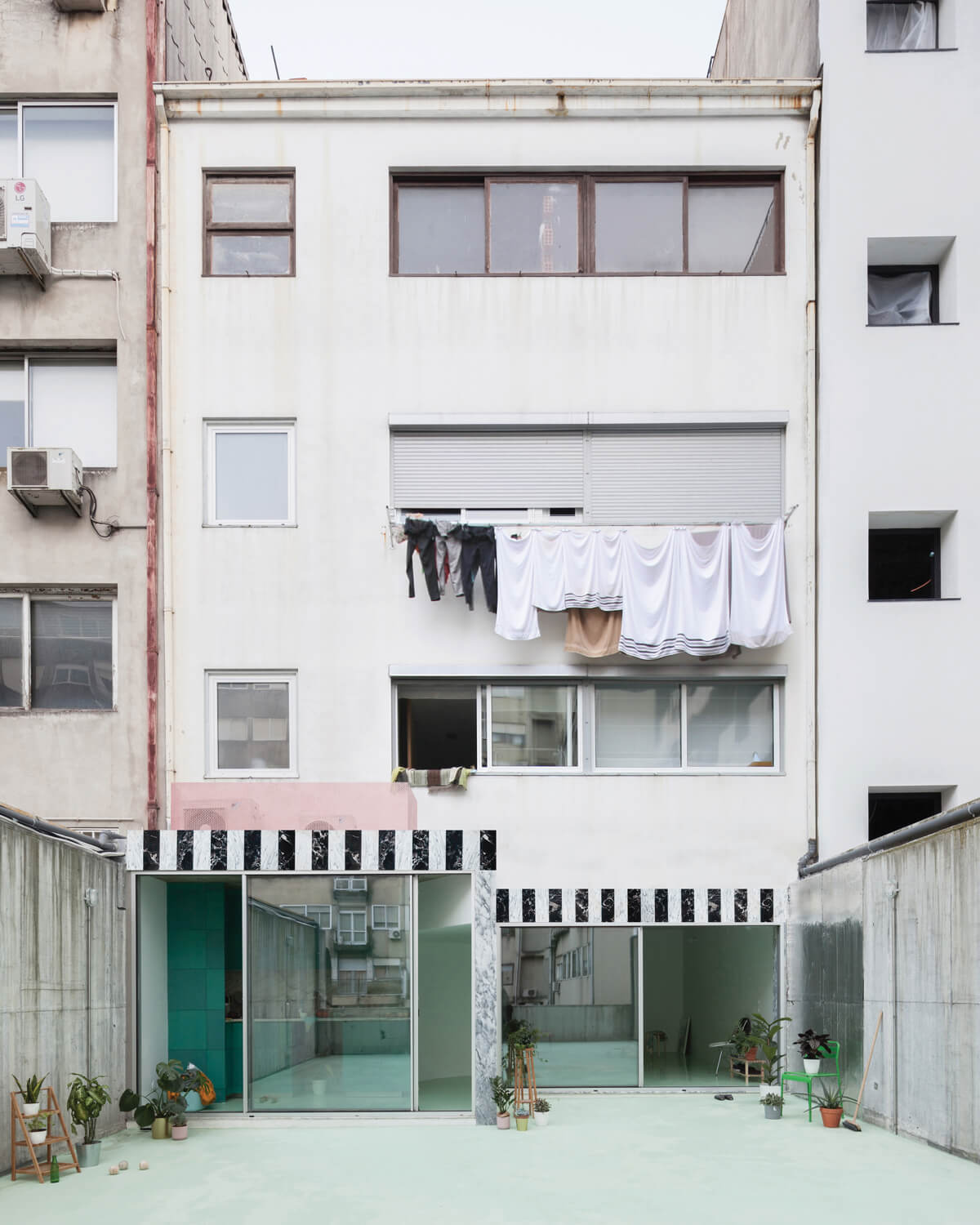 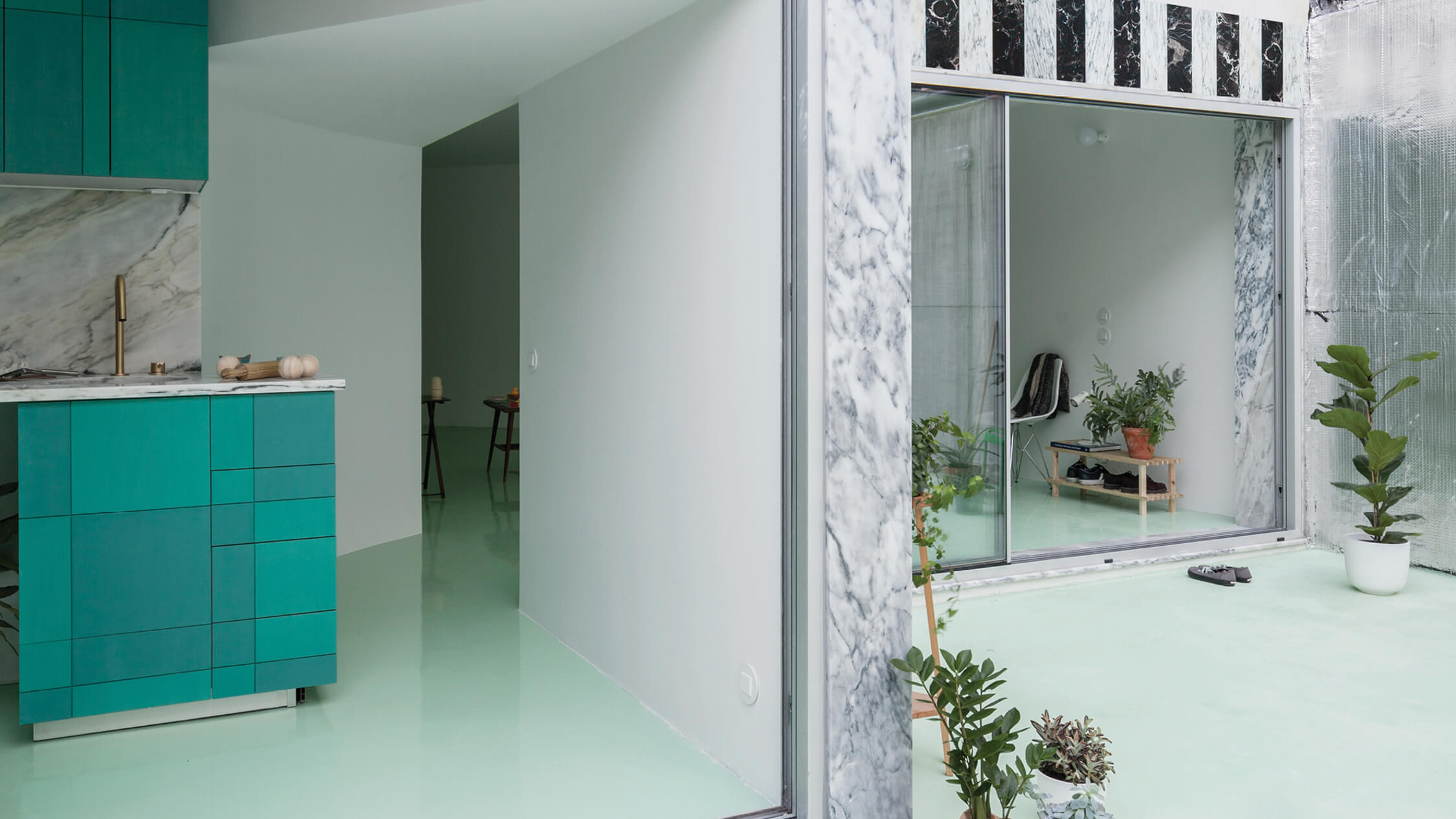 At the rear of the residence, a spartan galley kitchen runs parallel to the glazed wall looking onto the large outdoor terrace, almost basking in the sunlight streaming in. Wood cabinetry (stained in two green hues and paired with a richly veined marble countertop and backsplash) contrasts with the existing exposed concrete ceiling for a graphic effect that echoes elsewhere in the renovation.

Fala’s updates to the outdoor patio continue the playful mix of texture and tone within. “The new facade facing the terrace, generously open, hints at the modernism of the street,” says the studio. Bands of white and black marble cladding surround the sliding partitions to create a bold threshold into the kitchen and living spaces that carries the pictorial quality found throughout the studio’s oeuvre (their renovation of São Brás House in Porto, for example, saw monumental navy blue and neon salmon doors update the historic facade).

“The project,” the five-year-old practice adds, “operates through a set of gentle oppositions between existing and added elements.” With much of the exposed concrete from the original structure left as is, the refined nature of the renovations are strategically layered alongside these raw elements to accentuate the contrast between old and new.

To unify the two bedrooms, washroom, living space and modest kitchen with the expansive terrace, the studio arrived at a graphic conclusion: a monolithic floor running the full span of the residence — inside and out. According to the firm, the mint-green surface “firmly binds all the house together,” unifying what was once a “convoluted main space, on the edge of fragmentation.”

Known for evocative representations that mix techniques borrowed from early abstract painting and collage with more traditional forms of drawing, the studio deftly adapted these two-dimensional planes into a striking assemblage of three-dimensional materials, palettes and forms. You might say it’s enough to make the neighbours green with envy.