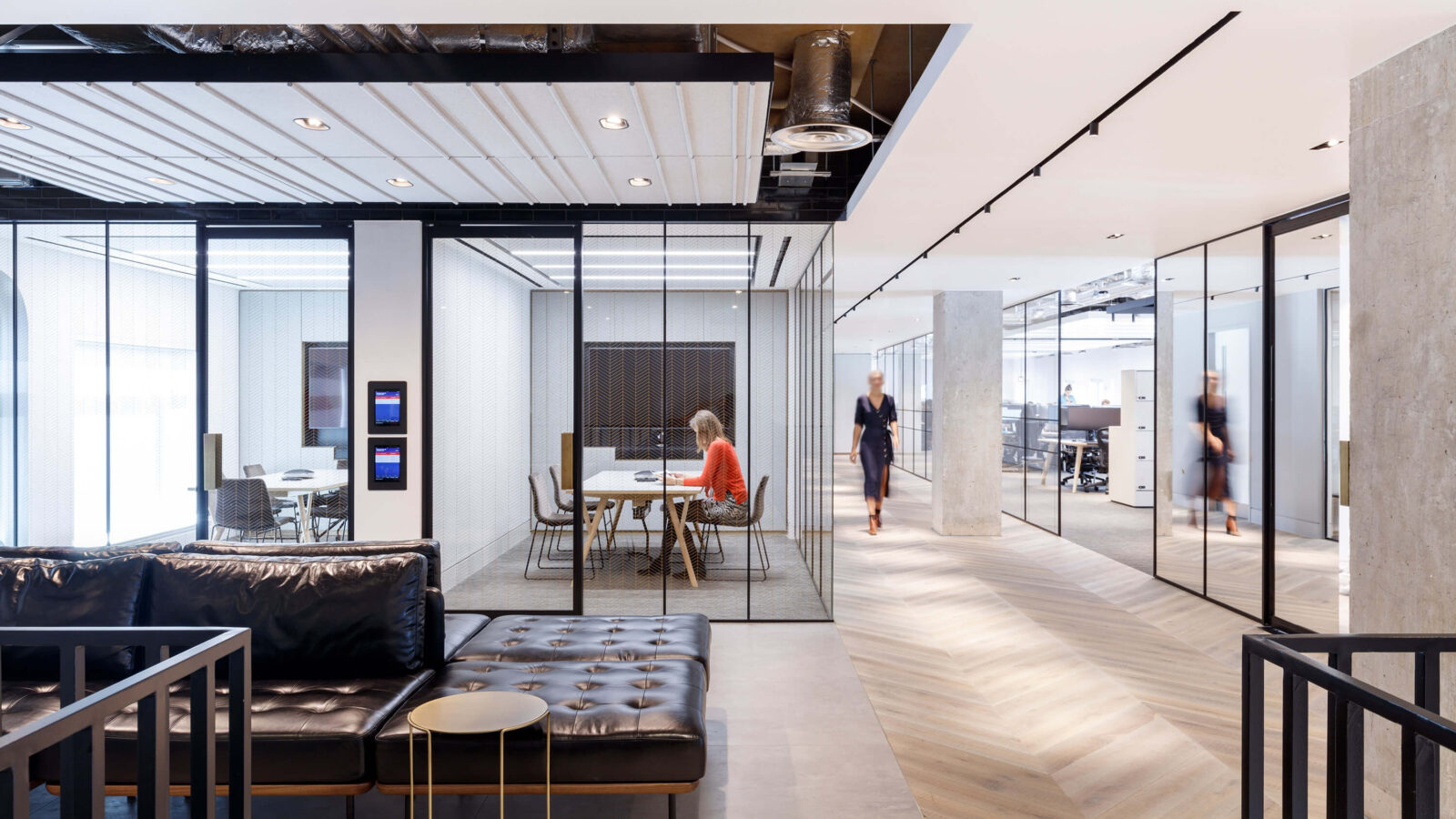 When London-based Dunhill, the British luxury menswear brand, moved its headquarters last fall from a red-brick Victorian structure in Marylebone to a 2,000-square-metre space across two storeys in nearby Mayfair, the transfer didn’t take staff very far physically, but it was significant in every other way.

“In their previous office, teams were broken up by floor, and there was different furniture everywhere and lots of bits and props tucked away behind doors in small rooms,” says Dani Salamon, associate director at MoreySmith, the design and architecture studio behind the new HQ. “There was much less work across teams and people didn’t bump into each other, as the environment just didn’t encourage it.”

The 170 staffers who work in the updated heritage building have access to a rooftop terrace. A skylight floods the premises with daylight.

Dunhill’s showrooms, previously housed on New Bond Street, are now on the same premises, as are its design studio and other office and meeting areas. “Transparency” is the catchword for the space, which features large windows on all sides, abundant gathering spots and some work areas separated only by glass walls.

The design and layout are physical expressions of the more open direction in which the brand wants to go. At the heart of the office, an imposing blackened steel staircase with leather and brass handrails prominently connects its two levels, while light wells on either side provide visitors and staff with dual-aspect views into the showrooms. A skylight channels natural light into the entire workplace, which also includes an easily accessible rooftop terrace. 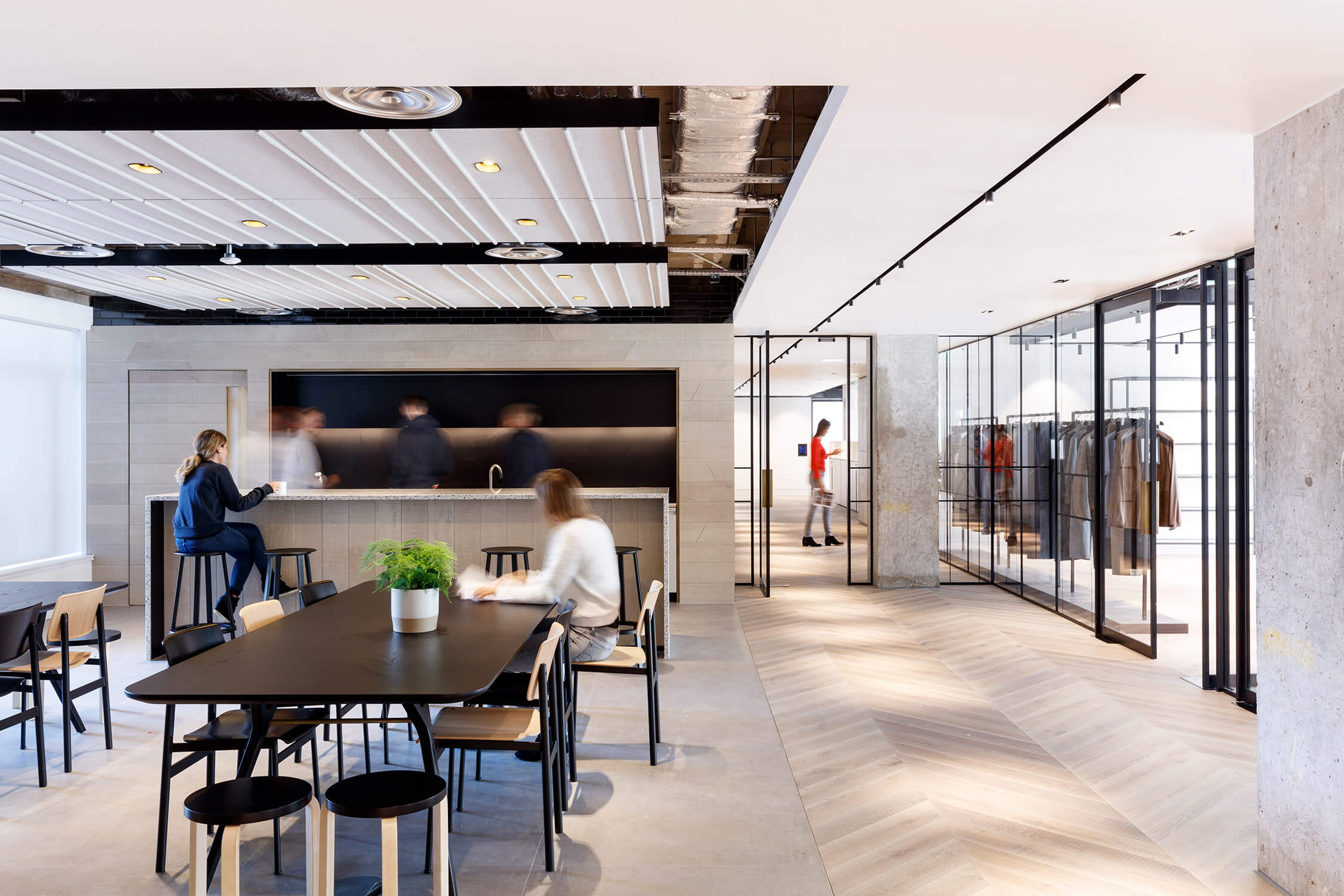 Instead of sitting at assigned desks, employees from the chief executive officer down have their choice of work areas, including communal tables.

Palette-wise, crafted materials have been widely employed but in contemporary ways, combining “industrial elements with really refined ones,” as Salamon puts it. The reception area, for instance, boasts black-marble-and-brass storage units, a wall composed of horsehair panels (a nod to the interlining in Dunhill’s lightweight suits) and a leather-clad, brass-trimmed desk with tactile cricket-ball stitching. The floors, meanwhile, are made of smoked oak arranged in an oversized chevron pattern (repeated in the showrooms and connective spaces), while the ceilings are exposed to create more height. Another wall in the entrance area features tubular brass lighting and concrete panels.

The design of Dunhill’s new headquarters has flattened hierarchies and eliminated barriers, benefitting the brand as a whole

Chevron timber flooring by White & White extends through much of the building. Rén lounge chairs by Stellar Works and a Lens coffee table by McCollin Bryan form a seating area.

Although the company is still composed of distinct departments, it now operates on a hot-desking system in which staff members, including the CEO, set up their laptops at a variety of desk types, from sitting and standing models to individual workstations and communal work tables. Employees make appointments or phone calls via internal messaging tools and use Skype instead of landlines, while small lockers provide enough space to store a few belongings overnight. Also in the mix are breakout areas, three kitchens (with monochrome terrazzo worktops) and quiet spaces or conference rooms that can be booked easily through Outlook. 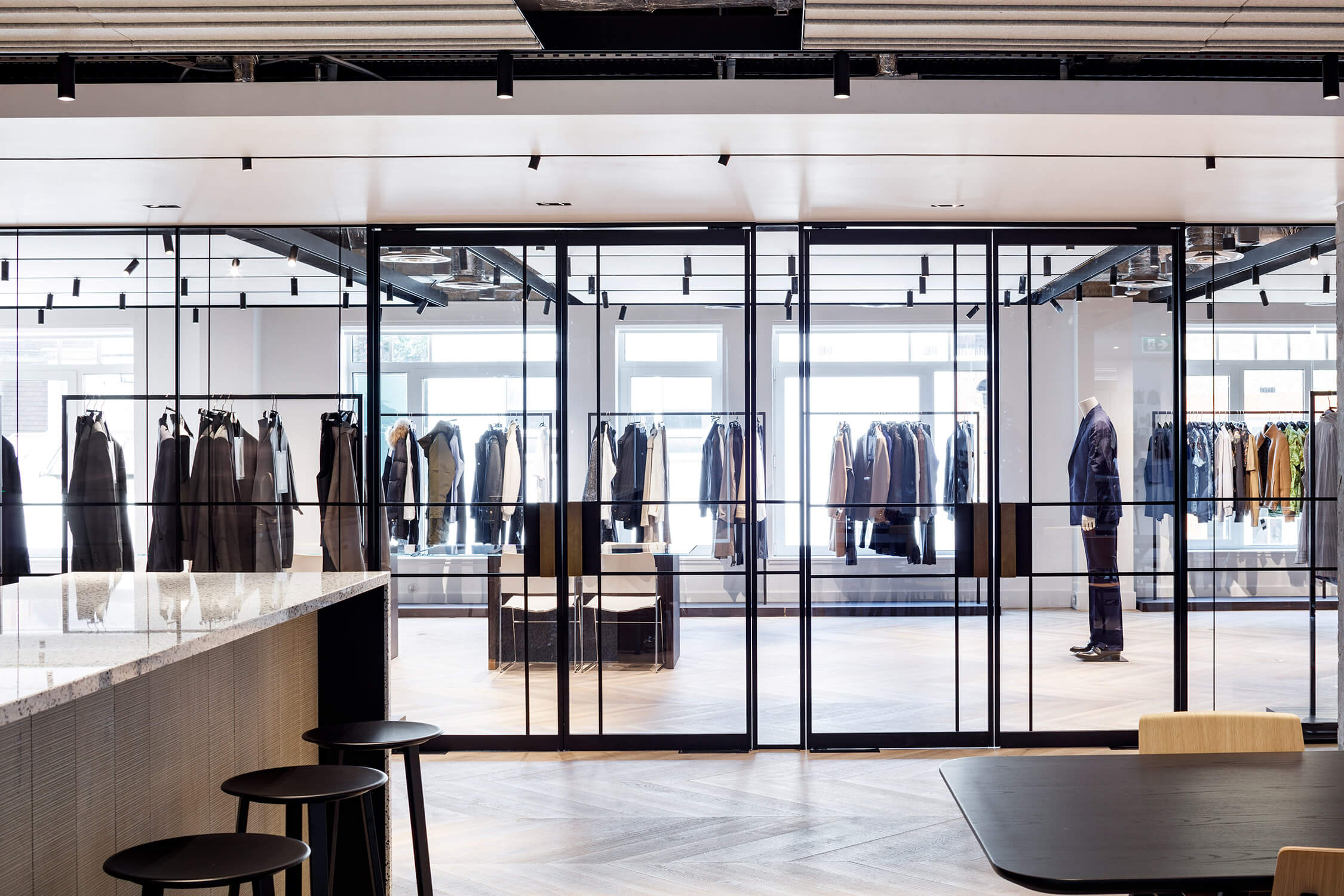 Previously located offsite, Dunhill’s showrooms have been integrated into the new facility, where they take up 362 square metres or about 20 per cent of the total space.

Salamon believes that the new design has flattened hierarchies and eliminated barriers, benefitting the brand as a whole. “The CEO is a hugely charismatic person,” she says. “Having people like that locked away in offices would be such a shame because you never get to learn from them.” The more efficient layout has also made the office more eco-friendly: With just two printers on site (one per floor) and general waste bins provided only in the kitchens and at each copy centre (alongside recycling facilities), people are encouraged to do much less printing and to create considerably less rubbish.

Last year, MoreySmith co-authored a report with The Future Laboratory on the workplace of tomorrow. Their projections ranged from sci-fi territory (highly responsive offices incorporating “thousands of sensors that interact with workers’ wearable devices and smartphones”) to the kind of flexibility evident in the Dunhill space: design that accommodates multiple functions under one roof and that addresses multigenerational workers who might have different ideals, expectations and needs.

“Human-centred design is the most important element we adopted from the report in this project,” says Salamon. “By offering Dunhill employees a range of activity-based spaces and quiet rooms, by giving them a choice of workspace, we have hopefully addressed many people’s needs.”