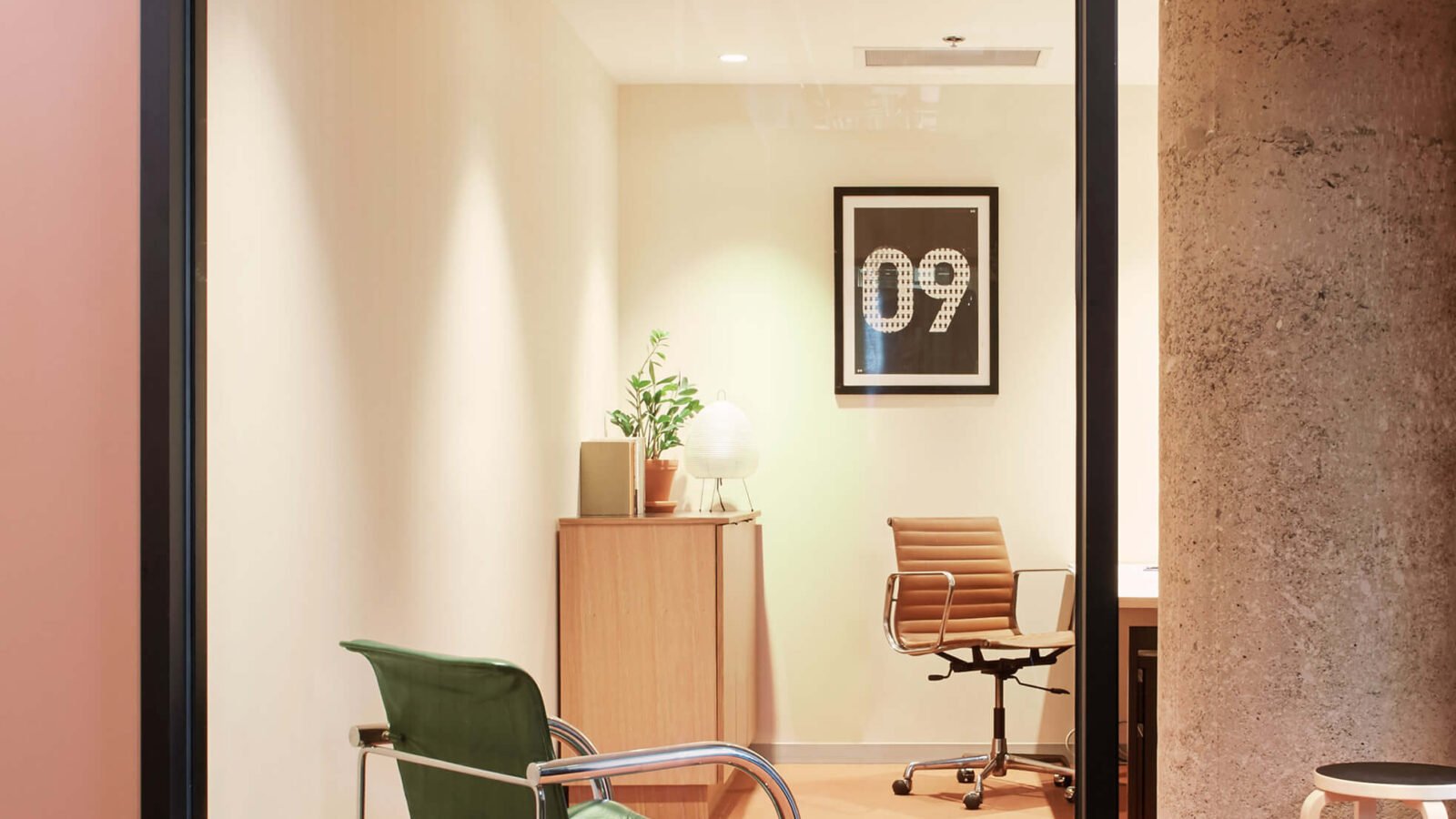 MSDS Studio Crafts a Contemporary Yet Classic Office for Junction59

Using unexpected bespoke elements, MSDS Studio carves out a modern home for a 60-year-old ad agency within a century-old building in Toronto

As the elevator doors slide open on the eighth floor of Toronto’s century-old Tower Automotive Building, the first glimpses of advertising agency Junction59’s new two-level office are revealed. In the lobby, trumpet-shaped concrete columns and terrazzo floors that date back to 1920 are juxtaposed with an oak tambour wall custom-designed by MSDS Studio, the Toronto firm behind the space’s look. Curving around the reception desk, the wall has a mid-century-modern vibe, yet the overall impression is surprisingly fresh. It’s reflective of the 1,114-square-metre project as a whole: As much as MSDS Studio nods to the histories of both Junction59 and the former industrial building it now occupies – the colour palette of earth tones, browns and terracotta, for instance, is based on its 60-year-old client’s early print ads – the studio also expresses a modern, forward-looking viewpoint.

MSDS principal Jessica Nakanishi heightened this frisson by using a sophisticated level of abstraction. Over the reception area, she hung a staggered grid of Cielo lights by Pablo Designs. “They are aluminum, which incorporates the history of Tower Automotive as a centre for casting metal car parts,” Nakanishi explains. But the wink is understated: While the cylindrical pendants recall pistons, their clean, crisp lines look sharp. 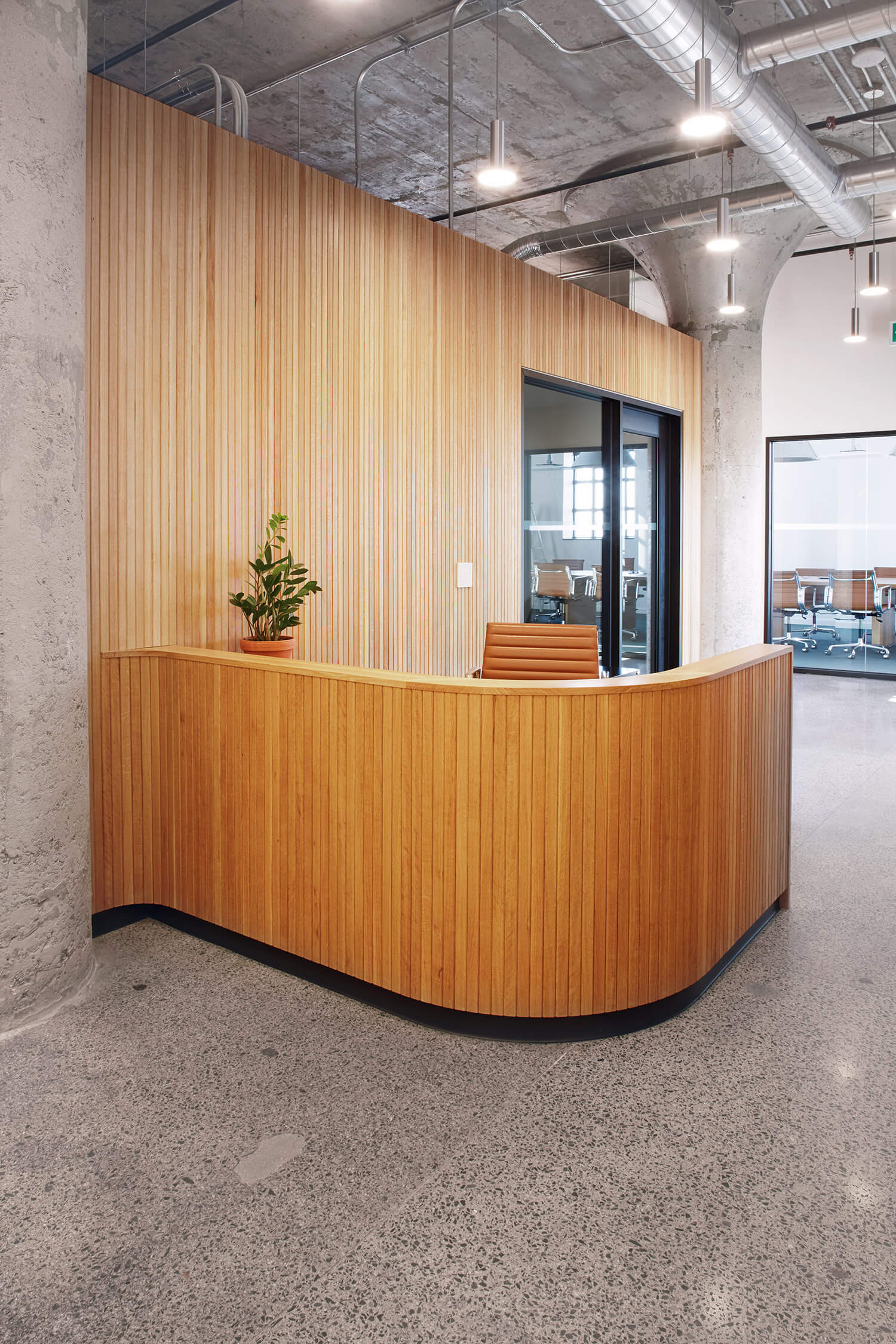 By introducing unexpected elements, the interior design avoids obviousness. To prevent the tambour wall from being overly Mad Men, it is contrasted with off-white rectangular wall panels – bleached slabs of particle board that have a sheen similar to that of polished limestone. The sustainable, cost-effective material – warmly spot-lit with tiny black sconces – provides bright contrast for two hunter-green waiting chairs.

Similar to the reception area, the adjacent boardroom might have become a simple mid-century time capsule if not for two well-considered, custom-created elements. The bespoke oak table and a series of oversized pendants rev up the space, which would have been dominated by the two dozen Eames Aluminum Group chairs – 1958 originals, and holdovers from Junction59’s previous office – that otherwise furnish the room. The lights’ simple cone shapes, wrapped in muted grey felt, are timeless, yet their audacious scale (each is as tall as a grade schooler) is highly impactful. 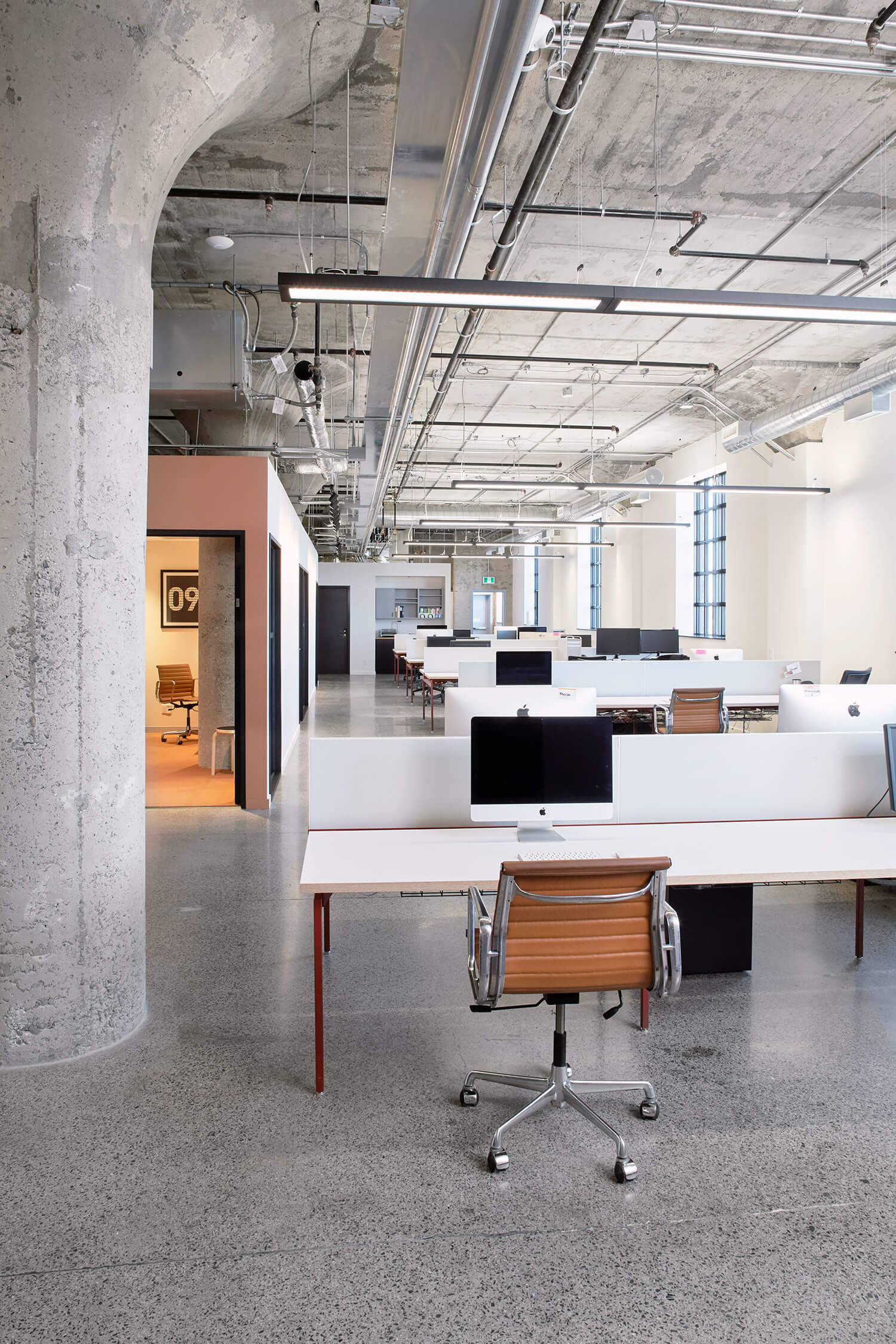 Perhaps the most updated aspect of Junction59’s new home – the lunchroom – is also the hardest to appreciate, at least at first glance. “In our old office,” says Daniel Di Stefano, the agency’s CFO, “we had a huge, underused lobby, disparate work stations and a tiny kitchen where people would only ever heat up their food, then eat at their desks alone. There was no sense of togetherness.”

The new office flips the script. The lobby is relatively compact to allow for a capacious, kitty-corner lunch area. It features the same oversized cone lights as the board room, suggesting equivalent importance between the spaces. And it has enough Jasper Morrison–designed stools and seats to accommodate just about all of the 55 staff members at once. They ring a long communal table or sit opposite ribbed banquettes upholstered in buttery leather. A massive island reinforces what makes the kitchen special: It’s crafted from imported Italian terrazzo that echoes the floors’ material – and has two beer taps for get-togethers after hours. 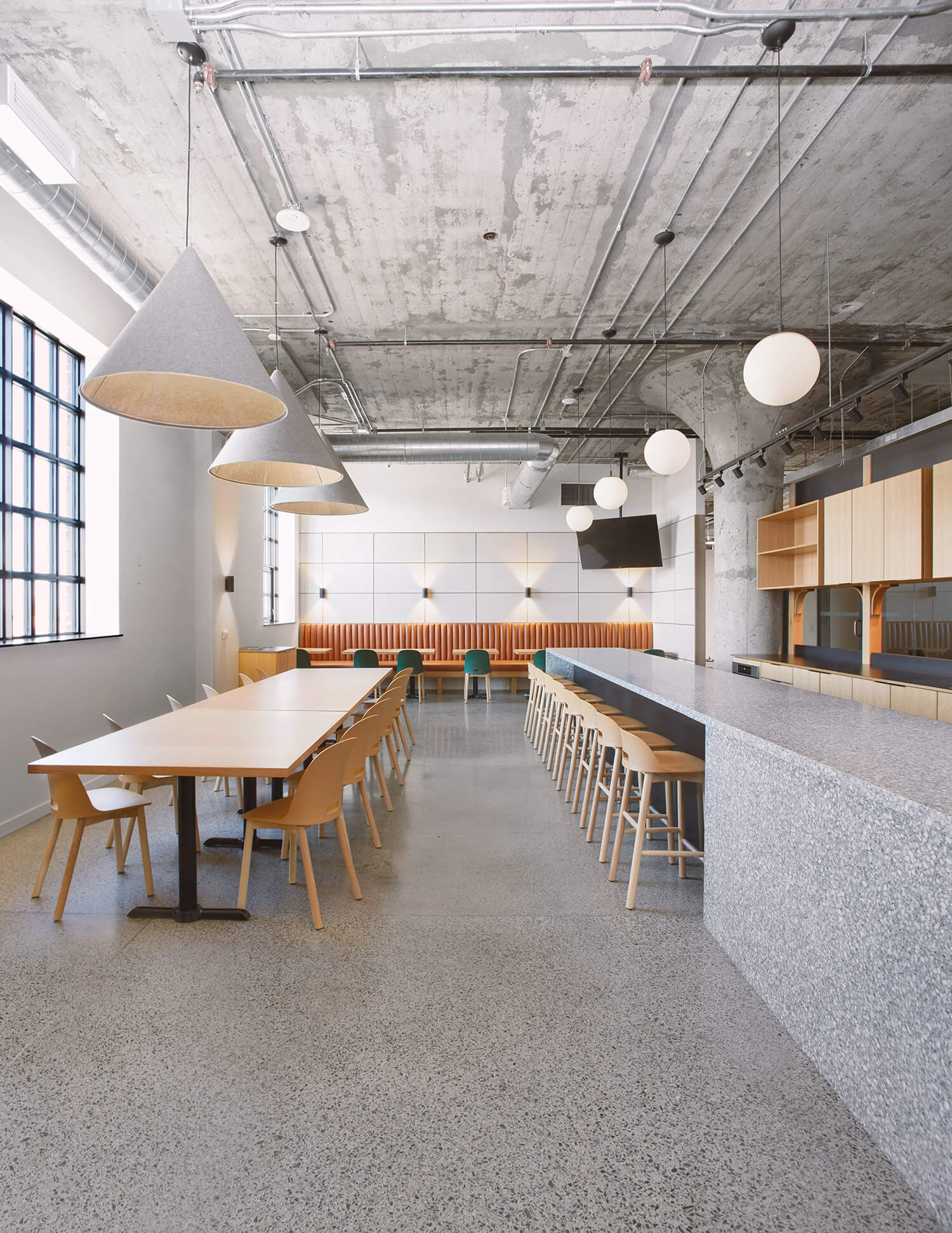 For the work zones (with the exception of rooms that require quiet, all of which are consolidated in a central, terracotta-painted block comprising the executive suites, audio/video editing areas and a few intimate meeting spaces), everyone collaborates at long, shared desks. The open area’s lack of privacy is offset by its proximity to an east-facing bank of sash windows that provide views of downtown.

The desks themselves are three-metre-long seam-free Antenna Workspaces from Knoll. Nakanishi specified them because she liked the contrast between the contemporary white tops and the red, ’50s-ish legs, but also because they have structural posts only at the ends. “That way,” she says, “if a new employee starts, they can comfortably add an extra workstation without intermediary legs getting in the way.” In other words, as Junction59 changes, the design has the flexibility to keep growing.

Using unexpected bespoke elements, MSDS Studio carves out a modern home for a 60-year-old ad agency within a century-old building in Toronto