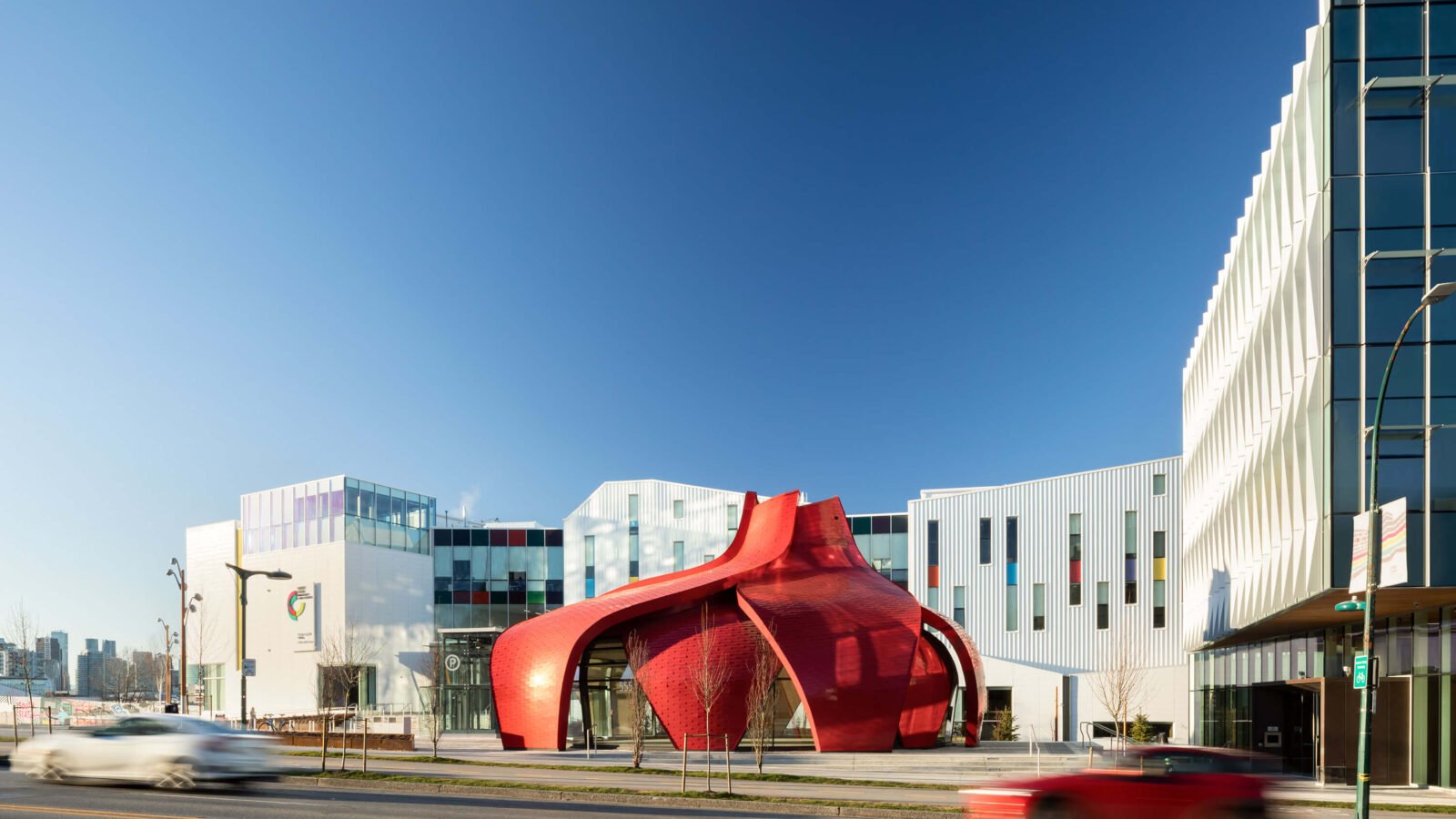 The building is anything but subtle, and that is precisely the idea. Designed by the local office of global firm Perkins+Will, which worked closely with developer client Chip Wilson, the flower-shaped structure is meant to be what principal-in-charge Ryan Bragg describes as an “attractor.” Acting as a magnet for social congregation, it brings new vitality to the heart of the Emily Carr campus, which is itself key to the transformation of False Creek Flats, the city’s former rail yards. 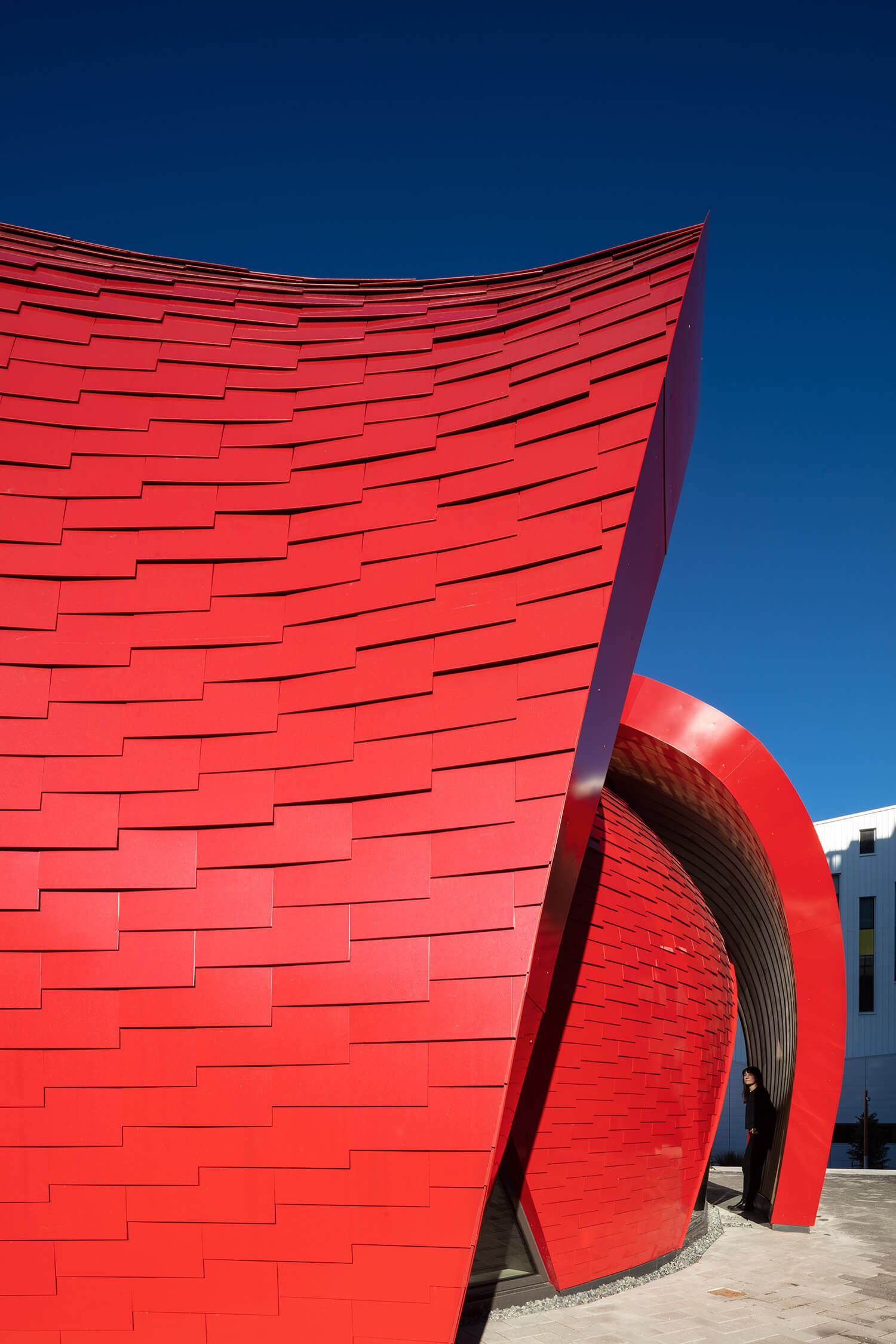 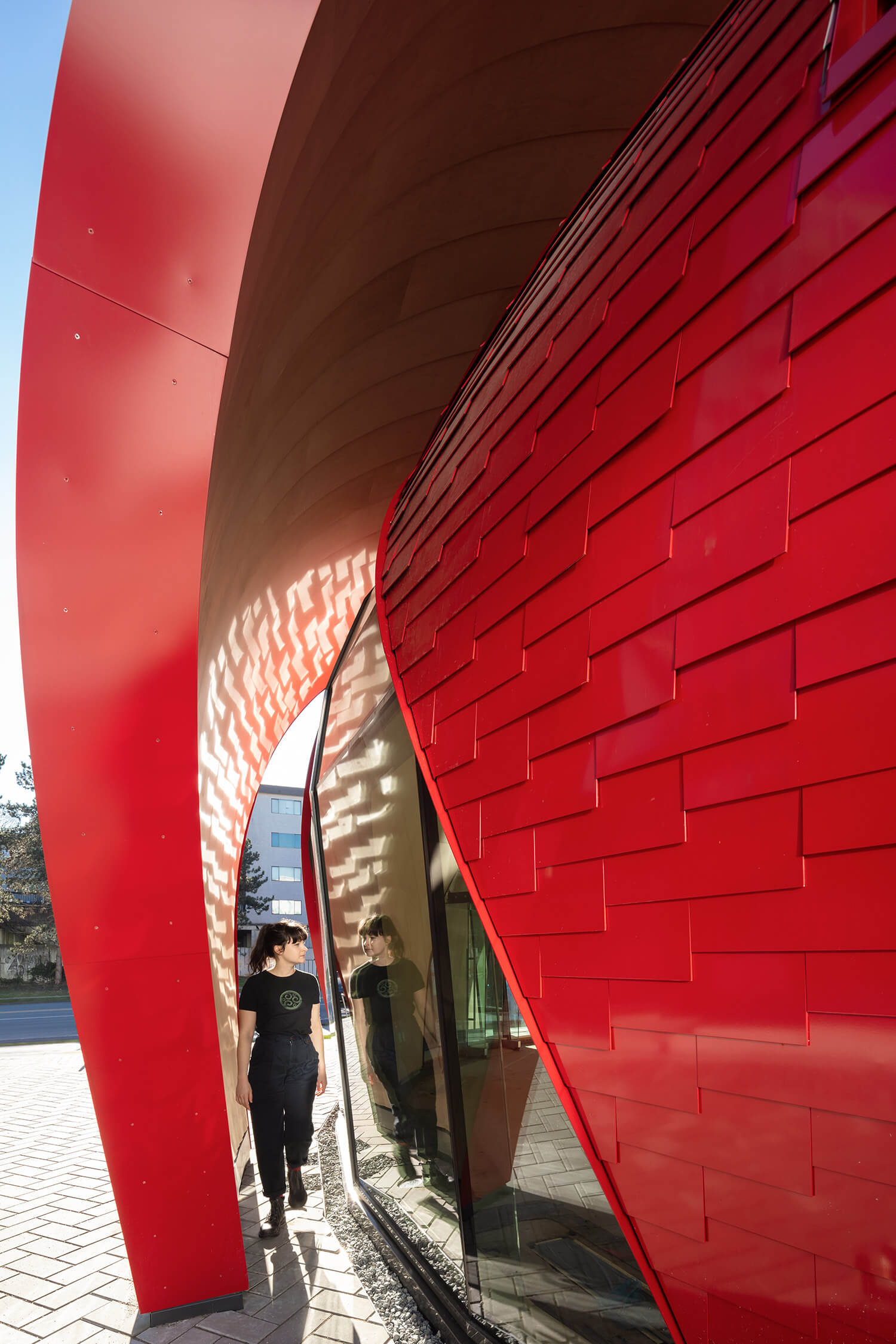 The pavilion comprises 10 double-curved petals constructed by architectural fabricator Spearhead. Each is built with a waffle-grid structure supported by glulam column beams.

As the project designer, Perkins+Will director of innovation Yehia Madkour employed Alucobond composite aluminum shingles to provide the Red Pavilion’s signature colour. The product was chosen for its colourfast coating, applied with a process that fuses two shades to create a shimmering surface that refracts light. Other colours were considered before settling on red, Madkour says, “but Chip felt this shade would be the best attractor.”

Beneath the off-the-shelf skin, the petals conceal structural innovations of which Madkour is understandably proud. From the start, he considered the pavilion a research opportunity, taking the idea of producing curvilinear timber structures of unprecedented scale to the Autodesk BUILD Space in Boston. Prototypes were accomplished using nail-laminated timber (NLT), which was computationally configured in the shape of petals and fabricated using a five-axis CNC router. 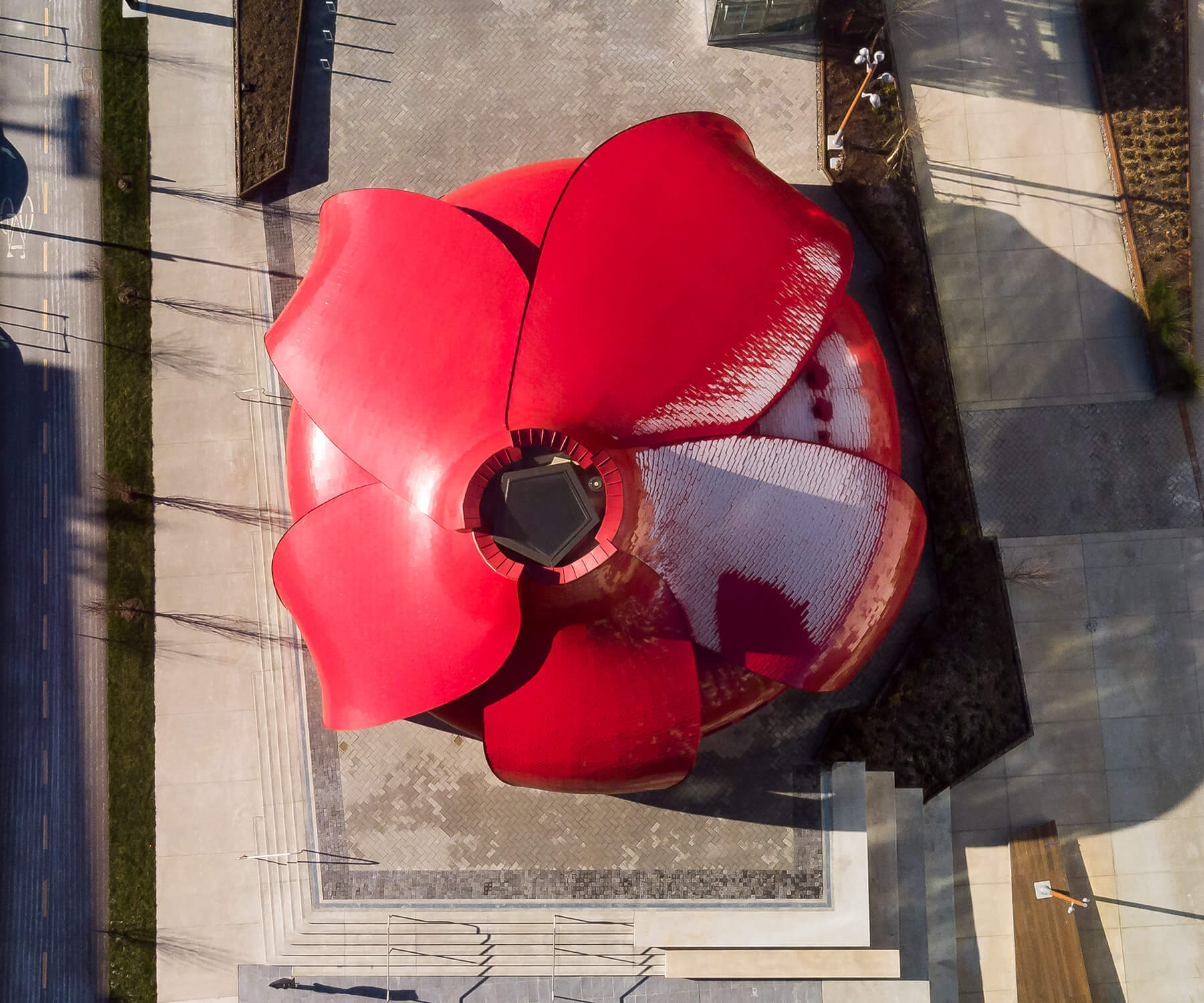 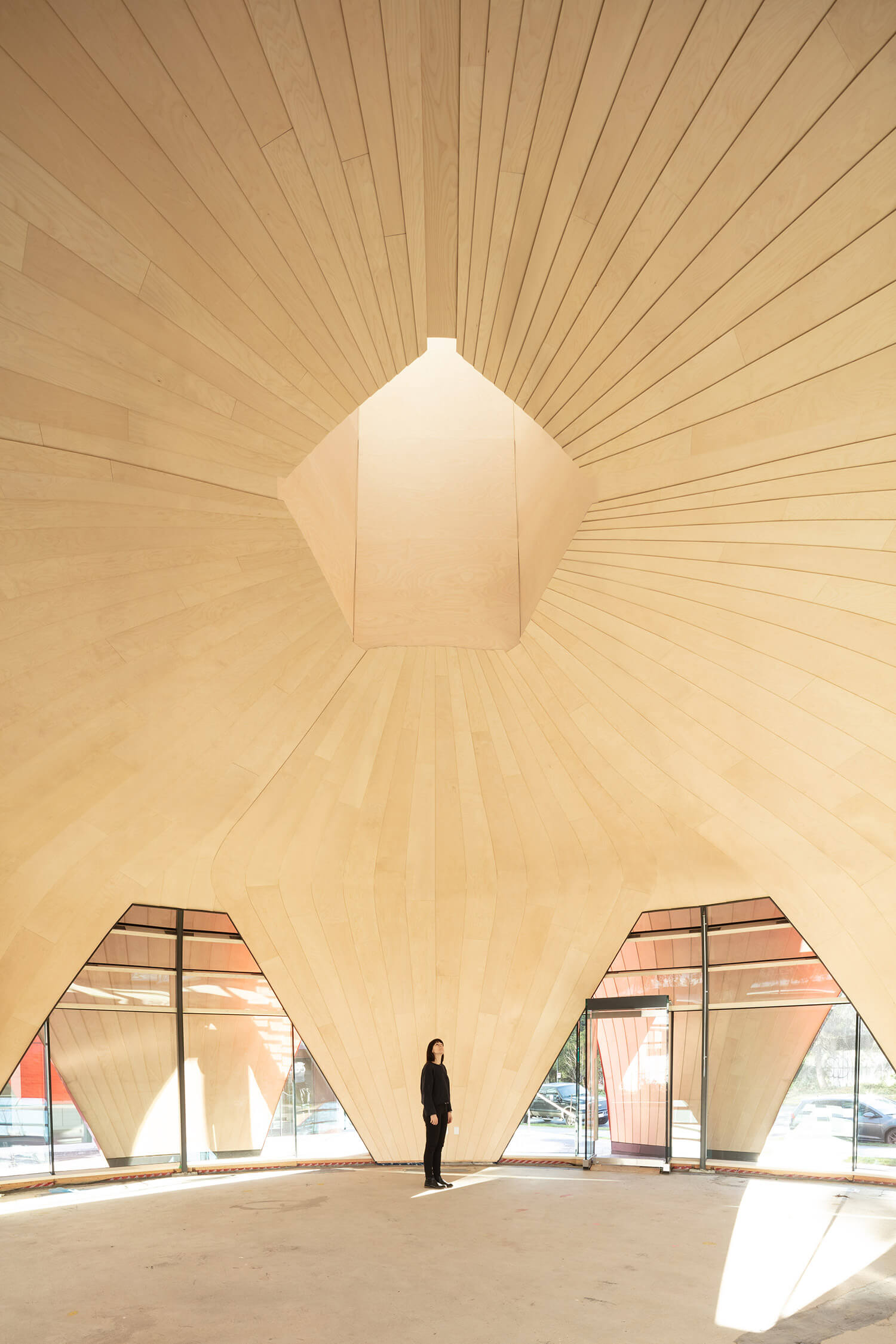 The interior is lined with overlapping strips of pale birch plywood. Overhead, a central oculus floods the space with natural light.

With the NLT prototypes as proof of concept, Madkour worked with engineers to optimize the petals, ultimately settling on a waffle structure of curved glulam column beams with steel-plate splines, laminated strand lumber purlins and plywood sheathing. Ten petals were constructed by Spearhead architectural fabricators in Nelson and transported in sections to the site. Half the petals shape the interior, anchored to a concrete pad and leaning into a circular steel ring beam. The five remaining petals are mounted to form the outer layer of the structure.

Entering the empty birch plywood–lined interior stirs the same sense of serenity that one suspects was intended for two other structures that this project may evoke: Hariri Pontarini’s Bahá’í Temple in Chile and Patkau’s Temple of Light at the Yasodhara Ashram near Kootenay Bay, B.C.; Madkour says he is aware of these works but that they were not a direct inspiration. Be that as it may, those two structures were intended as places of worship, and Bragg and Madkour both describe the Red Pavilion as a place of “congregation,” which soon will be devoted to Vancouver’s own signal sacrament: coffee. Nemesis Coffee opens shop in the structure later this spring. 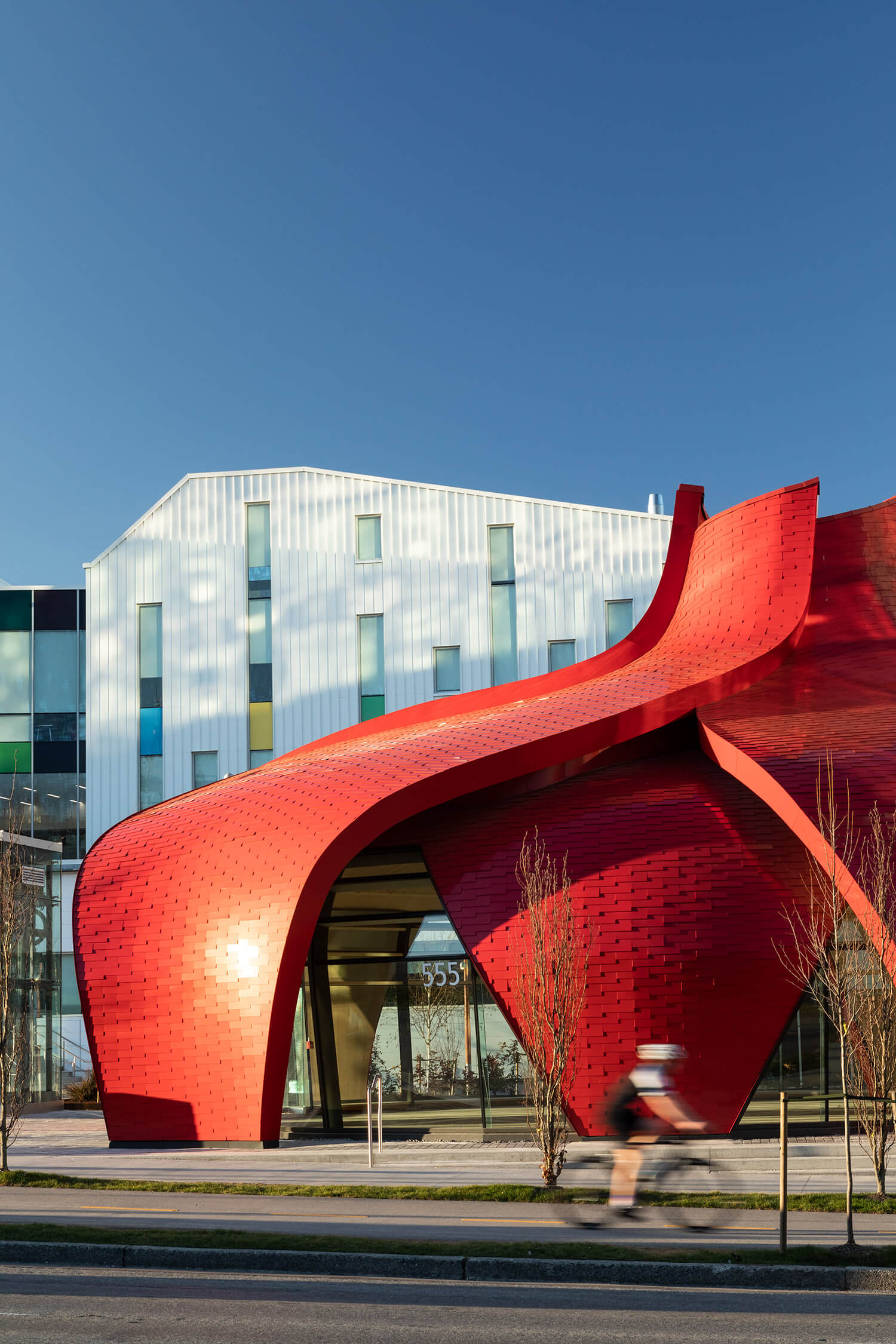 Soon to become a coffee shop, the Red Pavilion is a new landmark for the redeveloping False Creek Flats neighbourhood.

“It’s the best program we could have hoped for,” Madkour says of the new tenant. If drawing bees to flowers was the original idea, he’s also expecting this place to buzz. “It’s going to be a real destination when it opens,” Madkour says. “The serenity will still be there, but it’s going to be busy.”  ca.perkinswill.com