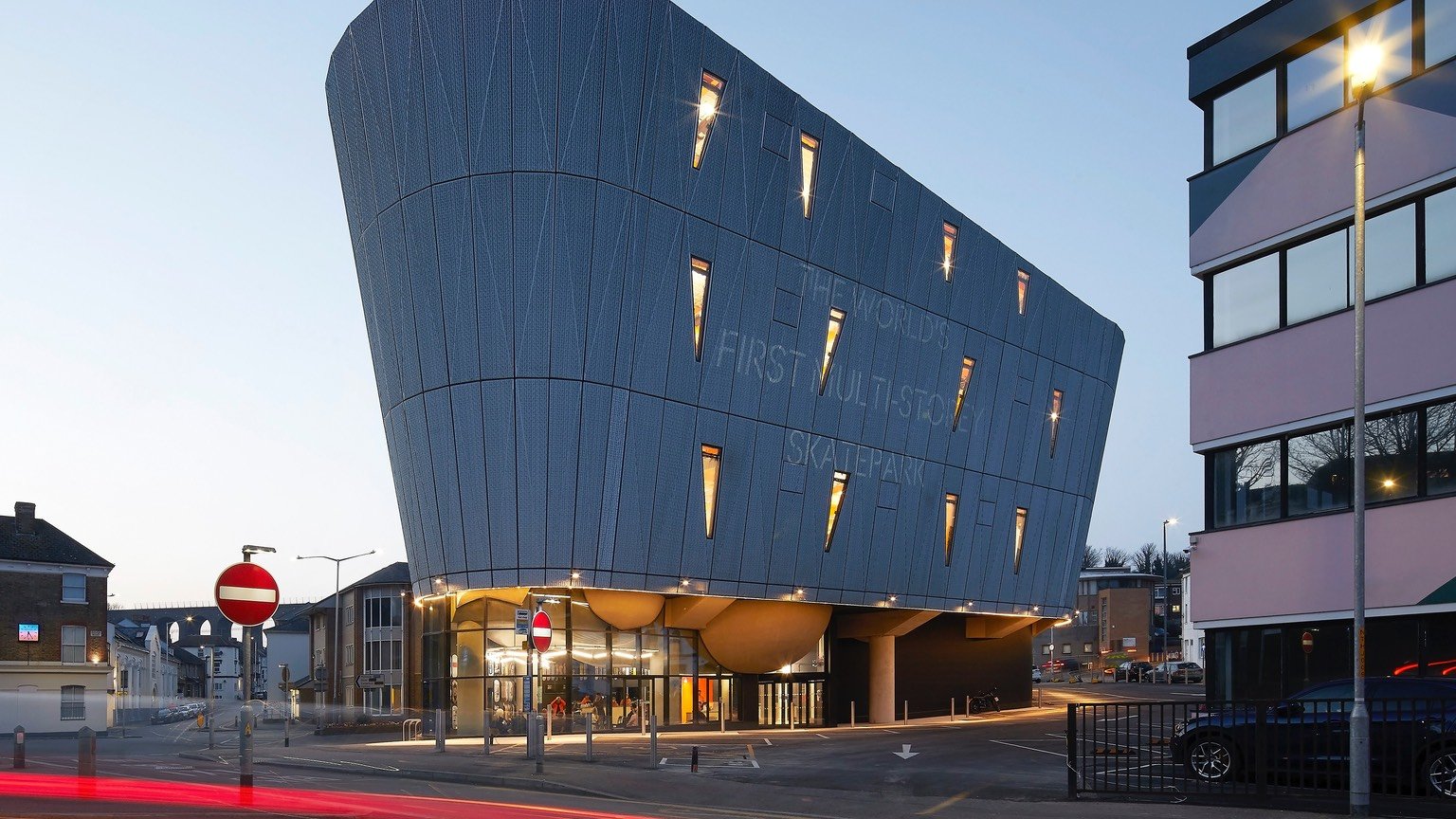 Hollaway Studio swaps out a defunct bingo hall for a high-adrenaline skatepark — and sticks the landing.

Youth are the future — and Folkestone, U.K. is eager to let them know it. The port town’s newest attraction is F51, the world’s first multi-storey skatepark. Built on the site of a former bingo hall, the building represents a symbolic passing of the torch between the community’s older and younger generations. 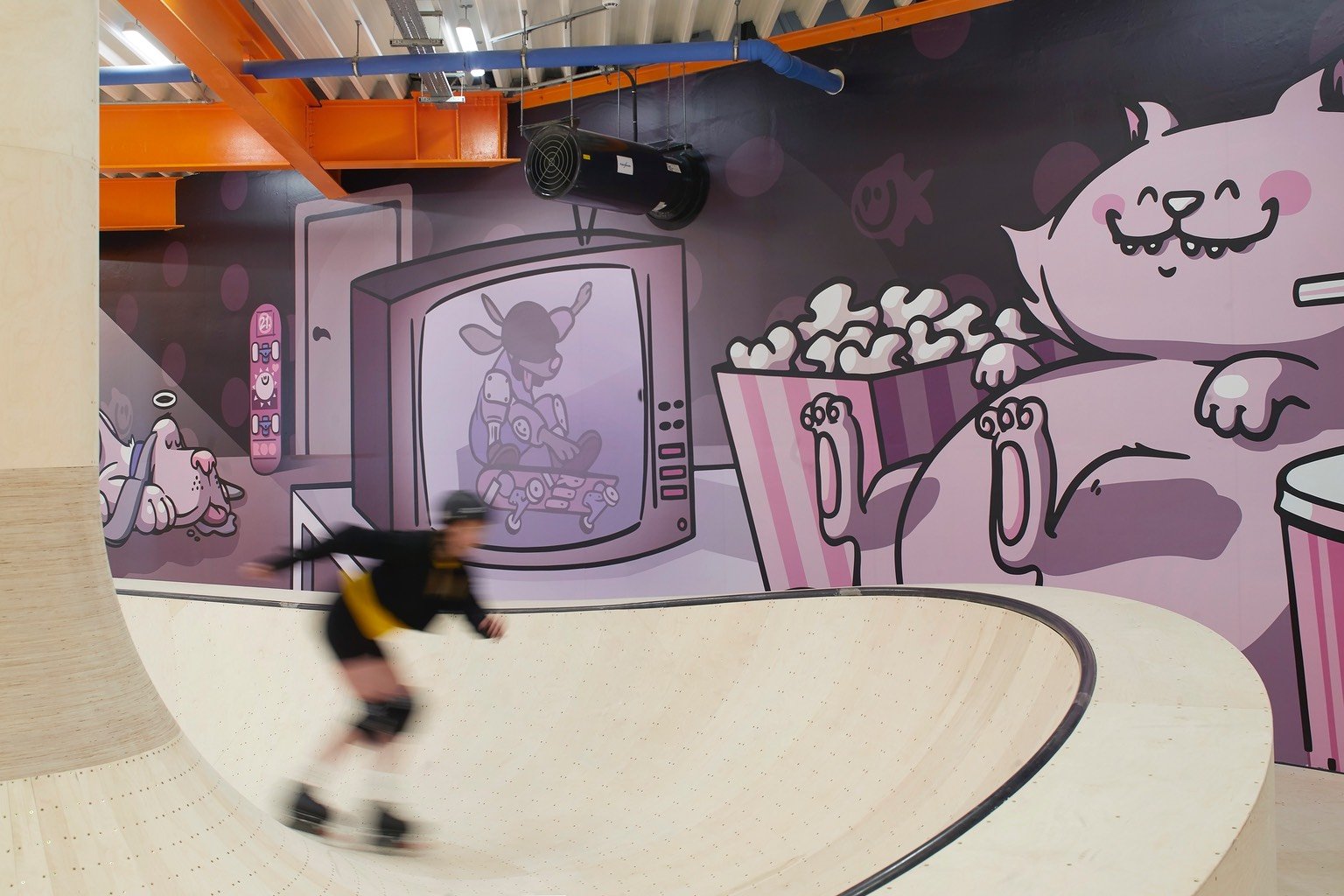 F51’s designers, Hollaway Studio, describe the project as an “adrenaline building,” and the facility lives up to this expression in more ways than one. First and foremost, it plays host to a teenage thrillseeker’s holy grail of extreme sports, accommodating not just skateboarding but boxing and rock climbing as well. At the same time, the building was also designed to amp up the energy in Folkestone’s downtown core. 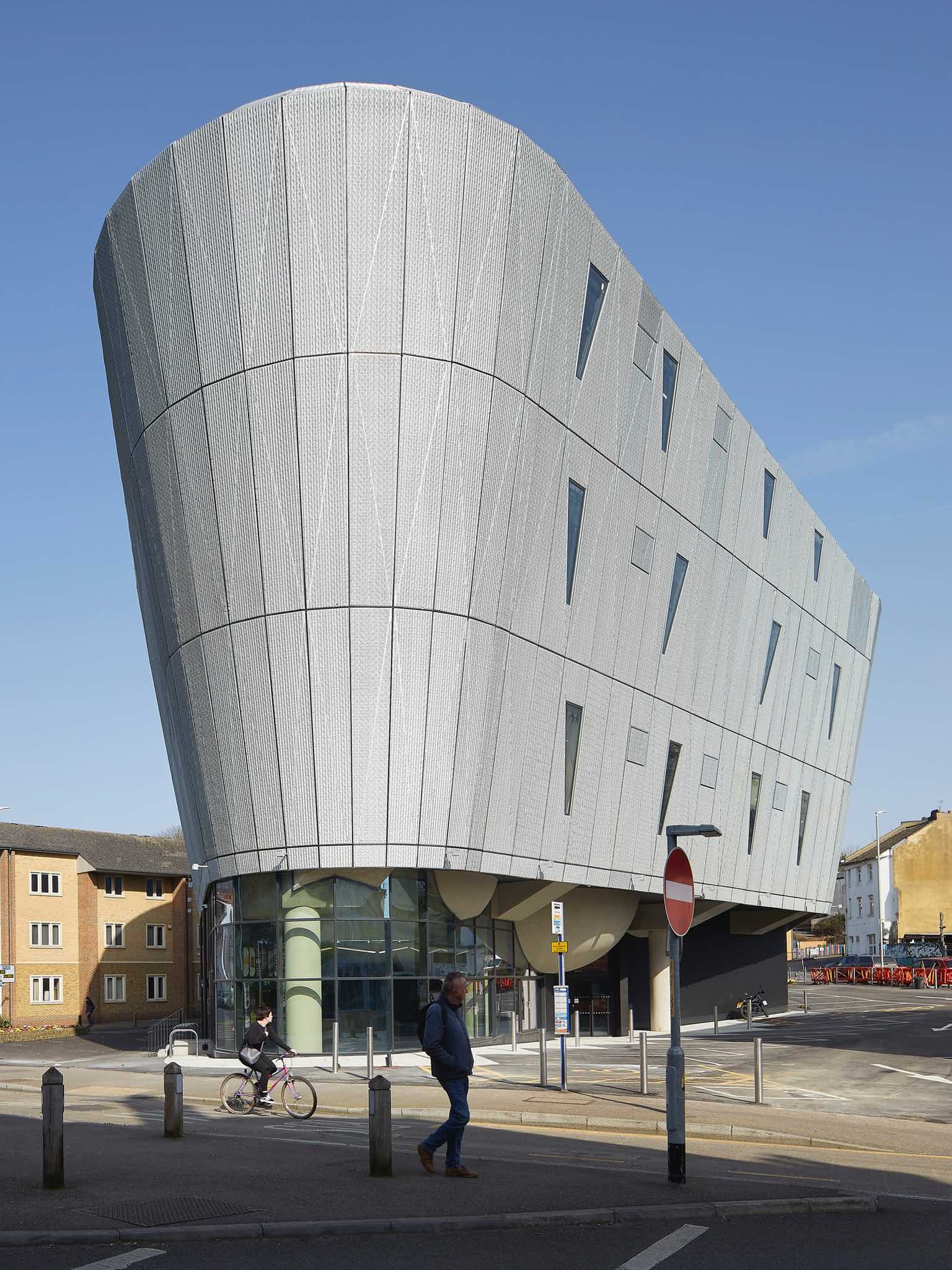 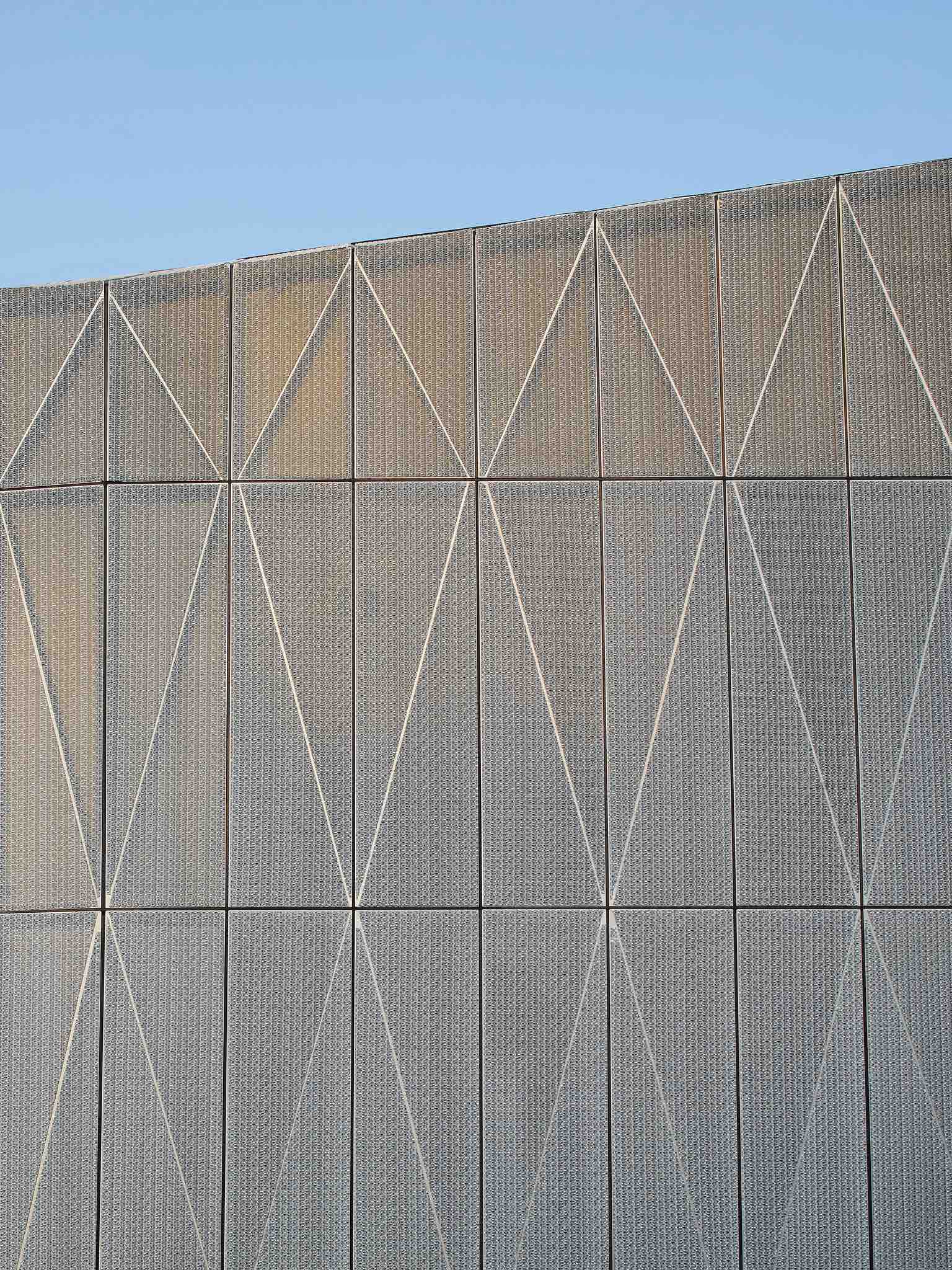 Built in mesh-clad concrete, the whale-shaped structure brings a bold new landmark to the area, which is gradually being reimagined as the Folkestone Creative Quarter. F51 is funded by Roger De Haan, the multi-millionaire chairman of British company Saga, which sells insurance packages, vacations and other products and services targeted to the 50+ crowd. After spearheading numerous other Folkestone revival projects (including the nearby performing arts venue Quarterhouse), De Haan turned his attention to Folkestone’s youth.

In 2020, 32 per cent of the town’s children were found to be living in poverty — making the need for a compelling recreational hub all the more pressing. To best serve this population, memberships to F51 cost just £1 per month for those who attend schools in the area. By providing an alternative to screen time, the building also highlights the benefits of daily exercise. It’s designed to be the type of controlled environment that supports safety but also allows for a healthy degree of risk — an important part of developing confidence and self-esteem.

“We’re shrouding our children in what feels like cotton wool to protect them all the time, but I think — as the world becomes safer — a controlled adrenaline facility is what young people need,” says Hollaway Studio principal Guy Hollaway. 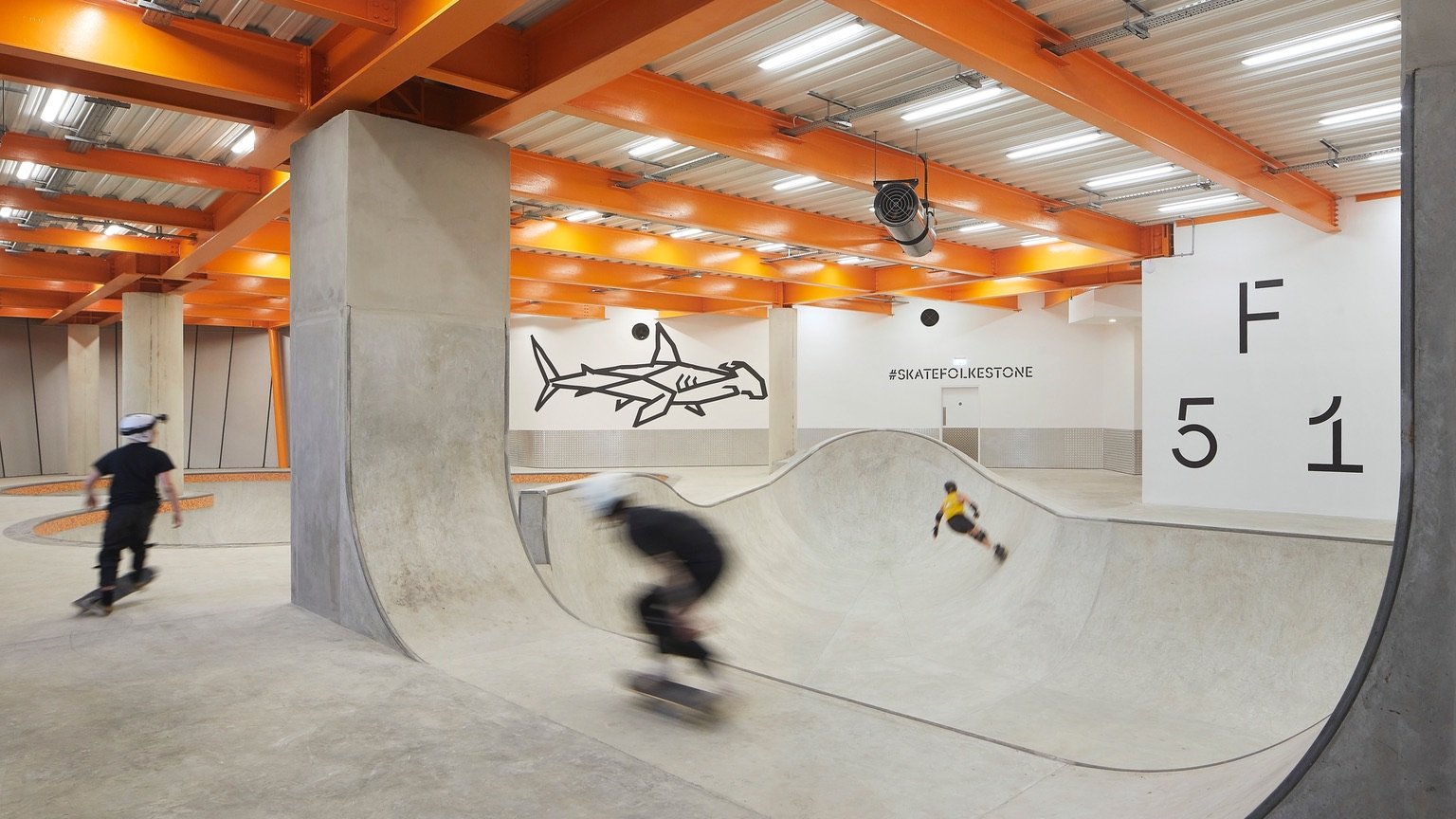 To ensure the facility’s stacked skateparks can be used by skateboarders of all skill levels, Hollaway collaborated with the experts at Maverick Skateparks. One of their many bright ideas was to model part of the spray-concrete “bowl floor” after the empty swimming pool that became a favourite hangout of the “Z-boys” in Dogtown, California. 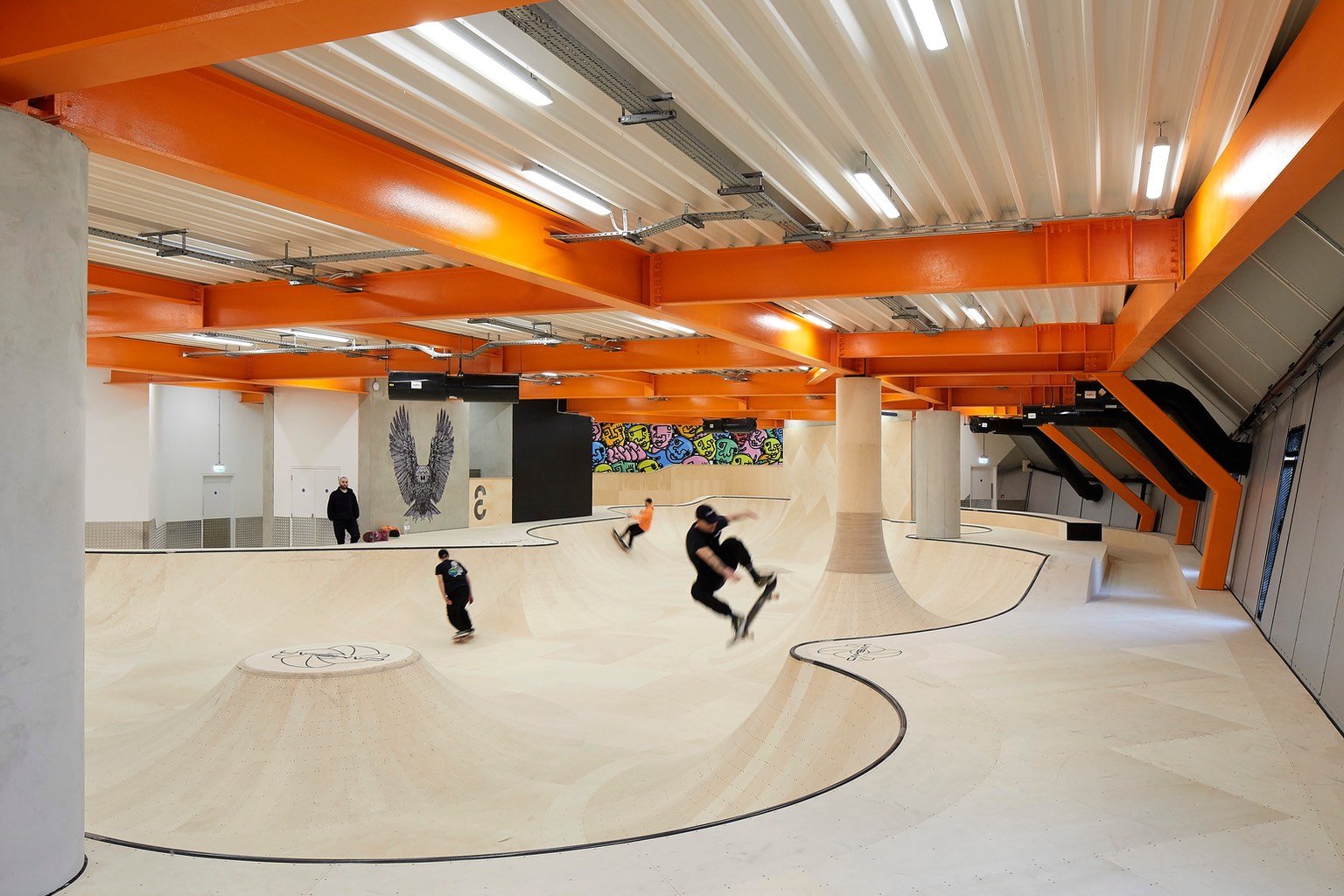 Additional levels cater to other styles of boarding. The street park floor uses plywood timber to recreate a typical urban environment complete with stairs, railings and benches, while above, more plywood shapes a flow park floor filled with curved walls that allow for continuous movement without the need to constantly propel oneself. 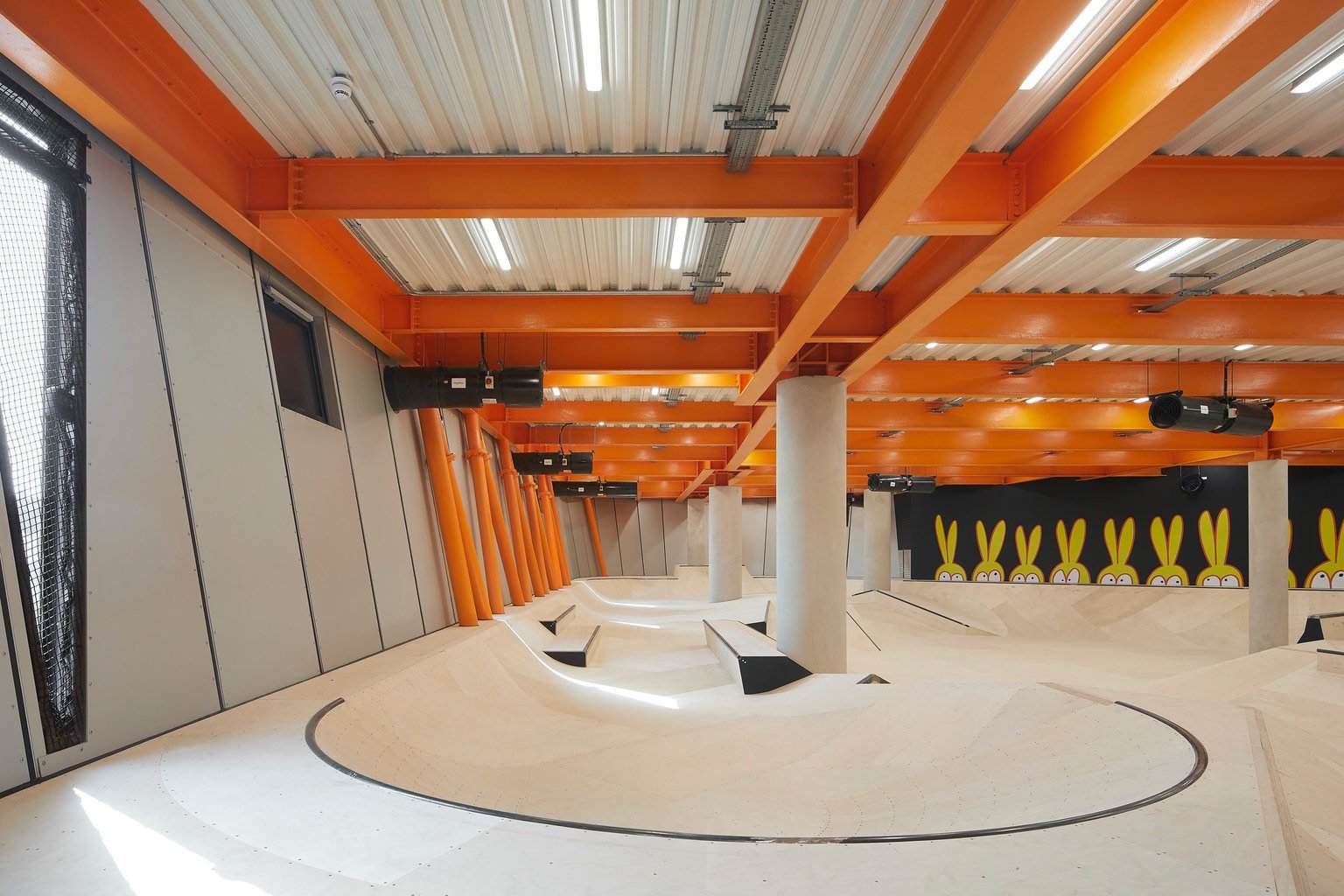 Throughout these environments, bright orange beams evoke the look of city infrastructure — think: traffic lights and crosswalks — while also drawing attention to the impressive engineering that Cambian Engineering Solutions developed to support the building’s innovative arrangement of stacked skateparks.

“We’re going to have skaters skating above your head and you’ll be able to hear the wheels of the skateboard going into the bowl right above you,” says Hollaway. “How often does somebody come along in your career as an architect and say ‘Build me the world’s first multi-storey skatepark’?” 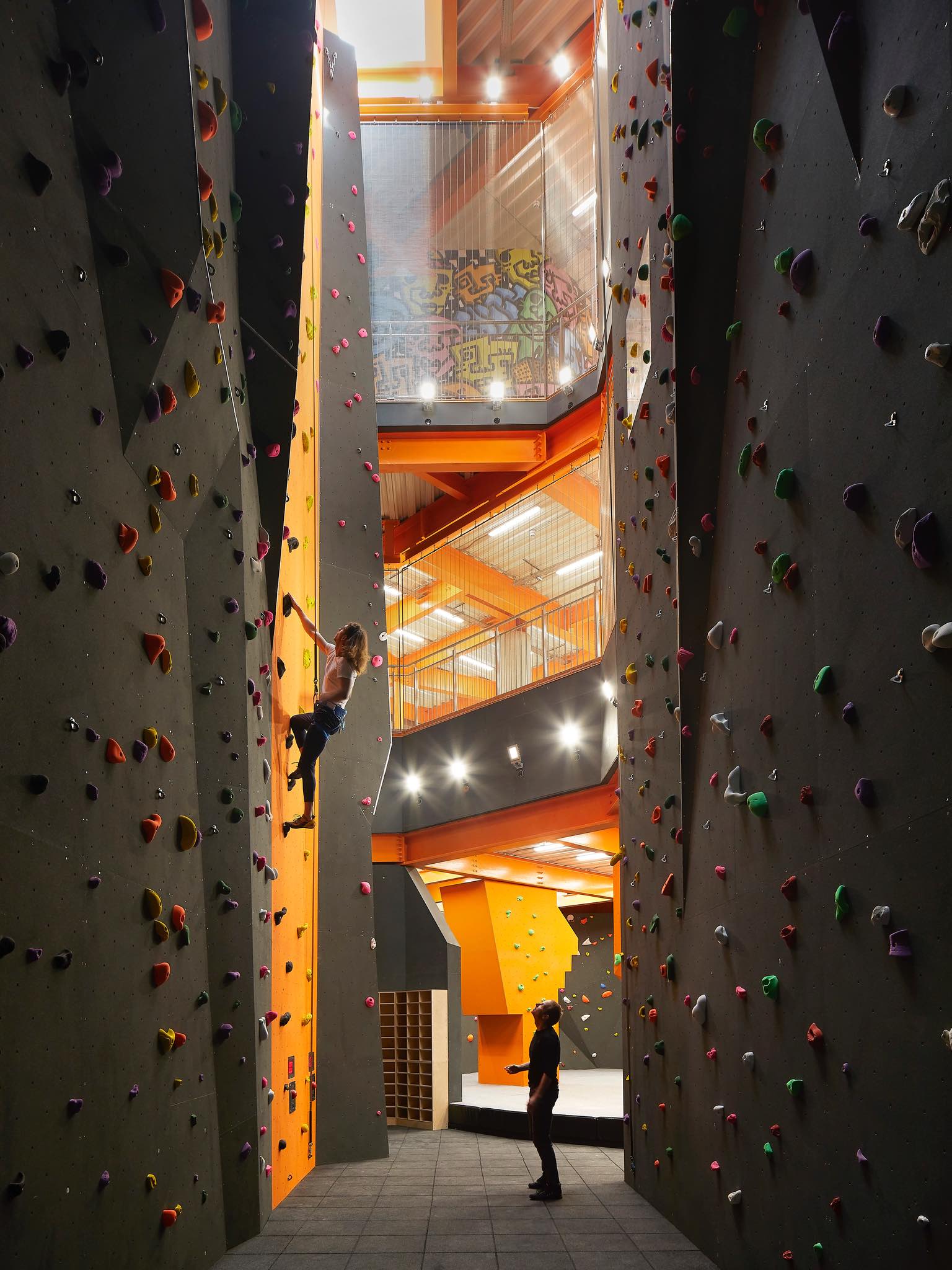 Another key recreational draw, F51’s rock climbing facilities include a 15-metre-high lead wall that spans all three skate floors, as well as speed-climbing walls and an additional bouldering area. In total, the building features 3,000 holds, allowing for courses that cater to a range of different skill levels. 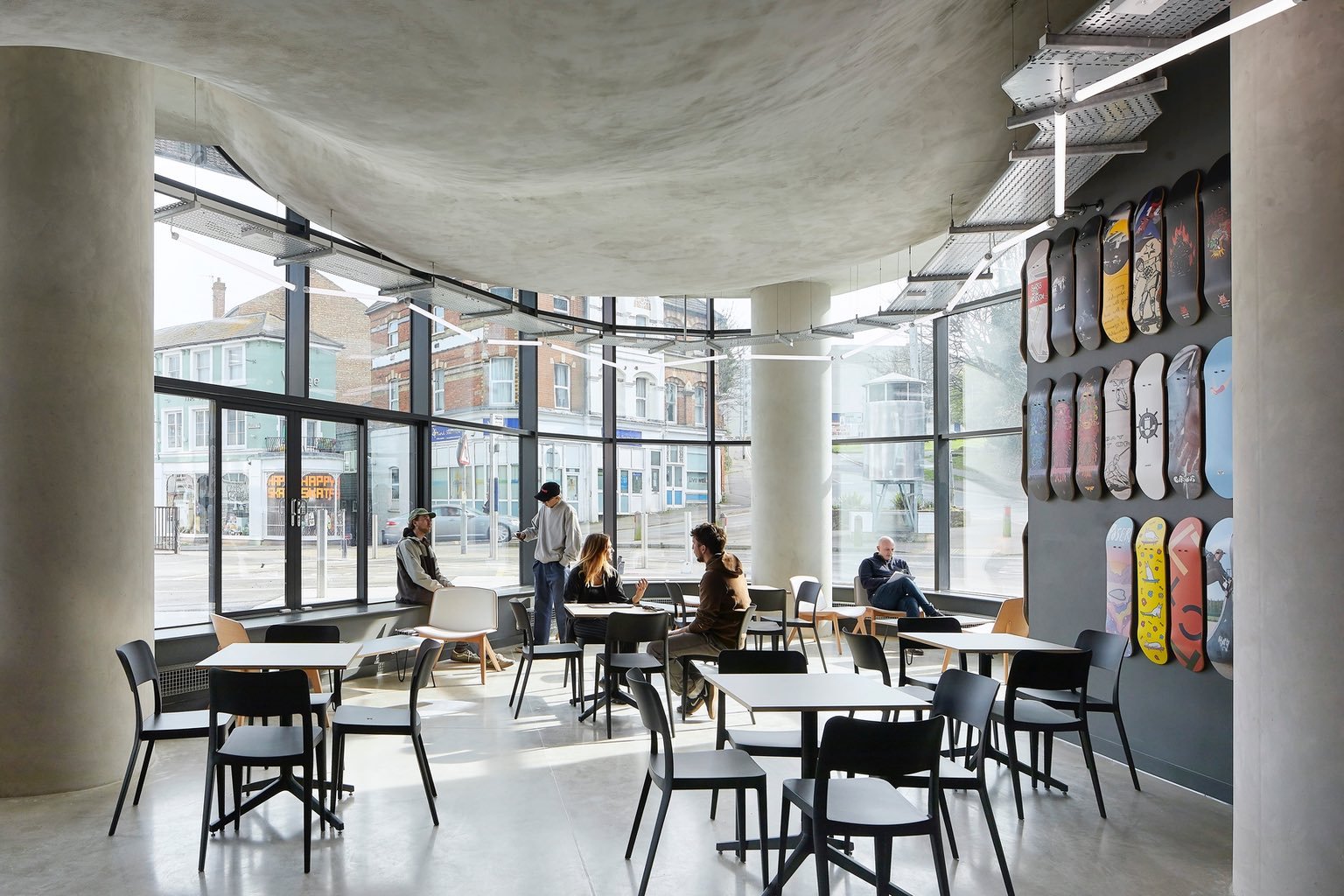 As for boxing, an Olympic-sized competition ring sits alongside several rows of punching bags. A café and community meeting space round out the ground floor, with videography, graffiti, and music workshops dedicated to exploring the cultural overlap between F51’s core sport activities — much like the murals that have been painted throughout the building as a way of engaging the local arts community in the project. 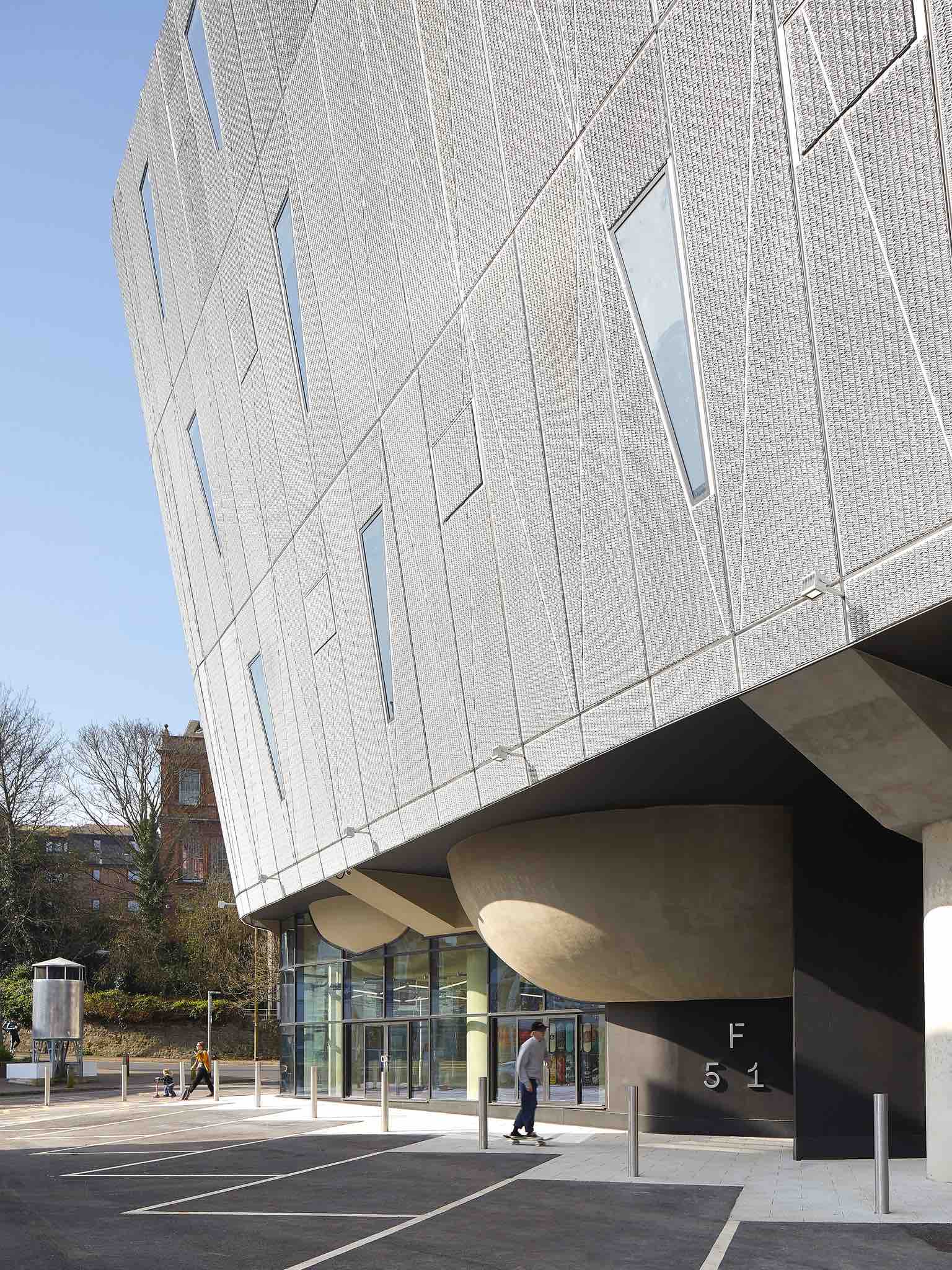 Even for adults who may never set foot inside, F51 makes for an attractive addition to Folkestone thanks to its sculptural facade, which effectively carries some of the excitement of its indoor activity outwards. Concrete bubbles — formed by the deep basins that define the bowl floor — cantilever out above the main entrance, creating a sense of mid-air spectacle while also adding to the geometric visual language established by the facility’s triangular windows and cladding.

“We love the way that they form part of the structure of the building and that the bowls and the building merge together so effortlessly,” says Russ Holbert, director of Maverick Skateparks. “They are challenging and progressive creations of the highest quality — competition standard structures that sit up in the sky.” 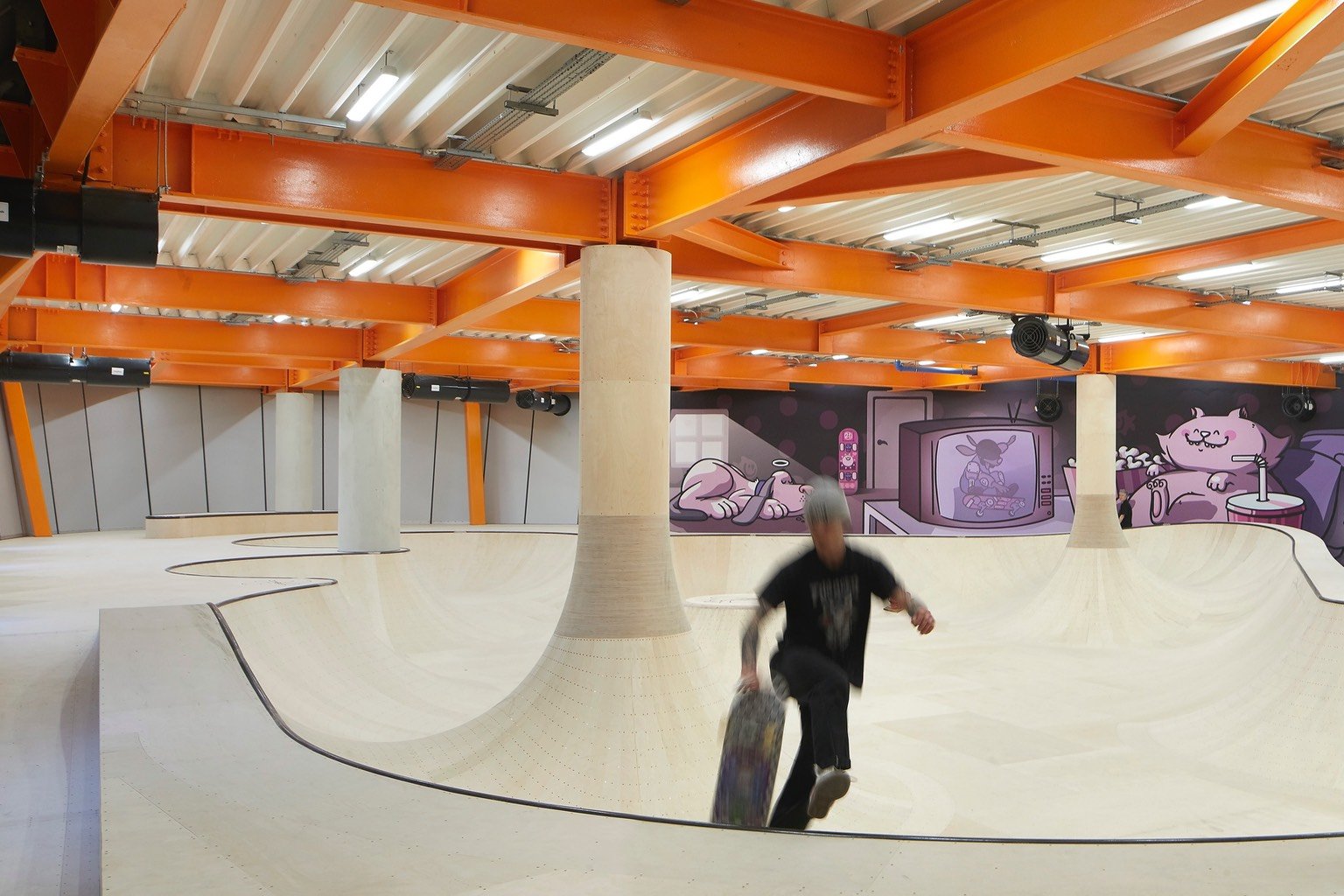 Back in the day, many municipalities’ strategies toward skateboarders were typically limited to antagonistic signage posted near seating and stairs. But as Roger De Haan and Hollaway Studio have recognized, the savvier move is actually to welcome skateboarders with dedicated infrastructure. Because when it comes to building up fresh momentum in a downtown, a facility dedicated to kinetic energy can be a great place to start.

Hollaway Studio swaps out a defunct bingo hall for a high-adrenaline skatepark — and sticks the landing.