Frank Gehry Wows Again with Fondation Louis Vuitton
In Paris, the maestro of curves and weightless forms still surprises, this time with an art museum for Louis Vuitton, the world’s largest luxury brand 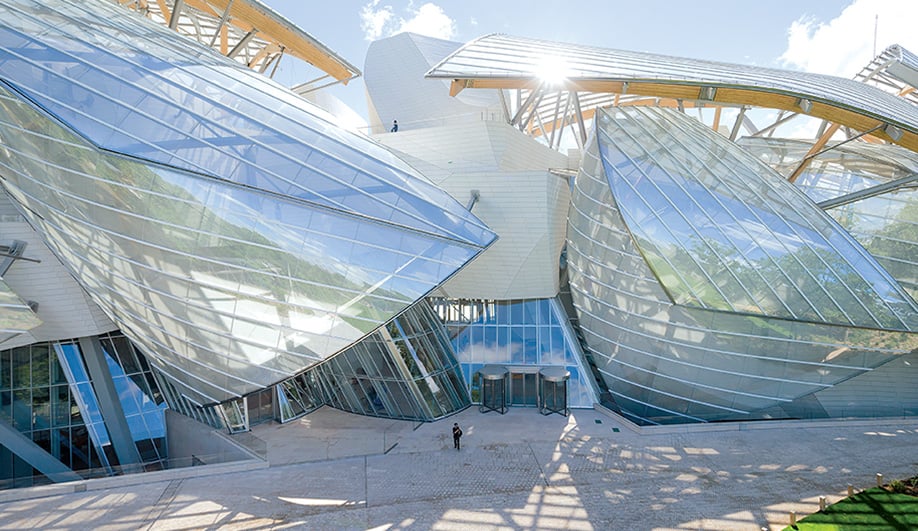 The 3,584 glass panes that make up the sail-like facade are fritted with silkscreened dots to control heat gain. 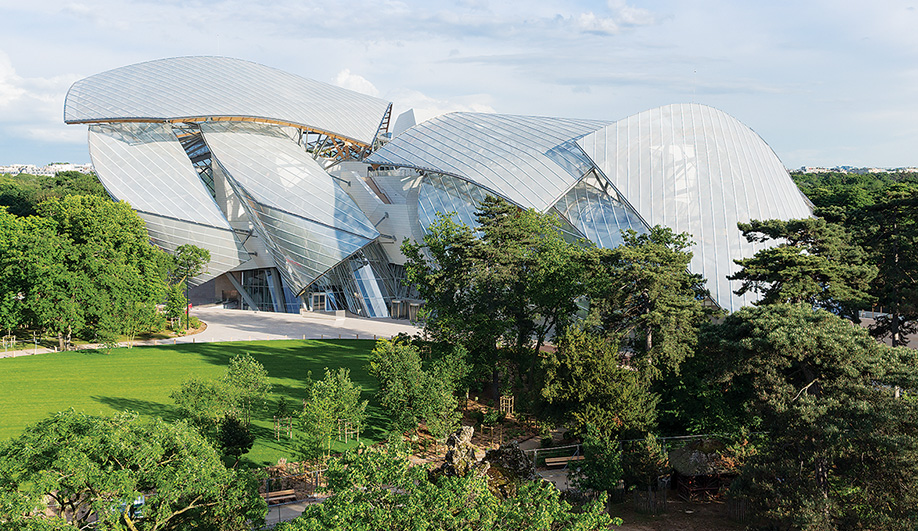 The Fondation dominates its site within the Bois de Boulogne, a wooded park on the outskirts of Paris. 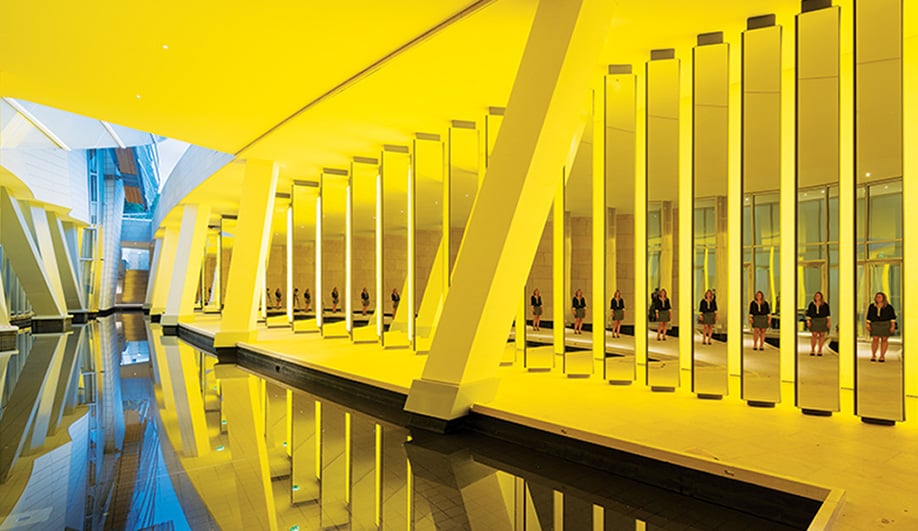 Olafur Eliasson created Inside the Horizon, an installation of light and mirrors, for a site overlooking a reflecting pool in the building’s grotto.

To reach the Fondation Louis Vuitton, you head westward from the heart of Paris to a wooded park and zoo at the edge of the Bois du Boulogne, just barely within the city limits. This seclusion immediately puts Frank Gehry’s grounded vessel at an advantage, since it need not fight with the grandeur of Paris’s renowned urban planning, nor with the charming side streets that would preclude a full-scale view.

Visit the Fondation after dark, though, and the building’s features become discernible in a way that wows even more than by day: the steel geometries through the 13,500 square metres of glass facade, the engineered wood buttresses, the fibre-reinforced concrete blocks. Here you see, essentially, a vessel for outsized ambition and imagination.

Since Louis Vuitton CEO Bernard Arnault first reached out to Gehry, over a decade ago, their combined vision for a cultural gathering place has straddled past and future. Gehry wished to acknowledge the city’s history of glass architecture, from the Grand Palais to the greenhouses of the Jardin d’Acclimatation. Whereas those structures are formal and symmetric, Gehry’s is fluid and sculptural; if you accept the ship metaphor, his 12 enormous glass panels are more like sails than windows.

When Arnault acquired the Dior brand in the early 1980s, the purchase included the listed site of a bowling alley, which the Fondation now occupies. The same zoning regulations that have preserved Paris as the world’s most beautiful playground confined the new building to the size of the original: the 11 galleries, an auditorium, a restaurant and a bookshop adhere to the permitted 11,000 total square metres. The project’s team of over 100 engineers faced an even greater challenge: when Gehry proposed the concept, the technology to create such dramatic shapes had yet to be discovered. The firm attacked the problem using a program adapted by Gehry Technologies from software developed by aircraft manufacturer Dassault.

“The space between the glass and the iceberg is living,” said Gehry of the way his facade swirls around the building core, when addressing an audience before the opening in October. “There’s nothing precious about it.” Perhaps he meant that the wind can make the panels appear as if they have truly been pushed out like sails. Or maybe that the Fondation experience is only complete once you have passed through these limbo passageways to summit the highest terrace. At night, looking farther west, the skyscrapers of La Défense blink like a modern Oz; eastward, the Eiffel Tower rises; and here, equidistant between them, a nexus of light surrounded by a black expanse of forest.

There remains, however, the not-so-minor issue of accessibility within. Navigating these spaces is not intuitive (in fact, it can feel downright dis­orienting), and the only explanation for such an unremarkable entry is that it discourages lingering. Still, the Fondation projects the Louis Vuitton spirit on a monumental scale. Above the outdoor ticket window, an LV logo speaks to the edifice’s status as an object of luxury – conceived by the freedom of an artist, but requiring a brand to serve as patron.

SHARE
Twitter, Facebook, LinkedIn, Pinterest, Email
TAGS
Art, Cultural, Fashion,
AZURE is an independent magazine working to bring you the best in design, architecture and interiors. We rely on advertising revenue to support the creative content on our site. Please consider whitelisting our site in your settings, or pausing your adblocker while stopping by.