We are in Dark Mode in May. Find out why
Frank Lloyd Wright in Florida
Call it American architecture's best-kept secret. Few realize that the world's largest collection of Frank Lloyd Wright buildings lie nestled together on a college campus in South Florida. In recent years, the leadership of Florida Southern College has painstakingly raised awareness and funds in an effort to restore their treasure trove of Wright structures to their former glory. The latest such building: a Theater-in-the-Round — Wright's only such design — is currently on track for completion this June. And for those who can't make it to Florida to check out the campus in situ, a new exhibit of Robin Hill's photographs (such as the Water Dome shot shown above) at the Charles Cowles Gallery in New York City opens May 19th. 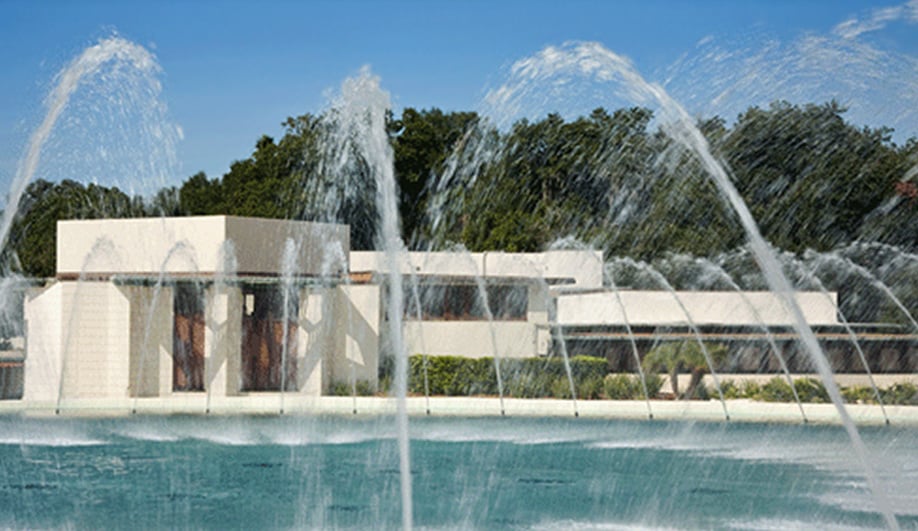 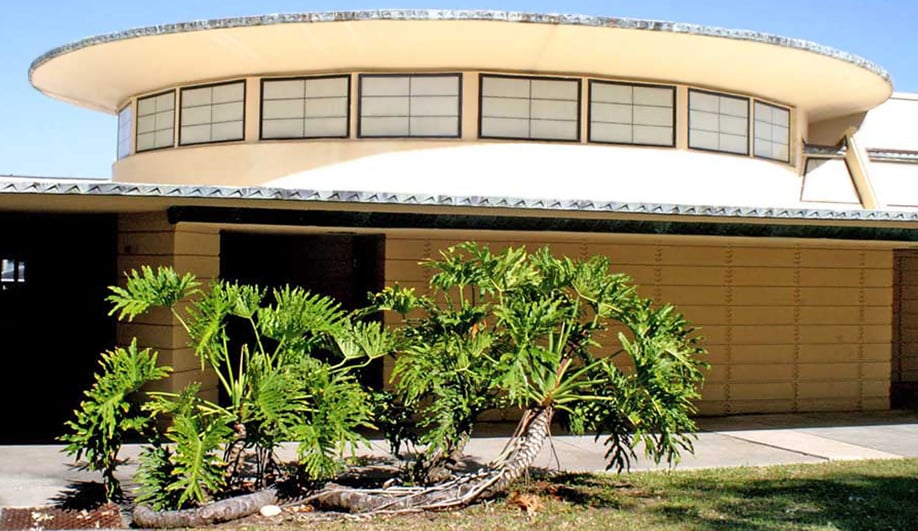 The Theater in the Round – image courtesy Florida Southern College

“Desire Conference with you concerning plans for Great Education Temple in Florida Stop. Wire contract when and where I can see you.“- Western Union telegram to Frank Lloyd Wright at Spring Green, Wisc. April 1 1938, from Dr. Ludd Spivey, Bradenton, FLA.

“Can you come to Taliesin, Spring Green, Wisconsin for Conference. Arriving there April 20.” Wright‘s response.

Two telegrams. Two men. One quixotic idea. No money. That’s how the largest single-site collection of Frank Lloyd Wright architecture in the world first got started.

According to college lore, it was a trip to Europe by then-college president Dr. Ludd Spivey and the viewing of a war memorial that inspired Spivey’s Great Idea. He returned to the U.S. with a vision of constructing a modern American campus amid South Florida’s orange groves. And he’d decided there was only one man for the job: Frank Lloyd Wright.

When Dr. Spivey flew to Taliesin at Spring Green, college lore has it that he actually had no budget to build the project. “But if you’ll design the buildings,” Spivey is reputed to have said, “I’ll work night and day to raise the means.”

Wright was 67 years of age upon his first visit to Lakeland. As he toured the orange groves, he talked of envisioning the buildings rising “out of the ground, into the light and into the sun.” His master plan called for 18 buildings using the following basic materials: steel for strength; sand because it was native to Florida; and glass “to bring God’s outdoors into man’s indoors.”

The college’s conception and construction would ultimately span almost twenty years, from that first contact in 1938 to the 12th building’s completion in 1958. Among these are a spectacular, 45-foot-high Water Dome, the only Wright planetarium, and the aforementioned Theatre-in-the-Round.

According to Florida Southern College representative Lee Mayhall, the technology to power Wright’s vision for the Water Dome — a fountain of graceful waterjet arcs arrayed in a circular formation — did not exist at Wright’s time. Now, however, it does exist, so the Water Dome has been brought to life as FLW envisioned — more than fifty years later.

Though variously in use throughout its history, the college’s buildings went through a slow decline after its completion in 1958. As per Wright’s desire to build as locally as possible, much of the college was constructed of textile blocks, a form of concrete that used local materials in its mix. Unfortunately, these blocks have a tendency to deteriorate and leak. (At one point, college lore has it, a rainstorm spurred a waterfall onto college president Dr. Spivey’s desk. Spivey complained to his architect. Wright’s reported response? “Move your desk.”)

In June 2007, the World Monuments Fund placed the Frank Lloyd Wright campus, which Wright had named Child of the Sun, on its Watch List of 100 Most Endangered Sites in the World. This international designation is based on the significance of the site, the threat to the site, and the viability of the plan to restore the site. This designation has helped the college leadership win a series of grants that have helped restore several structures.

Two structures have now been fully restored. The first of these the Water Dome.

The Dome was completed in 1948. But given the technological constraints of the time, it never actually functioned. After a new campus library adjacent to the pool was built in 1968, a major portion of the pool was covered in concrete.

In 2006, the State of Florida Division of Historical Resources and private donors provided the funding to fully restore the Water Dome to Wright’s original vision. The premiere of the Water Dome was held October 25, 2007.

The State of Florida also funded a $1.6-million restoration of Wright’s Esplanades, or covered walkways connecting his 10 structures on the campus. That restoration was completed in November 2007. Restoration work on the Theater-in-the-Round is scheduled for completion this June.

As the restoration work continues, the college is in constant use. In fact, this coming Thursday, April 30, architects from across the United States, including Eric Lloyd Wright, FLW’s grandson, will gather at the college for a Textile Block Symposium, organized through the World Monuments Fund.

This symposium will focus on the past and present issues with restoring and replicating Frank Lloyd Wright’s signature “textile blocks”. As described, because every Wright-designed building on the campus is constructed of these blocks, the college has a real stake in this issue.

The purpose of this symposium is to assemble those responsible for the work on these (and other) sites to share best practices. The college will use this information to help determine the strategy for further restoration work.

In the meantime, however, the college, and its recently restored Wright structures, is most definitely open to the public. So if your summer travel plans include Florida, it might be worth dropping in on America’s best-kept architecture secret. For more information, including hours and walking tour details, check out the Florida Southern College website here.

For those who cannot make it down to Florida, there’s an opportunity to check out the campus in New York City, courtesy the gorgeous photography of Florida photographer Robin Hill. A new exhibit, titled ‘Child of the Sun’ Frank Lloyd Wright’s Florida Southern College, will be on show at the Charles Cowles Gallery on 537 West 24th Street in Chelsea, from May 19th to May 23rd. Featuring 18 large scale photos by Hill, the show aims to highlight the need to preserve and renovate Frank Lloyd Wright’s largest single repository of buildings in one location.