Fuzhou’s Massive Cultural Centre is Inspired by a Tiny Flower
In Fuzhou, China, PES-Architects has erected the sprawling Fuzhou Strait Culture and Art Centre, a five-building hub that resembles a jasmine blossom. 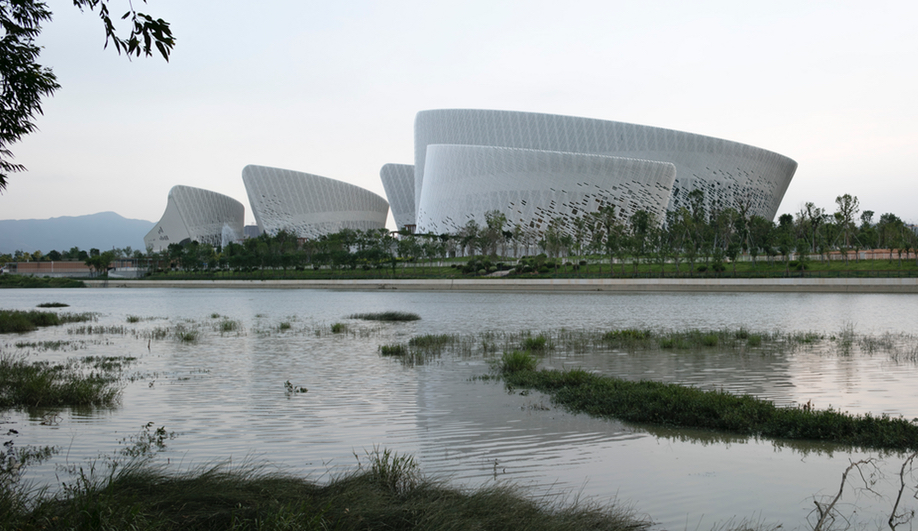 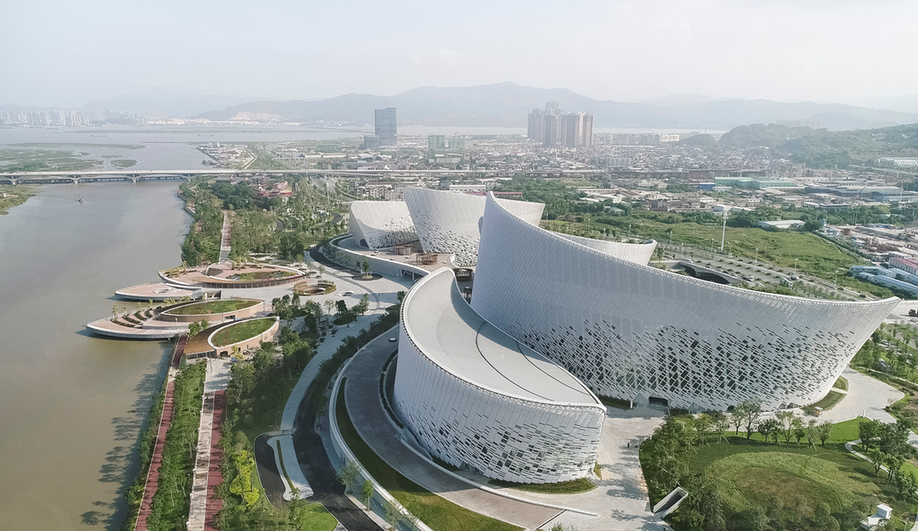 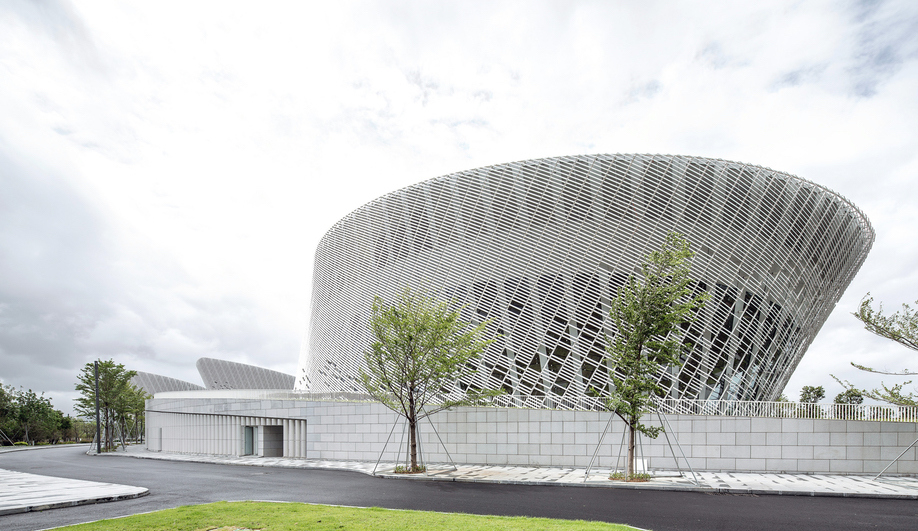 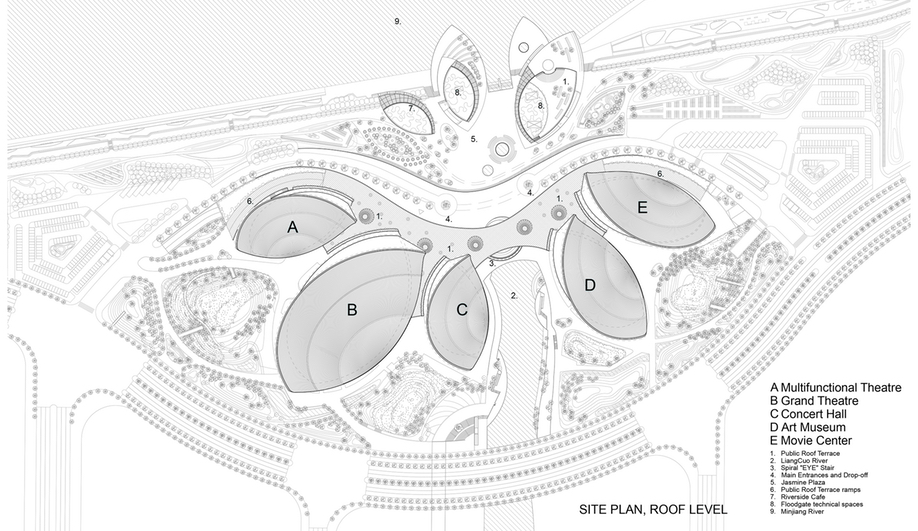 Situated on the bank of the Minjiang River in one of the largest cities in China’s Fujian province, the new Fuzhou Strait Culture and Art Centre by PES-Architects takes influence from the city’s flower – the jasmine.

Tiny and delicate, the jasmine flower seems an unlikely inspiration for a sprawling cultural and arts centre. For PES-Architects, which has offices in Helsinki and Shanghai, the blossom felt like a natural jumping-off point for its design of the new Fuzhou Strait Culture and Art Centre. Jasmine is the city flower of Fuzhou, and the arrangement of petals is referenced in the layout of the centre, which is spread across five separate buildings linked by a common concourse and public elevated terrace. Each complex houses a different venue – an opera house, a concert hall, a multi-purpose theatre, an exhibition space for artworks and a cinema centre – and each is defined by its own separate yet complementary characteristics supported by a curated palette of ceramic, bamboo, marble, concrete and steel throughout.

On the outside, the swooping buildings are clad in the same flower-white ceramic tiles and louvers, lending them an immediate visual cohesion despite their varying sizes. To mitigate direct solar gain, PES-Architects developed a computer script to establish the angle the fixed 1.8-metre-long louvers – and the distance between each – needed to be installed in order to optimize shading. “This passive ecological strategy lowers the cooling load of the building significantly,” says project architect Martin Lukasczyk. “Where shading was not needed, façade louvers were taken away in a random pattern to open the views from [inside].” The mix of tiles and louvers and their digitally determined application impart a dynamic cyclonic movement to the buildings, all of which are topped with pre-patinated zinc roofs.

Moving inside, the main concourse lobby is an all-white space composed of fibreglass-reinforced concrete and marble. Massive “mushroom columns” contain elevators and ventilation equipment, and “sky blossom” windows in the suspended ceiling let daylight infiltrate the space. Here, the jasmine is represented in the patterned ceiling, a composition of fragmented circles – the one geometrical base form used throughout the centre, according to Lukascyk. Acoustic panels insulate the cutouts to absorb sound; they also serve as air return and exhaust openings.

From the entrance, one moves through curved galleries to enter the five venues. These spaces, which can be used for public exhibitions and other activities, feature interior walls lined with bamboo, the warm wood offering a contrast to the crisp white elements and glazing, and also a hint at the materials that will be found further along inside.

The Multifunctional Theatre, designed for a 700-seat audience, is wrapped in CNC-cut bamboo blocks that have been shaped to support acoustic needs, the undulating effect simultaneously reflecting and diffusing sound. “In addition, the pattern crates a ‘kick-down’ effect, enhancing lateral sound reflections to the audience,” notes Lukasyck. The cable net ceiling allows for flexibility of lighting and other technical equipment.

Perhaps the most dramatic of the interior spaces, the Opera Hall is defined by curvaceous profiles and intricate detailing. Here, “each wall angle and surface curvature was generated with the help of acoustical ray-trace scripting tools to achieve the best possible sound,” says Lukascyk.

Nearly 1.5 million custom-developed ceramic tiles line these double-curved walls, boosting both the acoustic integrity and the aesthetics. The elaborately detailed jasmine flower pattern was achieved using 13 different CNC-cut high-precision metal moulds and rendered in a combination of three shades of warm grey, working with the room’s bamboo elements to further soften the inviting space. Suspended from the ceiling is a massive acrylic LED reflector that is back-lit and dimmable, its wave-like formation an appropriate addition in the hall, which seats an audience of 1,600.

The 1,000-seat Concert Hall also incorporates custom-developed ceramic tiles, these ones gleaming white and a mix of flat and protruding. Approximately 2,500 tiles were designed for this room – PES-Architects worked with Taiwanese ceramics artist Samuel Hsuan-yu Shih for all the tiles both in here and in the Opera Hall – and were once again formulated to meet acoustical demands.

The central orchestral stage is surrounded by two levels of convexly curved and inclined walls, the curvature and angle of each calculated with an intended acoustic result: flat ceramic tiles actively reflect sound waves, protruding ones diffuse them. Differently sized “Light Clouds” hang from the ceiling (31 smaller pendants two-metres in diameter and five large reflectors roughly five-metres in diameter) and can be raised and lowered to meet the changing needs of performers.

PES-Architects were awarded the commission after an international competition was held in 2013. The intention was to strengthen the city’s cultural image and, with its thoughtful design, the Fuzhou Strait Culture and Art Centre confidently fits the bill.