In the Gulf Islands, A Residence That Elevates Everyday Life
Tony Robins lifts, lowers and stretches an oceanside house to form the perfect setting for indulging in the great outdoors.

Left: Communal and private spaces abound in the five-­bedroom home’s multi-­dimensional layout. Right: In its final construction (not shown), a fibreglass slide clad in reflect­ive steel flows from the upstairs hallway down into the infinity pool.

It’s true that most buildings respond to their sites. However, spectacular natural settings inevitably inspire site-responsive designs – acquiescent devices for appreciating nature. Buildings within the urban fabric, by contrast, tend to celebrate the artificial. This schism is hardly absolute, but its dominance pretty much holds true in such awe-inspiring locations as the Gulf Islands, where cliffside coastlines, dense forests and a moderate climate define the terrain. 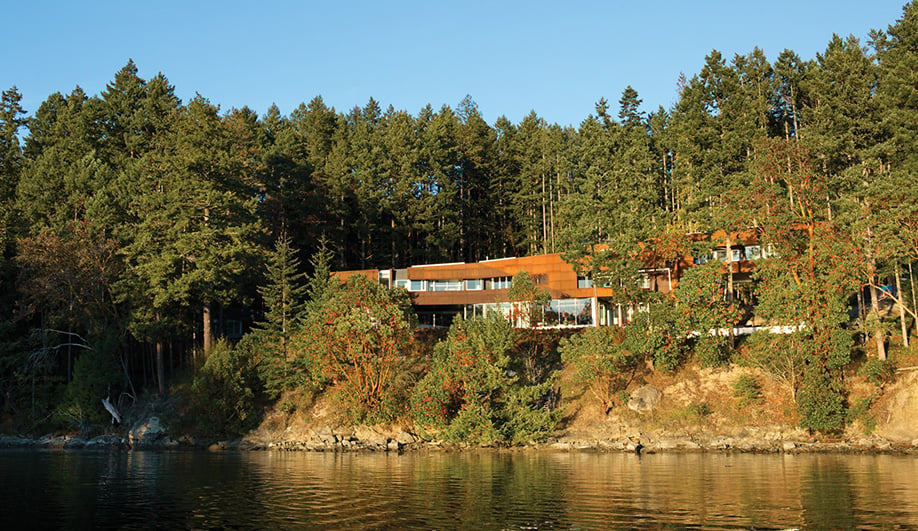 Copper-hued steel cladding on the ocean side mimics the natural surroundings.

A recent project by Tony Robins, principal at AA Robins Architect of Vancouver, occupies one such remarkable plot, nestled in a sheltered bay and surrounded by towering firs and flowering arbutus. The archipelago context is irresistible, but what makes the house a compelling piece of architecture is how it responds to the setting while investing in its own recreational territory. Except for a compact configuration on the ground level – comprising the entrance, the kitchen, and the dining and living areas – the majority of the home’s 604 square metres is contained within a large, rectangular volume that stretches 57.3 metres in length, raised between 2.7 and six metres by variously shaped columns and piers. 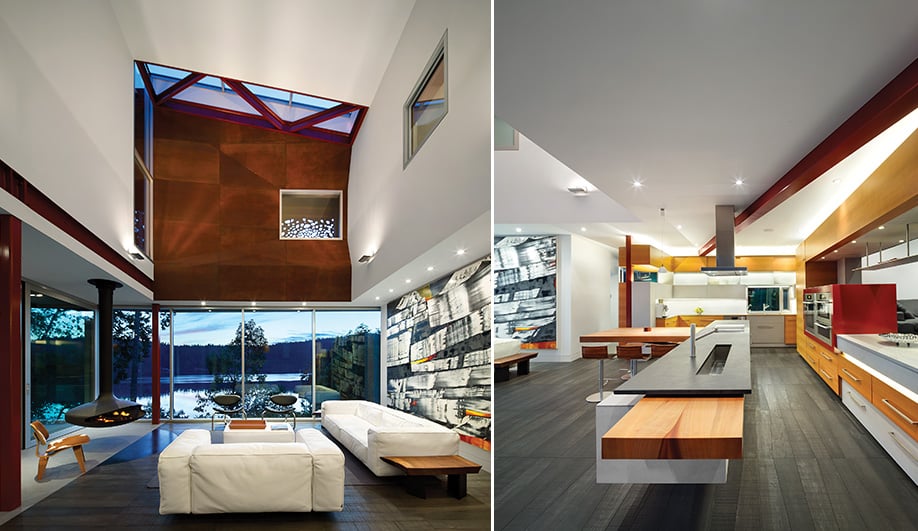 Left: Metal panels define a feature wall in the living area. The exterior cladding, perforated in some places, can be seen through a window, appearing as a dappled light pattern. Hanging fireplace by Focus, soft furnishings by Edra. Right: Salvaged arbutus wood from blow-downs is used in the kitchen, where various materials and colours intersect.

The elevated split-level mass contains five bedrooms, a game room and an office. According to Robins, who has been building private residences of a similar scale along British Columbia’s west coast for over three decades, the house was lifted off the ground to preserve views of the ocean. This heroic move has the added benefit of creating a sheltered outdoor living space. In combination with the centrifugal layout of the ground floor, the covered area orients the house away from just being focused on the shoreline. Within its inviting terraces, set up for endless days of barbecuing, lounging and soaking in the pool, a delightful area unfolds, geared entirely toward leisure. A steel-covered slide even descends from the cantilevered volume and takes a 180 degree turn before flowing into the pool. There is the view, of course, but there is also the commingling of human activity surrounded by nature. 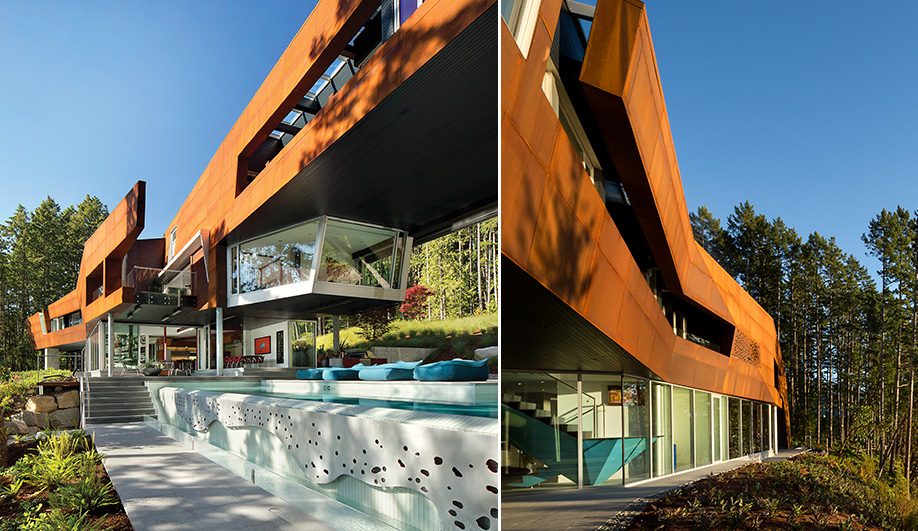 The house was built in modules at Robins’ preform factory, then shipped by barge and assembled on site.

Another element that celebrates the dwelling’s active character is found in the upper-floor master bedroom, where a dropped space is nestled under the soffit and clad in floor-to-ceiling glass. Called the Zeppelin Pod, the curious room commands views of the pools below.

Robins’ agility at introducing elements that are simultaneously native and foreign extends to the exterior. The folded surfacing that defines the ocean side of the house is composed of rusted steel engineered to match the bark of nearby arbutus trees. Through occasional perforations, sunlight streams through to the interior and strikes the walls in pleasing dapples.

Left: The master suite’s deck faces onto the Pacific Ocean. Each bedroon has its own private staircase and a deck. Right: A platform bed designed by Robins sits atop thermally treated white oak flooring by Listone Giordano.

The sculptural metal, however, is largely hidden from most angles, the best vantage point of it being from the ocean. On the land side, with its tennis and bocce courts and a micro-museum for the client’s vintage car collection, the cladding combines subdued corrugated metal and cedar siding. The steel does reappear in several rooms, with an inspired moment happening in the master bedroom, where it bifurcates to frame a deck. Here, the surface becomes tantalizingly spatial. 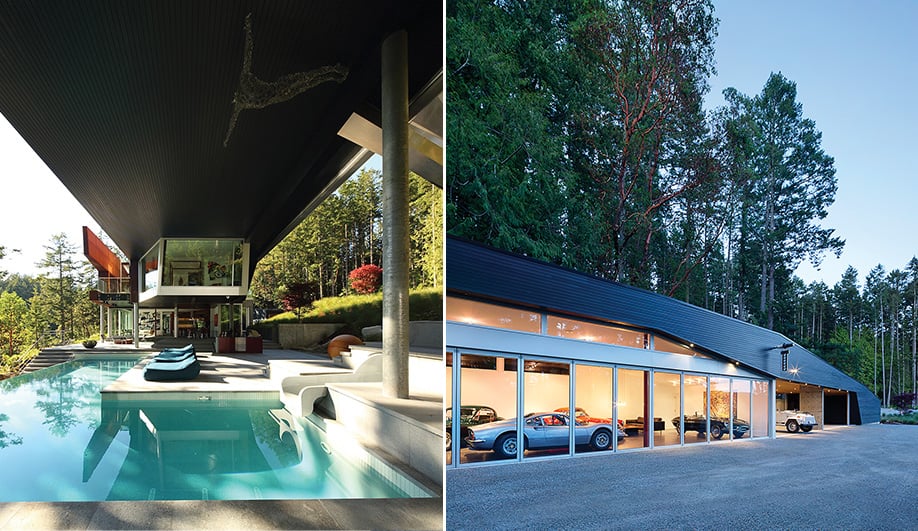 The success of the Gulf Island Residence lies in how it erases the line between natural and artificial, suggesting that the richest possible experience resides not with one or the other, but in the in-between. ­