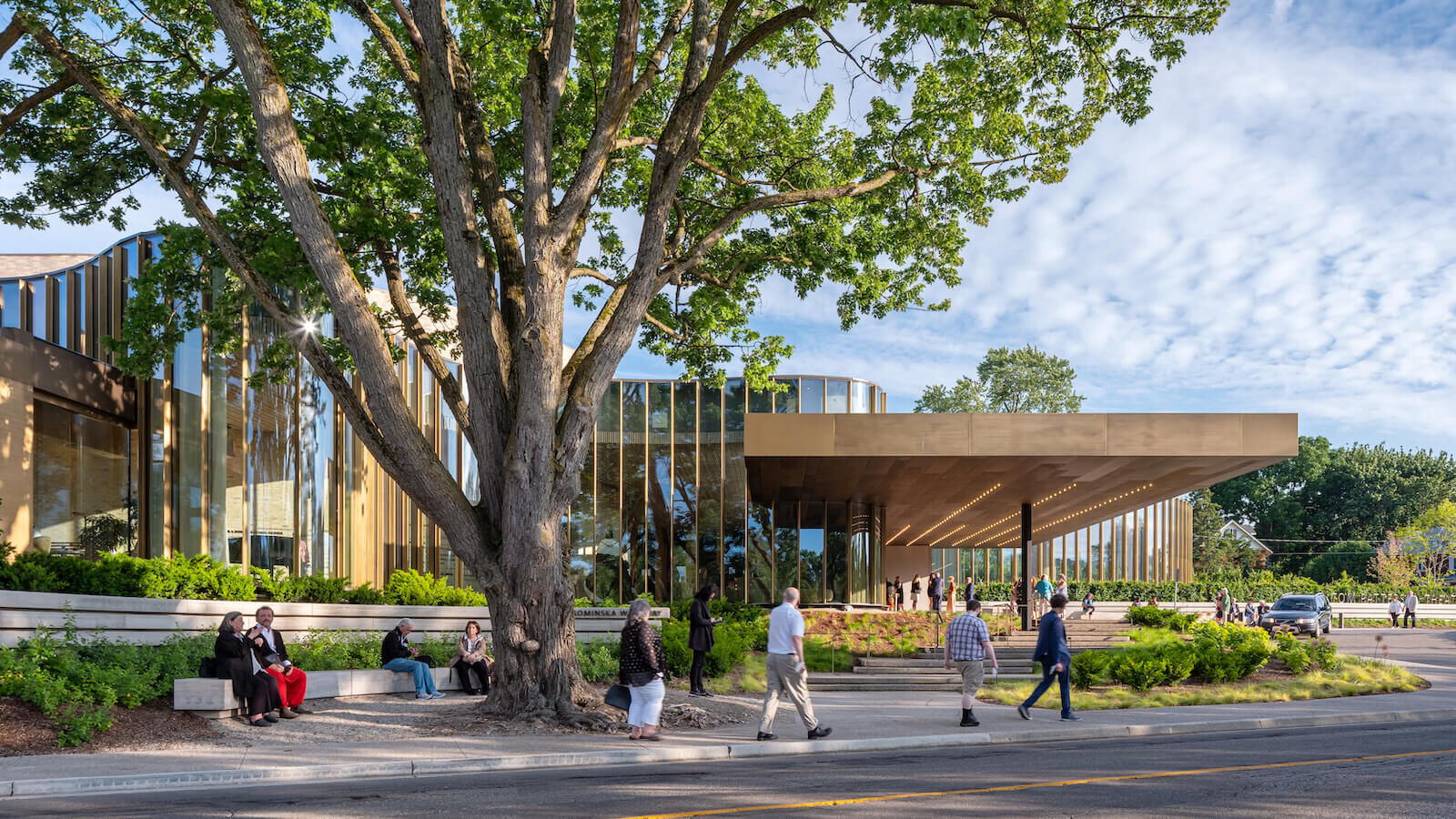 An Ontario Theatre Harnesses the Magic of the Stage

Drinks before curtain call. Ice cream at intermission. Chance encounters with old friends by the bar. Small talk. A breath of fresh air between acts. The sense of quiet anticipation while queuing for the doors. We come for the show, but the little things leave just as vivid a mark. Away from the stage, such moments shape and colour the experience of going to the theatre, transforming an evening into a night out.

“It’s all about spectacle and magic,” says Siamak Hariri. “It has to be a memory in the making.” For the architect, one of the founding partners of Toronto’s Hariri Pontarini Architects, this experiential philosophy guided the design of a performing arts venue unlike any other in Canada: At the new Tom Patterson Theatre, the small rituals of a night (or day) at the theatre are embraced with an almost spiritual reverence. 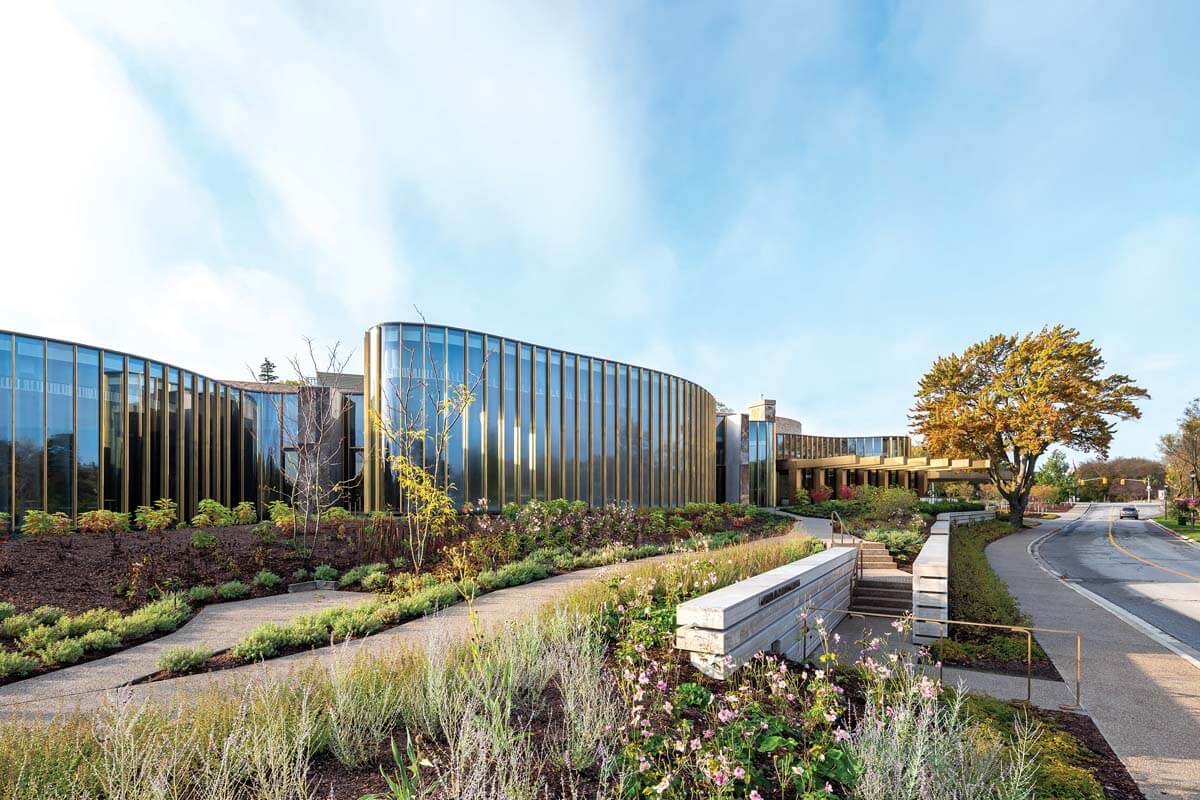 The 7,150-square-metre showpiece in the picturesque Ontario city of Stratford appears as a beacon on a hill. Clad in brick, its central drum-shaped auditorium is framed by limestone pillars and an undulating series of light-filled rooms that stretch across the manicured landscape like the folds and eddies of the adjacent Avon River. With its elegant bronze mullions, this sinuous glass facade asserts an unmistakable presence from afar. A meadow garden of tall grasses and hardy, drought-resistant local species (designed by Holbrook & Associates with The Planning Partnership) surrounds the theatre, while a row of graceful cherry trees announces the main entrance and the generous plaza that meets the tall front doors. 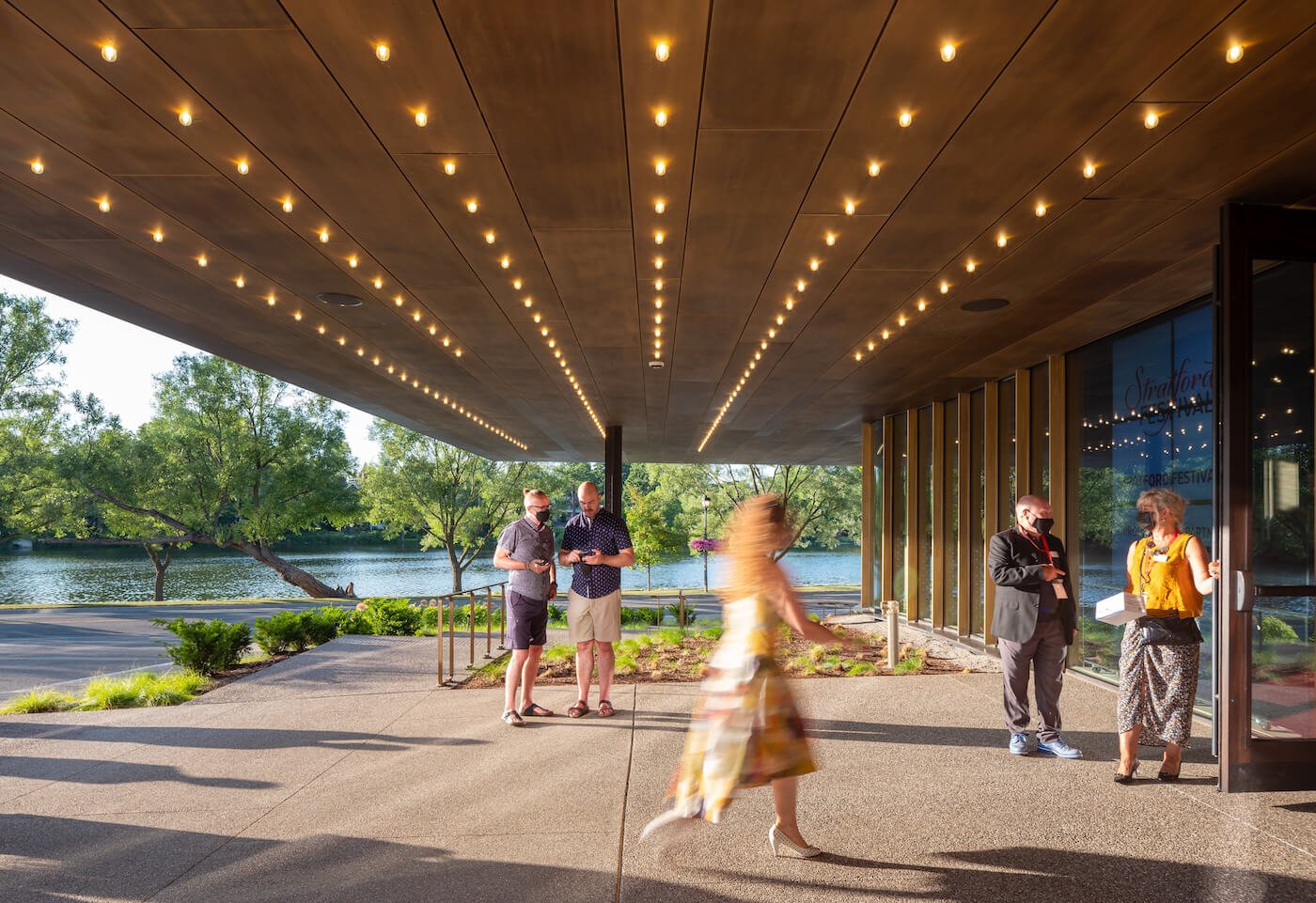 The building establishes a new hub for the Stratford Festival of Canada, an annual showcase inaugurated in 1953 now globally recognized for its productions of Shakespearean plays. Named for the festival’s founder, the $72 million complex, which replaces a cramped older theatre built on a repurposed curling rink, is already a landmark venue — an instant architectural icon. 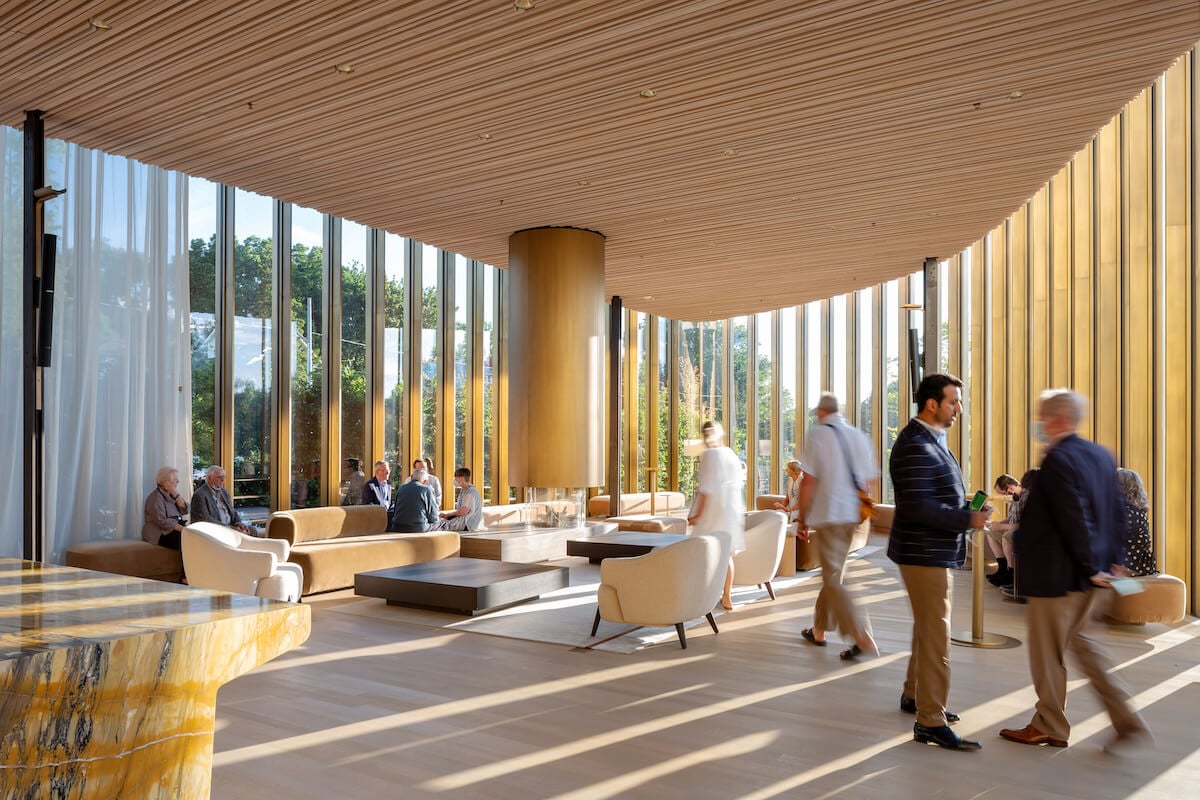 A majestic cylindrical fireplace descends from the ceiling in one of the lounges that form the Tom Patterson Theatre’s social spaces. PHOTO: Scott Norsworthy

Inside, the facade’s folds and eddies translate into a procession of flexible social spaces that flow out from either side of the luxurious lobby to face the river. These include a workshop space, a fireside lounge and a skylit café with an intimate terrace; each offers a distinct ambiance within a unified whole, their fluid configuration inviting a leisurely stroll from one space to the next. Hariri Pontarini custom-designed many of the plush furnishings and finishes, including a trio of bars in three distinct types of marble — a sumptuous detail that doubles as an intuitive wayfinding gesture. “I thought it would be fun for people to say, ‘I’ll just see you at the red bar, the green bar or the gold bar’,” says Hariri. 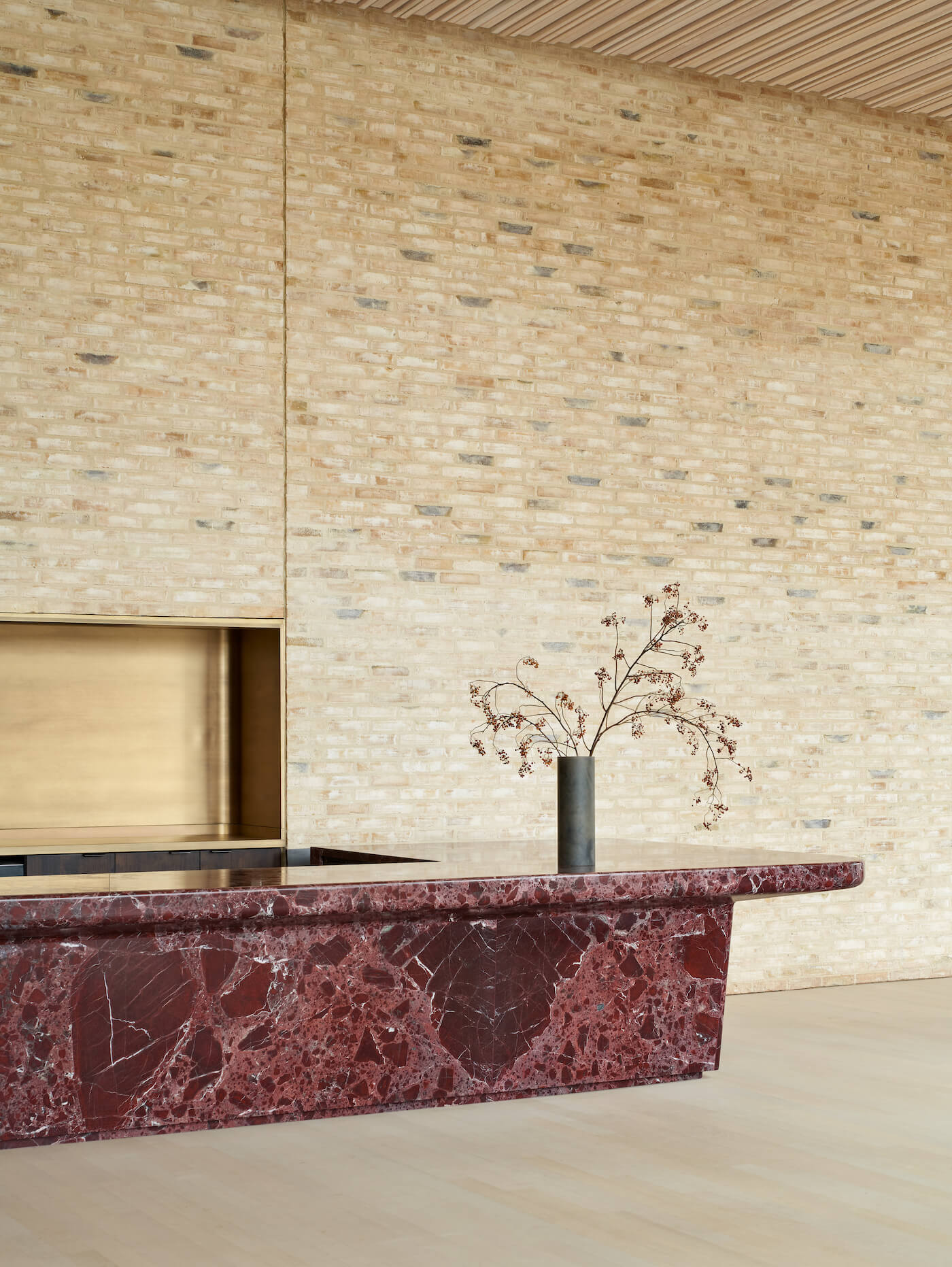 Like the gold bar in the lounge above, the red bar outside Lazaridis Hall provides an elegant spot to gather and a dramatic wayfinding device. PHOTO: Doublespace

Another of the social spaces (and the largest of these outer rooms), Lazaridis Hall is capable of expanding to accommodate up to 250 patrons for cabaret-style performances, lectures and screenings: A removable wooden stage — a Proustian moment of salvaged wood from the site’s former Tom Patterson Theatre — slides into the hall, blackout curtains descend and 4.9-metre-tall walnut doors close to acoustically seal the chamber off from the lobby. 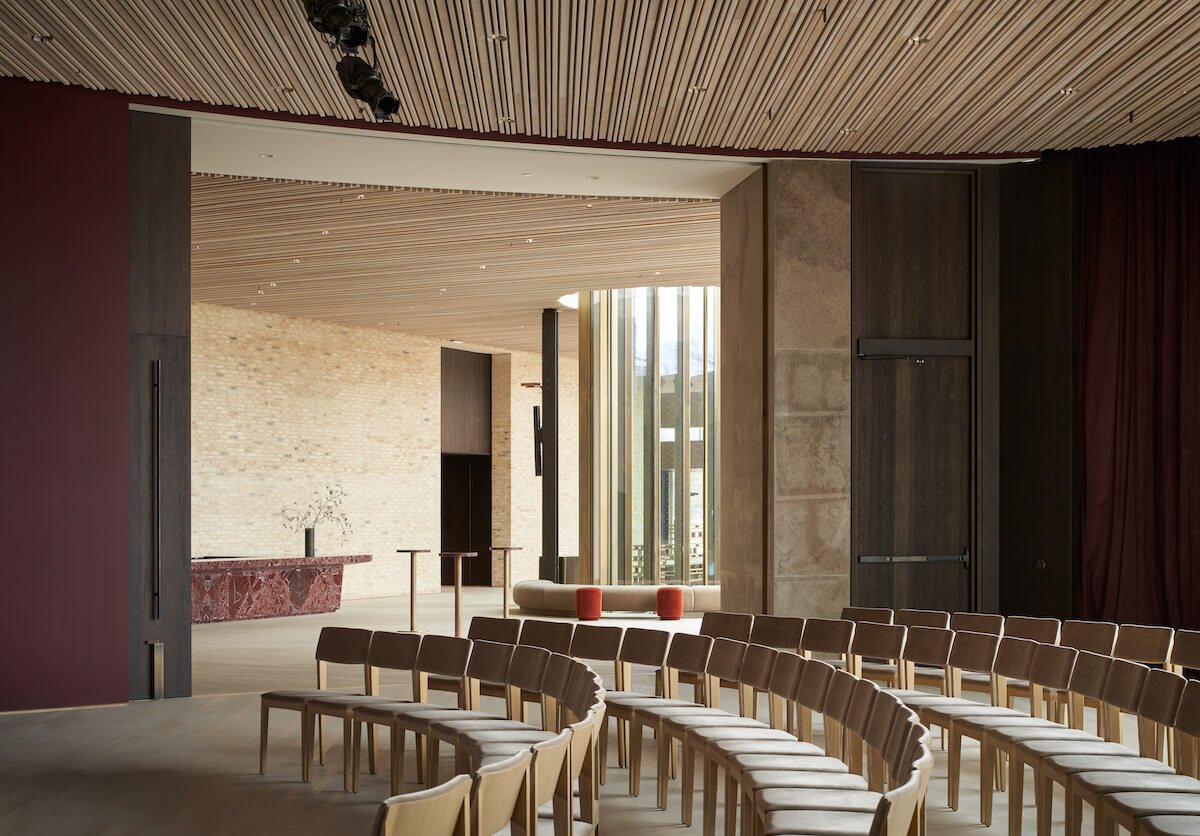 Depending on the program, sliding glass doors open to seamlessly connect Lazaridis Hall to the rest of the interior or close to create an acoustically separated performance space. PHOTO: Doublespace

In shaping these various “stages” of performance, whether intimate or collective, Hariri Pontarini was inspired as much by the riverside setting as by the art of set design. While the building’s curves foster a dialogue with the Avon’s currents, the topographic sequence of social spaces are informed by the layered mise-en-scène of legendary 20th-century Swiss designer Adolphe Appia. “Appia is all about levels, and all of our spaces are on different levels,” Hariri notes. “It all becomes an Appia stage. Facing the river, the whole theatre performs this gigantic outward reversal.” In this way, visitors become part of the spectacle. “And then you think, ‘Damn, you can’t get this watching Netflix’.” 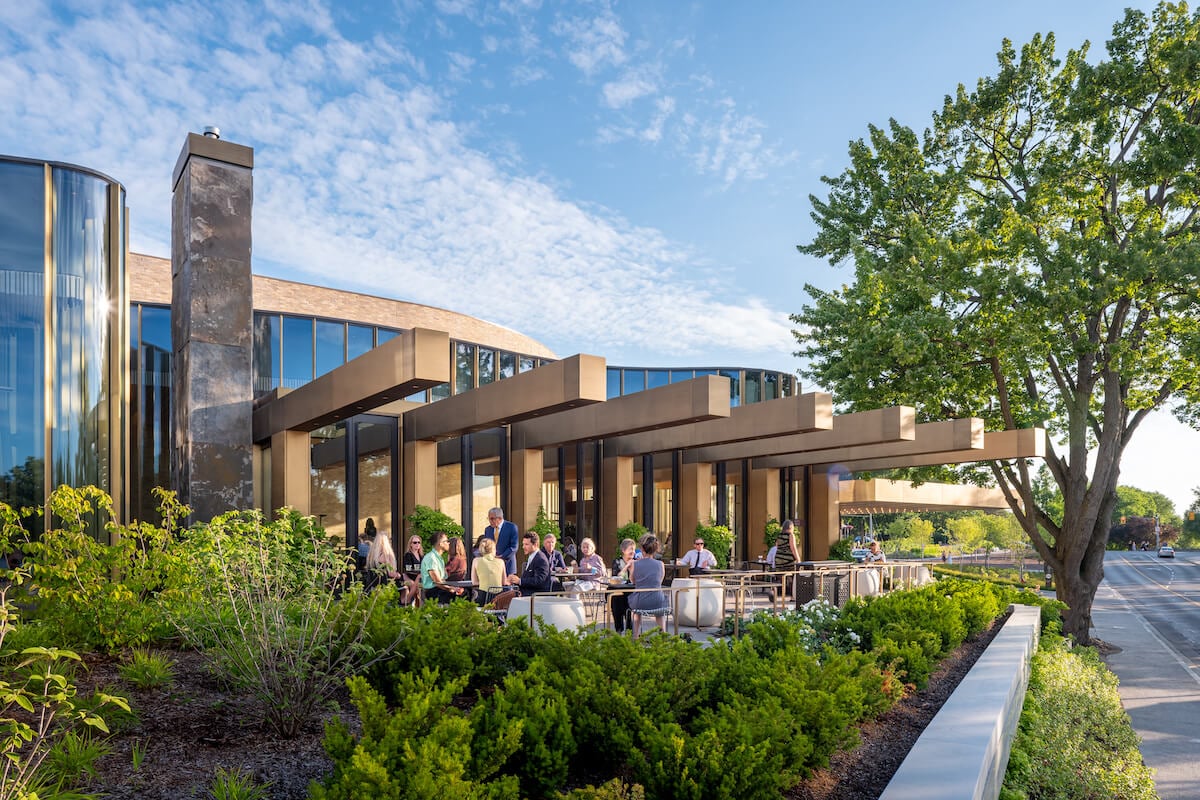 A deft interplay of textures and patterns further elevates the interiors. Sweeping walls clad in slightly irregular Danish brick — complemented by matching mortar for a unified aesthetic — and accent walls in Algonquin limestone are set against blond oak floors. Bathing these neutral surfaces in sunlight, the double-glazed facade is a precise combination of curved and straight panels that soar to 6.1 metres and vary in thickness; the subtle rhythm that results is emblematic of a well-considered design. (Complementing Hariri Pontarini’s refined palette, builders EllisDon have achieved a level of precision seldom seen in North American construction.) From within, the building and its landscaping seem to meld with the bucolic horizon. 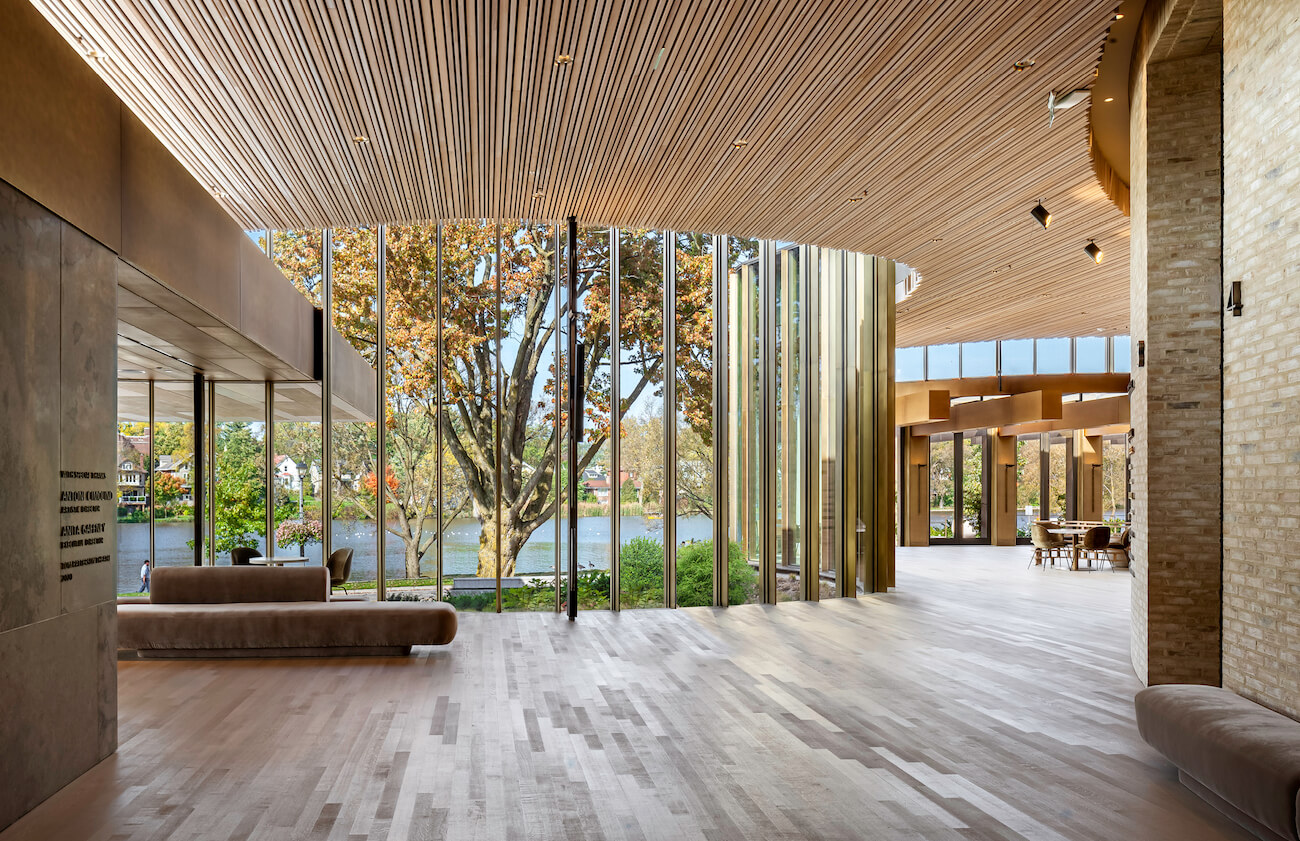 The whole of the structure was contoured around a grand maple tree, which remains a heroic focal point of the new landscape. PHOTO: Scott Norsworthy

But the tranquil ambiance was a hard-won feat: To create a clearer connection with the natural surroundings, the landscape was elevated more than two metres above a busy local road, effectively erasing the cars and asphalt from view to create an open vista. The whole of the structure is also contoured around a majestic ancient maple tree; its endurance reinforces the building’s organic presence. This, too, is the romance of Hariri Pontarini’s layered stage. 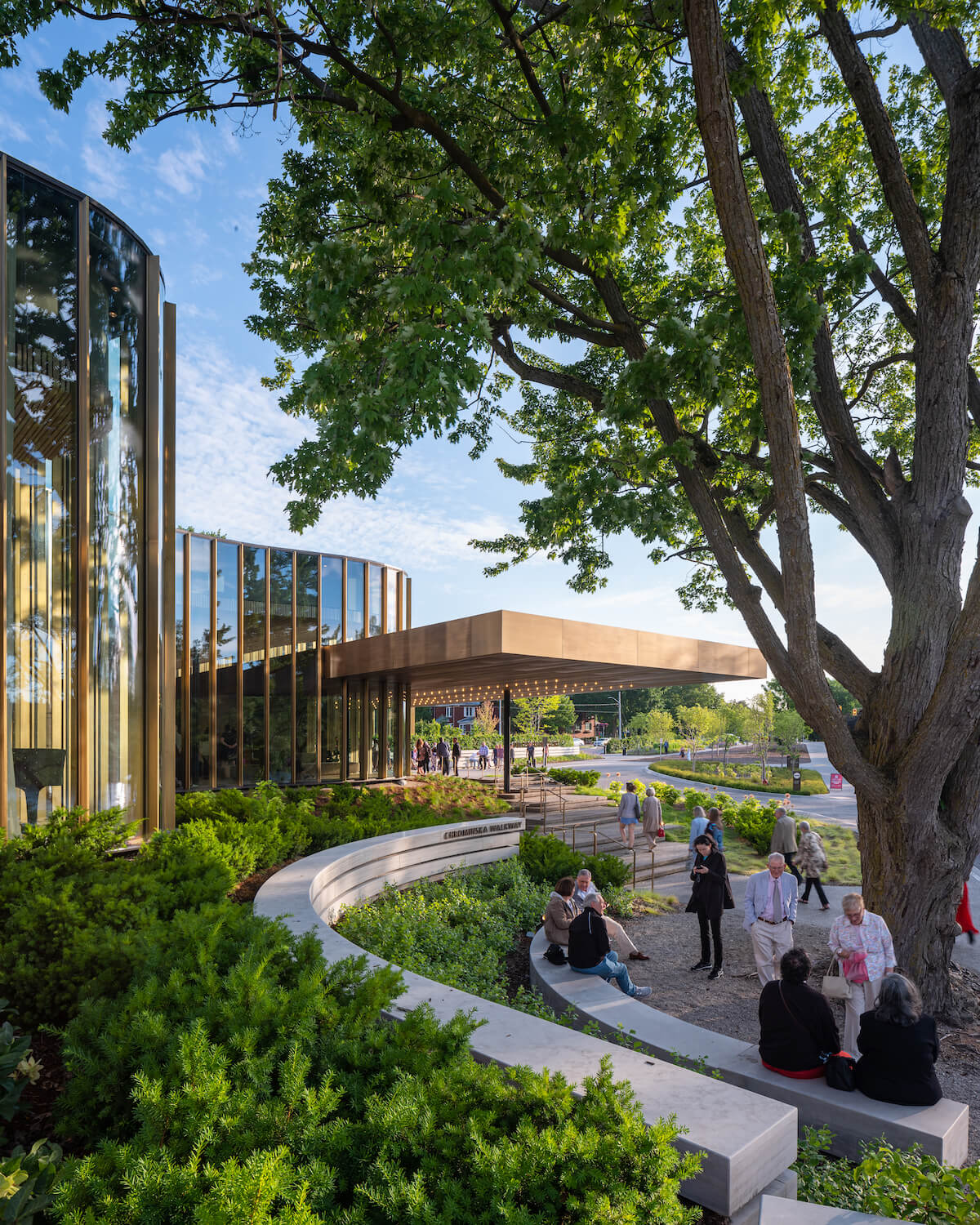 At the heart of it all? The auditorium. The venue’s raison d’être is composed of an elongated, immersive thrust stage — a Stratford trademark and one of only a handful of such designs in Canada — which is surrounded on three sides by 600 custom-crafted seats upholstered in a plush burnt orange, none more than 8.5 metres from the podium. Another nod to Appia, the Tom Patterson Theatres’ auditorium actually sits slightly below the elevated landscape, and patrons enter from above; it’s a surprising descent, and another layered stage that amplifies the feeling of a theatrical world about to be conjured. The details, again, bring it home: Canadian walnut panels frame the room, curving into the ceiling and seemingly disappearing above the lights and catwalks.

And the acoustics are immaculate. While double-glazed insulated glass, a robust multi-layer wall between the lobby and the theatre (including a thick concrete buffer) and whisper-quiet HVAC combine to reduce ambient noise in the building, liquid-cooled spotlights and a completely silent LED system eliminate added sound in the auditorium. Beneath the catwalks, wood reflectors were carefully placed to enhance speech legibility from every corner of the stage. 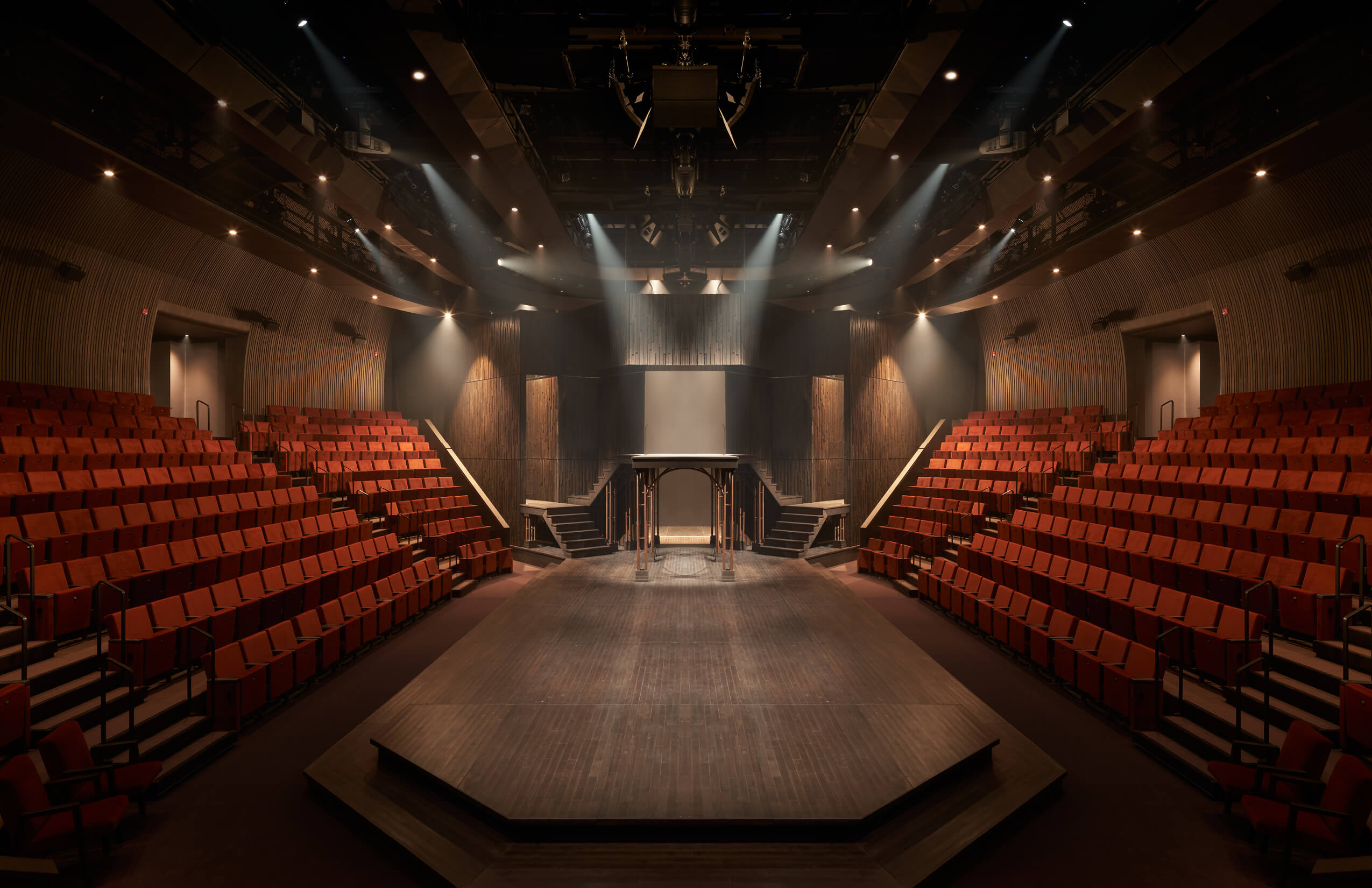 The star of the theatre is the thrust stage, crafted in Canadian birch and surrounded on three sides by plush seating. PHOTO: Doublespace

Two years delayed by the COVID-19 pandemic, the Stratford Festival of Canada finally inaugurated its new home in 2022. Appropriately, Shakespeare christened the program, and Stratford legend Colm Feore took the stage as Richard III. Walking the thrust stage, he intoned the play’s opening lines. It is a soliloquy often delivered with grandiosity and bombast, but Feore’s voice was soft, almost whispering: In this room, you could hear every syllable as if he were sitting next to you. “Now is the winter of our discontent / Made glorious summer by this sun of York.” He spoke, you listened, and everything else disappeared.