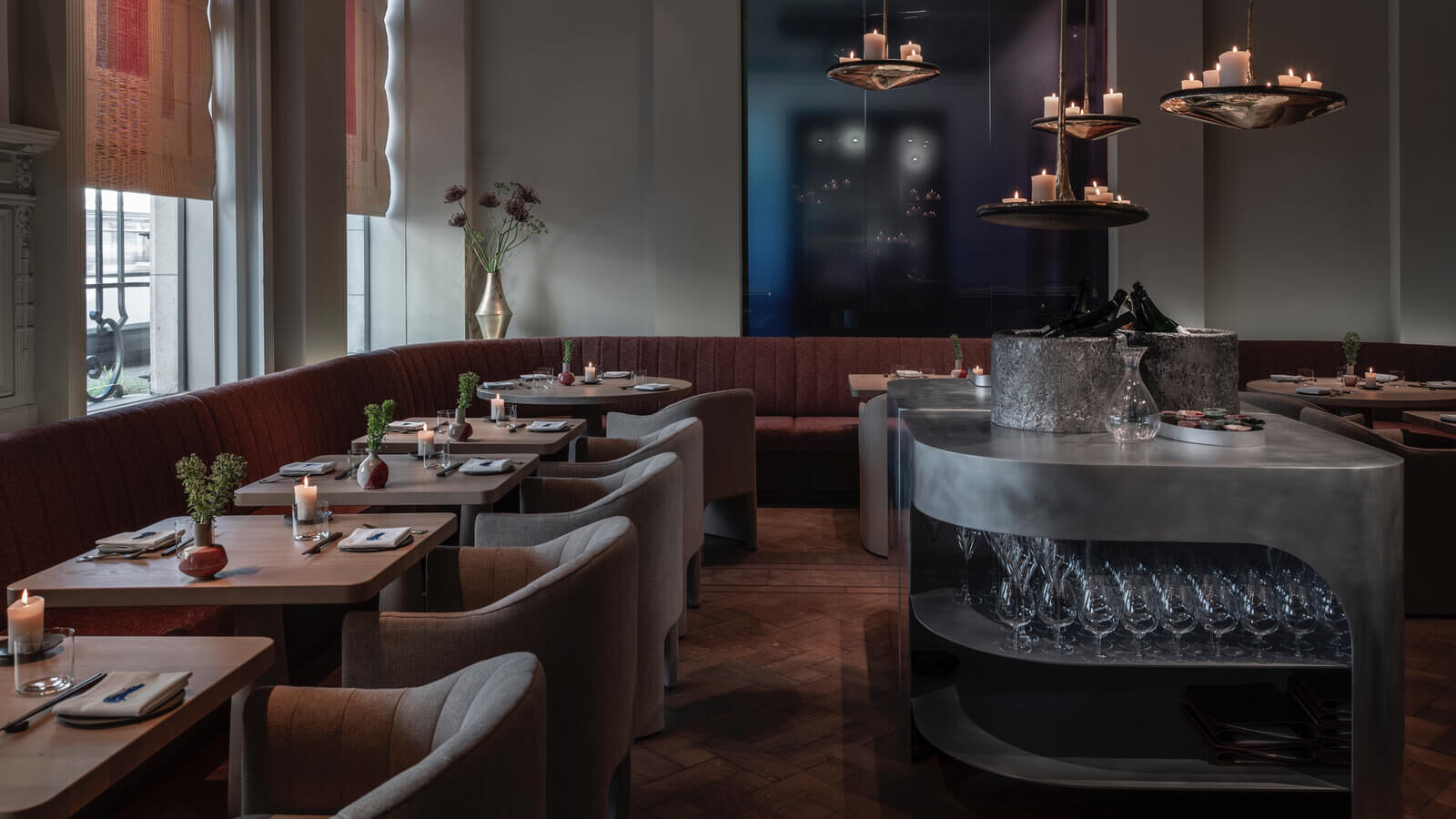 In Antwerp, a Moody Restaurant Bridges Past and Present

Space Copenhagen suspends an Antwerp restaurant between eras and emotions.

Antwerp is a place of rich juxtapositions, with ornate Renaissance buildings located alongside austere mid-century structures introduced to fill the holes left by the Second World War. In 2020, Copenhagen design studio Space Copenhagen completed its first project in the Belgian city: Le Pristine, a partnership with chef Sergio Herman located in a blocky 1960s concrete mid-rise in the city’s fashion district. Last summer, the studio re-teamed with Herman to open a follow-up restaurant right next door, this one built inside a grand 17th-century property that originally housed one of the city’s first banks. 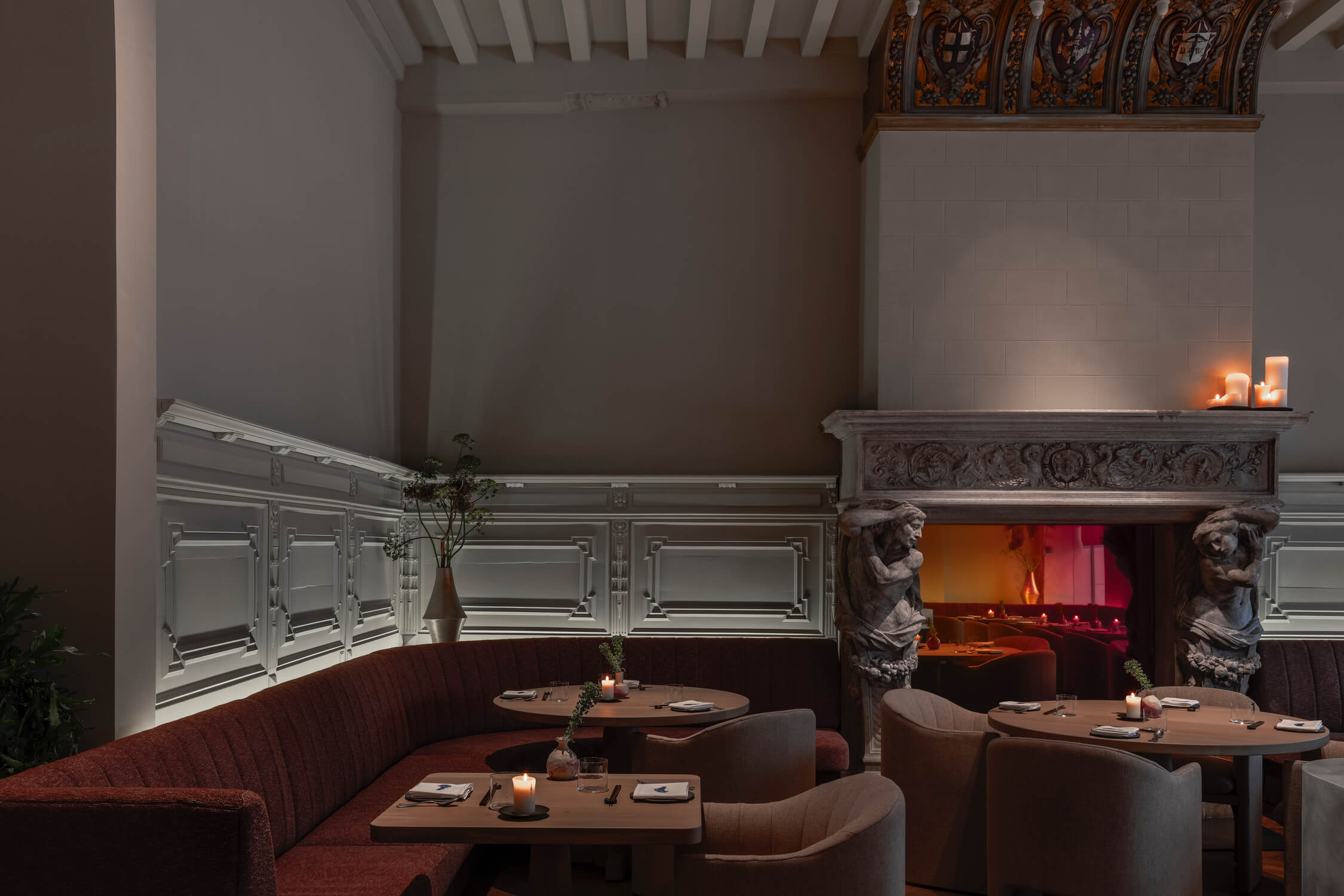 Like the streets around it, Blueness is a patchwork of many different identities. Inside the Japanese-meets-French eatery, minimalist interventions play off more classical architecture. A waiters’ station in solid aluminum provides a surprising counterpoint to carved sandstone and marble columns, while softly upholstered seating in muted sand and rose tones is positioned next to an elegant fireplace flanked by antique sculptures. 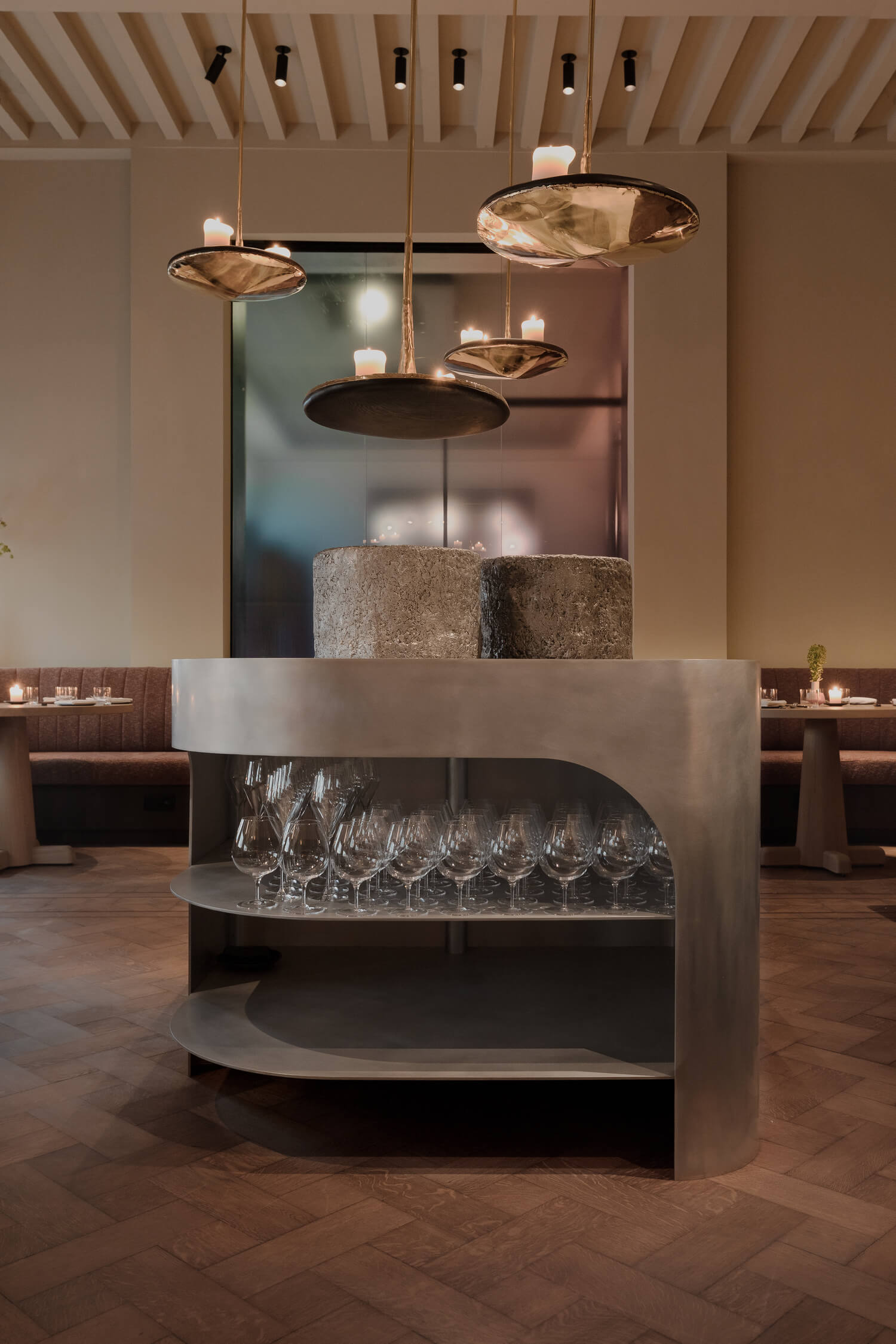 Through these unexpected pairings, Space Copenhagen set out to create what the firm describes as “a tension between past and future.” This out-of-time design concept gives the restaurant a dreamlike atmosphere that openly leans into melancholia. 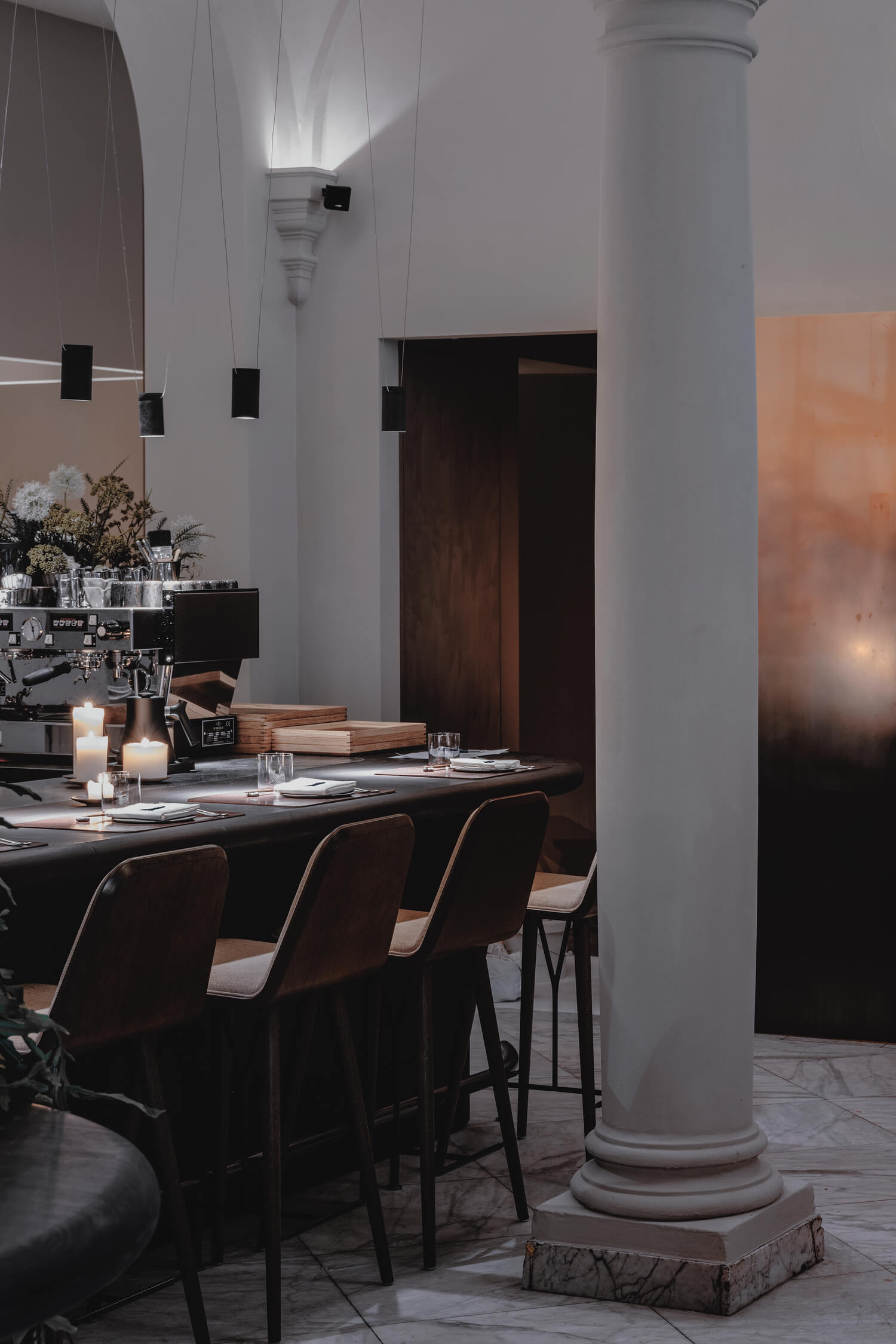 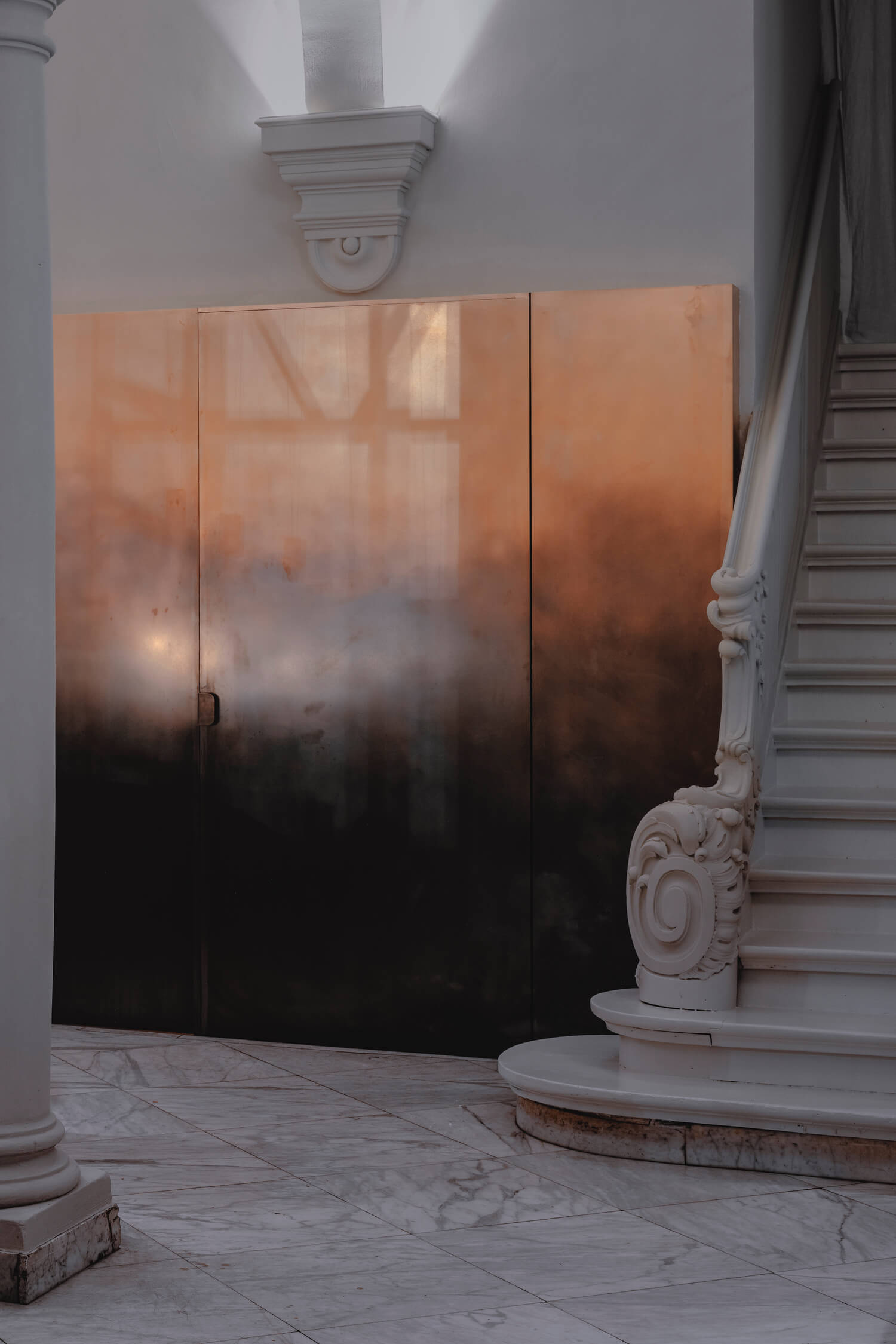 One can almost imagine an aristocratic ghost seated at the bar, delivering a plaintive sigh while enjoying a plate of crudo. That said, studio partners Signe Bindslev Henriksen and Peter Bundgaard Rützou took great pains to ensure that the space’s otherworldly elements wouldn’t tip over into alienation. “There’s nothing worse than entering somewhere and feeling like you can’t anchor yourself,” Henriksen says. 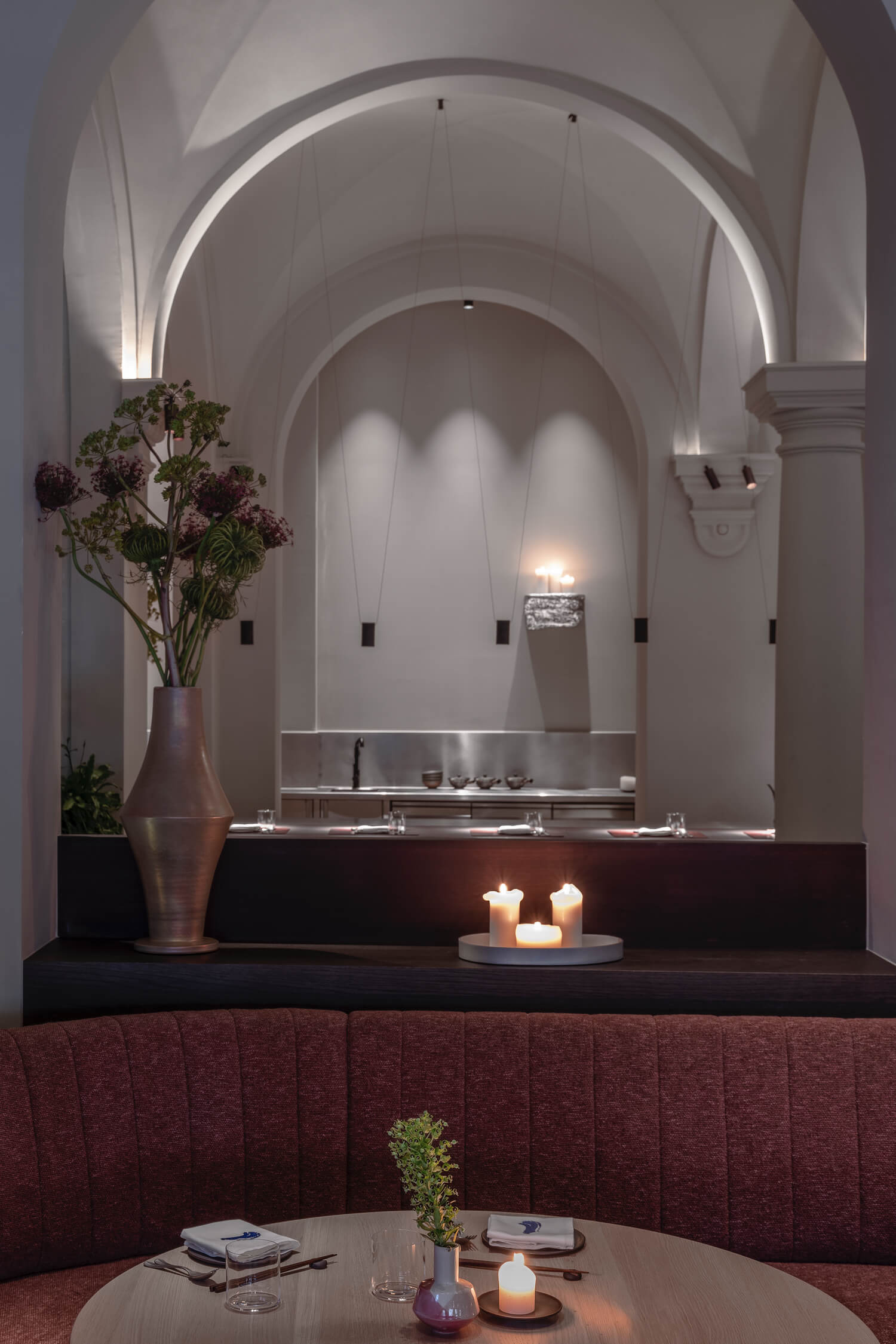 Candlesticks deliver a traditional counterpoint to the space’s low-hanging pendants, which temper the extreme height of its arched ceilings.

Instead, warm lighting keeps everyone grounded in comfortable grandeur. At the centre of the dining room, artist Valentin Loellmann’s brass chandelier of flying saucer–like discs pulls focus away from the vertigo-inducing ceiling height with candles suspended in glowing clusters. “Candles are reminiscent of home and coziness, and they have humbleness to them. Elevated in mid-air, they bring a sense of both mystery and belonging,” Rützou says. Mystery and belonging, past and future, minimalist design and Renaissance architecture: Blueness balances on the delicate edge of many contrasts. 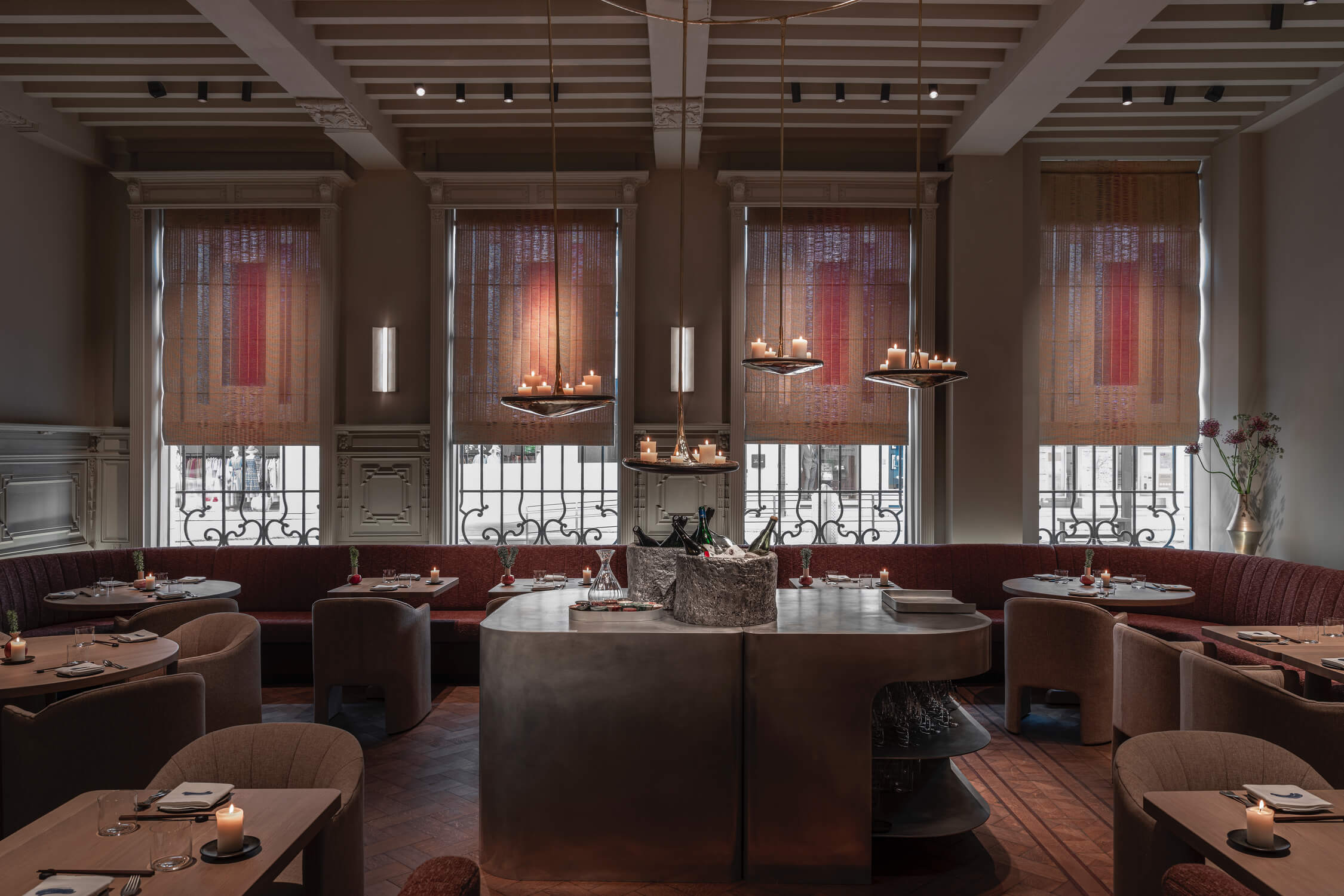 Space Copenhagen suspends an Antwerp restaurant between eras and emotions.