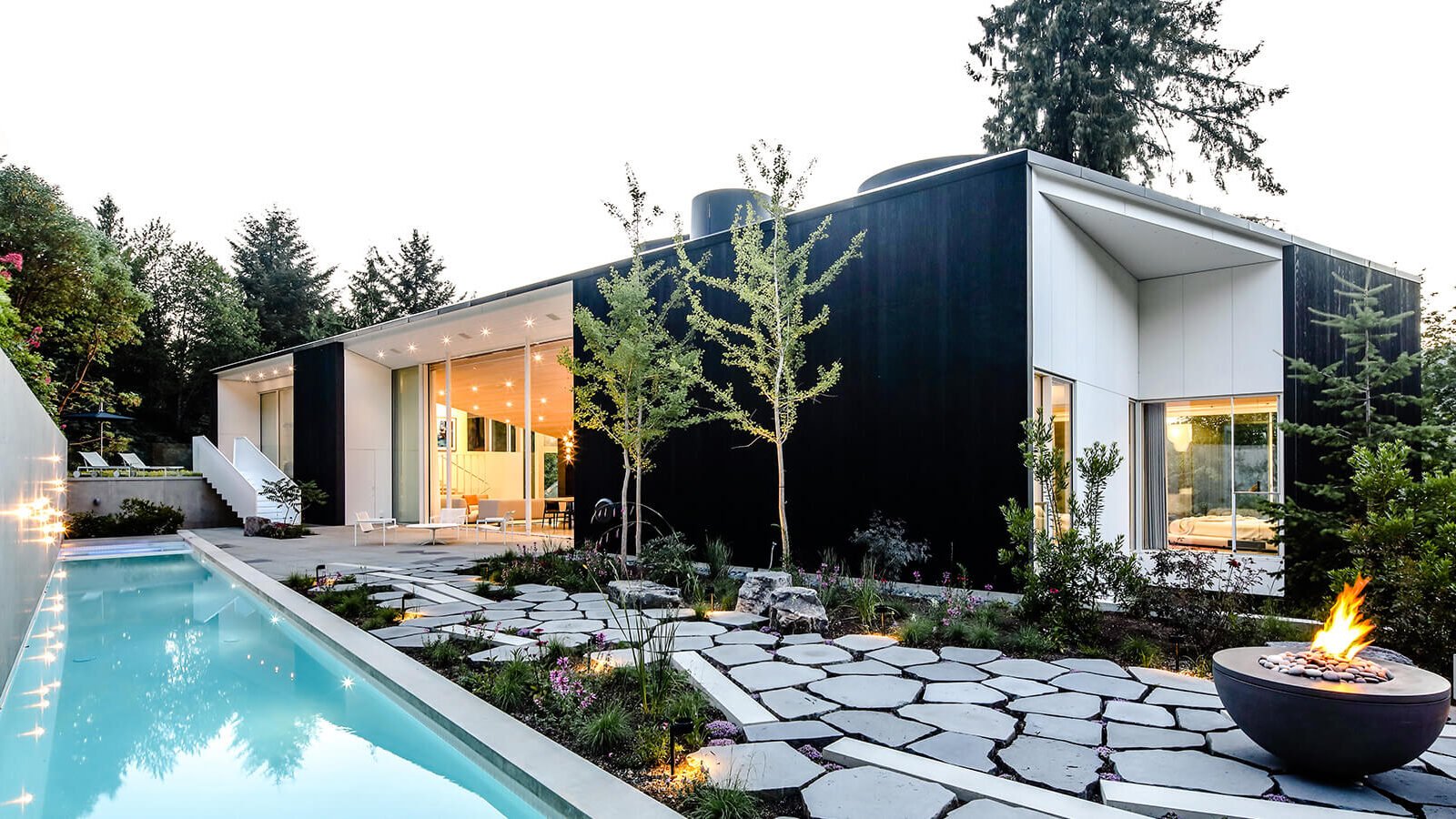 A Vancouver Home Makes the Most of its Sloping Site

Shoring up a steep slope in West Vancouver, BC, a house by BattersbyHowat Architects pushes West Coast modernism forward.

The site was essentially site-less, say architects David Battersby and Heather Howat (founders of BattersbyHowat Architects) of their recent West Vancouver residential project. Which is to say, it had a landscape without legacy or the sorts of constraints that have long served as points of inspiration for the iconic hillside houses that dot the West Coast from Vancouver to Los Angeles. There was no rocky outcropping here to inform the shape of the building, no stands of towering coniferous trees, not even a water view. Rather, it had space — a generous 75 metres of frontage in an area where 30 metres is more common — and an inhospitable 45-degree slope that was overrun with brambles and wild blackberries. Was it even developable? 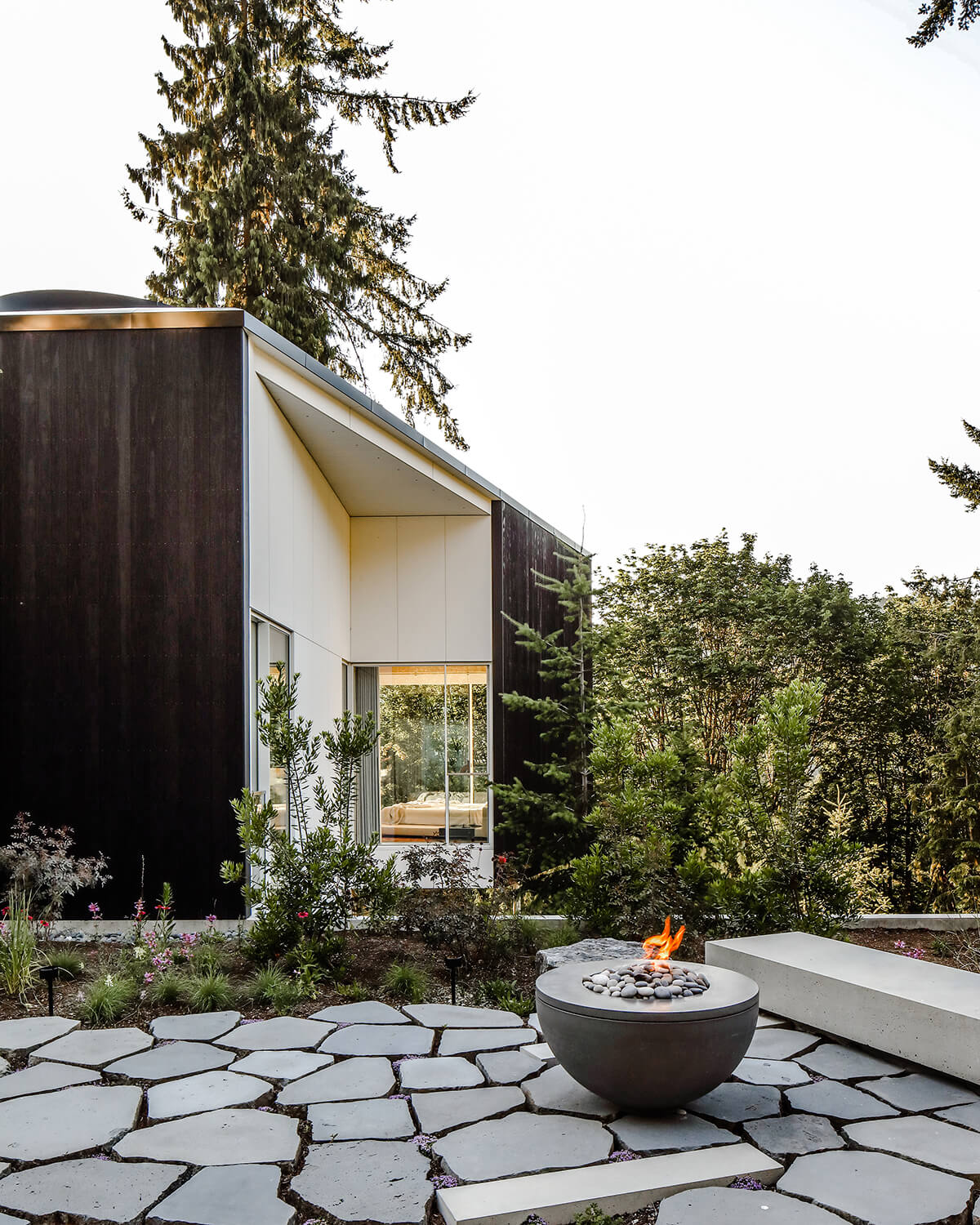 On the home’s exterior, composite panels from Azek frame the entrance (the soffits are white-painted hemlock). The vertical cedar siding is finished in a shou sugi ban treatment.

“We knew it wasn’t going to be something you’d find in the Hollywood Hills by Schindler or Lautner, something on stilts that hangs over the valley,” says Battersby, recalling his first impression. “The site was so steep, we actually had to make a site out of staggered retaining walls with a lot of vegetation in them that will fill up and allow them to disappear in time.” The house itself is the last act of retention. Taking the form of a long, elegant bar, it was built at the front edge of the slope to allow a structured garden and courtyard area to be added behind it, tucked neatly below the road’s edge and out of view of passersby. The house isn’t just a part of the landscape, says Battersby: “It facilitates it, this active, working thing. It actively retains the earth and bounds the space of the courtyard.” 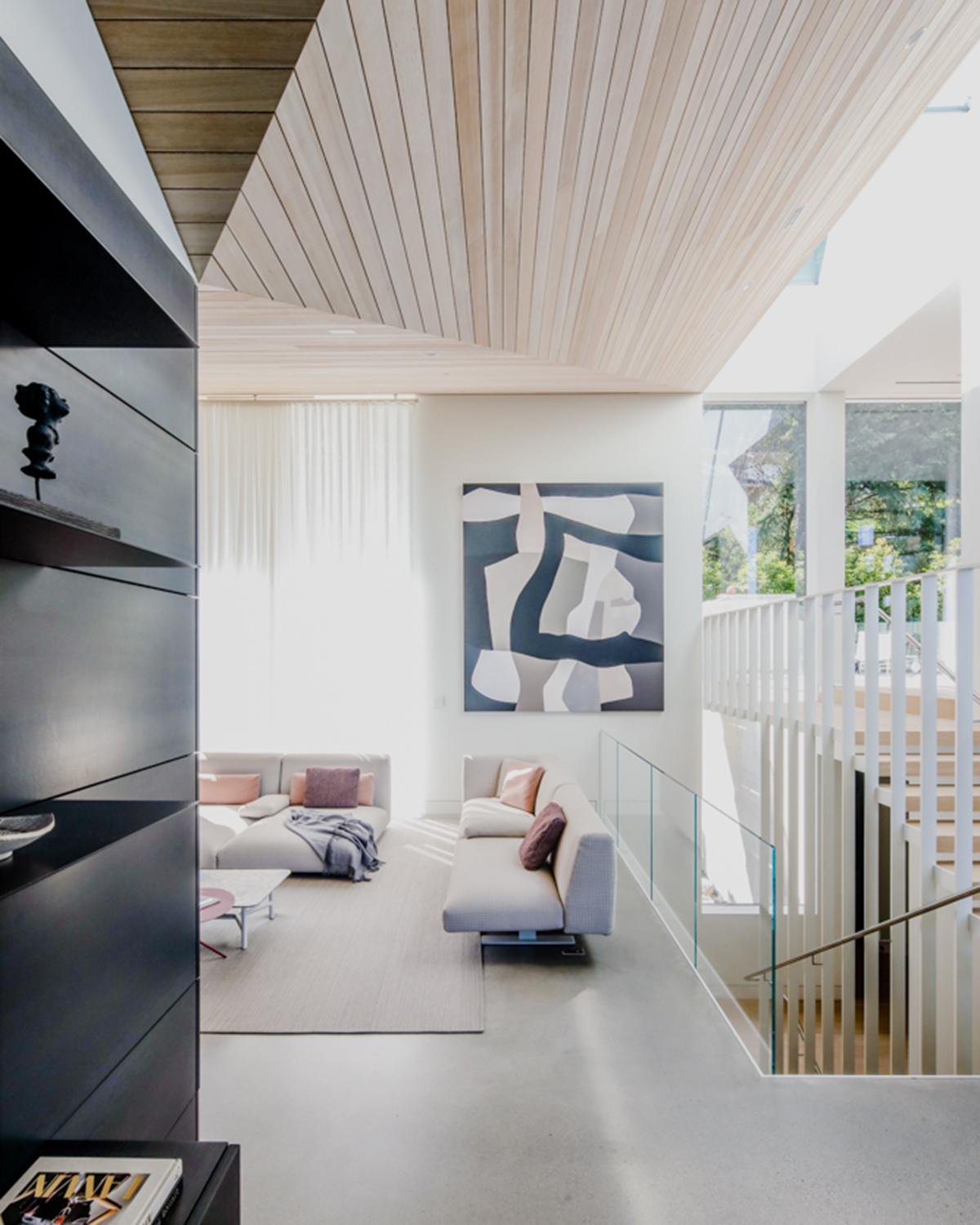 Inside, the pale hemlock ceiling facets off in all directions, bringing the building’s angular form into the light- filled interiors. Painting by Colleen Heslin.

As with their other recently completed residences, in Whistler and Halfmoon Bay, the architects selected contrasting black and white materials both to simplify the form (“Why have a complicated envelope for the sake of a complicated envelope?” Battersby asks) and to translate intention. White composite panels and hemlock soffits, also in white, are used around the openings in the facade to signal the transition between the interior and exterior spaces; vertical cedar siding is finished with a traditional shou sugi ban treatment to communicate an impassible, recessive mass that is sooty to the touch and shape-shifting in nature, says Battersby. “In bright sunlight, the wood grain suddenly appears. Out of the sun, the black is so deep and limitless, it looks like you could put you hand into it, like an Anish Kapoor piece.” 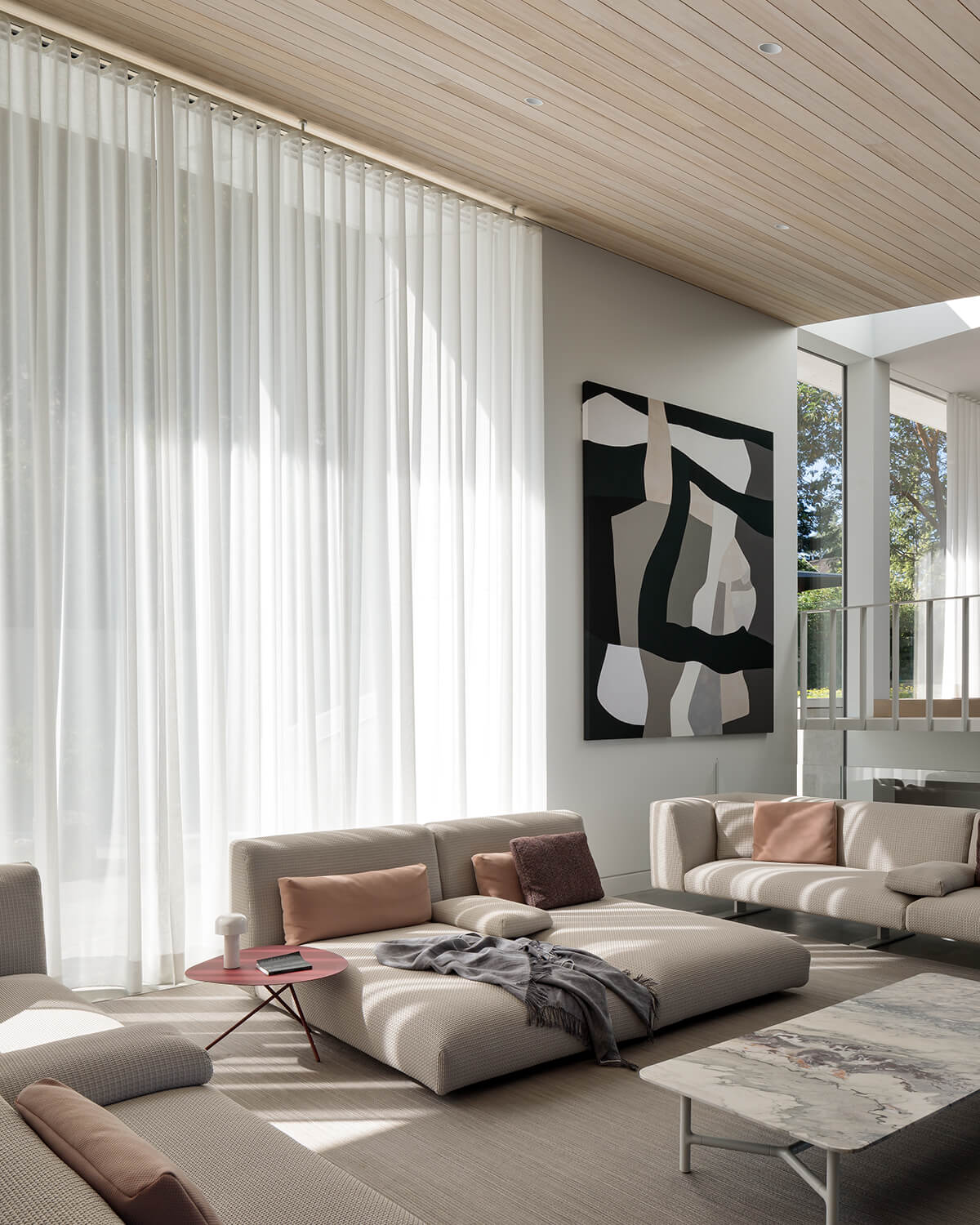 Generously proportioned Paola Lenti lounge seating fills the living area. The connection between indoors and out is softened with translucent full-height curtains.

Inside the house, the architecture’s long, linear shape guides a sequence of open, continuous living spaces comprising a vast 167 square metres in all. Drama comes from above by way of a pale hemlock ceiling that facets off in different directions, offering a sense of movement, warmth, sculpture and even wayfinding. In the central section of the main floor, the ceiling slants from one side of the house to the other, rising with the topography and drawing the eye up to the outside once again. 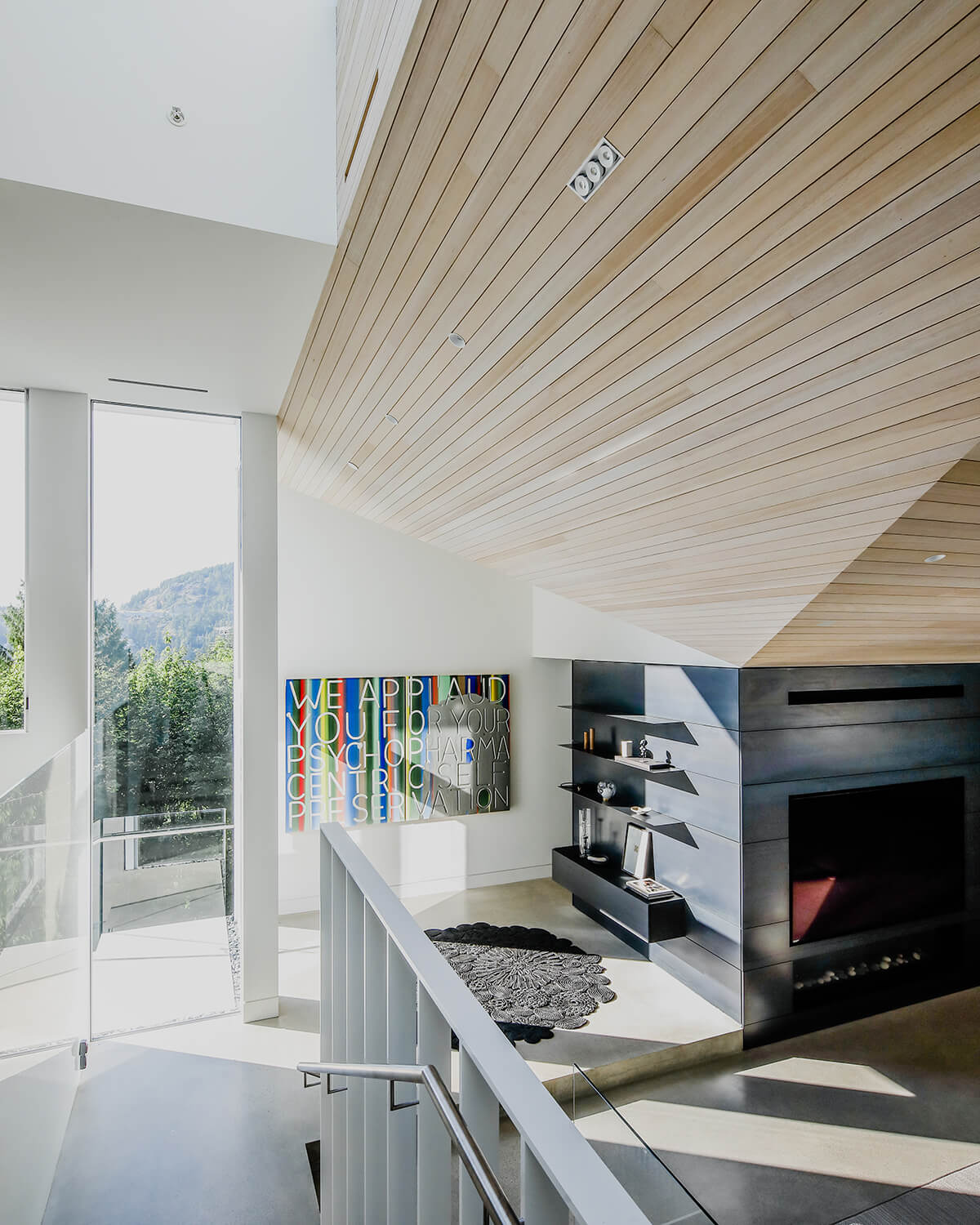 The mezzanine level offers views out to the forest beyond. Graham Gillmore’s We Applaud You for Your Psycho Pharmacentric Self Preservation hangs on the wall.

At the end of the living area, the ceiling plane turns in the direction of the main entry, where a graceful split-level staircase leads down to three second- ary bedrooms or up to a mezzanine-style level that contains the combined gym and home office. Left open to the rest of the house, it allows the full range of daily life to be taken in at a glance, creating a blurring of public and private space, just as early modern architecture blurred the boundaries between interior and exterior. Ross Bonetti, the client, appreciates the balance that results. “The pandemic crystallized my thinking about multi-functional living,” says Bonetti, who shares the house with his wife, Melissa. “This five-foot level change offers views into the main room, and you don’t feel confined.” 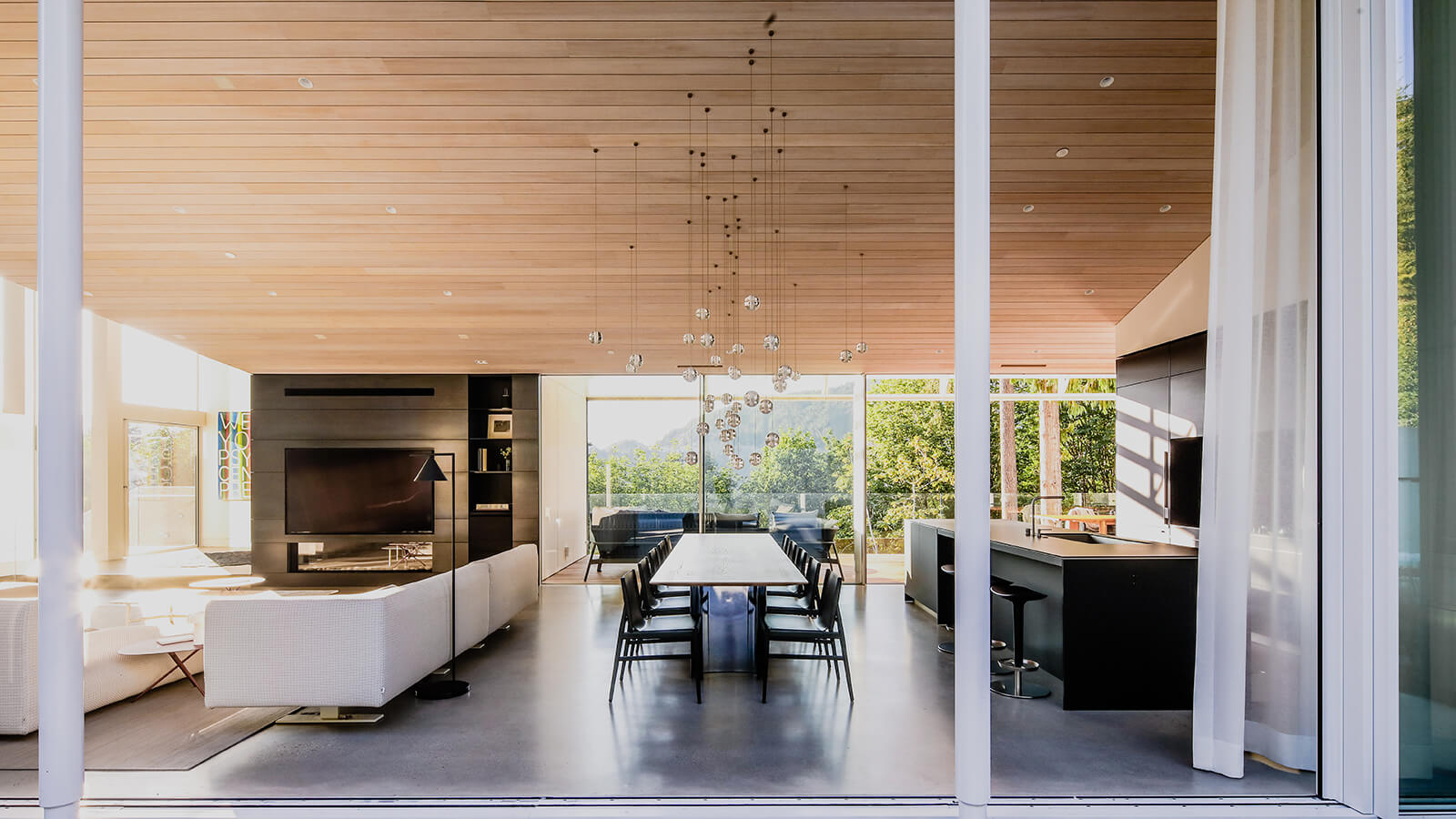 A constellation of iconic Bocci lights is suspended over the dining table of the open kitchen (by Italian brand Dada).

For Bonetti, the interior design is biographical in nature, tracing the evolution of Livingspace, the design business he started in Vancouver in 1988. What began as a showroom for European furniture and storage systems has expanded over time to include kitchens and bathrooms and a contracting and design division. All of it comes together here as a case study, or a testing ground for contemporary design, he says, noting the industrially informed Dada kitchen and the enveloping Paola Lenti seating in the living area, a personal favourite. 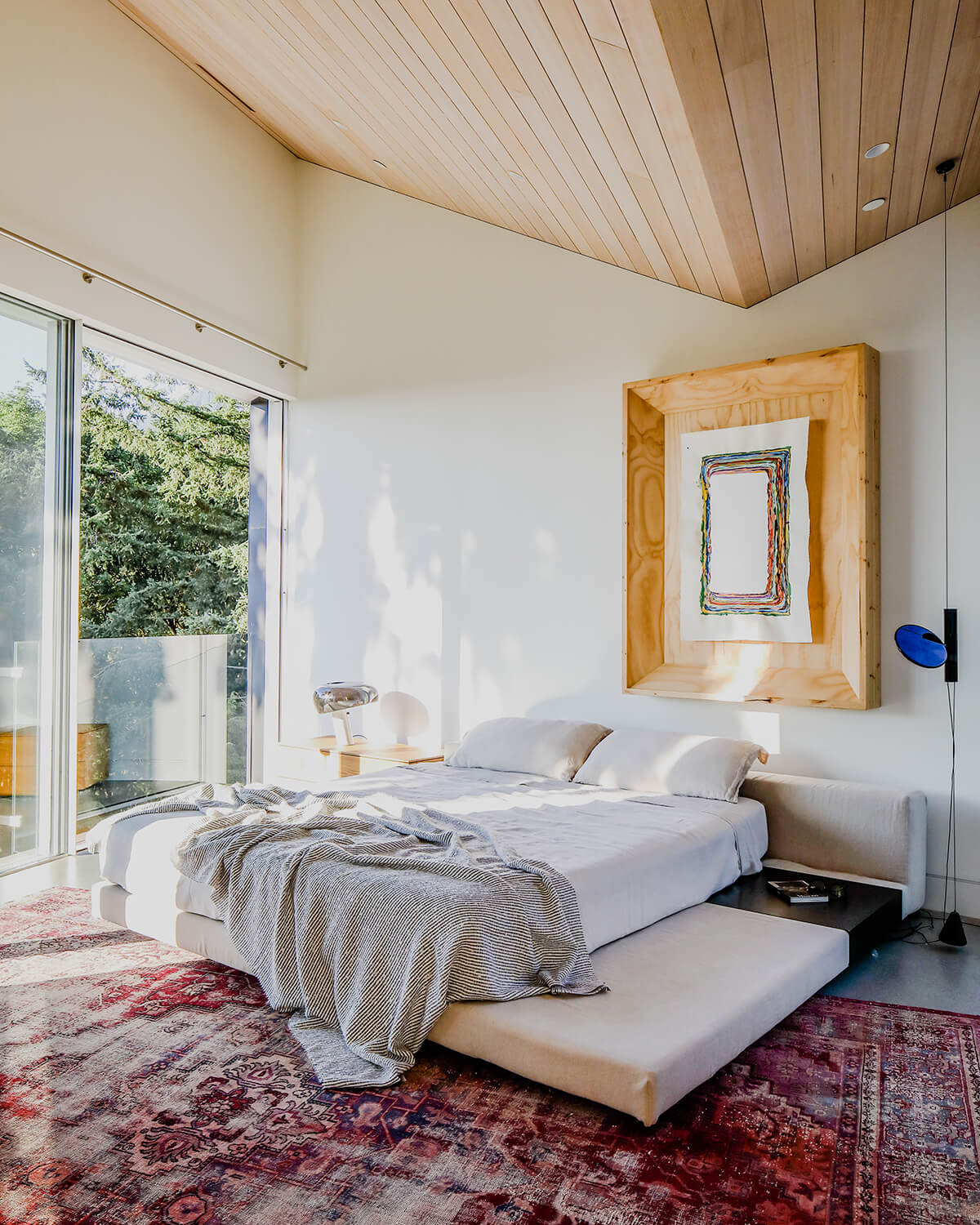 In the sunlit bedroom, an artwork by Jeremy Hof hangs above Ivano Redaelli’s You and Me bed. Lighting by Flos

But at the end of the day, he adds, it’s where he lives, a place to take shelter in a landscape both old and new. “You don’t have a sense of any other property around you — only the trees,” he says. “On the darkest, rainiest day, you’re still within all the greenery and connecting to the outdoors, even while you’re inside the house.” 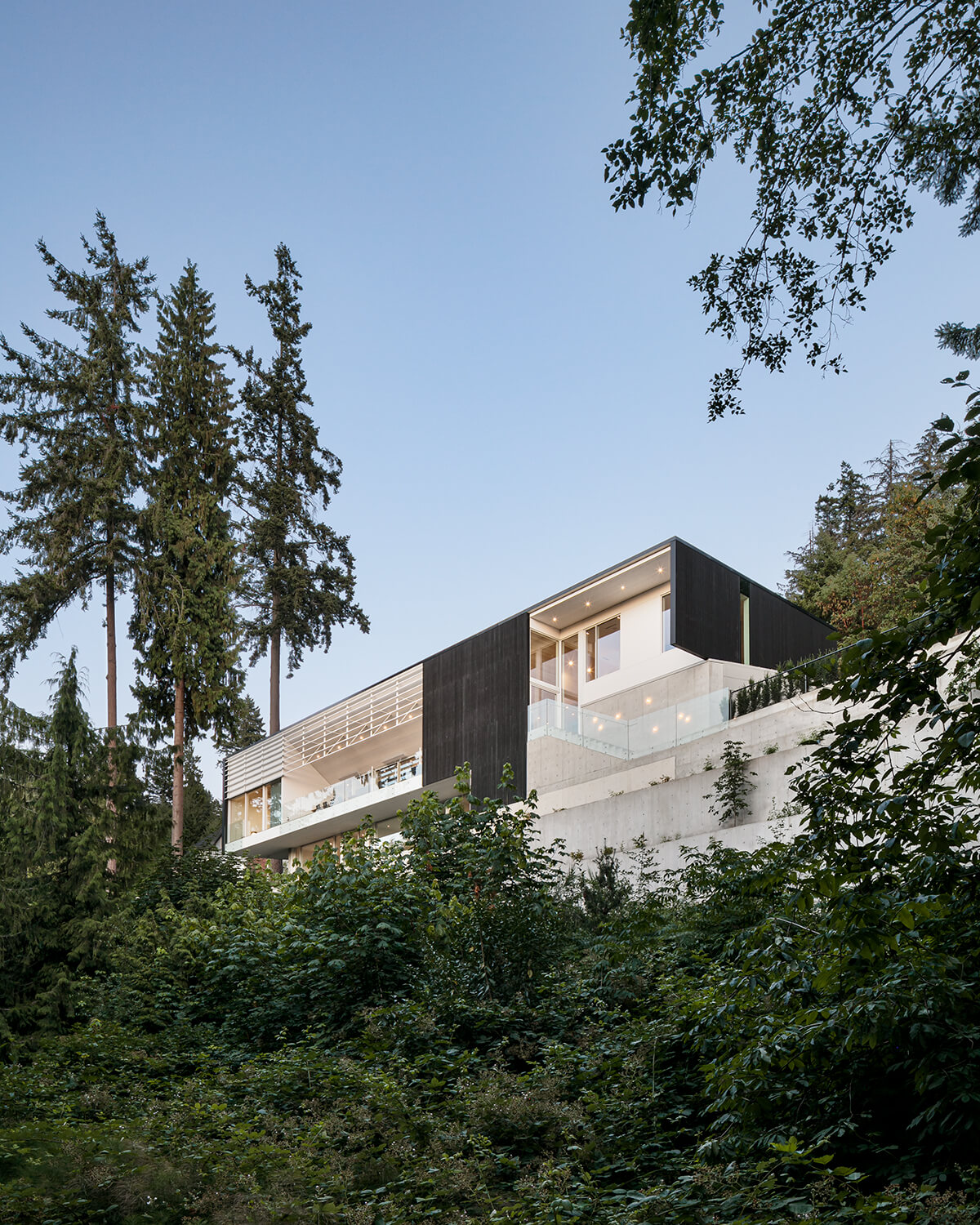 The back of the house overlooks a steep, forested slope. BattersbyHowat had to build a series of retaining walls to secure the home. 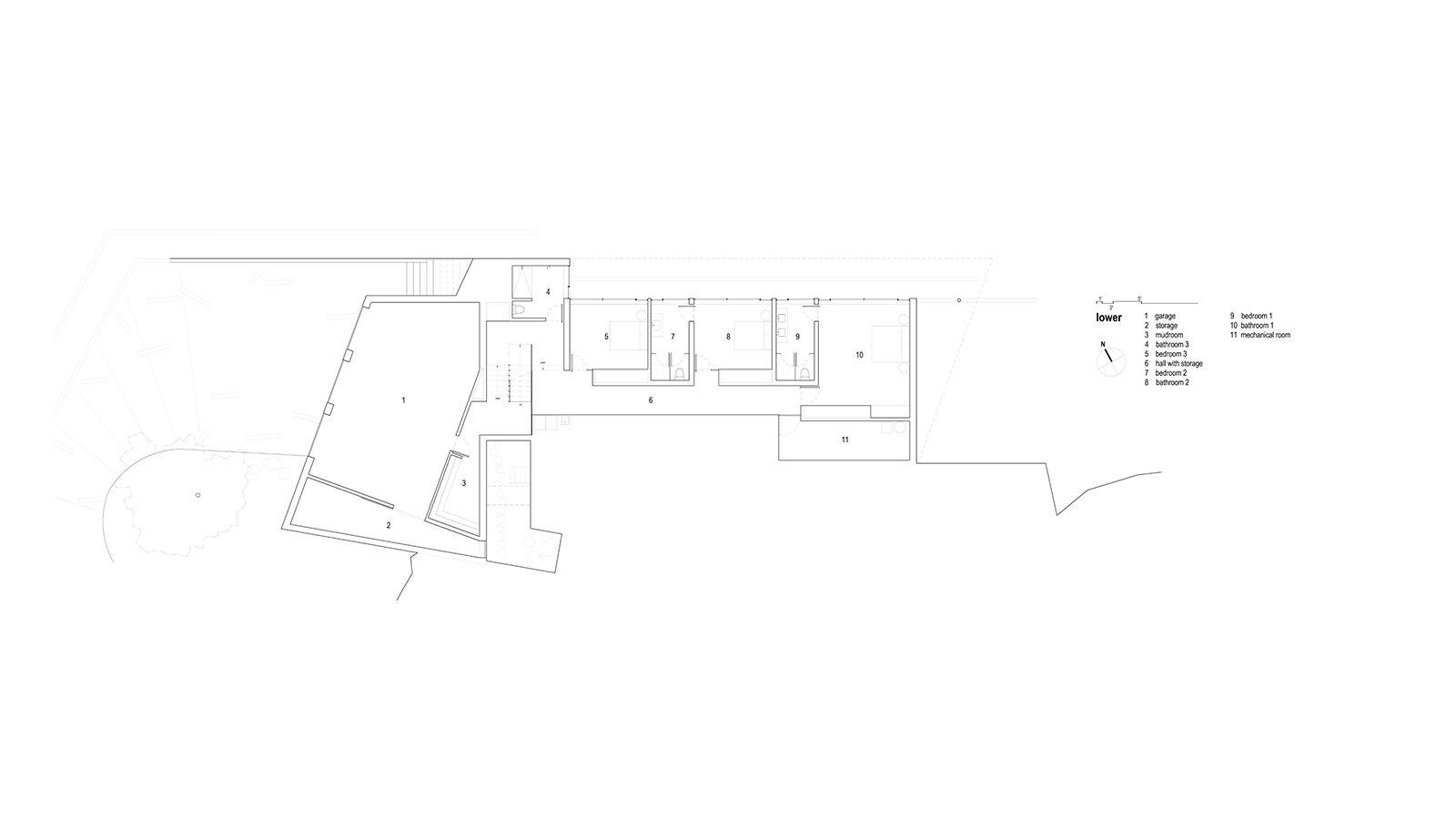 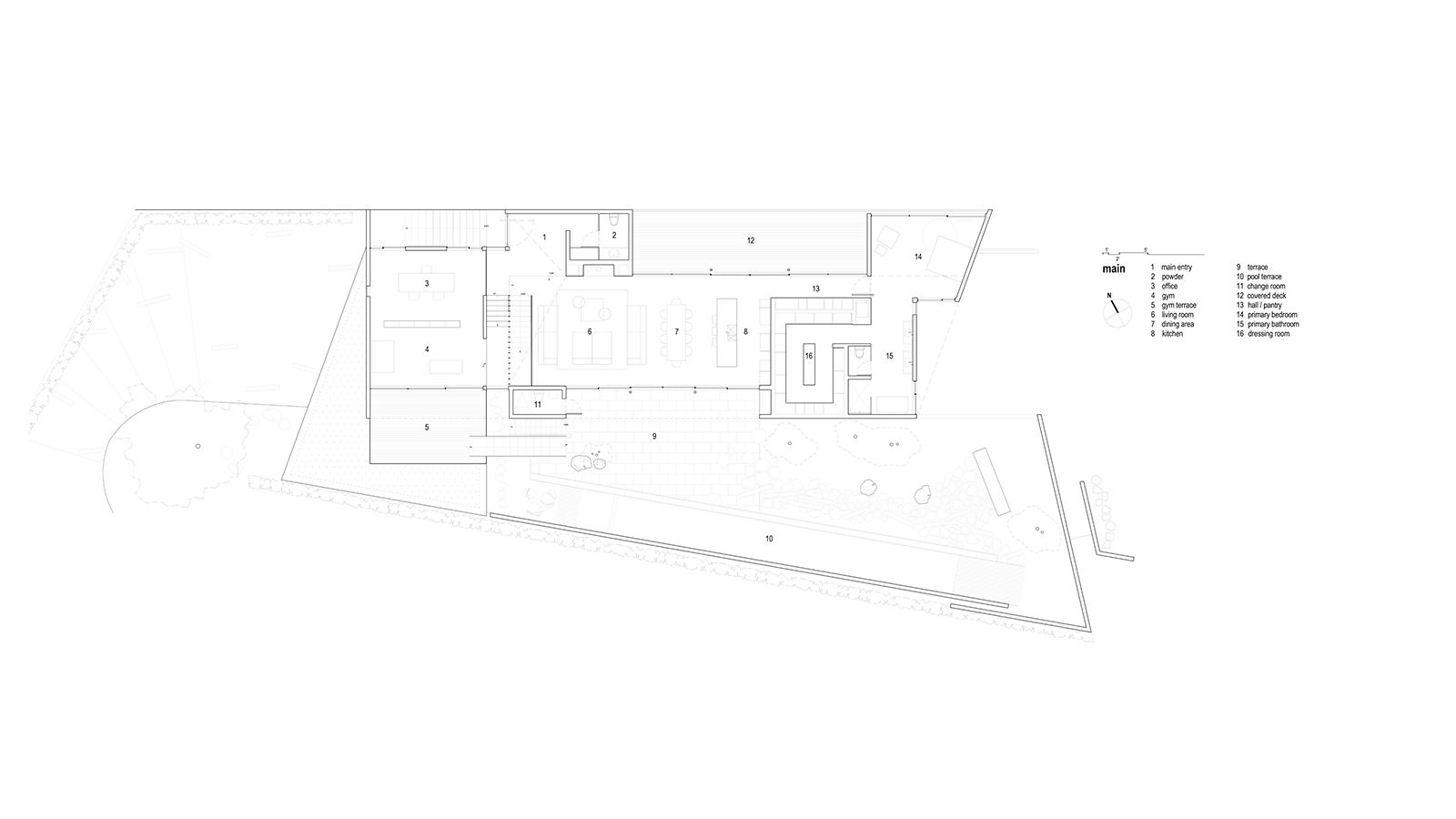 Shoring up a steep slope in West Vancouver, BC, a house by BattersbyHowat Architects pushes West Coast modernism forward.