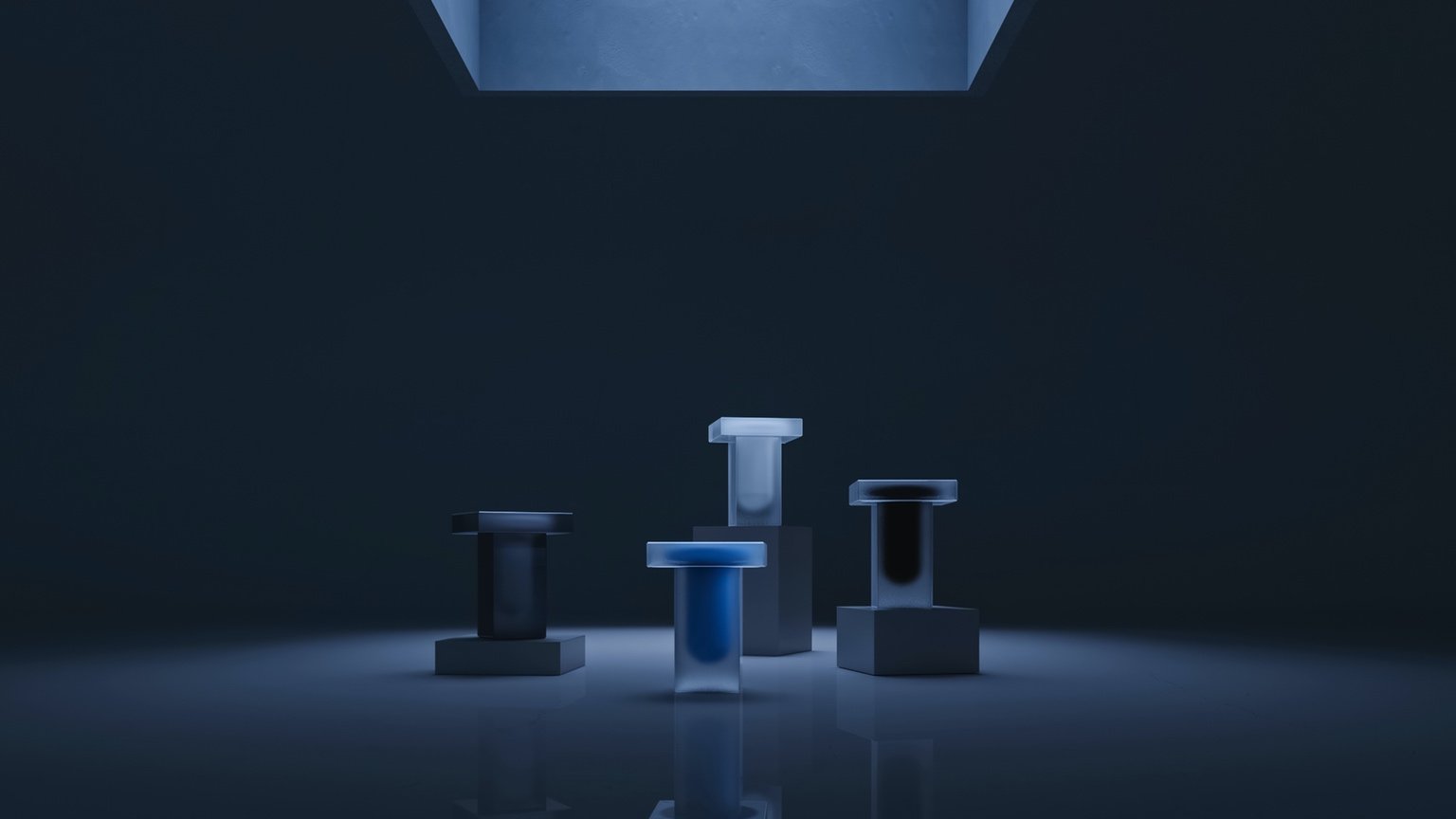 3 New Furniture Designers Who Made Their Mark in 2022

After taking the world by storm this year, new furniture designers Dean Norton, Kickie Chudikova and Nifemi Marcus-Bello are officially a trio to watch.

The most exciting new furniture designers are never those who start their day thinking about creating a new product. Instead, they’re the ones who offer interpretations of the world around them — pulling connections from unexpected sources of inspiration to deliver a table or chair that stirs human emotions as much as it meets a basic human need. The return of this year’s global design shows brought many opportunities to admire fresh talents. As we travelled the world, we discovered several new-to-us designers addressing functionality while also delivering a strong point of view. Here is a trio of creatives that left us excited about things to come.

Click below to jump directly to each new furniture designer’s profile.

THE INSTALLATION ARTIST: Dean Norton, who brings gallery-sized wonders down to a domestic scale

THE ECOLOGIST: Kickie Chudikova, who creates furnishings and accessories that draw from both biology and fantasy

THE INDUSTRIAL CRAFTSMAN: Nifemi Marcus-Bello, who approaches his homeland’s materials with a modern sensibility 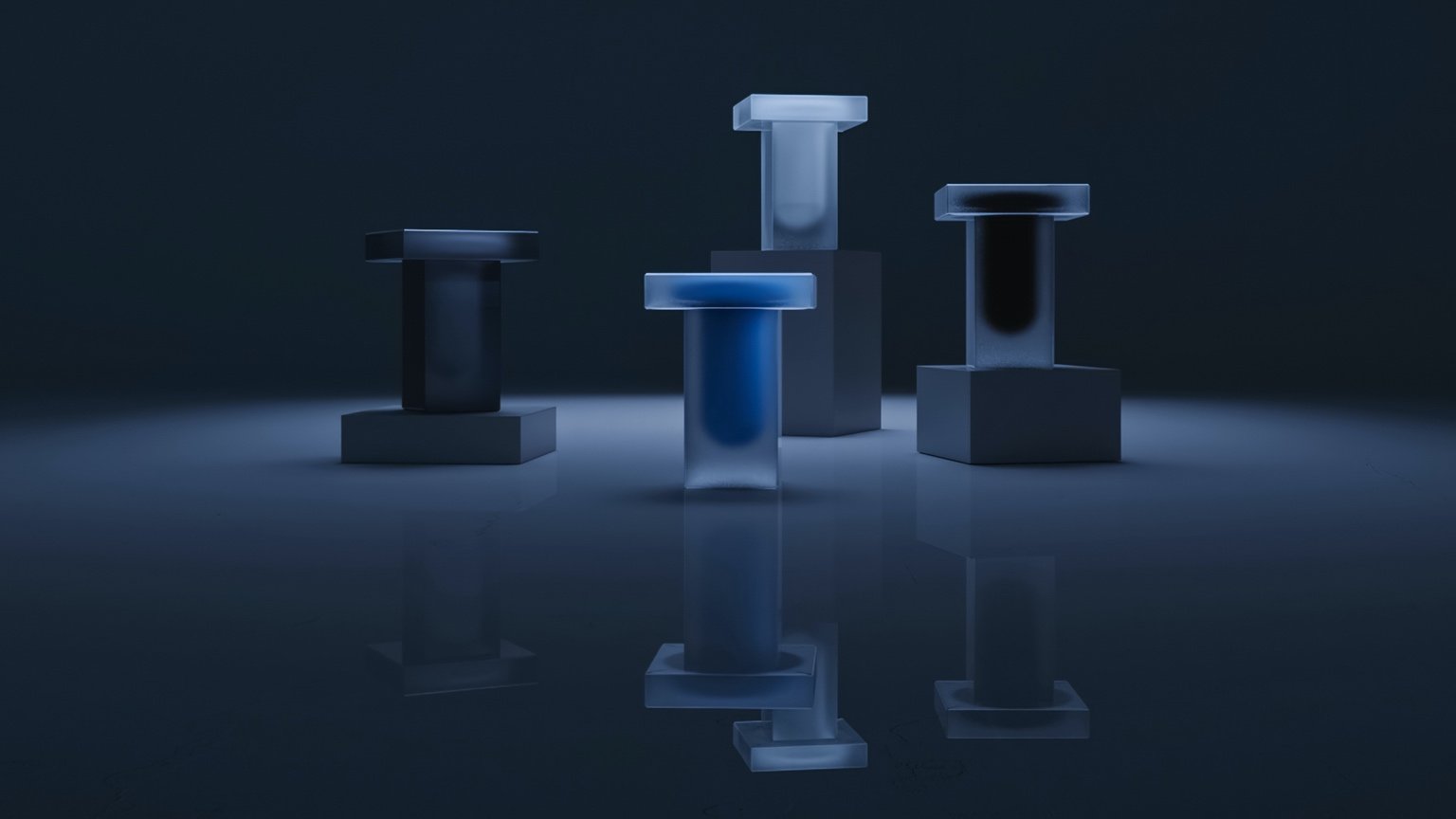 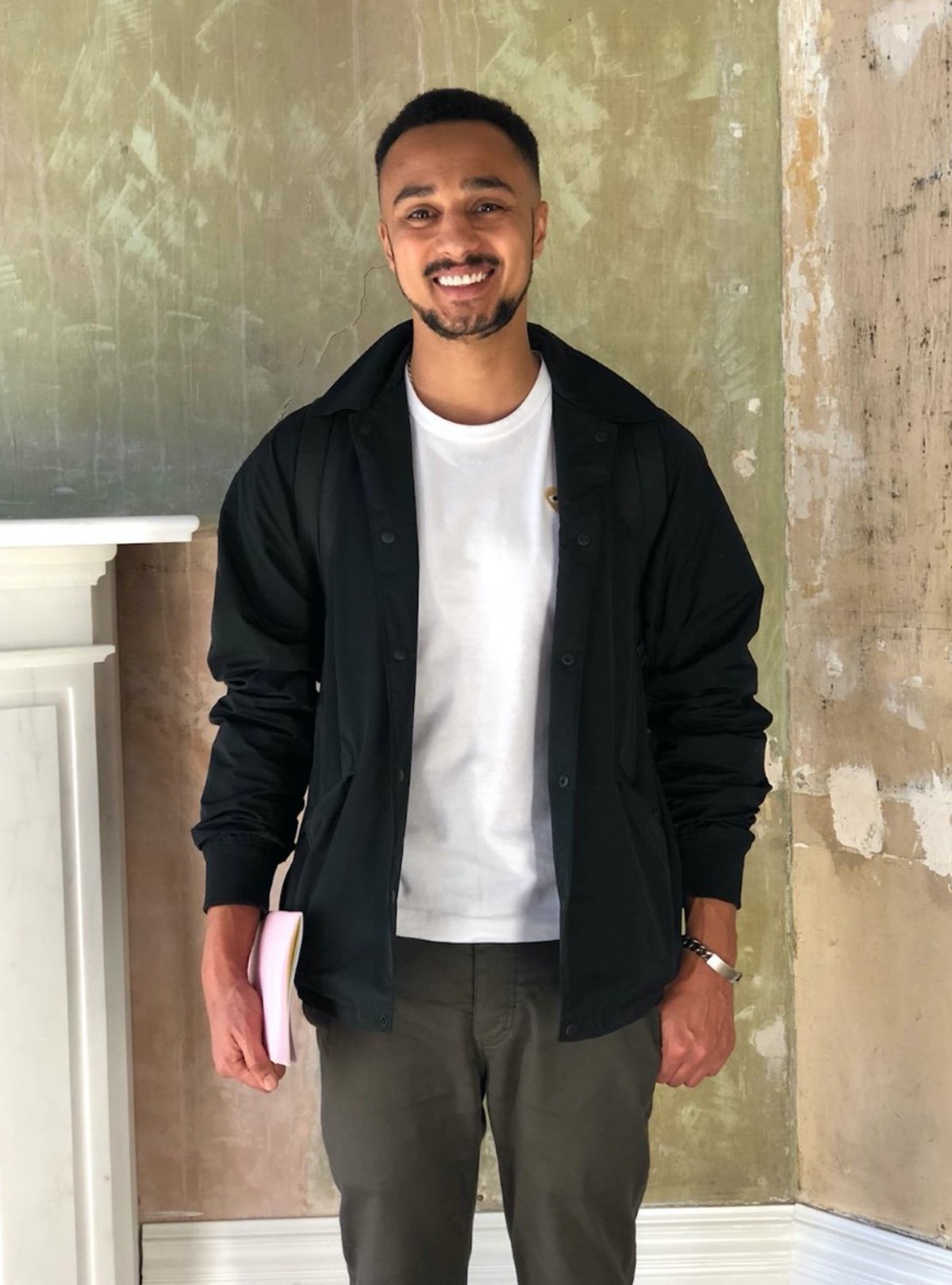 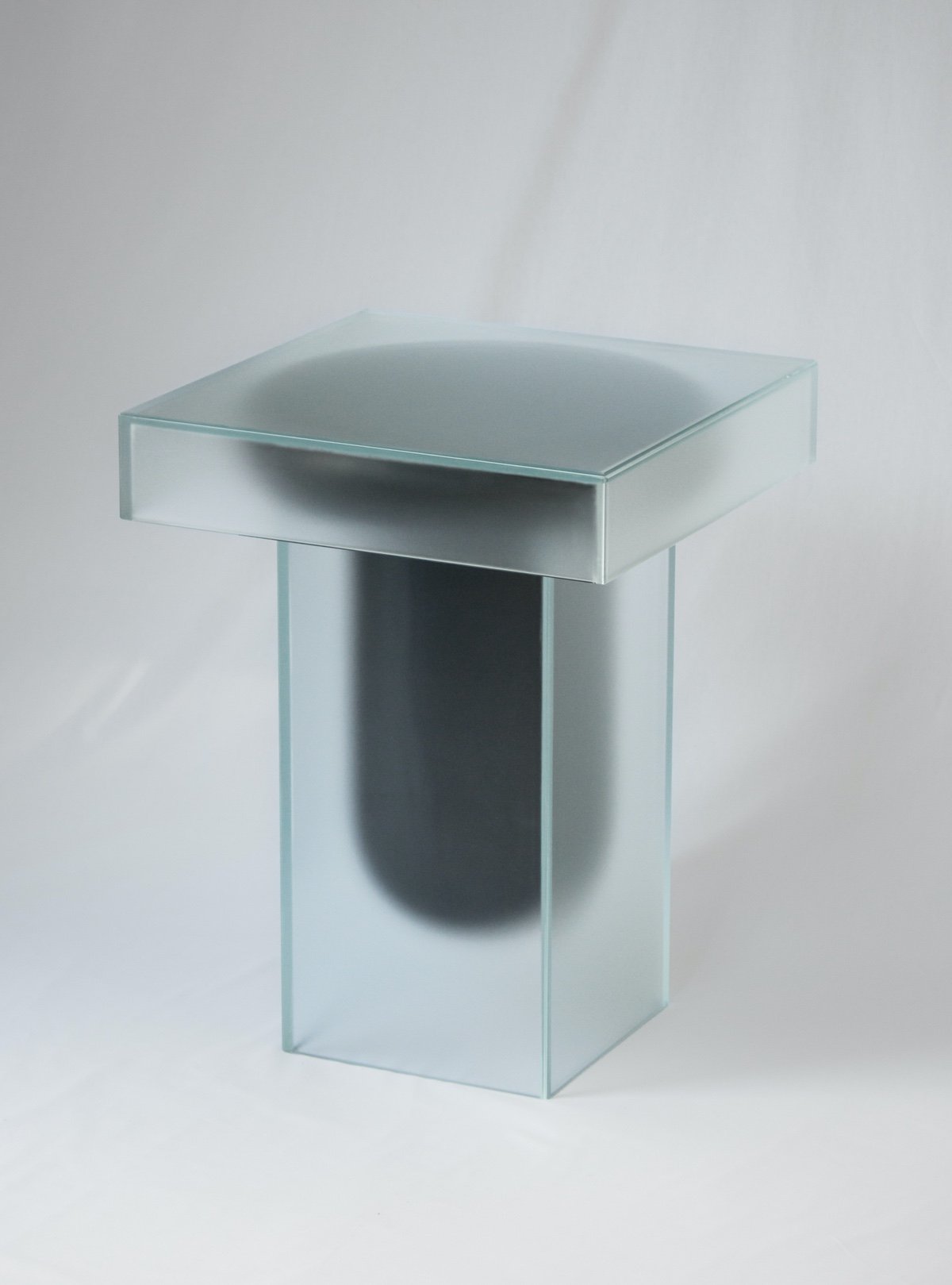 The Containa side table by Melbourne-based designer Dean Norton has a rich interior life. A cubist interpretation of a Russian doll, it combines a foggy glass shell with a second, smaller form that seems to glow from within. Norton’s Daylight Forever lamp takes things a step further by presenting a seemingly endless array of light bulbs — almost as though it is a portal to the multiverse. 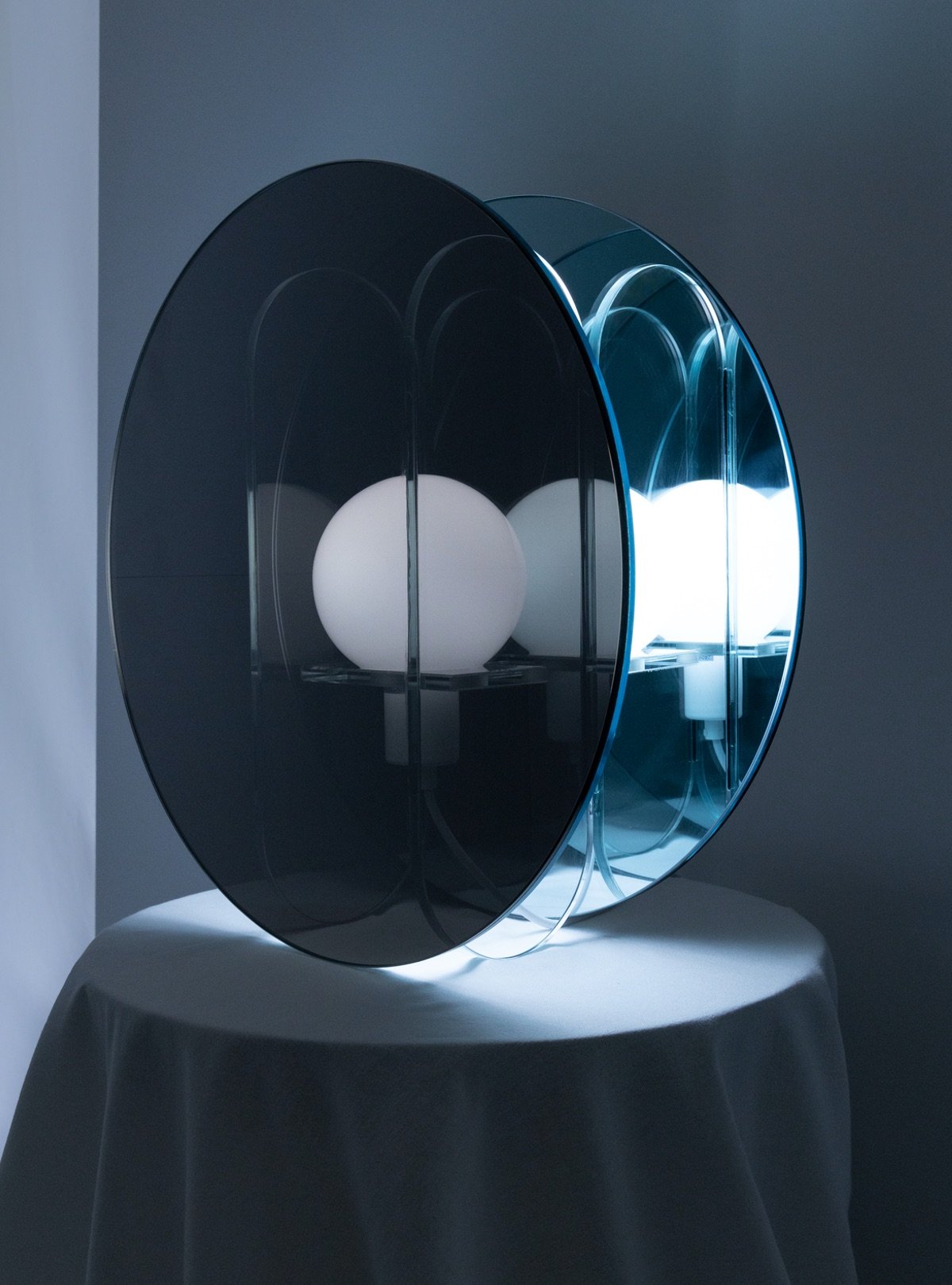 Daylight Forever sandwiches a light bulb between an arrangement of glass discs and tinted mirrors. 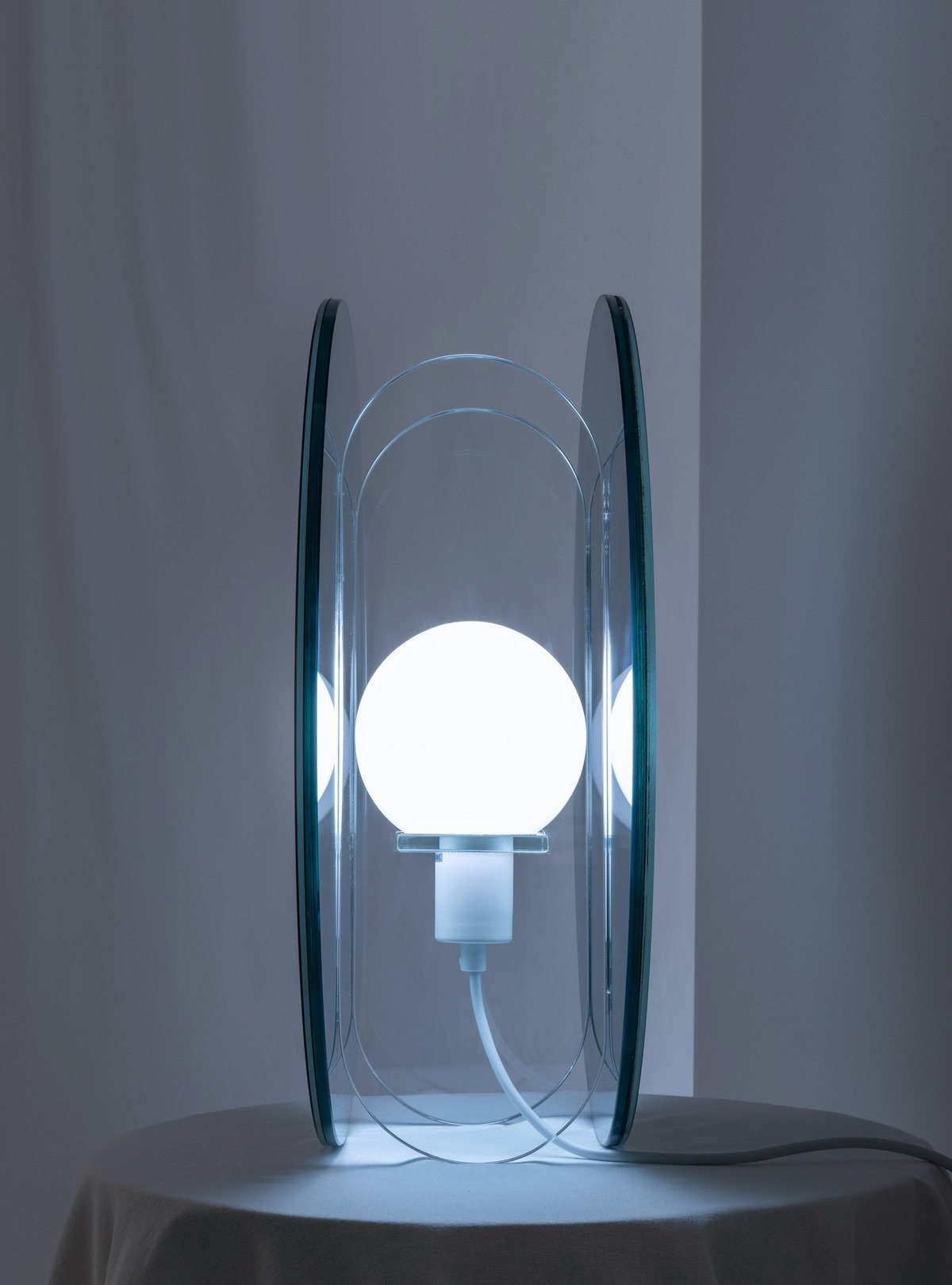 Both illusions function like scaled-down versions of contemporary art installations, playing with physical boundaries in a way that evokes Dan Flavin and Yayoi Kusama. “I’m trying to deliver artistic expressions through pieces of furniture,” Norton says. “I want my designs to have an impact in the spaces they’re placed in, and I want people to have an emotional response as they try to work out how something is done.” 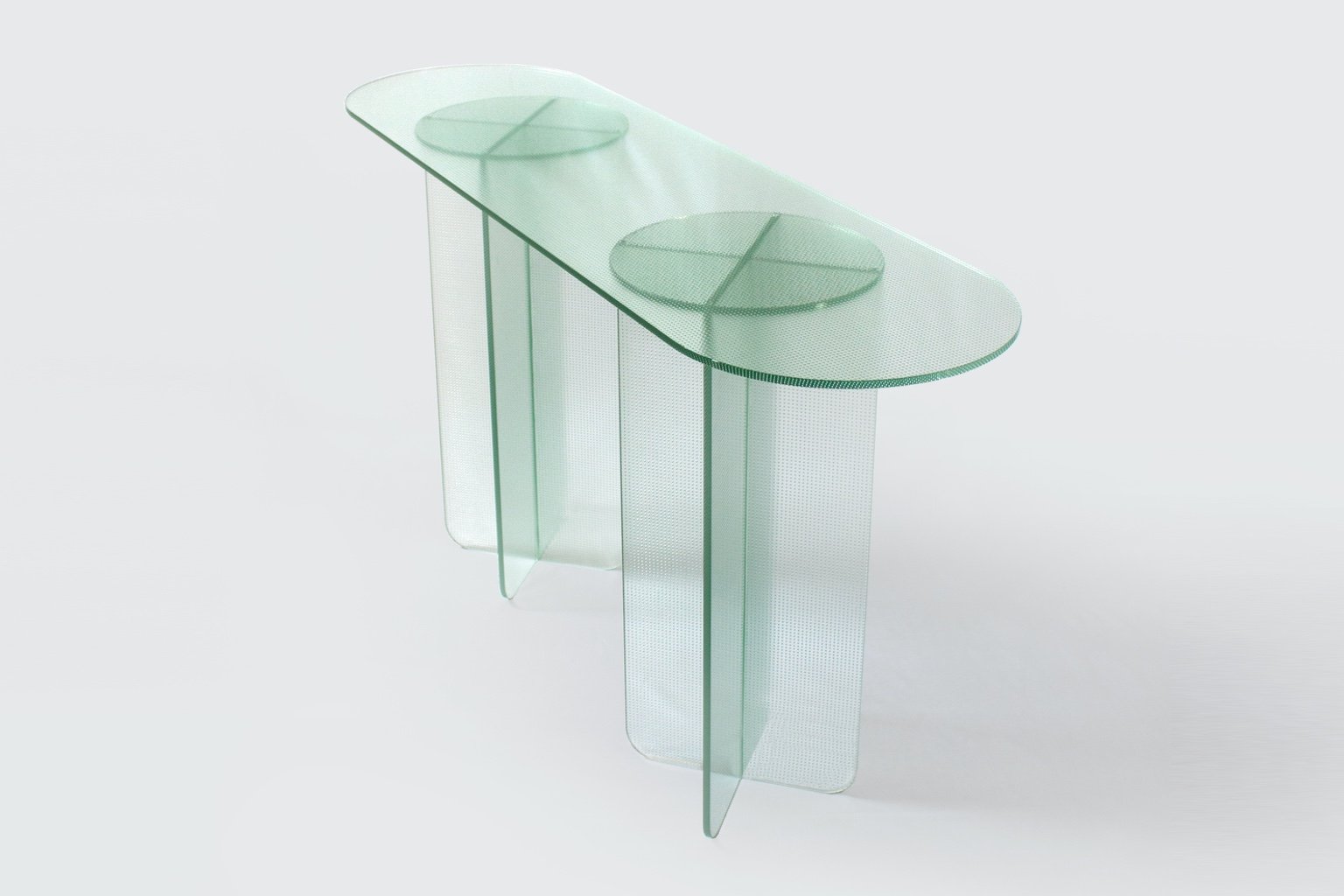 Norton’s skill at creating entire worlds within the confines of clean-lined geometry reflects his layered educational background. After starting off studying graphic design, the Essex, U.K., native then switched to a degree in retail interior design from University of the Arts London. (Time off between the two programs led him to explore Australia, where he relocated permanently in 2014.) After several years spent envisioning store windows and product displays at various interior design firms, Norton began designing products of his own in 2017. 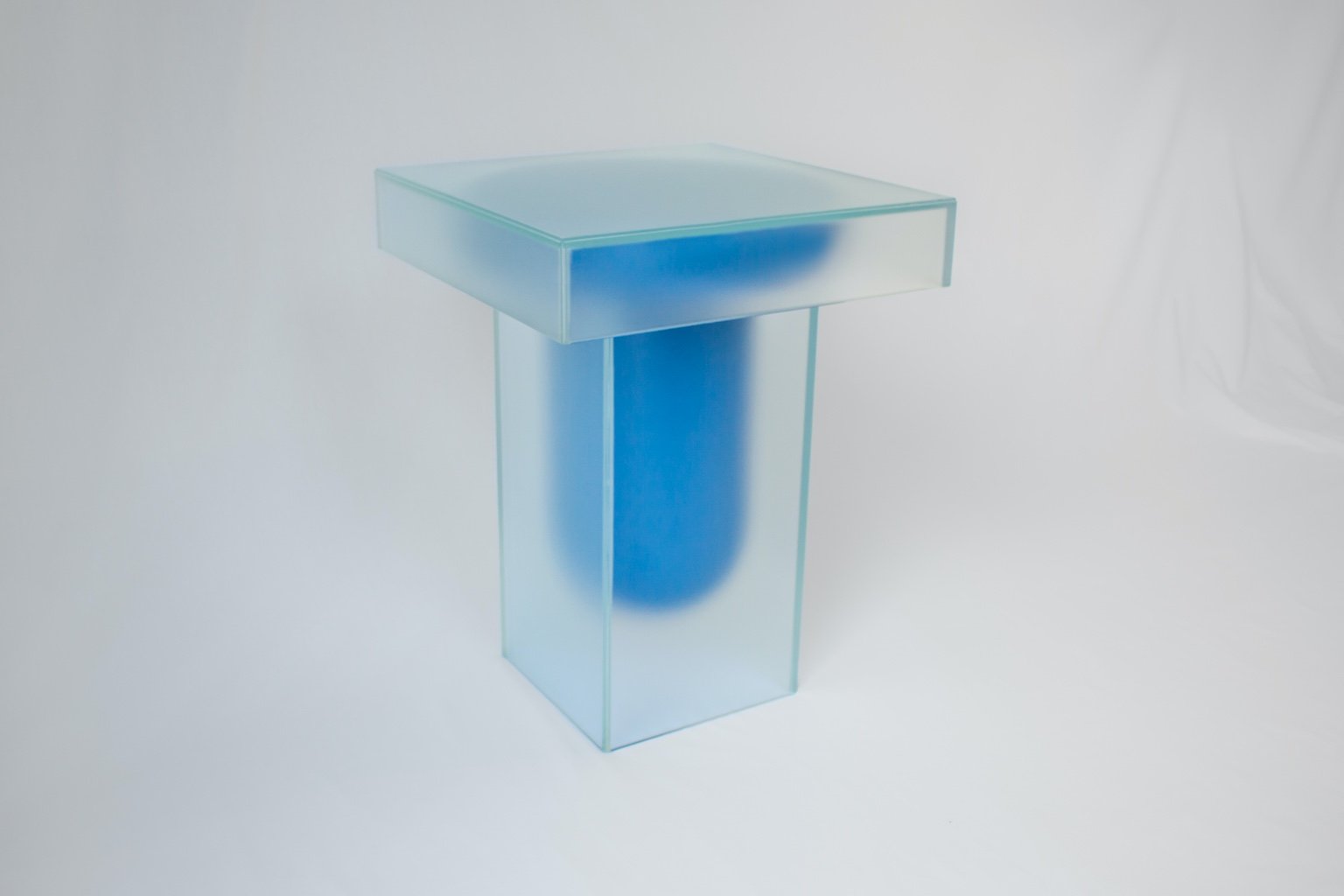 Many of his recent launches are a response to Melbourne’s COVID-19 lockdown, which was one of the world’s longest. “I was feeling contained — emotionally, physically and creatively,” he says. “[Containa] gave me an avenue to explore that.” First unveiled in Melbourne, the table then made its way to Milan’s Rossana Orlandi Gallery during this year’s edition of Milan Design Week. Hopefully there’s even more boundary-pushing and border-crossing in store for Norton in 2023. _ERIC MUTRIE 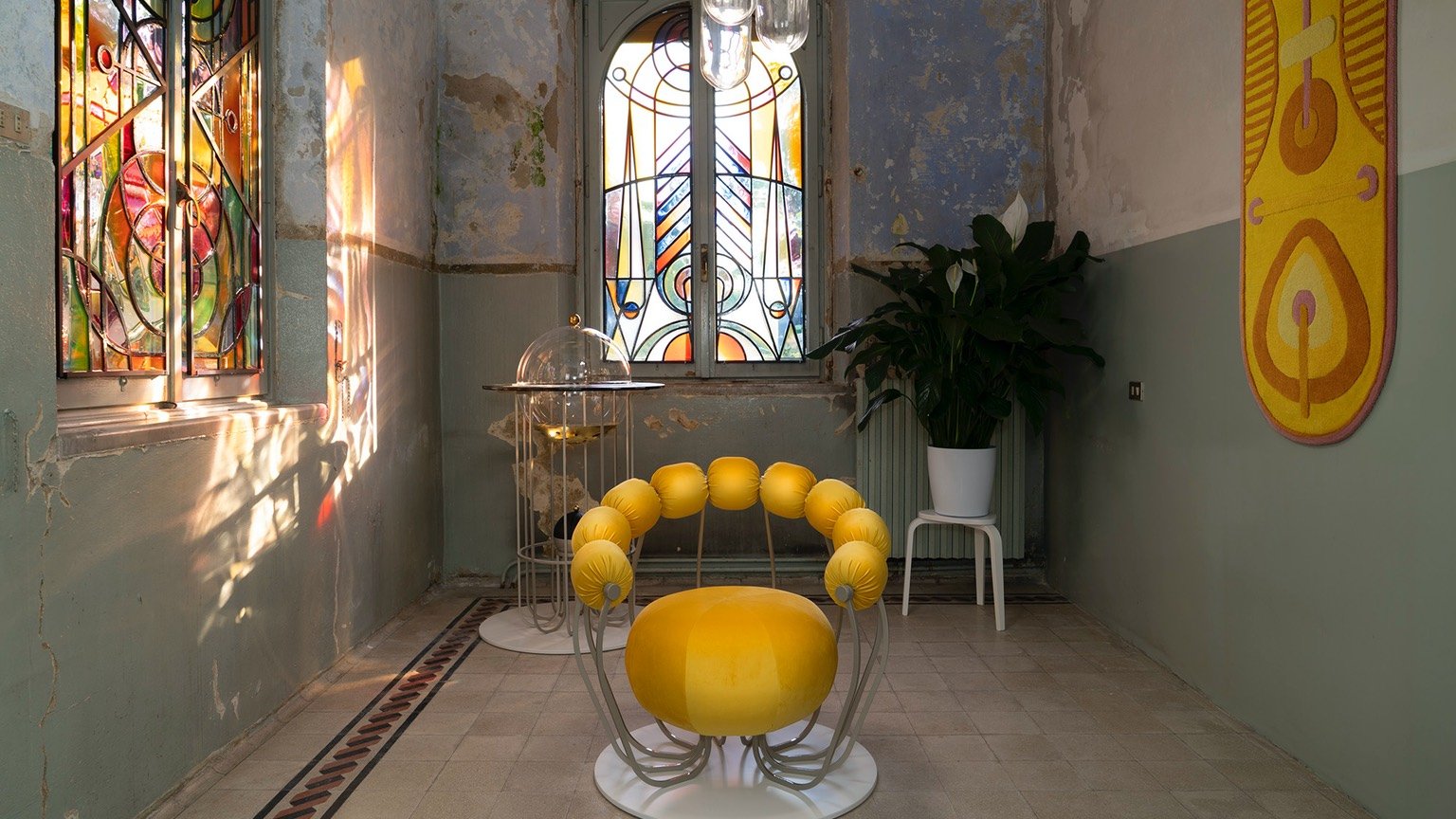 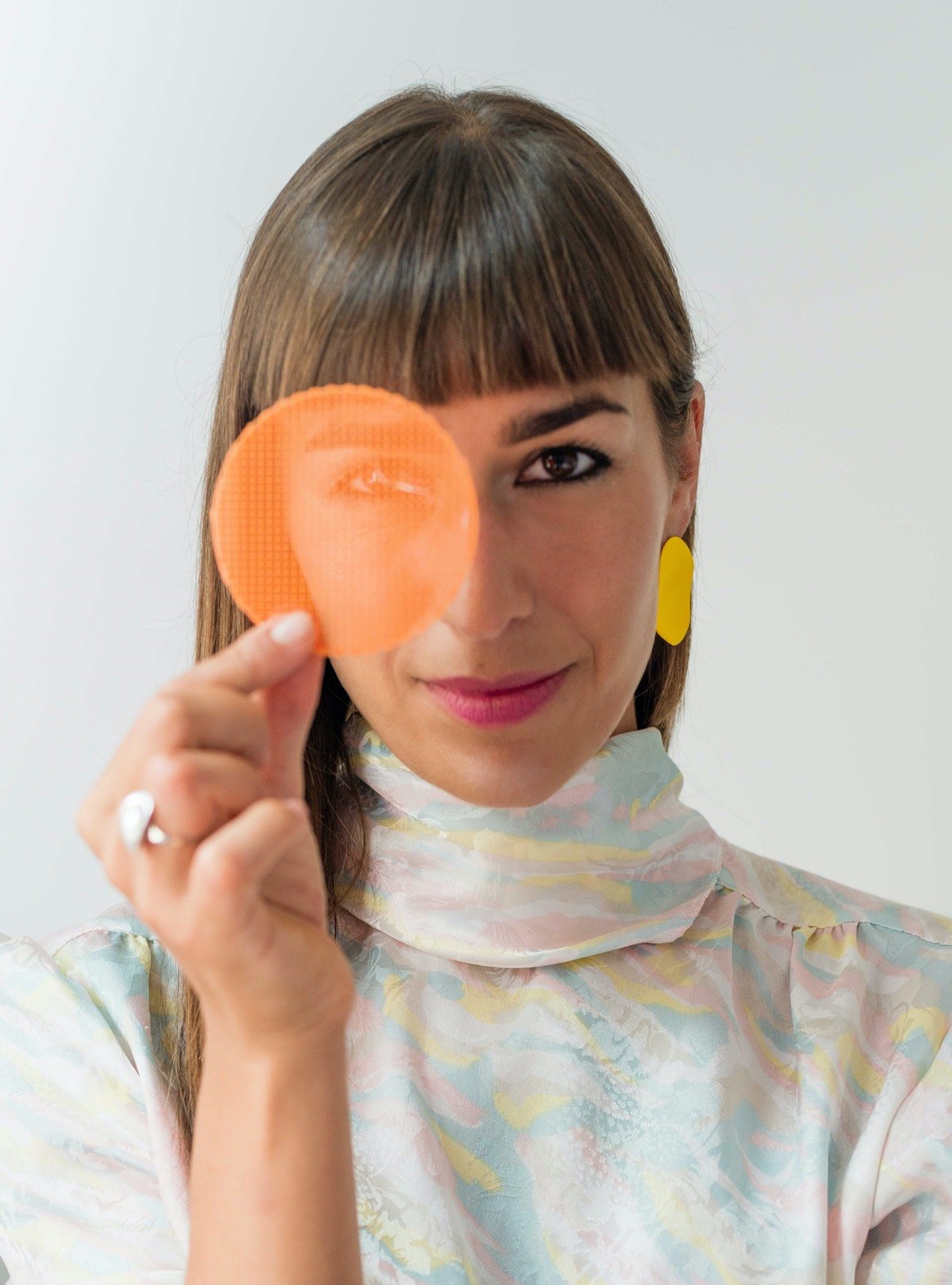 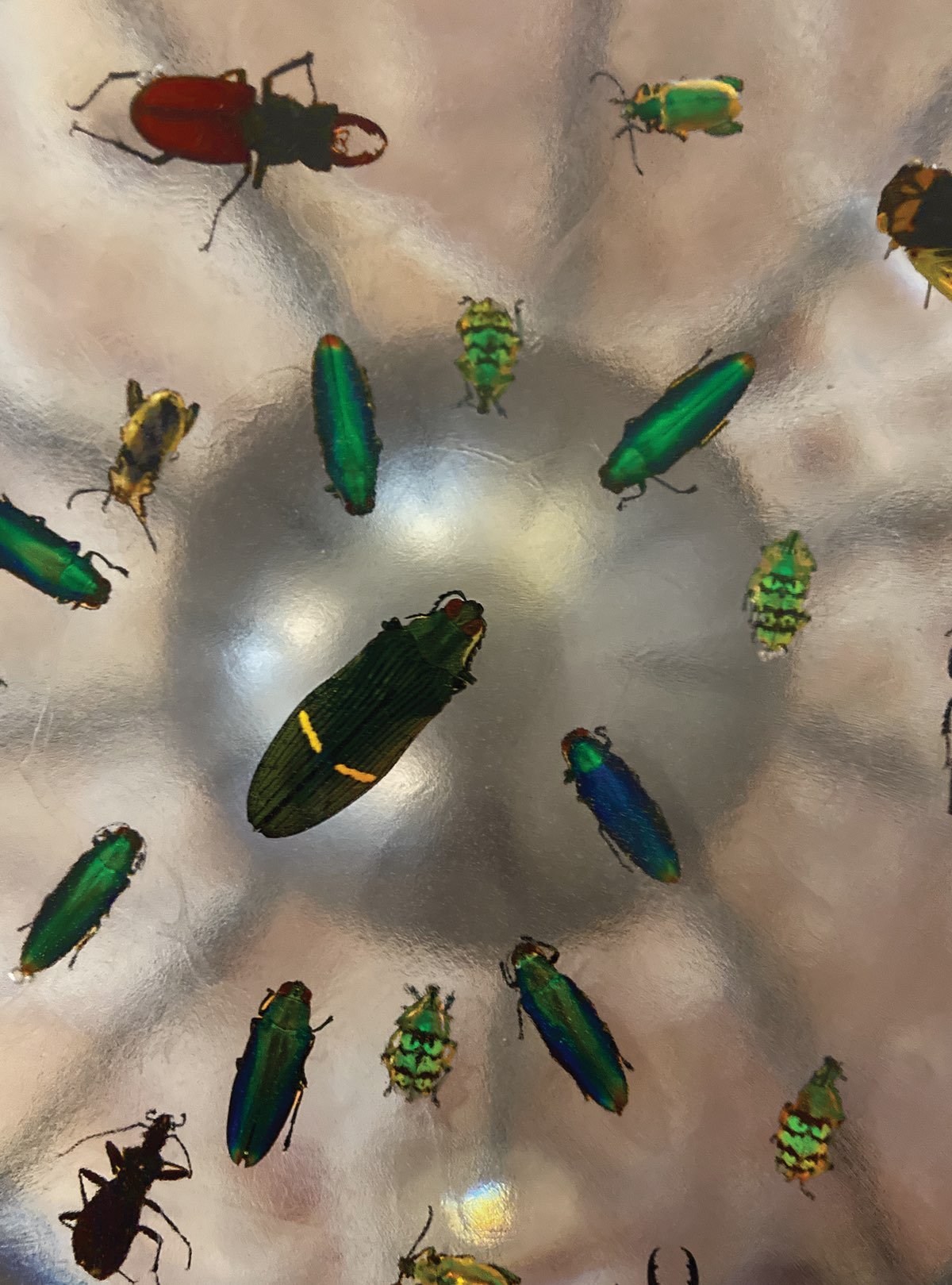 In conversation and in her work, Brooklyn designer Kickie Chudikova conjures a state of living wonder. “The beautiful Picasso bug inspired the rug, and the wavy wings of a dragonfly became the stained-glass windows,” she says, pointing to elements of her exhibition at Alcova during this year’s Milan Design Week. “And the armchair was such a thrill — it has nine metal pieces that connect into one, just like an insect’s body.” As for its brilliant yellow upholstery? “That’s because it’s the queen bee.” 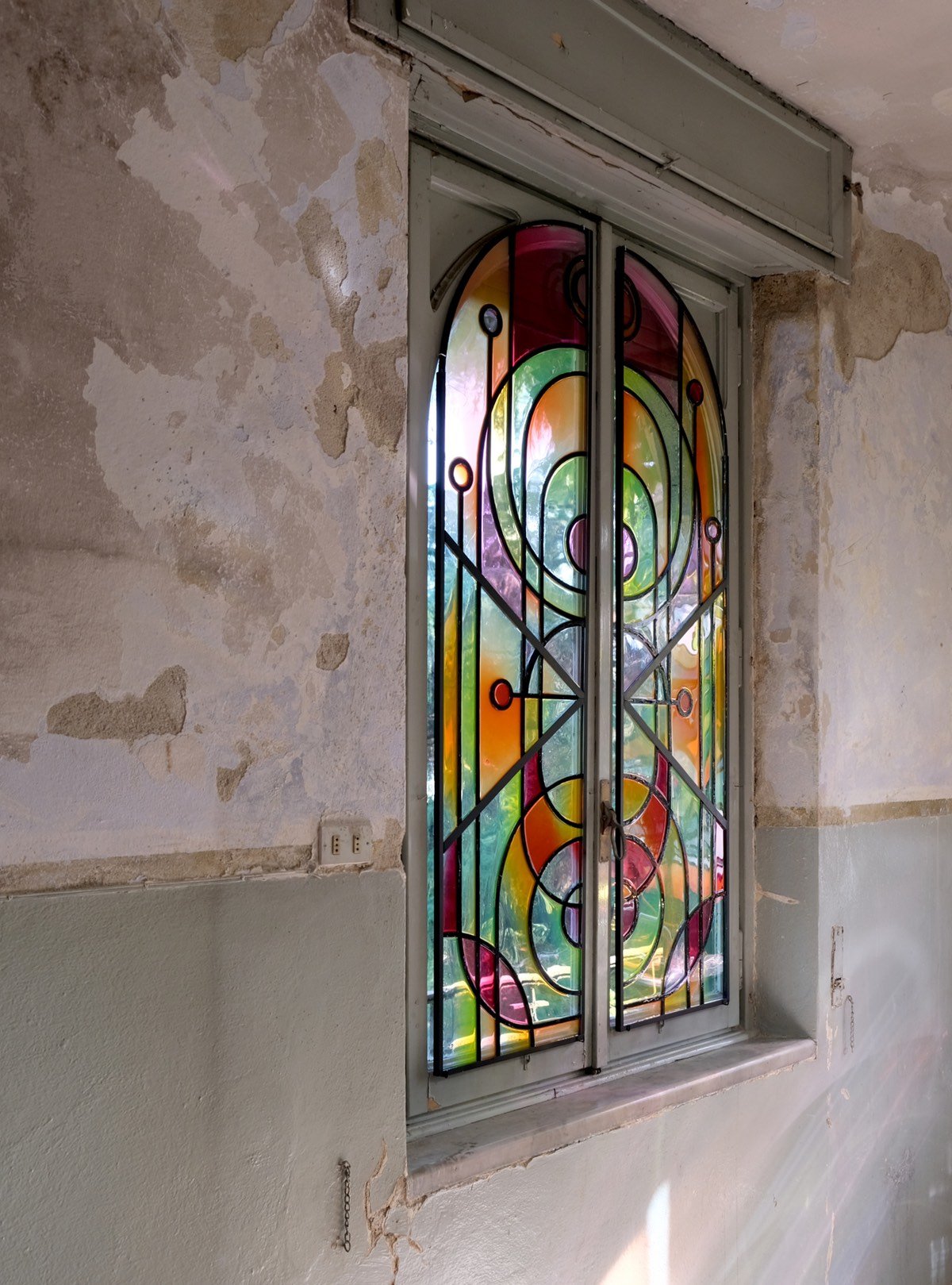 The six-piece collection also marked the debut of her showpiece armchair. Photos by Mattia Parodi

Comprising six limited-edition pieces, Chudikova’s Insectum collection captures the vivid colours and biological forms of the insect world, balancing a graceful, almost fragile allure with a sense of comfort and solidity. “It’s a celebration of beauty, but also a reminder to look at the vital yet endangered ecosystems beneath our feet,” she says. Insectum represents the designer’s first furniture collection since starting her own studio in 2020. (A graduate of the University of Applied Arts in Vienna, she previously worked as a senior designer for Karim Rashid.) Its intelligent layering of ideas — and hues — is signature Chudikova. 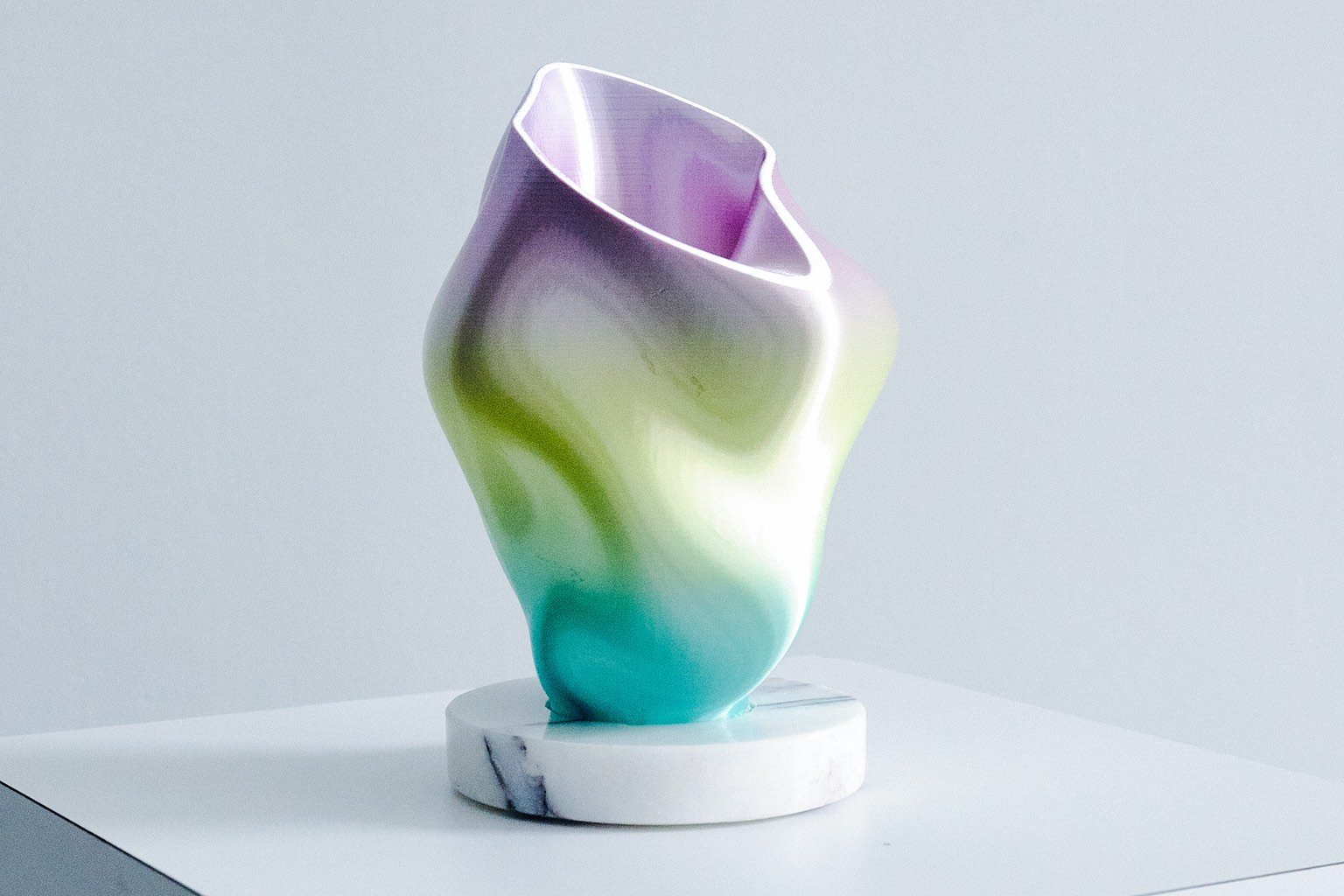 Debuted in 2021, the Ether vase features a 3D-printed thermoplastic top on a marble base. Photo by Aleko Syntelis

Consider the Ether vase, an amorphous 3D-printed design that captures rippling water’s fleeting glimmers of light and colour. Thanks to variations in the spool of rainbow filament used to fabricate the vase, each piece is defined by a unique gradient. 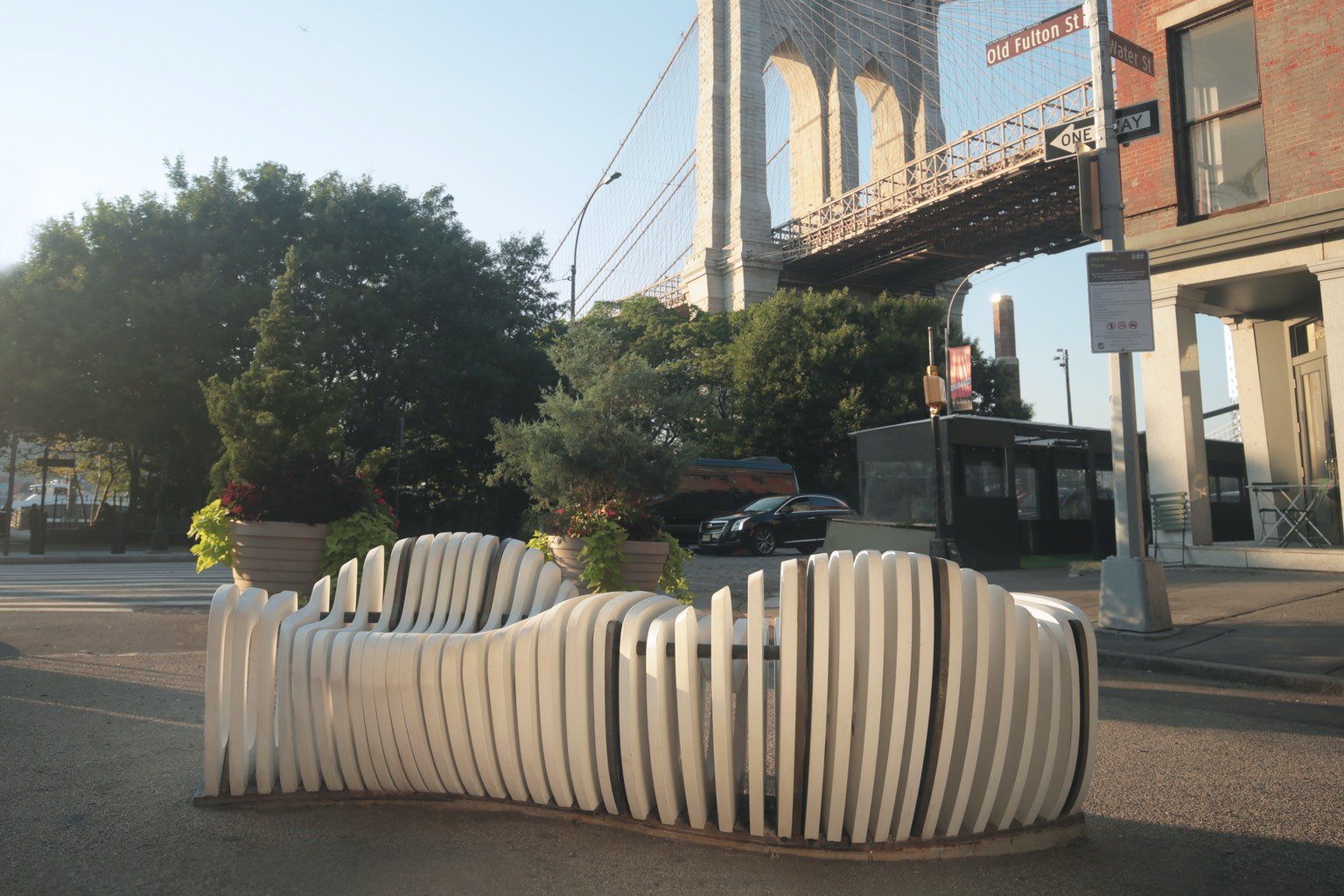 Chudikova’s thoughtful sensibility also extends to the realm of public furniture. Unveiled in Brooklyn this past September, the modular Spiral of Life bench invites passersby to sit together by the Hudson River, which also served as the design’s inspiration. Made from Caesarstone quartz and organized by NYCxDesign, the wavelike installation became an instant focal point. But Chudikova isn’t taking too much credit: “It’s right in front of a Shake Shack,” the designer explains, “so everybody sits there.” _STEFAN NOVAKOVIC 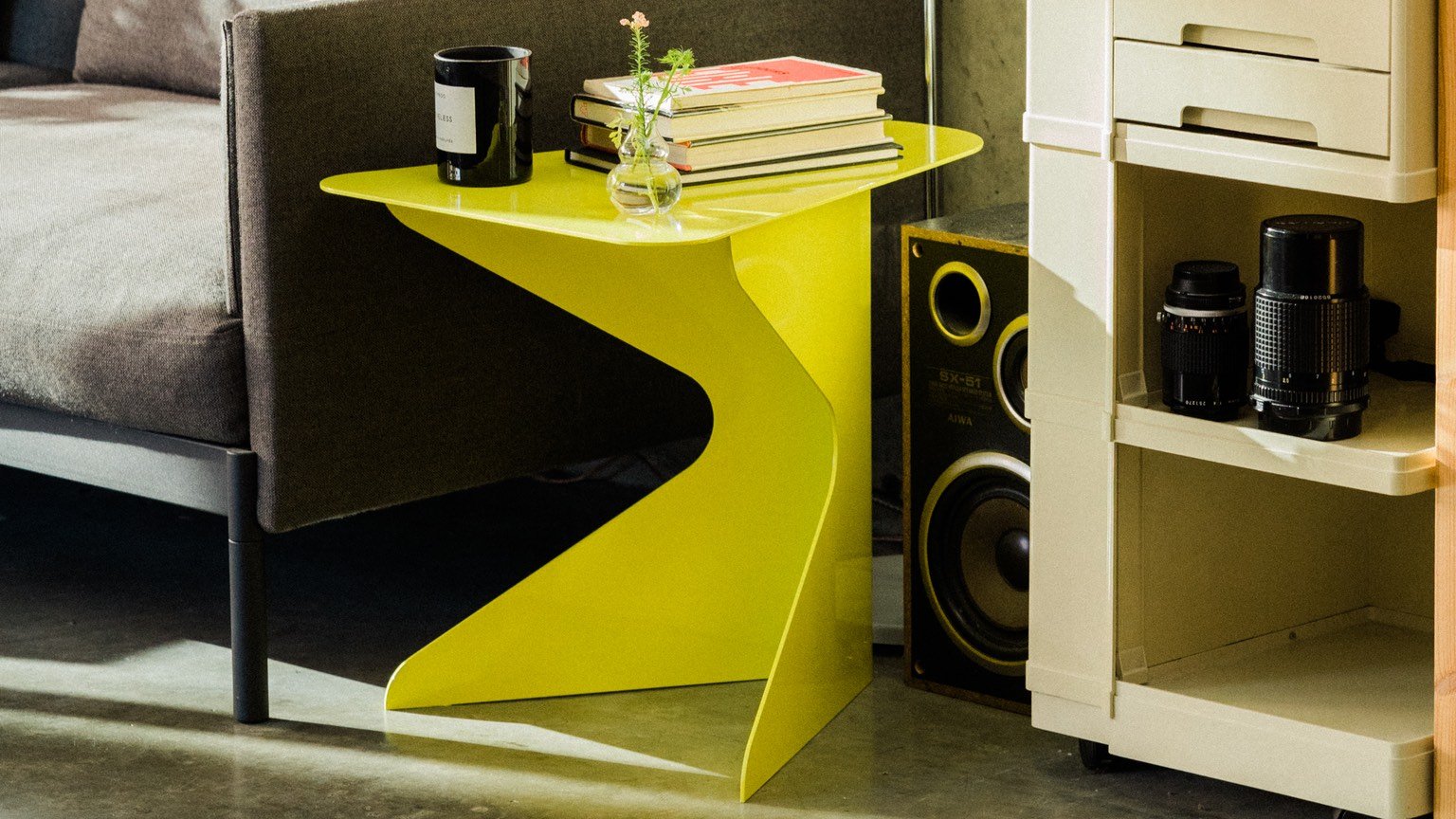 Photo by Guy Ferguson
THE INDUSTRIAL CRAFTSMAN
Merging traditional Nigerian materials with steel, Nifemi Marcus-Bello is on a mission to shape the future of contemporary African design 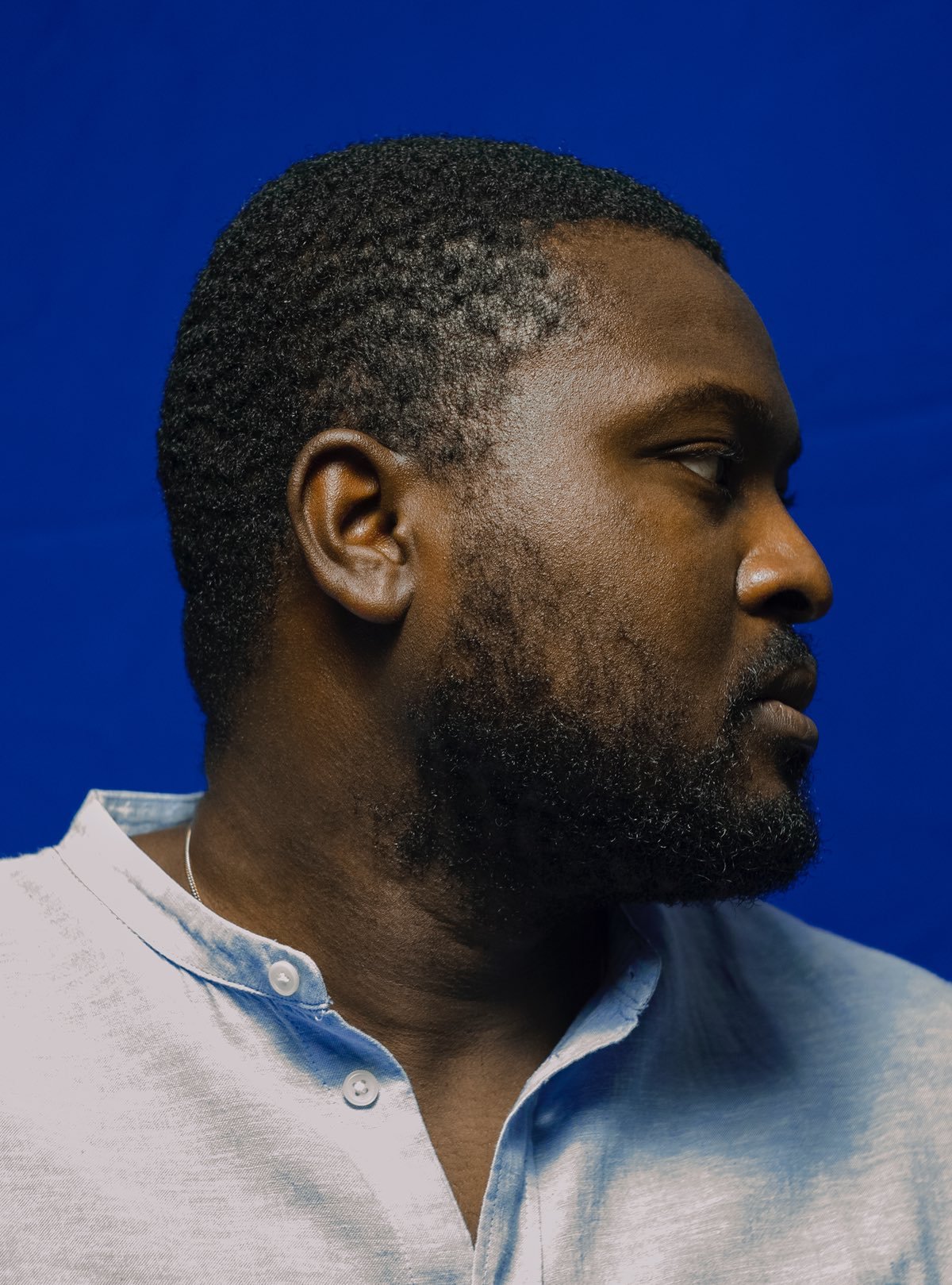 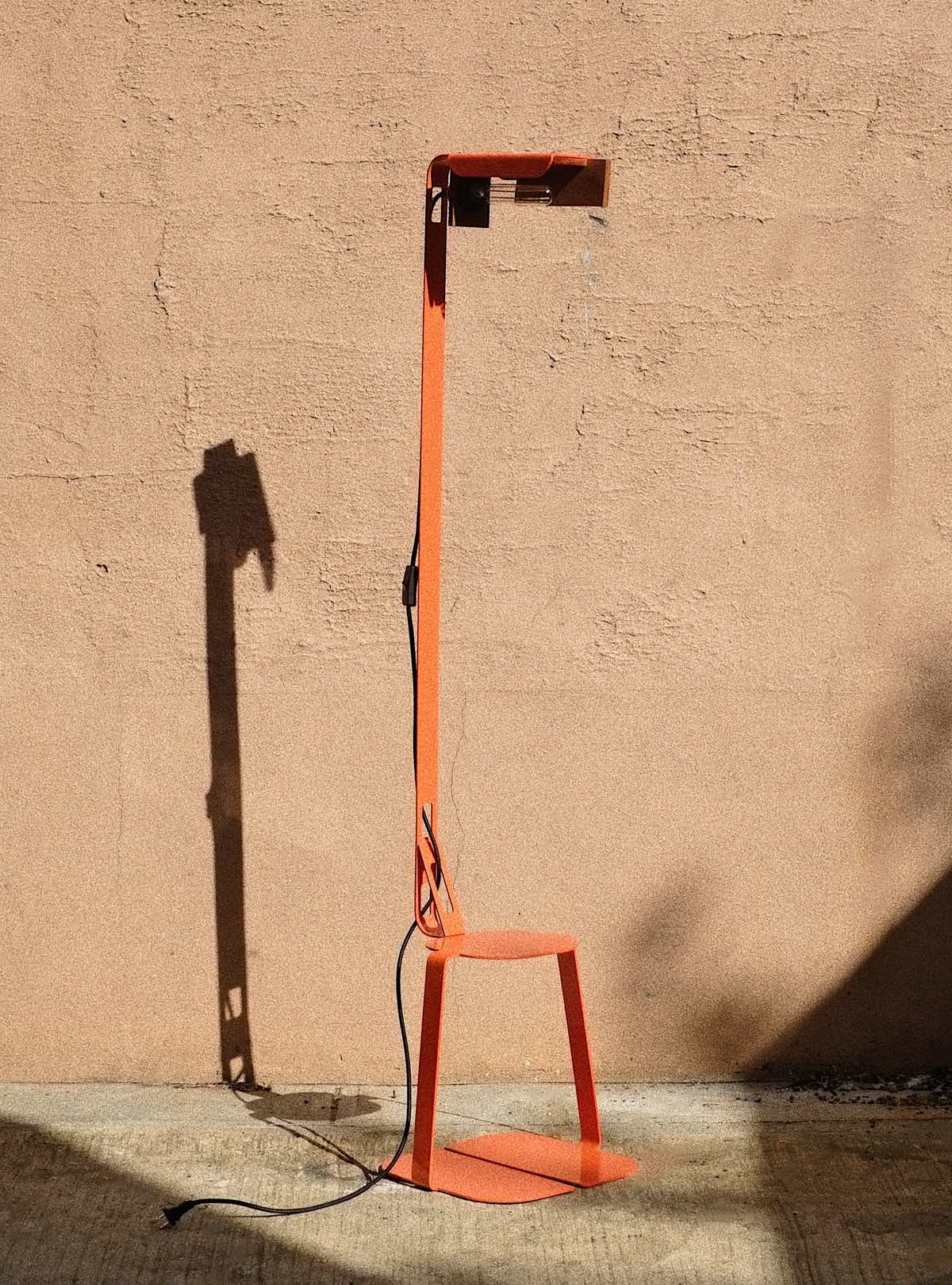 When Lagos-based designer Nifemi Marcus-Bello first approached Queens design shop Lichen, it was clear he had found the right stockist. While the owners initially placed an order for a small batch of his Selah lamps, Marcus-Bello also sent along three sculptural LM stools to test the market. An instant hit, they sold out within the hour. 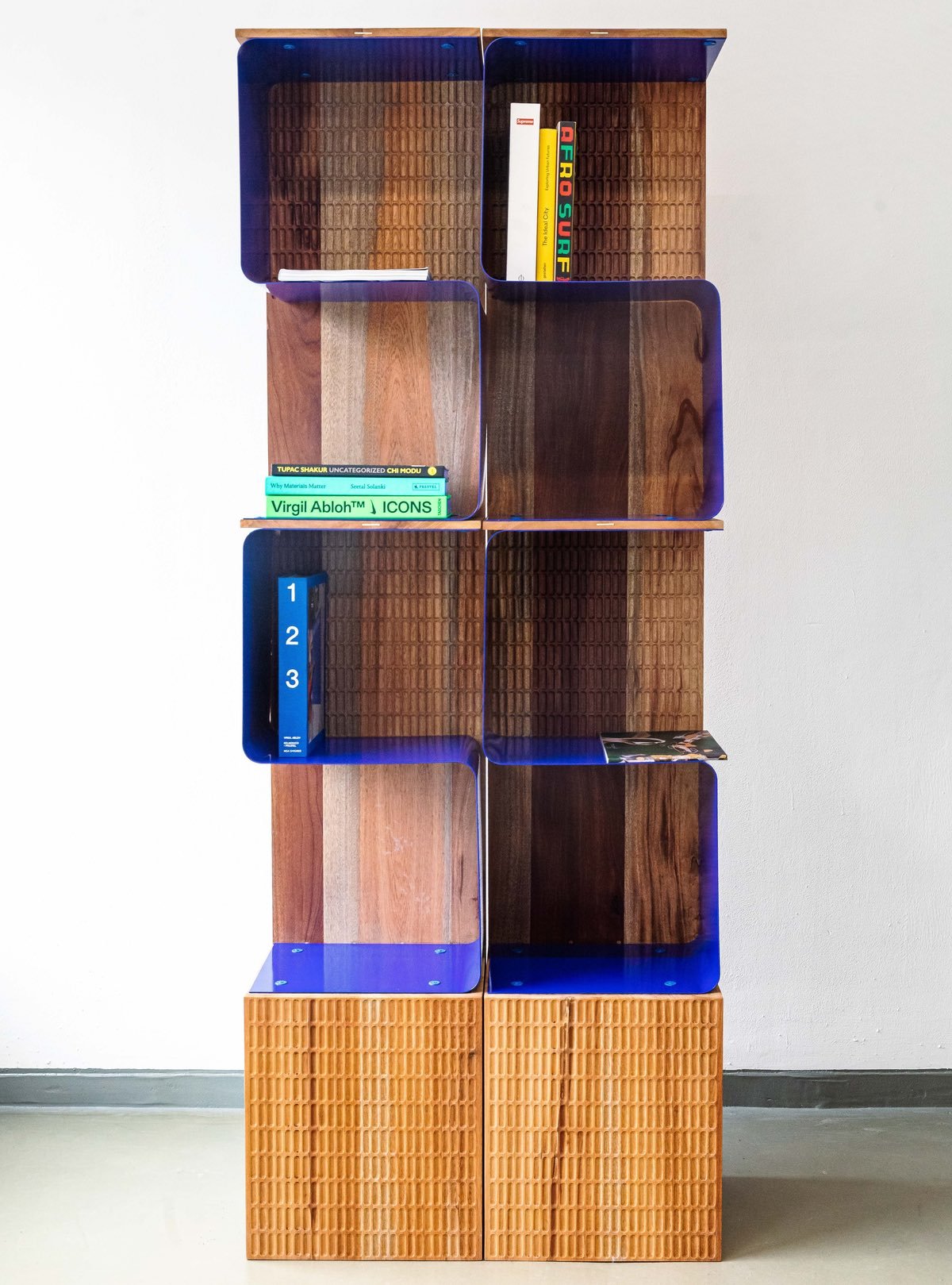 The M2 shelf is a juxtaposition of hard steel and soft African mahogany. 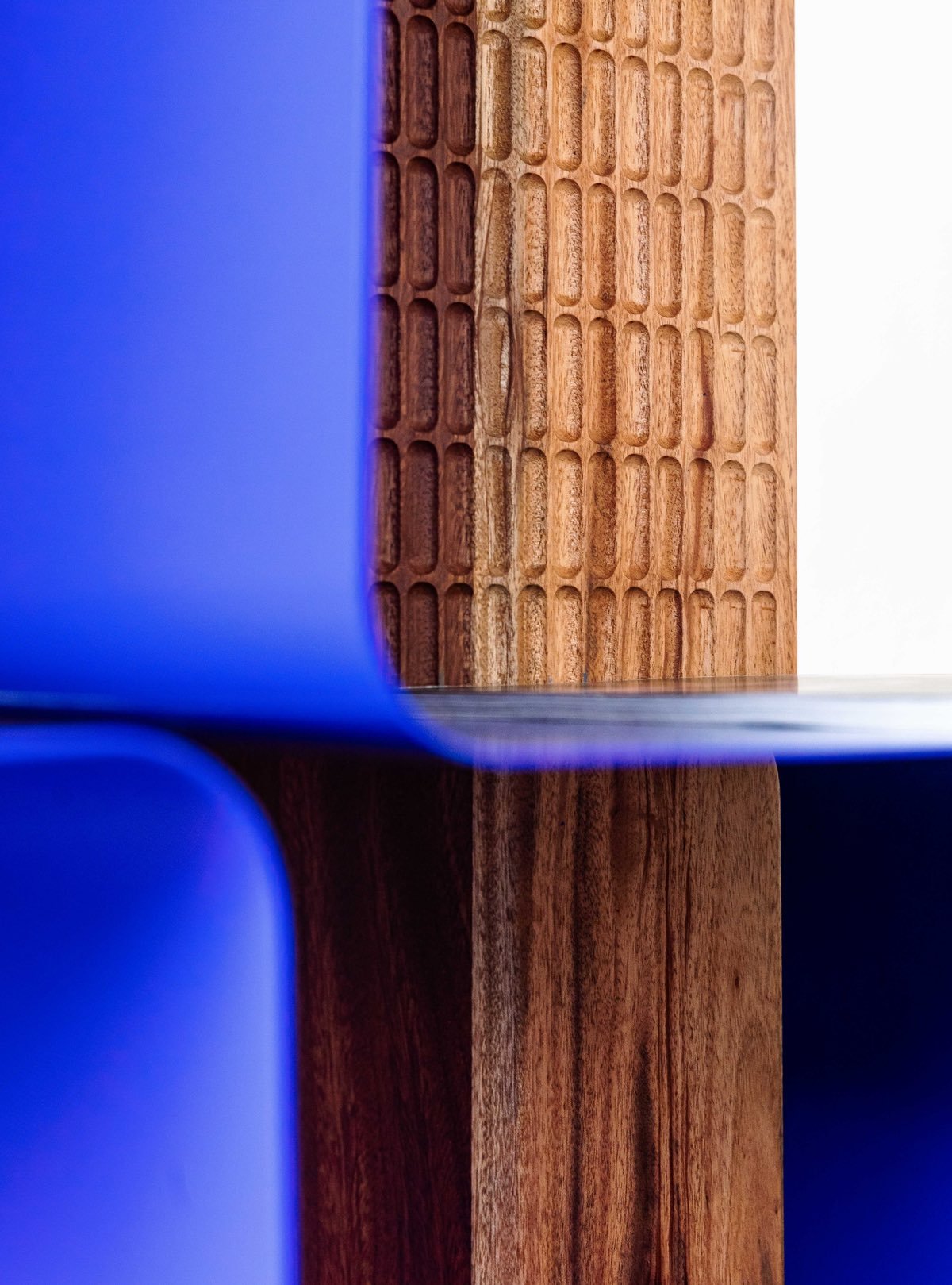 It is inspired by a 19th-century wooden Igbo sculpture. Photos by Jide Ayeni.

After working trade apprenticeships in Lagos as a teen, Marcus-Bello went on to study product design at the University of Leeds. Now, he balances a regard for the cultural context of his homeland — including traditional materials like African mahogany, used in his recent M2 shelf design — with an appreciation of the new technologies and manufacturing possibilities afforded by globalization. 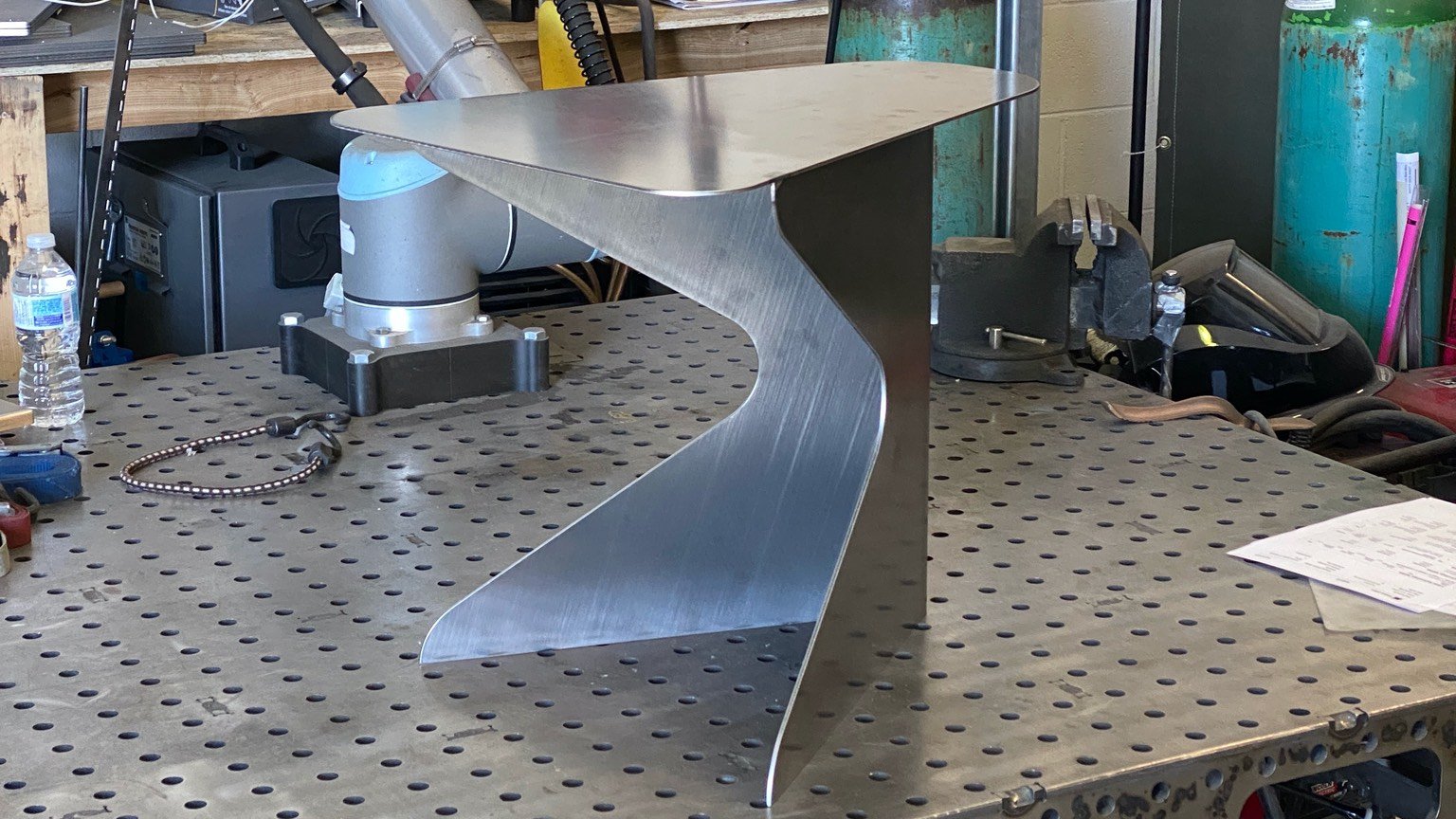 The LM stool’s minimal form was designed to push the structural capabilities of sheet metal construction.

Take the LM stool, for instance. Its abstract form reflects its main manufacturer: a factory in Lagos that agreed to produce it only so long as it didn’t require alterations to the assembly line, which typically churns out sheet metal casings for electrical power generators. But in May, Canadian brand Part & Whole reached out to produce a special edition of the LM stool in Victoria, BC, which launched during NYCxDesign. For Marcus-Bello, the collaboration spoke to his global ambitions. “A European designer can produce in China and their product is still European,” he says. “But there’s a stigma that African designers have to always produce in Africa to be seen as African designers.” 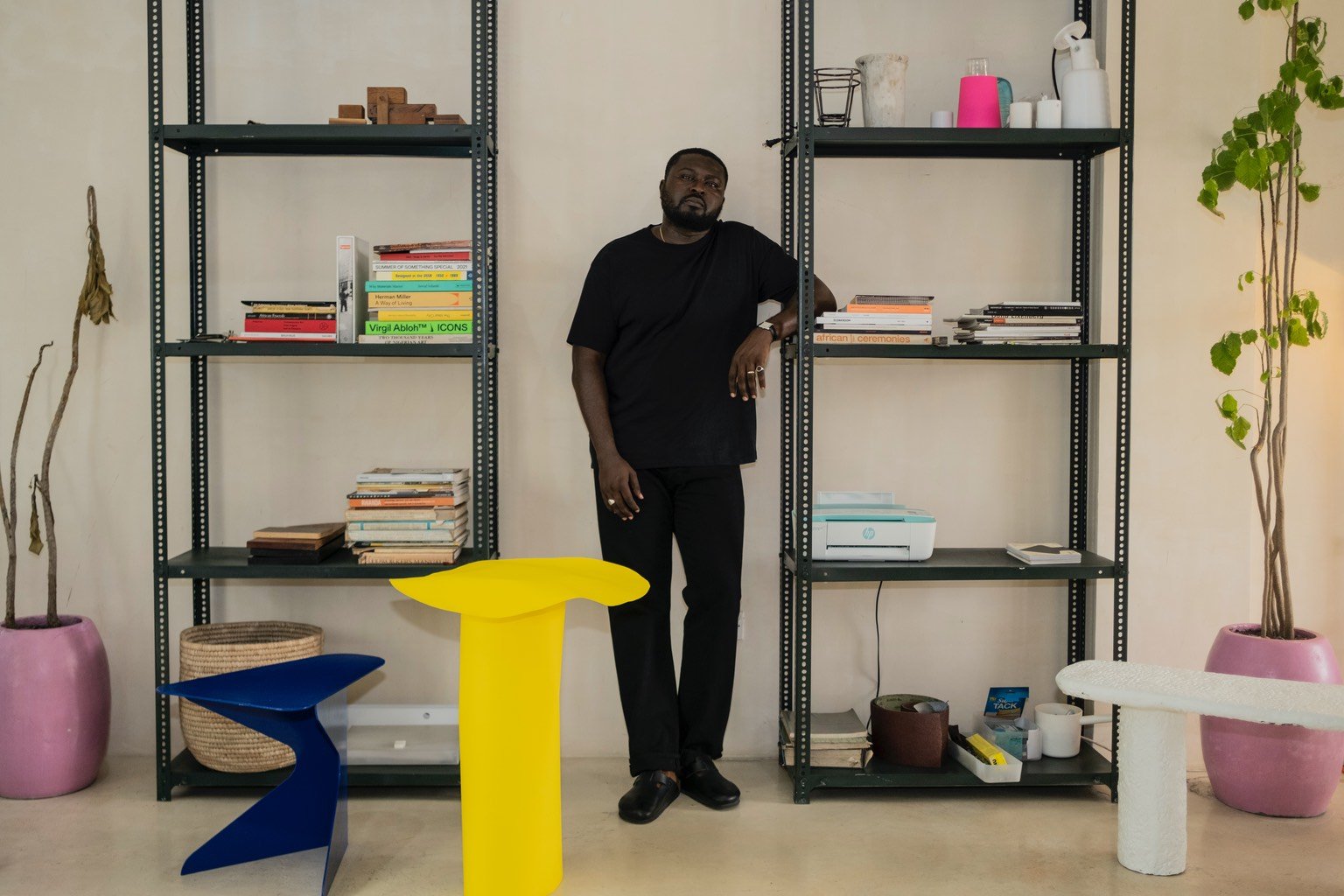 Continuing its world tour, the LM stool travelled to London this fall as part of Yinka Ilori’s exhibition at the Design Museum. Marcus-Bello has also kick-started a research project, Africa — A Designer’s Utopia, which explores anonymously produced objects. “I want to show people that good design exists here — even if it doesn’t have the design label on it,” he says. _SYDNEY SHILLING

After taking the world by storm this year, new furniture designers Dean Norton, Kickie Chudikova and Nifemi Marcus-Bello are officially a trio to watch.