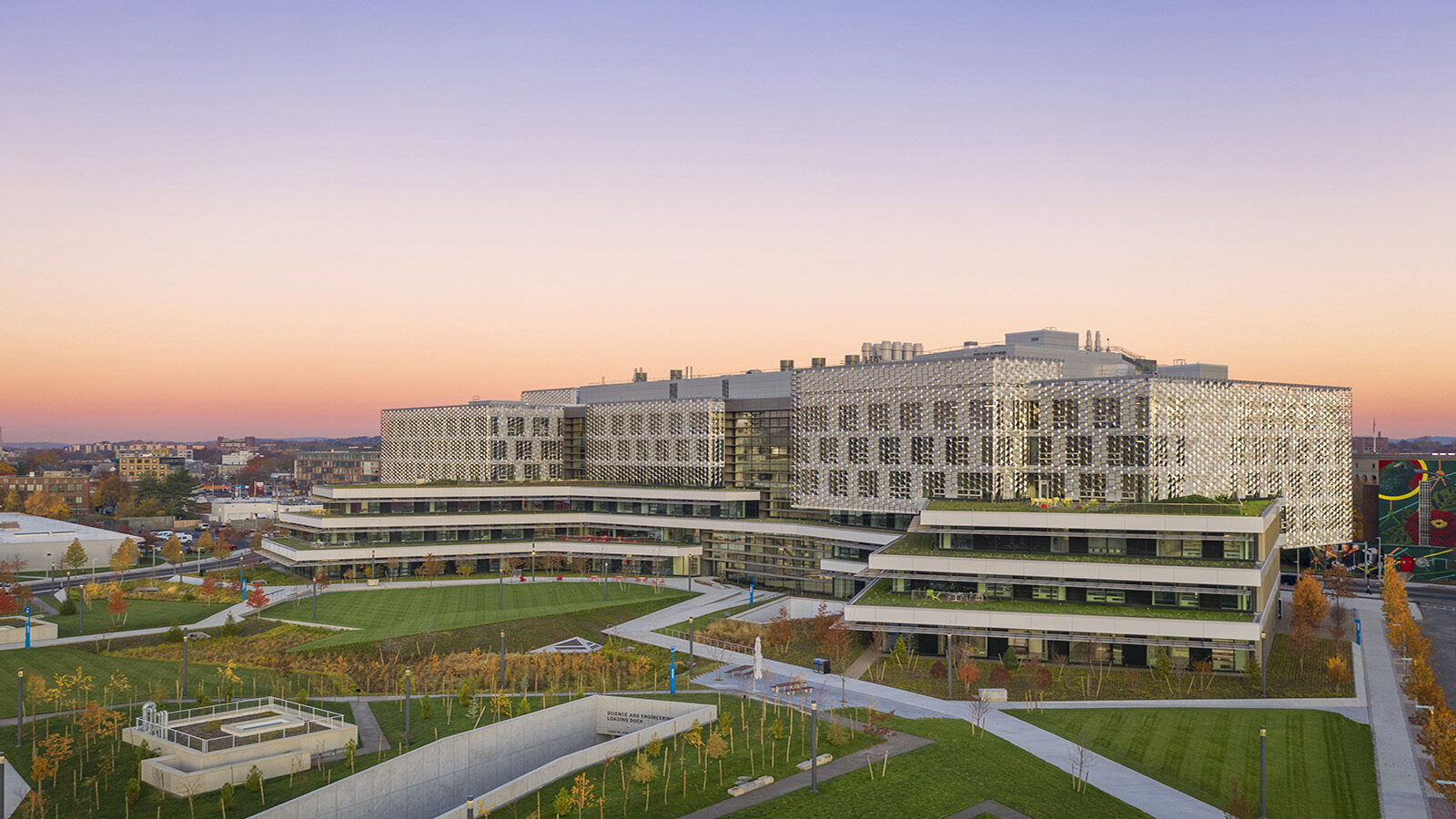 The new Science and Engineering Complex by Behnisch Architekten is part of the first completed phase of Harvard’s upcoming Allston campus.

On the edge of the Charles river, a new campus is set to rise in Boston’s Allston neighbourhood. Headed by Harvard University, the mega-project will include an “innovation” district, a non-academic commercial campus housing multiple research-centred establishments. Recently completed, the Science and Engineering Complex (SEC) by Behnisch Architekten signals the first step in the new district’s emergence. 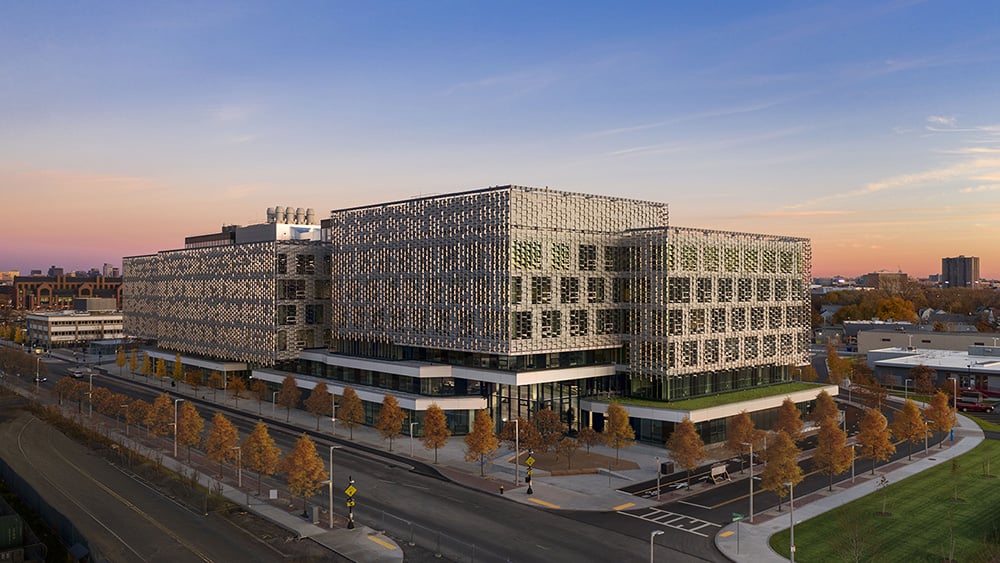 Harvard has owned land in Boston’s Allston neighbourhood since 2000 — more real estate in fact, than in the adjacent municipality of Cambridge, where the university makes its home. These 341 acres of undeveloped land are set to include a renovated Harvard Business School, a conference centre and updated student housing, among other developments. 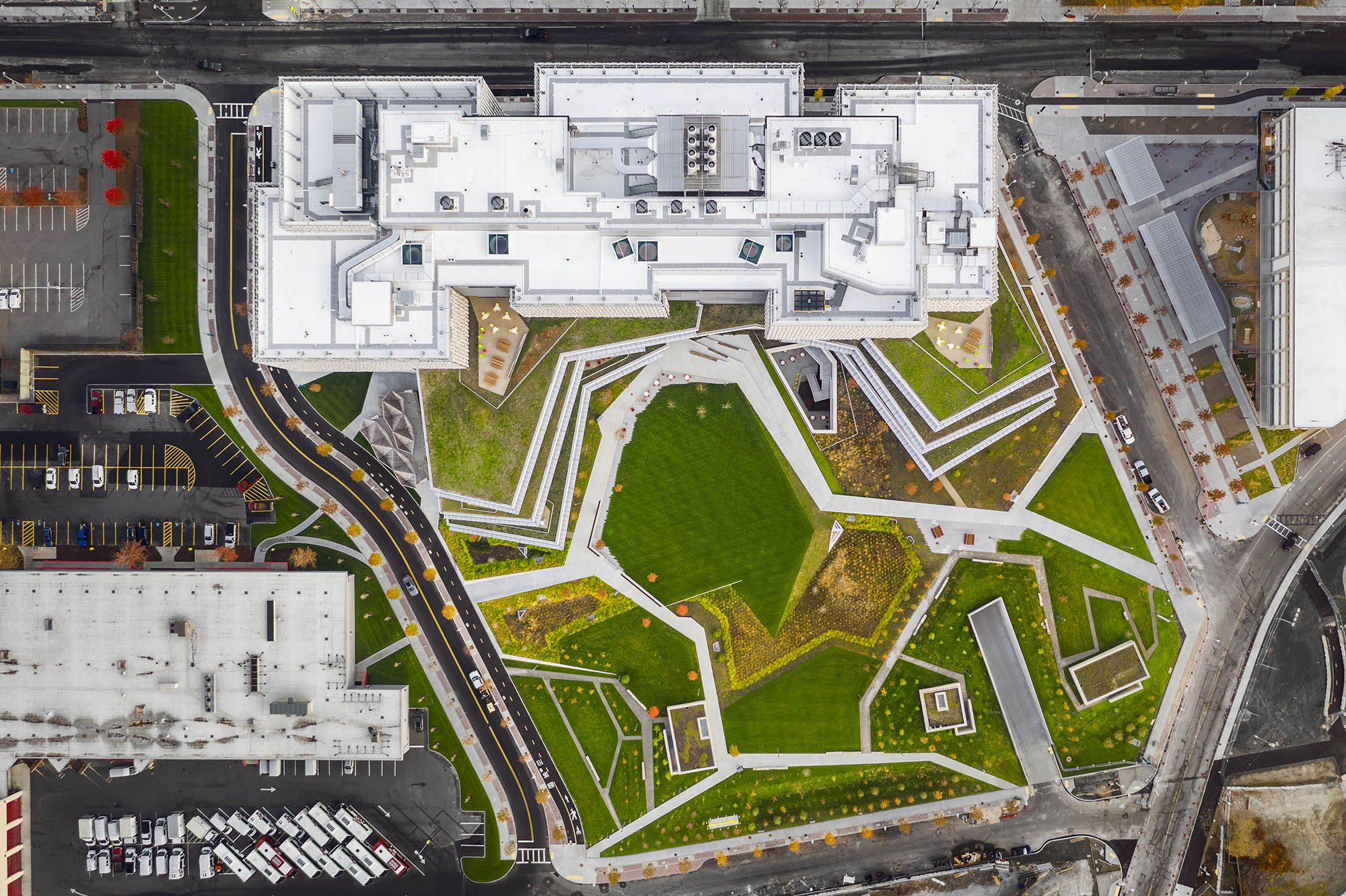 In 2006, German firm Behnisch Architekten was selected to spearhead the district’s first phase — the Science and Engineering Complex. Measuring over 50,000 square metres, the building is Harvard’s largest development in over a century. Three four-story volumes make up the building, which is set to see up to 1,000 undergraduate students cycling through it on a daily basis, in addition to researchers and scientists. According to Stefan Behnisch, the “highly specialized nature of the research spaces […] presented a significant challenge during the design phase in terms of assuring high levels of vibration, EMI, temperature and humidity control.” 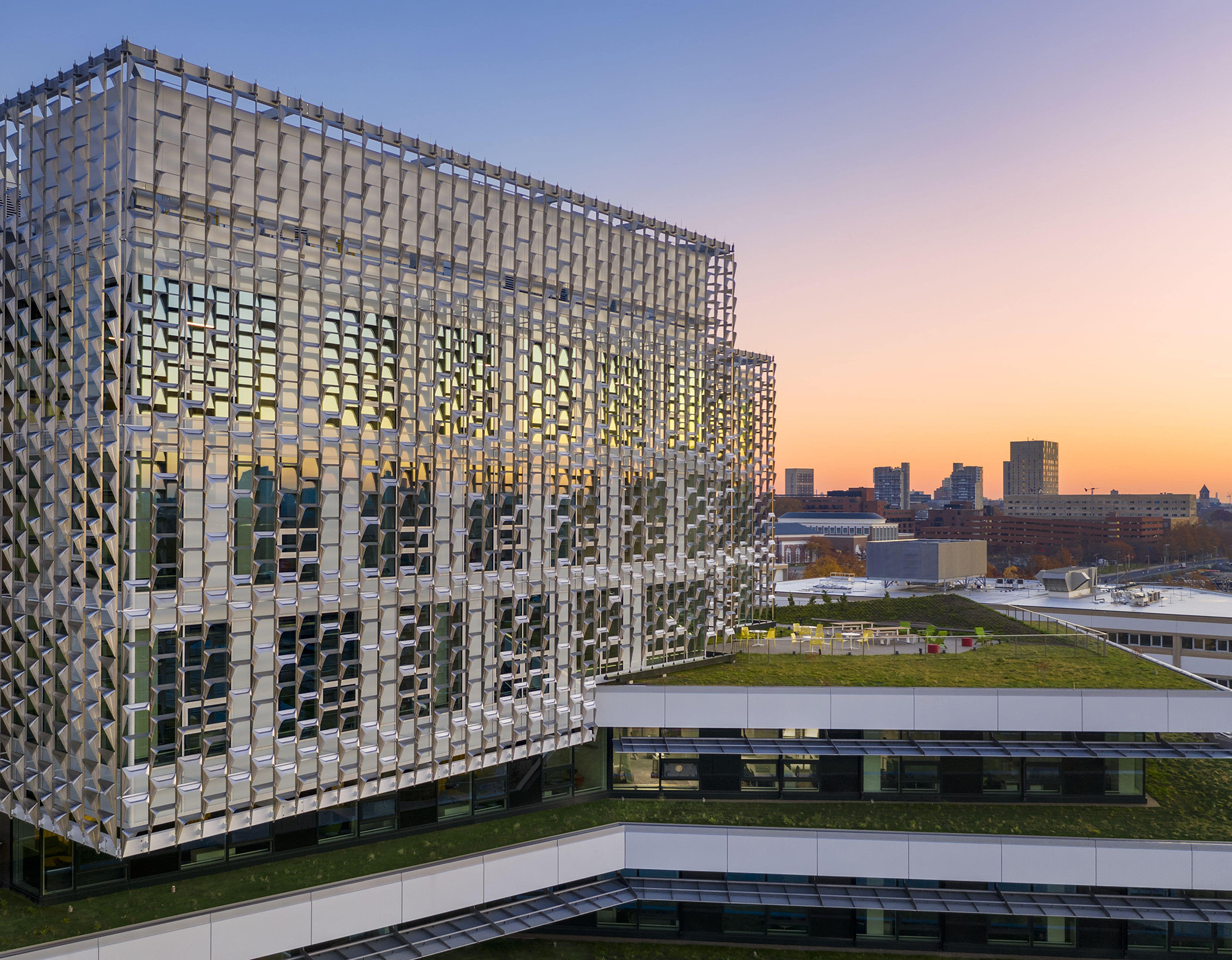 From the beginning, the firm’s first priority was to showcase Harvard’s commitment to sustainability through thorough and thoughtful design. According to Behnisch, the SEC was to “set the tone for architectural quality, sustainable performance and approach to public space for all future developments. […] This project was expected to set the bar very high.” 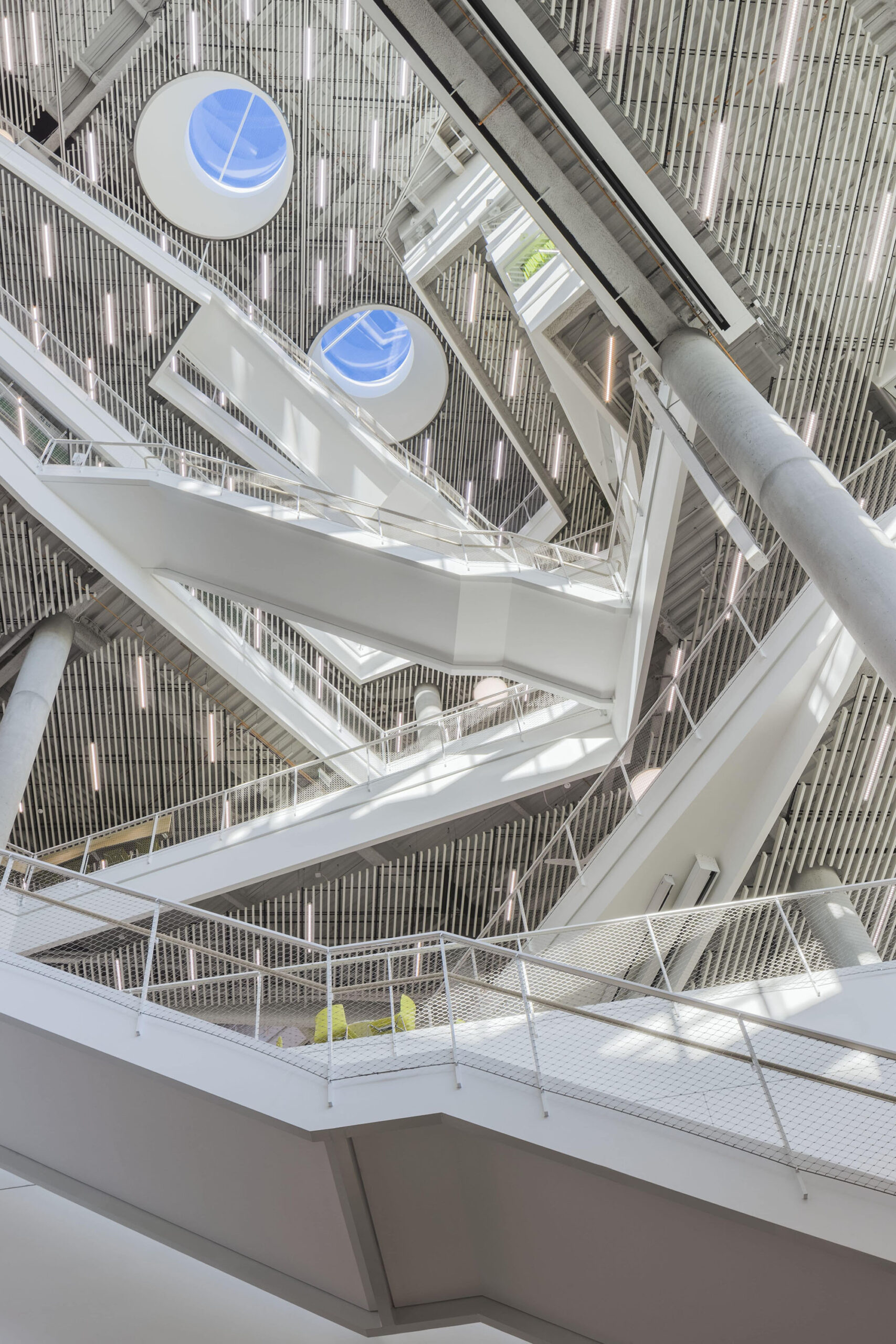 And so it did. The building’s interior is bright and airy, interspersed with pops of neon colour across the furniture, textiles and walls. In the central atrium, large skylights infuse the expansive space with natural light, beaming across the zig-zagging staircases that lead up to research labs. Lower volumes with glazed façade sections also feature sun shades and operable windows — classrooms, makers paces and amenity rooms make up the floors closer to street-level. 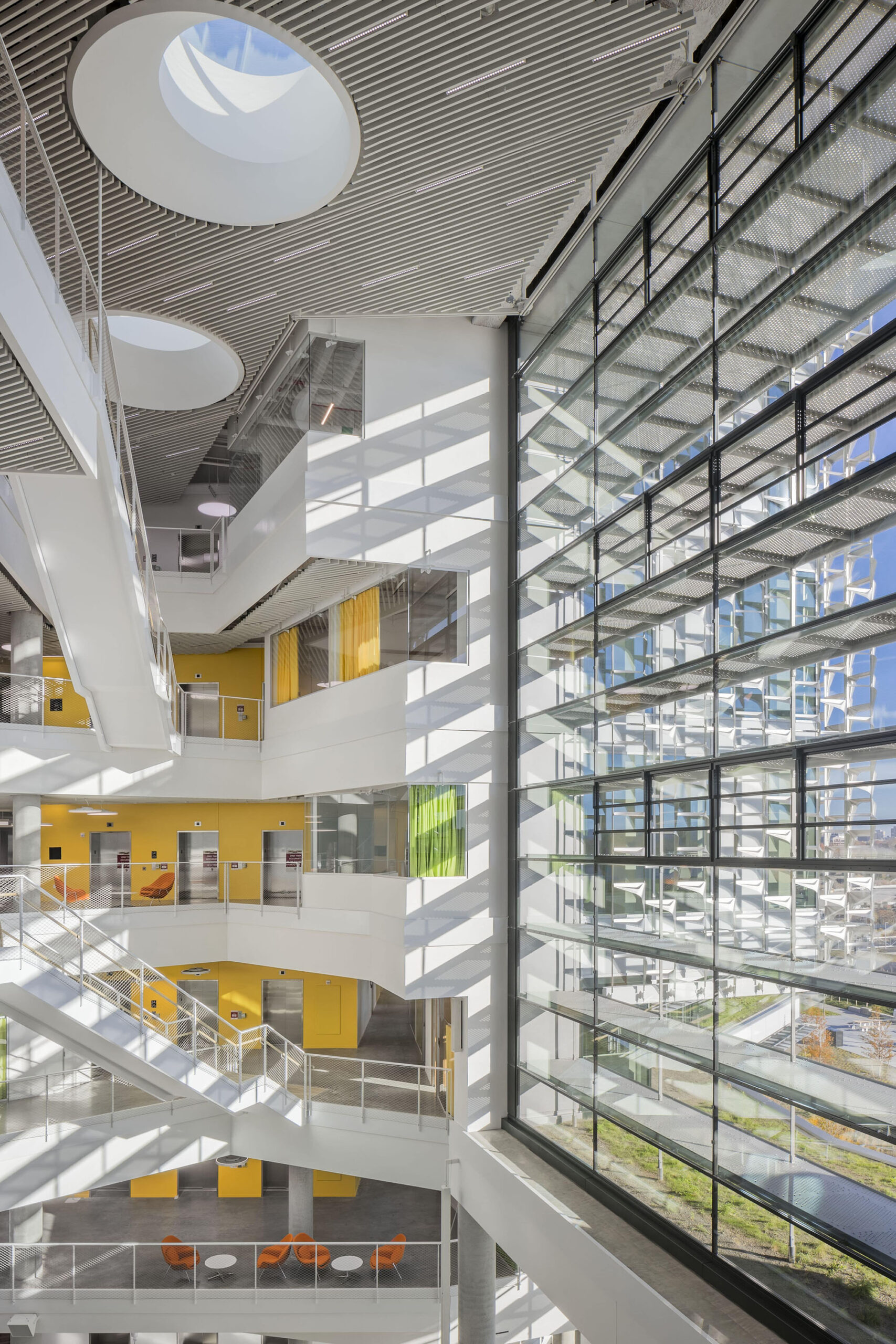 Built for both cutting-edge research and undergraduate teaching, the SEC’s design solutions had to accommodate evolving research methods as well as different modes of learning. To this end, classrooms and meeting spaces vary in size and layout, and can adapt to multiple configurations — from sloped amphitheatre seating to flexible desk arrangements.  Glass-enclosed study spaces are interspersed throughout the building, providing private meeting rooms without interrupting the space’s visual flow. 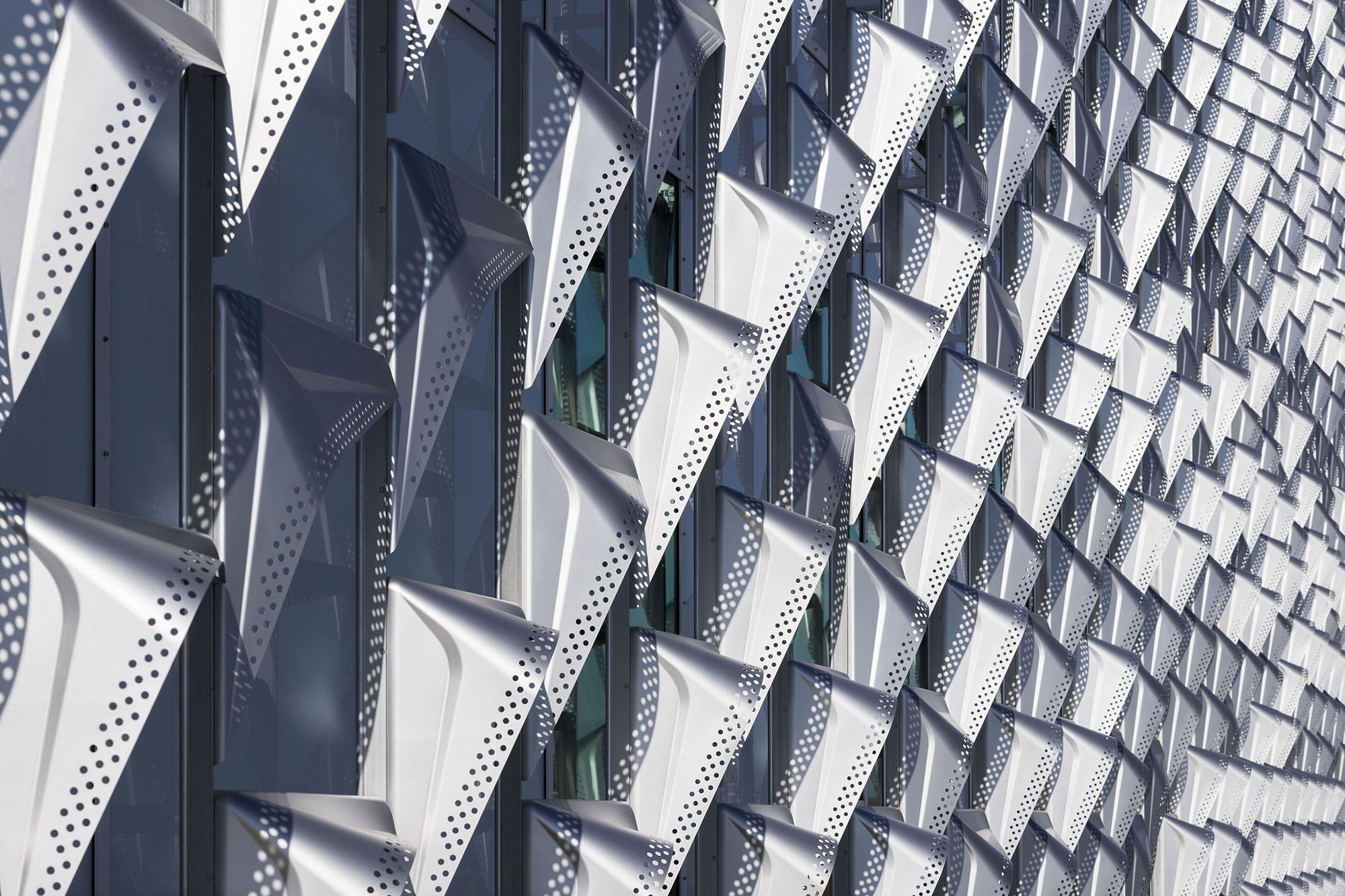 Across the upper volumes, an intricate façade treatment of stainless-steel mesh shades gives protection from the harsh summer sun, while welcoming heat in the winter. As Behnisch explains, “the specific geometries of the individual shading elements are configured according to the varying angles of the sun given each exposure (north, east, south, west) and the particular time of year.” The shades are each positioned at a specific angle to block the sun’s rays — but also to “reflect daylight off of their reflective top surfaces deeply into the building interior.” This passive technique significantly reduces the cooling load on the building’s systems. 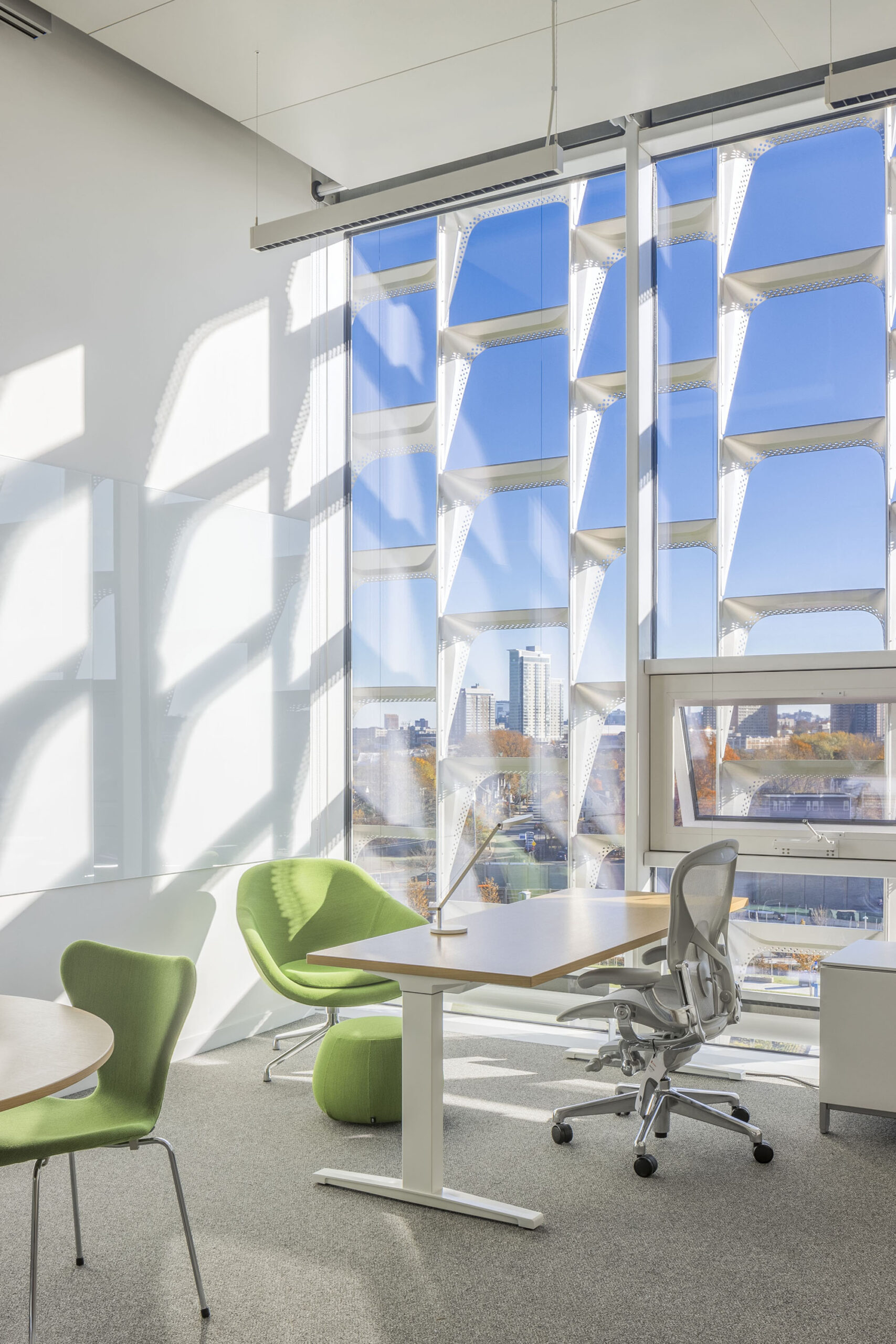 Integrated cisterns save on water consumption by collecting and storing rainwater for future use. Roof terraces replete with vegetation also encourage gatherings of students and faculty in a soothing environment, with views of the city. 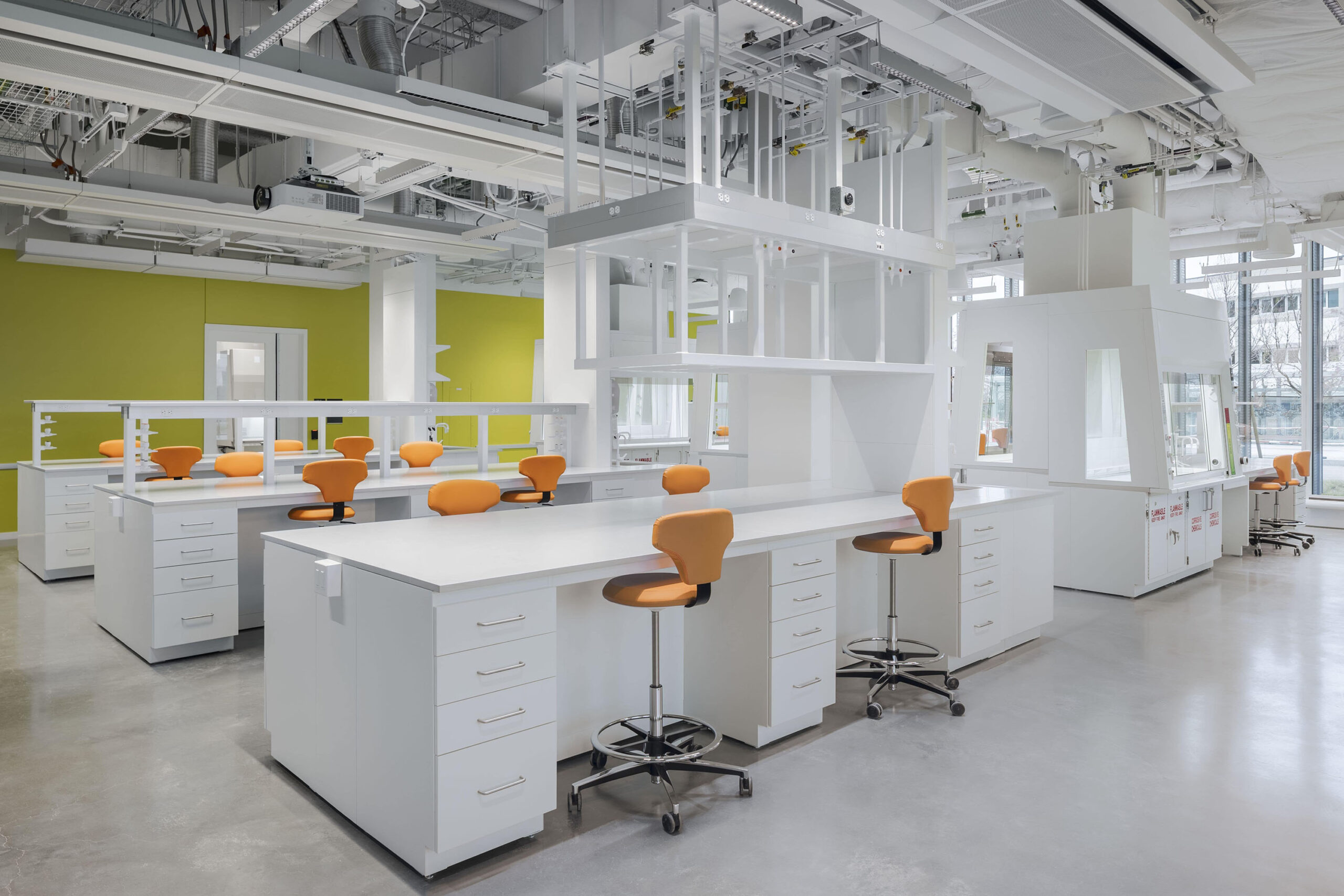 The new Science and Engineering Complex by Behnisch Architekten is part of the first completed phase of Harvard’s upcoming Allston campus.