Hassell’s New Health-Based Office for Medibank
The HQ for Australia's largest private health insurer is designed to get employees out of their seats and walking. 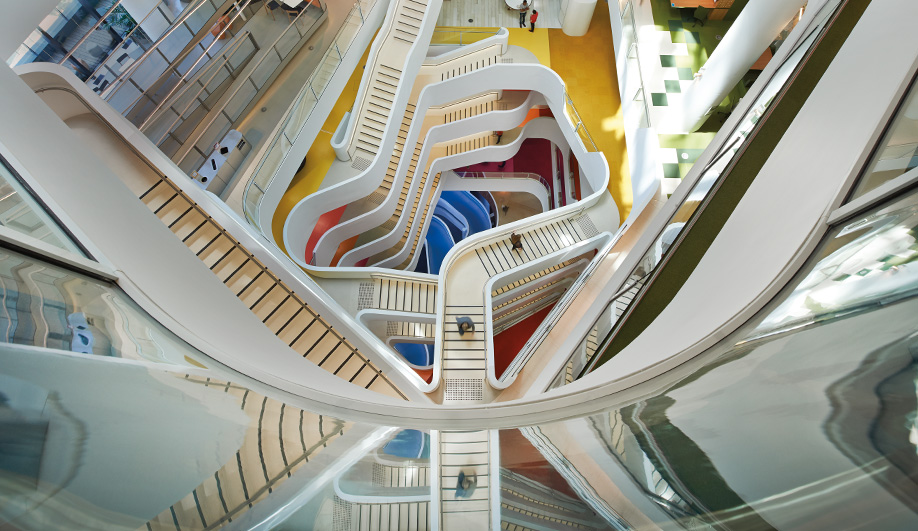 The HQ for Australia’s largest private health insurer is designed to get employees out of their seats and walking.

Medibank is Australia’s largest private health insurer, and last August it opened its new head office in Melbourne, in a building that neighbours such landmarks as Etihad Stadium, home to the Australian Football League, and Southern Cross railway station. Located in the Docklands, the country’s largest urban renewal development, the black and white-clad building has quickly become a beacon for what could be the healthiest work environment on the planet. 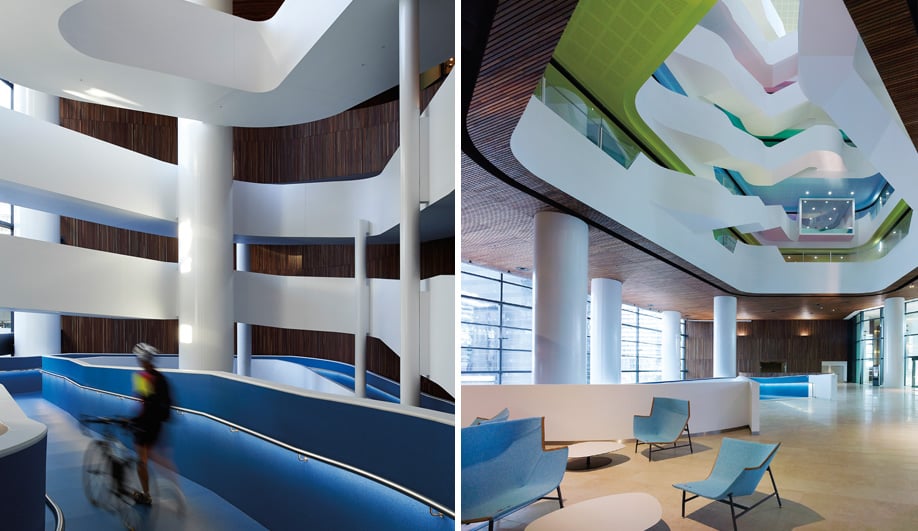 Left: A ribbon-like blue ramp traverses four levels and invites employees to bring their bikes into the building’s storage facility. Right: The atrium’s spiral of colour-coded ceilings and floors are an effective wayfinding feature for navigating the seven floors where 1,600 employees now work.

Hassell, the international design practice behind the new office (and this temporary installation focused on sleep wellness), calls the interior landscape a health-based working environment, or HBW, and it is a clear departure from the more familiar activity-based working phenomenon that has permeated so many workplaces, where foosball tables and tube slides are the norm. 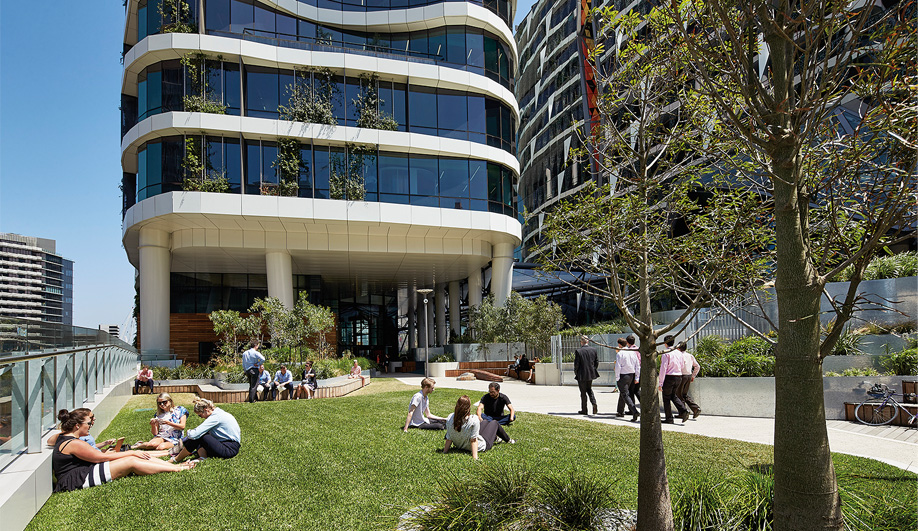 Approximately 520 climbing and bedding plants, mostly native, are incorporated into the facade and cover 10 per cent of the building. Grassy areas above street level are ideal for taking midday breaks.

Health-based working puts the emphasis on the well-being of the building’s occupants, and one of the primary goals is to encourage employees to move continually throughout the day. At Medibank Place, the central atrium, which rises the full height of the 16-storey building, is the most evident feature that encourages walking versus taking the elevator. Various circulation paths, including one extensive ramp and 17 stairways, snake in all directions.

It’s a spectacular and inviting sight, a bit reminiscent of a bustling termite mound. Upbeat colours that demarcate floors and ceilings are combined with the fluid forms of curving white walls that appear to recede into the distance. Even cycling is encouraged. The ramp, located near the main entrance, spir­als upward from the street, allowing employees access to a bike storage area en route. 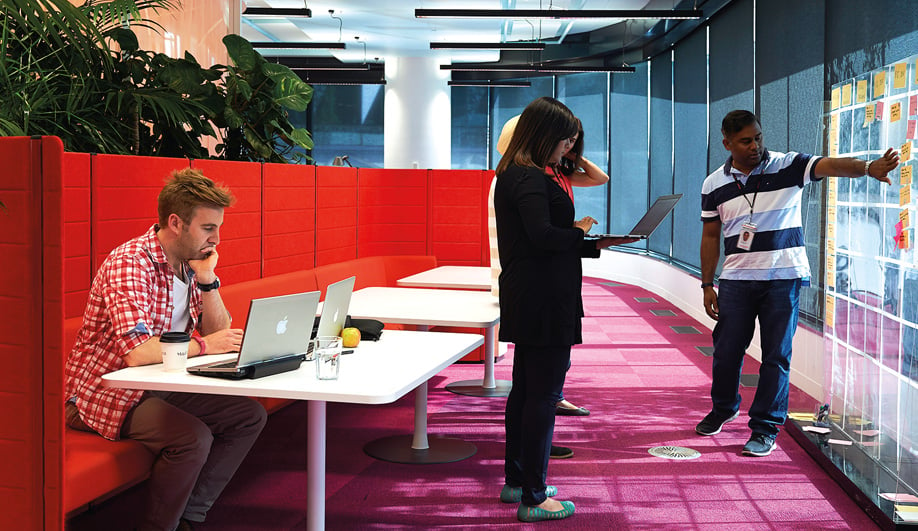 Beyond promoting physical movement, the building is filled with nourishing environments. Twenty-six types of work settings are available to the roughly 1,600 employees, including such tropes as standing desks, café-style breakout areas, balconies equipped with Wi-Fi, and quiet places for solitary downtime. Locating these spaces in different orientations allows for varied natural lighting conditions. Circadian lighting in certain areas mimics natural daylight patterns to support people’s biorhythms. Liberated from fixed seating arrangements, employees are free to choose where and how to work within these spaces, as individuals or as part of a team.

Another piece of the puzzle is the inclusion of plants. Foliage can be found on balconies, on the building’s exterior and throughout the interior. Two green walls 25 metres high flank the ground-floor entrance, bringing the green theme to the public realm. The effect is soothing, offering a visual respite from the tedium of screen-based work.

Collaboration is not just a keyword for the Medibank workforce. It is what informed Tony Dickens, lead architect and principal at Hassell, and his team – which consisted of Hassell’s own staff, plus interior designers, architects and landscape architects from other studios, each playing a part in every aspect of the facility and crossing disciplinary boundaries at will. 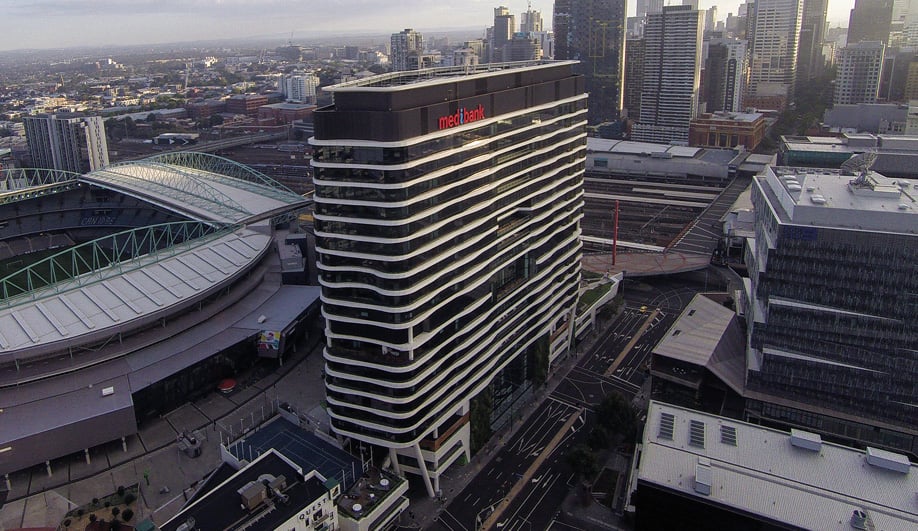 The new headquarters is in the Docklands, Australia’s largest urban renewal project, which has seen three square kilometres of abandoned land outside Melbourne transformed into a major office, entertainment and transportation hub.

The plaza level, which rises for several floors, was jointly conceived by Hassell and local firms Kerry Phelan Design Office, Russell & George, and Chris Connell Design. The result is a sense of variety and subtle variation worked into the experience of the building, which now contains a number of healthy features, including a multi-purpose sports court, and an edible garden with a demonstration kitchen nearby, to encourage good nutrition among the ranks.

Benefits of the HBW agenda are beginning to emerge. Internal polling shows a marked increase in productivity, by as much as 66 per cent, and absenteeism has dropped by five per cent. Perhaps the most striking aspect of Medibank Place, though, is the sculptural internal forms and voids, resulting in an interior that expresses a unique social and philosophical intent. ­