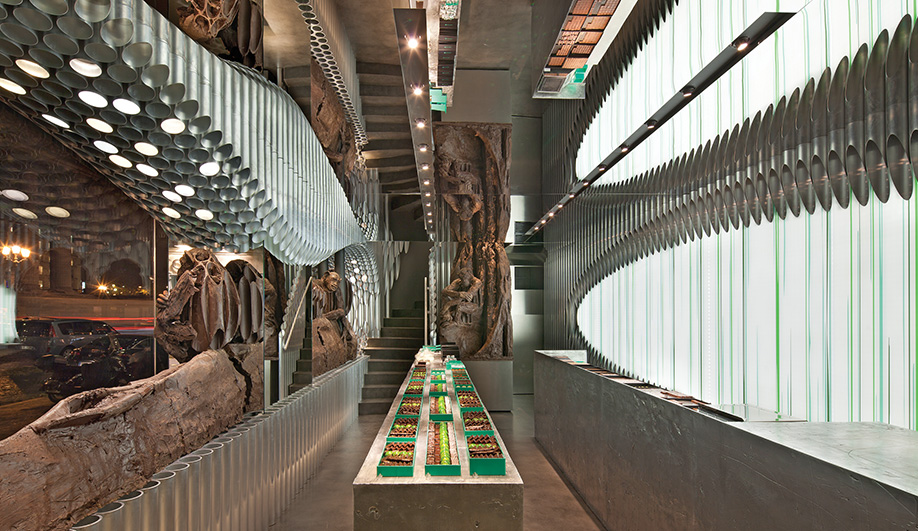 A central aluminum console is lined with chocolate samples, while the front window ledge is occupied by chocolate chimps. 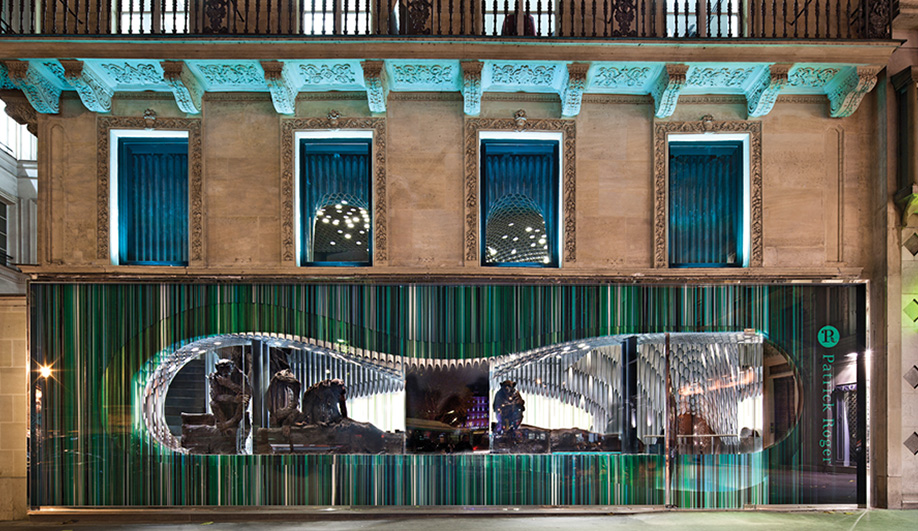 The primates have a view onto Place de la Madeleine through a bubble-shaped opening in the striated facade. More chocolate sculptures are housed upstairs.

Chocolate provocateur Patrick Roger walks into his newest Paris shop still wearing his motorcycle jacket and helmet. His red Ducati is parked just outside. This would seem to explain the undulating ceiling of cylinders (a wave of exhaust pipes?) that makes his namesake boutique an anomaly among old world chocolate shops. But when he emerges from the basement “chocolate mine,” now donning his chef’s jacket, he says that the futuristic, cave-like interior formed by the 5,100-plus sliced aluminum pipes, some fitted with light bulbs, was actually inspired by a honeycomb pattern. In addition to making contemporary artisanal chocolates, Roger also cultivates his own honey.

Designed by X-TU Architects, which employed parametric modelling to devise the sculpted volume, the interior speaks to Roger’s brand in more ways than one. The now signature bold green hue of the 16-year-old company (something of a fluorescent jade) that appears on all of its packaging also shows up as a striated graphic motif behind the shop’s full-length windows, which face the Place de la Madeleine, and again on the backlit rear wall. Framed in chrome, the facade resembles a museum diorama – even more so because of the enormous chocolate chimps that gesticulate from their carved cacao perch. An aluminum console against the back wall functions as a service counter, and another establishes two aisles within the narrow 60‑square-metre main space. Both were formed from massive chocolate moulds; hence the dribbles and various imperfections on their surfaces. “I was trying to bring a universe to the chocolate, and not something that exists as marketing,” says Roger, whose specialties include bonbons filled with exotic ganaches, and colourful caramels that resemble marbles sliced in half.

While this is not his first store (he has five others in Paris and three elsewhere in France and Belgium), it is the first to feature an upper level devoted to his chocolate art works. As fascinated by sculpture, architecture and fashion as he is by chocolate, Roger firmly believes that people eat with their eyes. “The taste passes through these shapes,” he says. This is design, in other words, that makes an impact on the eyes and melts in the mouth.

SHARE
Twitter, Facebook, LinkedIn, Pinterest, Email
TAGS
Cultural, Retail,
AZURE is an independent magazine working to bring you the best in design, architecture and interiors. We rely on advertising revenue to support the creative content on our site. Please consider whitelisting our site in your settings, or pausing your adblocker while stopping by.