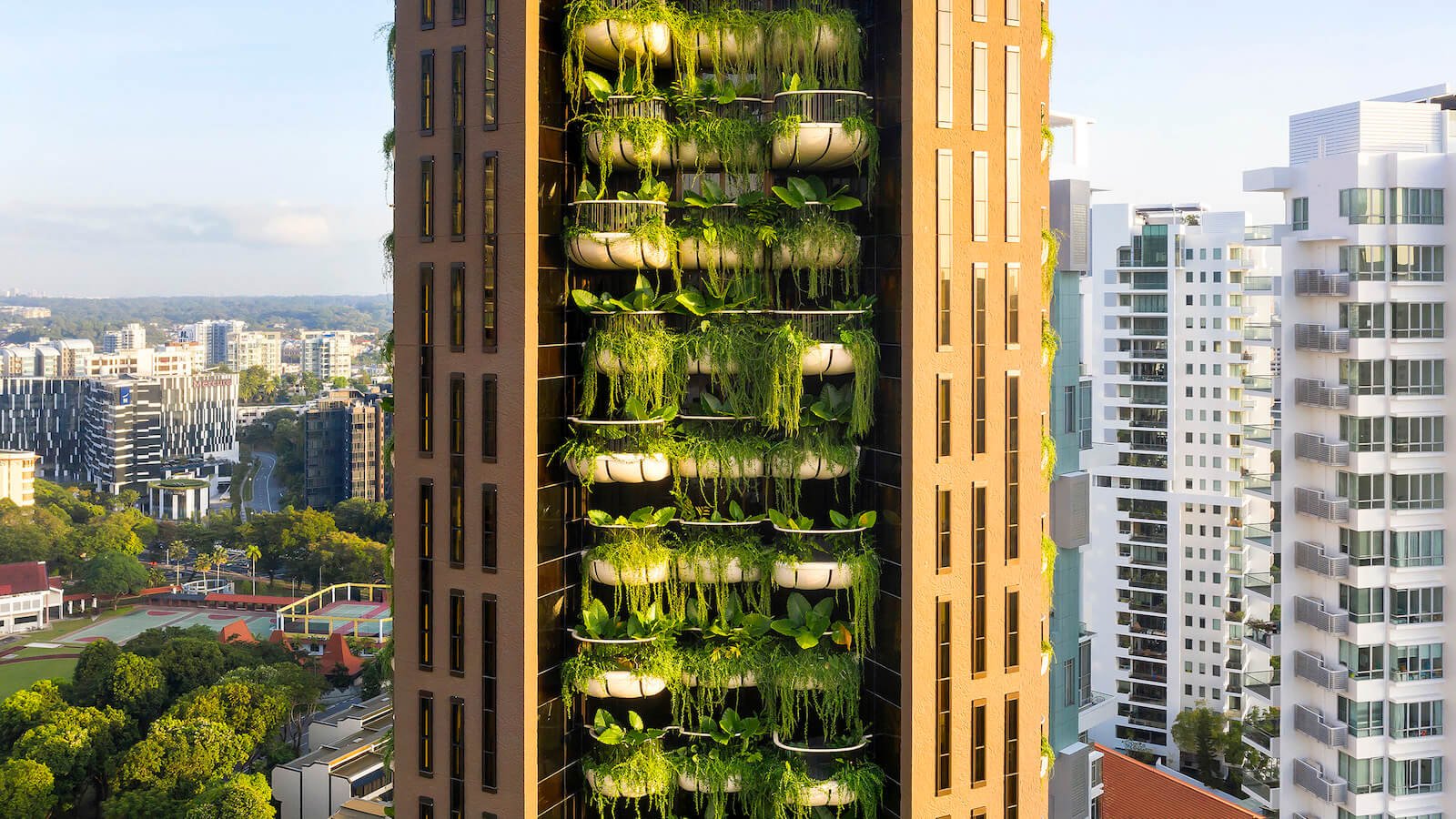 Singapore’s prestigious District 10 boasts a new “ultra-luxury” high-rise, one designed by none other than Heatherwick Studio, that plays up the island’s “City in a Garden” vision. The property’s über-swanky residences, 20 in all, each take up a complete floor measuring over 279 square metres (3,000 square feet) and come with four bedrooms. But the most attractive feature of the building (by developer Swire) is its arrays of voluptuous balconies, which conjure organic forms like massive mushrooms and giant cacti.

Their shapes recall the expressively contoured forms that appear like natural outgrowths in other recent Heatherwick works, most notably “Little Island,” currently being built on New York’s Pier 55. In the case of the balconies, even if they are sculpted from glass-fibre-reinforced concrete, they bring to mind an ostentatious bloom on the otherwise rectilinear edifice, which is clad in brown-toned textured concrete panels. Filled with hand-picked tropical plants, they also make a nod to Singapore’s famed Botanic Gardens, a UNESCO World Heritage site, as well as to the growing trend of incorporating nature directly into buildings. The seed planted by Stefano Boeri and Jean Nouvel has sprouted into a new genre of landscape–architecture hybrid.

The firm put some innovation into the floor plans as well. In order to facilitate the feel of “nature growing through and out of the apartment,” the official press release states, “the traditional box-like floor plate, common in the repetitive, angular steel and glass residential towers that bestride Singapore’s skyline, was pulled apart.” This allowed for the bedrooms and service areas to be placed along the perimeter in order to free up a large, light-filled central space for the living area; windows on three sides – as well as amazing views from the balconies – and natural cross-ventilation heighten the sense of capaciousness.

The interior finishes include oak and slate flooring, Carrara marble countertops and bathroom walls hewn from 180-million-year-old (!) cross-cut Jura limestone from Germany – all emphasizing ultimate luxury. This, after all, is a city with its fair share of exclusive clubs and wealth-flaunting denizens. Not that residents at this property will need access to rarified realms: With its rooftop sky garden and outdoor swimming pool, Eden might be the kind of paradise from which no one-percenter will want to be cast.