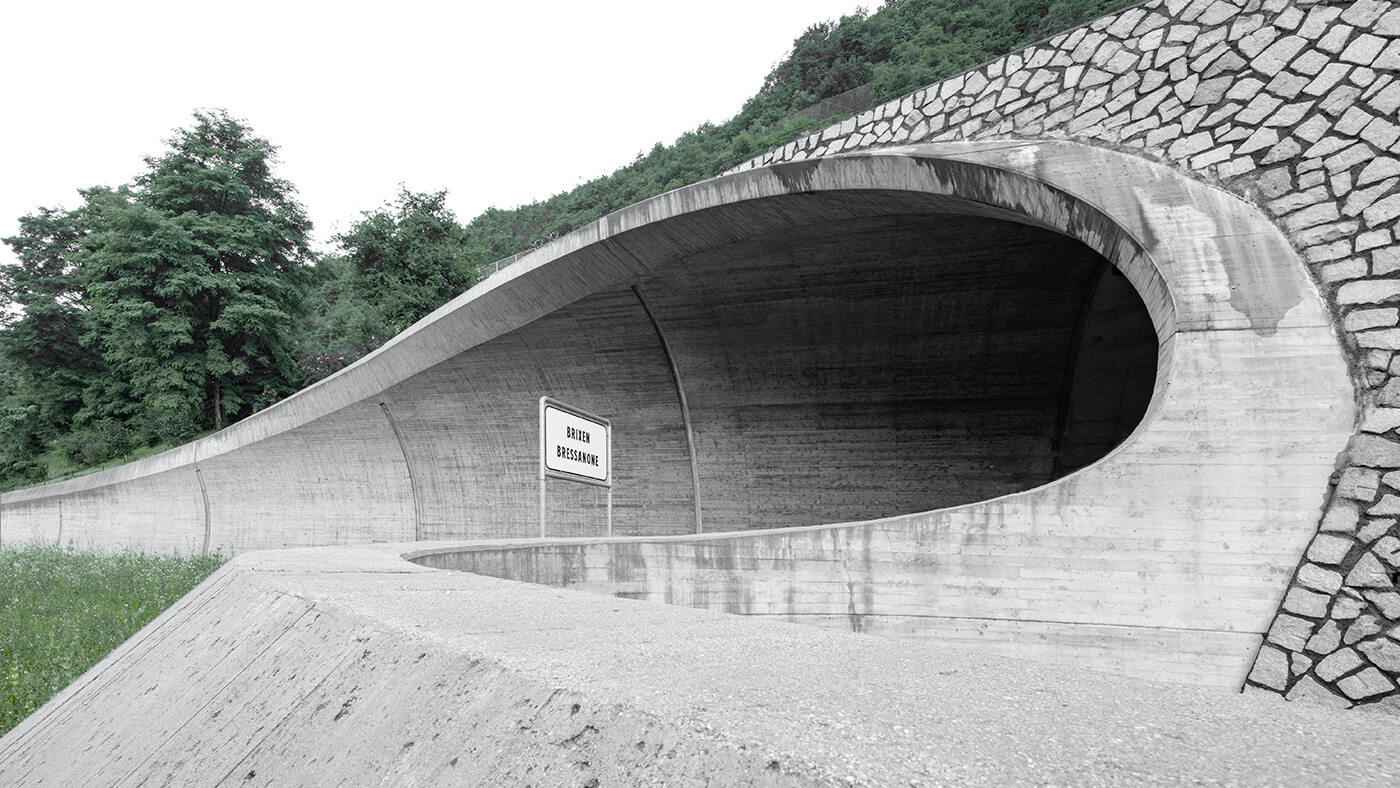 In a country such as Italy, full of historically rich settings in which citizens also live and work, integrating modern infrastructure in a way that’s simpatico with the environs can be a challenge. In the case of Bressanone, a small city in South Tyrol, the integrity of the town centre was maintained by burying the new link to a nearby ring road, yet outfitting the tunnel approaches with striking architectural flourishes. The unique success of the project lies in no small part to the involvement of architects in its execution — a rarity in the country when it comes to public works.

“The role architects play in large infrastructural projects has been increasingly marginalized over the past few decades in Italy,” says Matteo Scagnol, co-founder with Sandy Attia of MoDus Architects, the practice behind Bressanone’s new approach. “The country’s remarkable density and stratification of historical and natural contexts present unique and pressing challenges that the public administration needs to address. The ring road in South Tyrol is born of deliberate decision-making processes that comprehend the importance of design at every scale and as such created the conditions necessary for a cross-disciplinary collaboration to occur.”

It shows. First inaugurated in 2012, the five-kilometre-long ring road that bypasses the historic centre of Bressanone en route to Varna, the next city to the north, was conceived to connect the pair as fluidly as possible, reducing traffic congestion and air pollution in the process. To those ends, MoDus’s design brief called for a series of interventions — tunnel portals, retaining walls, acoustic barriers, service substations, mechanical structures, ventilation chimneys and various signage elements — along its entire length. The recently opened tunnel portals — which “lie at the intersection of landscape, infrastructure and mobility,” according to the architects — punctuate a central juncture of the ring road linking downtown Bressanone with the main thoroughfare.

“These interventions,” say the MoDus founders, “mark the threshold between below ground and above ground, becoming part of the urban landscape of Bressanone and also defining the fleeting motorist experience.”

Travelling from the ring road toward the city, motorists now navigate a roundabout and then pass through a short, U-shaped tunnel to arrive at Via Roma, the main road into town. Facing east, the tunnel’s open mouth is elegantly sinuous, heralding arrival into the city and eschewing “the strictly technical or functional vocabulary typically offered by infrastructural projects.”

At the other end of the tunnel — the one closest to Bressanone — is a less dramatic though also sculptural portal, its wavy yet more discreet contours in deference to the low-rise town centre nearby.

The exposed concrete of both the tunnel and the portals is made of the same aggregates and excavation materials used to construct the 64-kilometre Brenner Base Tunnel, which runs below the Alps from Italy to Innsbruck in Austria.

Acoustic barrier walls made of larch and ventilation chimneys crafted out of Corten steel round out the program. The next and final segment of the ring road, projected to be completed in 2025, will extend the intervention to its final trajectory past the town centre of Varna.

“Civil engineering projects provide a unique opportunity to bring together the different scales — and at times jarring specificities — of infrastructure, landscape [and] architecture,” says Attia. “The ring road underlines the reciprocity of these disciplines as a singular design challenge, not just given the environmental and economic impact of these projects, but also as a model for small cities grappling with questions of mobility, heritage and placemaking.”