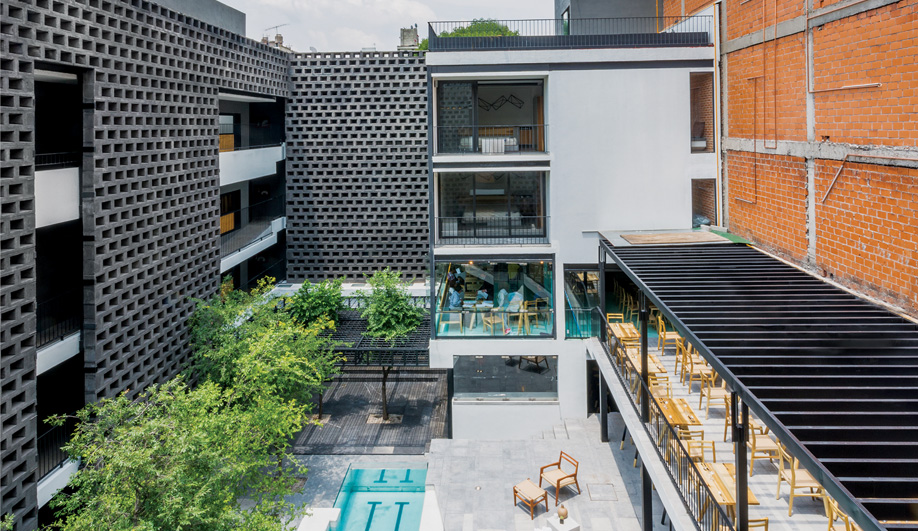 The oasis-like courtyard is the hotel’s architectural and social focal point. A screen of custom bricks lines two walls in an homage to mid-century buildings in the neighbourhood. 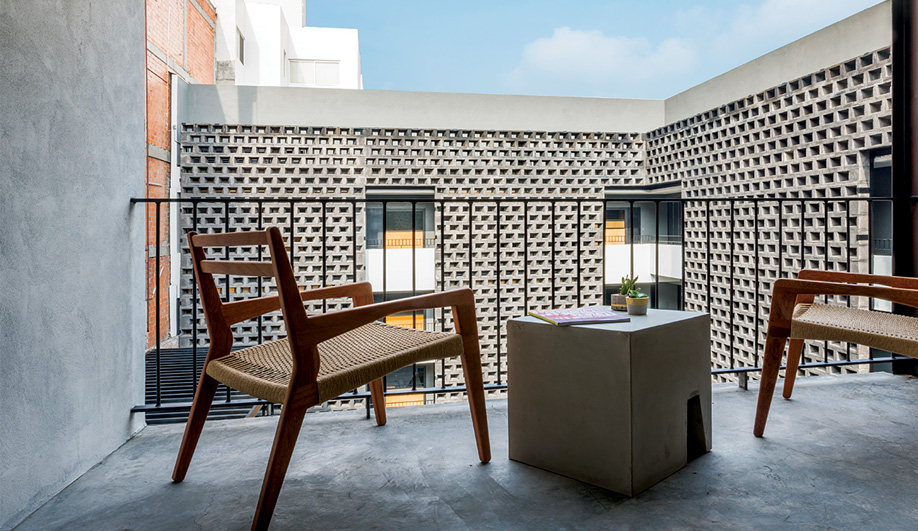 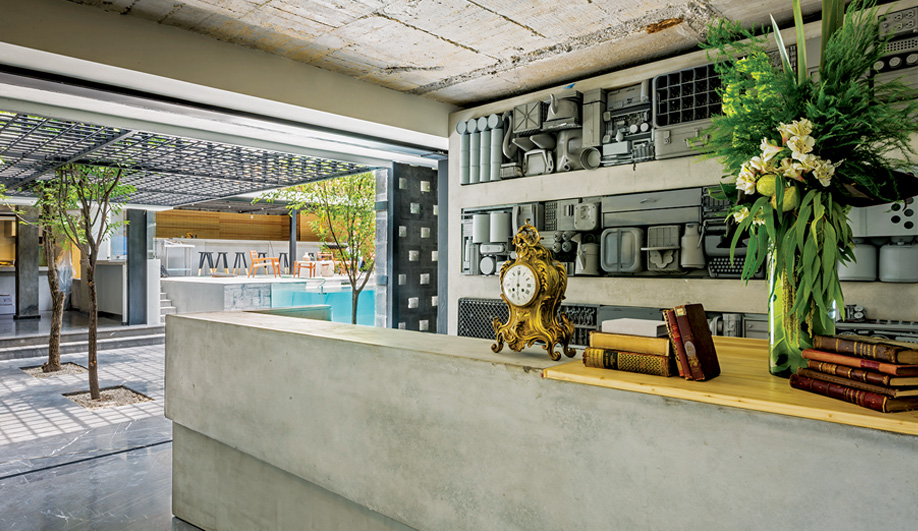 A sculpture by Los Originales Contratistas, made from objects found around the city, adds an unusual backdrop to the reception area. 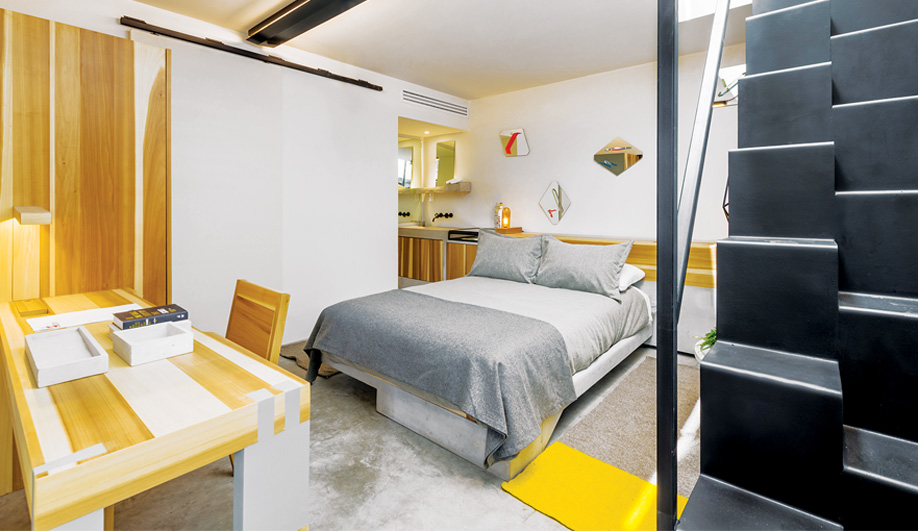 The chic yet welcoming rooms feature locally made furniture and rugs. 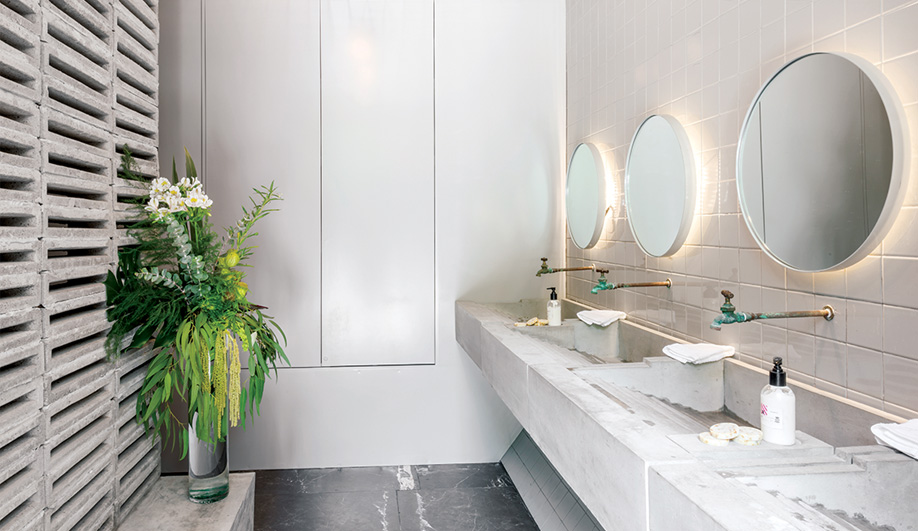 During the renovation, the bathrooms were entirely replaced to offer guests the latest amenities.

Overflowing with local culture, the renovated Hotel Carlota is a hidden gem just steps from the Mexican capital’s best attractions.

With its ancient Spanish churches and art deco apartments, mid-century office towers and expressive modernist galleries, Mexico City is a place that rewards curiosity. Hotel Carlota, in the bustling Cuauhtémoc district of glass skyscrapers and traditional stucco homes, is a quick walk from the ultra-hip Roma Norte and Condesa neighbourhoods, and equidistant to the leafy splendour of Chapultepec Park and the luxury shops of Polanco. With 28 standard rooms and eight suites surrounding a courtyard and its glass-walled swimming pool, the hotel melds international design with unexpected flourishes of contemporary Mexico.

Carlota began life as the Hotel Jardín Ama­zon­as, a swinging destination that lost its sheen over the years. During the 1980s, in a misguided attempt to modernize it, the exterior was clad in sheets of mirrored glass, and its massive central courtyard was carpeted in Astroturf. Local firm JSA Arquitectura has helmed the four-year renovation, which brought the hotel into the 21st century.

“Architecture from the outside can be very anonymous in this city, but it should unfold as you enter,” says Javier Sanchez, whose firm has produced a range of colourful public and private projects across the country. Instead of removing the entire glass facade, the architect chose to just replace the ground-level panes, opening the design shop and the restaurant to the street while retaining a degree of anonymity.

A sculpture by Los Originales Contratistas, made from objects found around the city, adds an unusual backdrop to the reception area.

Guests enter through a narrow corridor from an adjacent lot, with faded paint spelling out “Jardín Amazonas” on a wall high above. Moving past a reception desk that features an installation of found objects by local firm Los Originales Contratistas, they arrive at the central courtyard, a space that feels simultaneously industrial and organic. Concrete surfaces are softened by a row of shade trees, along with mid-­century-style wooden furniture made locally by La Metropolitana.

The oasis-like courtyard is the hotelu2019s architectural and social focal point. A screen of custom bricks lines two walls in an homage to mid-century buildings in the neighbourhood.

At half of its previous size, the new lap pool is still big enough for a quick dip, while it leaves more space for poolside lounging and dining. JSA kept the existing three-storey structure of rooms facing the courtyard, separating two sides from the exterior circulation with a screen of custom-made bricks, in a nod to the facades of nearby 1950s buildings.

The interior walls reveal a scarred mix of brick and concrete, a reminder of the site’s many past renovations, and an artful juxtaposition to the refinement now found within. “We began taking the finishes off the walls because they were in bad shape,” says Sanchez. “Then we realized that some of them were very beautiful, so we had this idea of peeling back and finding surprises and leaving them exposed.”

The chic yet welcoming rooms feature locally made furniture and rugs.

The rooms, now renovated and equipped with sleek bathrooms, expand on this eclectic blend of industrial austerity and artistic whimsy. Felt rugs with colourful geometric patterns, handmade by Déjate Querer in nearby Juárez, warm the raw concrete floors, and a ready supply of traditional amaranth candy bars (a local specialty) are kept on hand for late-night snacking. While the standard rooms lack natural light, the suites open onto stunning private rooftop terraces, complete with cacti and other flora.

The restaurant and bar serve a mix of high-end Mexican dishes and European-inspired fare, all prepared with an emphasis on seasonal, local and organic ingredients. A newly installed glass and concrete platform overlooking the courtyard houses the main al fresco dining area, with the best seats in the house arranged along the edge. Sitting here on a warm night, with a mezcal cocktail in hand, it’s easy to forget that you’re still just a few metres away from the bustling streets.

The Museo Anthropologico and Frida Kahlo’s Casa Azul studio are popular draws for visitors seeking a taste of Mexico City’s rich cultural history. The following design highlights balance that heritage with an equal measure of the country’s present.

1 Museo Soumaya and Fundación Jumex
Commissioned by Mexican telecom billionaire Carlos “Slim” Helú to house his art collection, Museo Soumaya (on right) has been praised far more for Fernando Romero’s facade of shimmering metal scales than for the rather eclectic selection of artworks within. The contemporary art collection at the Jumex Museum (left) – housed in David Chipperfield’s travertine-clad building just across the plaza – is truly worth a visit.

2 Taxonomía
Located inside the Hotel Carlota, this shop specializes in clothing, decor, jewellery, furniture and acces­sor­ies from Mexico’s top young designers. Among the roster of more than 60 brands are a selection of mezcals from Por Que, Scandinavian-inspired furniture by La Metropolitana, and ceramics by Lagos del Mundo.

3 Xaman
Down a nondescript flight of stairs, on a narrow street in Colonia Juárez, this speakeasy-style bar serves up innovative cocktails made with Mexican botanicals to the city’s hippest scenesters. The space, designed by Estudio Atemporal, is all dim recessed lighting, exposed concrete beams and plants under glass, making it feel like the laboratory of a fashionable mad scientist.

4 Cineteca Nacional
Mexico’s national film centre was extensively updated in 2012 with the help of Rojkind Arquitectos, which transformed a collection of drab buildings into a landmark. While primarily devoted to preserving and promoting Mexican cinema, it also holds regular screenings of new and classic international films (including some in English). Catch a film in the outdoor amphitheatre to experience the site at its best. ­

5 Onora Casa
This home decor boutique in the tony Polanco district is the brainchild of a New Yorker who lives in Mexico and a Mexican designer who lives in Los Angeles, both dedicated to chan­ging the world’s perception of “Made in Mexico.” The goods – from colourful wooden serving bowls to fine textiles and beaded skulls – combine rich local decor­ative traditions with a sophisticated modern sensibility.