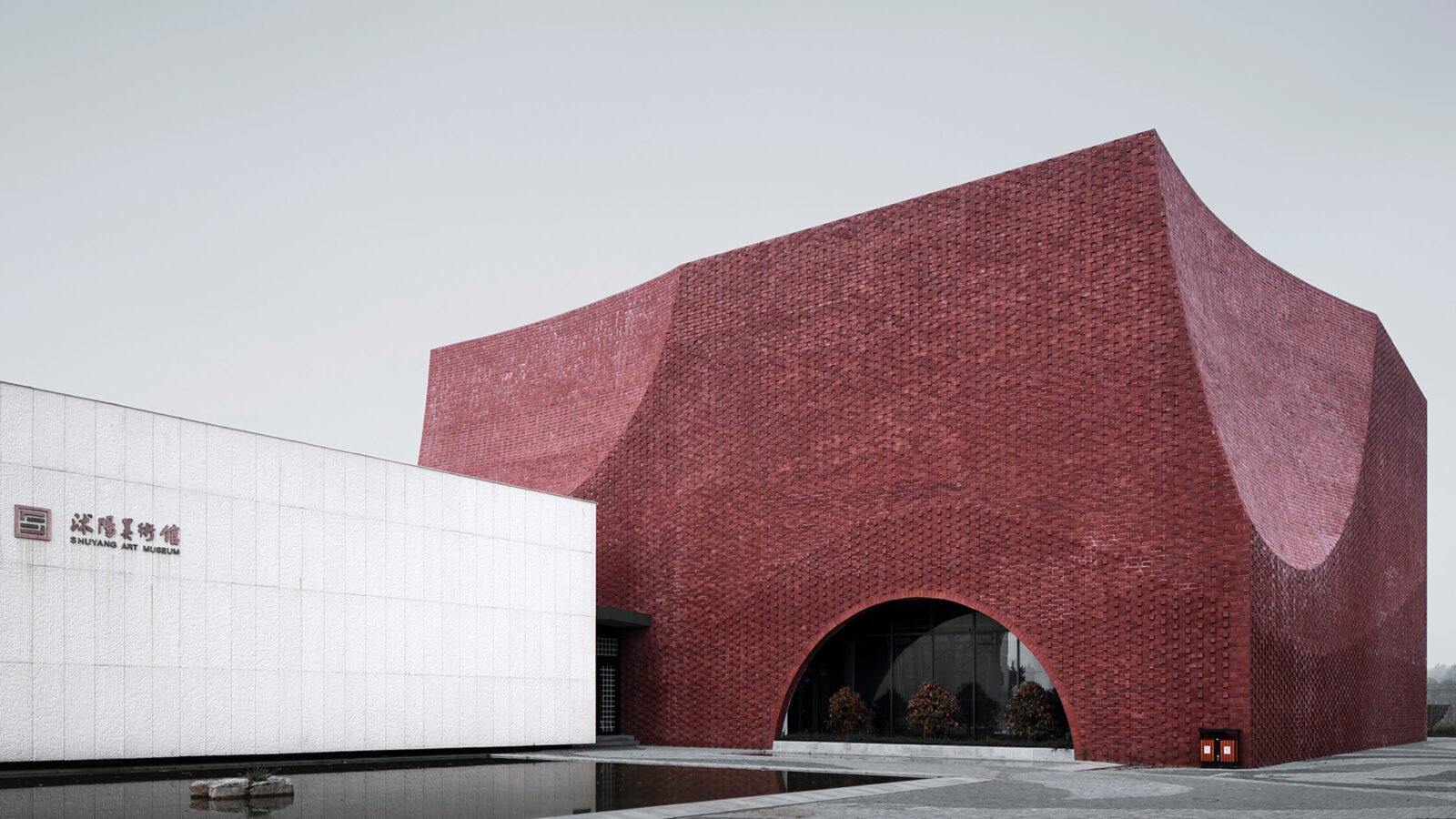 How Ancient Calligraphy Inspired a Sprawling Museum Complex in China

Dating back over 2,000 years, calligraphy has long been an integral part of Chinese culture. While these works fill the halls of museums the world over, rarely has the tradition been granted an institutional environment in its own right. Occupying an expansive site on the outskirts of Suqian City in China’s Jiangsu Province, the birthplace of the artform, Shuyang Art Gallery draws on the fundamental properties of the practice to provide ample space to both showcase and celebrate the nation’s calligraphic history.

Conceived by the Architecture Design & Research Institute of Zhejiang University (UAD), the new centre embodies the ancient tradition across its 10,475-square-metre footprint, appearing almost like a village in miniature. Taking inspiration from the tones of black, white and red (representing the ink, paper and wax seal respectively) as well as the balance between solid and void, the complex comprises 10 discrete volumes orbiting a central courtyard.

Dividing the austere masses from the swirling landscape, a linear pond runs along the entire eastern portion of the site, widening at its northernmost point to usher guests into complex. The grand red volume — the most dramatic and evocative of the structures — greets visitors while appearing “like a condensed seal print on the elegant scroll of ink and wash,” according to the designers. Each of the four corners of the monolithic mass, clad in local Yixing clay brick, is carved, giving the pavilion its unique presence while gesturing to the molten material that inspired it.

Inside, an undulating garden enveloped in glass and steel creates a dialogue between the natural world and the historic artifacts held in the nearby displays. This organic void also floods the three-storey structure with natural light, reaching deep into the column-free halls. 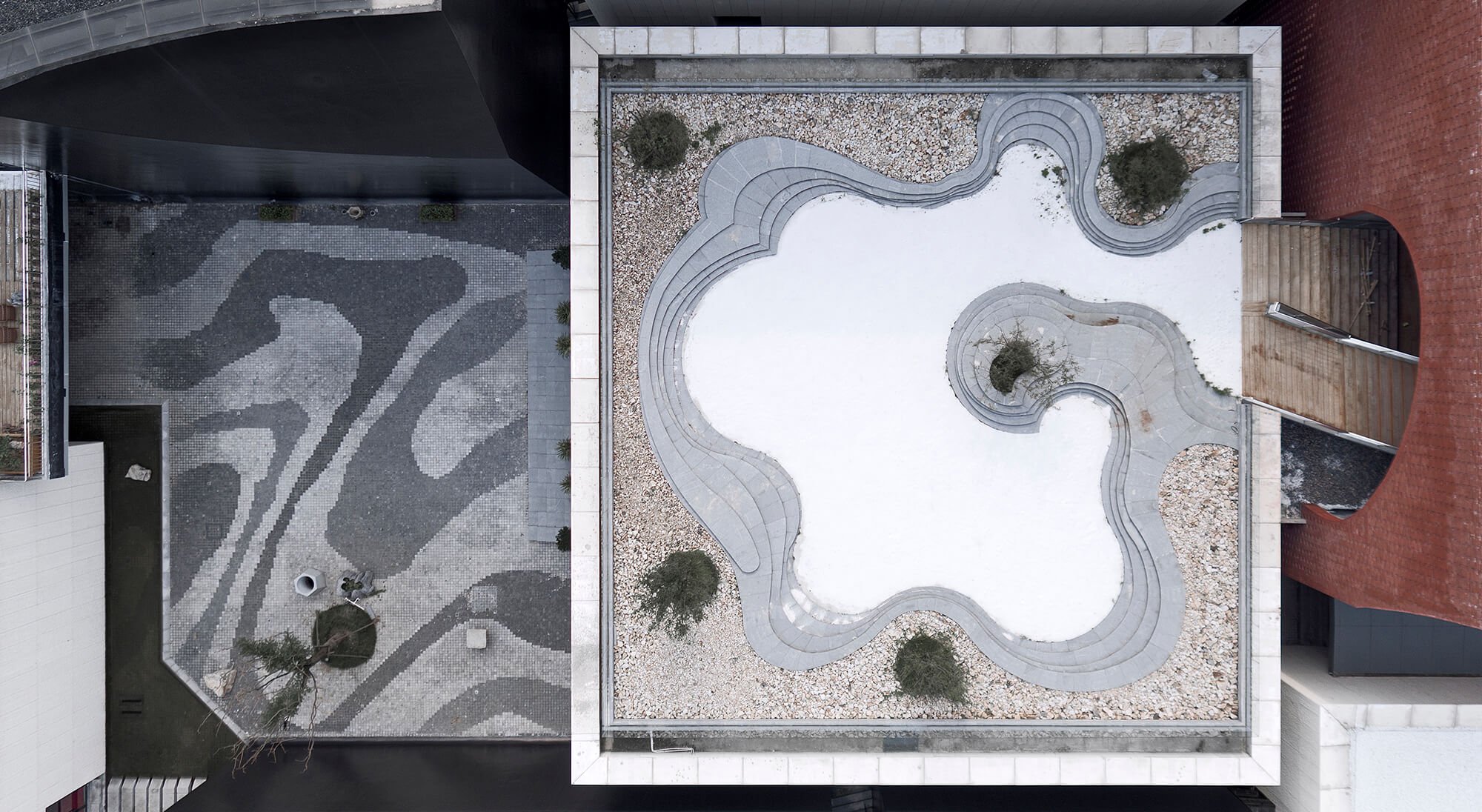 Immediately off the primary exhibition hall is the grand auditorium, housed within a white concrete board-clad structure, textured with a vertical chisel marks to capture the essence of rice paper. On its roof, a swirling garden connected to the red brick building takes its formal cues from “the pattern of ink spreading.” This technique is also continued in the paving of the interior courtyard as well as the gallery’s external landscaping.

In the sheltered, al fresco heart of the gallery, the linear pond intersects with the individual buildings, resulting in floating bridge that leads to the southern exhibition halls — maintaining a two-metre-wide circulation path between outside and in. It’s what the designers call a “gray space” where “the outdoors can be extended into the indoor area,” with “the volume of the body dug in an introverted manner.”

Rounding out the complex, three exhibition spaces trimmed in dark grey fluorocarbon paint take deep noir ink as their departure point. Aside from their tone, the structures each feature scalloped corners and rounded bases that appear to bleed into the ground as if mercurial. Its a striking and compelling connection that roots the museum in its program, its site and its culture.

From its physical characteristics to its conceptual backing, the Shuyang Art Gallery not only honours the expansive history of the artform in its ample plot, but embraces the formative tradition as an integral architectural device. As the designers conclude: “The concept of [the gallery] abstracts the most fundamental [aspects] of Chinese calligraphy…responding to [its] ideological and practical work.”