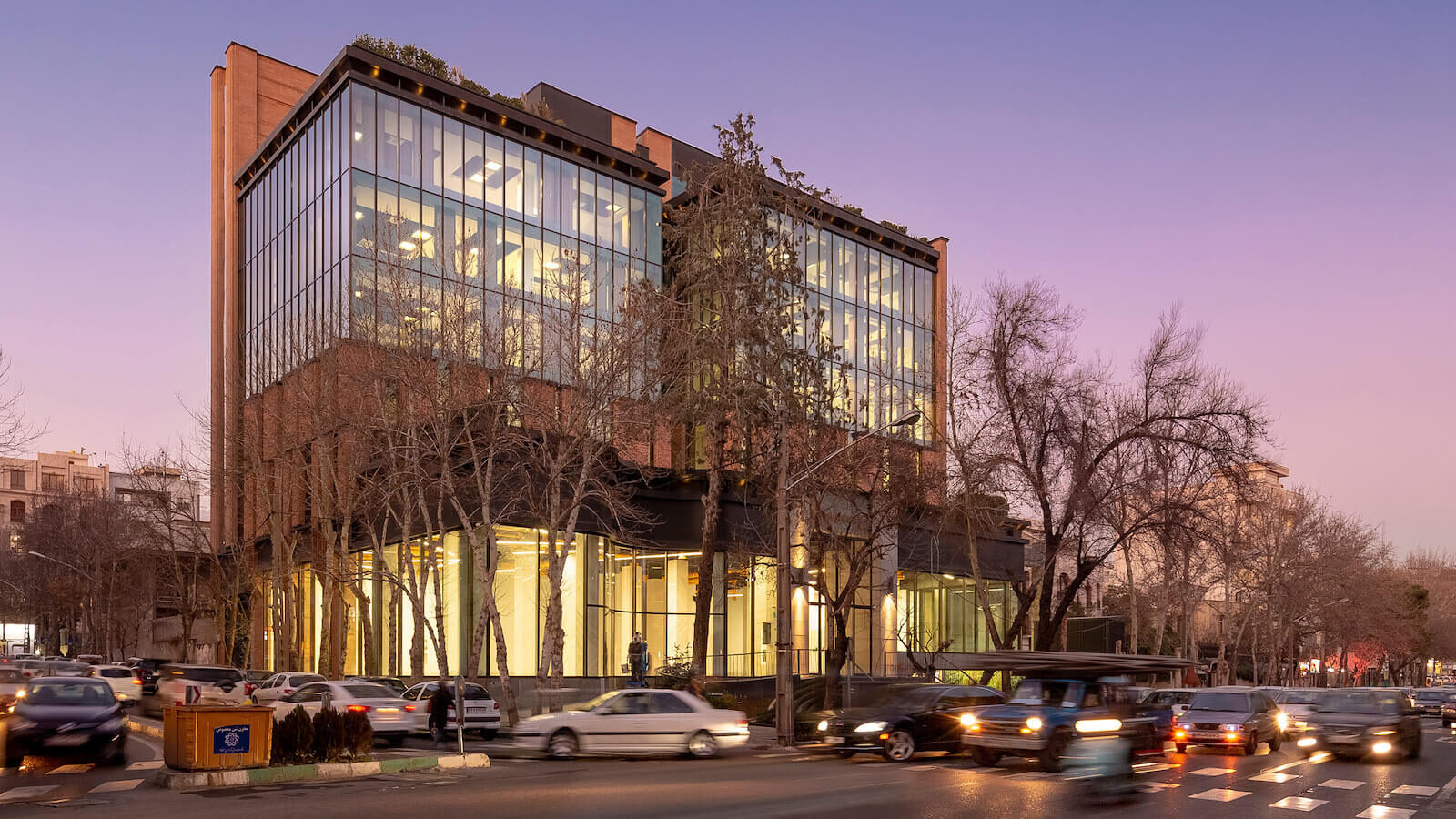 In a Tehran Office Block, Brick Gets the Star Treatment

Ákaran Architects clads a mixed-use building with solid and perforated brick panels, inside and out.

Iran is no stranger to building with bricks. Mud and clay masonry dates as far back as the ancient Sumerians, and its use has continued through the region’s history. The Jameh Mosque in Isfahan, a Unesco World Heritage Site, is an eighth-century landmark of daring domes, vaults, and perforated screens all built out of the simple earthen block.

Naturally, the material continues to play a starring role in Persian architecture. The brick’s capacity to form both complex parametric shapes and delicately perforated shade screens has allowed for this vernacular material to take on novel and exciting applications in contemporary typologies. 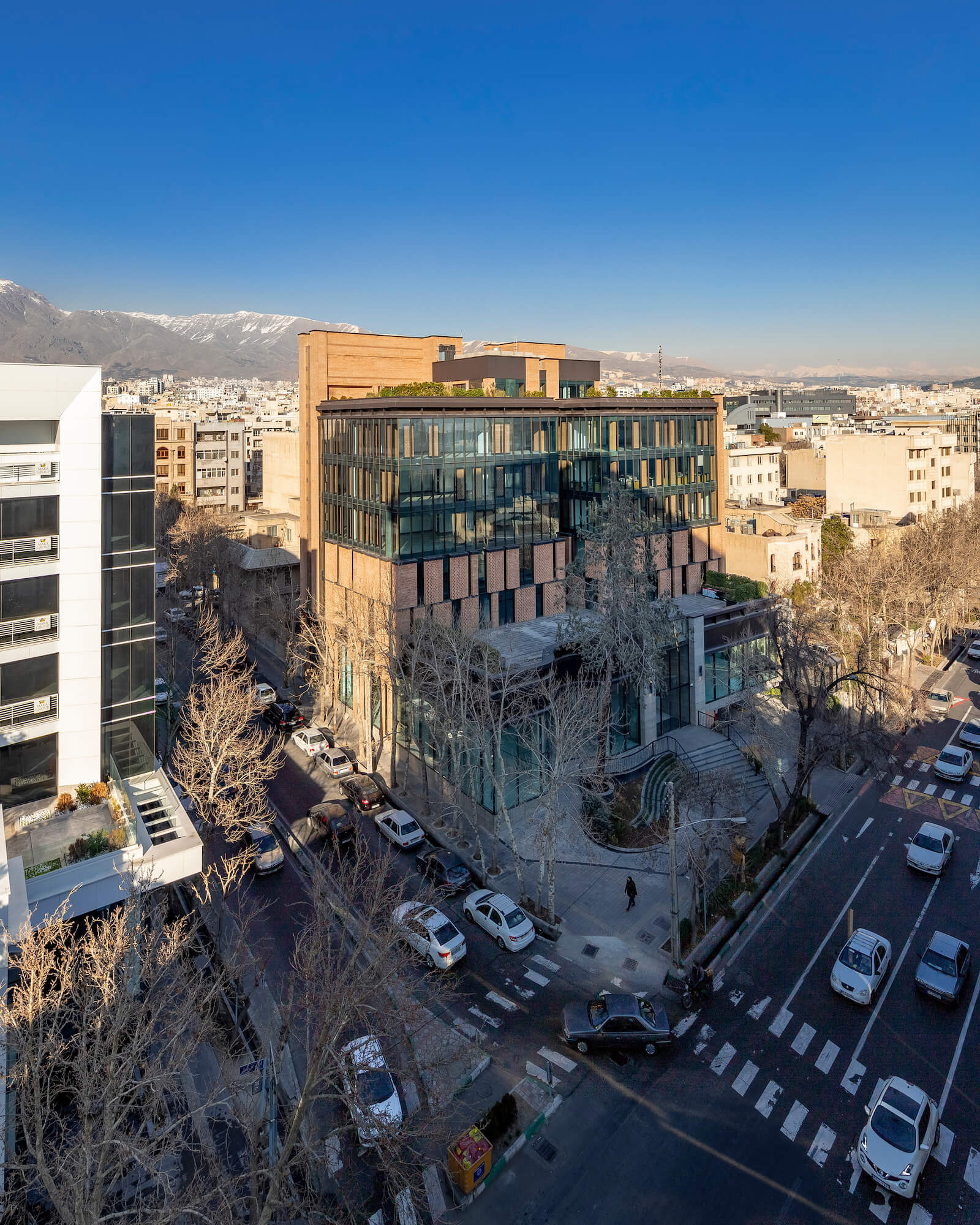 One such example is Zomorrod 11, a new mixed-use building in Tehran, Iran by Ákaran Architects, where a mix of fixed and mobile brick panels wrap its six storeys inside and out. Its material palette and thoughtful massing situate the project within Iran’s built heritage, and the capital city’s urban fabric.

It’s no minor piece of the city, either. While it’s surrounded by small-to-midrise buildings, Zomorrod 11 overlooks a large intersection: its major façade fronts a busy one-way road that links two of Tehran’s main arteries. Ákaran, based in both Tehran and London, understood the site’s importance immediately, observing that its nature on the passer-by “is affected by speed and haste.” The firm’s effort to position the building within the cityscape, even to those driving past, therefore required simple gestures in material and massing. 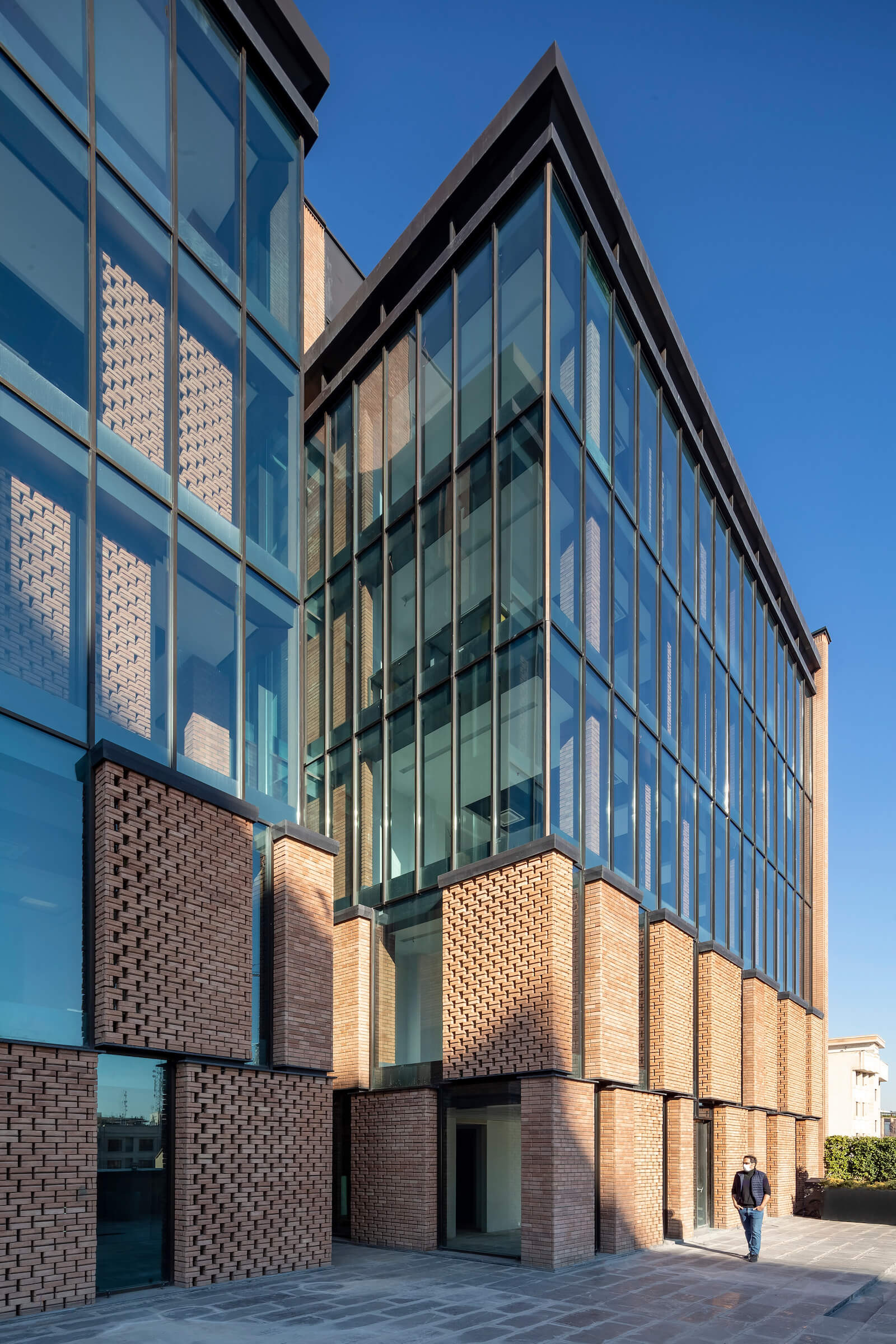 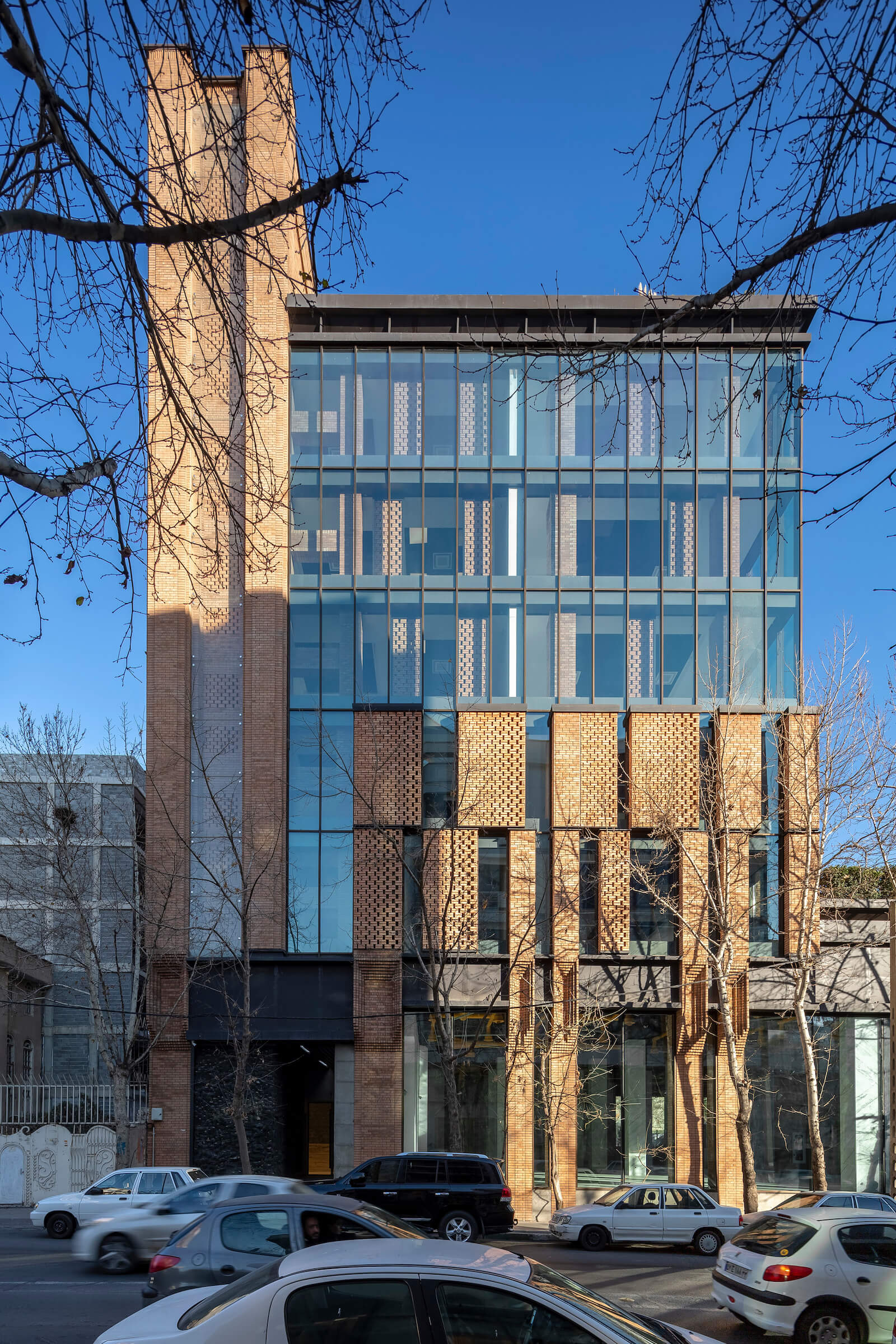 The resulting six-storey building is in direct dialogue with its neighbours and the road, like a cultural billboard: legible at fast speed, with more detail on close examination. A wide commercial podium opens to the public with solid columns framing double-height ceilings and glazing, which curves around a mature tree and ramp near the entrance.

Above, the building takes a significant step, its roof planted with a generous terrace, and the office block visually subdivides into two semi-split floorplates, echoing the rhythm of smaller buildings along the street. 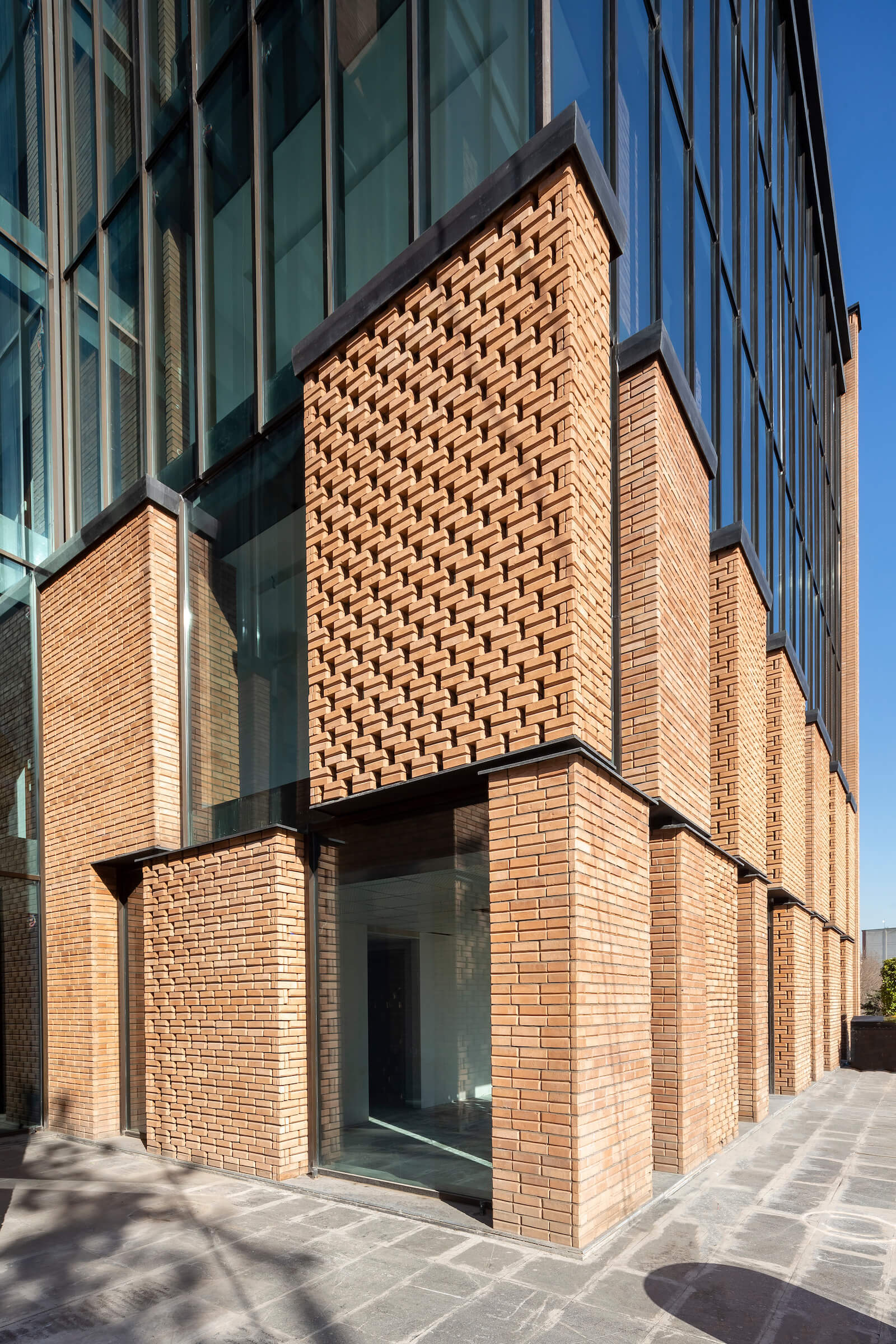 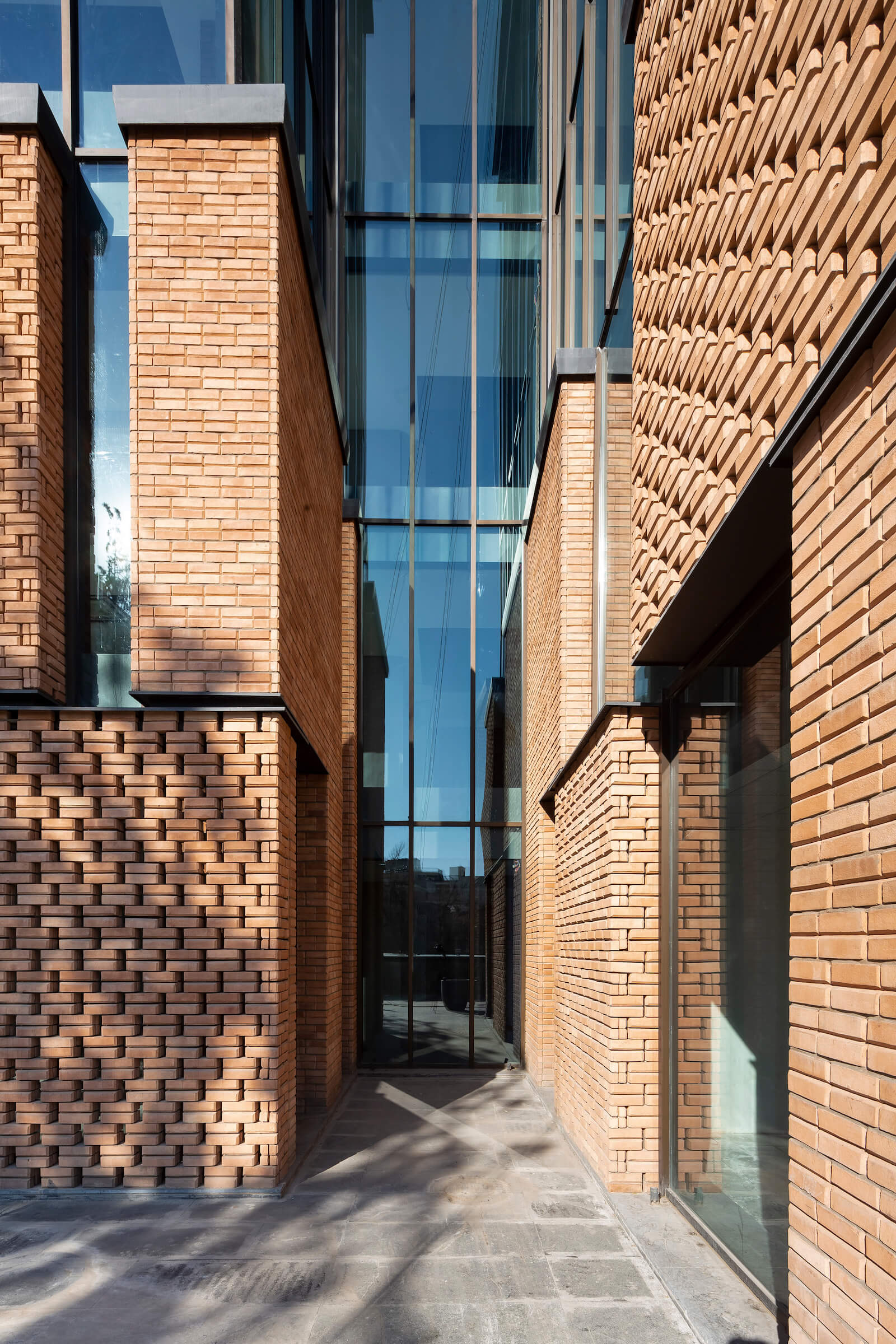 At the rear, a vertical slab houses the circulation, including access to an additional rooftop terrace. Despite its height, it never dominates, but provides a stable backdrop to the office’s visual dynamism.

Ákaran Architects deploys brick liberally across the canvas of this massing, from sedate columns at ground level to interior finishes throughout the office spaces and five levels of underground parking. With the vernacular material perpetually in sight and reach, it forms a unifying element of structure, texture and shade.

On the façade, the approach is simple: from the grade level up to the third floor, solid brick walls alternate with perforated panels. In addition to visual privacy and sun-shading, this visual solidity echoes the height of neighbouring buildings, further embedding the structure in its urban surroundings. 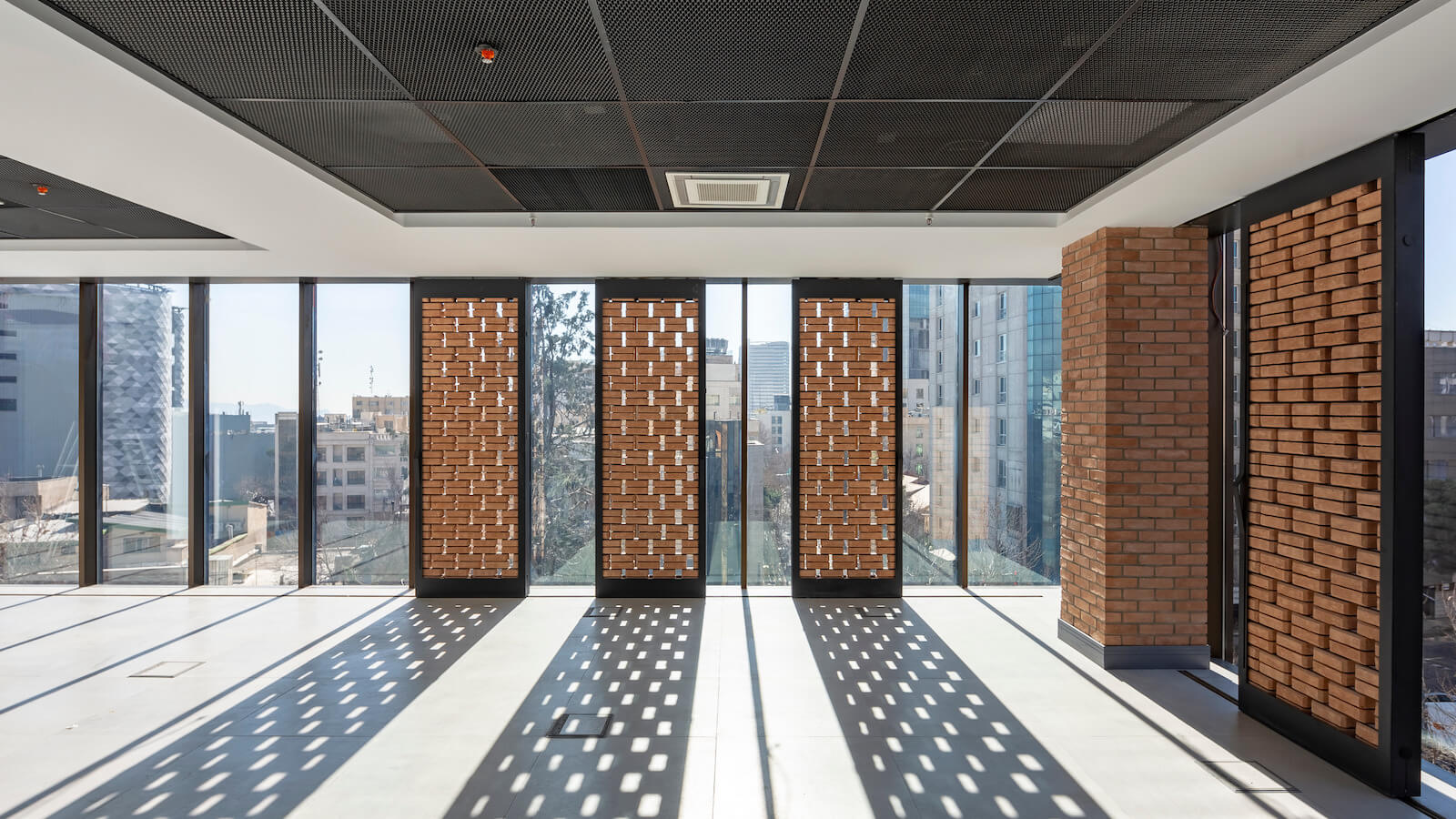 From the fourth storey up, the perforated brick screens move inside, behind the glass curtain wall. In the workspaces, they become dynamic shading panels, built of custom hollow bricks, bolted into frames, and engineered to roll easily along rails despite weighing around a thousand kilograms each.

“The mobile brick panels not only provide an ever-changing image of the building on the outside,” explain the architects, “but they also enable the user to control the amount of sunlight that flows into the office spaces.” Though barely visible to the city during the day, because of the reflective curtain wall, their shifting textures are revealed as a continuation of the lower façade come nighttime. 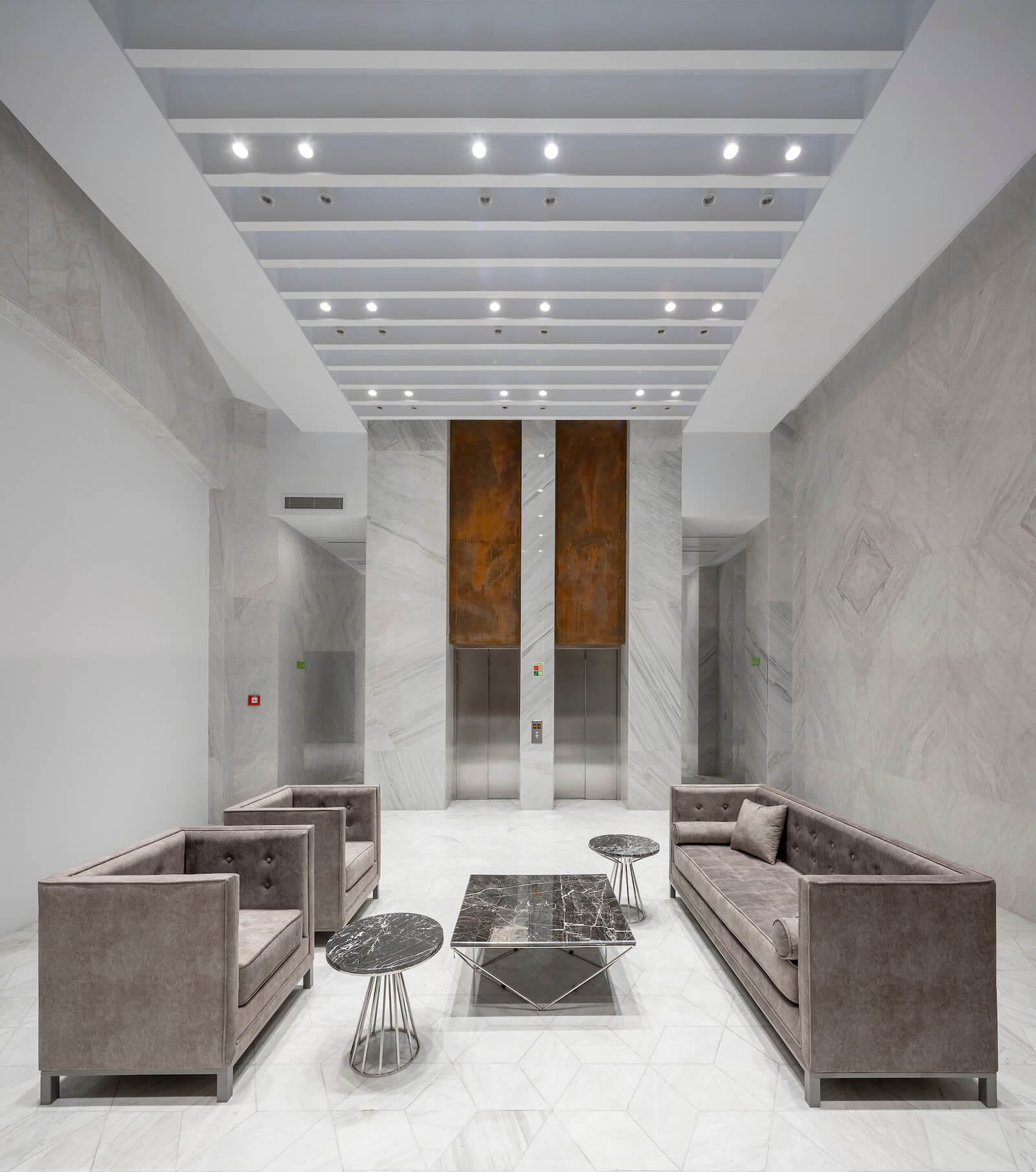 Nestled at the foot of the circulation slab, a private lobby provides an additional moment of texture through marble finishes and sculptural triangular tiles.

Mixing key details with careful massing is all part of Ákaran Architects’ approach for such a visible, fast-paced site. “The architecture aims for the drivers and pedestrians to pause, even in passing,” they say, “and perhaps reminisce through a modern structure with ties to the culture’s past.”

Ákaran Architects clads a mixed-use building with solid and perforated brick panels, inside and out.