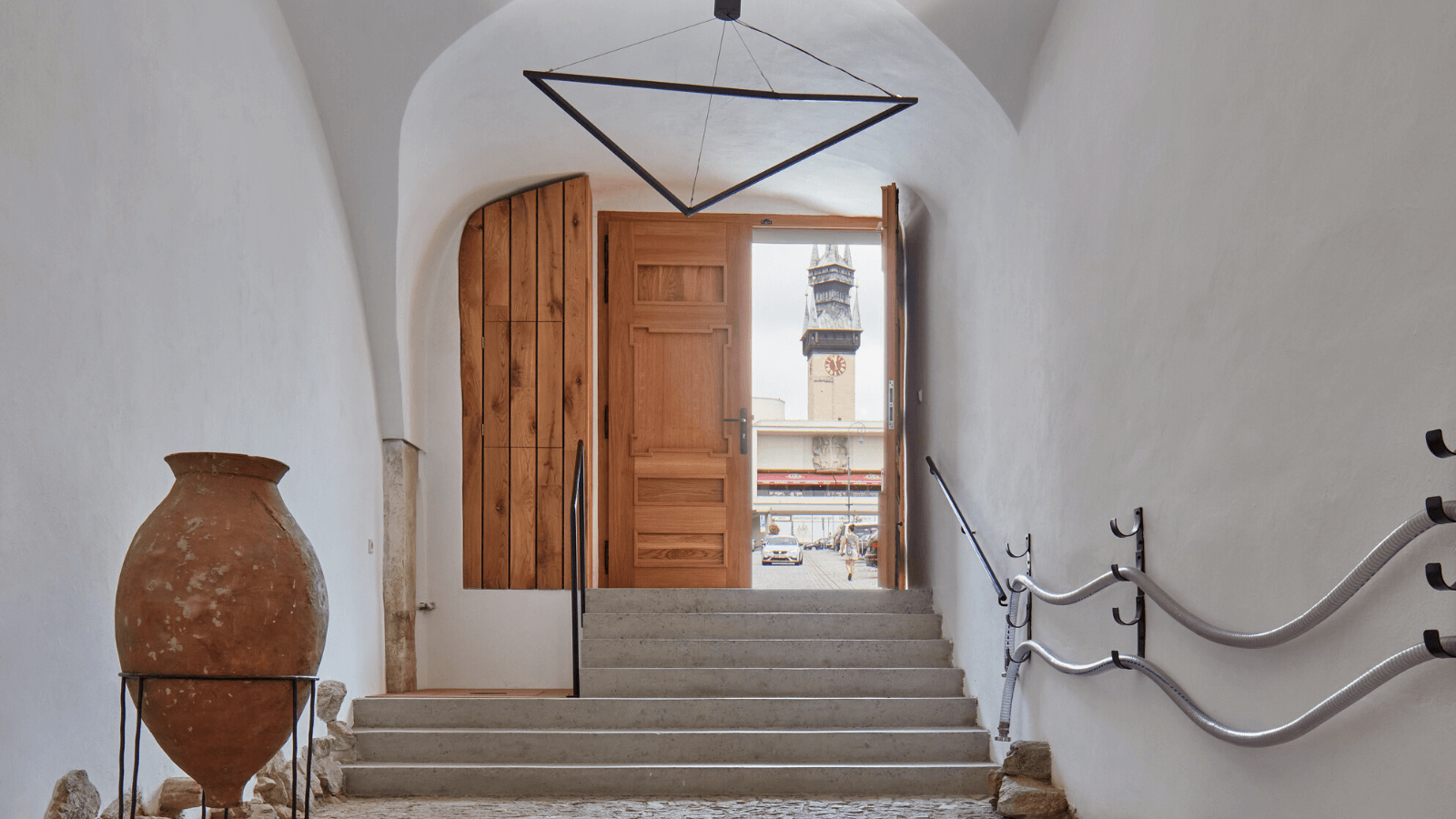 In a Townhouse Turned Winery, Czech Studio ORA Delivers an Ode to Viticulture

Although winemaking in the Czech Republic goes back at least a dozen and a half centuries, it has only been fairly recently that Czech wines have resonated globally. Much of the attention has been focused on South Moravia, the centre of viticulture in the country. And the buzz is being generated not only by the quality of the region’s whites, but by the infrastructure being built to make and showcase them. 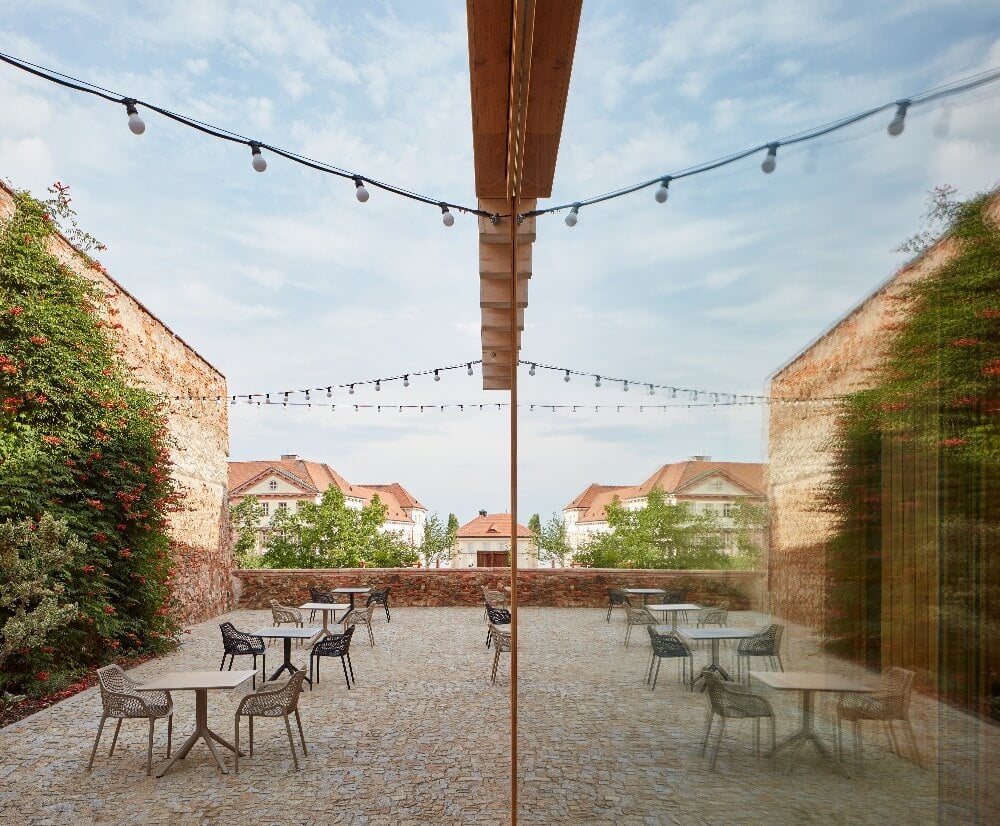 Recently, for instance, Lahofer Winery, one of the largest in the Czech Republic, unveiled its spectacular new facility by Chybik + Kristof in the countryside outside Znojmo. Now, Winery Nešetril, a smaller concern based in Znojmo itself, is turning out its vintages in an artfully refurbished Renaissance-era townhouse on central Masaryk Square.

Completed by the Czech studio ORA, the retrofit kicked off five years ago with a small wine bar and today encompasses a new main entrance, guest accommodations, service rooms, a terrace atop a courtyard extension and underground production areas. 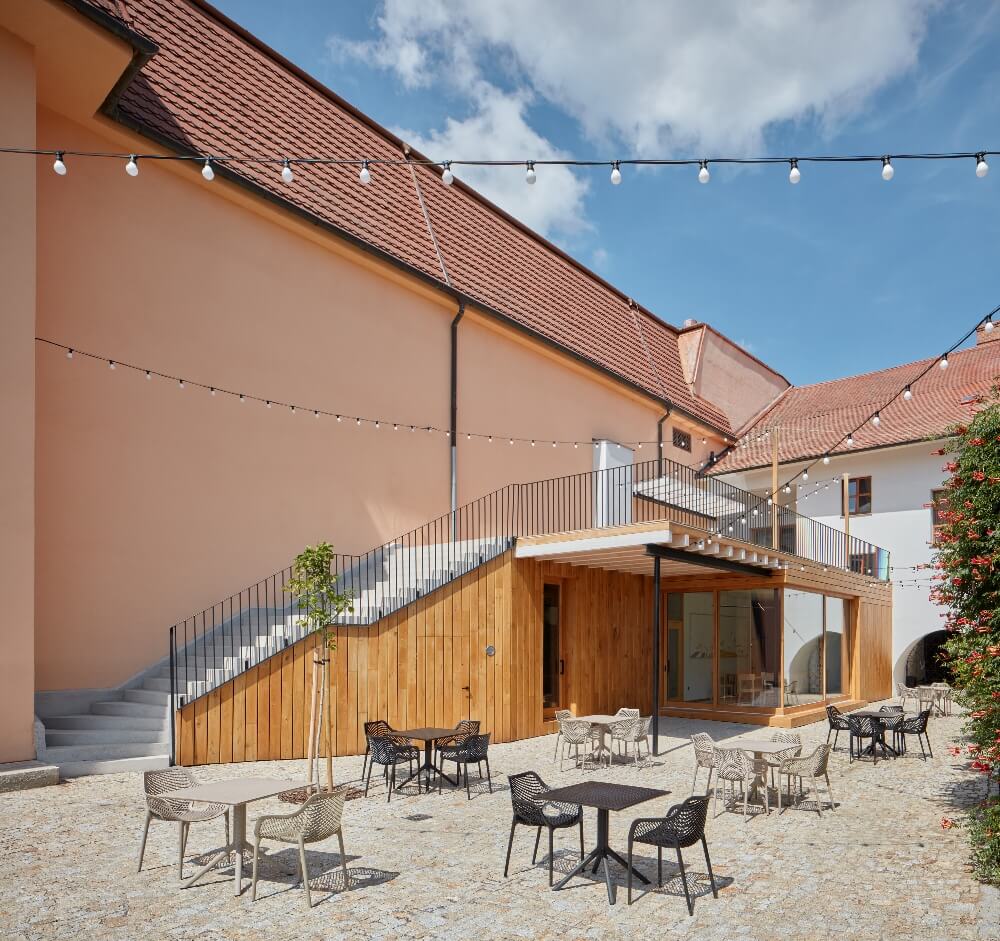 “Such an ambitious program forced us to make use of every centimetre of all levels of the townhouse, its courtyard and the cellars,” say principal architects Jan Veisser, Jan Hora and Barbora Hora. Overall, the project encompasses some 110 square metres of gross floor area. The extension into the courtyard sits in the footprint of a former wing that had been destroyed during World War II.

Leading to that courtyard is a restored covered passageway that serves as the winery’s new primary entrance. Indeed, say the architects, it’s “the crossroads of all operations.” Featuring cobblestones underfoot and whitewashed vaulted ceilings above, the corridor is also where winemaking tools and technology are warehoused, the wine matures in Georgian kvervi (stemless ceramic vessels normally planted in the ground) and overnight guests access the accommodations on the first floor. 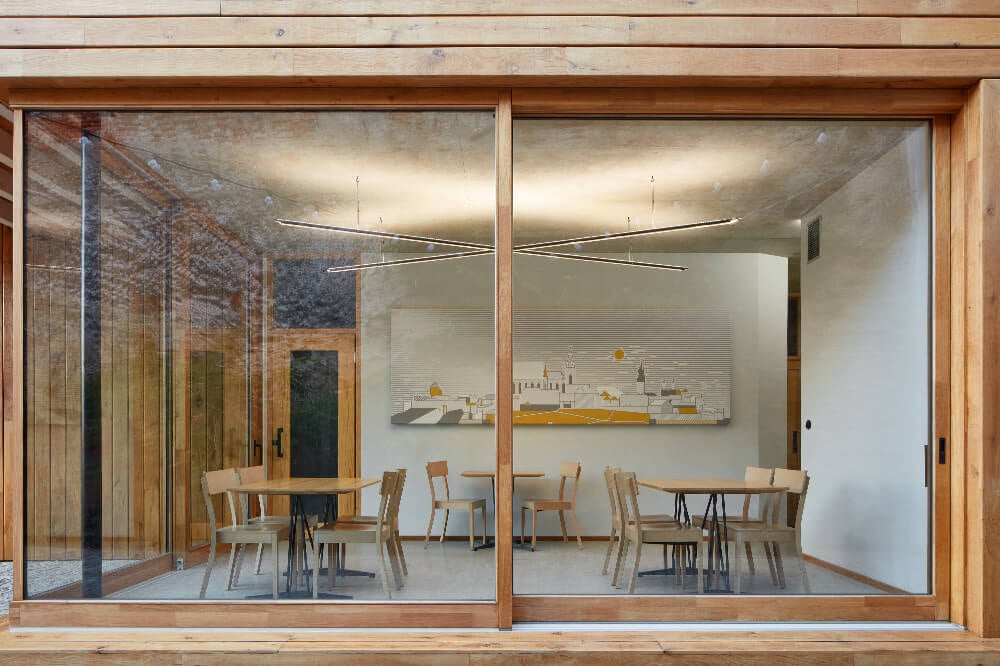 Graphic black-metal ceiling lights illuminate the way from the passage’s rustic wood entry doors to a handsome grille-style gateway that ushers visitors into the courtyard. 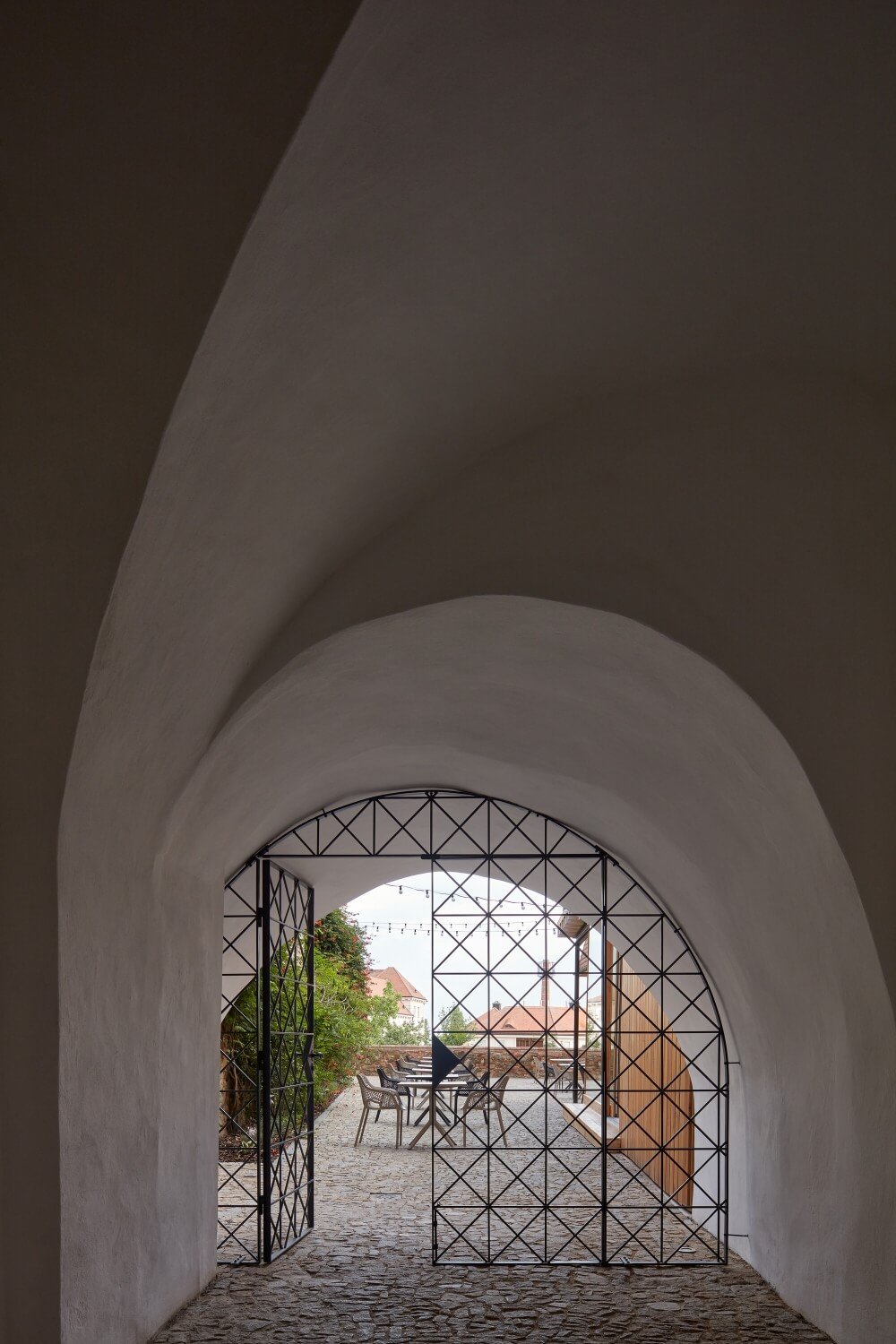 A narrow plot wedged between a pair of high walls, the yard is bordered on one side by the weathered stone exterior of a former Capuchin monastery and on the other by the nondescript wall of a disused eighties-era cultural centre. It’s along the latter plane, in the footprint of the destroyed former wing, that ORA installed its modern extension, which houses a small glass-walled pavilion and a discreet new service shed underneath an open-air terrace. 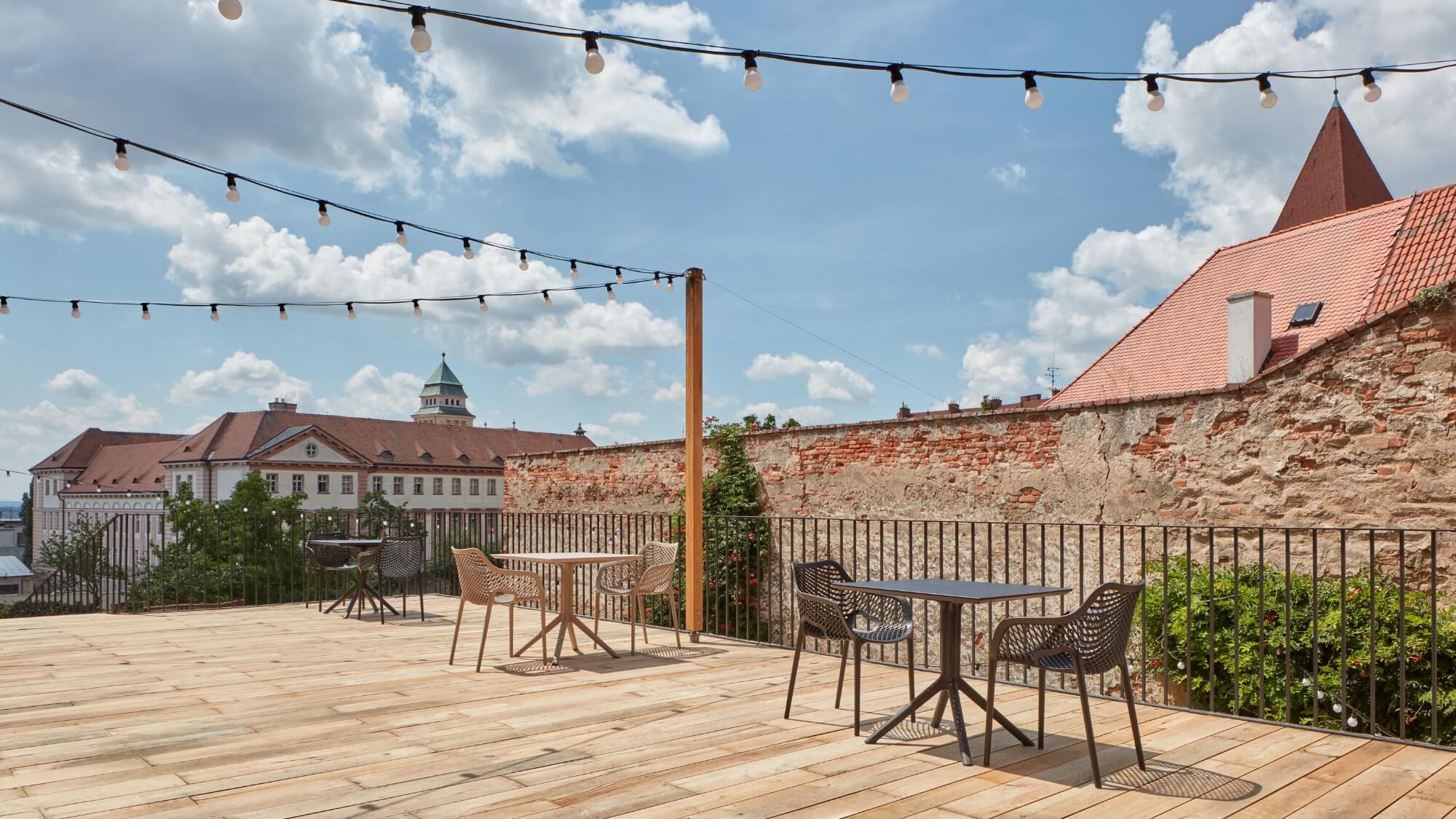 The pavilion is distinguished by clusters of wood and metal bistro furniture, an abstract cityscape on one wall and a sleek, X-shaped lighting fixture stretching across the ceiling. A similarly shaped chandelier dominates the wine bar at the front of the house: Naturally divided into two parts by a pair of cross vaults overhead, the space consists of a seating area lined on one side by a long slatted-wood bench at the entrance and a service/tasting area containing a bottle rack and a work desk and island in the rear. 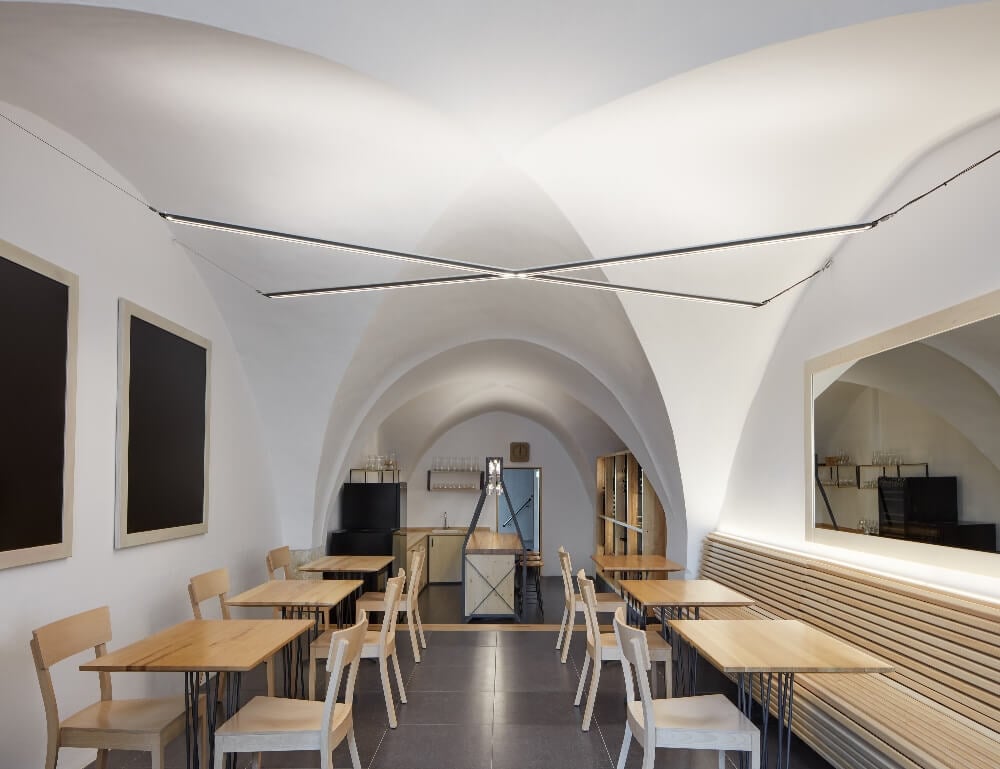 Back in the courtyard, a sanded concrete staircase that widens at its top rises above the new service shed toward a platform offering additional outdoor space and a framed view of the monastery garden and local courthouse beyond. “We designed a contemporary pavilion hidden from the outside [of the complex],” explain the architects, “the roof of which is an observation terrace and an extension of the courtyard space.” 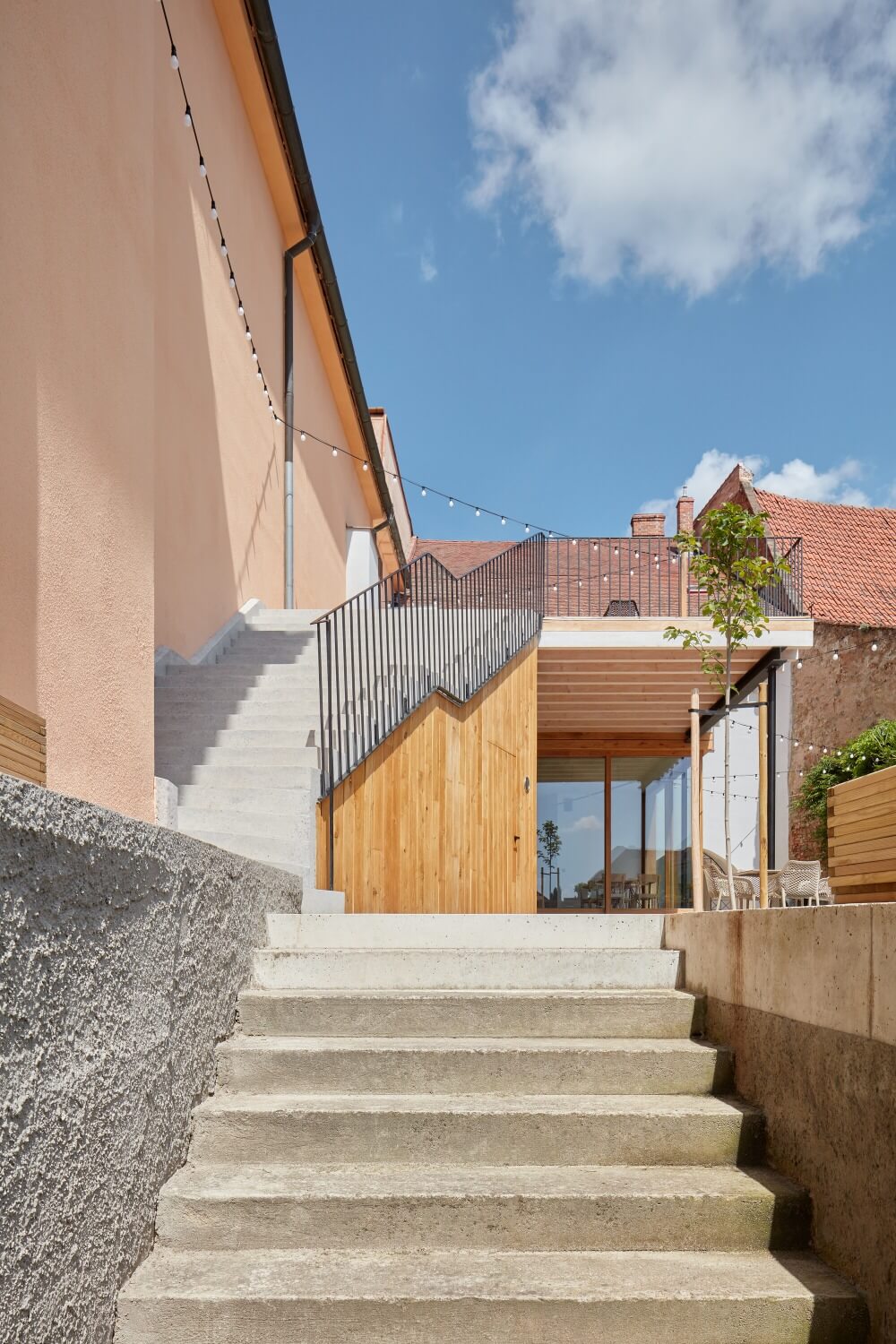 Of the old wing, the only part still extant is the cellars, which were repurposed as the winery’s production centre. “The cellars are entered through a secret door in the facade of the extension,” says OMA. “In order for the underground to retain its authenticity, we left it almost without interference.” 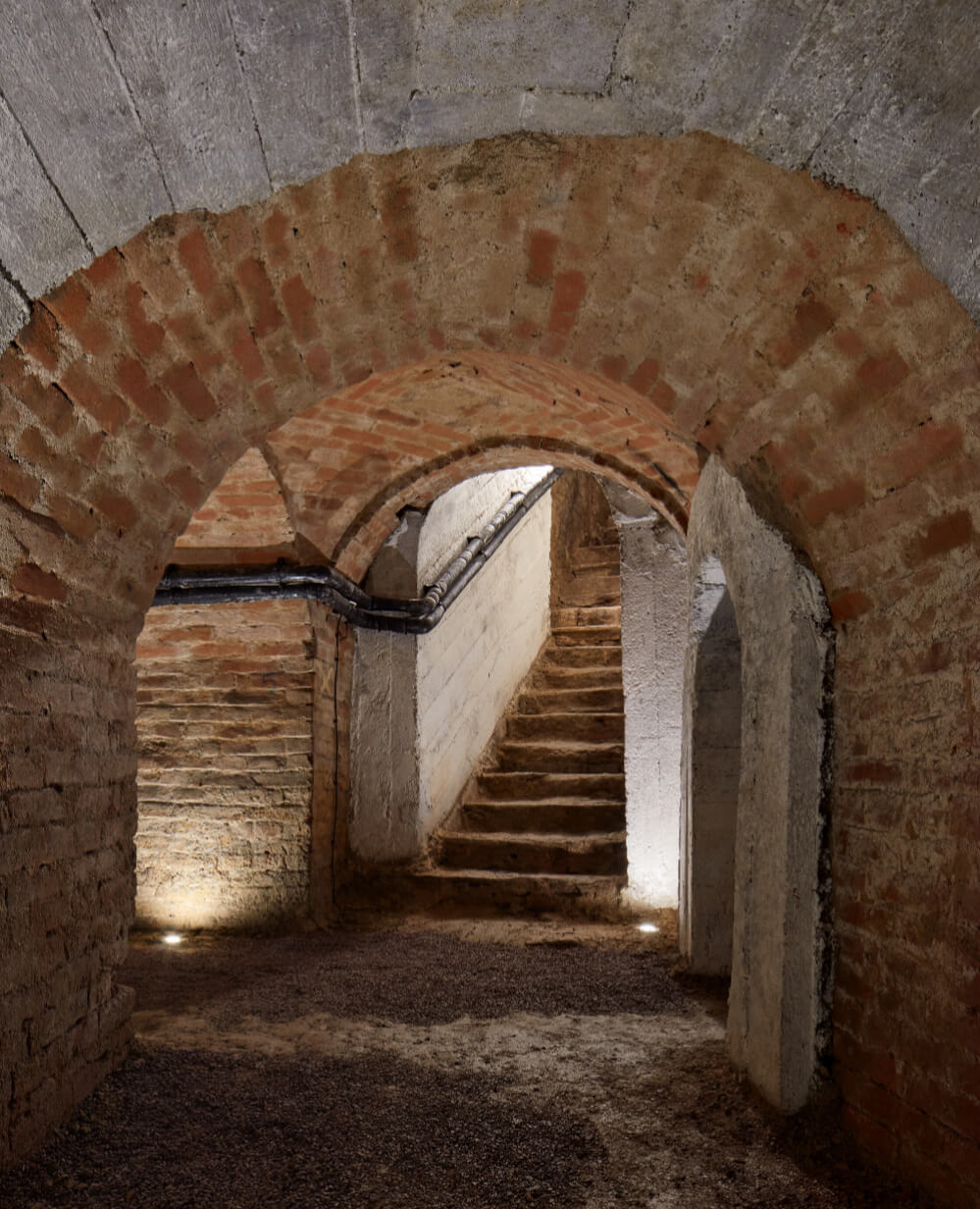 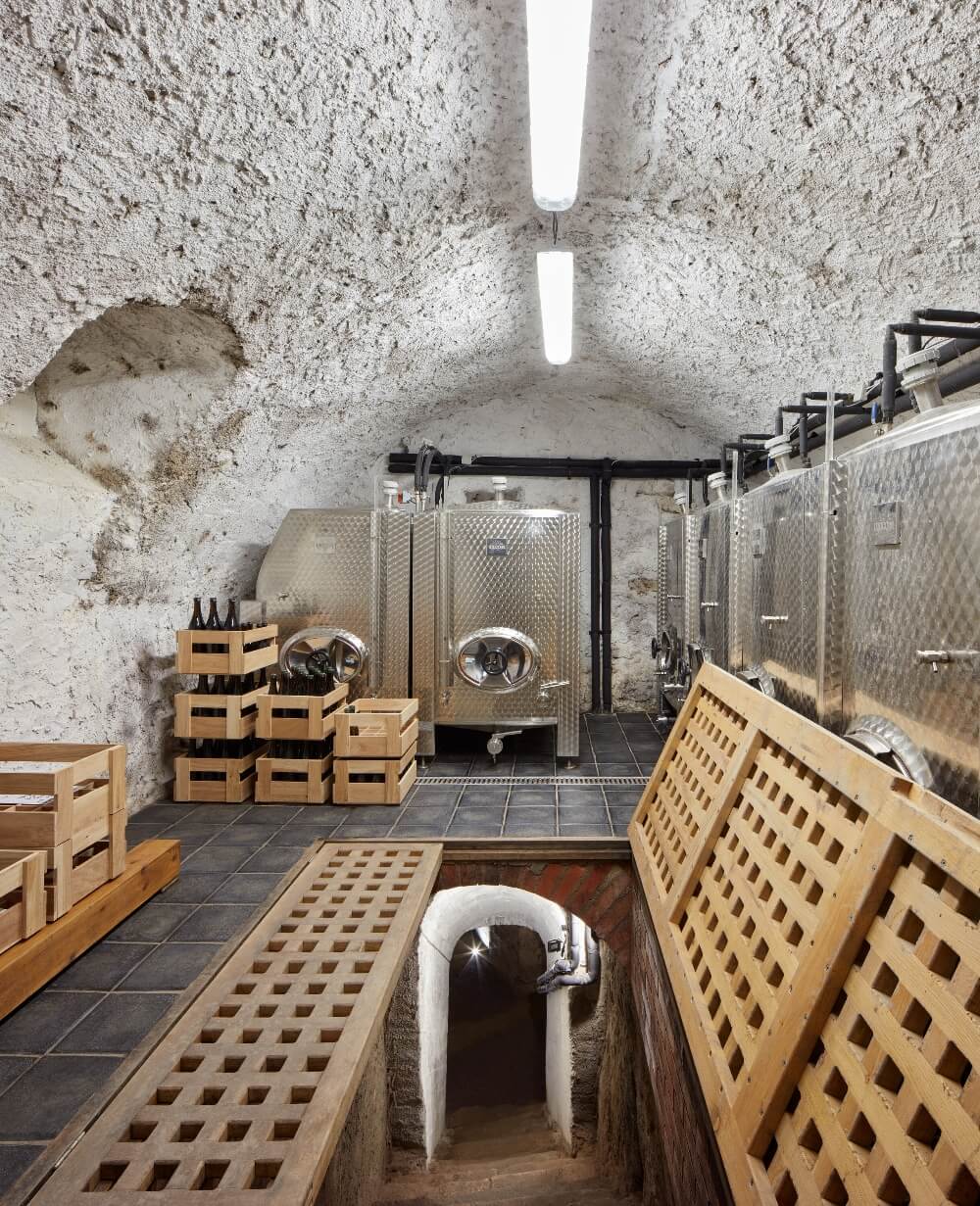 Now, stainless steel tanks occupy the first subterranean level, “this being the main production area of the winery,” while barrels are located on the second floor.

When the vintner Vlastimil Nešetril approached the studio “with his dream of creating a prosperous winery in the heart of Znojmo,” the task, say the principals, “was to create a place where wine would be produced, sold and tasted,” as well as accommodate “feasts, events and [overnight] guests.” 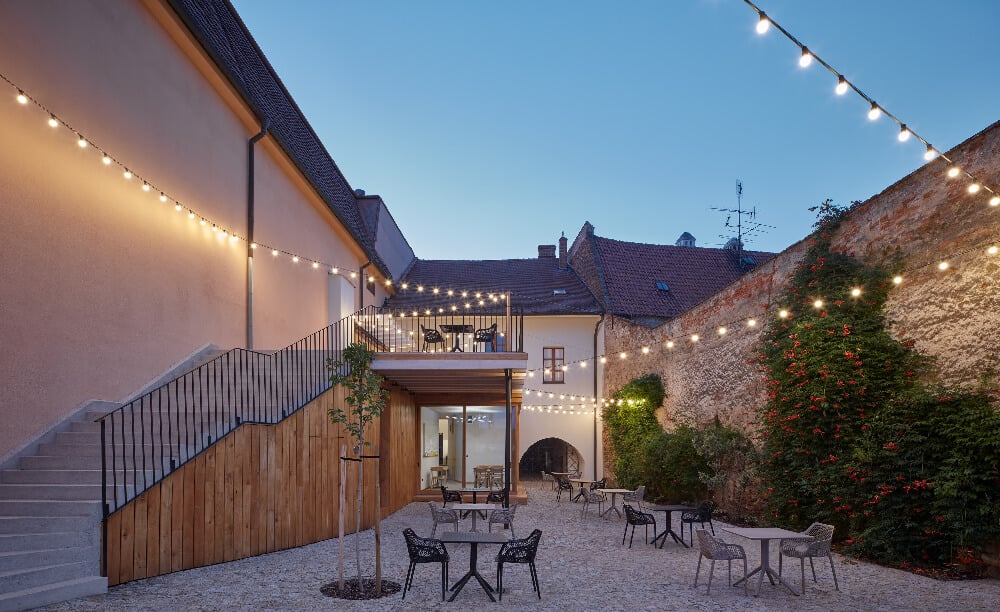 On that score, the young firm has more than fulfilled its mandate, designing a forum not just for savouring wine, but for drinking in the process behind it, too.