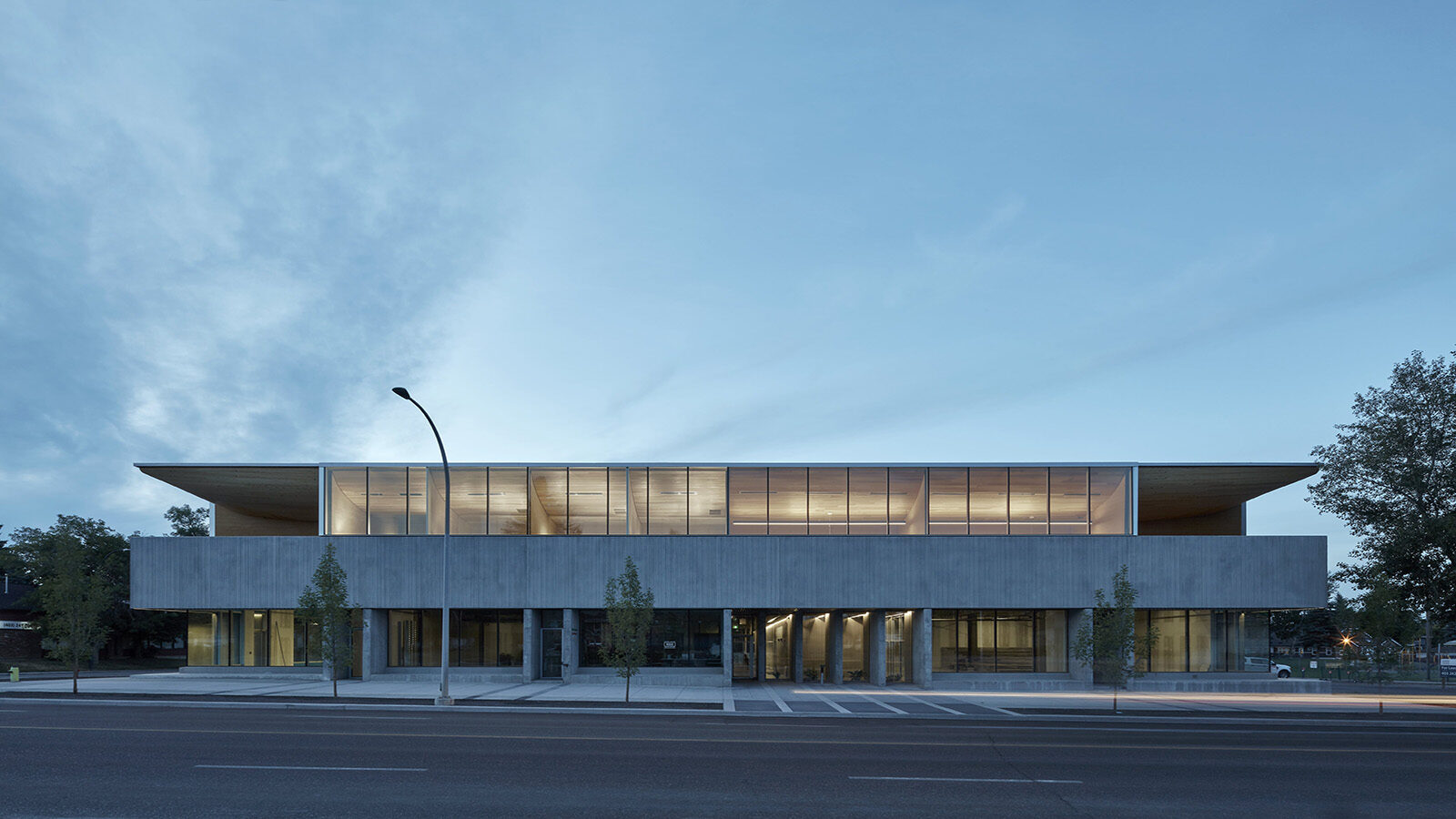 A Calgary Dermatology Clinic Lights up from Within

Over the last decade, Manitoba’s 5468796 Architecture has staked a singular presence in Canada’s architectural landscape. Take Winnipeg’s instantly iconic 62M residences, a building idiosyncratically adapted to its unconventional site, or the city’s ongoing James Avenue Pumping Station revitalization, which artfully transforms a vacant industrial building with a dense, cantilevered residential community that leaves architectural heritage intact. While both projects are exuberant departures from the norm, the designs are functional and practical, with as much contextual sensitivity as aesthetic flair. In Calgary, the newly completed Beacon Clinic is a quieter — but equally compelling — entry to the canon. Both a retail hub and a healthcare space, the building shirks commercial and institutional typologies to create a compelling new hybrid.

Anchored by a medical and aesthetic dermatology clinic, the two-storey complex was built from the ground up to serve as a mixed-use development: retail spaces occupy the ground level, while the clinic makes its home on the upper floor. The health-oriented 2,350 square-metre build is an imposing presence off one of Calgary’s main arteries, but what lies behind its facade is a feat of sensitive, human-centred design. 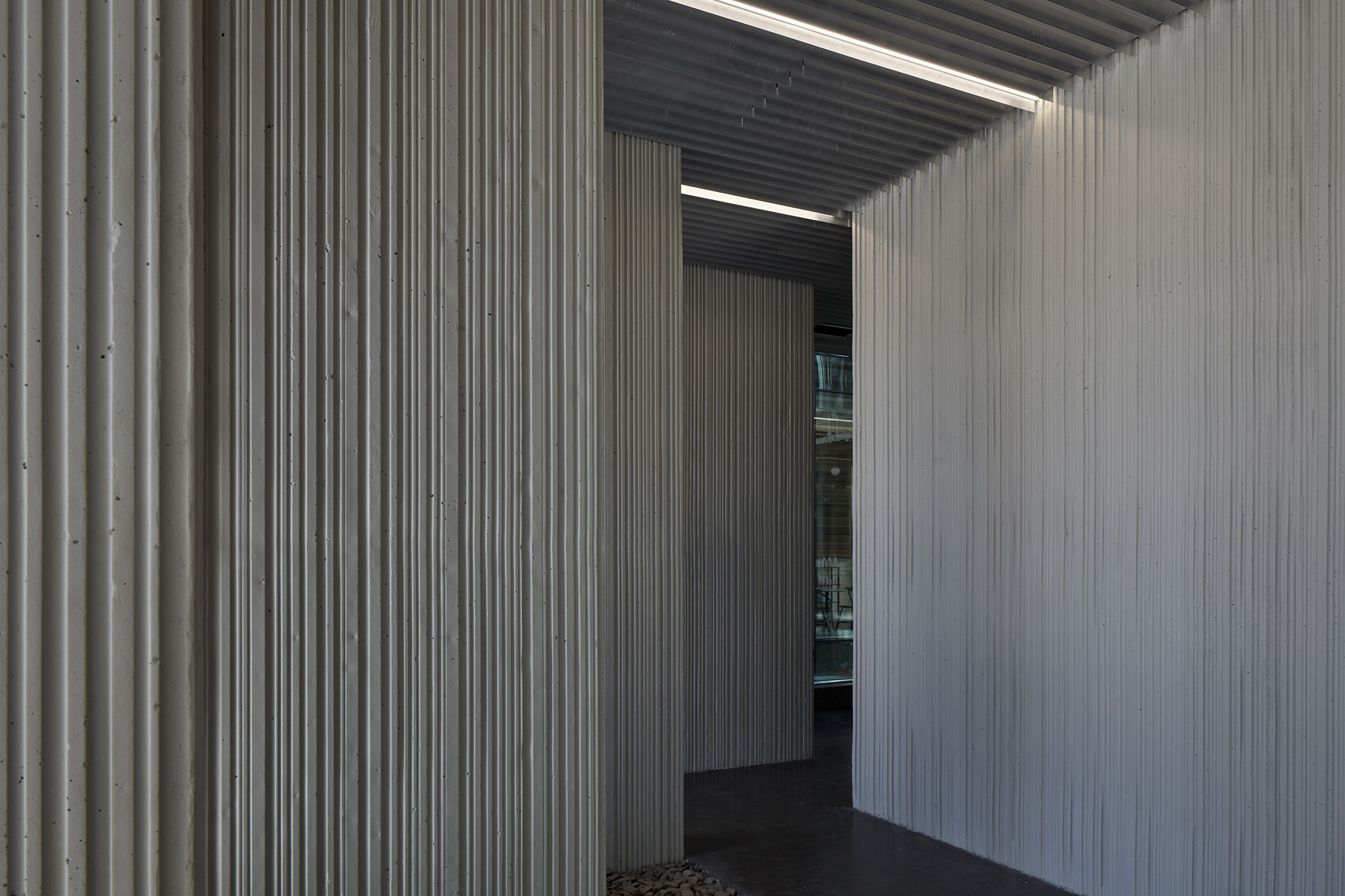 Two opposing elements were at play in the building’s orientation — the clinic had to maintain its clients’ privacy, while also allowing natural light into the space for precise patient assessment and treatment. Unobstructed floor-to-ceiling windows weren’t an option; the firm had to find other ways to bring in the light. 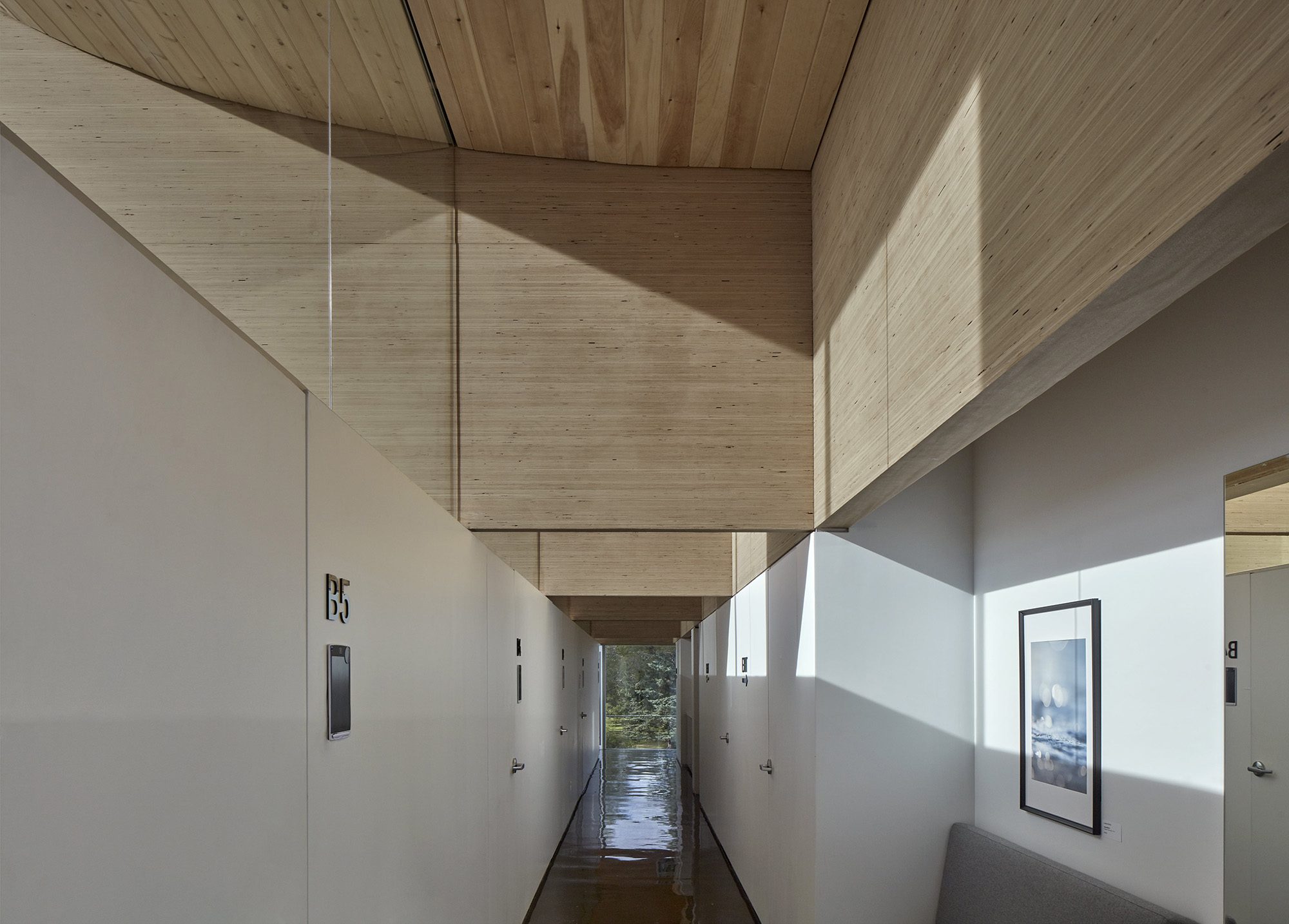 One answer: A protective concrete veil, installed around the building’s perimeter, shields it from direct sunlight and inquisitive gazes, and acts as an acoustic barrier providing relief from the hum of nearby 17th Avenue. The pursuit of natural light also led the architects to include various light modulation techniques throughout the design, with strategically placed skylights, cut-away balconies and clerestories streaming indirect sunlight into the expansive space. 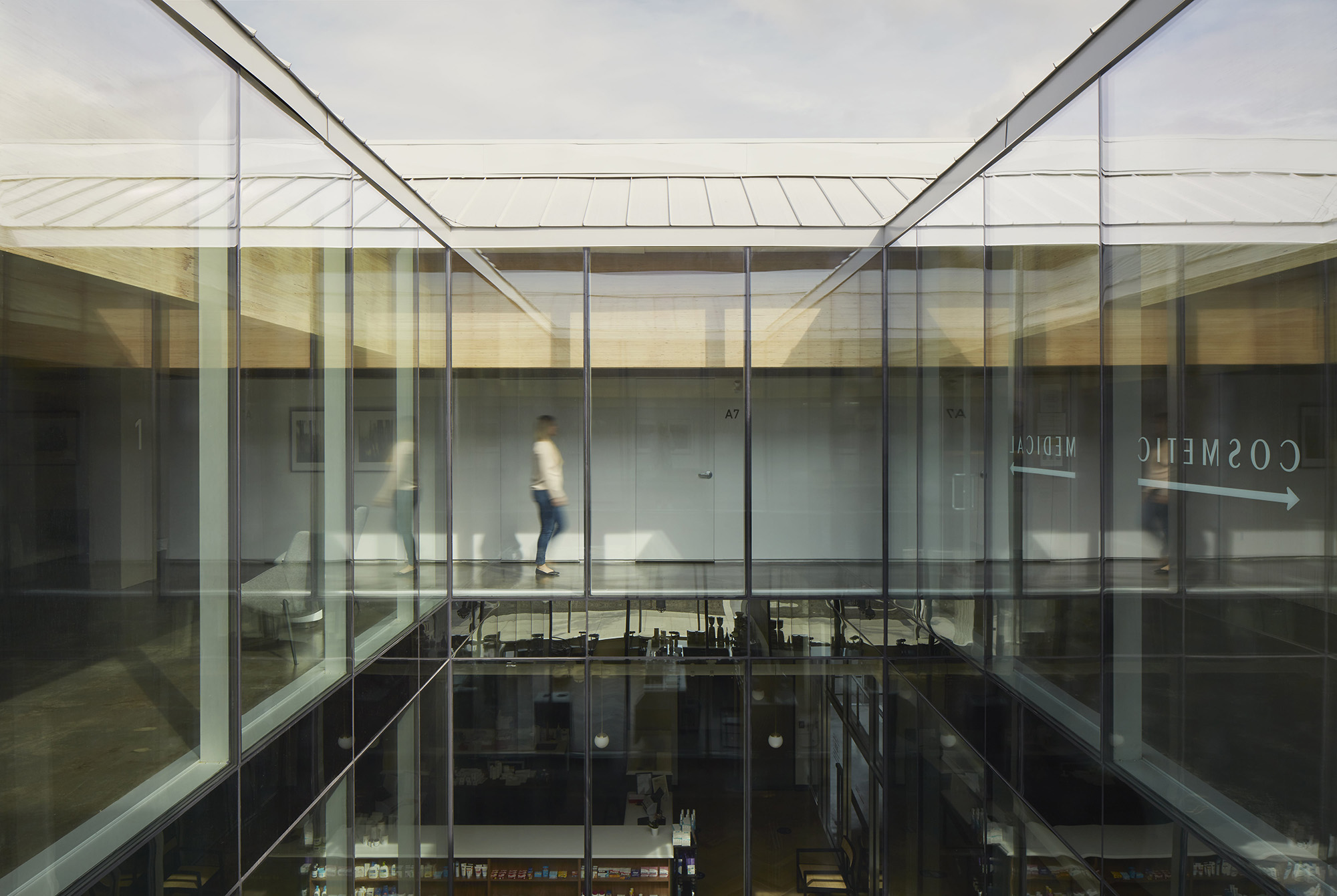 And then there’s the central courtyard, which carves another lightwell into both floors of the building — and even the underground garage. Tall boreal vegetation will be planted within the compact space, immersing the clinic in vegetation. Extending through the building’s core, the centrepiece does double duty, enlivening the indoors with plant life as well as providing a natural glow. 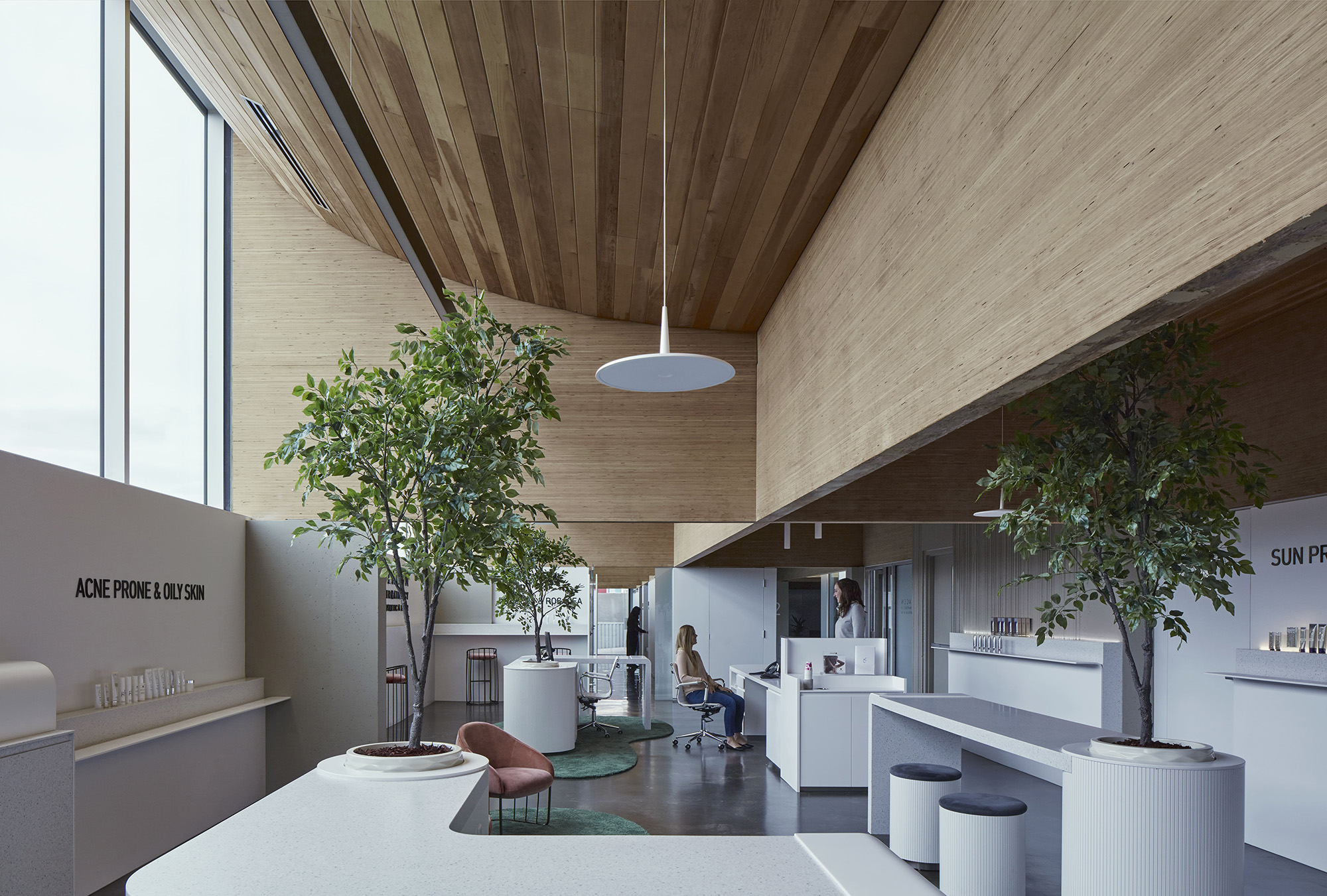 Inside, sleek, rounded benches, desks and stools in neutral colours make up the bulk of the interior decor — a simple approach that preserves a feeling of openness. The height of the ceilings also ameliorates the claustrophobic ambiance that defines some healthcare spaces, which typically necessitate a rigidly partitioned layout. 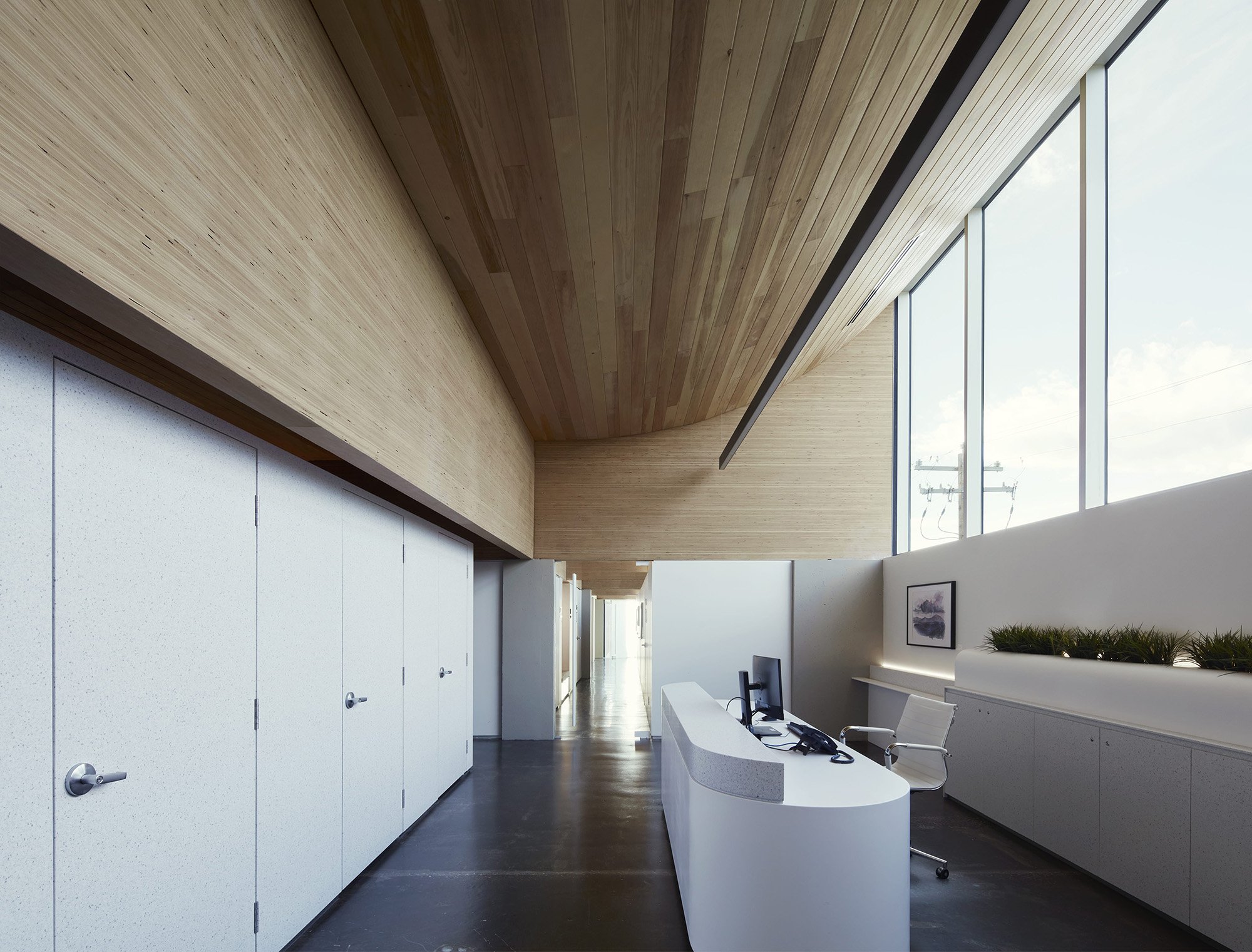 On the upper floor, a system of wood beams delineates spaces in the clinic. Aware that patients would be spending much of their time on an examination chair, the designers made sure that the high-coffered ceilings would give them a pleasant vista. In place of the usual acoustic tiles, the ceiling’s surfaces diffuse the clerestories’ light across a two-metre threshold. Hundreds of micro-layers of laminated wood make up these wood beams, which reach down from the ceiling. 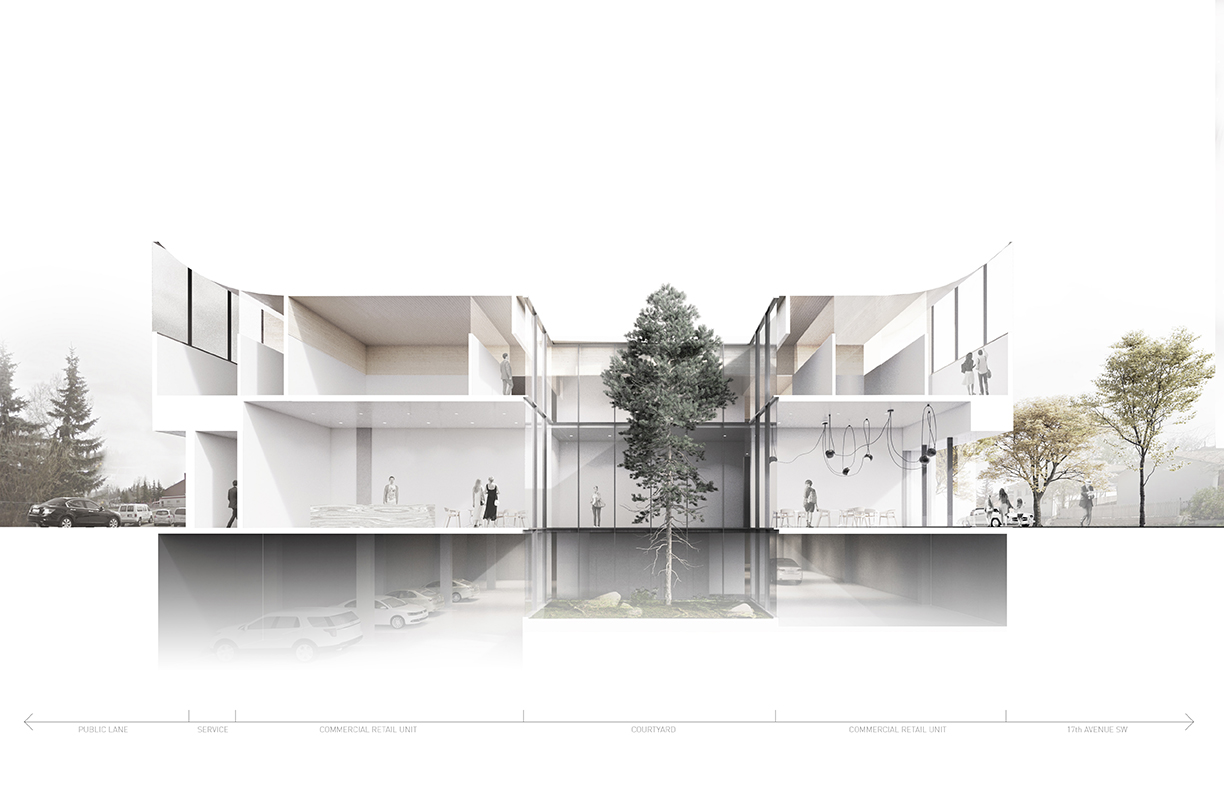 A healthcare space that eschews institutional norms, 5468796 Architecture’s Beacon hosts a warm and inviting ambiance behind its elegantly monolithic facade.