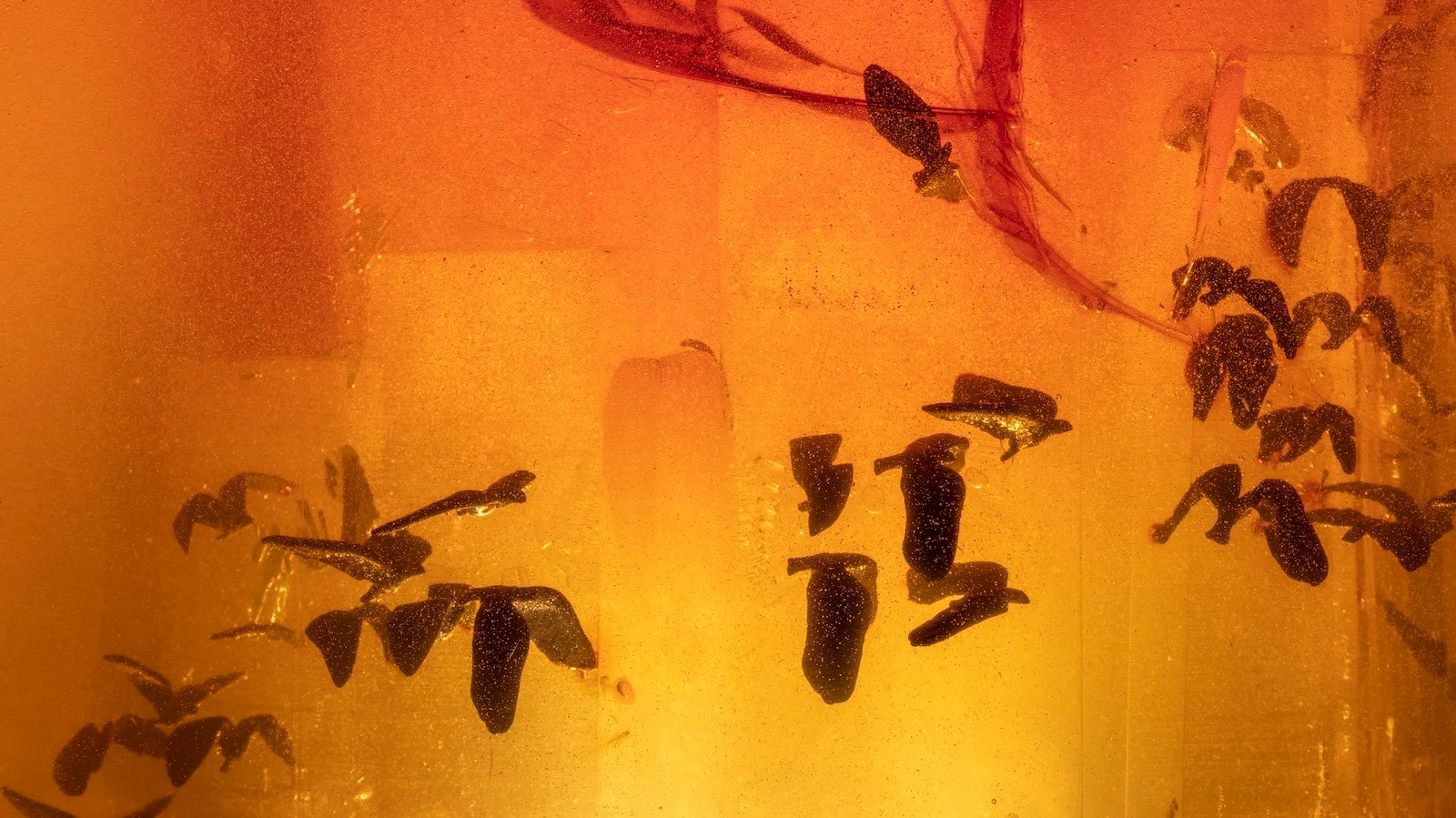 In Dubai, Kanva Mines the Depths of the Climate Crisis

Opportunity. Mobility. Sustainability. Corollaries to the unifying slogan of “Connecting Minds, Creating the Future,” the three sub-themes of Dubai’s Expo 2020 addresses some of today’s most pressing global issues. From the multiplying catastrophes of the climate crisis to the increasingly glaring realities of inequality — as well as a timely focus on human mobility and the future of transport — the ongoing fair is billed as an optimistic “festival of human ingenuity” that promises to “tackle the greatest challenges and opportunities of our time.”

It makes for some spectacle. Opened this month and on until March 2022, the Expo (originally slated for last year) is housed in a collection of architectural marvels, with 192 national pavilions stretching across a 1,000-acre site between Dubai and Abu Dhabi. In addition, three marquee pavilions — devoted to each of the sub-themes of opportunity, mobility and sustainability — round out the show, bringing another dose of glamour to the Persian Gulf. 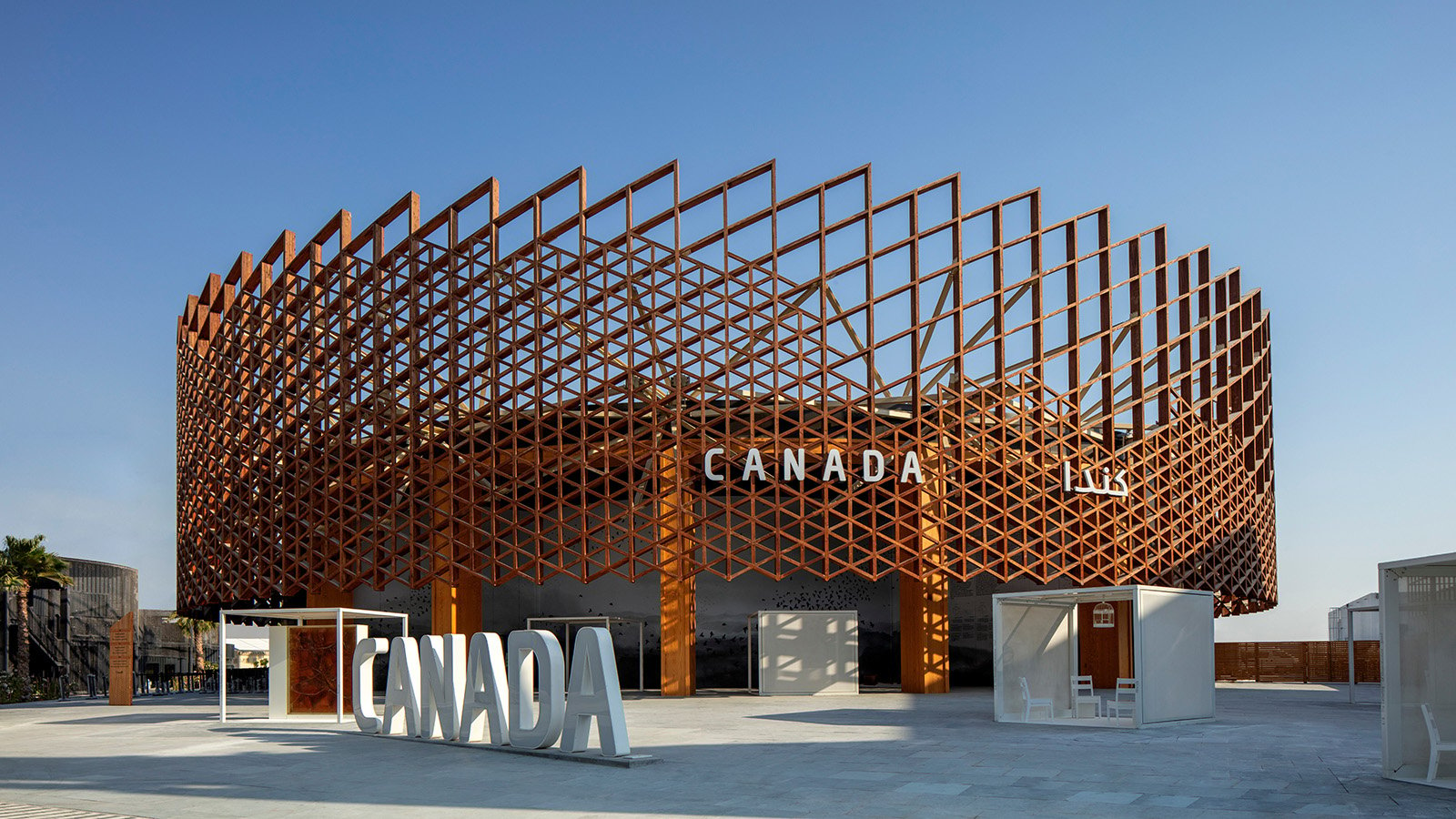 Since well ahead of opening day, however, Expo 2020 has faced criticism. While the necessity — and carbon cost — of mega-events like World Fairs and Olympic Games is increasingly under question, the UAE’s human rights record remained in the spotlight. According to Human Rights Watch, the Expo’s glossy narrative is at odds with an economy reliant on the exploitation of migrant workers and a regime hostile to democracy and civil society.

The Expo’s sheer sprawl and architectural extravagance also undermines its commitment to sustainability. The spectacular Sustainability Pavilion is an acute case in point: the enormous embodied carbon footprint of Grimshaw’s design (all 17,850,000 kilograms of it) presents an uncomfortable riposte to the building’s mandate of teaching “how we can change our everyday choices to reduce our carbon footprint and environmental impact.”

Amidst the debate and pageantry, Canada’s contribution to the Expo is decidedly understated. Designed by Toronto’s Moriyama & Teshima, the 1,300-square-metre Canadian pavilion is a comparatively modest structure — its wood-lattice design hints at Arabic mashrabiya architecture and its circular form conveys “a universal symbol of unity.” Flanking the pavilion, an exhibition by Montreal’s Kanva invites visitors to confront the evidence of climate change and habitat destruction.

Scattered across the Canadian pavilion grounds, Kanva’s “TRACES” comprises eight volumes, each of which houses a sort of “white box” museum in miniature. Conceived as a journey, the exhibition’s narrative is woven together by a motif of fossilized birds: Seemingly encased in amber, flocks of birds are suspended in lifeless flight, immortalizing a bygone habitat. A poetic counterpoint to the relentless pace of anthropogenic destruction, the installations create stillness from a transitory moment, fostering an uncomfortably extended confrontation with everyday catastrophe. 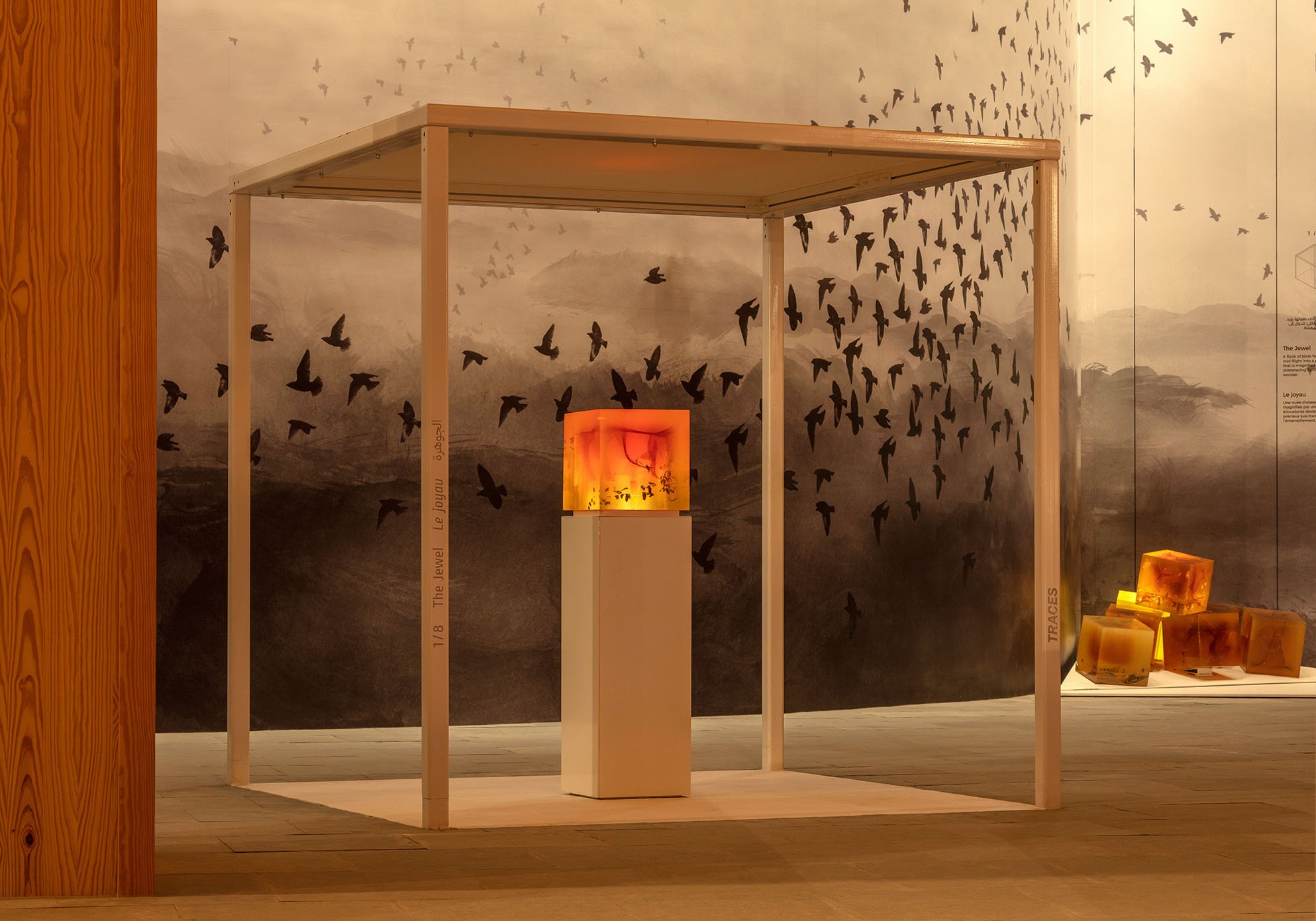 Each of the eight boxes hosts a distinct experience, beginning with a simple pedestal (The Jewel) that elevates the tableau to an object of troubled beauty. From there, the various spaces create moments of close confrontation (The Nearness), elegiac tribute (The Fallen) and conversation (The Gathering). While the communal spaces invite a sense of collective responsibility, a more private setting (The Seat) begins as a moment of personal reflection. Here, the visitor sits alone at a desk that invokes a sense of personal responsibility. When the desk drawer is opened, however, a 3D-printed bird emerges from the hidden corporate hell-scape of an oil spill, struggling for survival. 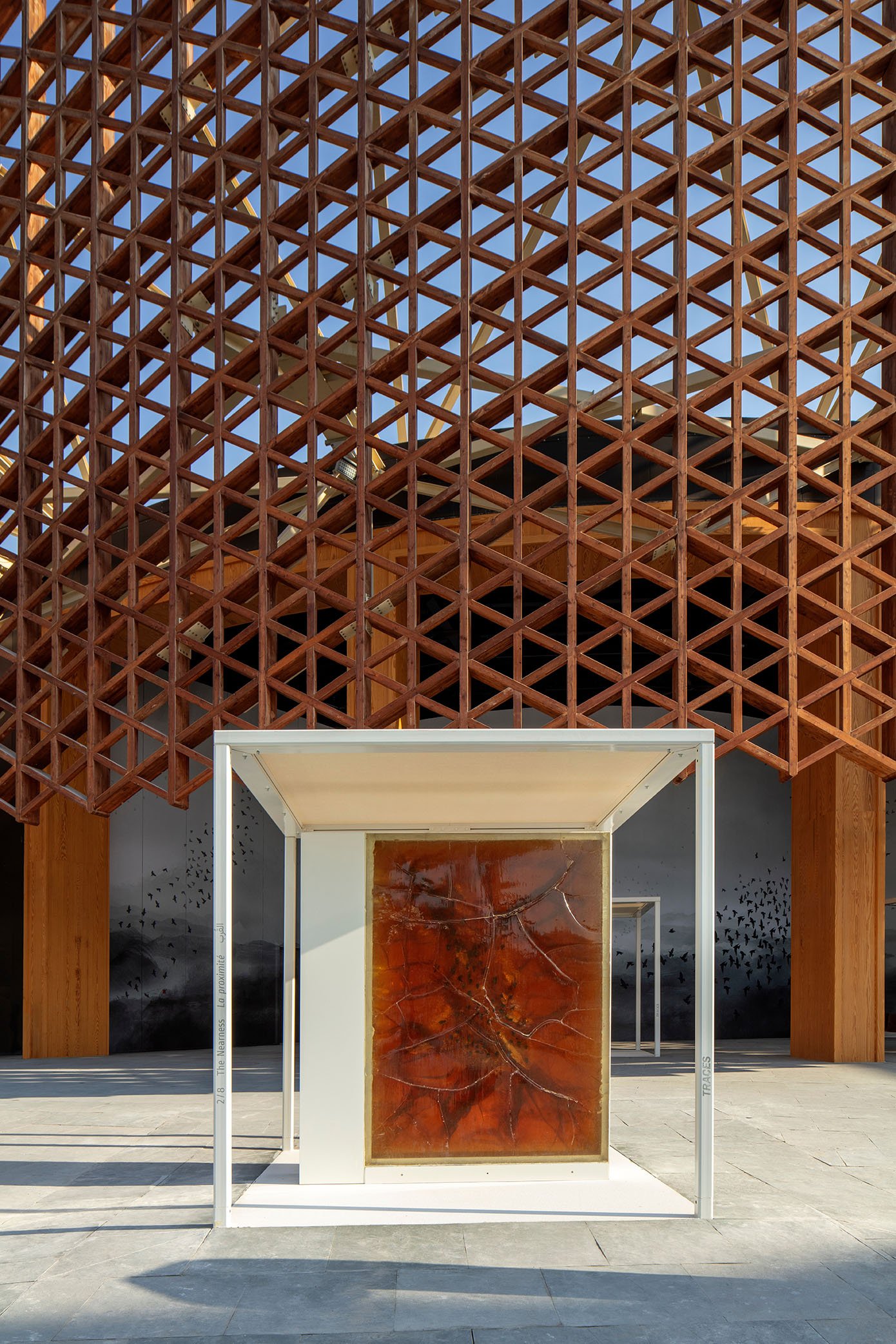 Inviting a multiplicity of perspectives (from the personal to the collective and structural), the exhibit’s contemplative spaces memorialize the fleeting moments, banal and beautiful, of a planet in despair. According to Kanva architect and senior project lead Olga Karpova, the meditative boxes attempt to preserve bygone — and easily forgotten — Canadian landscapes and habitats. “They are simply erased from memory, and our collective amnesia allows us to persist in their destruction,” Karpova says. “‘TRACES’ reinterprets that cycle by fossilizing the species to ensure that it is not forgotten.” 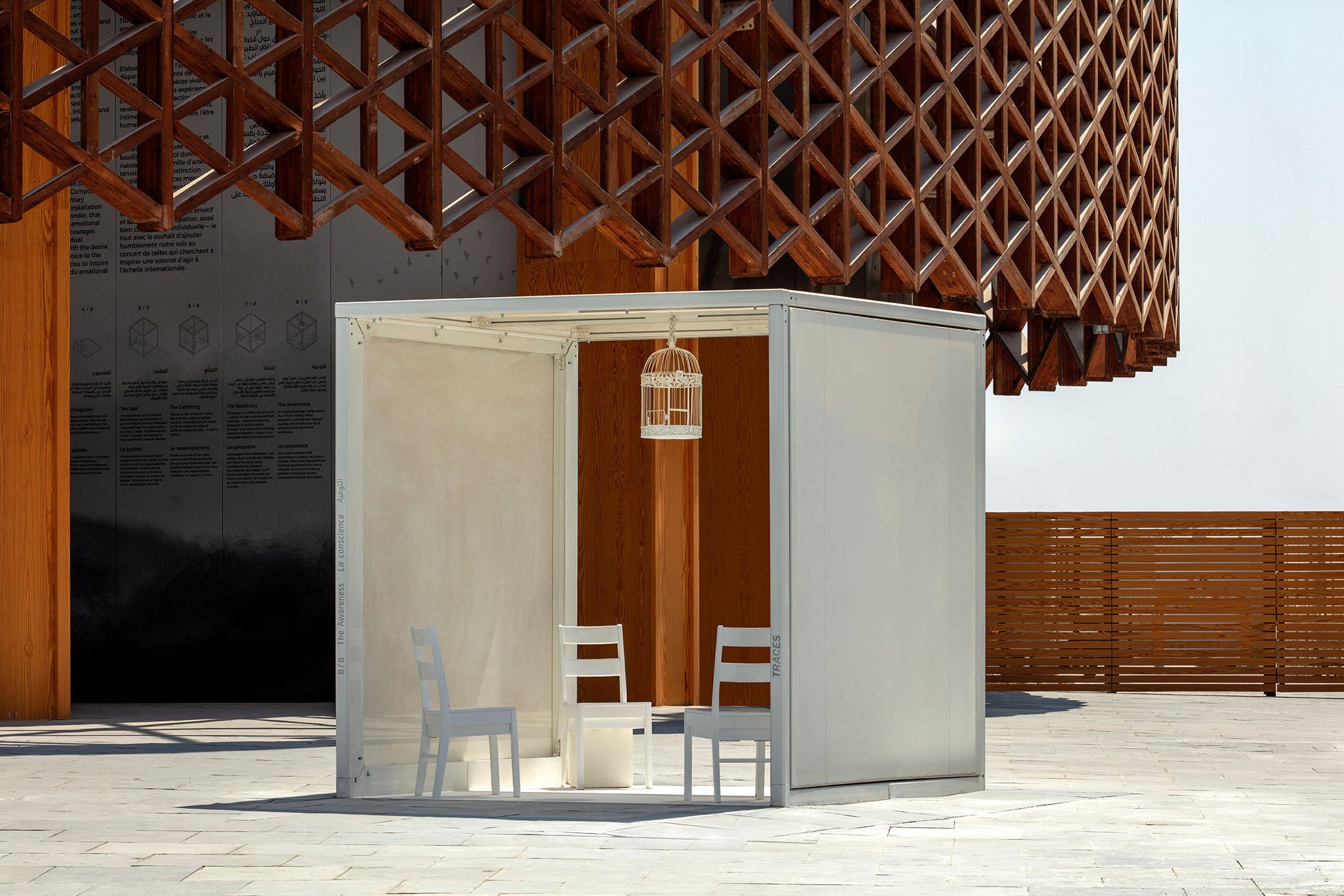 Inside the pavilion, a mural of flocking birds set in a post-anthropocene world completes the journey, with the lion’s share of the building given over to a more generic exhibit — titled “The Future in Mind” and also available online — extolling Canadian virtues to the world. Paired with Kanva’s thoughtful installations and Moriyama & Teshima’s tactfully discrete architecture, however, even the more prosaic elements come off almost as a palette cleanser to the Expo’s extravagance.

So chalk up another win for Team Canada? Not for nothing, it’s the sort of international PR we’ve always been good at. But as sustained and vital criticism of the United Arab Emirates shapes the global dialogue, Canada quietly faces a similar reckoning. Like the UAE, Canada is a petroleum powerhouse, with per-capita greenhouse gas emissions that eclipse even our American neighbours. And as human rights abuses in the Persian Gulf command the world’s attention ahead of UAE’s Expo and Qatar’s upcoming World Cup, Canadian companies are at the centre of global mining atrocities, all as the discovery of mass graves at residential school sites across the country lays bare the reality of a nation built on — and perpetuated by — Indigenous genocide. 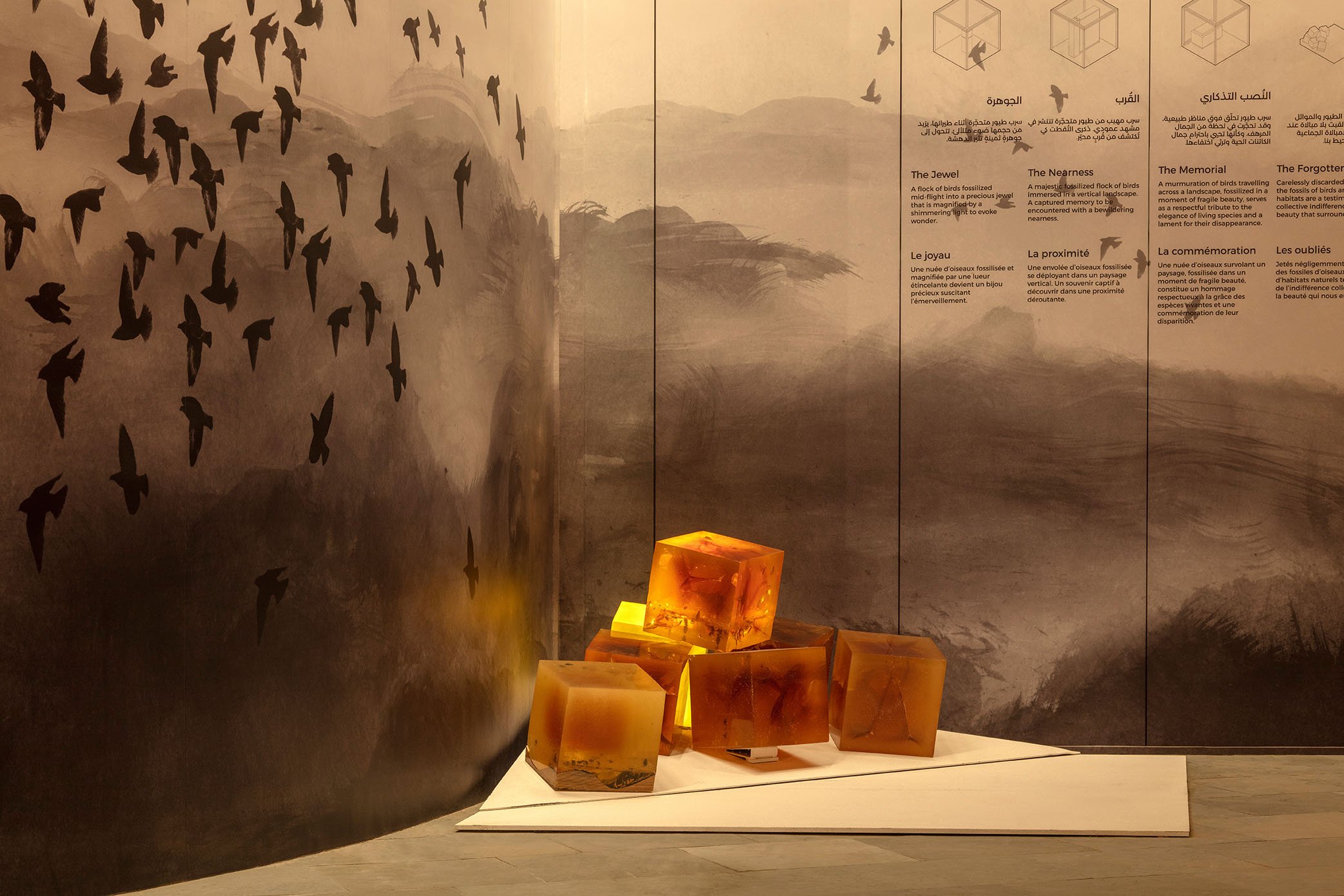 The parallels are hard to ignore — if we’re willing to face them, that is. The UAE’s abuses and atrocities may capture global headlines, but Canada exports a carefully cultivated international image of benevolent humanitarianism and environmental stewardship. It’s a mythos that Kanva’s “TRACES” simultaneously propagates and undoes, championing a Canadian call for action while also centring the country at the forefront of global environmental degradation. When the Expo ends, the exhibition is set to travel the world. I hope it comes here first.