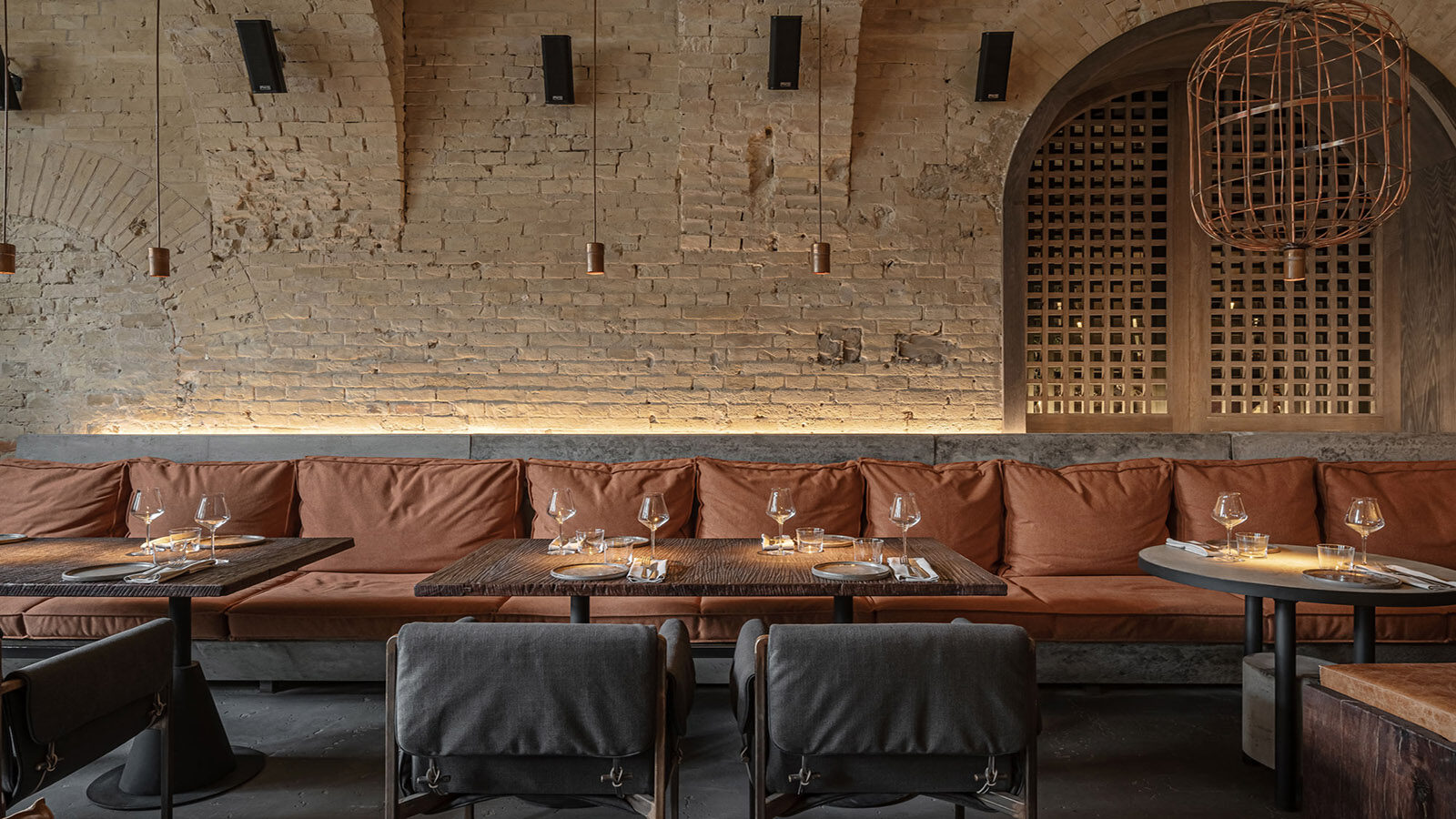 Built in 1764 as a production facility for the Russian Imperial Army, Kiev’s Arsenal factory is one of the oldest of its kind in Ukraine. The building’s history spans centuries — but as of 2017, the public space surrounding Arsenal has been the subject of a fast-paced revival, with restaurants, offices and public spaces rapidly emerging around the former artillery plant. Now, the bygone factory houses a variety of restaurants as well as an art museum in the centre of Ukraine’s capital. Florida and Kiev-based design firm YoDezeen was tasked with revitalizing a prominent part of the dilapidated space, creating a restaurant infused with opulence and levity that nonetheless celebrates the Arsenal’s imposing quality.

The 405 square-metre Izakaya-style bar, dubbed Virgin Izakaya, is the first of its kind in Kiev. Traditionally, the Japanese izakaya is an understated, unassuming eatery, where food is ordered slowly over several courses and service is quick and no-fuss. Like many western variants, YoDezeen’s version is decidedly more luxurious, although it retains some down-to-earth elements.

The textural variety is reinforced in the restaurant’s furnishings and fenestration, which range in material and shape, from round dining tables to semi-oval windows to rectilinear benches. Leather stools and armchairs contrast with fabric-covered and cushioned banquettes and chairs, with a mix of high and low seating proper to the Izakaya tradition. At the front of the space, a trio of large cathedral windows bring in sunlight from a bright and busy courtyard.

Framing the dramatic restrooms, a free-standing red metal mesh structure in the shape of a Japanese shrine (Shinto) appears, as though materializing from thin air. Employing mesh on a large scale to play with transparency allowed the designers to create an uninterrupted flow throughout the restaurant’s large floorplan. “We wanted the elements of Japanese style not to be flashy, but to be incorporated as design solutions,” says Artem Zverer, YoDezeen’s lead architect and co-founder.

Bisecting the large dining room is an open kitchen and bar, made to take centre stage in the middle of the restaurant. With bar seating on either side of the kitchen, patrons can watch their food and drinks being prepared, giving the restaurant a jolt of energy and ebullience. Within a sensuously dim setting, YoDezeen have conjured a restaurant experience of many bright moments.