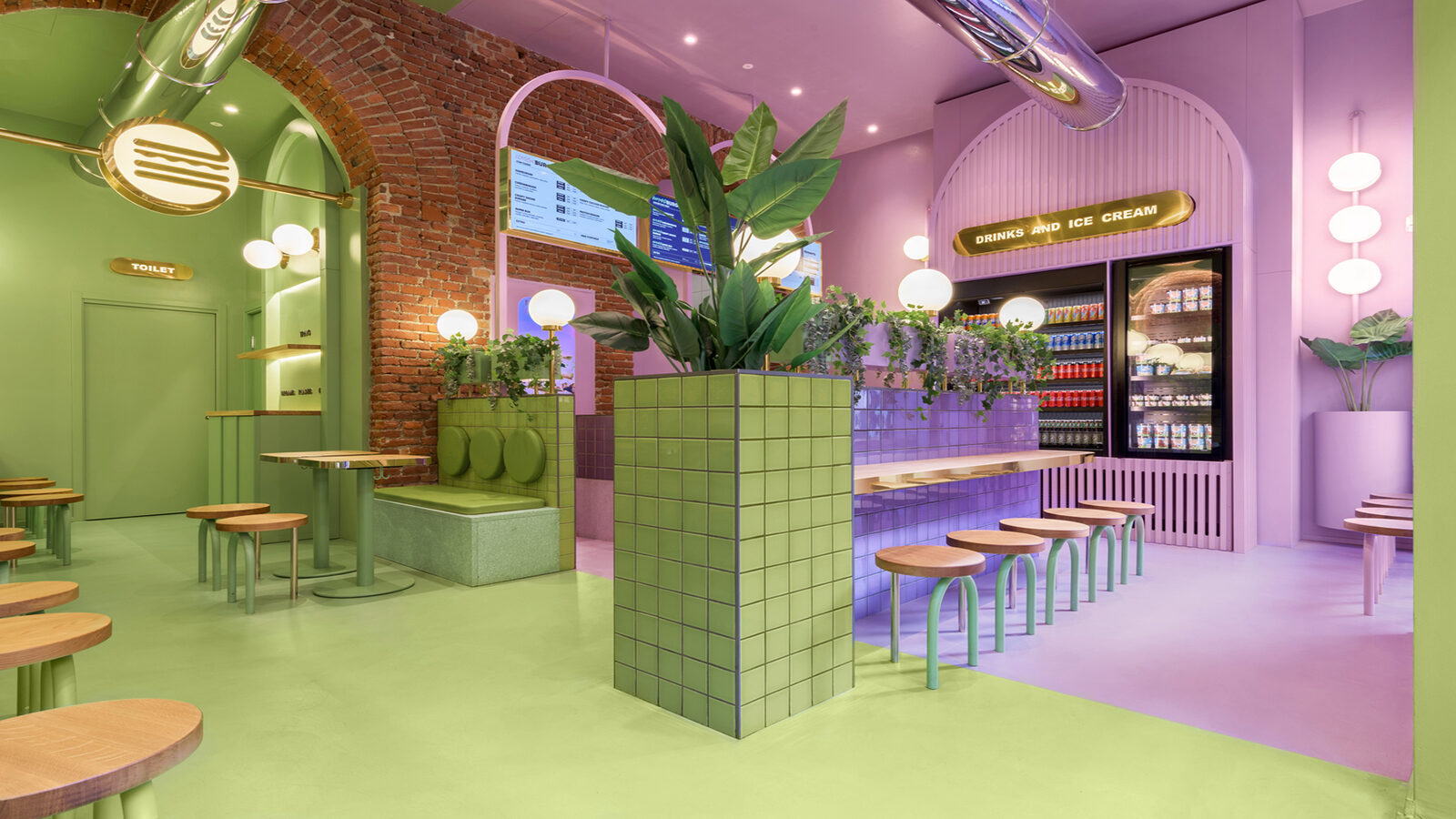 In Milan, A Burger Joint Gets a Flashy Makeover

Spanish designers Masquespacio bring their signature intensity to a hamburger chain in the Lombardian capital.

Grabbing a burger at a dilapidated fast-food joint might be among the few dining experiences — if it can even warrant that title — that we’ve all encountered. Despite a growing trend in hamburger chains in Milan, Valencia-based design agency Masquespacio noticed that many were still adhering to an outdated, industrial aesthetic. On Viale Bligny, in Milan’s Ticinese neighbourhood (known as a bohemian student hangout), the designers endeavoured to devise an aesthetically elevated space for local restaurant chain Bun — a transformation that would turn the quintessential “burger shack” from ramshackle to sophisticated.

Founded in 2010 by Ana Milena Hernandez and Christopher Penasse, Masquespacio has over the past decade communicated an affinity for mixing stellar design and creative branding, which is evident in their notably vivid signature creations. Bun is only the latest of their flamboyant hospitality ventures.

Measuring in at 140 square metres, the space is nothing short of electrifying. Graphic elements harkening back to the heyday of Memphis play with unconventional shapes and forms: colour blocks of chartreuse green and purplish-pink geometrically split the space in half, tiles adorn furniture instead of floors, and tripod stools feature a combination of curved and straight legs. Materials such as laminate and terrazzo tiling reinforce the ’80s vibe — with a contemporary twist.

In collaboration with architect Luca Gobbo, Masquespacio involved themselves in every aspect of the project. From the bulbous light fixtures to the circular wooden stools, whose legs of pastel green meld into the decor, the firm left no stone unturned and no detail unfinished: each dining table’s edges are embellished with a golden finish, echoing the gleaming signage above. The muted tones of the pre-existing brick wall tone down what would otherwise be a shocking colour combination.

Decorative archways punctuate the restaurant’s transitional spaces; wrought in various materials, the structures tie the space together in a composition of sky-high semicircles, while exposed chrome pipes add an industrial feel.

Interspersed throughout, pops of greenery emerge from planters integrated above the banquettes, a nod to Bun’s eco-friendly business model (the restaurant chain vehemently avoids the use of plastic packaging).

Ample seating is made available for guests to stay a while and take in the scenery — and to provide space for experimentation in form and material. The seating arrangement forgoes the traditional banquette-style in favour of individual circular backrests reminiscent of candy dots.

And if the Memphis Group’s playfulness was often deemed “childish”, it’s no surprise that Bun restaurant is endeavouring to attract a youthful clientele. The ultimate goal, says Masquespacio, was to “create a brand identity with a clear focus on the younger generations.” True to the designers’ background and experience, Bun restaurant isn’t just an interior: it’s also an exercise in identity design.

Spanish designers Masquespacio bring their signature intensity to a hamburger chain in the Lombardian capital.