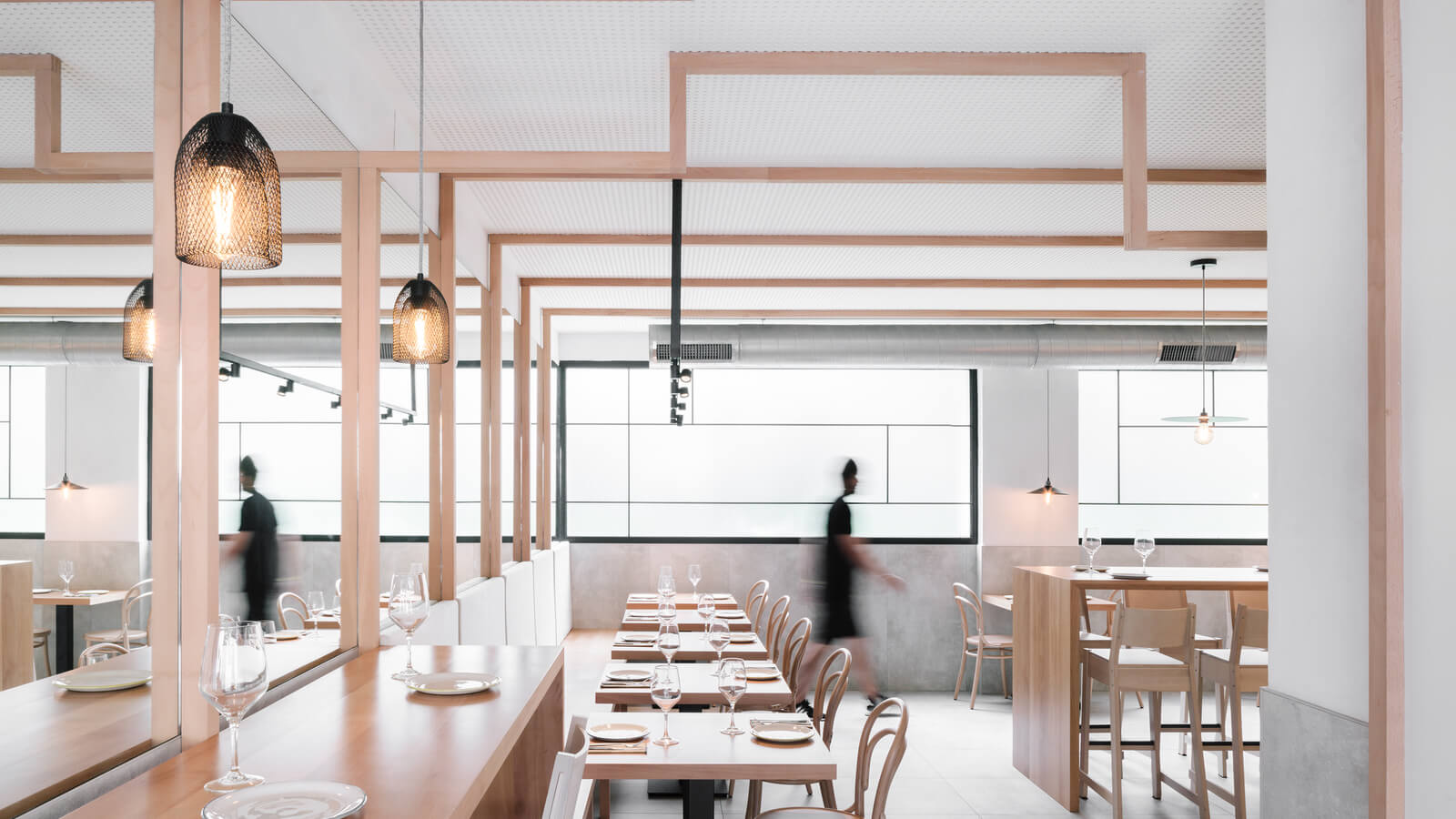 Spain’s culinary landscape is synonymous with a single word —  tapas — for good reason. Originally, tapas were small dishes served to travellers by innkeepers — a gastronomic sample, of sorts from where guests would select which dish they preferred to consume. In the centuries since, the sharable samplers have evolved into an integral part of Spanish cuisine and culture. It’s a tradition that La Hermosa De Alba, a new restaurant in the northern city of Santander, honours with a self-described approach “based on the products of the land.” 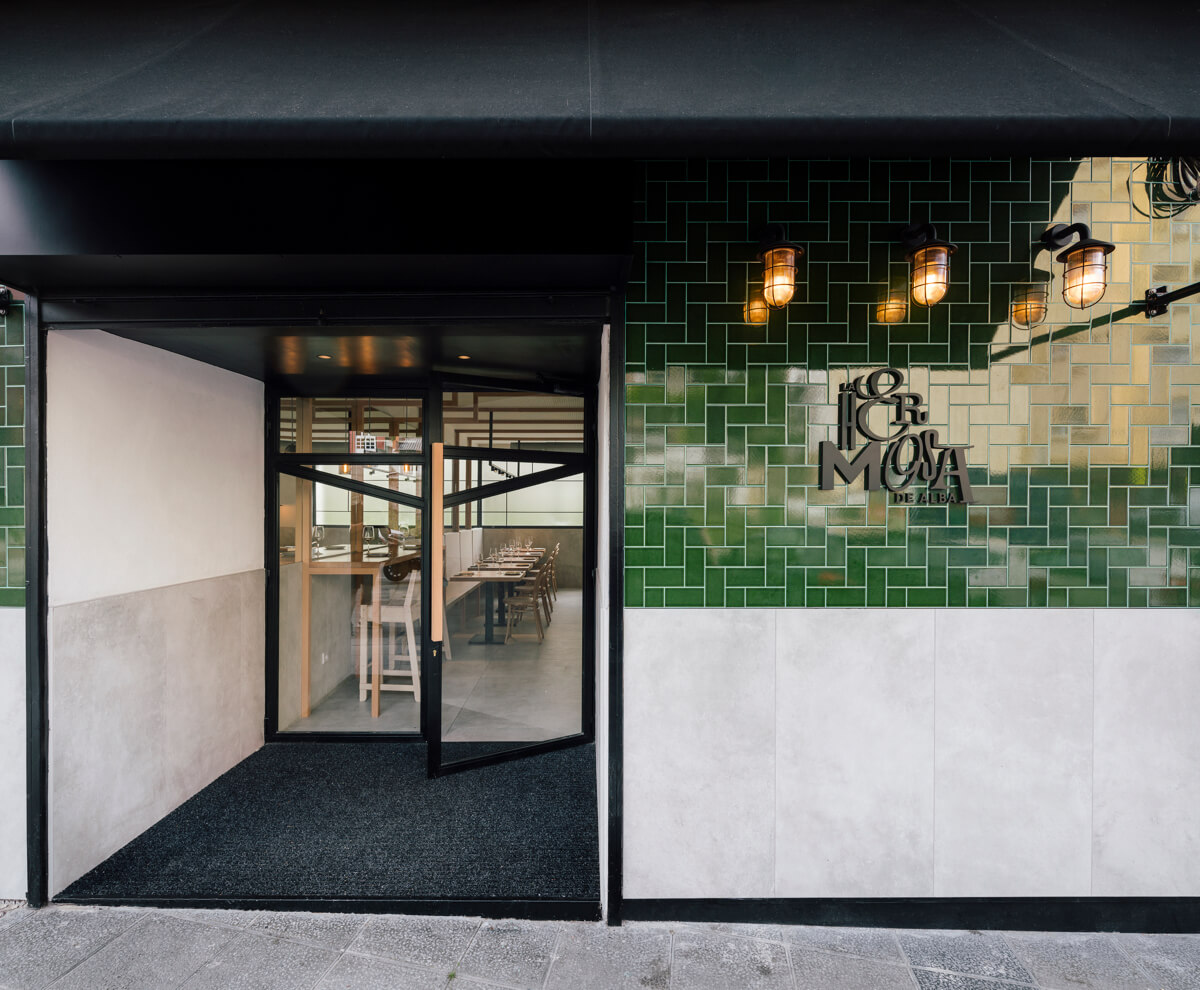 To achieve an environment matching the “casual, innovative and fresh” nature of the food, the owners looked to local outfit Zooco Studio to transform an existing space along the city’s bustling Tetuan street into a refined dining experience. 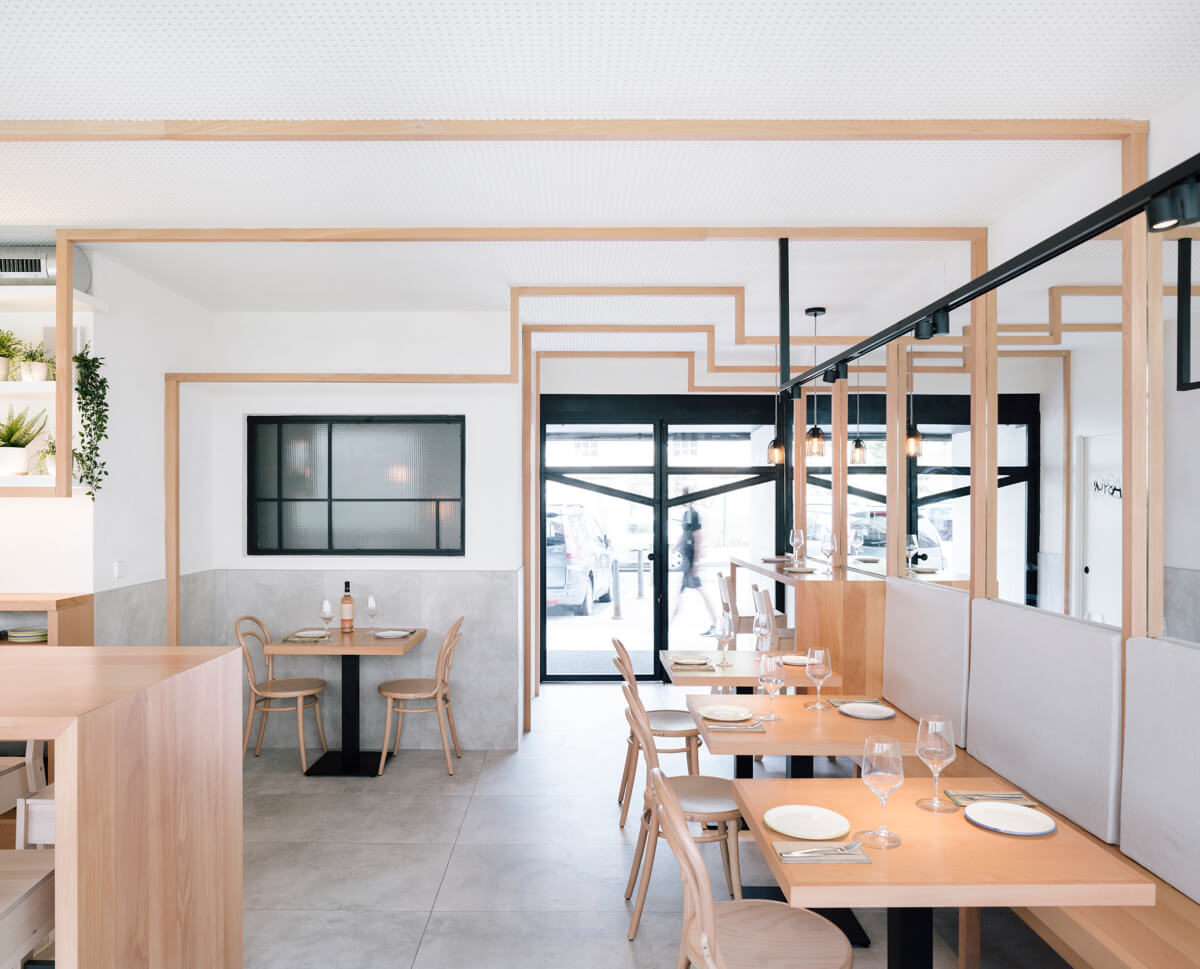 A renovated entrance (complete with an updated facade trimmed in emerald green ceramic tile and sleek black frames) helps usher visitors into the monochromatic interior. A dado of grey porcelain panels connects outside to in, also lining the floor of the entire interior. Set against crisp while walls and paired with a white perforated metal ceiling, the combination – described by the studio as “bright and functional” – puts the chef’s culinary mastery on full display. 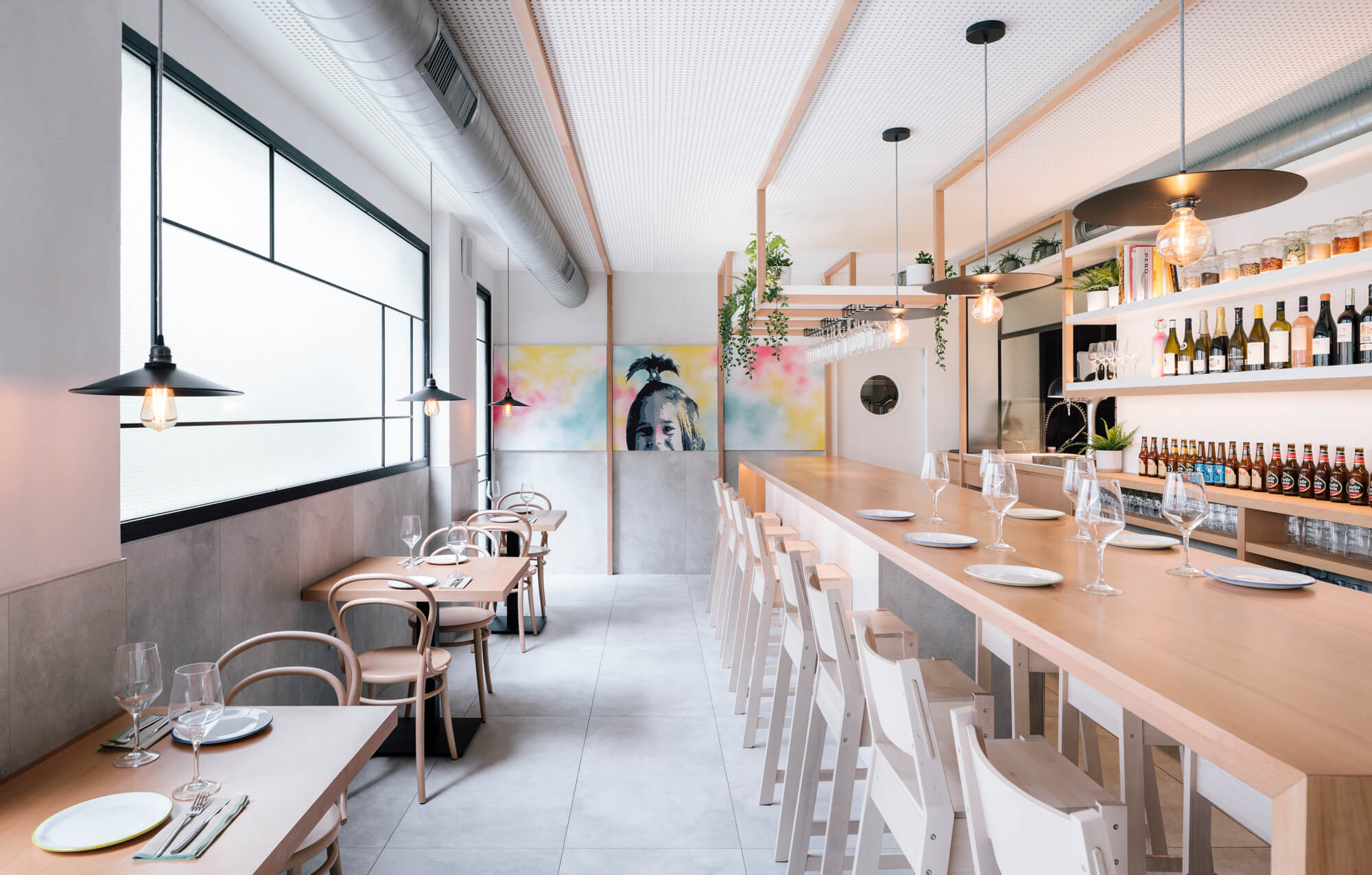 To soften what could easily be an austere (if not cold and uninviting) space, the team at Zooco — led by architects Miguel Crespo Picot, Javier Guzmán Benito and Sixto Martín Martínez — introduced a number of vaporized beech wood elements that give the eatery its graphic edge. These linear features begin as vertical components then transform into ceiling features as they run equidistant and parallel across the L-shaped space, darting up and down at points to meet track lighting systems as well as become glass storage above the linear bar and a shelving system behind. Here, small opening gives those sitting at a bar a peek into the workings of the bustling kitchen. 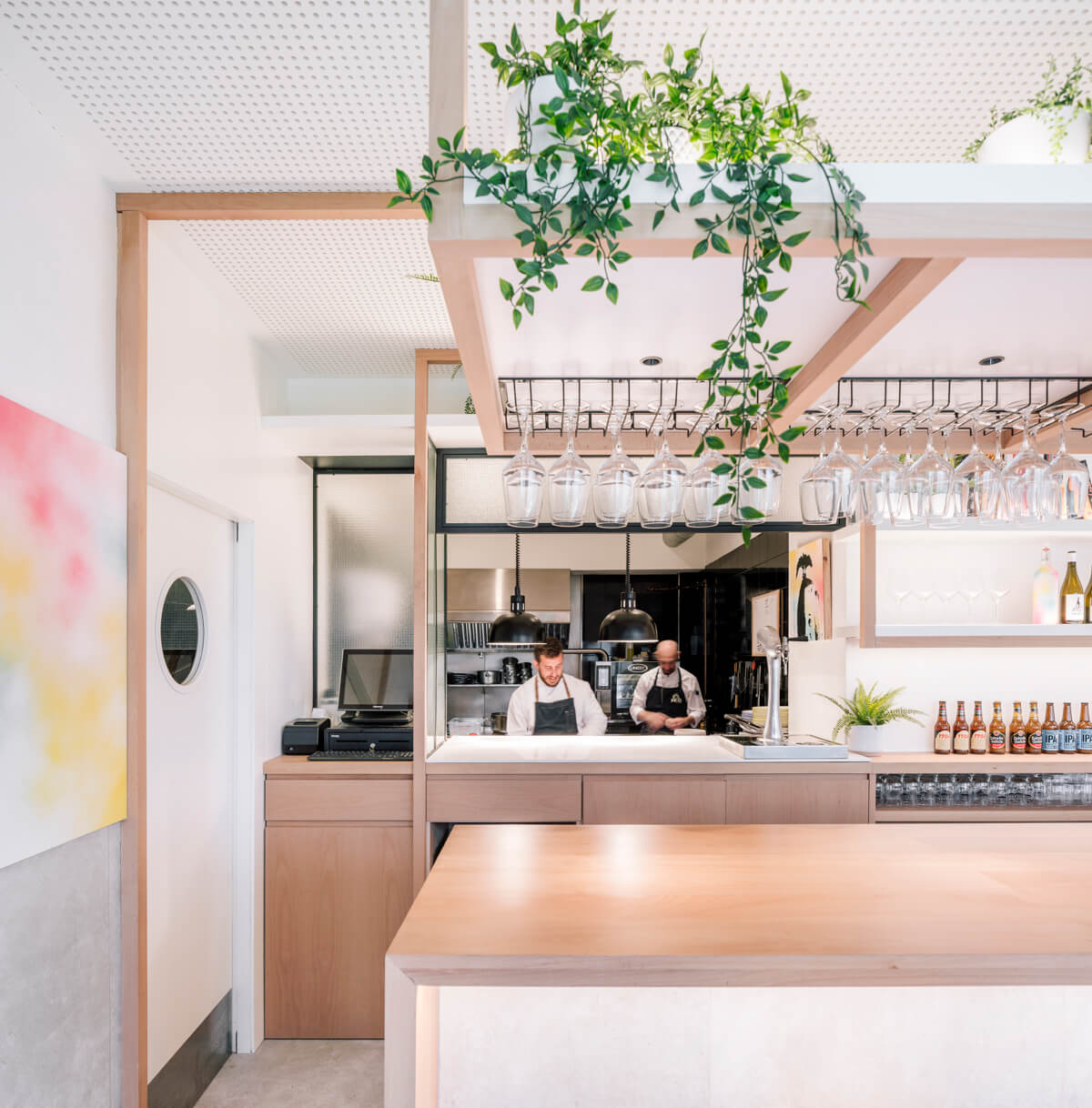 “At the same time that they order elements,” the studio explains of the beams, “they sculpt the space, generating a multitude of perspectives and overlays of frames depending on the point of view in which we place ourselves.” In other words, alongside delineating the spartan interior’s “functional zones,” including the banquettes near the entrance and the main seating area, these wooden features also work to accent the “neutral and calm composition” and emphasize the airy atmosphere. 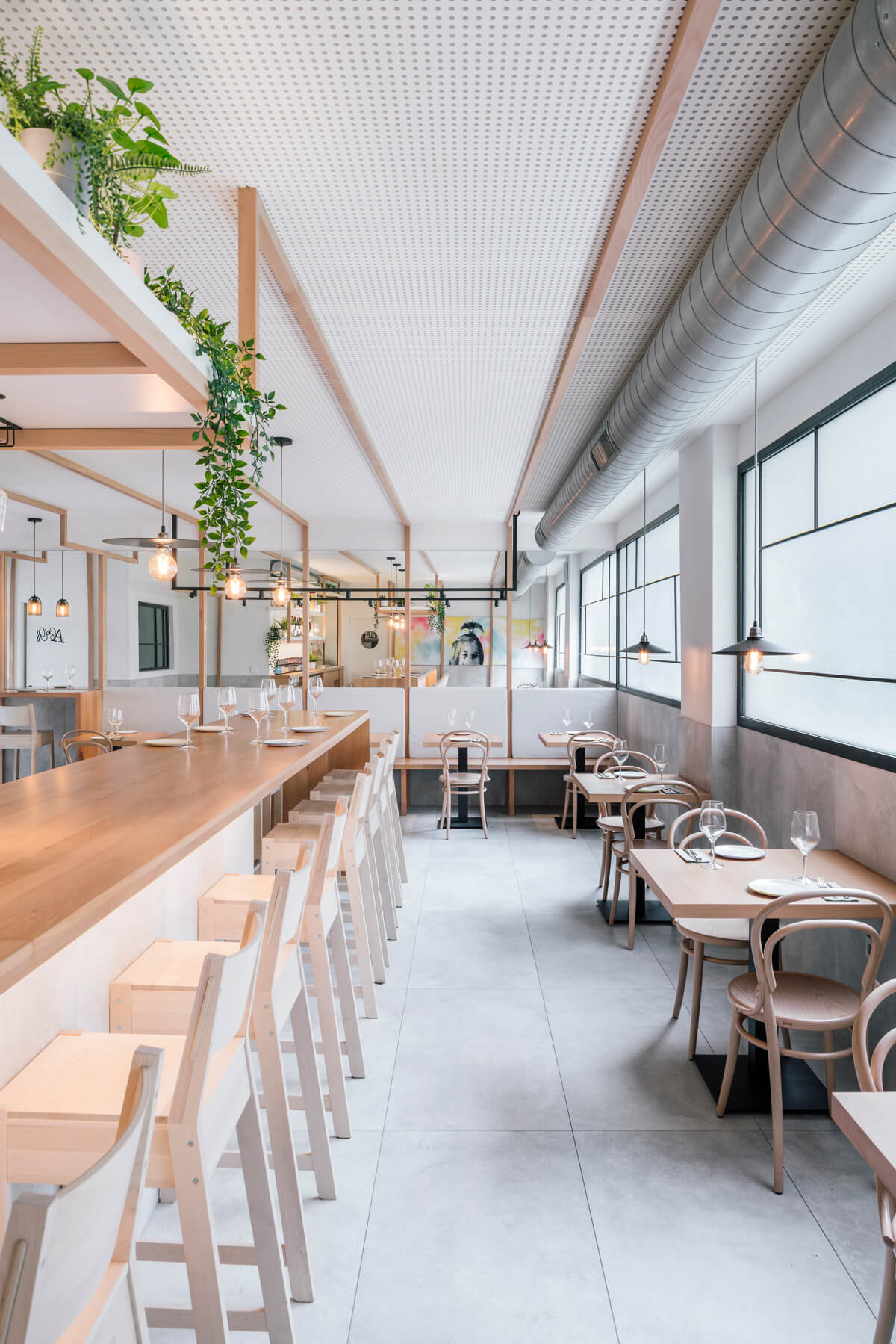 Additional pale wood elements — from custom-designed tables and Thonet-esque chairs to to an elegant bar top — complement the subdued palette and exacting industrial details, such as the semi-opaque windows with tailored black frames and charming pendant lights. 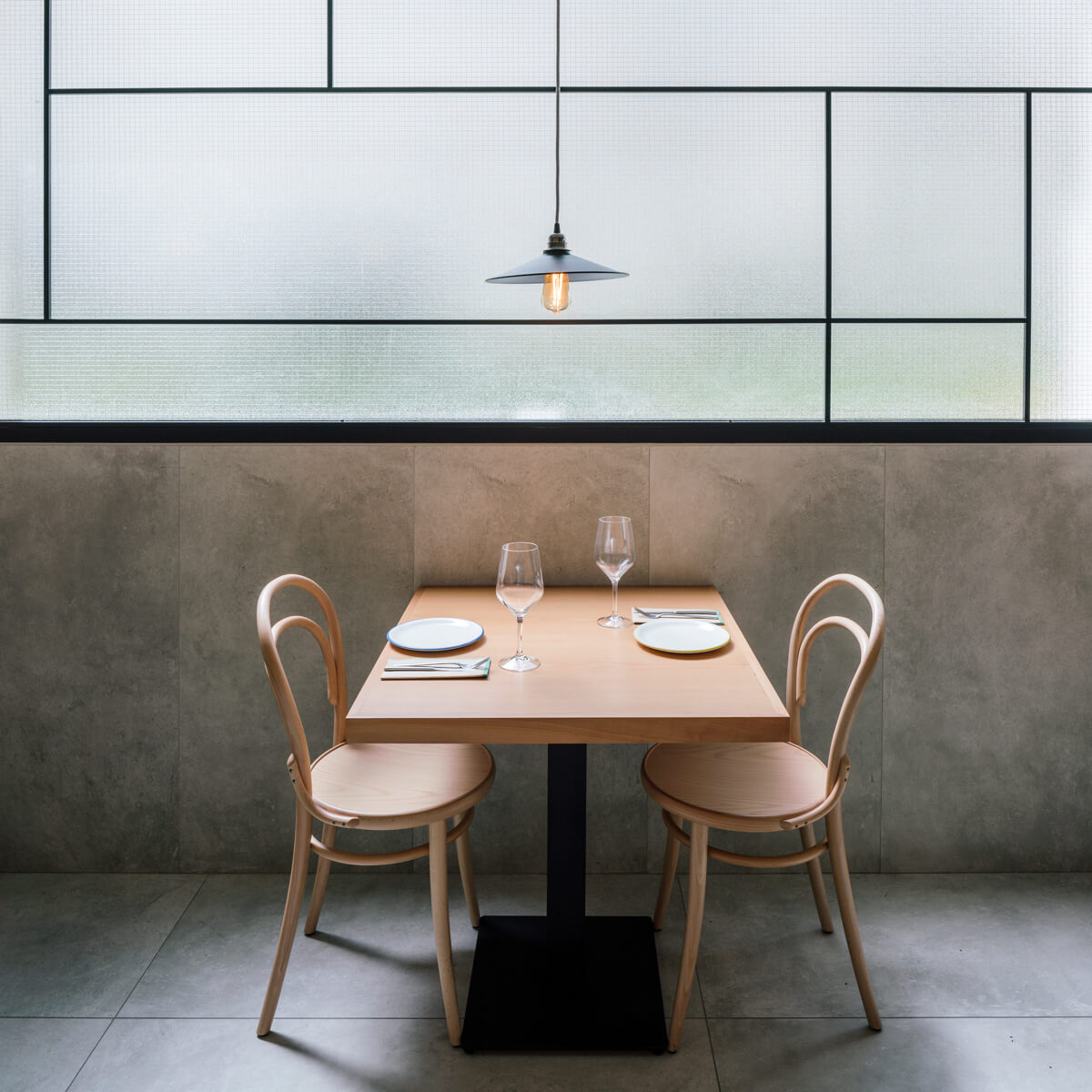 “The rest of the elements — such as metal carpentry and lighting —  continue with the formal linear premise,” the studio adds, “enhancing the game of overlapping patterns and geometries raised by the wooden slats.” 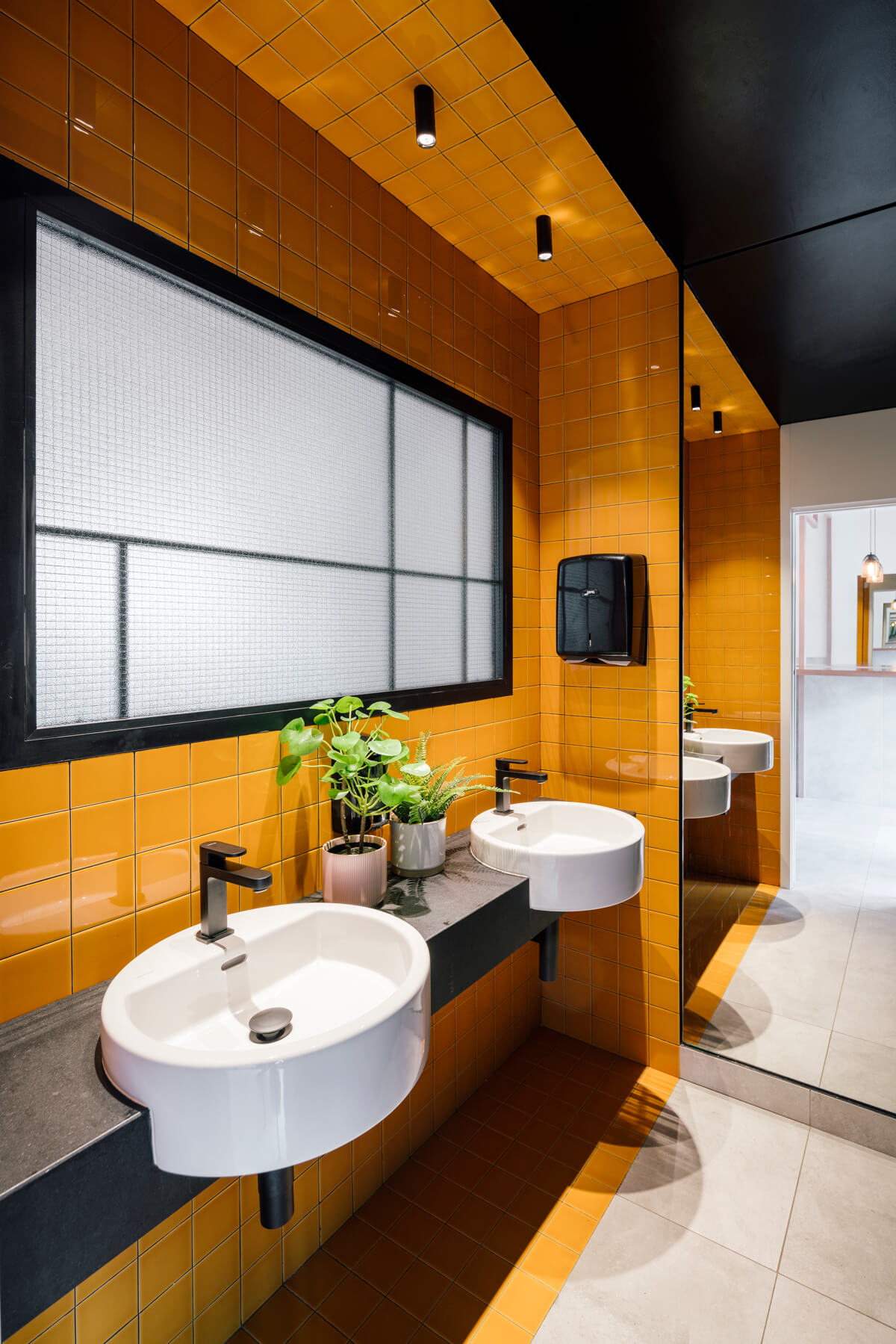 In a nod to Spanish design history and the renovated facade, vibrant marigold tiles add a hint of whimsy to the lavatories — not only capping off the space but continuing the graphic approach that makes La Hermosa De Alba’s new outpost as much a feast for the eyes as for the stomach.