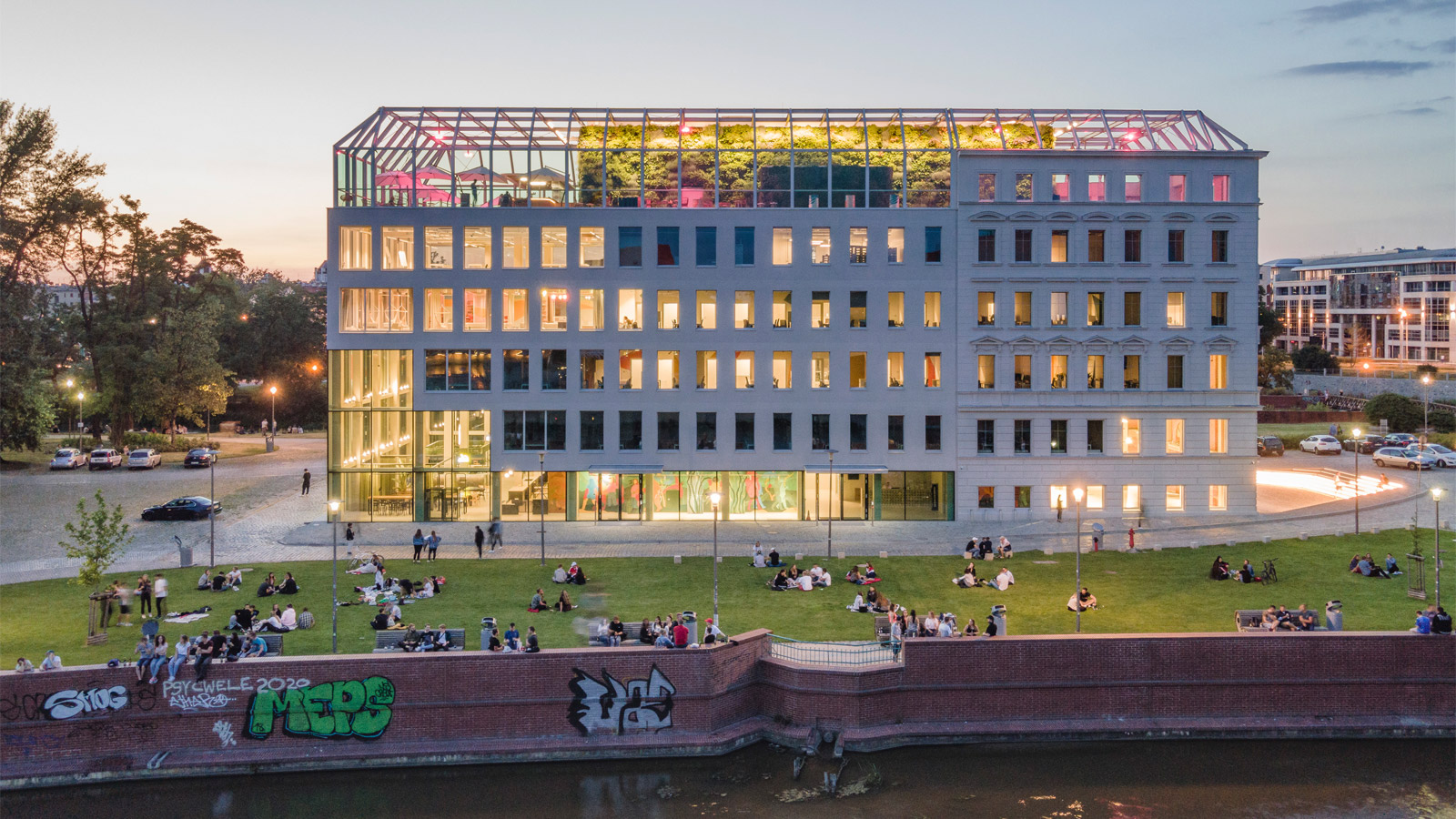 Co-working spaces. Food hall. Event Venue. Cafe. Rooftop terrace. From Manhattan to Manilla, these are the ingredients of a mixed-use 21st-century urban destination, integrating the flexibility of the modern workplace into an amenity-rich complex. In the Polish city of Wrocław, MVRDV offer an exemplary take on the formula by adapting a 19th-century building on Słodowa Island.

Situated at the heart of the Polish city, the small islet was once a key part of the urban centre, though most of its buildings were razed during WWII. 75 years later, the island is a vibrant, communal green space dotted by historic remnants – including the stately building sensitively reinvented by MVRDV for co-working firm Concordia Design.

Aiming to respect the building’s presence while nourishing the surrounding park’s sociable ambiance, the designers opted for an understated yet energetic intervention. “One of the most interesting aspects of Wrocław is the city’s busy public realm and use of the riversides. As the heart of this outdoor activity, Słodowa Island is a unique and fascinating place”, says MVRDV founding partner Nathalie de Vries.

While the ornate 19th-century facade has been meticulously preserved, MVRDV’s addition introduces a more porous and permeable complement to the formal structure.

Transparent glazed frontages wrap the new wing, inviting passerby to explore the striking mural by prominent Polish artist Alicja Biała – or stop for a drink at the light-filled ground floor food hall. At the more formal end of the complex, the historic building’s brick frontage hosts a more intimate cafe.

With all three of the new building’s frontages wrapped in up to three storeys of glass, the design encourages visitors from all sides of the park, creating a building with no “backside,” according to MVRDV.

All along, the designs maintains the rhythm of fenestration and stone materiality of the older building, making for a cohesive addition. Above the dynamic and public-facing ground level, the 4,500 square metre complex features a range of co-working environments. The whole of it, old and new, is topped by a an expansive rooftop terrace. Wrapped by a glass facade, it opens up to a striking panorama.

In short, it’s an urban hub. “Concordia Design’s Wrocław combination of a historic structure, a vibrant mixture of creative and exciting businesses and new attractions working in harmony with the island’s public space will cement Słodowa Island’s reputation as the place to be in Wrocław,” says de Vries.