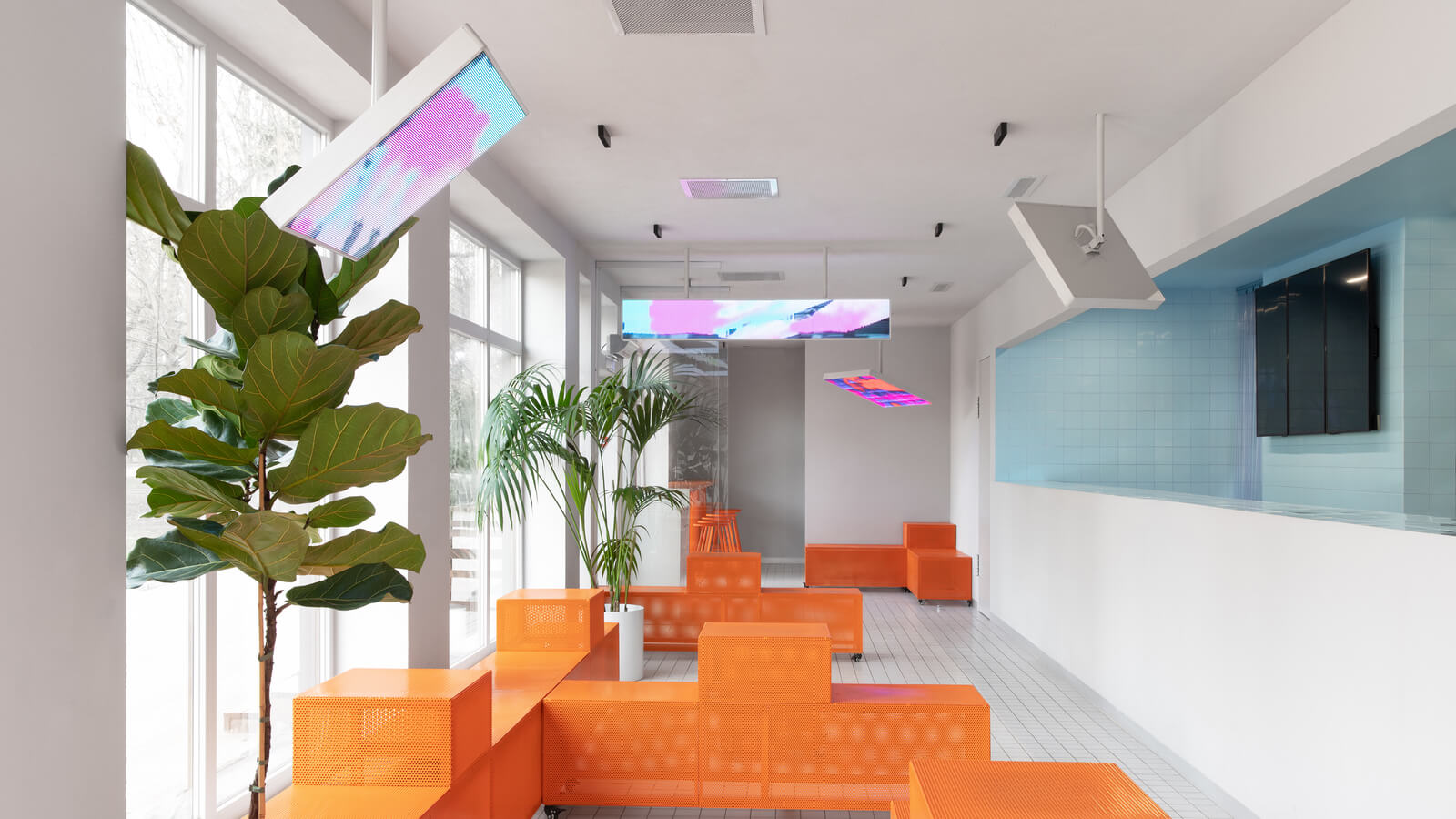 In Russia, AND Y Cafe Mixes Digital and Physical Space

Emerging designer Eduard Eremchuk creates a highly conceptual grab-and-go in central Rostov-on-Don that blurs the line between real and virtual.

Built in 1974 at the heart of the Russian city of Rostov-on-Don, the austere Don State Public Library has become a de facto hub for the area’s cultural activity. Though encircled by a number of universities and institutions, the stone-clad, Jan Kanis–designed complex is an imposing — even uninviting — presence. For a new “conceptual fast food cafe” adjacent to the building, Moscow-based designer Eduard Eremchuk opted for an airy treatment with the addition of mobile, graphic elements that animate the 120-square-metre space.

Inspired by the features of local subway stations as well as the qualities of virtual space, the outpost — named AND Y — is a spartan white-tiled environment populated by a series of vibrant orange cubes on metal castors. The Tetris-like landscape of low-slung, powder-coated and perforated metal furnishings activates the linear interior, allowing the cafe to “change its organization literally every day,” according to Eremchuk.

Above, ceiling-mounted LED screens further riff on the subway theme (they nod to the signage counting down to the next train) and add what the designer calls a “futuristic atmosphere” to the narrow floor plate. Videos of natural and artificial landscapes interrupted by technicolour glitches and sardonic phrases (such as “Hi To Virgil Abloh”) in bold sans serif font rotate across the titled monitors. In two sizes (long rectangles and large squares), they hover above the geometric terrain in anticipation of a viewer.

Elsewhere, other neon-orange elements feature prominently against the monochromatic background. Near a set of windows that look out toward the library, Eremchuk included a high-gloss table with space for six. Linear bar versions of the custom design flank either end of the L-shaped space, intended to provide a brief rest stop for passersby.

“I would like people to feel different,” says Eremchuk of the design, “and create an illusion of a digital world.” Trimmed entirely in ceramic tile with a simple patterning of what appears to be ink blots or even cowhide, the small washroom attests to this desire. A carefully positioned mirror and white faucet further emphasize the rendering-like ambience of the lavatory that completely envelops users in a physical-cum-virtual space.

Like its digital precedent, AND Y is conceived “for an endless stream of visitors” to “blur boundaries between real and virtual.” It’s playful, coy and refreshingly self-aware — fit for a year when the line between physical and digital has never felt more unclear.

Emerging designer Eduard Eremchuk creates a highly conceptual grab-and-go in central Rostov-on-Don that blurs the line between real and virtual.