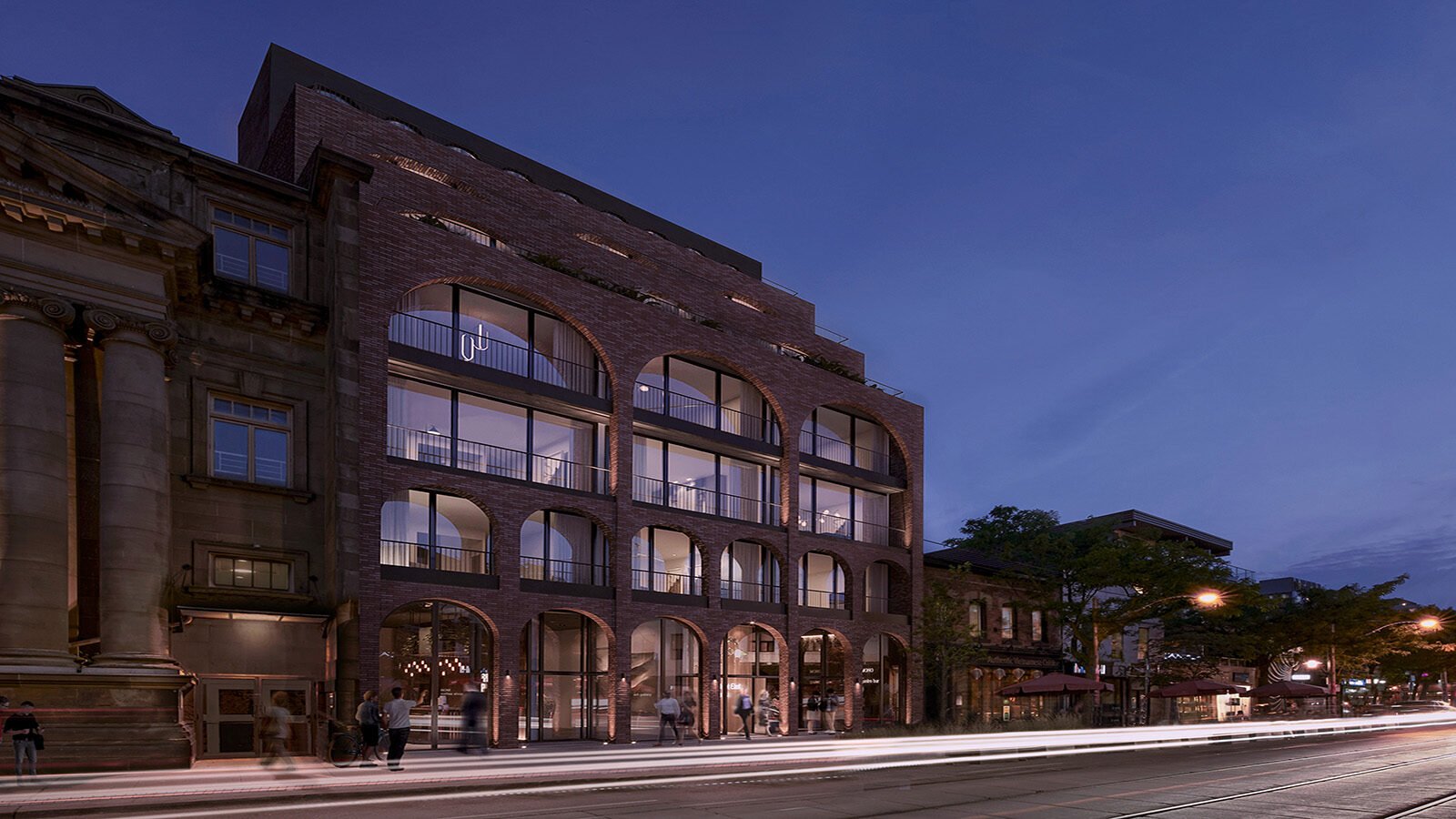 In Toronto, A New Condo Embraces its Urban Context

Biblio Lofts riffs off its neighbours to create a remarkably attuned residential building.

In Canada’s most populated city, the term “missing middle” designates the lack of public policy and zoning allowing for mid-sized buildings (with lower density than traditional condominiums) to be constructed in most neighbourhoods. This oversight has resulted in limited options for homeowners — those who want to live in Toronto instead of above it.

Responding to these concerns, a new condo development in Leslieville — entitled Biblio Lofts — is set to fit into the “missing middle,” while integrating seamlessly with the city’s fabric. Headed by NVSBLE Developments, who tapped Toronto’s BDP Quadrangle to lead its debut project, the seven-storey building was designed to blend into its surroundings. “We didn’t want it to feel like an imposition on the neighbourhood,” says Sina Souresrafil, managing director at NVSBLE. 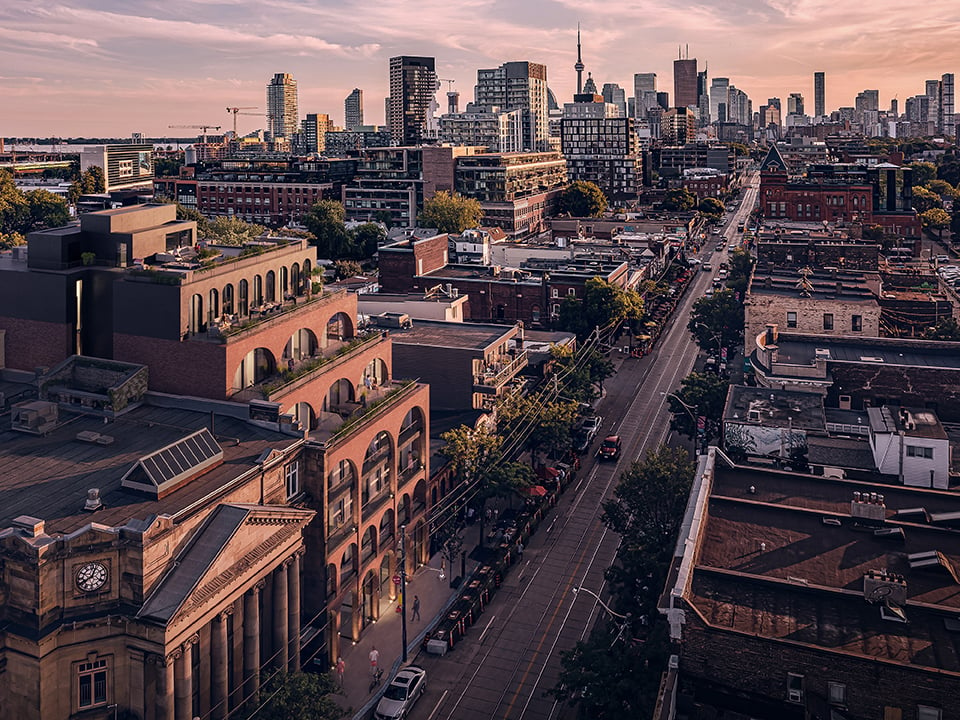 But that’s not to say it’s unremarkable. Taking inspiration from the neighbouring Queen/Saulter branch of the Toronto Public Library — defined by its soaring Ionic columns — as well as some of Leslieville’s unmissable destinations, like the refurbished, brick-clad Broadview Hotel, Biblio Loft’s vaulted façade is a refreshing departure from typical condo typology.

Brick arches framing wide windows provide a modern twist on one of Toronto’s signature architectural features: the sleeping porch. Twin light-wells on either side of the building ensure that the interiors receive the perfect amount of natural light — while fitting in perfectly with the neighbourhood’s historic architecture. 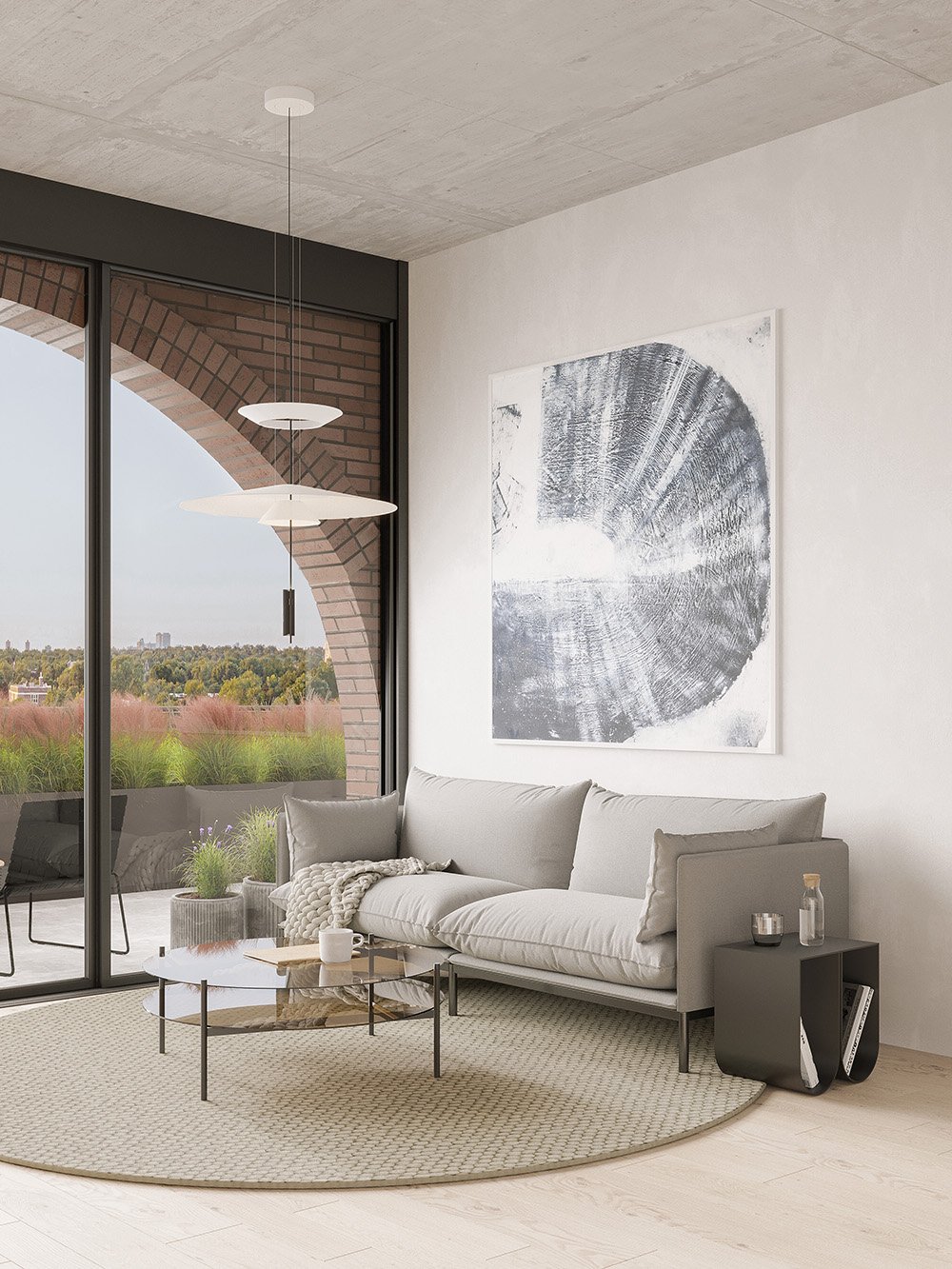 Hungry for a change from the cookie-cutter skyscrapers that dot the city’s downtown core, NVSBLE brought in Commute Design Studio (the visionaries behind some of the city’s most well known restaurants such as Aloette, Oretta and Table Souk) to design the condo’s interiors. “Commute’s experience in hospitality was a great plus. We wanted to build an experience, not a condo,” recalls Souresrafil. 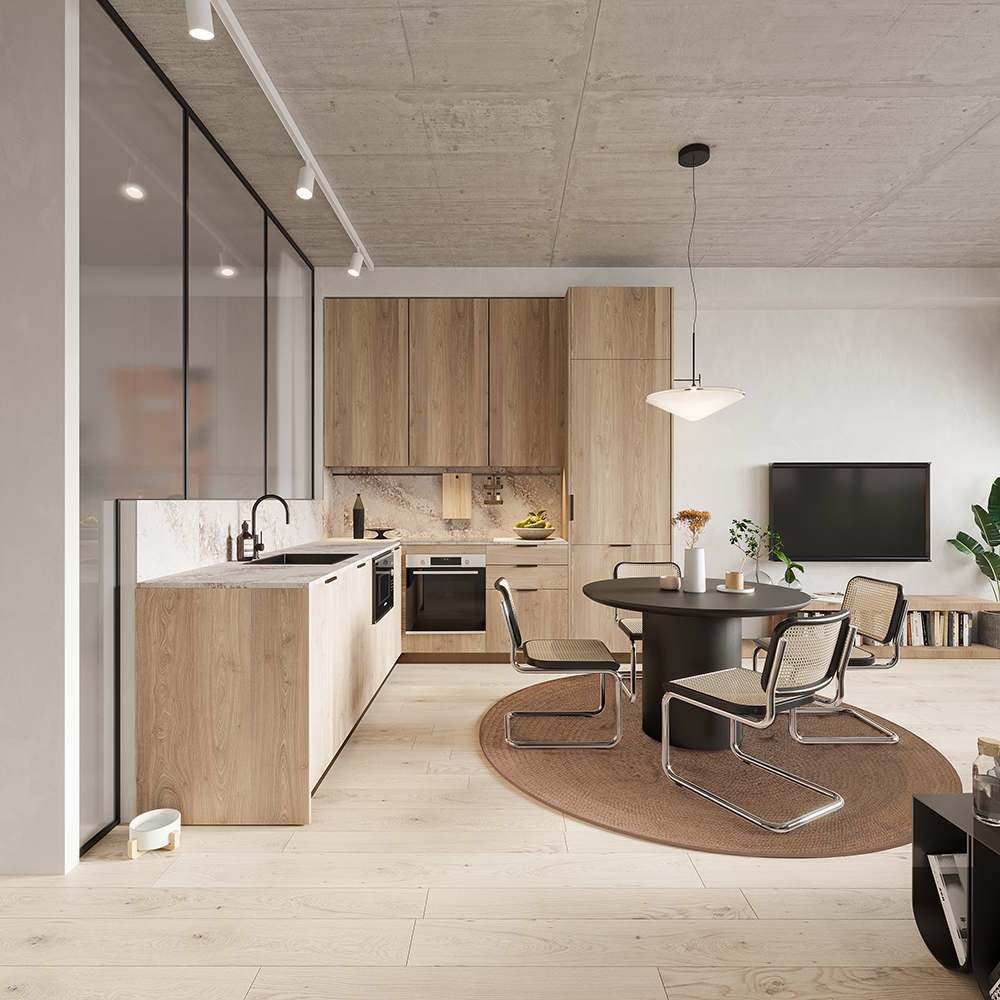 It’s this design ethos that makes Biblio Lofts stand out from the crowd. Each of the 30 suites – including one, two and three-bedrooms, with dens and without — feature kitchens by Scavolini paired with Caesarstone surfaces, in a variety of customizable finishes ranging from contemporary to mid-century. With exposed concrete ceilings — at a height of nearly three metres — each suite feels vast and airy, without compromising on comfort and warmth. And floor to ceiling windows, hardwood flooring and porcelain tiles are just some of the luxurious specifications adorning the space. 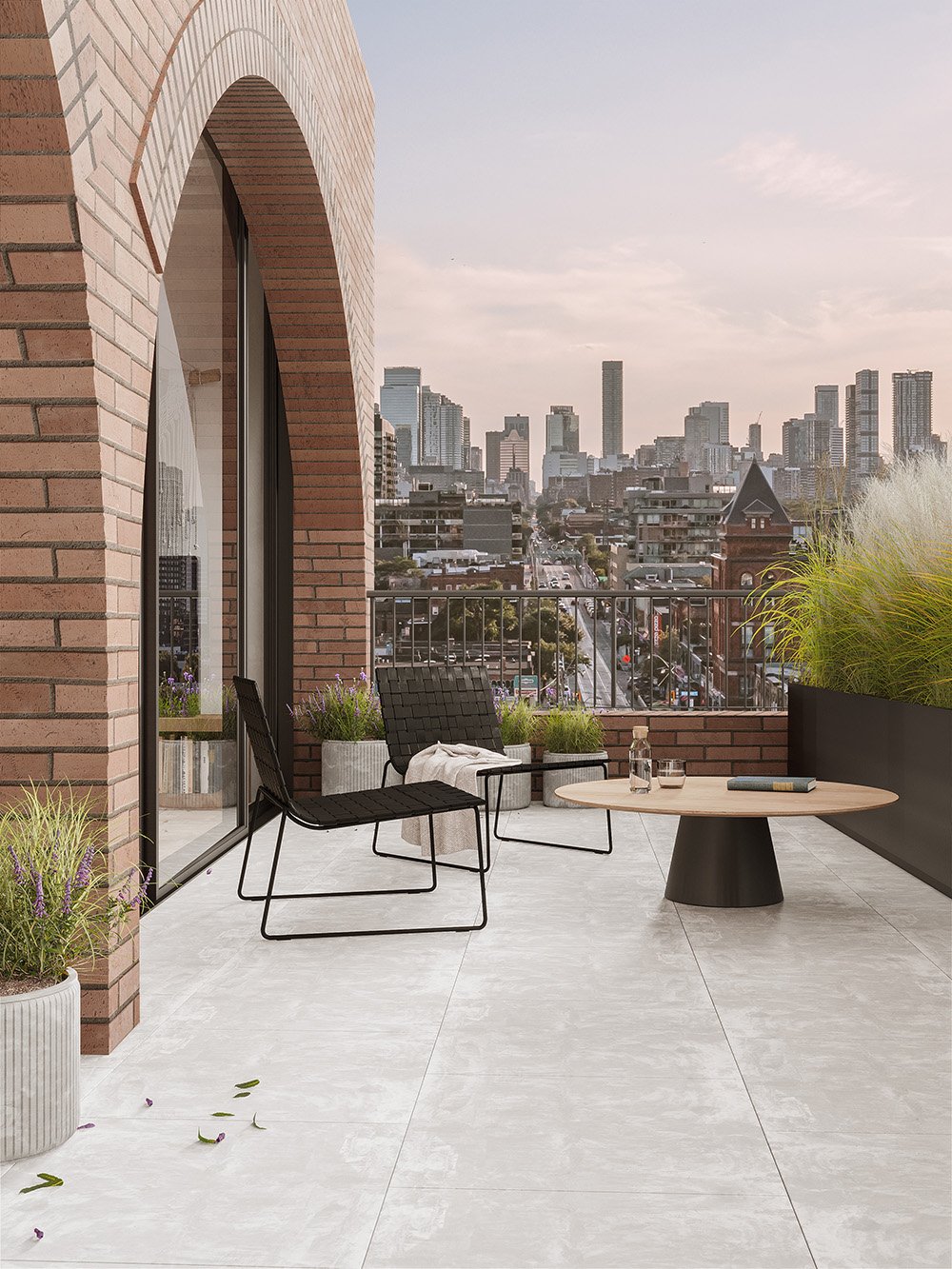 Each suite also has access to the outdoors (through a spacious terrace or balcony), while a showpiece rooftop patio provides ample space for socializing in groups — and admiring the East end vistas. To meet the city’s stringent angular plane requirements, the building is stepped back on the North and South sides — so it won’t block the sunlight from shining onto Queen Street. 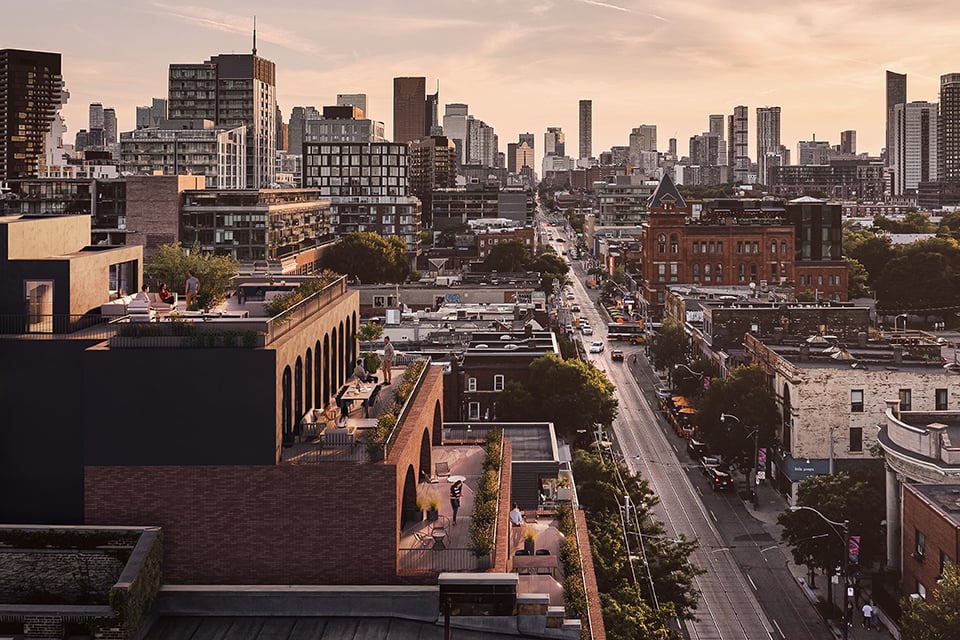 It’s a convivial atmosphere that the architects and designers behind the project worked tirelessly to achieve. Post-pandemic, the team hopes that Biblio Lofts will be a place to gather — with family, friends, for dinner parties or a patio soirée. “We’re not here to sell you anything other than what your heart is telling you to consume, which is friends and family,” remarks Souresrafil. Merging hospitality expertise and architectural mastery, Biblio Lofts is infused with the city’s vibrant energy, on a modest, welcoming scale.

This content was published by Azure on behalf of NVSBLE.

Biblio Lofts riffs off its neighbours to create a remarkably attuned residential building.