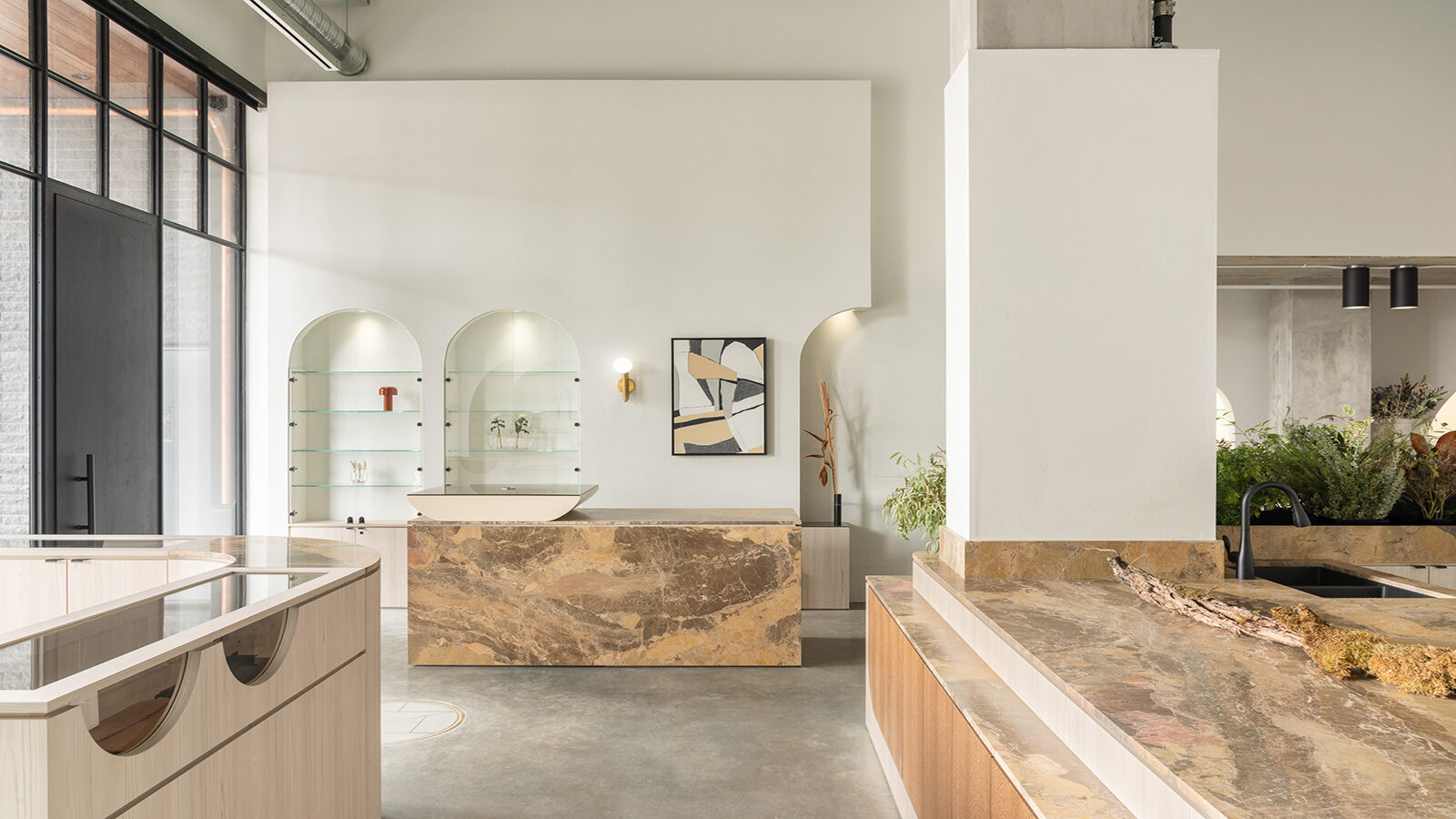 Cadine, a new retail destination in the coastal city’s Cambie neighbourhood, gets an elevated makeover from Ste Marie Design Studio.

Although many of us have had to scale back our in-person shopping habits over the past year, the retail industry is still alive and well. A recent trend in retail interiors has welcomed a host of meditative, intimate spaces to the brick-and-mortar world. Ste Marie Design Studio has brought the trend to Vancouver’s South Cambie neighbourhood by way of Cadine, an immersive and experiential floral boutique.

Though Cadine deals in a variety of goods from clothing to imported chocolate, their speciality is floral design. Working with flowers and greenery can often be messy and unruly, but the clients wanted Cadine to be a concise, streamlined space. To highlight this duality, Ste Marie chose to build a central workstation, wrapped in sumptuous leathered granite, which serves as a space for creation. There, floral designers can make use of the long counter, sink and hidden storage cabinets to create arrangements on the go.

Light square tiling offsets the industrial feel of the polished concrete floors, offering a more inviting, almost residential expression. Throughout the space, amorphous cream-coloured forms recall the biotic theme at hand. And while a textured wash of white paint unfurls over each wall, the starkness of the space highlights Cadine’s expressive wall hangings. Suspended from the ceiling’s ventilation pipes, several “gymnastics rings” also descend into the space, ready to be used as ingenious scarf hangers.

Various lighting solutions are employed throughout the space, from functional overhead spotlights that meld into the building’s industrial ceilings to strategically placed table lamps — many of them in shapes resembling a mushroom top — which are as decorative as they are functional.

The generous space is partitioned by oval-shaped planters, as well as the tall rusty-red curtains that add dimension and colour to the largely monochrome space — the hue echoes Cadine’s outdoor banners, which announce the shop’s presence to visitors. Without them, passersby might miss out: The outpost looks almost anonymous from the exterior, save for the floor-to-ceiling windows that offer a peek at the sumptuous world inside.

Cadine, a new retail destination in the coastal city’s Cambie neighbourhood, gets an elevated makeover from Ste Marie Design Studio.