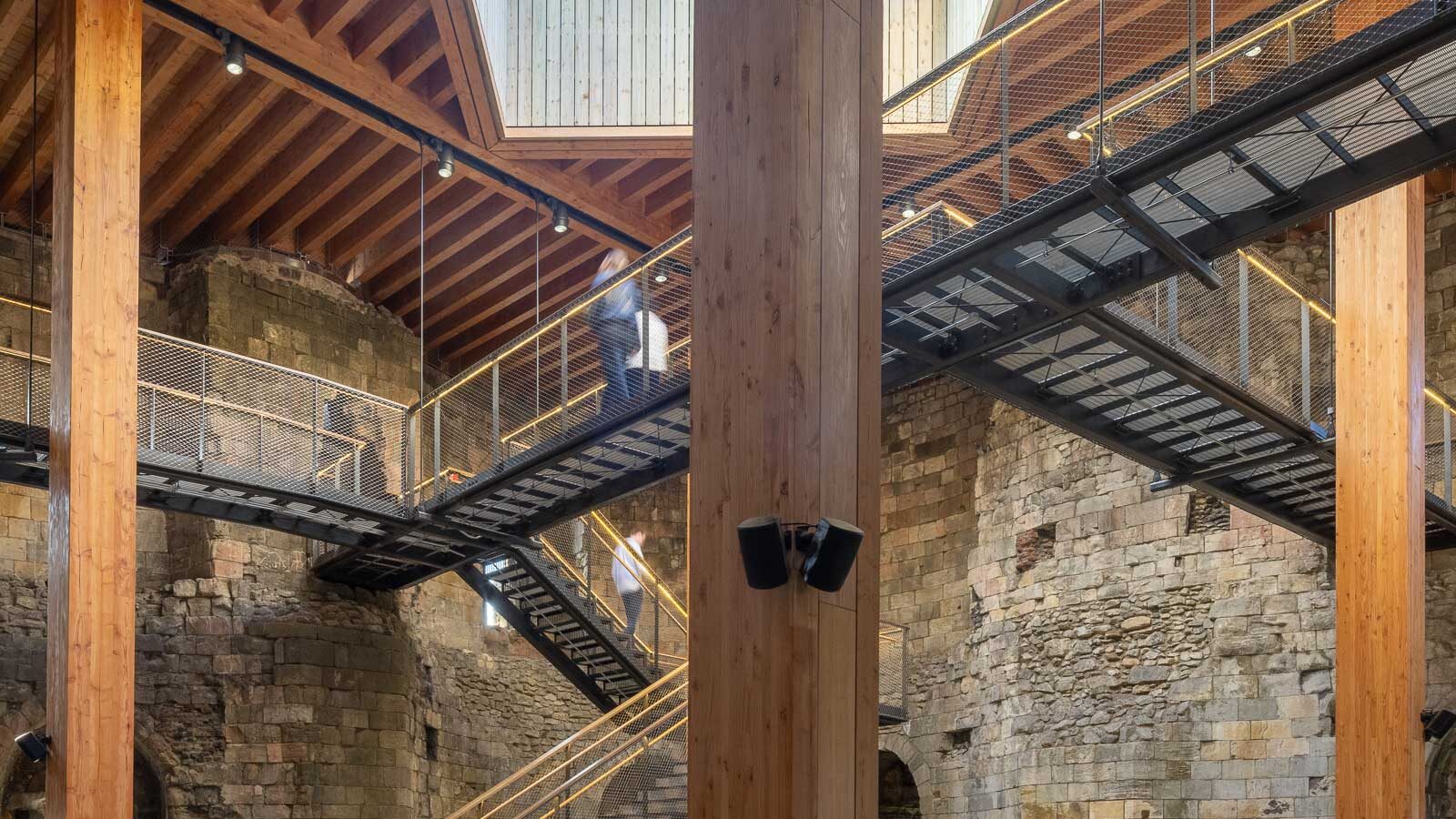 In York, An Architectural Ruin Is Given the Makeover of the Century

When asked what the significance of Clifford’s Tower is, Hugh Broughton of Hugh Broughton Architects responds, “I guess its significance has grown over time.” Before the architect’s recent intervention, the tower had already had many lives: It was once the seat of government, at one point in time it was a mint where money was produced, then an ammunition depot and, lastly, a garden folly before it was abandoned as an architectural ruin. “By the time we came to it,” Broughton explains, “it was in a pretty sad state, with pigeons living in it.” 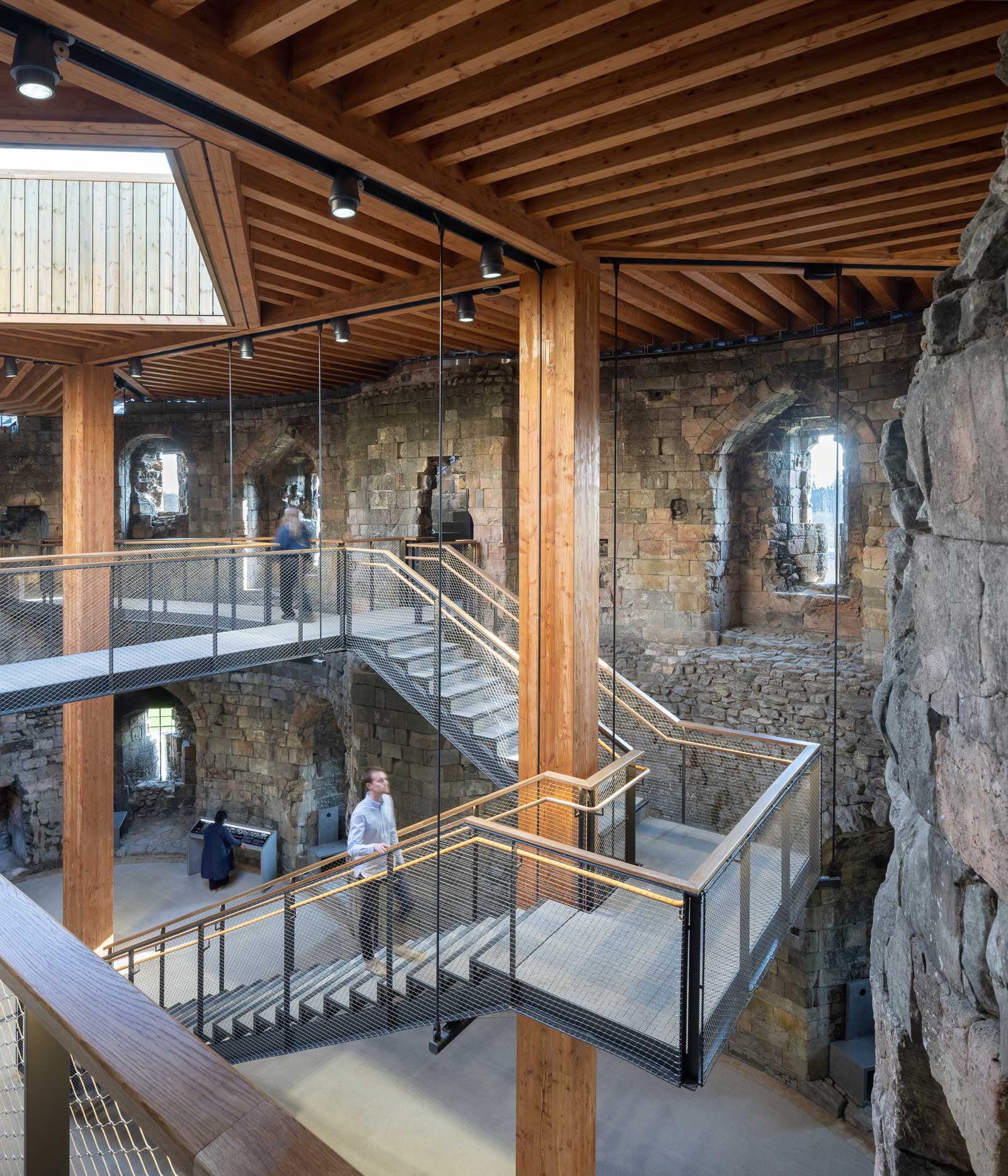 Not only is the tower imbued with history, but the site itself has equal historical significance. The grassy motte on which the tower sits was raised by William the Conqueror in 1068; in the 12th century, it is where Jewish people were persecuted and massacred — a tragedy that has been memorialized by planted daffodils, which are in full bloom this time of year.

Commissioned by English Heritage, conservation specialists Martin Ashley Architects, structural engineers Ramboll and Hugh Broughton Architects set out to rescue the limestone tower from further damage and gave it the makeover of the century. The intervention was a delicate operation and necessarily involved consultation with the people of York throughout the design process. 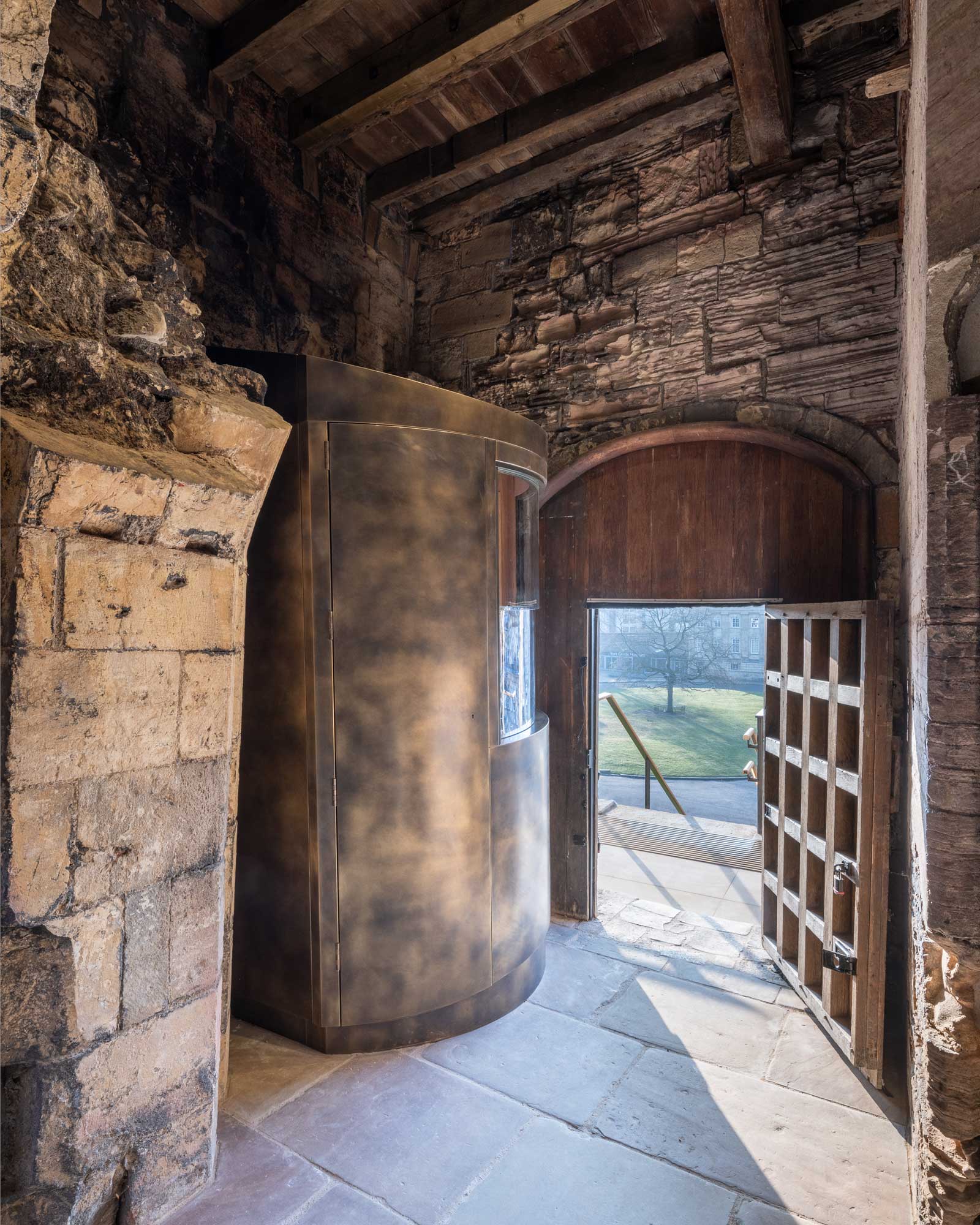 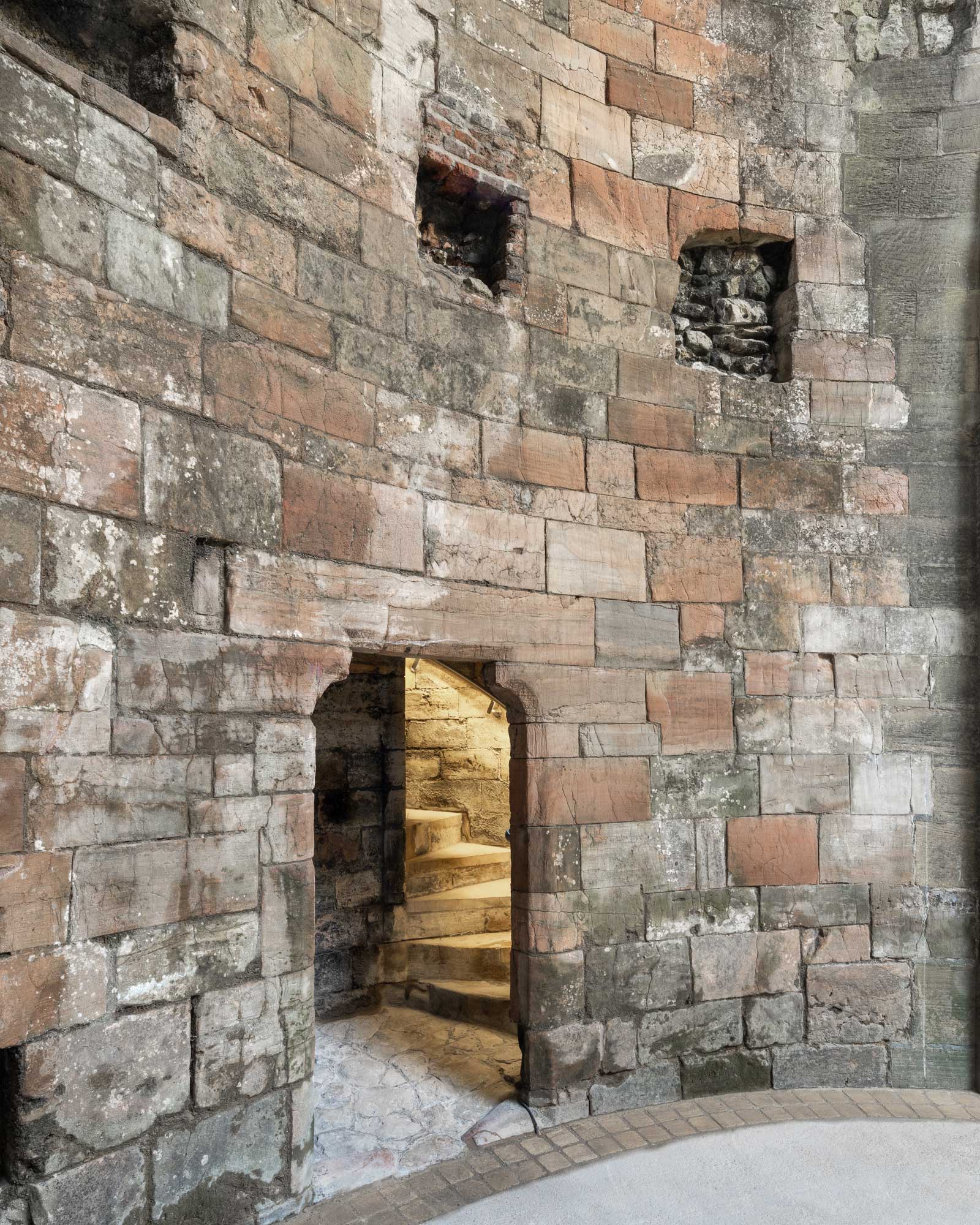 The project brief suggested that the architects design and install a visitor centre and a cafe within the tower. Used to working in unusual situations and guided by “the freedom to ask silly questions,” the architects chose to go in a different direction. Considering the brief, they started to think about what would happen if they removed all the interior elements of the tower and how this design decision might liberate the historic fabric of the tower.

The result of this line of questioning is a spartan interior with four giant columns made of sustainable glulam timber dominating the space and holding up the entirety of the new structure, including the roof canopy and steel walkways. The columns, majestic in scale, bear down and disappear into the concrete floor slab below our feet. The effect renders them almost weightless. Though the architectural insertion is unapologetically modern, it feels measured and soft, indeed, like “a landscape made of wood,” as Broughton describes it. 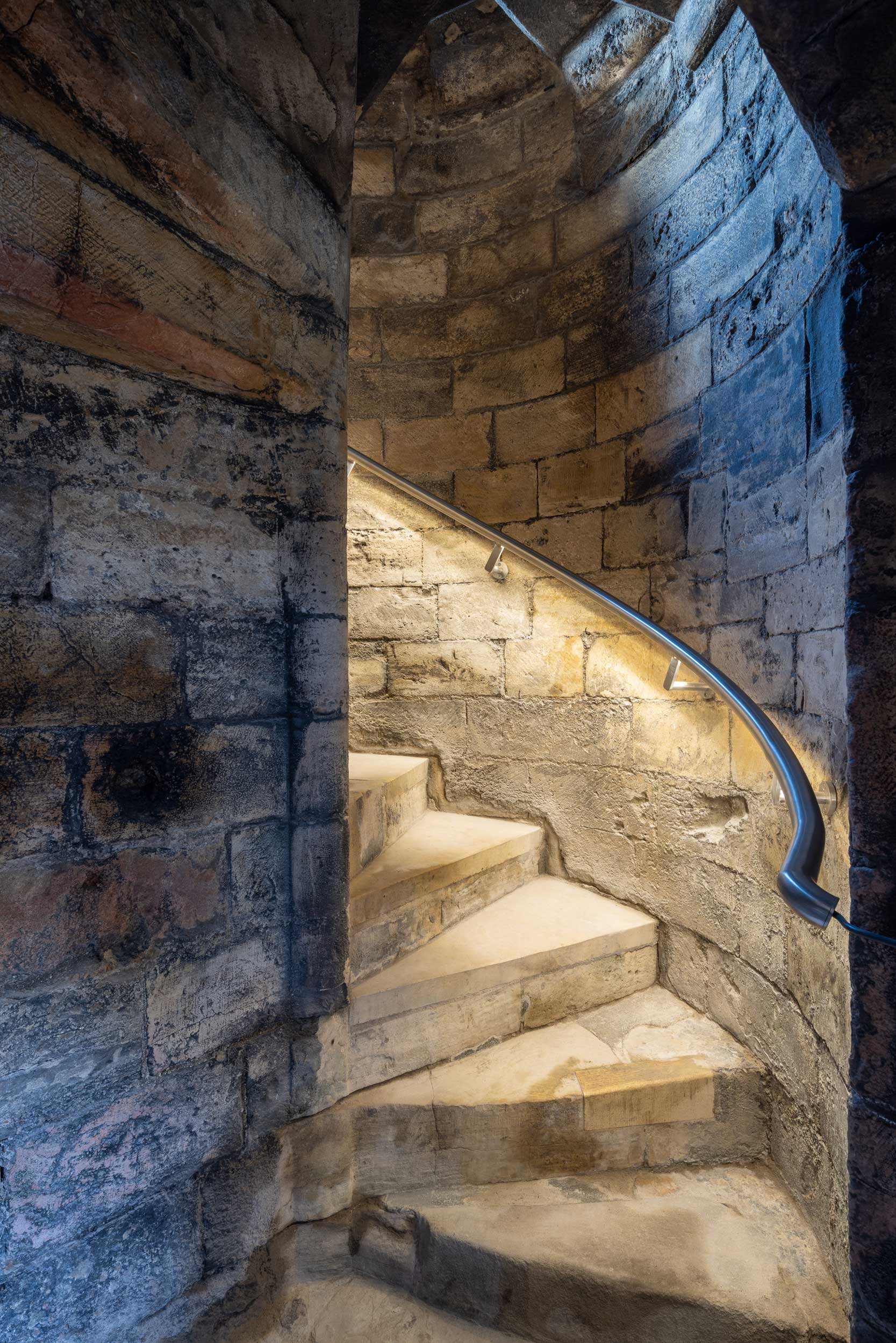 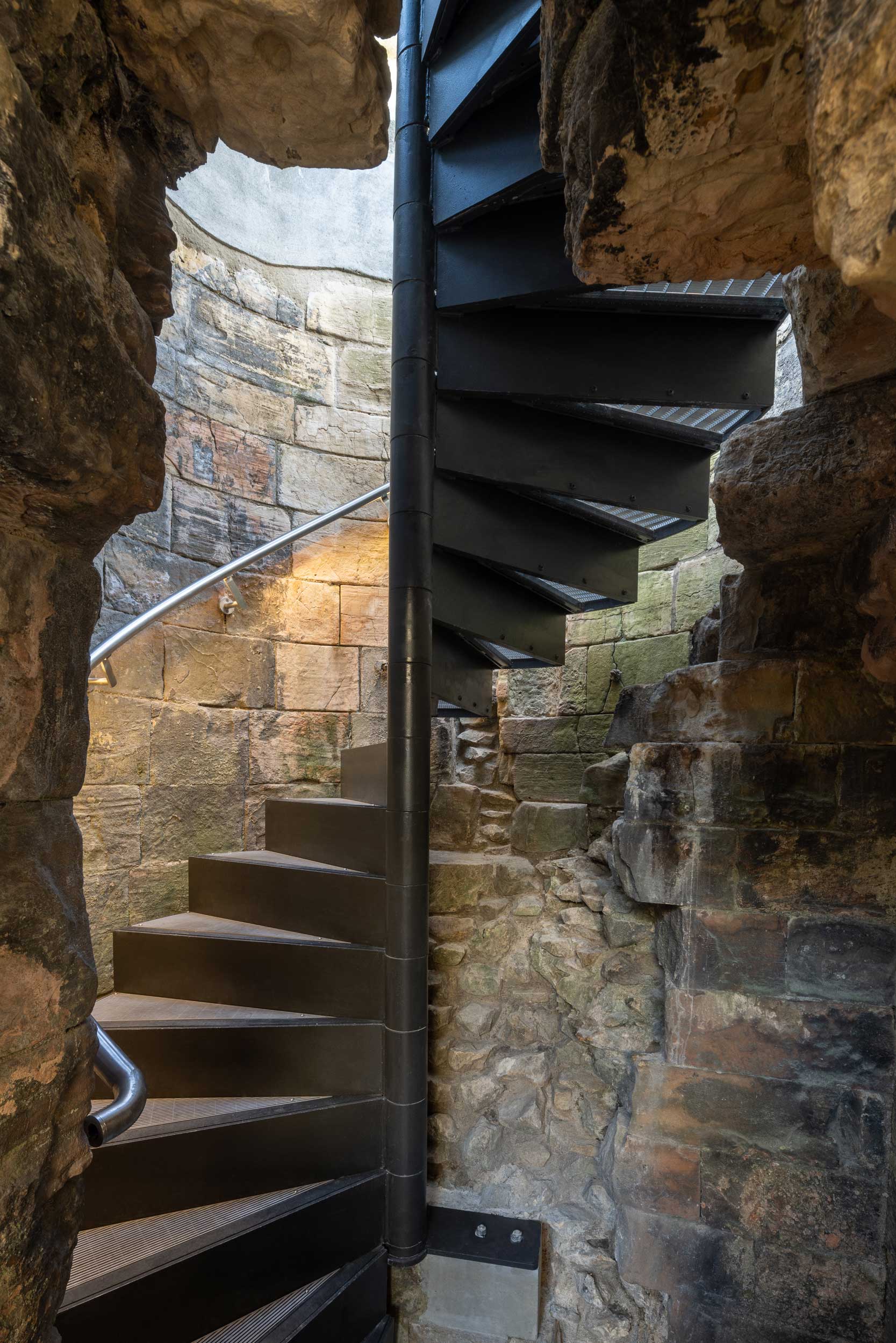 LED light strips illuminate the elegant oak-veneered handrails and guide the eye up to a twisted square hole puncturing the ceiling. Its clean, sharp geometry is in marked contrast to the overall rounded shape of the tower. The square opening exposes the space to the elements and reinforces the idea that the new structure is only a shelter, protecting what is, after all, a ruin, a fragile structure built long ago.

Clifford’s Tower was built by Master Henry de Reyns — the mason responsible for both Westminster Abbey and Windsor Castle — for King Henry III in the 13th century. The skill of the master mason is apparent throughout the tower’s construction. Where we might expect to see two separate pieces of stone at a juncture where the lobes of the tower meet, there is one piece of stone nimbly shaped to fit the juncture, making the tower structurally very strong. In recognition of de Reyns’ expert craftsmanship, mason Tim Doyle took on the task of carefully cleaning and restoring the tower’s stonework.

Apart from the quatrefoil plan, which was inspired by French prototypes, Clifford’s Tower is very English in style, evident in the way thick walls accommodate various elements: four stone spiral staircases, a garderobe with a flushing toilet — fit for the royal use — and a chapel with a dollhouse-like gable rooftop. 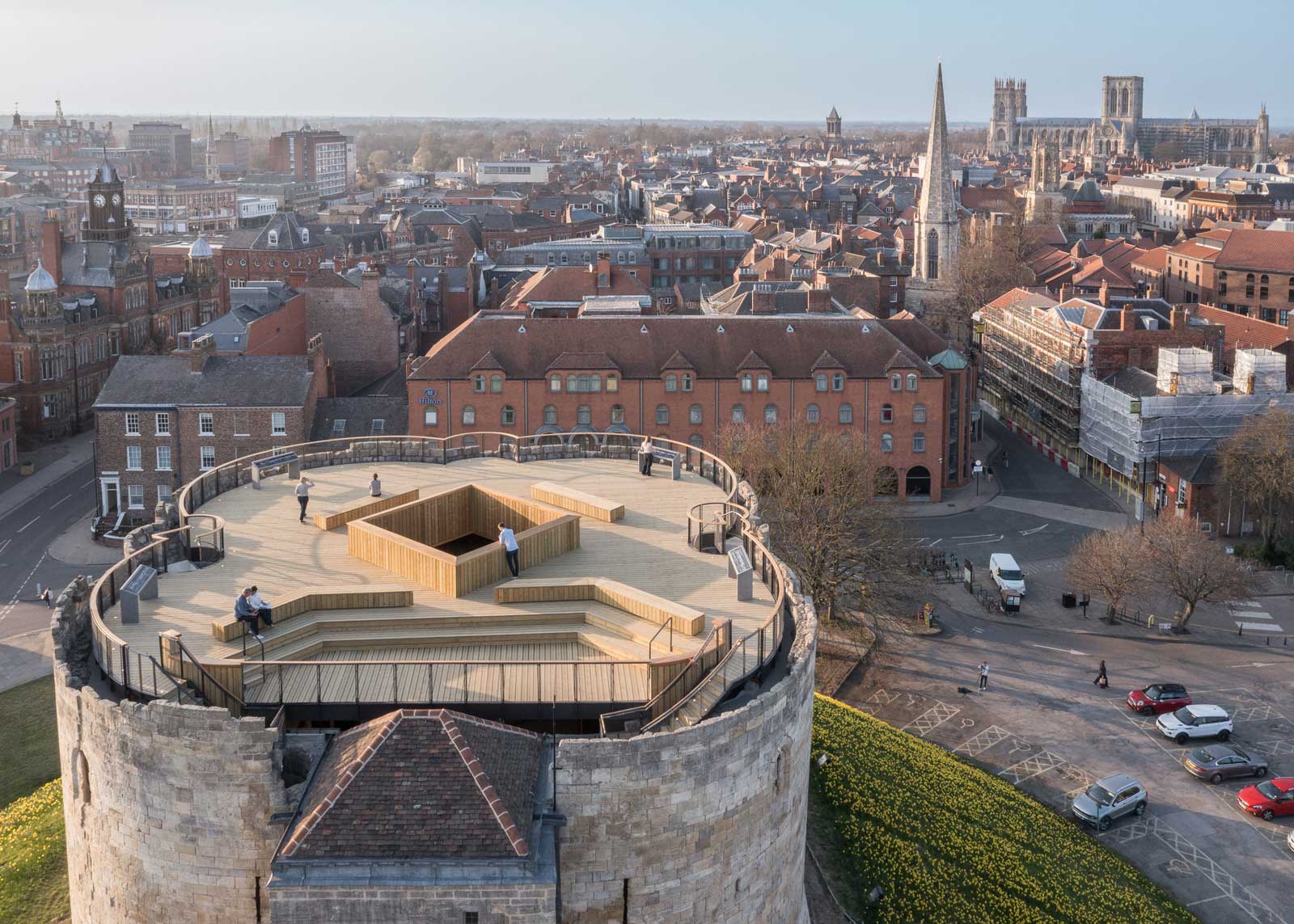 The suspended steel stairs stop at the original first floor, where steel walkways proceed into the stone wall’s various nooks. The spiral stone staircases, extended in lightweight steel, lead visitors up to the roof deck, from where they can experience panoramic views of York. The rooftop includes an amphitheatre, which drops down a level to preserve the contour of the original masonry at the front of the tower. On the other side, however, the deck’s level is maintained so visitors can look out onto York Minster, another one of the city’s historic landmarks. 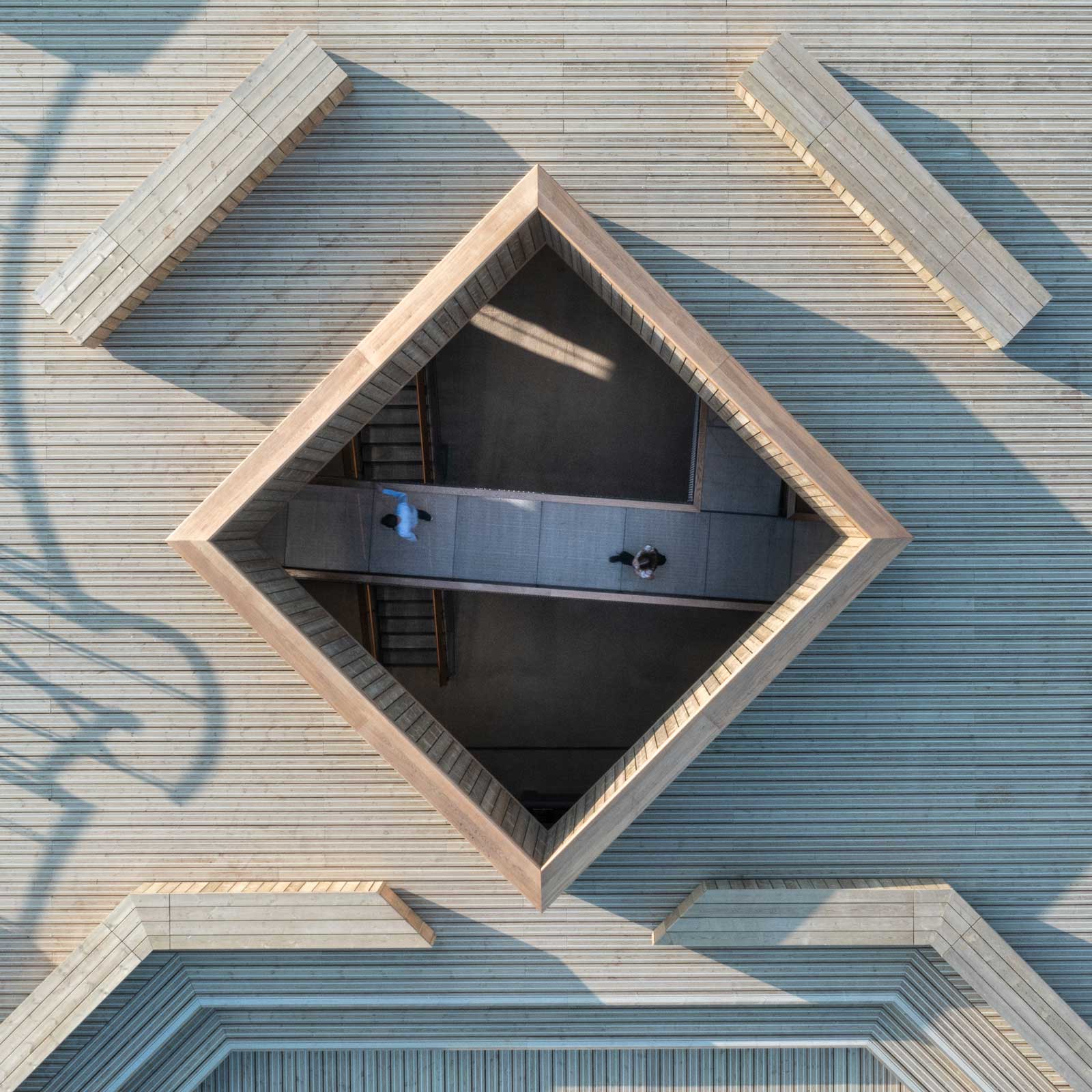 The local community was brought in to consult on various aspects of the project, including how to make a tower atop a steep motte more accessible. Though the suggestion to add a “dustbin-sized funicular” to the site remains memorable, the designers opted to use the existing central stone stair, with minor adjustments, as per the results of the consultation process: handrails were added and resting places for people to take a break from either climbing or descending the stair.

Seeking a lighter intervention than the typical ticket booth, the architects remodelled a Piaggio tuk-tuk to serve the function. Equipped with a television screen that broadcasts the tower’s newly completed interiors for those who do not want to make the trek up to it, the tuk-tuk is sited at the bottom of the motte, in a public square. At night, the specially converted electric vehicle is driven off the site. 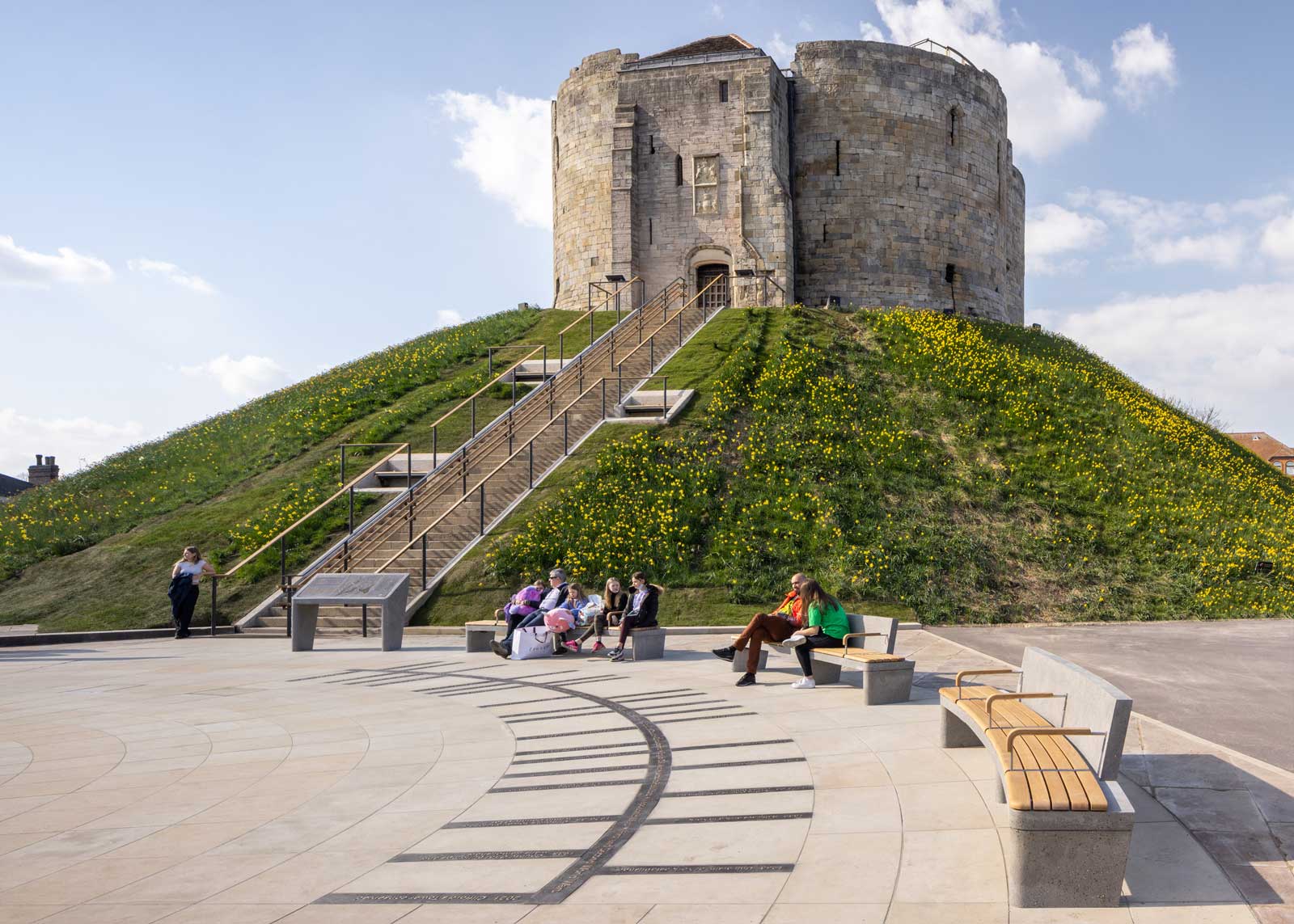 Alas, here is an architectural project that tenderly embraces a ruin. The light touch allows not only for the preservation of the building but also the long history that has shaped it. Beyond conservation, this project sends a clear message for how to approach revitalizing cities and towns: Build upon what we have with care and avoid pointless destruction so that we can retain and enhance our deep-rooted sense of identity in a place.

Yuki Sumner is a London-based architecture and design writer.