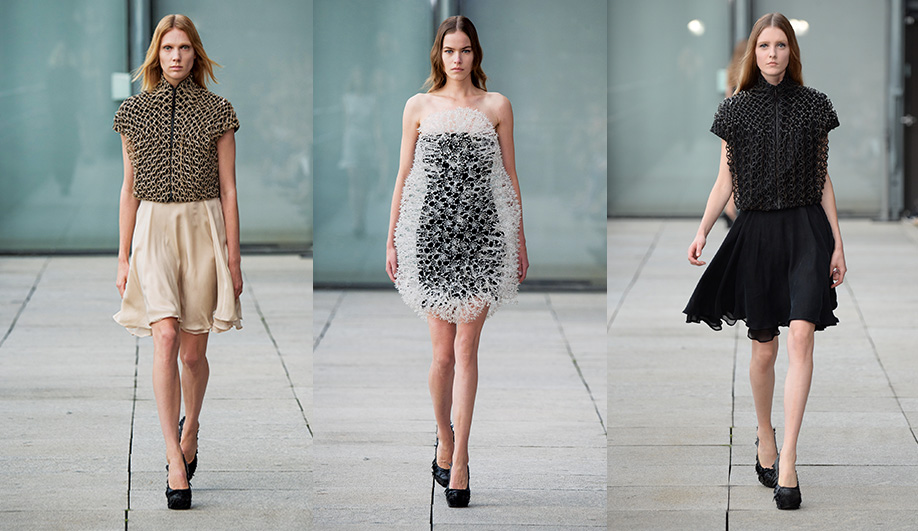 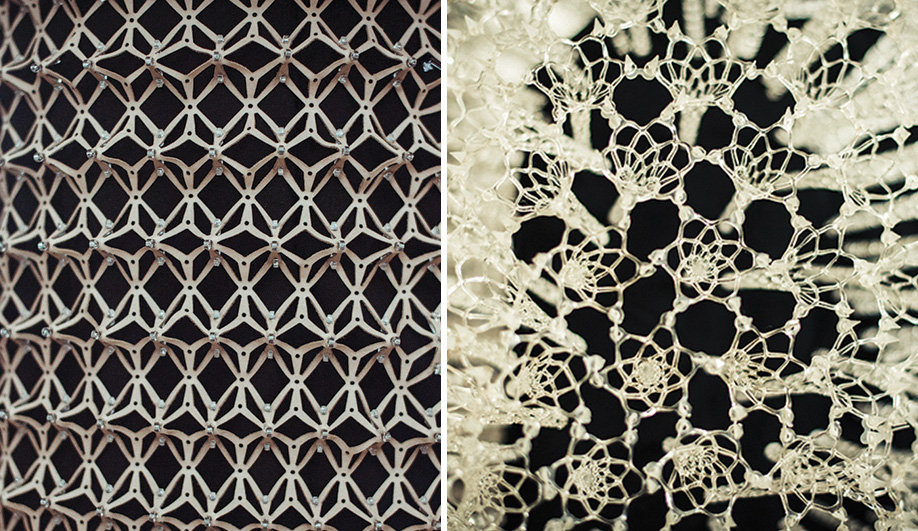 A rhombic pattern of suede strips is linked with acrylic connectors

Dutch fashion designer Iris van Herpen is well known for her sculptural, intri­cate­ly detailed 3‑D-printed couture, but when she debuted the Magnetic Motion line last fall during Paris Fashion Week, the audience was stunned. The pièces de résistance were the “halo” dresses: black silk topped with supple acrylic plumes that hovered around the models like force fields or, depending on your point of view, translucent sea creatures.

Created in collaboration with interdisciplinary architect Philip Beesley, best known for his Hylozoic Ground installation at the 2010 Venice Biennale, the collection was partly inspired by a recent visit to the CERN physics lab in Switzerland. The duo observed the dynamic patterns produced by magnetic fields 20,000 times more powerful than Earth’s; here, the idea of a fabric based on magnetism and movement was born.

For some garments, Beesley used parametric software to develop suede strips that were laser cut into rhombic patterns before being manually folded into pleats and secured with acrylic chevrons. The halo fabric – a hexagonal “crystal spar formation,” as he calls it – was also laser cut, then thermally formed into diagrids, with silicon connectors holding the acrylic sections together. The resulting fabric intentionally exaggerates movement, to the extent that the garments almost appear to be alive. Beesley and van Herpen’s next collection, Hacking Infinity, shown during Paris Fashion Week in March, further explored the same processes for making fabric.

When asked how he stumbled into fashion design after running an architecture firm
for four decades, Beesley explains his connection with van Herpen: when he discovered her 3‑D-printed couture line in 2012, he contacted her, they met, and “a long, long afternoon stretched into an evening of twisting and turning pieces of material.” They quickly realized a common interest in “the space that wraps around each human body,” whether clothing or the built environment.

Now, at Beesley’s Toronto studio, the halo fabric has inspired a light canopy system and a support for a glass table, while a large chandelier series using the same pattern is being installed at the National Academy of Art in Hangzhou, China.