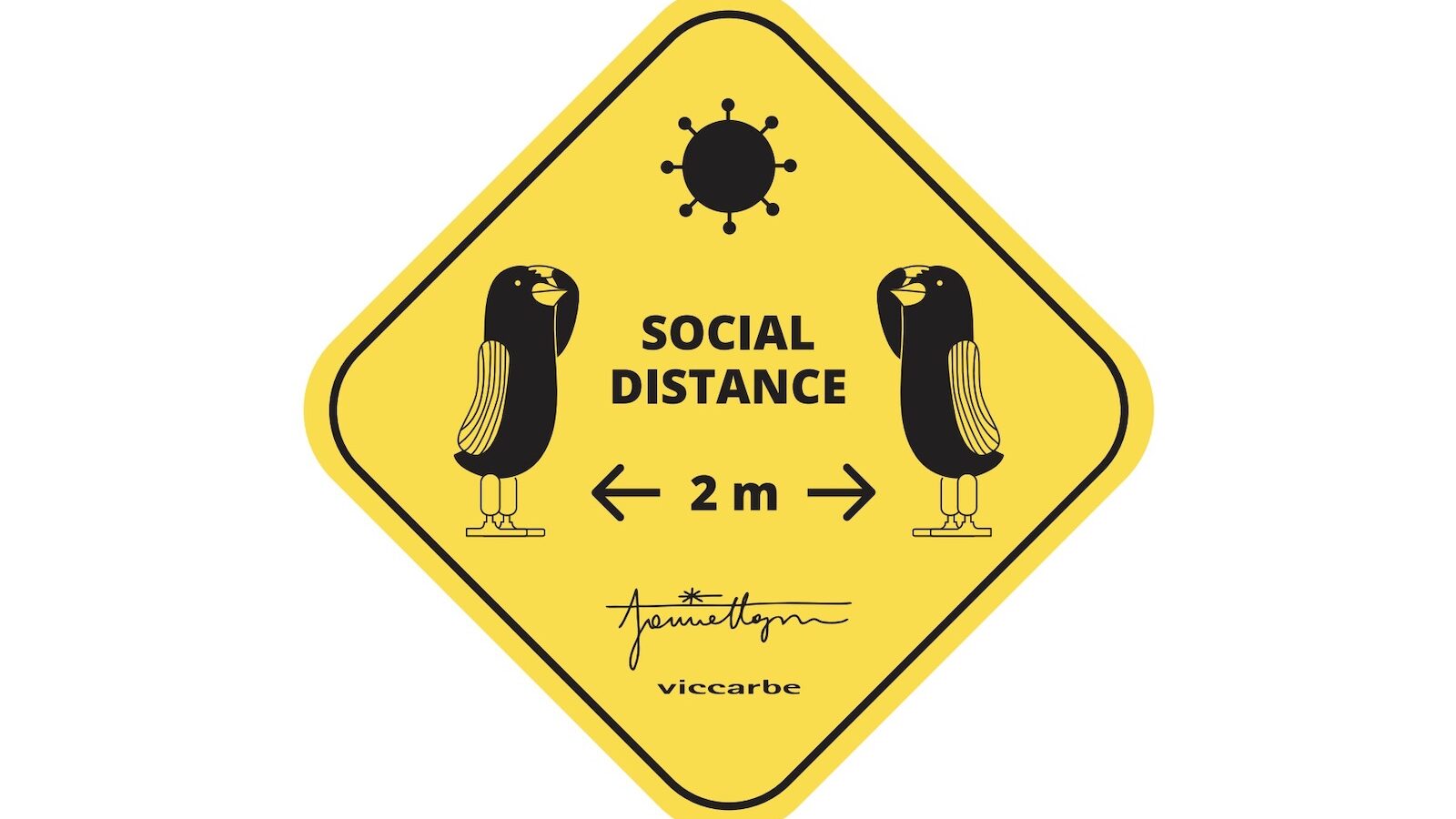 Leave it to whimsical Spanish designer Jaime Hayon to put a kinder, gentler spin on the notion of physical distancing — not as frivolous an exercise as it might initially seem.

At a time when some people inexplicably regard the wearing of protective face masks or requests to self-isolate as threats to their personal freedom, combating the spread of COVID-19 as many jurisdictions emerge from lockdowns may require the proverbial spoonful of sugar to remind recalcitrant types of their social responsibilities.

That’s where Hayon’s new signage advising individuals to keep two metres apart in public settings could prove especially useful. Created with the Valencia-based furniture company Viccarbe, for which Hayon has also designed tables and seating, the autographed diamond-shaped stickers enlist his trademark Hope Birds to deliver the messaging, their usage putting “the kindest face” possible on the need for social distance.

“Positive messages reinforce the feeling of comfort when inside a space,” says Viccarbe, contrasting Hayon’s charming graphics with the tone usually adopted in public service announcements: “technical and not that friendly.”

Hayon’s signs — which Viccarbe is offering as free downloads through its website — are available in five colours (from bright yellow to soft grey) and three different sizes (small, medium and large). For non-metric jurisdictions, the recommended distance for avoiding casual infection is expressed in feet (six, to be precise) instead of metres. The signs can be applied to a variety of surfaces, on walls as well as floors.

The goal of both Viccarbe and Hayon was “a new signage that helps to make kinder the gradual way back to social spaces, such as offices, cafes, restaurants, hotels and airports, among [other] spaces.”

While the need to cajole people into doing the right thing through cute cartoons may seem reflective of a selfish, infantilized age, the truth is that designers have long been called on to make uncomfortable directives more palatable. During the Second World War, propaganda posters bearing the catchy warning that “loose lips sink ships” cautioned Americans against the dangers of unguarded talk, while the iconic seventies-era smiley face that entreated people to “Have a Happy Day” did so at the height of the Vietnam War.

Just as those graphics were emblematic of their epochs, Hayon’s distancing campaign may become symbolic of the COVID era — something that Viccarbe acknowledges, calling this moment “a perfect occasion for having an artwork of the renowned artist … and keeping it [over] time,” the output “a sign of the so-called transitional normality that society faces today.”

In other words, download Hayon’s signage while you can. In addition to promoting healthy practices, you just may have a future icon on your hands.