The iconic landscape architect — who practices “design as a verb” — is the inaugural laureate for the Cultural Landscape Foundation’s marquee award.

Julie Bargmann wears the accolade with characteristic informality. Lauded today as the first-ever recipient of the new Oberlander Prize — a Pritzker-level honour bestowed by the Washington, D.C.-based Cultural Landscape Foundation — the landscape architect and educator reflects on the puns that informed a singular career in landscape design.

“Acronyms and four-letter words have always been a favourite of mine… and I don’t want to take things too seriously,” Bargmann says in a video released as part of the award’s announcement, as she describes how wordplay shaped both an academic career and a trailblazing design studio. On the academic side, there was D.I.R.T. (Doing Industrial Research Together). And on the design side? D.I.R.T. (Dump It Right There) Studio.

The unpretentious and uninhibited monikers hint at the revolutionary potential of Bargmann’s ethos, and a design sensibility that has pushed the practice of landscape architecture over the course of three decades. Specializing in the ecological revitalization of neglected — and often highly polluted — post-industrial sites, Bargmann playfully recalls being hailed as “the toxic avenger.”

Born in Bergen County, New Jersey, she earned a Master in Landscape Architecture from the Harvard Graduate School of Design in 1987, becoming one of the first employees of Michael Van Valkenburg’s nascent landscape studio while still a student. Now based in Charlottesville, Virginia, Bargmann founded the D.I.R.T. design practice in 1992. Driven by social equity, urban regeneration and ecological stewardship, its landscape portfolio is a riposte to the rigid aesthetic formalism and superficial beautification that defined much of 20th-century landscape design.

Many of D.I.R.T.’s early projects were focused on the remediation of so-called “Superfund” sites across the United States — named for a 1980 act to clean up areas contaminated with hazardous substances. Among the many large-scaled commissions it took on across the country were the transformations of the 200-acre Roebling Steel Plant, in New Jersey, and the 440-acre Avtex Fibers site, in Virginia. 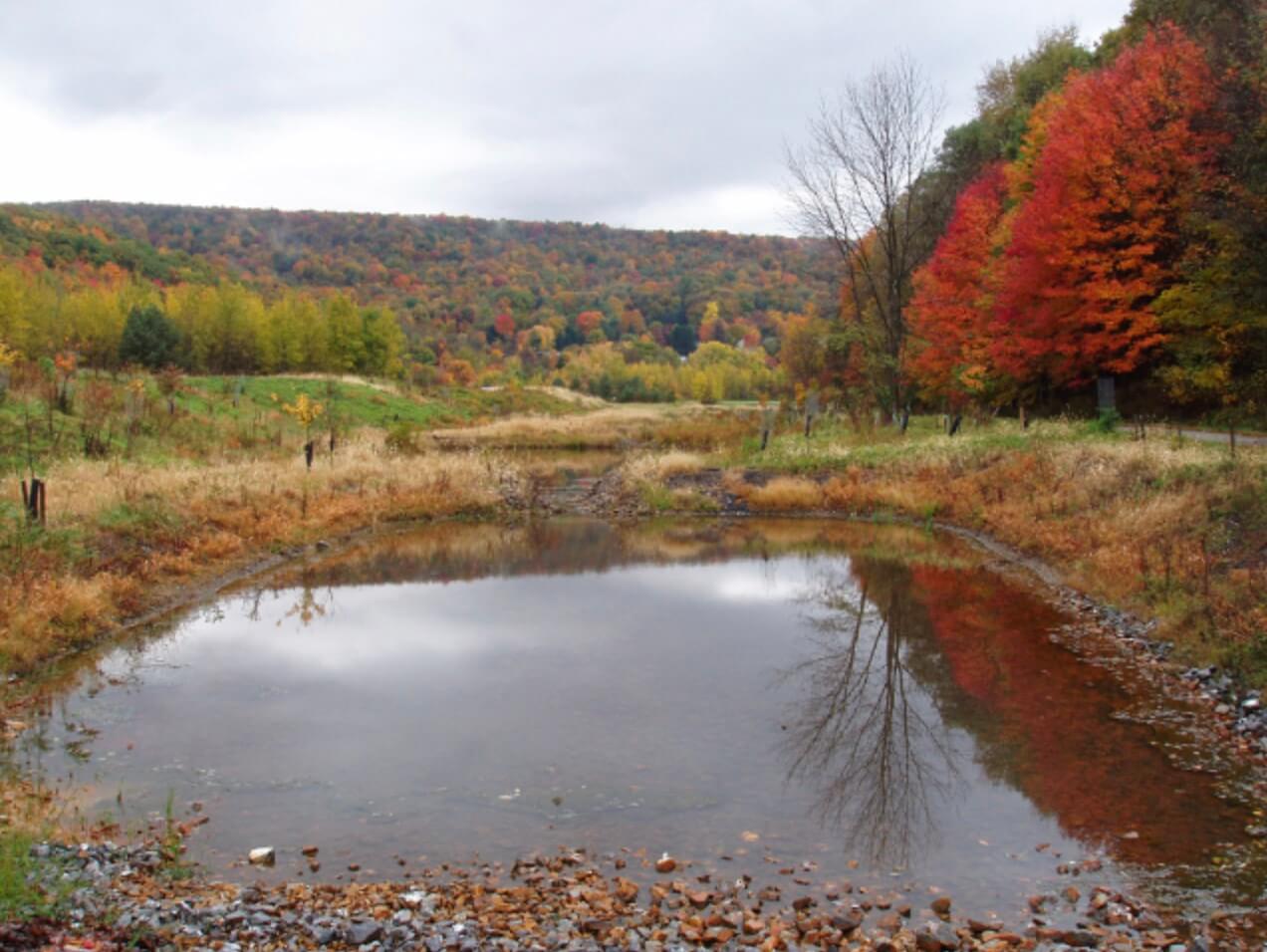 The Vintondale treatment ponds in fall.

Another seminal project, the Vintondale Reclamation Park in Vintondale, Pennsylvania, exemplifies Bargmann’s multidisciplinary approach. She worked alongside a preservationist and a hydrologist, and with local communities and governmental agencies, to create a natural filtration system for pollutants in former coal country. Here, she addressed “the devastation wrought by acid mine drainage,” remediating the toxic orange streams into a variegated landscape of water treatment, community recreation, ecological diversity and industrial heritage.

The winner of a 2001 National Design Award, the Vintondale remediation spurred a series of high-profile commissions. In Dallas, the 2002 reinvention of the Turtle Creek Pump House saw an abandoned public works project reinvented as a garden and arts centre, while the nine-year redevelopment of Philadelphia’s U.S. Navy Yard (undertaken between 2005 and 2014) culminated in the creation of a unique new headquarters for Urban Outfitters, with construction debris and old concrete salvaged as the building blocks of a democratic and accessible urban green space.

Throughout her career, Bargmann has expressed a disdain for projects that don’t meaningfully engage with both ecology and the post-industrial condition; she has referred to landscape projects that merely beautify a formerly polluted place as “putting lipstick on a pig.” Her work, instead, digs deep. The recently completed Core City Park in Detroit is a case in point: a tranquil woodland emerges from the urban rubble, furnished by generous public seating. 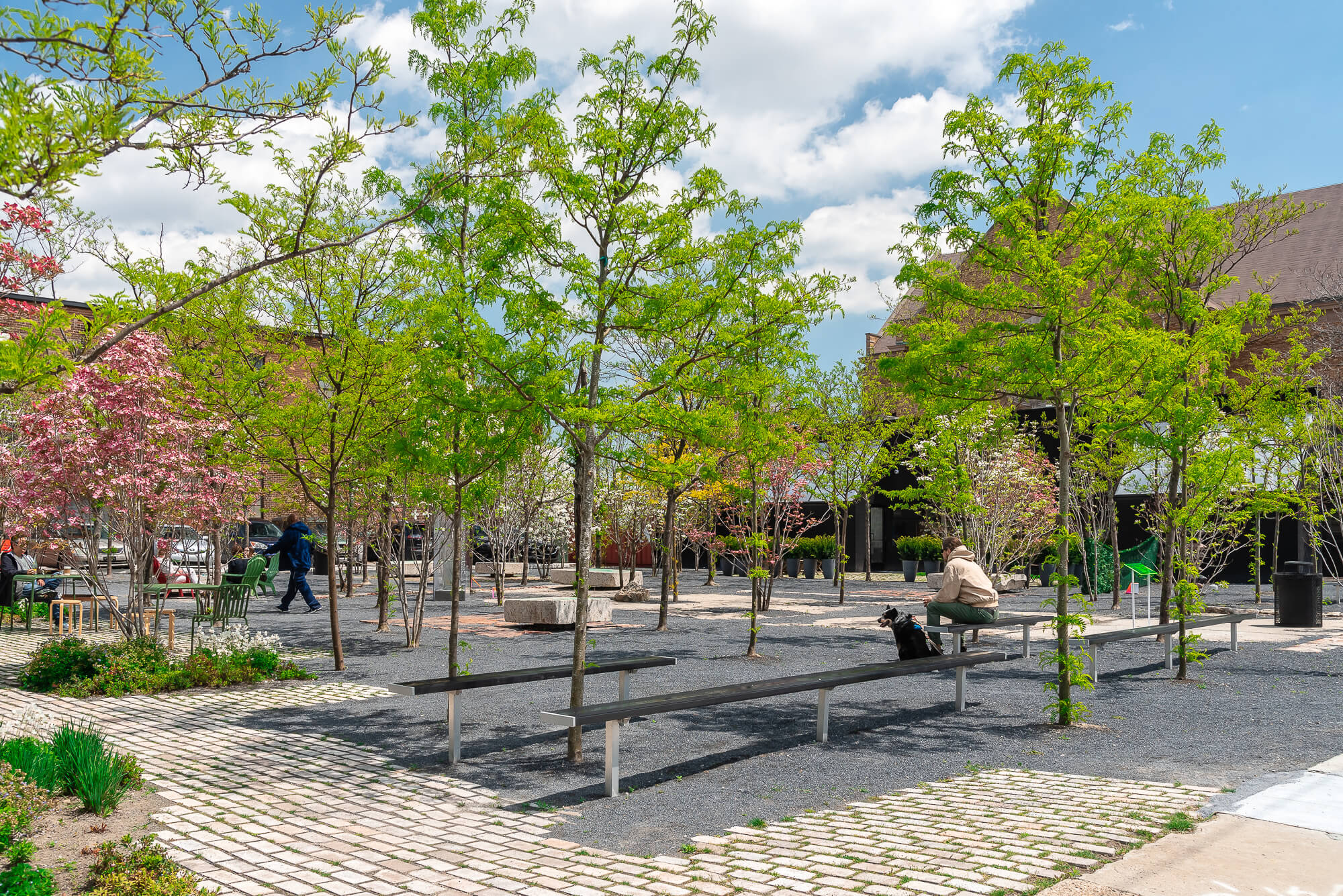 “Unearthing the raw ingredients of design from waste and wastelands defines my life’s work,” says Bargmann. The same principles have also guided her as an educator (she currently serves as Professor of Landscape Architecture at the University of Virginia School of Architecture). “Both the pedagogy of my teaching and my methodology as a designer address the social and ecological imperatives to reclaim degraded land. Integrating regenerative technologies with design propositions and built landscapes embodies my contribution to the discipline of landscape architecture.”

From the archives: AZURE’s September 2005 feature on Julie Bargmann and D.I.R.T. 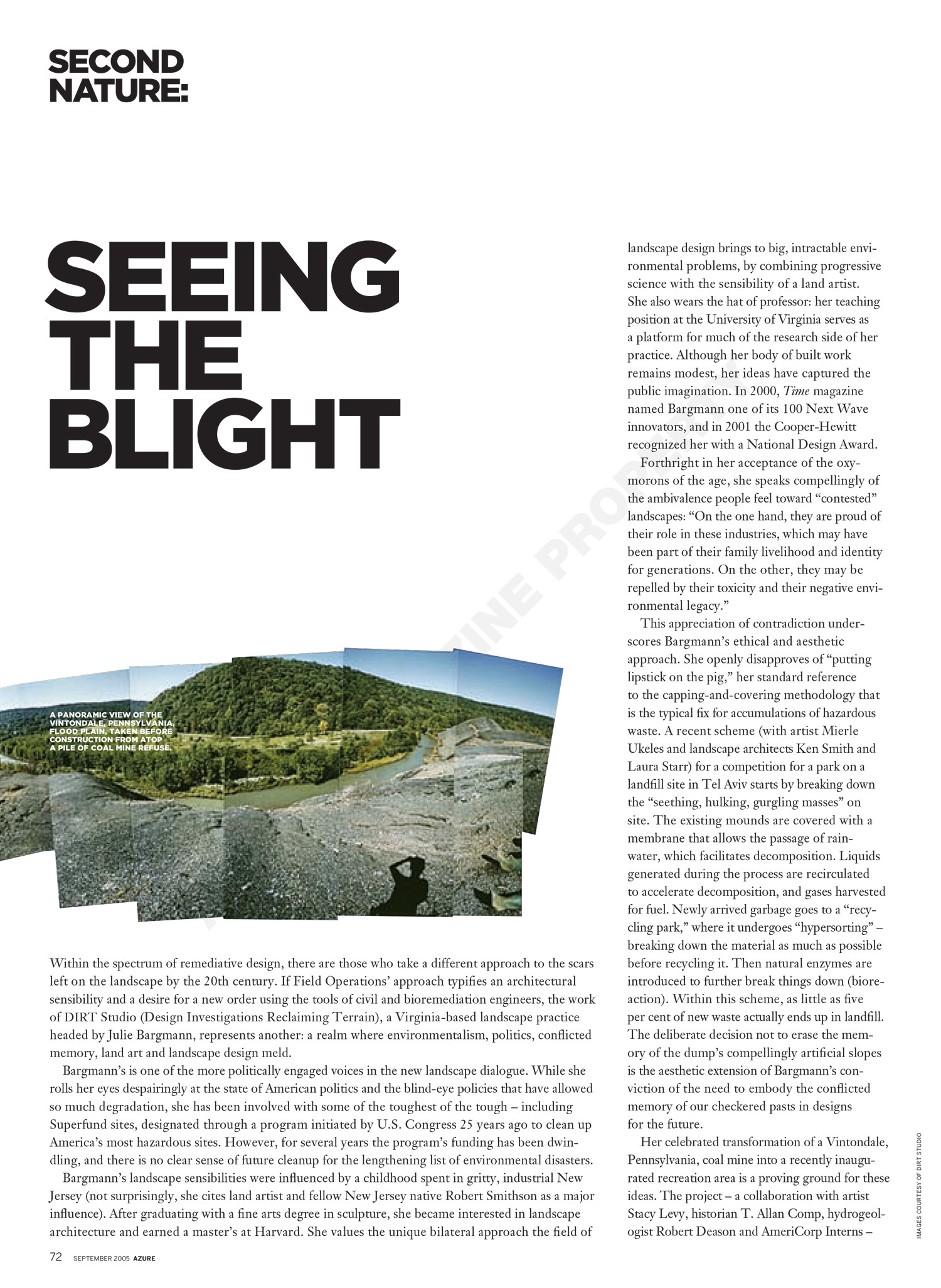 Chaired by Dorothée Imbert, this year’s Oberlander Prize jury was made up of Tatiana Bilbao, Michel Desvigne, Gina Ford, Teresa Gali-Izard, Walter Hood and Aki Omi, with the prize curated by John Beardsley. According to the jury citation, the award is a timely recognition of Bargmann’s “activist approach to practice, seeking out opportunities, challenges, even intractable problems.”

“She embodies the kind of activism required of landscape architects in an era of severe environmental challenges and persistent social inequities,” notes the jury. “In so many ways, she builds on the legacies of Cornelia Oberlander: in her commitments to the public realm, to advancing women in the profession, to the principles of ecology and regenerative design, and to engaging diverse, even conflicted social contexts.”

The iconic landscape architect — who practices “design as a verb” — is the inaugural laureate for the Cultural Landscape Foundation’s marquee award.