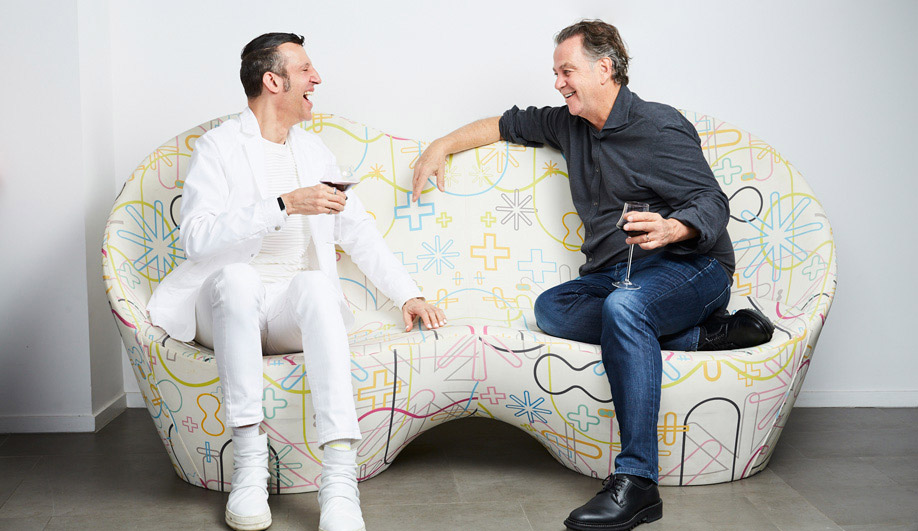 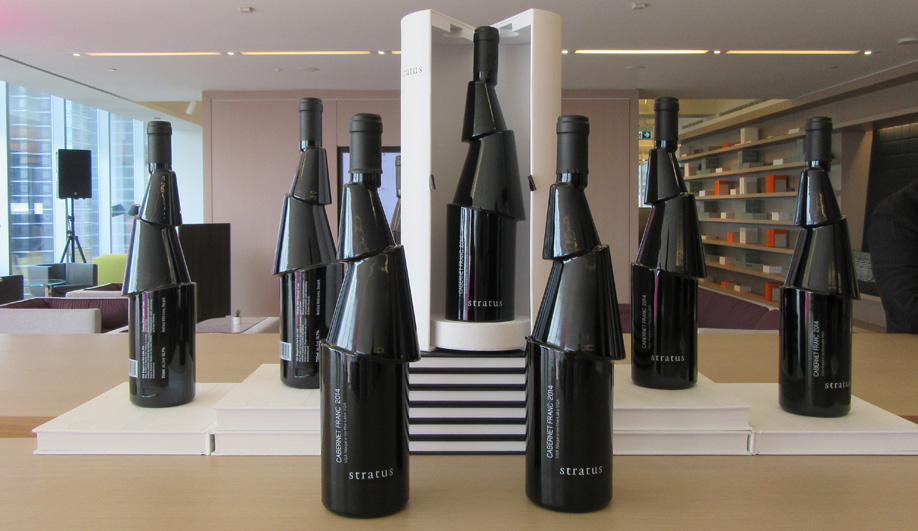 The launch of the Decant bottle took place at Teknion’s Collaboration Hub in downtown Toronto. 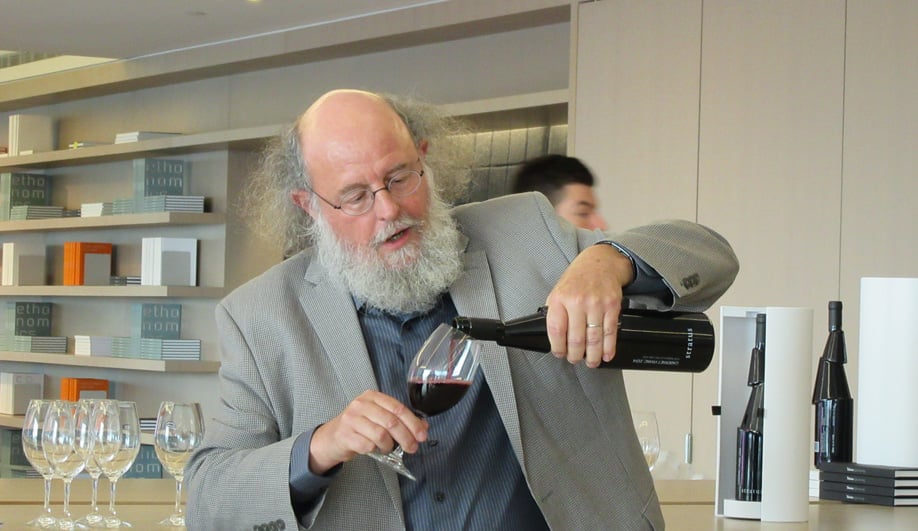 Winemaker J-L Groux has been developing complex assemblages at Stratus Vineyards since 2004. His Decant 2014 Cabernet Franc 2014 was produced in just over 9000 units and only 110 cases have been made available for purchase. 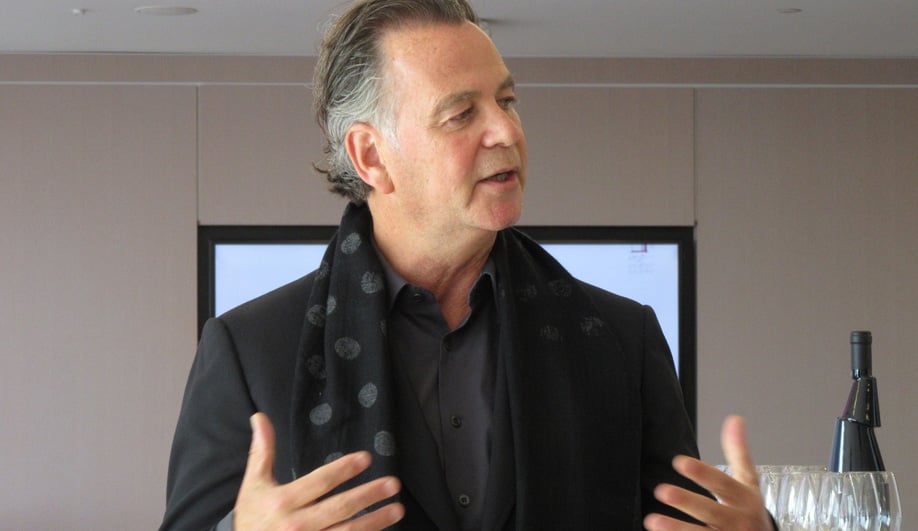 President and CEO of Teknion and founder of Stratus Vineyards, David Feldberg has been unwavering in his firm commitment to quality and sustainability. 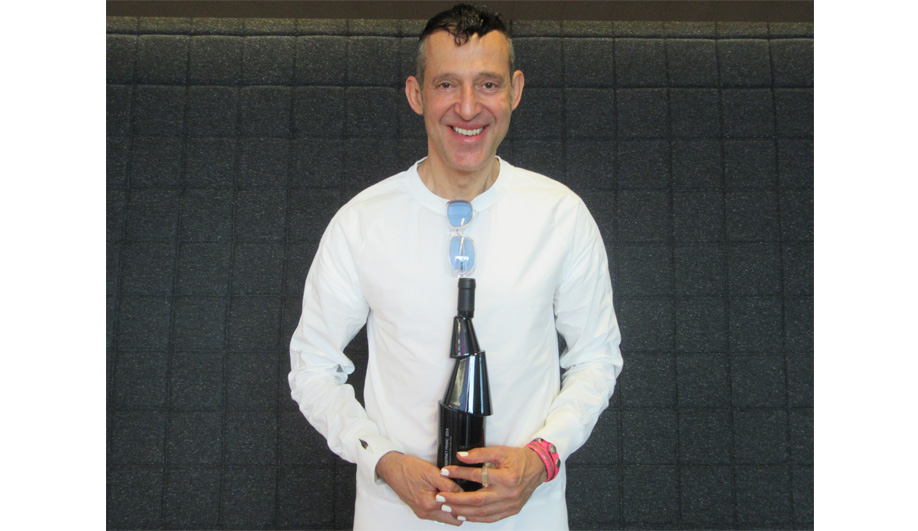 Karim Rashid has been designing products and environments for over 30 years. For Stratus, Rashid created a deconstructed bottle with decanting properties.

In Ontario’s Niagara wine region, where the vintages have gone from plonk to drinkable to sublime over the last 25 years, 55-acre Stratus Vineyards punches well above its weight. Owner David Feldberg, who is also president and CEO of office furniture manufacturer Teknion, has managed the difficult feat of moving the enterprise forward while sticking to his firm commitment to quality and sustainability. The winery is LEED certified (the first in the world), the wine-making process is gravity-flow and the French-native winemaker, J-L (Jean-Laurent) Groux, has been perfecting the old-world practice of assemblage on new world soil to excellent results.

Feldberg turned to Karim Rashid for an out-of-the-box bottle for Stratus’s first unfiltered “on its lees” Cabernet Franc, a 2014 vintage. Rashid responded with a deconstructed design that manages to reflect the winery’s patrimony – it sits on land that is underlaid with multiple layers of clay and loam interspersed with granite and limestone – as well as serve as a decanter for the naturally forming sediment in the unfiltered wine.

Is this the first bottle you’ve ever done? I remember a water bottle several years ago.
I’ve done many water bottles – six in fact, and I did a very faceted bottle for an organic vodka from Oregon. It was my first alcohol bottle and it came on the market about 5 years ago. The company was a start up and it was very important for them to do a bottle that stood out. It’s done phenomenally well for them. It’s such an usual bottle.

Well this is the most unusual wine bottle I’ve ever seen. Is there a precedent for anything this out of the ordinary?
Not in wine. In fact I said to David (Feldberg) it’s kind of nice when you consider how many countries are at the forefront of wine and yet nobody’s done it.

Everybody’s played with the label and no one has ever played with the bottle.
Zaha Hadid did a wine bottle for Austrian winery Leo Hillinger in 2013, with a few facets cut into it. I think it was one of the first in the wine industry. We were actually ready a year ago, but then Stratus decided they wanted the right vintage to bottle. So the bottle was ready almost a year ago but we waited for this vintage (2014 Cabernet Franc). 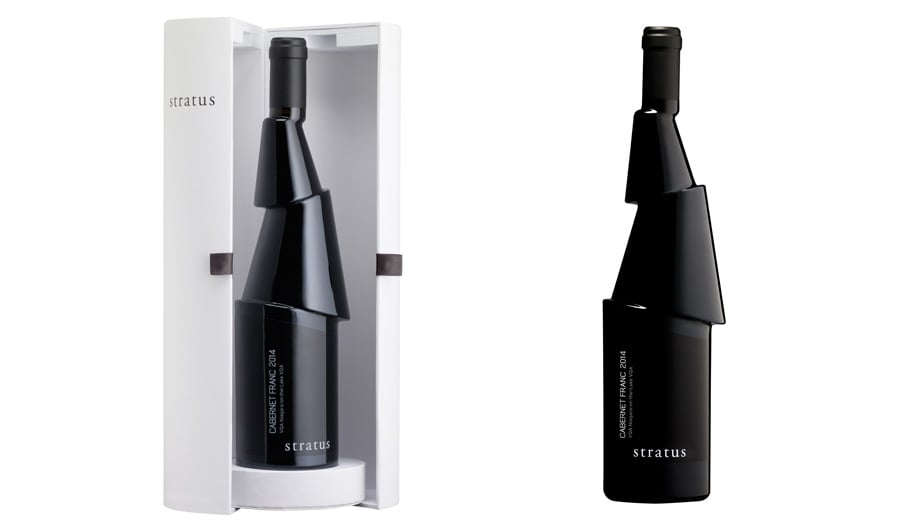 Let’s talk about the architecture of this bottle. How that relates to the rest of your oeuvre. It has a more “deconstructed” feel – which is not how I would describe your work in general.
All artists are sort of pigeon-holed. People know you as one line, they want to remember you as one thing. Warhol is one thing for the majority, yet if you look across his body of work, he went all over the place. Even Picasso went all over the place, but at the end of the day people recognize him for one thing, one language. If you look at a lot of well known designers, they do have a lineage, especially of form, across the board in their work.

If I look back at my work it’s all over the place. I designed a perfume bottle for Issey Miyake that’s pure form. So from a form point of view, I’ve gone all the way from extreme minimalism to maximalism. With every project, I try to embrace the subject. I would say, “form follows subject.” If I can embrace the subject, I’m really going to do something interesting and new. If I just keep my same vernacular, “oh I like a blob shape”, and I repeat myself, I’m being very superficial. So I think when you drive things from content, you experiment and you find something new, you find a new opportunity. Even though this [bottle] is deconstructed, if you look at that vodka bottle, it’s super faceted. Ten years ago I did a faceted chair for Vondom, and now it’s all over Milan. Everyone said, “a black faceted chair from Karim? But he’s pink and blob.” I need to experiment and I need to push myself. I’ve been designing now for 35 years. I can’t go to sleep at night repeating myself; I want to do things I’m really proud of.

So would you say that this represents a new direction?
No, this is for this project and it works for this product.

And it’s interesting that it ended up working from a functional standpoint on a level that you hadn’t imagined at the beginning.
Yes, the decanting part. I remember saying years ago that I didn’t believe in accidents and I think those things are in your subconscious. When winemaker J-L Groux talked about the “strats” of the earth [in reference to the complex geology of the ground below the winery] he was referring to where the name Stratus comes from. When I first started drawing this object I was probably thinking about the name, their identity. That’s where the shifts came from, and then I started pushing it because I’m so tired of the archetypal wine bottle and the immediate thing for me was to break it up. You should see some of the other bottles, there are ten of them. In fact I was going to post them on Facebook – ten bottles in a row (Ed.: the sketches are embargoed).

So this was the beginning of the exploration, you came back to the deconstructed version?
Yes, for example there was one bottle, that was almost the same bottle but in the middle there was a cube.

So you started here and you did ten in the middle and came back here?
That’s happened a lot, actually. I’ve noticed especially in the last ten years. You know when get to a point of maturity with your work when the first thought is the best. As a result of your education – especially when I was at Carleton University – you are taught that you must be rigorous and explore every possible scenario. So I was brought up with that, but the fact is that I’ve gotten to the point now where because of my intuition – which is really not intuition, because it’s based on decades of experience – I know the answer from the beginning, but I still make the mistake of doing way too much work.

I think there are times when we need to substantiate our thoughts and it’s kind of clarifying to do that walk around the block.
Yes, but from a business perspective…The problem with creative people is that we do these things out of passion. Yet we are in a world of consumption. What we do is actually contributes to consumption. It’s all capitalism at the end of the day. So all these designers all over the world are ready to do anything for nothing, yet the company is going to capitalize on that thing you do. This is our mistake in a way.

Only 110 cases of the Decant wine are available, through Stratus in Canada and Paul Hobbs Selections in the United States.