Inside the Wooden World of Kengo Kuma
Japanese architect Kengo Kuma shares his thoughts on building Tokyo's National Stadium, his usage of wood and his projects in the Pacific Northwest. 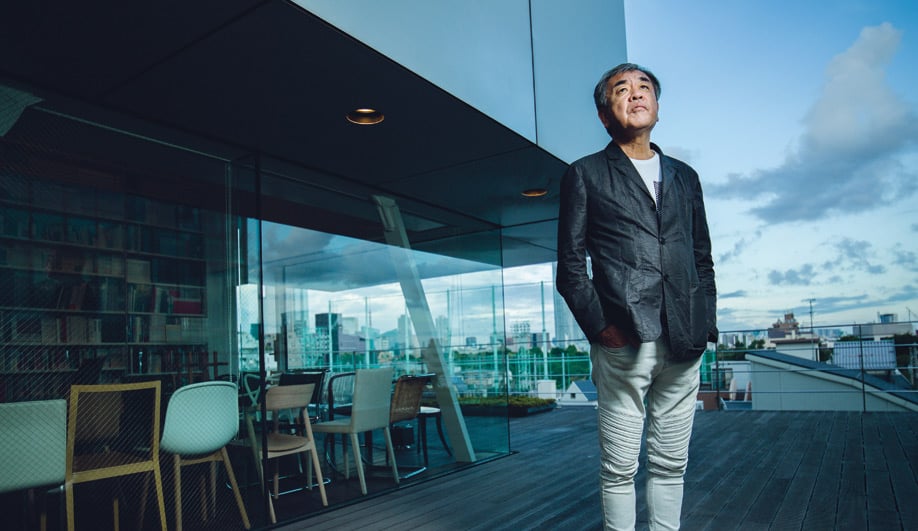 Kuma stands on the terrace of his firm’s headquarters in central Tokyo.n

Japanese architect Kengo Kuma shares his thoughts on building Tokyo’s National Stadium, his usage of wood and his projects in the Pacific Northwest.

A few minutes past 10 p.m., Kengo Kuma enters the rooftop conference room of his four-storey headquarters in central Tokyo. Just back from a working trip to France and China, he is wearing a black blazer and camouflage-patterned loafers. It’s another late evening for the indefatigable 63-year-old. A professor at the University of Tokyo, Kuma is currently at work on projects in Turkey, the U.K. and Indonesia, among other countries. Across the Pacific, he has also been generating buzz with a handful of new projects in two West Coast cities: Vancouver and Portland.

The highest-profile project of his career, however, has just broken ground a mere three blocks from where we sit. Kuma secured the commission for Tokyo’s new National Stadium after Prime Minister Shinzo Abe reversed the results of the original competition, won by Zaha Hadid. The controversy surrounding the reversal, including a subsequent accusation by Hadid of plagiarism, doesn’t seem to have dimmed Kuma’s sense of pride in designing the 68,000-seat venue that will host the opening of the 2020 Olympics. More recent charges that the concrete formwork might include unethically sourced Borneo plywood are also unlikely to quell his enthusiasm for building with wood, the common denominator in just about all of his work.

After one of his firm’s junior architects arrives with two cups of espresso, Kuma quickly drains his, leans back in his chair and crosses his legs. He is ready to talk.

First of all, I have to ask about the Japanese characters you use to write your name. The name Kuma is often represented by the kanji for “bear,” but yours is different.
True. It means “corner.” There are very few Kuma who use this kanji.

And Kengo?
Not normal, either. For me, “Ken” means “study” and “Go” means “myself.” So I learn about myself.

How did you decide to become an architect?
I was 10 years old when the Olympic Games first came to Tokyo in 1964. We lived in Yokohama. That fall, my father brought me to Kenzo Tange’s swimming pool at Yoyogi National Gymnasium. I was shocked to see that building. It was so different. Before that, my dream was to become a veterinarian because I love cats. Afterward, my dream changed. I wanted to become an architect. Seeing Kenzo Tange’s building changed my life.

So it must fill you with strong emotions to now be designing the stadium for the 2020 Olympics?
When I was asked to participate in the competition for the new stadium, I felt this as a kind of destiny.

Does your new National Stadium design carry any similarities to the Kenzo Tange gymnasium that first inspired you?
I think the 2020 Olympics should be very different from 1964. For Japan, 1964 was a moment of industrial and economic expansion. We had big dreams. Now, the nation has matured. In some ways, we lost those dreams. In this new age, we are trying to find the happiness that comes after the dream.

Many people are sort of struggling to find this post-industrial happiness today. How can a stadium tackle that challenge?
This location is very important. The Meiji Shrine complex [adjacent to the stadium site] is different from other parks in Tokyo. It’s a spiritual place for us. I want to create a kind of spiritual stadium. We decided to use wood as the main material. It’s the opposite message from Kenzo Tange’s method. In 1964 he used concrete and steel to show how much Japan had achieved after the war. Now, after the boom of the 1980s, Japan is reaching another step. I want to show that new step.

Let’s talk about wood. You’re known for using a lot of it in your constructions, and there are a lot of samples downstairs in your offices.
Well, the wood for the stadium includes some larch and hinoki cypress, especially on the roof. But it is mostly cedar throughout.

In Japan, you call cedar sugi.
Yes. Sugi is very important for Japan. It’s a soft wood with a good smell. Visually it’s very beautiful, but at the same time sugi is very sensuous to me. Everywhere in Japan you will find different sugi. In fact, we decided to source sugi from all 47 prefectures in Japan. To have some participation from every prefecture was very important for the project.

How does the cedar change across prefectures?
Sugi shows the difference of the climate of each place. In the south, the sugi is very soft, and the colour is very vivid. In the north, sugi is relatively hard. The diversity of Japan is represented by all the different regional qualities of sugi. 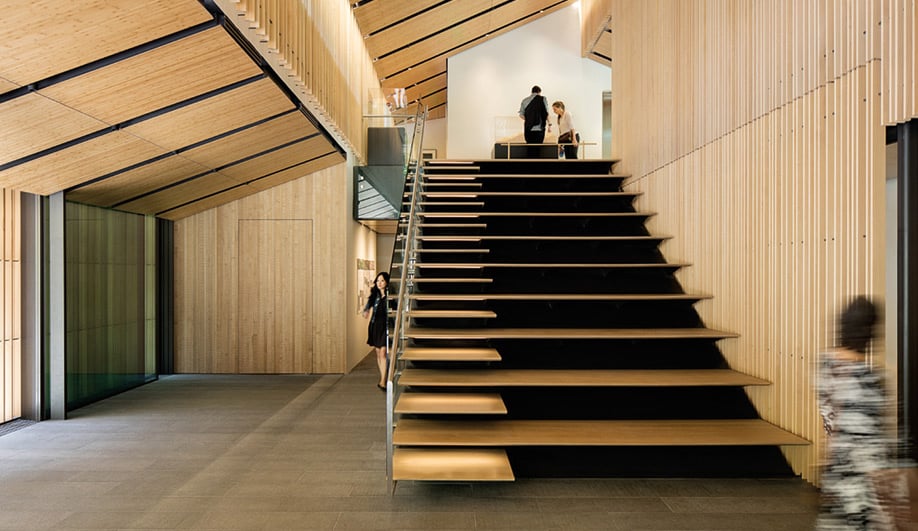 The three pavilions at Portland Japanese Garden were made with local Douglas fir.

You have called Meiji Jingu park a sanctuary for the people of Tokyo. Many urban parks in North America are wildly different from those in Japan. You have just completed a project in Portland – a new “cultural village” for Portland Japanese Garden – that aims to bridge the gap.
In Japan, garden is garden, city is city. But in Portland, the garden and city are very much connected. Portland has one of the best Japanese gardens outside of Japan, and the people in Portland consider this garden a part of their life. I think that kind of relationship between the city and the garden is not so often happening in Japan.

When you won the competition to design the cultural village – a trio of new LEED-certified pavilions including a teahouse – did the place strike you as a truly Japanese garden or as an American imitation?
Well, the garden curator is Japanese. And for the whole history of this garden, which is now celebrating 50 years, they have had a Japanese curator. For Japanese gardens, the maintenance is very important.

We’re not so well instructed in the fine art of raking moss.
We wanted to make this place even more approachable to people. We did our design as an interface between the community and the garden. In front of the previous gate, we designed a kind of village, including the lecture hall, shops, a café. There’s even a landscaping school to teach Japanese gardening. I think many more Americans are becoming interested in how to make Japanese gardens. But even in Japan, we don’t have this kind of school. We have university training, but it’s a very formal education.

You obviously used lots of wood, given the Pacific Northwest setting.
Yes, the wood is a local Douglas fir. It’s a very beautiful wood. 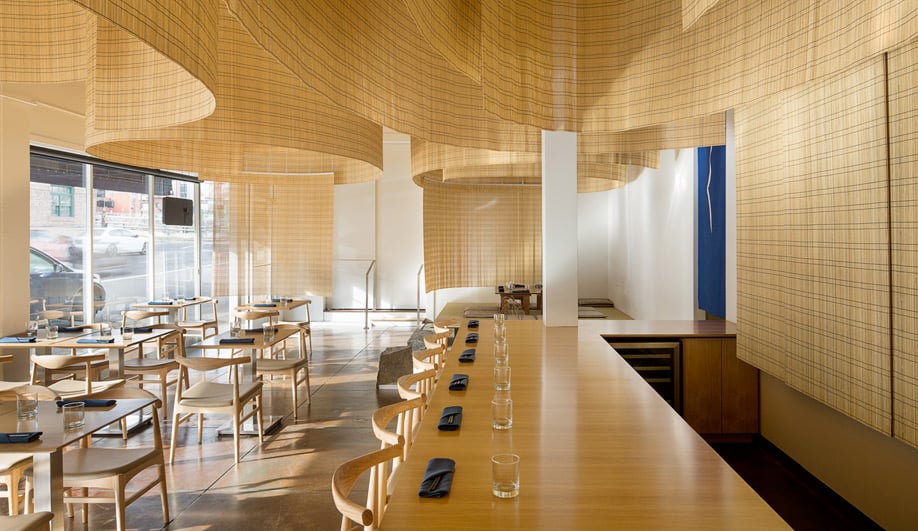 On a much smaller scale, you have designed Shizuku, an organic restaurant in Portland.
Yes, for chef Naoko Tamura, who comes originally from Tokyo. In fact, Naoko is working with the Japanese Garden to make the bento boxes for the café. For her restaurant, we imported Japanese bamboo to create sudare, which are woven screens of thin bamboo.

You’ve been crossing the Pacific a lot lately, but not just to Portland. Tell me about your work in Vancouver.
I was invited to work on a residential tower by the developer Ian Gillespie and his practice, Westbank. Ian loves Japan and visits often. He also loves teahouses. 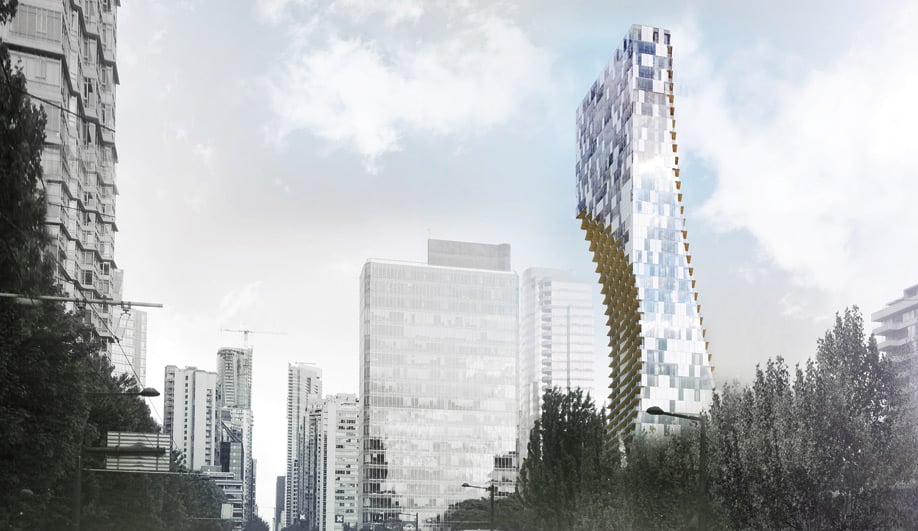 So you built him one?
Correct. We began to develop the idea for Alberni by Kuma [a 43-storey glass-and-anodized-aluminum tower faced with lattice-like Douglas fir screens]. I also designed a Starbucks for one of his buildings using new Japanese carbon fibre technology to suspend the counter from 20-metre cables. Very challenging, actually. And I created this teahouse on the terrace at the top of Shaw Tower. The uniqueness is that it’s very open to the environment. A Japanese teahouse is a kind of enclosed space with very small windows. This one is on the 19th floor. 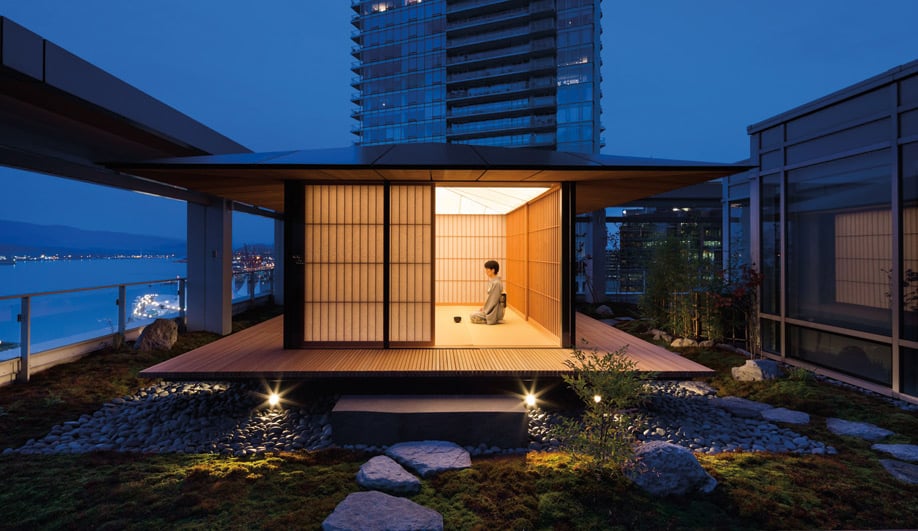 Kuma’s teahouse at Shaw Tower in Vancouver sits on a terrace on the 19th floor.

The skyscraper teahouse is not traditional in Japan?
If it is, I haven’t seen it. From this teahouse you can see the Pacific Ocean and also the mountains.

How does your style adapt to a project like a tower in Vancouver?
Well, most Vancouver buildings are glass skyscrapers. The glass curtain wall separates exterior from interior. We’re using wood as a framework material and thinking a lot about the in-between spaces. In Japan, we have this idea of engawa. It’s the space on the edge of a structure. So, even for skyscrapers like Alberni, we are thinking about engawa space.

This story was taken from the October 2017 issue of Azure. What do you think? Send your feedback to editor [at] azureonline [dot] com. Buy a copy right here, or subscribe to the magazine here.