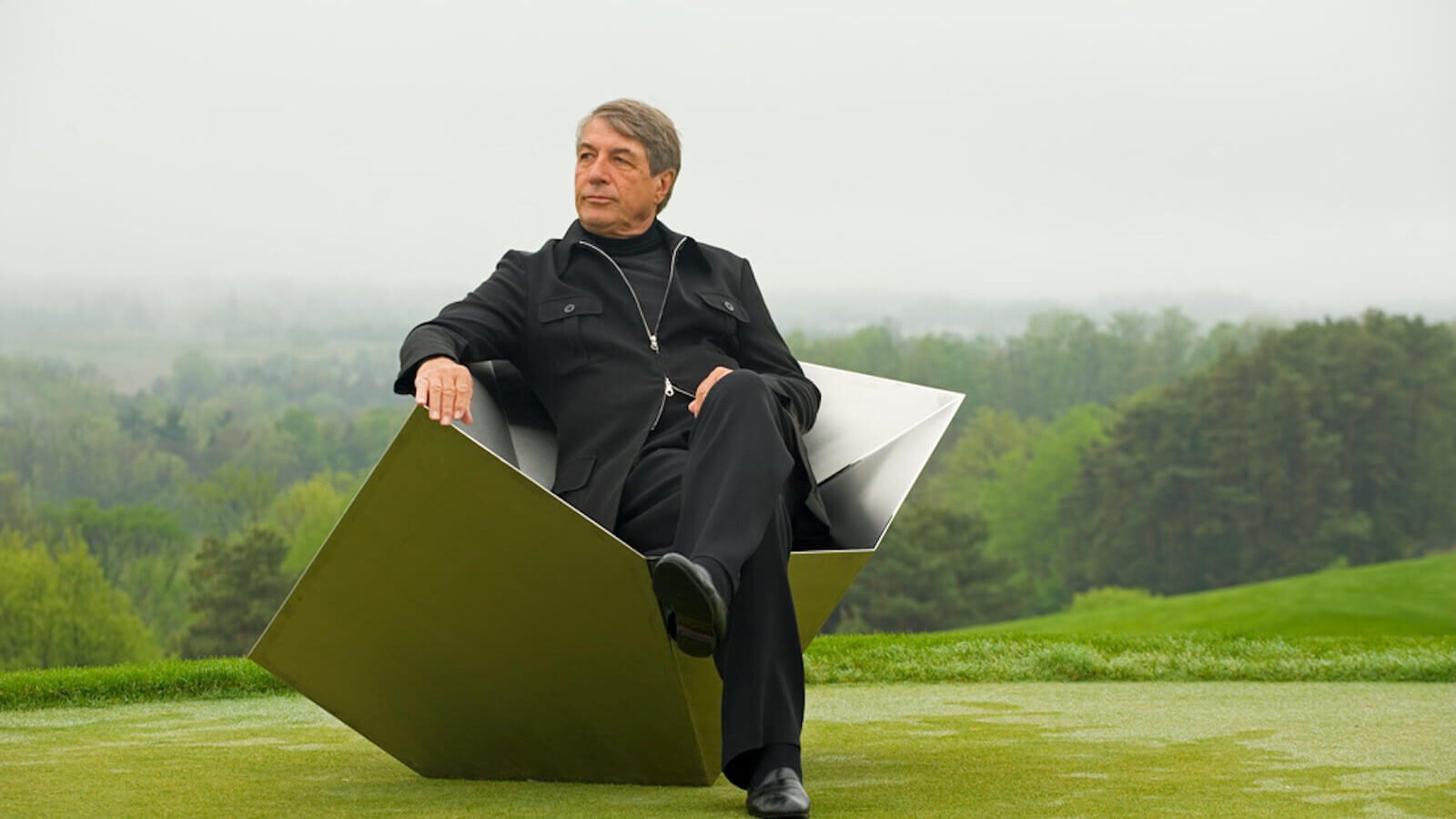 In 2008, on the occasion of his company’s 40th anniversary, Klaus Nienkämper reminisced about some – but by no means all – of the chairs he’s loved before. Read this archival interview never before available on our website.

Editor’s Note: Since establishing his eponymous furniture manufacturing business in Toronto in the 1960s, Klaus Nienkämper has been a revered champion of contemporary design. Working with a roster of talents from Canada and around the world, the brand continues to produce exciting office collections, including the recently released Heartbeat sofa by Karim Rashid. Published in 2008, this story about some of Klaus Nienkämper’s favourite chairs over his long career has never before been available online. It’s one of many exclusive interviews we are sharing on the occasion of Azure’s 35th anniversary.

Although tables, case goods and shelving account for a large share of his company’s business, it’s fair to say that Klaus Nienkämper is a chair man at heart. He doesn’t just run a company that makes chairs: he haunts auctions and vintage dealerships in search of designer seating he feels compelled to own. He and his wife, Beatrix, have a house in Toronto and a farm outside the city – and both are, in his words, “terribly overchaired.”

In the summer of 1960, the cargo ship Francisca Sartori departed on a transatlantic voyage from Hamburg with 12 passengers on board. Among them was 20-year-old Klaus Nienkämper, a native of Duisburg, an industrial city near Dusseldorf. From an early age, he had helped out in his family’s antiques shop. After graduating from high school, he completed a furniture retailing apprenticeship and honed his appreciation of modern design by working for Knoll International. Nienkämper shared a cabin with the ship’s crew on the voyage, his passage a Canadian government loan he would later repay, at $10 a month.

By 1962, he had joined with designer David Bain in setting up a company in Toronto called Swiss Design of Canada, which manufactured modern Swiss furniture under license. Bain gradually phased out his involvement, and in 1968 Nienkämper took over the business and gave it his own name.

Under his leadership, the company has evolved into one of North America’s most respected manufacturers of furniture for the contemporary work place and other contract and residential environments. Working with such designers as Arthur Erickson, Karim Rashid and Daniel Libeskind, Nienkämper has produced furniture for projects ranging from Pierre Trudeau’s Parliament Hill office to the recent Michael Lee-Chin Crystal at Toronto’s Royal Ontario Museum. When Nienkämper’s downtown showroom opened in 1968, it offered Toronto’s aficionados of modern design a glimpse of new pieces by Europe’s most influential designers. Today this perennially stylish space is a high-end furniture store, catering primarily to the residential market and run by Klaus and Beatrix’s son, Klaus Jr.

On the eve of Nienkämper’s 40th anniversary, to be celebrated officially in April 2008, Azure contributing editor Pamela Young met with the company’s founder to talk about one of his favourite subjects. In that glorious baritone voice of his – the aural equivalent of fine brandy and a blazing fireplace on a foul night in November – Klaus Nienkämper reminisced about seating that has meant something to him over the decades, and discussed how the sustainable design movement is influencing the shape and construction of chairs to come.

1964
LUCERNE SOFAS AND UNESCO CHAIRS, BOTH BY ROBERT HAUSSMANN, MANUFACTURED UNDER THE DIRECTION OF SWISS DESIGN OF CANADA

“We had a government contract for the furniture for the first lounge at Toronto International Airport before we had a factory. We had Leif Jacobsen doing the upholstery in one place and someone else doing the metalwork in another, and so on. I had a station wagon, and I carted the parts around. I visited with everyone and cracked the whip to make sure the furniture would be ready on time. Excessive use of materials is not fashionable now, but I still think this was a fabulous space.”

“This was a very frivolous thing to do – something that we could hardly afford. In the early ’70s, Dino Gavina [the Italian manufacturer who had revived such Bauhaus pieces as Marcel Breuer’s Wassily chair] started a company called Simon Collezione. We brought their Ultramobile collection – including two chairs by [Chilean-born surrealist artist] Sebastian Matta, produced in a limited edition of six, and some production pieces – over to Canada for an exhibition at the ROM. I bought one of the Matta chairs, Sacco Alato, which means ‘winged sack,’ for $4,000. We had it in our living room for years, and I thought we’d never part with it. But recently one of the other five sold at Sotheby’s for $60,000. Shortly after that, I got a call from someone willing to buy mine for that amount. People sometimes ask me what a chair like Sacco Alato has in common with most of the furniture we manufacture. What I say is, this is the fun stuff; the other stuff is work. It’s important to do both.”

“In the mid-’70s, we became a licenced manufacturer for de Sede [a Swiss company best known for fine leather furniture], and for a time in the ’80s we were manufacturing de Sede designs for all of North America. This was an absolutely enormous piece of furniture for a hospital in Fort McMurray, Alberta – I think it was 200 feet long. I asked the interior designer, Carolyn Tavender, why they were spending so much money on Fort McMurray, and she said it was to attract doctors. The oil sands development was just starting, and it was dismal place then.”

“[The late Canadian designer] Thomas Lamb started to design for us after he basically attacked me for doing all these foreign pieces. He said, ‘When are you going to do something for Canadian designers?’ I said, ‘Well, do something for us’ – and he did. At the time, we were going from lounge seating into the executive office, without actually knowing how to make wood furniture. We were also manufacturing under licence for Knoll in the ’70s and ’80s, and we were afraid they would get their nose out of joint if our own production looked too contemporary. We decided to take our own pieces in a more transitional direction, and Tom did an incredible job with that.”

“[Former Knoll design director] Richard Schultz originally designed this as an outdoor chair for Knoll, which decided not to proceed with it. He asked if we could reinterpret it as an indoor chair in leather. We’ve had marginal success with it. Richard was a sort of a minimalist, and this was different from what most designers were doing at that time – it was light, and everything else was heavy. Today, when everyone is trying to use materials responsibly, a chair like this would probably play a greater role.”

1988
THE CHANCERY OF THE CANADIAN EMBASSY, WASHINGTON, D.C.. FURNITURE BY FRANCISCO KRIPACZ AND ARTHUR ERICKSON, MANUFACTURED BY NIENKÄMPER

“Francisco Kripacz was Arthur Erickson’s design director, and they worked together a lot. It’s hard to say where Arthur’s involvement in furniture designed for his buildings ended and Francisco took over. For us, dealing with the government officials and dealing with Arthur was like walking through a minefield. We just had sketches to work with, and there was huge pressure in terms of deadlines, so the luxury of experimenting wasn’t there. I think the embassy is still a very impressive installation. The last time I saw an interview with the Canadian ambassador in his office, everything was still there. I was very pleased.”

“This was a failure, but an interesting failure. Basically, it’s an invention by [American designer] David Rowland; the core of the seat and back is a sort of spring that provides wonderful support. It was beautiful to sit on, and we used it everywhere in the Toronto Blue Jays offices at SkyDome [now the Rogers Centre]. But we could never get the price down to where it should be for something like this. I once asked [Vitra CEO] Rolf Fehlbaum why this one didn’t work, and I’ll never forget what he said: ‘This chair has a beautiful inner life, but nobody is going to pay you for it.’”

“Hilary Weston commissioned eight of these chairs for her husband Galen’s polo team, and she also commissioned one for Prince Charles and one for Margaret Thatcher. The design is based on British campaign chairs that would have been used, I guess, for sitting in front of your tent in Africa, drinking gin. But those chairs didn’t fold, and this one had to: Prince Charles would arrive at a polo match and pull a folding chair out of the boot of his car.”

“George [Yabu] and Glenn [Pushelberg] came to us with an enormous chair, and I was able to persuade them that something a lot smaller would sell much better. The designers had it on four legs when they brought it to us. I said it looked like it should have a swivel base, I think because it reminded me of ’50s pieces. We did a version with four legs, and we did a swivel version, and we do sell more with the swivel base.”

“This version of the HAB isn’t the easiest chair to make – we’ve had problems with moulding the wood – and unfortunately this one doesn’t live outside. [The traditional outdoor Muskoka chair was a source of inspiration for the architects who designed it.] But I like the wood version better than the aluminum one. I think it’s a wonderful chair. I have a friend who has a very exquisite house in Vancouver, and he used it in the guest bedrooms that look out over the rainforest. It’s very appropriate for that. We recently received an order for two from the Aga Khan’s Geneva office.”

“For those spaces where you need something a bit more fun, that’s where Karim fits in. But I don’t know that we’d want to be doing something that looks like the Kloud chair five years from now. You can’t have excessively moulded foam pieces anymore – that’s huge blobs of oil right there – although actually there’s less foam in Kloud than you’d think. We build a laminated wood construction inside it to minimize the use of foam. And we’re now working with the first foam that’s part soy.”

“Ryann Aoukar, who used to work in Montreal and now works with Gensler in New York, came to me with what I thought was a very interesting piece. It was totally over-scaled and over-materialed. He was adamant that he didn’t want any changes to it, and I said, ‘Well, I don’t think it’s going to go anywhere looking like that.’ Gensler also wanted it scaled down and lightened up, and we were able to do that. This one was just introduced, and it’s already taking off. I’m very happy with it.”

“The design process was interesting. I still have the first concepts, which were just not possible – all glass and leather. But Daniel is very easy to work with. I asked him if he’d consider making a model, and he made a whole bunch. We took some licence and made it into a chair you could actually sit in. We built a mock-up in the factory. He came to see it, and he was ecstatic. I think this chair’s going to be around 100 years from now – it has that kind of quality.”

This article originally appeared in the March/April 2008 Issue.

In 2008, on the occasion of his company’s 40th anniversary, Klaus Nienkämper reminisced about some – but by no means all – of the chairs he’s loved before. Read this archival interview never before available on our website.