How Skateboarding Sparked the Practice of This Vancouver Design Duo
Knauf and Brown - who made our list of the most exciting Canadian product designers of the moment - tell Azure about their craft. 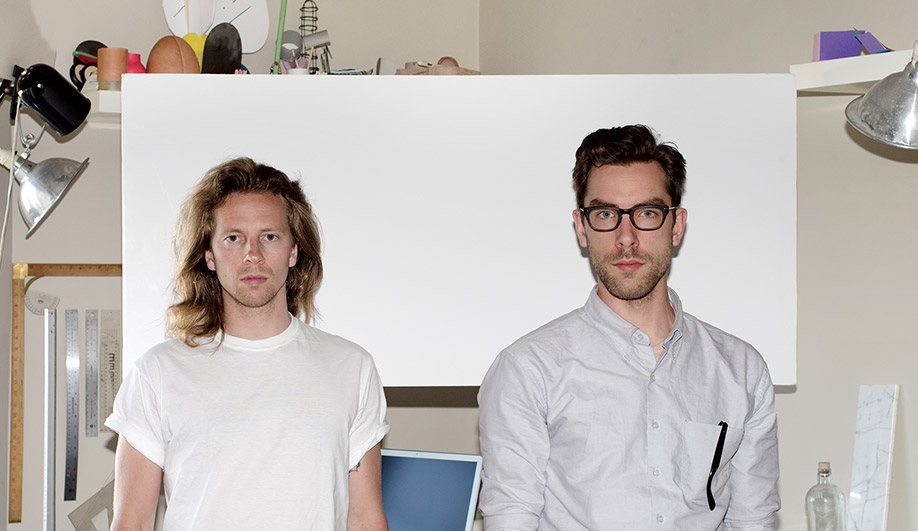 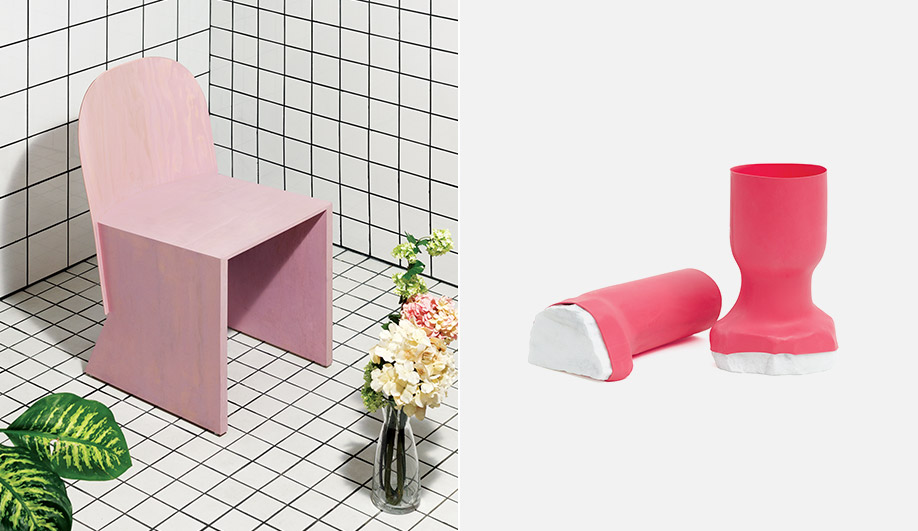 Left: The Florist Chair’s simple form is made from birch plywood. Right: IIn 2014 Knauf and Brown staged the Micro Studio live design session, where they used material offcuts to create impromptu prototypes, including these rubber-and-marble vessels. 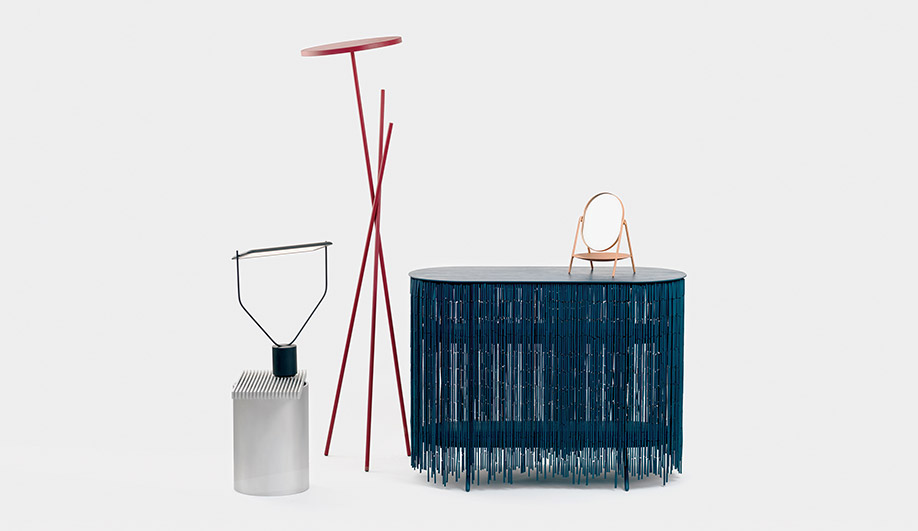 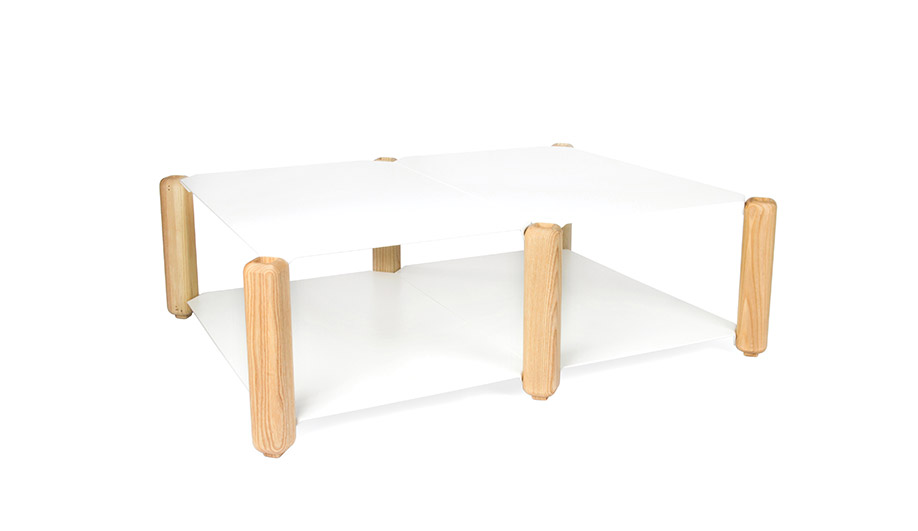 The Heavystock shelving system, from Esaila, was Knauf and Brown’s first licensed product.

Calen Knauf: We met skateboarding outside the Vancouver Art Gallery when we were teenagers. Conrad was taking a lot of photos, and he worked at The Foam Shop [a mattress and foam store] doing graphic design making flyers. I thought it was cool that he had a real job. I was making T-shirts with very pre-internet, graffiti-inspired designs. We fed off each other creatively.

Conrad Brown: Skateboarding was a big part of our lives; it’s the best thing ever aside from design. It’s the closest thing to flying. It’s a weird thing to do – jumping around with wooden toys making them slide on the edges of stuff, but it forces you to analyze everything around you in a different way than you would normally do.

When you’re walking around, the lens you see the world through is either aesthetic – you see a building and you like it or not – or navigational, where you’re looking for landmarks to situate yourself. But with skateboarding there’s this extra dimension. You’re studying the smoothness of the ground, potential obstacles. It’s very tactile. You get into the habit of looking at things critically in your day-to-day life.

CK: You also start to notice the patterns in how things wear down and get destroyed, like your shoes. The first trick everyone learns is to make the board jump with you. And then you notice your shoe getting worn out on top. You think it never touches the board, and then you realize it does because you’re rolling your ankle. You analyze things and you say, OK, now I know where the hole is coming from in my shoe. That’s a skill you now have that other people don’t, and it translates to everything.

CB: You can look at a pattern and reverse-engineer it to understand what’s happening, where it came from. Some things require a little detective work, but you are able to see how things break down, which most people don’t ever have to deal with.

Left: The Florist Chairu2019s simple form is made from birch plywood. Right: IIn 2014 Knauf and Brown staged the Micro Studio live design session, where they used material offcuts to create impromptu prototypes, including these rubber-and-marble vessels.

CB: We started out making skateboarding videos and show flyers, and then Calen got invited to participate in an art show in Portland that Nike sponsored. It was a collaboration with a toy company where they invited young creatives to make something out of these vinyl figures.

CK: They were like two-headed robot gorillas. I cut them up and fibreglassed them together into a side table, a lamp, and a coffee table. The lamp was a guy with a lampshade for his head; the side table was two guys cut in half – sort of amorphous, dripping fibreglass figures. Conrad made a flyer for the exhibit and took photos and documented it.

CB: We both studied at Emily Carr, and our first product license was in our third year there. Calen had an ugly fibreboard T.V. stand that broke, so we decided we should design a better one. We made the Heavystock shelf, shot it, and sent it around to different magazines and blogs. Esaila saw it, and that was it. The Profile Chair was designed around the same time and was licensed the next year by Souda.

CK: We always start with drawings. We sit together, extrapolating from and adding to each other’s sketches. Once we have a clear idea of what we want to do, we go our separate ways; I make the physical model, and Conrad does the digital one. Then we can look at the rickety cardboard-and-foam model and at the sleeker digital version and mesh the two images together in our minds.

We try to find utility in beauty, and beauty in utility. Like the Standard Lamp – it’s made of copper not because it’s a trendy material, but because it conducts well. The shades are leather, so when they sit in the cup and bump against each other, they don’t get marked or crack. The base is heavier than the top (for balance) and is made of wood so it doesn’t conduct electricity when the copper pieces are passing through the holes in it. But [the lamp] also looks beautiful – even though all those things are done for utilitarian reasons.

CB: Currently we’re working on a new sandwich shop for our friend and neighbour, a garbage man whose dream was to open a sandwich shop. We’re doing this semi-industrial outdoor cable-hung lighting that is inspired by the lighting in Gaoler’s Mews here in Vancouver’s Gastown neighbourhood. We wanted to give a sense of being in a sneaky little alley in Chinatown. The space should express its real nature. We want it to be interesting to look at, but not a spectacle.

CK: Since the Heavystock shelving was not actually marketed as a T.V. stand, I’d like to design a purposeful T.V. stand. A lot of people hang their T.V.s on a wall, but I think it’s hard to watch from that angle. Also cable organization hasn’t been perfected yet; we could give that a go. Maybe even a two-in-one washer/dryer. Making something complicated is easy. Making something simple is hard.

The Heavystock shelving system, from Esaila, was Knauf and Brownu2019s first licensed product.

SHARE
Twitter, Facebook, LinkedIn, Pinterest, Email
TAGS
Personalities, Product Design, Q&A,
AZURE is an independent magazine working to bring you the best in design, architecture and interiors. We rely on advertising revenue to support the creative content on our site. Please consider whitelisting our site in your settings, or pausing your adblocker while stopping by.