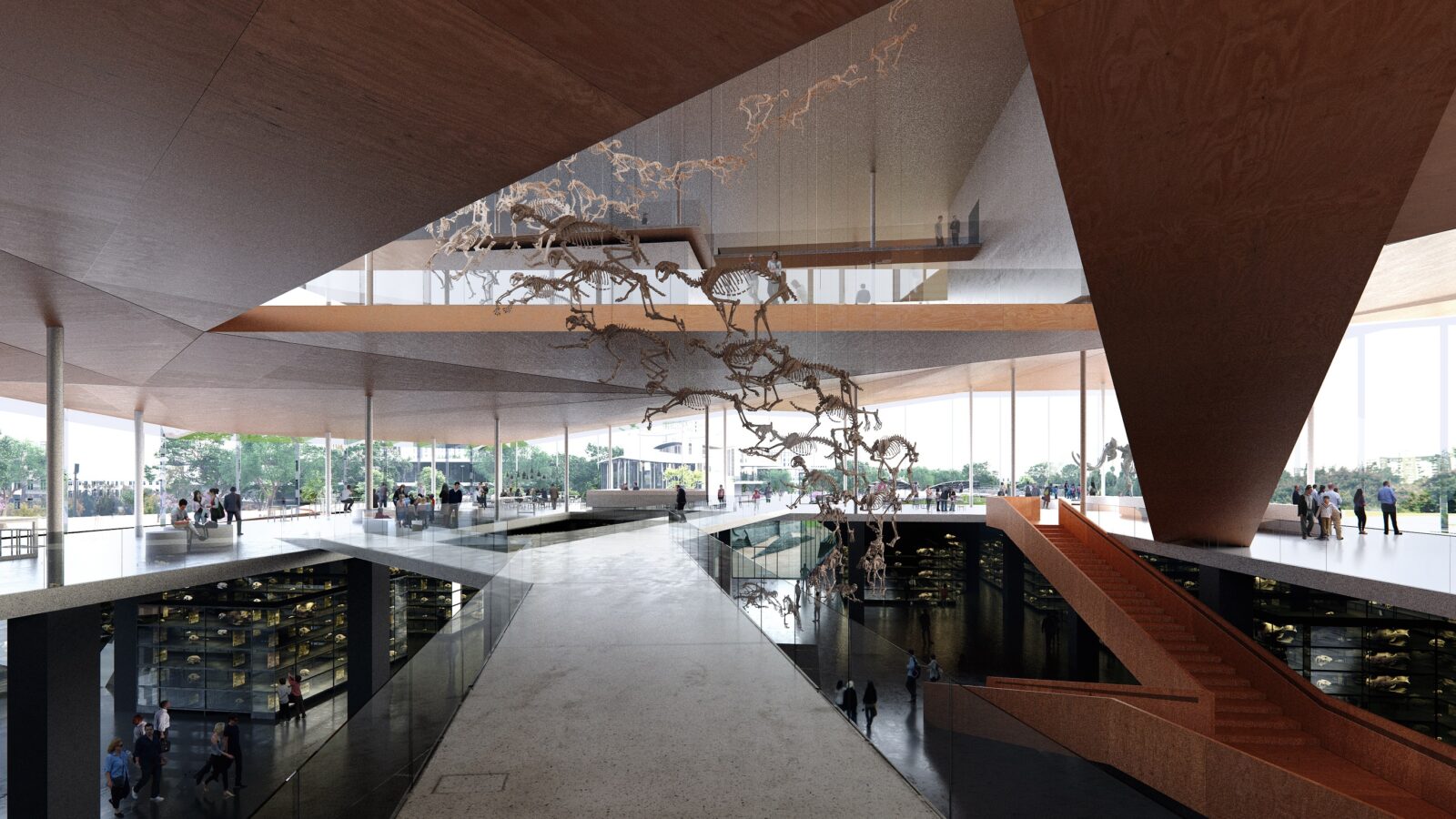 The Future of La Brea Tar Pits in Three Visions

Earlier this year, digging crews working on the Los Angeles subway extension in the Miracle Mile district made a pretty rad discovery. Tunnelling to create stops for La Brea and Fairfax Avenues and La Cienega Boulevard, they unearthed more than 500 Ice Age fossils, including saber-toothed cats, ground sloths and mammoths.

Could there be a starker juxtaposition of past and present? The uncanny proximity between present-day L.A. and the Pleistocene era is what has made the La Brea Tar Pits such an attraction since the dig site first opened in 1913. Situated in Hancock Park, it’s a living laboratory ­– the only active paleontological research facility located in a major urban area; you can see scientists polishing dire wolf bones in a tent right next to the still-bubbling asphalt pools and head into the Page Museum to immerse yourself in a mind-expanding timeline.

I’ve been to the Tar Pits on numerous occasions with my niece (she’s a born-and-bred Angeleno and the one who first told me about the subway discovery) and perhaps because of that, I’m also fond of its enduring kitsch – namely, the fibreglass statues of giant ground sloths and the iconic mastodon family. But much of Hancock Park and the 42-year-old museum – ingeniously designed by Los Angeles architects Frank Thornton and Willis Fagan as a building that burrows into the earth and features, as its crown, a fibreglass frieze of Ice Age wonders by sculptor Manuel Paz – leaves much to be desired when it comes to creating a cohesive experience.

With discoveries like the one by the L.A. Metro, and Hancock Park’s own continuous yields, the museum is in dire need of expansion. And at a time when world leaders can casually dismiss climate change, seeing the science of our changing planet in action is increasingly important. So, in March 2019, the Natural History Museums of Los Angeles County (NHMLAC) invited a select group of architecture firms to assemble teams – featuring designers and artists as well as scientists and engineers – to reimagine the 4.85-hectare La Brea Tar Pits. The three chosen teams (none of them L.A. firms) are led by Copenhagen’s Dorte Mandrup, New York’s Diller Scofidio + Renfro and, also from New York, Weiss/Manfredi.

Recently, they revealed their master plan proposals. “All three submissions offer fascinating ideas for creating a more robust and engaging visitor experience while enhancing the Tar Pits as a destination and cultural hub that inspires wonder in our natural and cultural worlds,” Dr. Lori Bettison-Varga, NHMLAC President and Director, said at the unveiling. The trio of grand schemes – with a winner to be selected by the end of December – put the wonder of science front and centre.

Perhaps the most visually dramatic aspect of Dorte Mandrup’s proposal is the creation of a “foyer” elevated on stilts to float above the original Page Museum. Featuring a roof garden, the foyer would bring the park and the tar pits inside via generous glazing. “The building should be interwoven with the public park, visible, open, inviting, exciting, informal and accessible for everyone,” the architects explain. They call for opening the park and museum up to create “one big living laboratory,” so that as soon as you step into Hancock “you become immersed in the story of the Tar Pits….Our hope is that this will bring visitors much closer to the world of natural science, and in turn heighten their understanding of the past, present and future of our planet.” 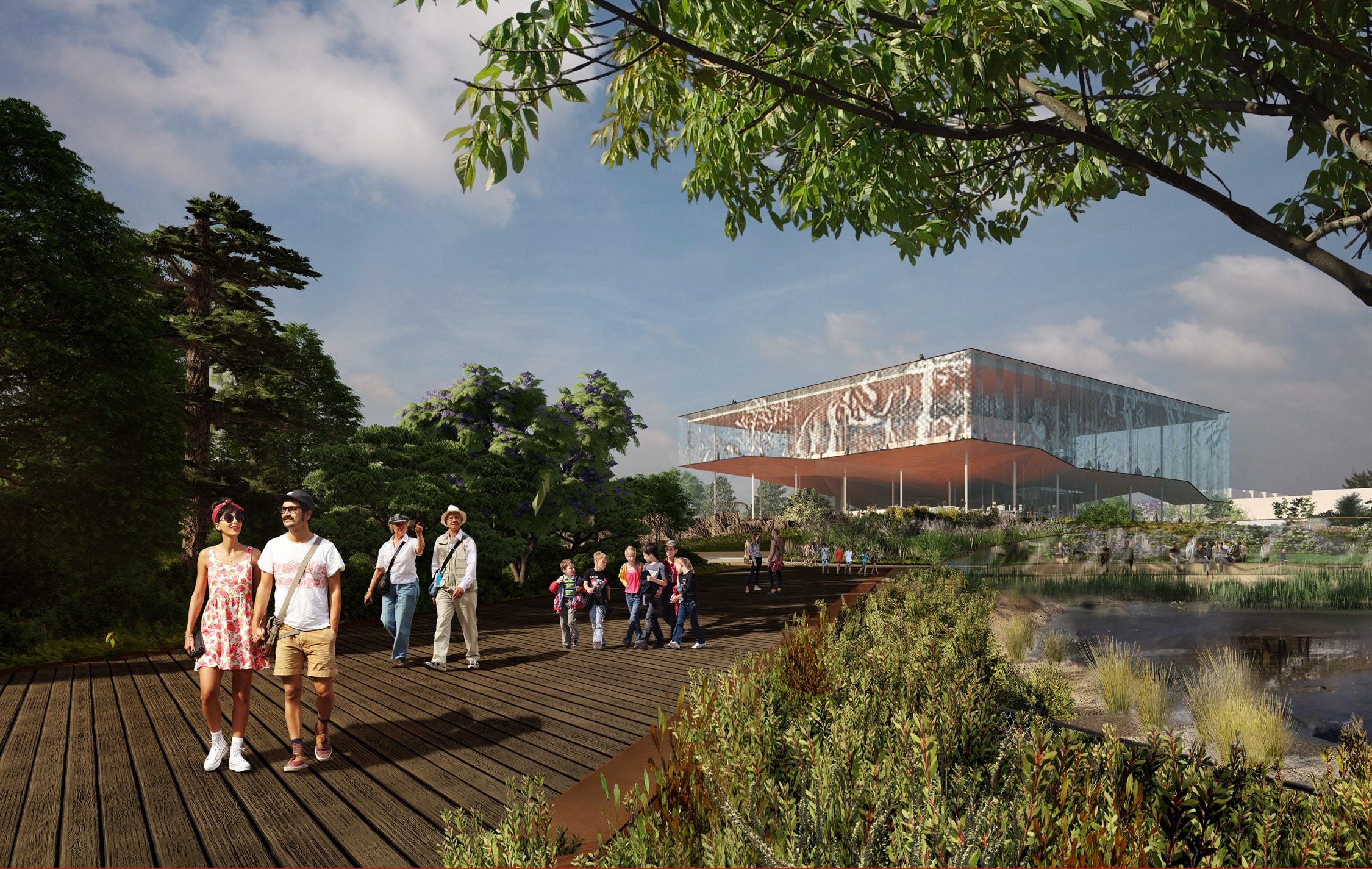 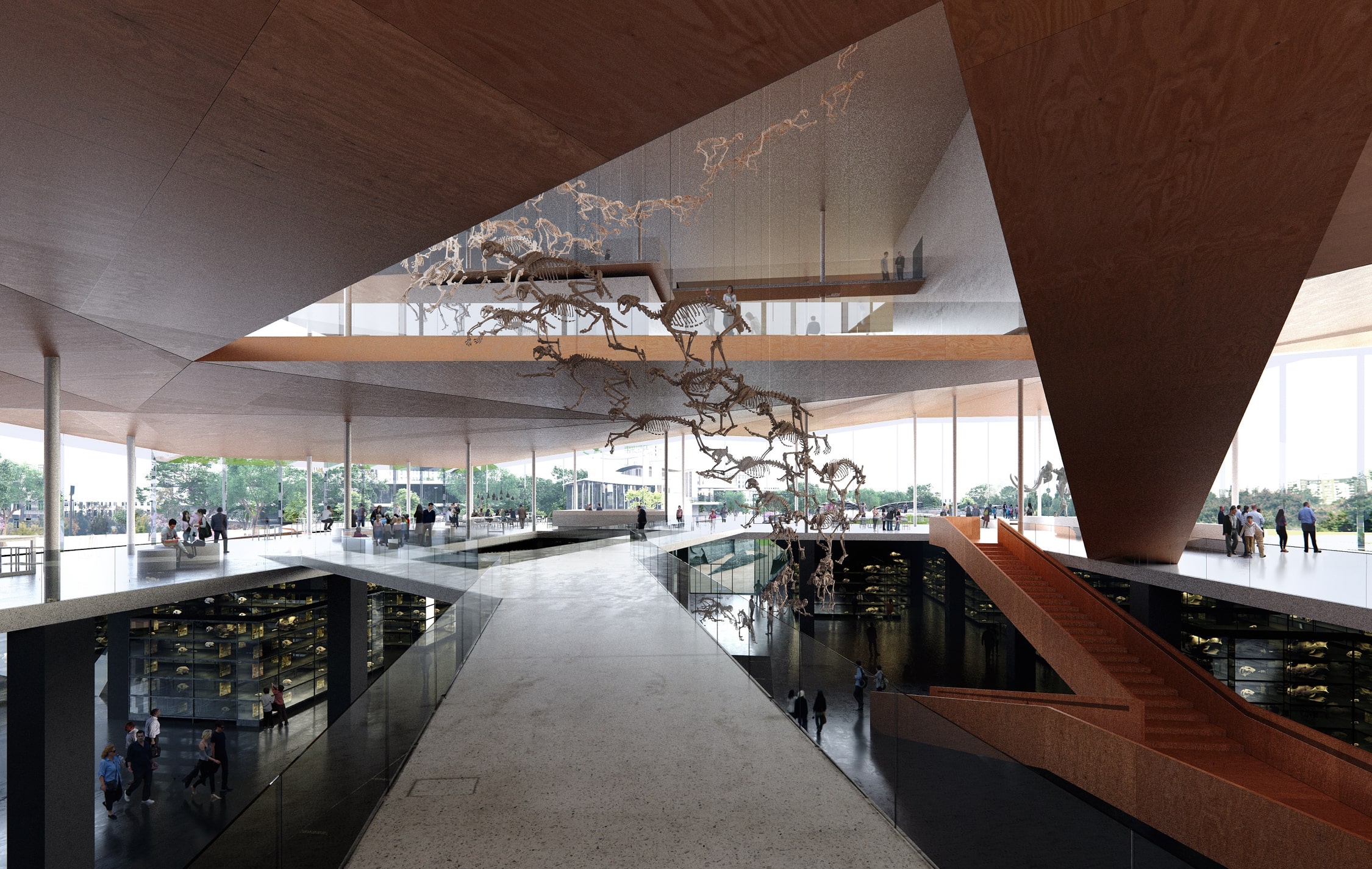 DSR’s design would see the Page Museum sheathed by a “dynamic set of landscaped plates” that would provide visitors with multiple points of entry. Inside, a multi-tiered glass cube – called the “archive block” and filled with archeological finds – would float at the centre. This volume would be wrapped by a public circulation route featuring galleries that ascend to a tar bar at the very top. The masterplan would connect the site to the larger city district, and provide something called a Mobile Dig Rig “designed to anticipate current and future digs anywhere in the park.” 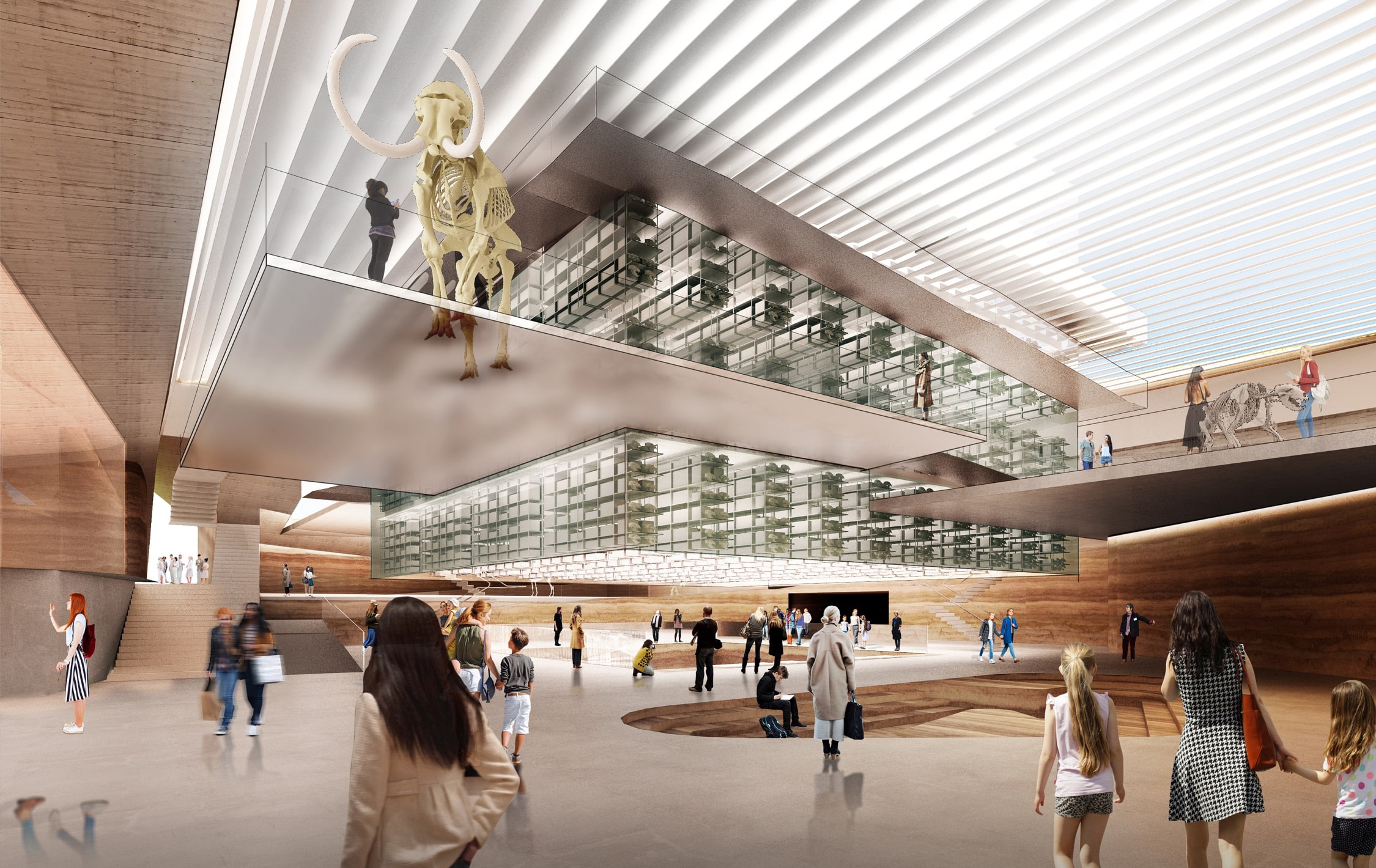 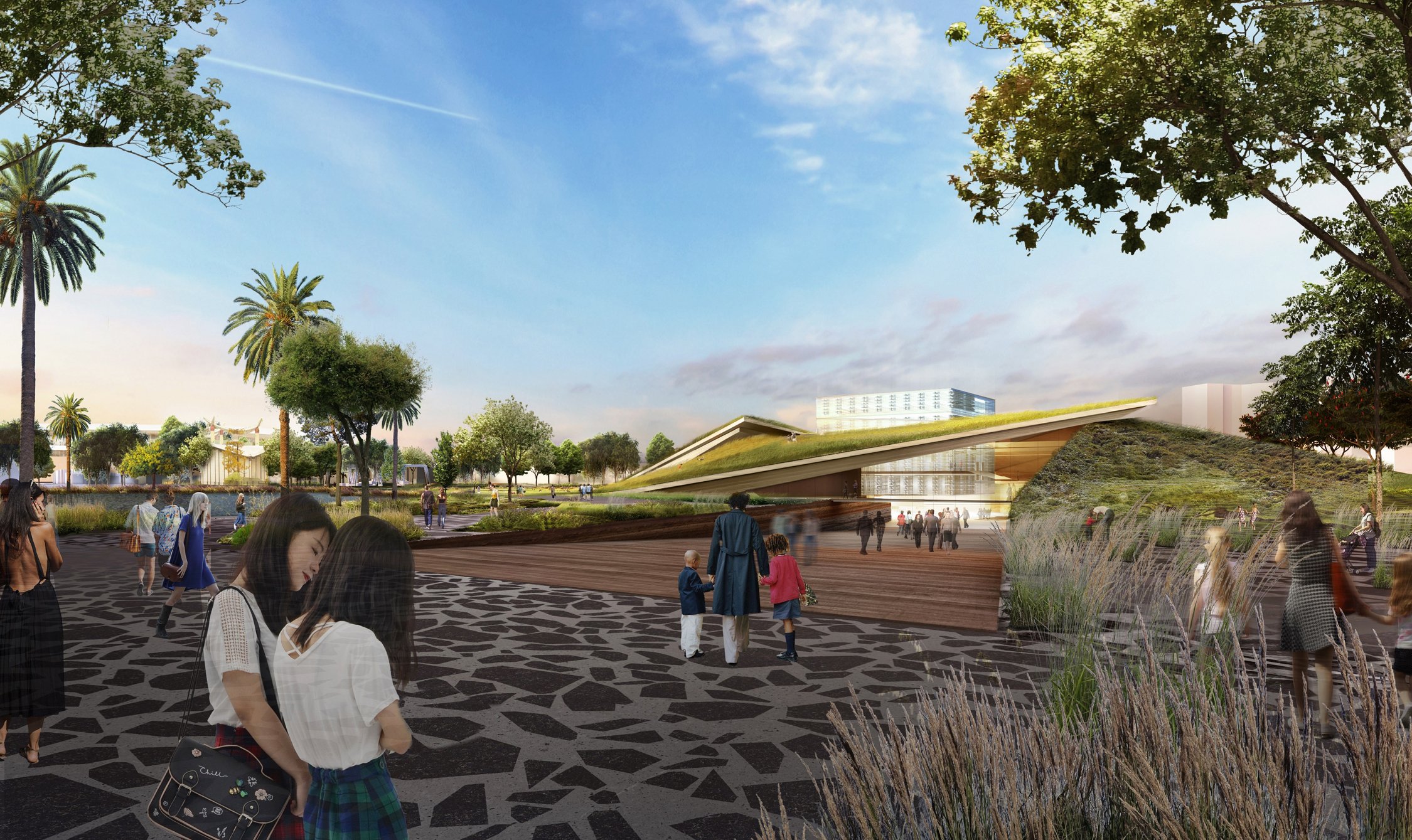 Perhaps the most ambitious of all, Weiss/Manfredi’s plan centres on the idea of connecting the park landscape and the museum programming with a triple möbius to “redefine Hancock Park as a continuously unfolding experience, connecting three distinguishing identities that are latent within the park today: Research and Revelation – the site of the excavation pits and Pleistocene Garden; Community and Culture – where the museum and central green are located; and Spectacle and Urban Fictions – where the lake pit and mastodons join the public imagination on Wilshire Boulevard.” In their renderings, the Page Museum seems mostly undisturbed (though the plan calls for its “rejuvenation and expansion”) and proudly stands in its current footprint. 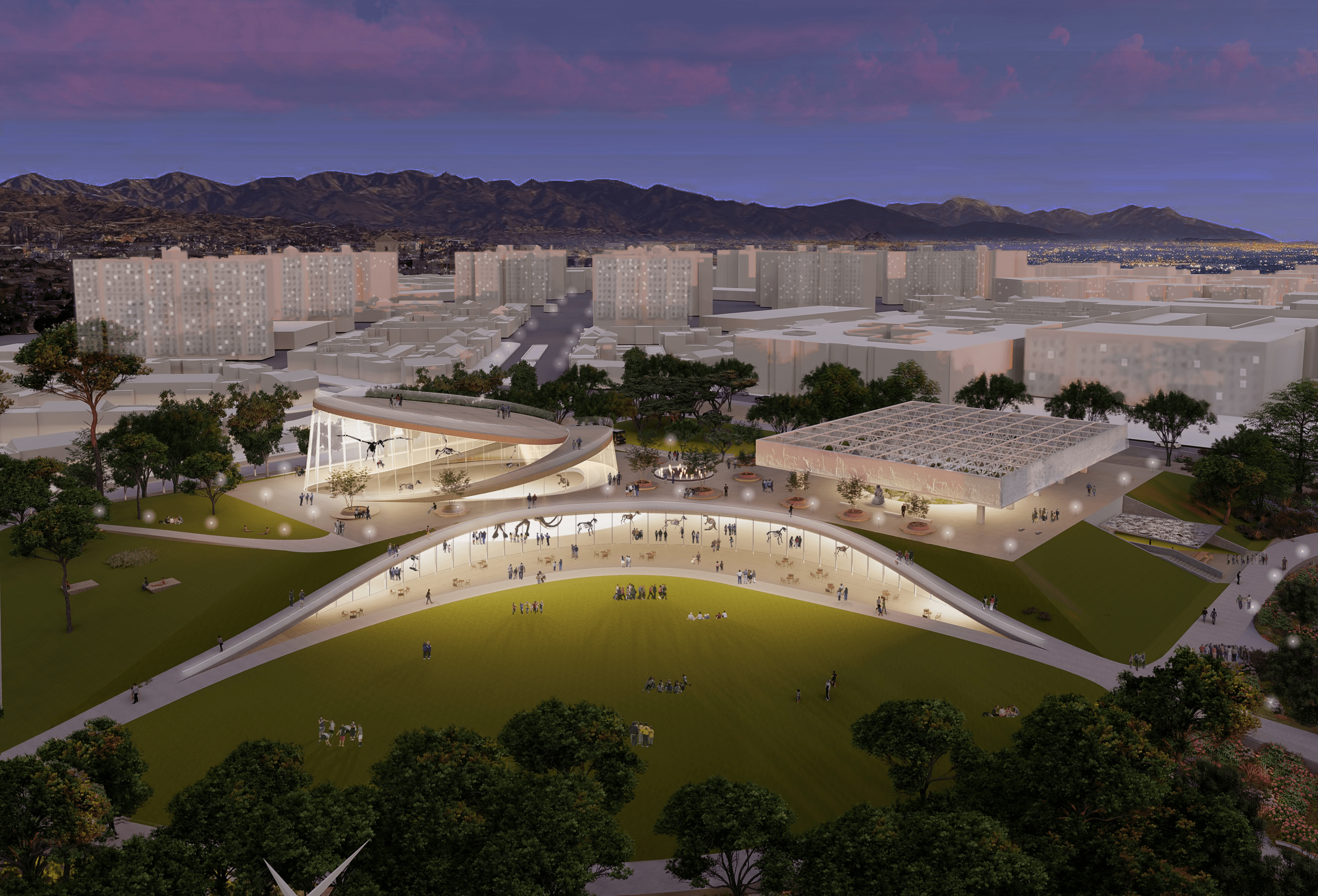 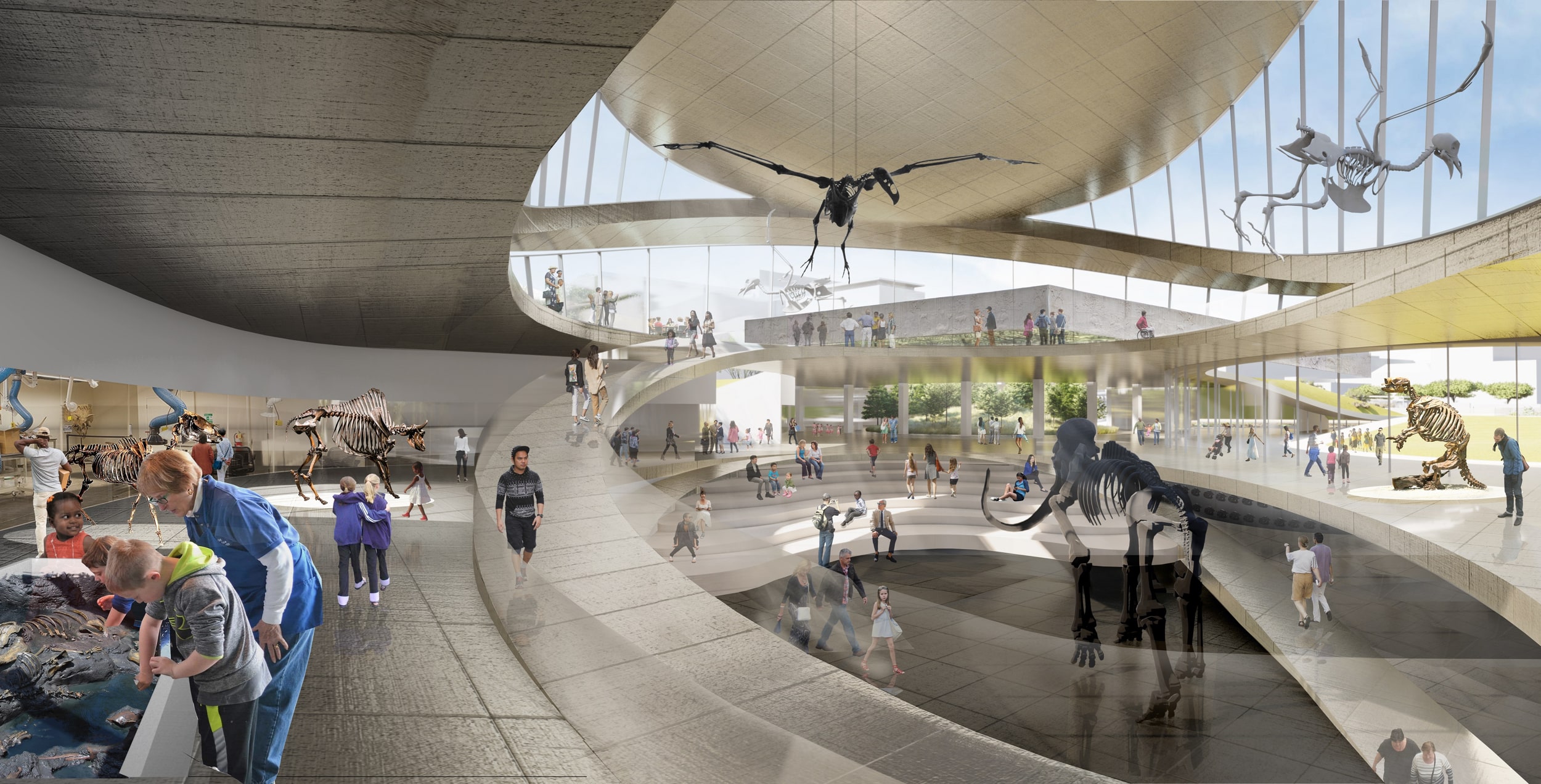