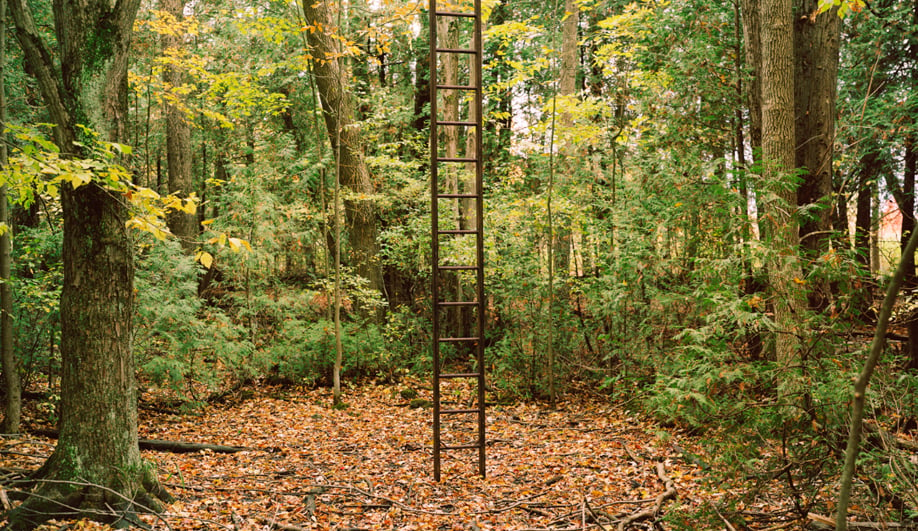 Amongst these new arrivals is a stalwart: the 128-year-old Gladstone Hotel. And the old kid on the block has been drinking the kale Kool-Aid long before the area’s juiceries started bottling it. Each year since 2013, Grow Op – the hotel-slash-gallery’s urbanism, landscape art and contemporary design exhibition – presents works inspired by our relationship with both urban and natural environments. 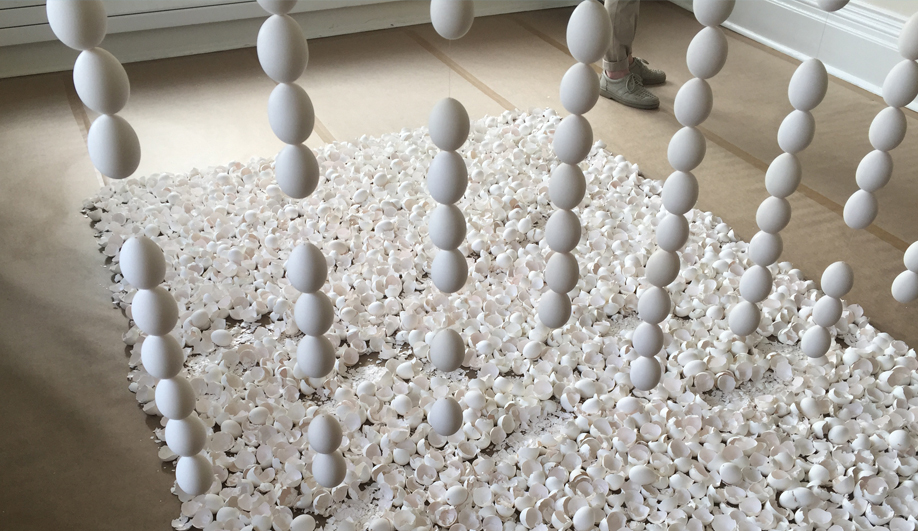 The fifth edition of the exhibition encompasses more than 30 projects selected by Gladstone director of exhibitions Lukus Toane along with green-thumbed architects Christine Leu and Alan Webb of design firm LeuWebb projects. The collection of thoughtful works includes everything from Magdalena Miłosz and Michelle Hunniford’s beaded curtain made of egg shells (who knew: today’s hard-working hens lay twice as many eggs as their 1916 counterparts) to Julie Gladstone‘s canopy of brilliantly painted plaster clouds being sold as a fundraiser for the David Suzuki Foundation. Below, we discuss four standout trends from this year’s show. 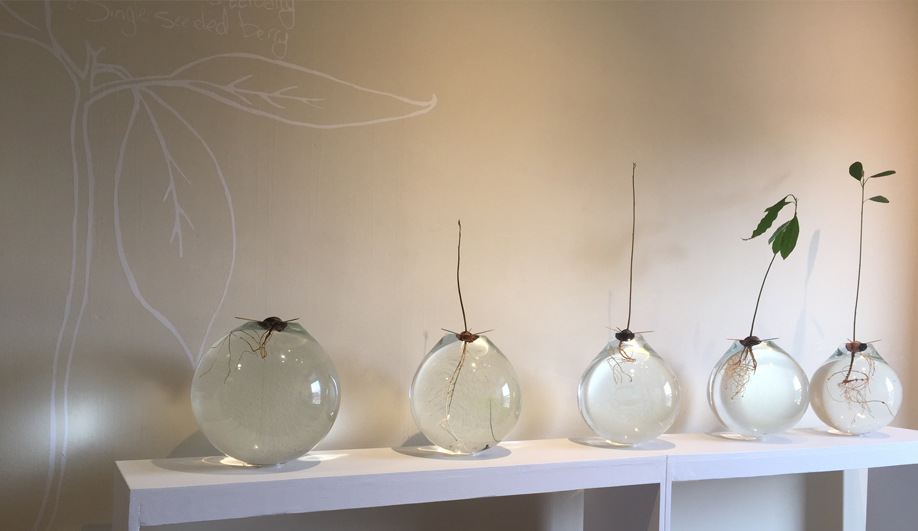 1 Unconventional houseplants
Think waiting for an avocado to ripen requires patience? Try waiting for an avocado seed to grow into a tree. The plants, which can be raised with great care from the pit of any grocery store ‘cado, take at least five years to bear fruit. In the meantime, they make for fun roommates. Glass artist Becky Lauzon has been tending to an apartment full of them for the past half-decade. She shows off her progress alongside a selection of her recent glass designs in Avocado Room. Each plant’s intricate root system contrasts gorgeously with the simplicity of her bulbous vessels.

2 Contemplative nature treks
Take a stroll through a dense forest – no hiking boots required. The striking images in Darren Rigo’s The Woods series frame rural Ontario wilderness the same way the photographer experienced it in during his youth: as a fantastical landscape that oscillates between comforting and terrifying. Visitors seeking an escape from the city should also seek out Bruno Billio’s peephole piece, which delivers a whiff of that glorious nature fresh smell that so many scented candles attempt to recreate.

Alongside these playful works are depictions of the less innocent ways we engage with the great outdoors: John Haney’s Clearcut photography series documents timberland as it is razed. 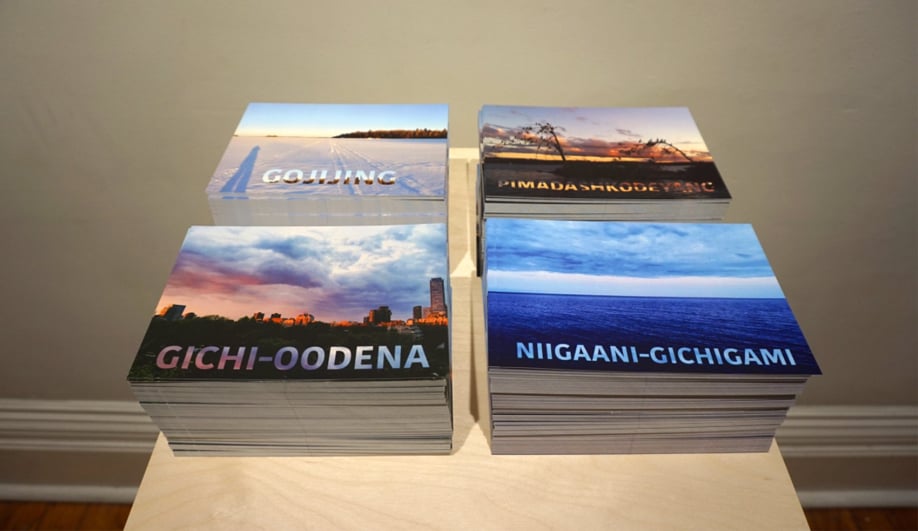 3 Examinations of the city’s evolution
A postcard can say a whole lot more than just “Wish you were here.” For Anishinaabe artists Susan Blight and Hayden King, Canadian postcards symbolize false celebrations of “empty” wilderness, and an attempt to disguise the violence that still occurs throughout the country. Created in response to this erasure, a stack of four free-to-take postcards designed by the duo emblazon images of Canada with Anishnaabe phrases. For example, a shot of the lake is accompanied by text that reads “Niigaani-Gichigami” – Anishnaabe for Lake Ontario.

Eve Gane’s photography also works to deconstruct idealized presentations of the city. In her Imagine This series, Gane shoots the hoarding put up around condominium construction sites in a way that reveals the often messy landscape that surrounds the picturesque renderings of future developments. For something slightly more irreverent, turn to Pseudostudio’s dense but humorous rewriting of city history, which re-imagines office green roofs as sites for “hermitages” – a structure popular in 18th century England that provided eclectic hermits an escape from society. 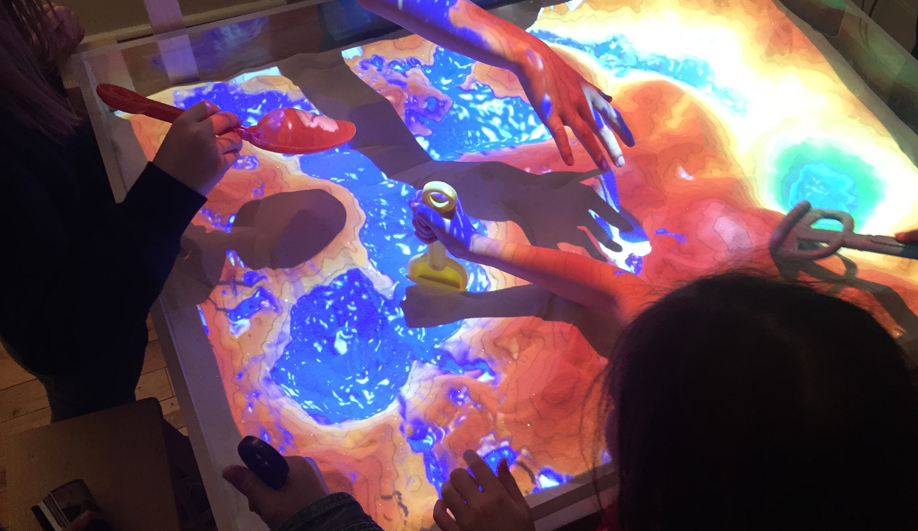 4 Futuristic fusions of nature and technology
Leave it to a teacher to make learning fun. University of Toronto lecturer Shadi Ramos’s Augmented Topography puts a modern spin on the old-school sandbox using two high-tech tools: a motion-sensing Kinect camera and a projector. As you shift around sand on her installation’s table, a live contour map beamed from above updates to reflect each sand pile’s terrain – red indicating high relief, and blue indicating you’ve dug right down to water. Apart from being a fun way to engage with this type of mapping, the work is also a lesson about the immense power we have to alter the environment with a simple dig of a shovel.

In the spirit of the old adage “stop and smell the flowers,” other installations use modern day tools to inspire a fresh appreciation for the environment. Orchestration by Lindy Wilkins and Dushan Milic is a sound piece composed by translating data recorded during a storm into musical notes. And the flashlight resting on a houseplant in Miles Rufelds’s As Stem is to Leaf video blinks out Henry David Thoreau’s “Walden” in Morse code – a cheeky reminder that we can still engage with nature without having to make a full escape from civilization.