Stripped of the Usual Trappings, this Six-Suite Hotel in Lisbon Feels More Like a Home
Santa Clara 1728 offers an intimate yet refined experience in the heart of Europe's hippest city. 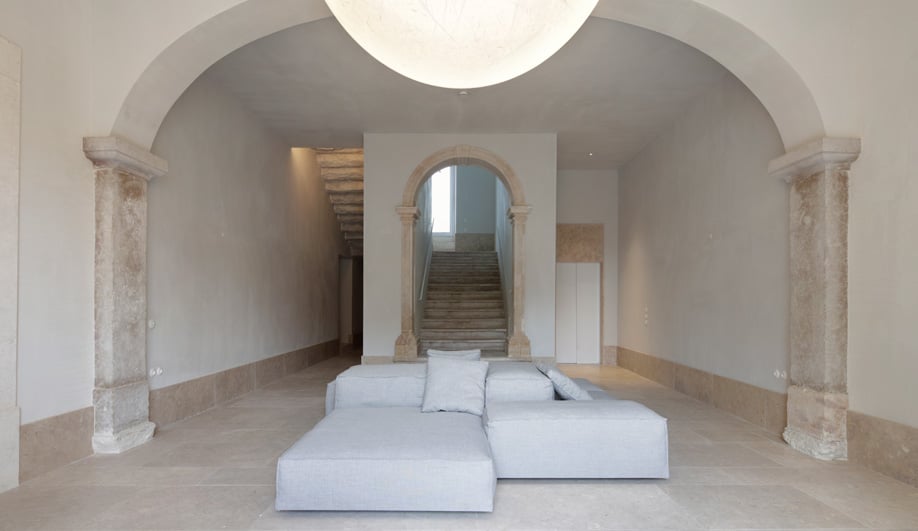 Save for a Living Divani sofa and Davide Groppi pendant, the reception area is stripped of all things “hotel.”

Santa Clara 1728 offers an intimate yet refined experience in the heart of Europe’s hippest city.

Nestled within a labyrinth of narrow streets, small squares and gracefully aged buildings in one of Lisbon’s most traditional neighbourhoods, Santa Clara 1728 is an 18th-century urban palace that has been exquisitely rehabilitated into a small hotel with six luxurious suites by architect Manuel Aires Mateus. Owner João Rodrigues, a pilot whose family lives on the building’s top floor, is an art and design aficionado who, through a series of architectural projects undertaken with Aires Mateus, has been pursuing qualities of atmosphere and sensuousness in architecture. The pair’s first experiment, Casas na Areia (Houses in the Sand), is an ensemble of small beach cabins permeated by the sand. Cabanas no Rio (Cabins on the River), a pair of wooden fishers’ huts on a river jetty, explores themes of enclosure and exposure within a vast landscape; while Casa no Tempo (House in Time) is a formerly ramshackle farmhouse, situated in a cork grove, that seeks “the essence of home.” 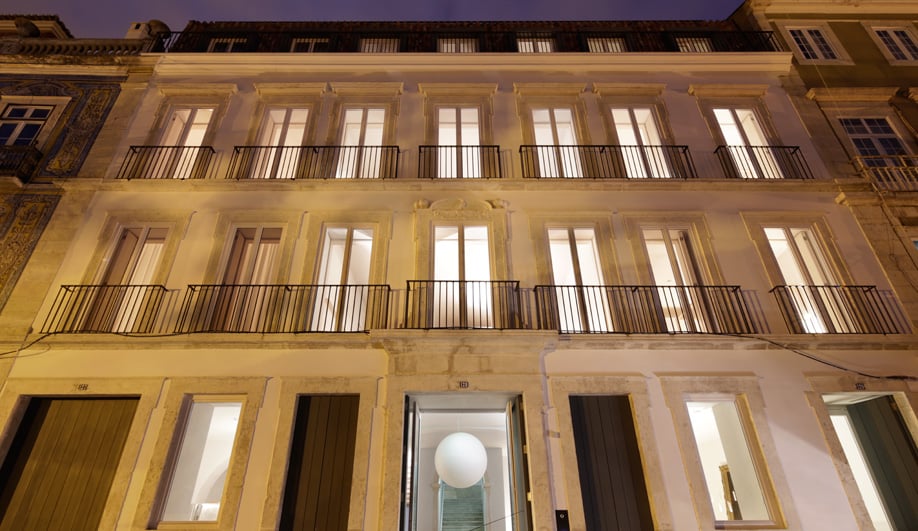 The 18th-century building sits atop one of the city’s seven hills.

Following this line of inquiry, Santa Clara 1728, the largest and most urbane of these projects, “experiments with new ways of living and experiencing space,” as Rodrigues puts it. All of the projects follow three basic principles: maximum use of locally sourced, high-quality natural materials, the employment of local craftsmen and techniques, and the exploration of an architectural idea that emerges from the location. 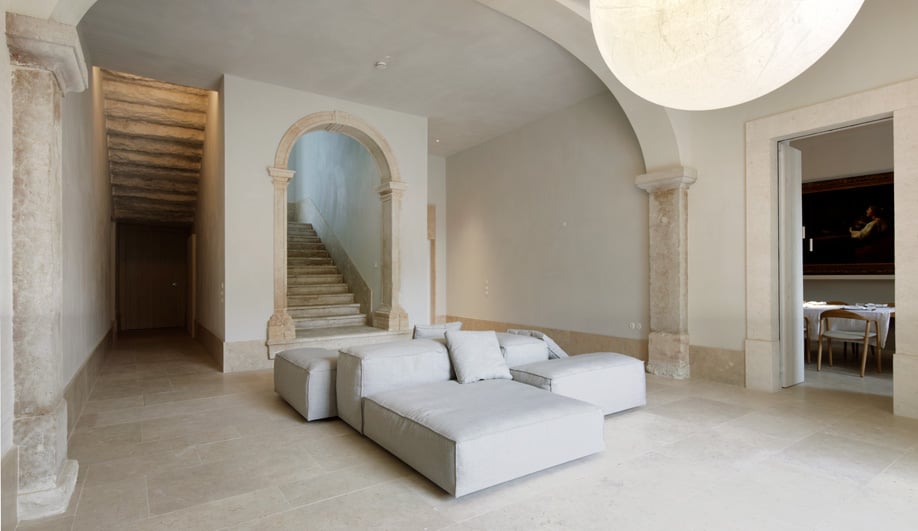 Save for a Living Divani sofa and Davide Groppi pendant, the reception area is stripped of all things “hotel.”

The first thing that is noticeable about Santa Clara 1728 is the absence of any visual reference to a hotel. There is no signage on the restored building facade and no reception desk in the entrance hall, at the centre of which a Living Divani modular sofa ensemble forms an island below a moon lamp by Davide Groppi. The dining room, instead of containing a multitude of tables, features a single, solid oak table that convivially seats 20, while an adjacent single-piece stainless steel kitchen, designed by Antonio Citterio
for ArcLinea, can be freely accessed by guests anytime. As Rodrigues explains, “This is not a hotel, but a house at which we like to welcome guests. We want visitors to feel at home.” 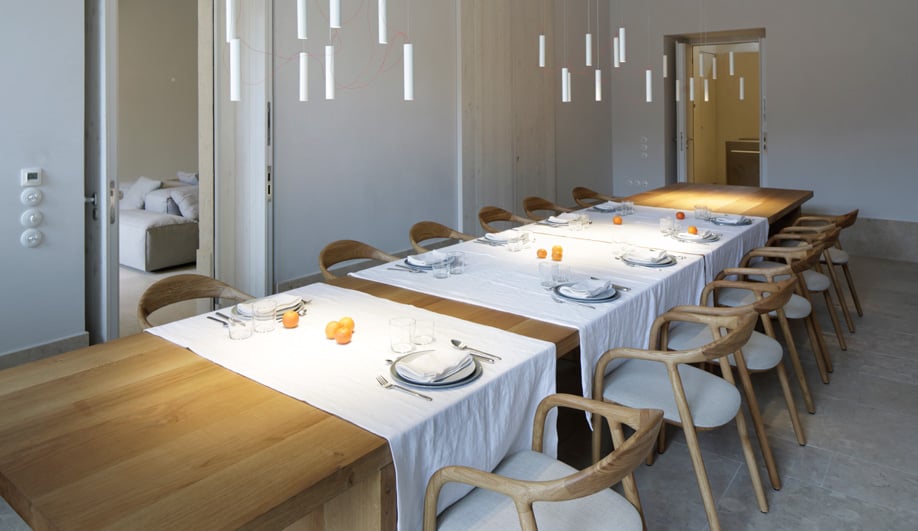 The dining room consists of a long oak table beneath Simbiosi lights by Davide Groppi.

To convey an atmosphere of home, the building has been rehabilitated such that the distinction between new and original elements is relaxed, playful and informal. While the original limestone stairway, for example, is framed by a ceremonious classical archway on the ascent, the roughly cut underside of the stair’s return segment, originally covered with plaster, has been exposed. In a similar spirit, the Baroque paintings in the entrance hall and dining room are not wall-hung, but lean at angles against the walls, suggesting a more informal, temporary art display. 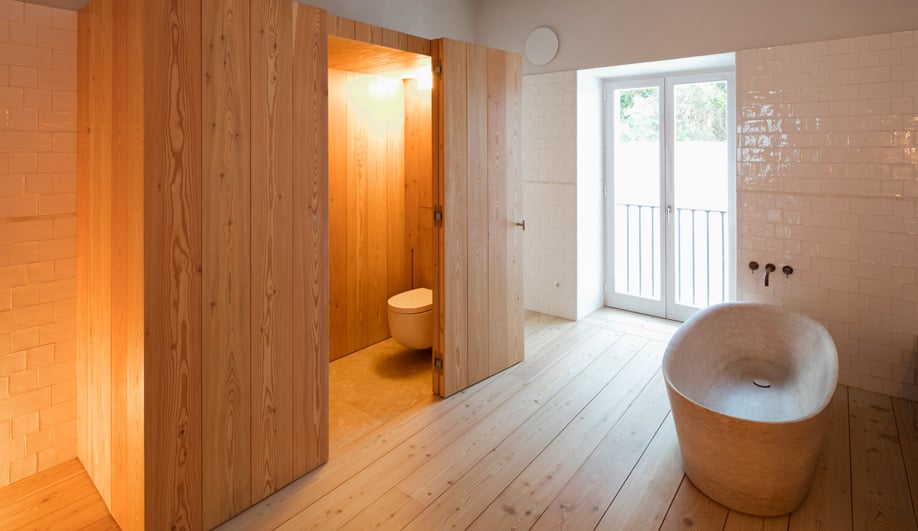 The relaxed formality of Santa Clara 1728 continues within the six generously proportioned guest suites, where freestanding storage and bathroom elements that leave walls and ceilings untouched create the sensation of a single, large space that has been subdivided in an impromptu manner. Bathrooms within the suites, for example, enclose toilet and bidet within small, Finnish-sauna-like wood pavilions. These partially conceal other fixtures but leave a solid stone bathtub exposed so that, in some of the suites, views of the Tagus River can be enjoyed while bathing.

Furnished with pieces from B&B Italia’s Maxalto collection (also designed by Antonio Citterio), the suites do away with typical hotel paraphernalia such as telephones or flat-screen televisions. The emphasis here is clearly on stunning views, natural light, the textures of natural materials, and beautiful craftsmanship. 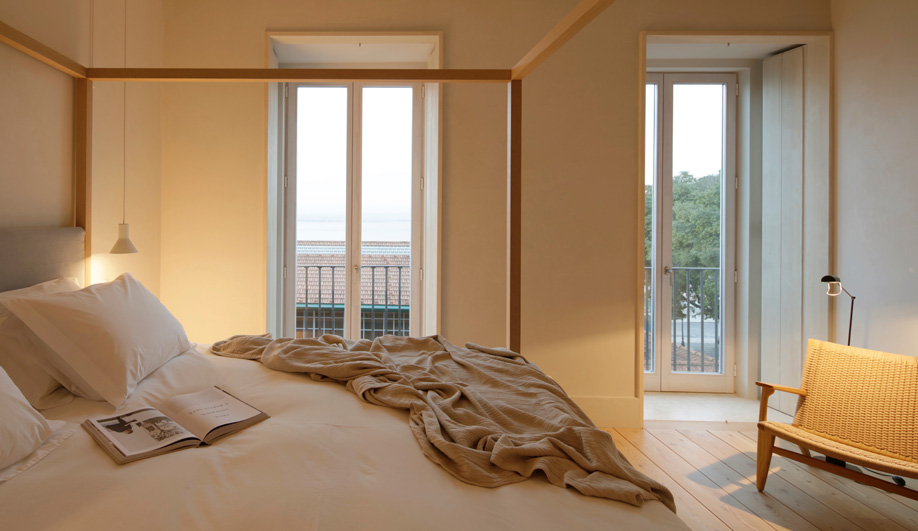 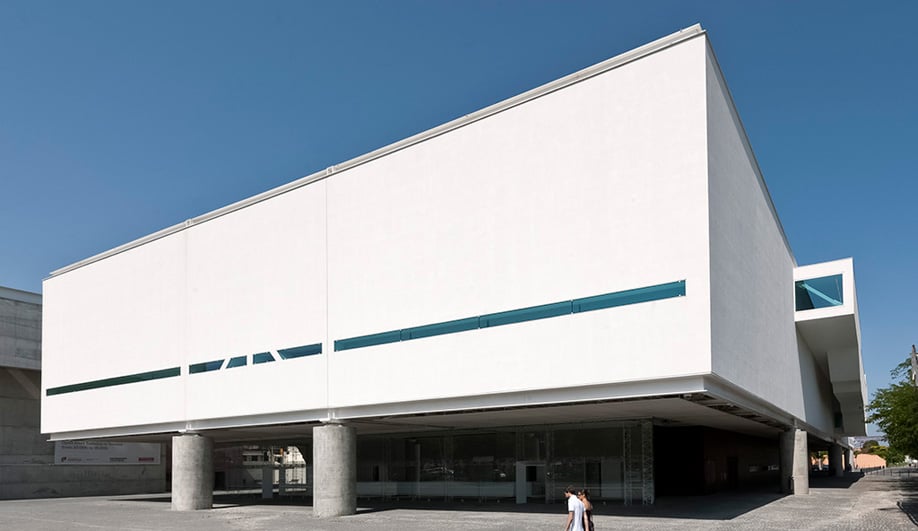 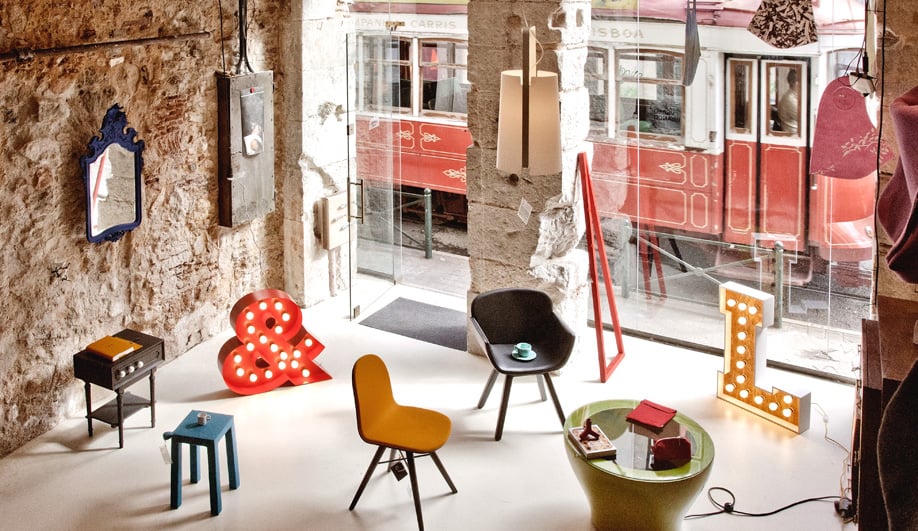 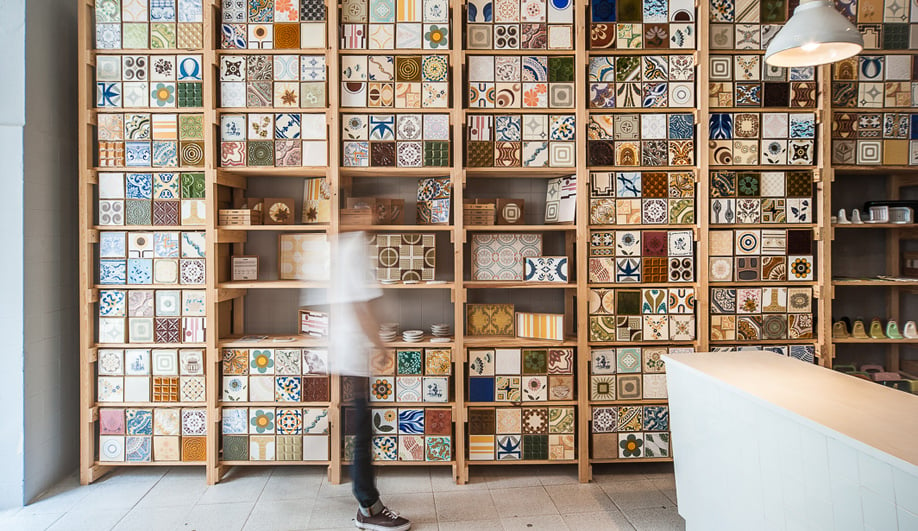 3 Cortiço & Netos
There are many places to shop for ceramic tiles in Lisbon, but Cortiço & Netos converts the display of tiles into a work of art with its simple but effective pine shelving system, crafted by the four brothers who inherited the business. 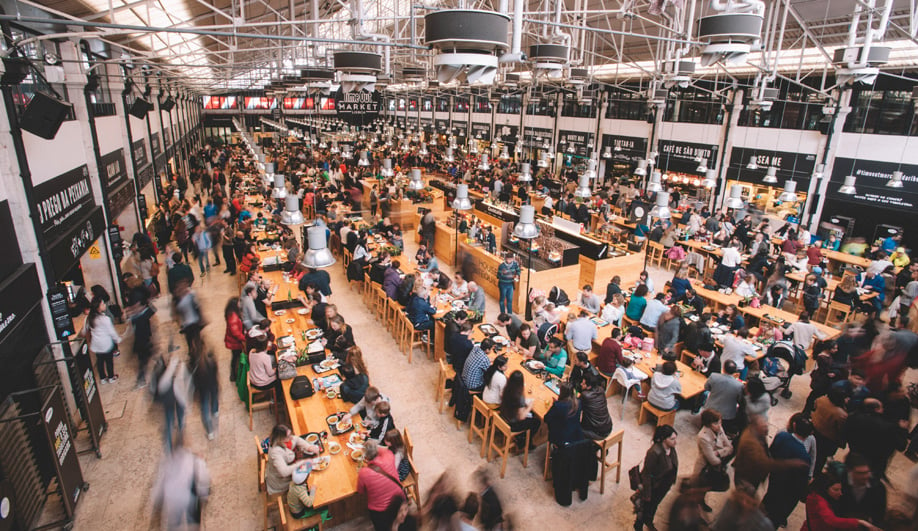 4 Mercado da Ribeira
The historic Mercado da Ribeira on the Lisbon riverfront has recently been renovated and reborn as Time Out Market, a gastronomy court that brings together two dozen of Lisbon’s diverse restaurants under one roof. The concept of this ambitious pilot project by Time Out Portugal is now being replicated by the travel and entertainment publisher in various cities around the world. 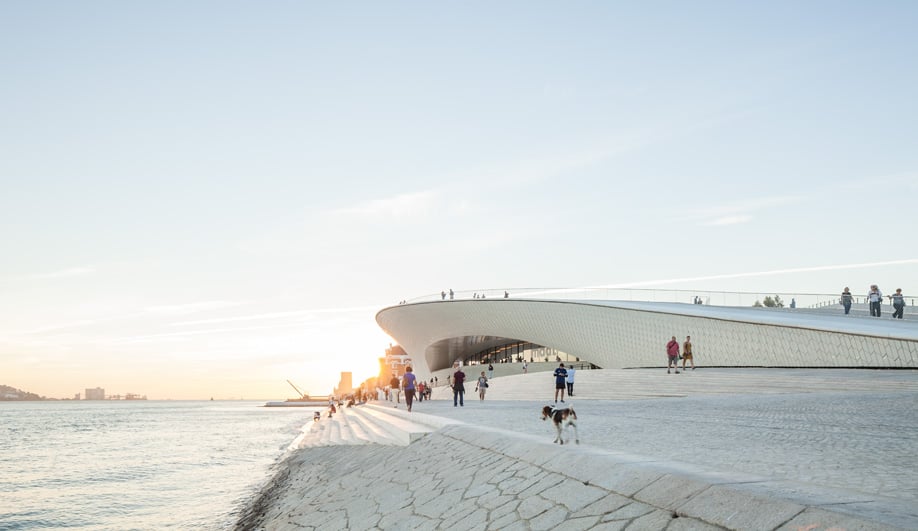 5 Museum of Art, Architecture and Technology
MAAT, the Museum of Art, Architecture and Technology, is housed in a former electrical power station in the Lisbon waterfront district of Belém. A dynamic new addition by London architect Amanda Levete fluidly rises from the ground to create a roof terrace offering spectacular views.